The Razer Ornata V2 keyboard is the new and improved version of the Razer Ornata Chroma that’s been on the market for over three years. Razer’s flagship mechanical keyboard the BlackWidow Chroma had a similar V2 model made back in 2017, but now the Ornata has taken over the moniker. The keyboard comes with the exact same Chroma RGB that Razer keyboards are known for and makes any desk a sight to behold. But does the Ornata V2 have enough new features to make it stand out, or are its upgrades not enough to compete? Here’s our review of the Razer Ornata V2 keyboard. 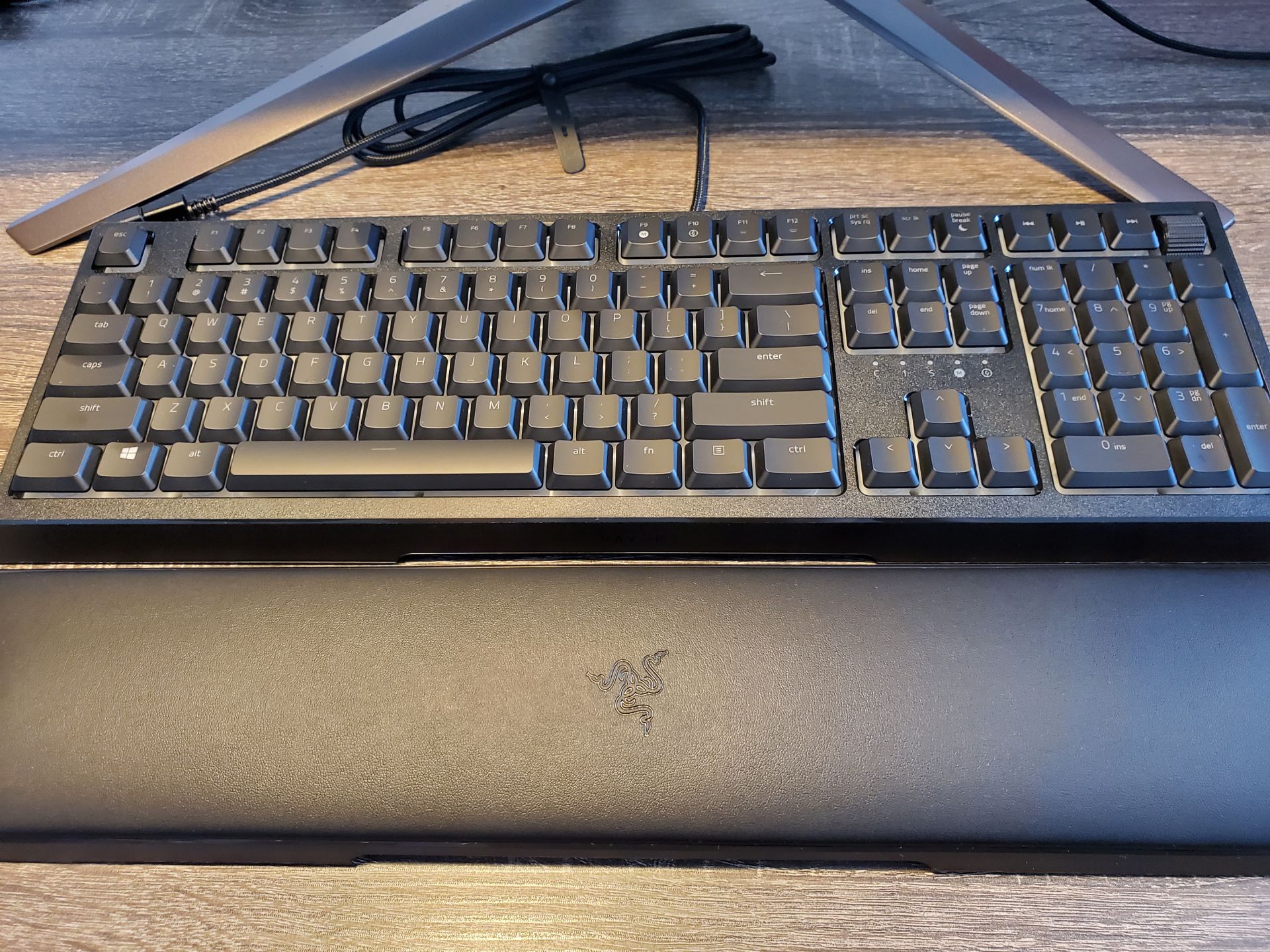 The Razer Ornata V2 features the same revolutionary hybrid mecha-membrane switches that its older siblings, the Ornata and Ornata Chroma, use. These switches combine the soft, squishier typing feel of a membrane switch with the satisfyingly clicky response of a mechanical switch. The result is a much quieter keyboard that still provides a delightful aural experience when typing.

The general aesthetic of the Ornata V2 has improved as well over the original Ornata. The placement of the lock lights for C, 1, S, M, and G that would normally be situated above the number pad are now above the arrow keys instead. This is a much more subtle way to show when any lock keys, like NumLock or CapsLock, are being utilized as well as cleared off some space above the number pad for some new keys to be added.

The Ornata V2 now features additional Media keys that have been added above the number pad: Skip Back, Play/Pause, Skip Forward, and a scroll wheel. By default, the scroll wheel is tied to volume controls but it, like every key, is customizable via the Razer Synapse 3 app. These new keys are probably the biggest upgrade in the V2 as opposed to the original Ornata Chroma. I think having dedicated volume control on keyboards is a must-have, but I also appreciate that they are customizable and can be bound to any other function. 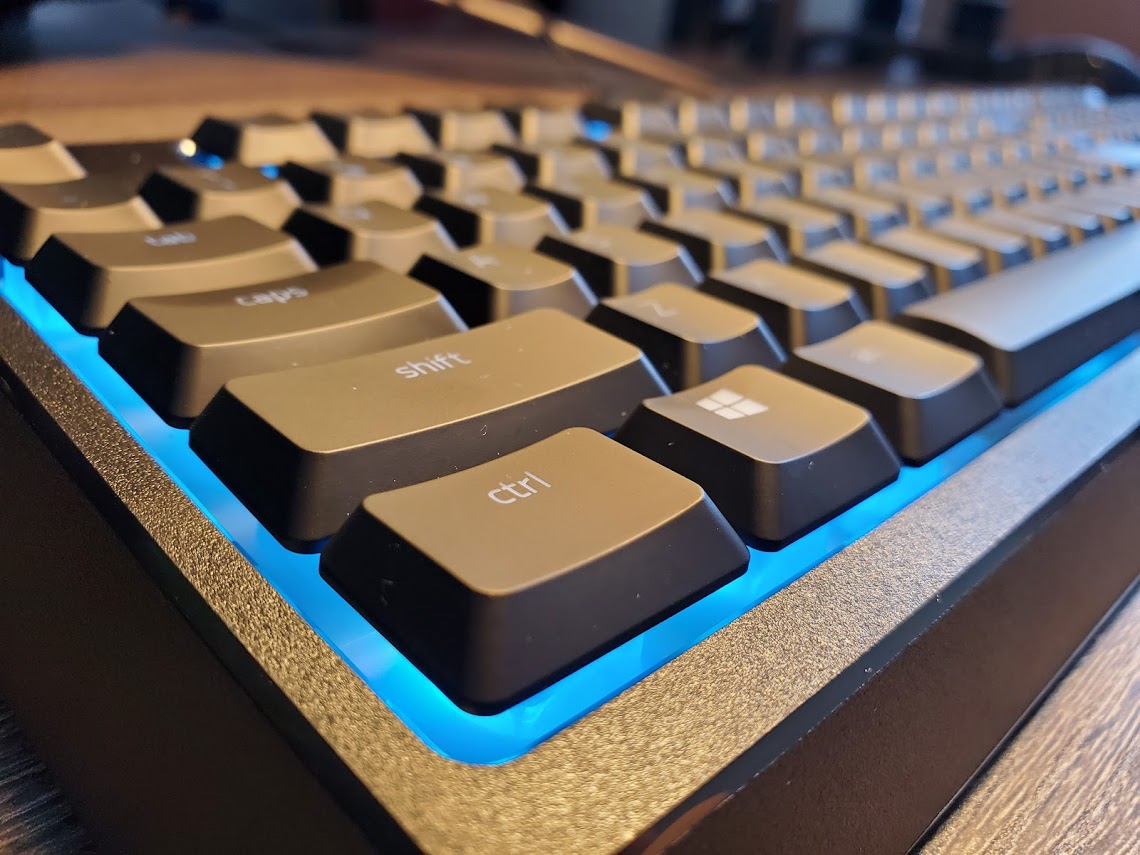 The Ornata V2 otherwise looks and feels exactly like the original Razer Ornata Chroma does. They are identical both in size and weight, the leatherette wrist rest is exactly the same, the caps are mostly interchangeable (the spacebar is different), and they have the same uniform profile. One of the only differences I was able to notice between my Ornata Chroma and the Ornata V2 is that the V2 has slightly more recessed keys. They sit just a little bit lower in the keyboard than the Ornata Chroma, which I think gives it a slightly cleaner visual style.

Otherwise, the Ornata V2 has a black, plastic frame that sits low-profile on the desk and has a professional look to it. This is a keyboard I could take to the office and not feel like it would be out of place. The foam wrist rest has a black leatherette finish that feels comfortable even after long hours of typing or gaming. Lastly, the underside of the Ornata V2 has rubber feet on all four corners of the keyboard, two different sized flip-up stands that also have rubber feet, and cable channels to guide the USB cable to the back or either side of the keyboard. The USB cable itself is a sturdy black braided cable that measures 80 inches long.

The keycaps are made of ABS plastic, which is the same as the Ornata Chroma, and pretty much what I expect in most budget-priced gaming keyboards. It’s not the most durable cap and they can feel cheap in comparison, but the Ornata V2’s caps have a matte finish on them that makes them feel just a bit more high-end as opposed to the usual semi-glossy coatings. Fingerprints can still leave an oily residue on the keys, although it's not as noticeable as if the caps didn't have the matte finish. 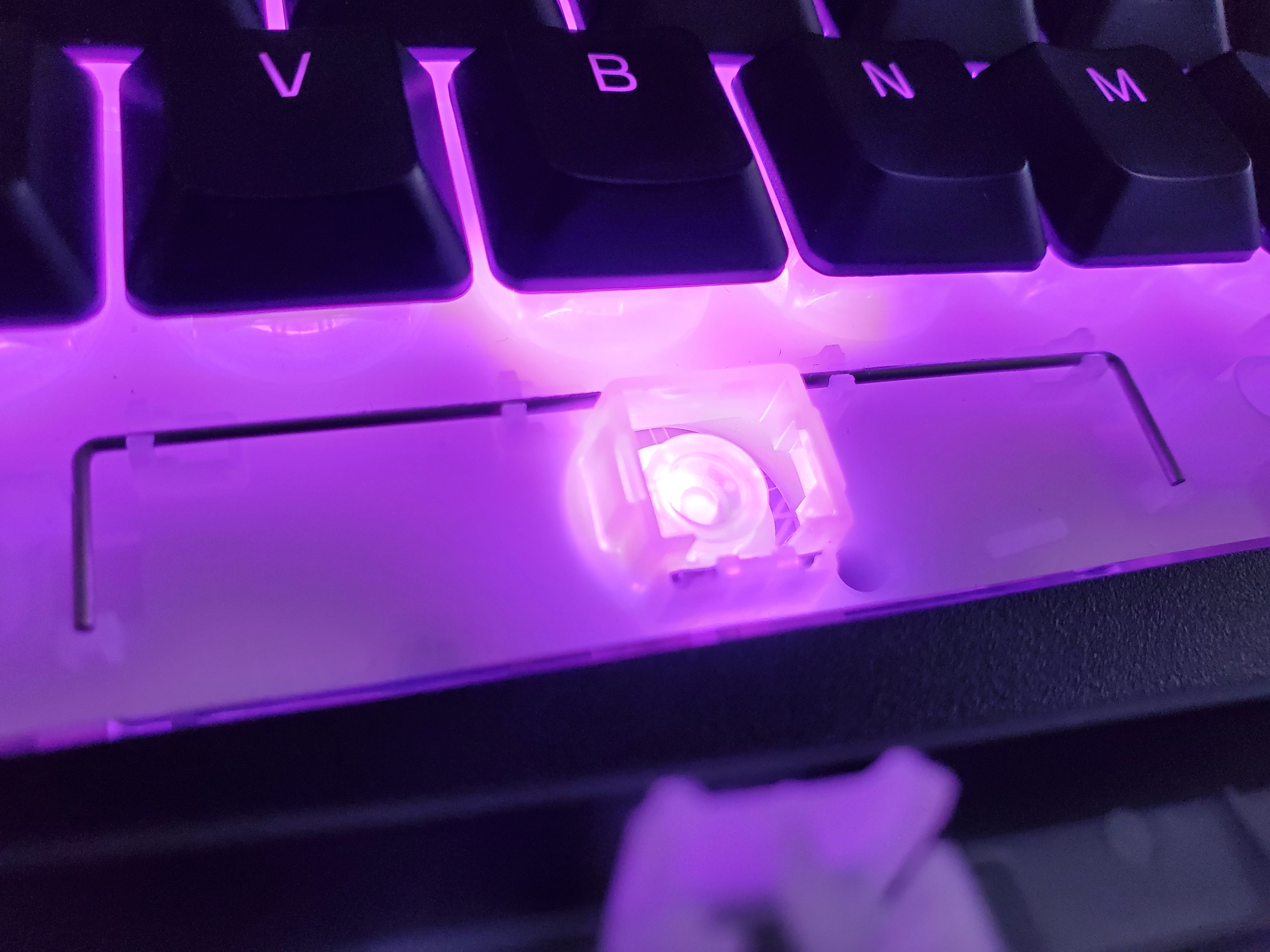 In my time with the Ornata V2, I found that the switches behaved slightly different from what I had grown accustomed to with the Ornata Chroma. For example, tapping closer to the back of the key would result in a much softer mechanical 'click' whereas tapping the front would provide that more tactile sound. The Ornata V2 in this regard feels more like a membrane keyboard.

I went back to my Destiny 2 edition Ornata Chroma to compare and see if it had the same performance with the keycaps. However, every key on my Ornata Chroma was clicky and tactile sounding, even more so than the loudest key on the Ornata V2. It seems that Razer decided to opt for either a softer-sounding membrane on the V2 or a quieter mechanical part in the hybrid switch. Either way, typing on the V2 felt the exact same as the original Ornata Chroma, so those looking to upgrade their old Ornata will find a perfect home on the V2. 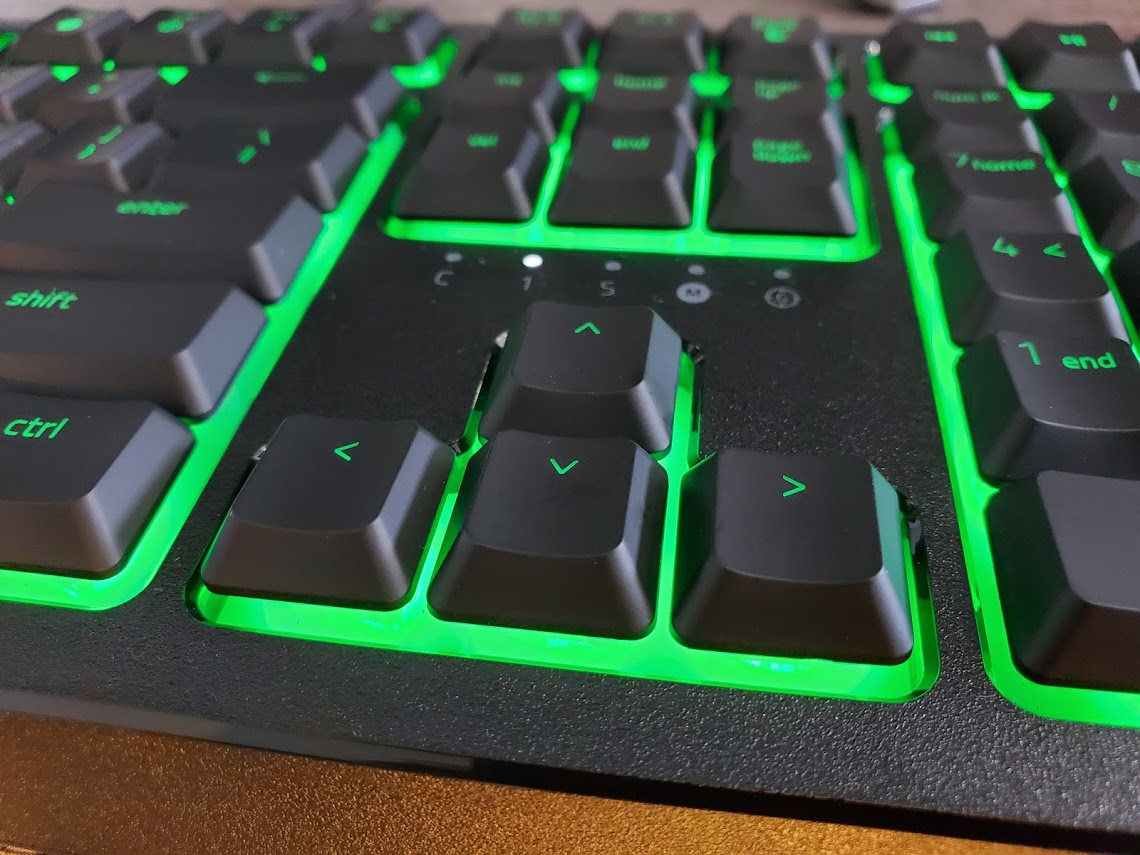 The quietness of the Ornata V2 can not be understated, however. This would be an ideal keyboard not only for streaming but for the business Zoom calls as well. Microphones would have a hard time picking up the clack of the keys on the Ornata V2, and for some that might be the biggest incentive to pick up this keyboard. Even for Twitch Streaming, I prefer a quiet keyboard over a mechanical keyboard because whenever I’m listening to a streamer and they start hitting away at their keyboard it makes me want to just mute them.

That said, I didn’t notice any problems when it came to playing games either. I tried a variety of genres to as not to exclusively use a particular group of keys, and in all of the games I played nothing stood out as being problematic with the keyboard. I played Destiny 2 to measure the responsiveness of the keys, Civilization VI to try out shortcuts, and Final Fantasy XIV to measure the full breadth and freedom of movement between keys. The Ornata V2 was designed as a gaming keyboard and, true to its purpose it performed like a gaming keyboard.

Curious to really test out my proficiency at typing, I tested the Ornata V2 on a free typing test website. For comparison, I also used my mechanical keyboard which has been my primary keyboard for the past six months. Curiously enough, my average words per minute hung around 84 WPM with the V2 but I had wide gaps ranging from 60 WPM to 100 WPM. My mechanical keyboard (probably because of my familiarity with it) had a more consistent 90 WPM and pretty much never deviated. More interesting, my accuracy with the V2 was higher on average than my mechanical keyboard. So, I couldn’t type as fast on the V2, but I was more accurate in my typing. 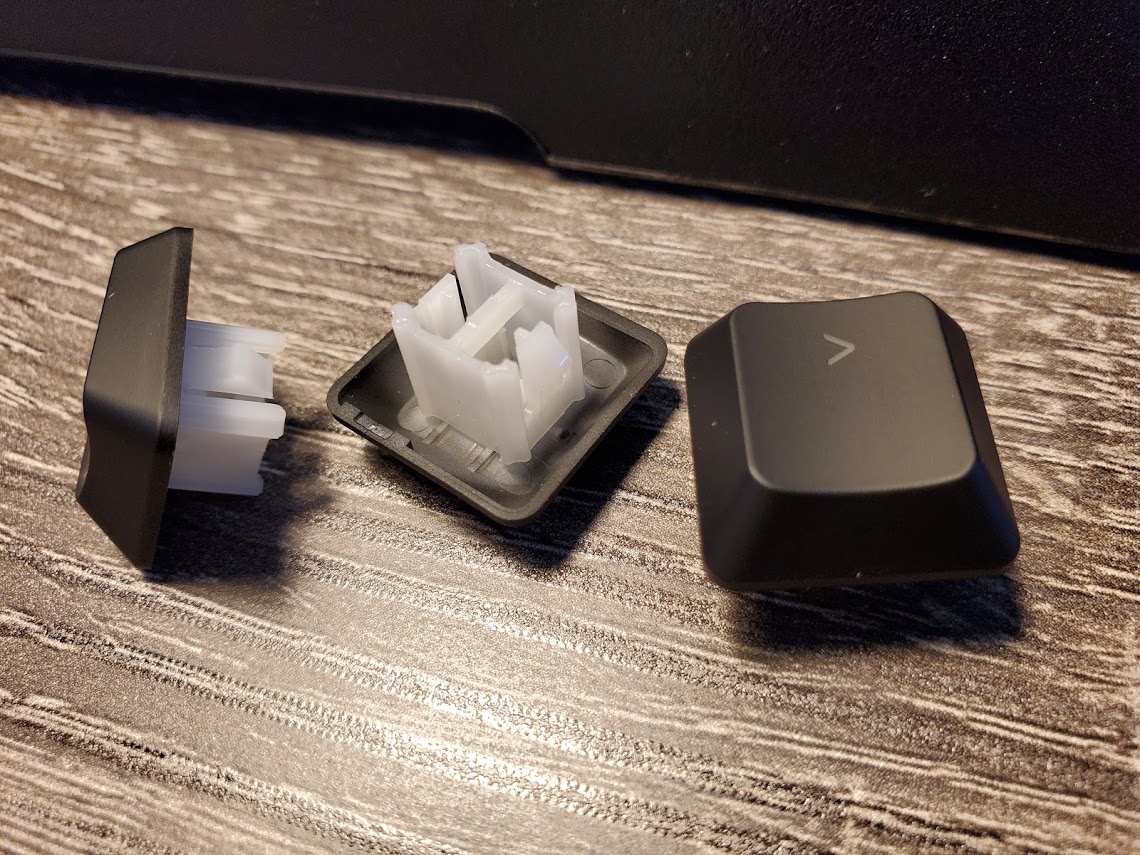 There are a few design choices that I personally miss having on the Ornata V2 that I have grown accustomed to on other keyboards. One feature I’m disappointed didn’t get included is a USB passthrough. It’s extremely convenient to have a USB port directly on the keyboard itself for quick and easy access. It is my go-to for plugging in controllers or charging my phone real quick when I’m sitting at my desk. The lack of that passthrough was glaringly obvious during my time testing the Ornata V2.

Second, because of the mecha-membrane hybrid switches, the Ornata V2 is not compatible with third-party keycaps. I'm really jealous that other keyboard enthusiasts I know are able to customize their keys more expressively, and have the ability to swap out their all-black finish stock keycaps with those sweet, sweet-looking pudding keycaps. The low profile of the V2's mid-height keycaps already give the illusion of having pudding caps, but it doesn't allow for as much light to pass through from the RGB lights inside the board. By comparison, an open-frame keyboard shines brighter.

My favorite feature in all of Razer’s keyboards is the capability to customize the RGB Chroma settings and create custom macros via the Razer Synapse 3 software. This tool offers some of the most in-depth and customizable settings possible on an RGB keyboard. By default, there are 11 Quick Effects for lighting that can be easily selected, including Spectrum Cycling, Ripples, and the new Ambient Awareness which matches the keyboard to the colors present on-screen.

The Synapse 3 app also allows for full-on customization of every individual key. For example, since I don’t listen to music on my PC I changed the Ornata V2’s new media keys from Skip Back and Skip Forwards into Alt+Tab and Alt+Shift+Tab so that I could more easily tab between different applications I had running. I think Razer has the best software when it comes to personalizing and customizing RGB lighting effects, and the quality of life features it has like setting up individual profiles and linking games to specific profiles that automatically switches when that game starts up are fantastic. Having those features are some of my personal reasons as to why I prefer Razer keyboards above most others. 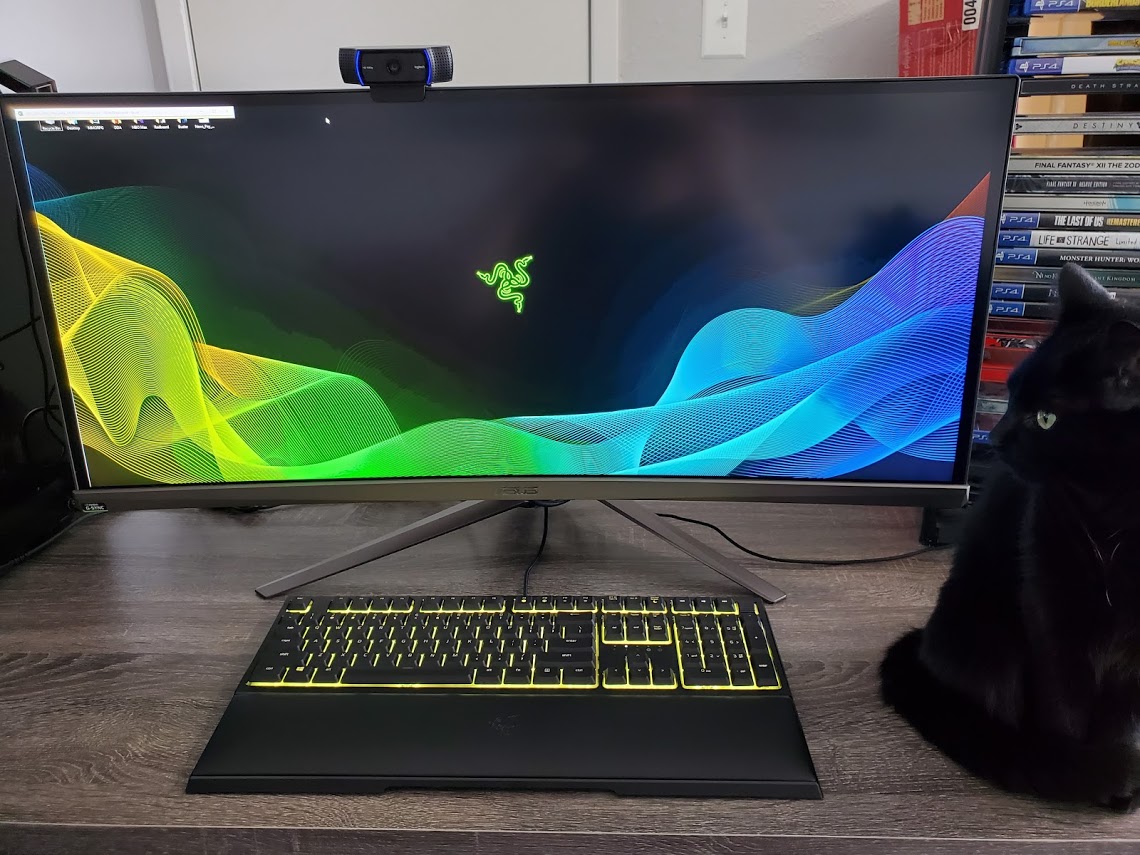 Overall, I enjoyed my time with the Ornata V2. I think the media keys are a much-needed addition to bring the Ornata more in-line with other premium keyboards, and the scroll wheel is an added bonus that I personally believe every keyboard should have. The ability to quickly reach over and hit the scroll wheel to mute my game when my wife comes in to ask me something is an invaluable asset. However, I was slightly disappointed that the mecha-membrane switches aren’t as mechanical-sounding as the ones on the Ornata Chroma, but I think this was a conscious design choice to reduce the noise while still retaining that satisfying 'click' feel to the keys. Owners of the original Ornata will be happy to upgrade to the V2 and still retain the quiet mechanical duality of the mech-membrane switch.

The lack of a USB passthrough hurts the Ornata V2 in being competitive in a crowded market. The unique keycaps also mean you can't easily replace them with something more customized like some sweet pudding caps to bring out the RGB lighting more. But the Razer Synapse 3 functionality and the overall sleek design of the keyboard make it a good budget gaming keyboard without sacrificing too much or appearing ostentatious. There might be better keyboards out there for around the same $99.99 price tag, but it's a tradeoff between features that really comes down to what you value more and what you want your keyboard to really do.