The Razer Kraken V3 Pro is the latest entry in the Kraken line-up. This new Pro model is now slimmer and lighter due with a redesigned industrial look and features brand new haptic feedback first seen in the Nari headsets. Add in the same great 50mm Tri-Force Titaniums found in the original Kraken V3 HyperSense and the Razer Blackshark and you have a reinvented experience to breathe new life into the venerable Kraken. Are all these changes worth upgrading to the Pro? Let’s take a closer look and find out!

The Kraken has been a fan favorite since its original inception. It’s only fitting that it continue to evolve over time. With each iteration, Razer has pushed itself to update the technology and provide added features while continuing to improve on its already popular sound. In 2021, Razer showered extra love on the Kraken line-up, borrowing fan-favorite features from some of their other headsets and adding new upgrades with the Kraken V3, V3 X, V3 HyperSense, and finally, today’s new release, the Kraken V3 Pro HyperSense. 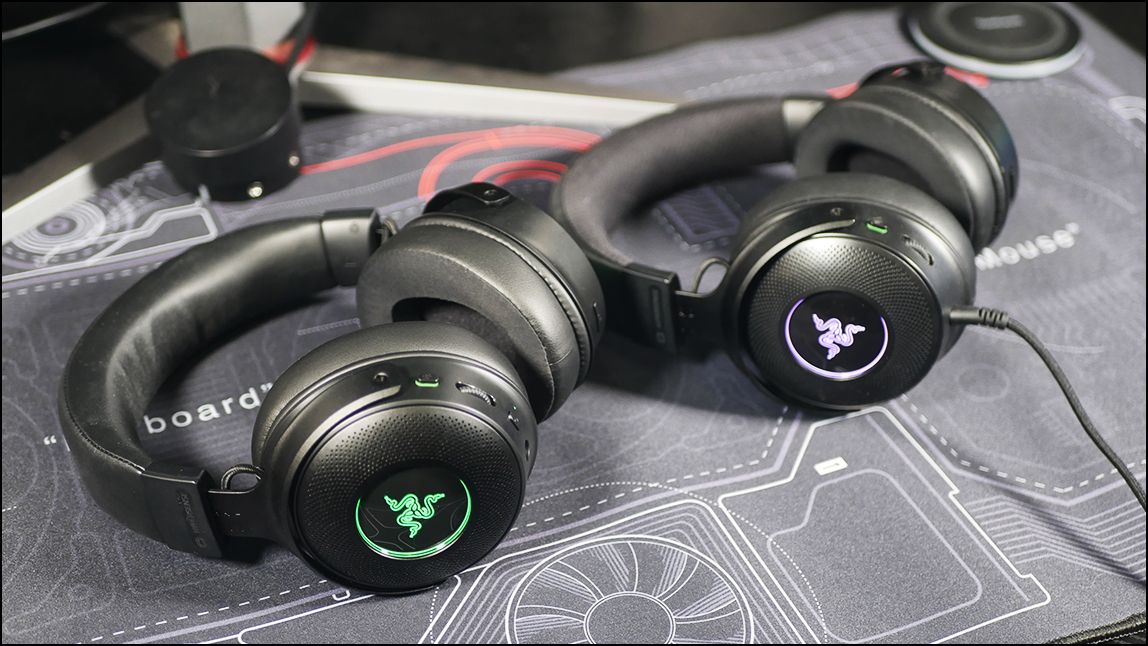 Let’s first start with the burning question that has plagued gamers alike for decades, what makes a product “Pro?” Based on the word alone, you would expect more features and improved sound to warrant the extra cost. And you would be right. While it would be easy to assume that this is just one more sea monster, it’s worthy of its place at the top of the Kraken line-up.

The series has been a staple in the esports industry for years: over-ear, noise isolating cushions, powerful yet compact audio drivers, and lest we forget, a design that’s made to be stylish without being garish. The redesign we see here slims the headset down but maintains its DNA: there’s no question that this is a Kraken headset. The slimmer design feels more modern and in keeping with the times.

Weighing in at 368 grams it does feel a bit heftier compared to that of the V3 HyperSense variant. Often increased weight does exhibit a sense of being more premium, and that’s the case here. The steel-reinforced construction through the headband and even the yolk feels durable while being flexible. History has shown me that this is often one of the first points to fail on gaming headsets, so I’m happy to see smart use of metal here. Keeping with tradition, Razer has provided the same adjustment notches on each side to better fit a range of head sizes. The clamping force on the Pro has increased by a small margin to ensure that it stays firmly in place through its haptics, but doesn’t isn’t uncomfortable. In fact, the whole headset is well balanced, so the added weight really isn’t all that noticeable when you’re actually wearing it. 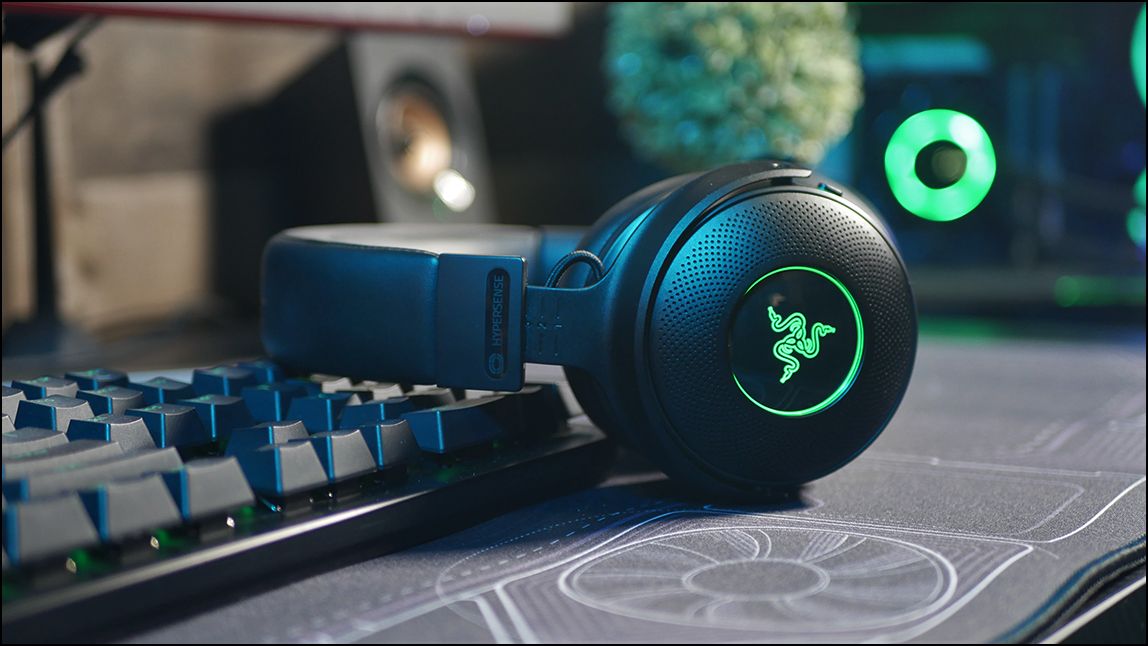 Of course, the Pro would not be a Pro if it did not offer noticeable advantages over the V3 HyperSense. The highlight here is Razer’s HyperSpeed wireless tech which allows you to cut the cord without sacrificing instantaneous audio or sound quality. It works impeccably and maintains a steady connection, even at a distance. While I did not often have to travel past 15 feet, I was able to maintain a solid audio connection at more than 25 feet — at least for what you can hear. The mic had issues if I walked too far from my PC, but this seemed to be related to my PC as changing ports cleared the issue up.

Sonically, it’s a performer. Razer has equipped the Kraken V3 Pro HyperSense with the very same 50mm Tri-Force Titanium drivers originally introduced with the Blackshark line and that are also found in the standard V3 HyperSense. They’re excellent for gaming, delivering solid positionality and spatial awareness for competitive games and immersive single-player games alike. I started my review process by testing out the experience with Dying Light 2, GS:GO, and Doom Eternal. In each test, I was able to accurately detect the positioning of other players and mobs alike. This is super important as it provides an immersive awareness that increases accuracy and enemy avoidance.

Swapping to music, it also delivered an enjoyable experience. It’s bass-heavy but detail rich, which I found to be a balanced and fun experience, especially with HyperSense. It’s also important to note that you can customize the sound with presets or by adjusting your own 10-band equalizer. The accompanying software (Razer Synapse, of course) also allows you to enable bass boost, sound normalization to level out peaks and valleys, and enhance the clarity of vocals. 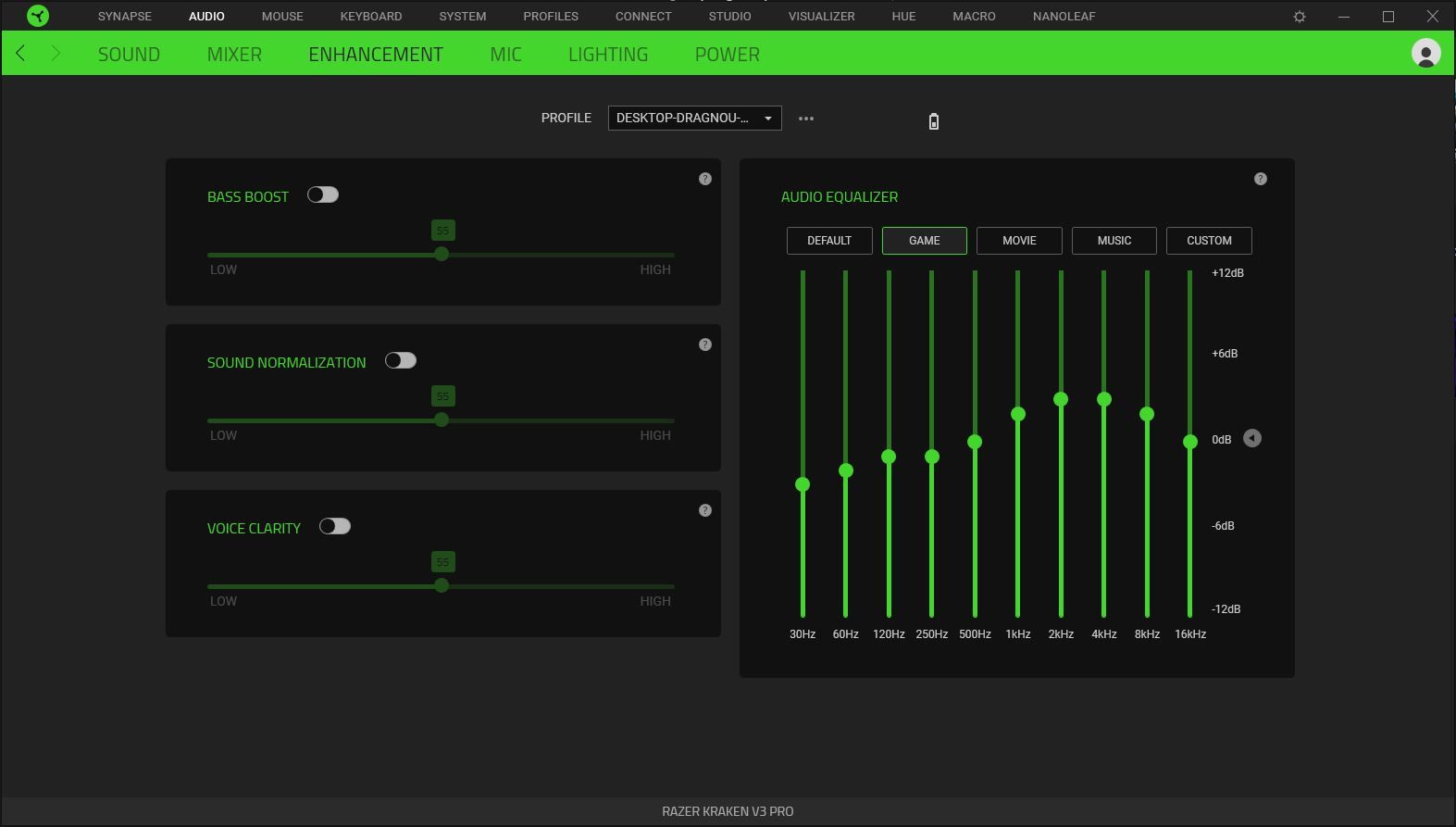 The real novel feature here is HyperSense, Razer’s built-in rumble pack for your ears. This is hyperbole, I admit, but it’s also true in a way. Yet, it’s not simple rumble. Instead, the haptic feedback this headset provides is much more nuanced and akin to the HD rumble of Nintendo’s Switch controllers. In short, the HyperSense technology baked into this headset is able to pick up on bass notes and translate those into intricate feedback you can feel. Explosions have power, gunshots have punch, cinematic scores have depth and presence… It's much more of a “sound system” experience, complete with subwoofer, than other headsets are able to provide. They’re buzzwords, but in this case they’re absolutely correct: immersive, tactile, and dynamic are all accurate descriptors of the HyperSense technology at play here.

And if you’re worried that the Kraken V3 Pro HyperSense being wireless might impact the tactile feedback, don’t be: it’s identical to the wired version. Currently, my guilty pleasure has been long gaming sessions of Dying Light 2. HyperSense technology has become essential to my immersion in the game. Subtle haptics alert me to danger around me, keeping me agile and on my toes. Since these have been finely tuned, I can accurately tell which side and position the haptics are coming from and respond quickly.

The Kraken V3 line also includes RGB Lighting via a ring on the outside of the earcups. In combination with Razer Synapse, you can adjust the lighting to fit your preference. Being able to sync with other devices makes adding it to an existing Razer setup quick and easy. If I could ask for anything, it would be more RGB here to better match the pro moniker and enhance the customization potential.

With all these features you might be asking, how long does the battery last? Razer boasts a battery life of up to 44 hours with haptics and lighting turned off and around 11 hours with both haptics and lighting turned on. I typically charged mine over USB-C when not in use, but you’ll still want to mind plugging these in if you make full use of its features. No power available? Razer has your back as they have also included a 3.5mm input as well. 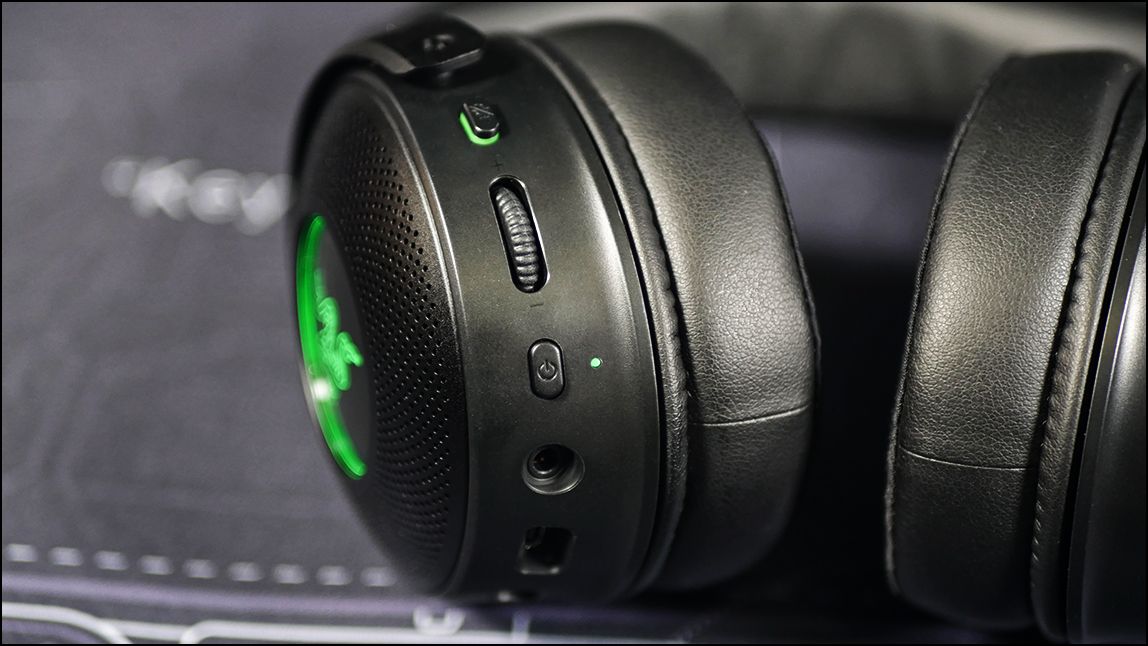 What else is different that makes this a true Pro variant? While both variants are identical down to the drivers, color scheme, and construction. Where the Pro starts to differ is in the materials used. On the V3 Pro HyperSense, the headset features a full plush leatherette headband whereas the V3 wired model has a two-tone finish being the upper side leatherette and the bottom being fabric. Another way the Pro differs is how it utilizes the volume wheel. On the wired model the volume wheel directly communicates with the USB controller and updates your primary selected audio device. The wireless model has an isolated volume control that does not impact your device's audio output volume.

With an MSRP of $199.99, the Razer Kraken V3 Pro HyperSense may be out of reach for gamers on a budget, but it remains excellent. If you are in the market for a replacement headset and need wireless then look no further. However, if you do not care about wireless and just want to experience the Haptic Feedback from the HyperSense technology, the standard V3 HyperSense model is another great choice that may be a bit more budget-friendly. The build quality alone has earned it a solid place on my desk.