Innovation is something that Razer is proud of and for a good reason. With each product it releases, countless hours go into fine-tuning the design in order to provide users with the best experience it has to offer while pushing those limits. The Razer Huntsman V2 optical keyboard has jumped on the “performance first” train that a few of Razer's other products have spearheaded. The latest iteration features upgraded optical switches in combination with foam dampening to reduce keystroke noise. Will this new direction prove to be the right path? Find out in this review.

The Huntsman line is Razer’s flagship keyboard. It offers a great set of gaming-first features and is robust enough to take the punishment of even the toughest loss. As with most Razer keyboards, I am typically very excited about trying any new variant. Recently. in a few of Razer’s releases, we have seen a different approach to design: focusing on the fundamentals. The Blackshark V2 and Barracuda X put the emphasis  on performance while keeping a low-key overall design. In some ways, this simplified approach is a blessing in disguise as fewer superfluous features often means a lower cost of entry.

This week, we’re introduced to Razer’s latest refresh to the Huntsman line-up: The Huntsman V2 linear/clicky optical keyboard. This model features razor’s optical switches in both a linear and clicky variant. Each model comes with a new foam dampening pad built into the chassis to help reduce the keystroke presses that are caused by bottoming out. This combination provides a satisfying actuation that is effortless and fun to use. This is especially great if you tend to play at night and want to avoid as much noise as possible without giving up clicky keys. This new model is similar to the V2 Analog variant, except for a few features that I did not believe I would miss until they were gone.

Razer is turning up the speed in more ways than one. This new model features its new 8k HyperPolling which increases the response rate from 1000Hz (1ms) to 8000Hz (0.125ms). In combination with the optical switches, the Razer has been able to reduce the latency to a mere 0.2ms. If you compare this to an average mechanical keyboard at 2.0 - 2.4ms, it outperforms them by a factor of ten.

Seems fast, right? Well, it is, but the more important question is whether it makes a difference in gameplay. On a theoretical level, yes. It responds faster than a traditional mechanical keyboard in more ways than one (the optical switches themselves are faster due to the lack of debounce delay), but is an 8kHz response time something you can feel or notice in a gaming keyboard? In my case, no, and I suspect that for average gamers, this may be a feature that will go underappreciated.

Reliability is another factor in performance that is just about as important. The optical switch technology is impervious to double-actuation based on mechanical switch jitter and has no need for any debounce masking. The optical switch technology reduces wear and tear since they do not rely on making physical contact with connection points to complete the keystroke. This gives the Huntsman V2 a 100 million keystroke lifespan, double that of the average mechanical keyswitch. 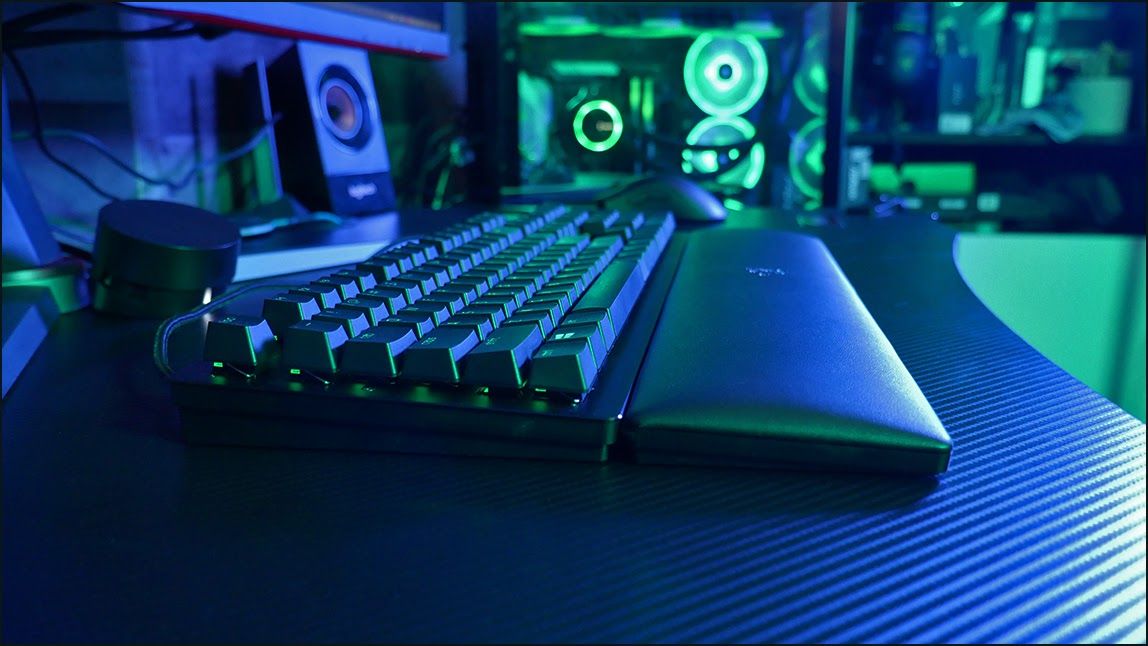 No matter what I threw at it — CS:GO, Doom Eternal, Minecraft — the Huntsman V2 Clicky Optical kept up with my demands. While in practice I was unable to discern any difference with the 8k polling rate, the already lightning-fast response time of the optical switches proved to be a force to reckon with. I found the actuation on the keys smoother and easier to press. Likewise, they were more comfortable to use during longer sessions and caused less fatigue.

While speed is critical to keyboard operations, the feel is just as important. The Huntsman V2 has gone with PBT keycaps, which is far more resistant to developing a shine after extended periods of use. Users need to be able to trust that their keypress is precise and perfectly placed. When keycaps begin to wear this can provide a more slick surface that will increase the chance for mistakes and make the keyboard look old before its time.

The Huntsman V2 wouldn’t be the same without the aluminum top plate so central to its design. The aluminum gives the chassis a sturdy and strong feel. Not only does this provide strength and rigidity, it really gives the Huntsman V2 a premium look that you cannot ignore. The magnetic wrist rest retains the edge-to-edge design found on the Analog variant. This provides a comfortable surface to support the user during long gaming sessions.

Often overlooked and unaddressed, the acoustics of any keyboard play a major part. Razer has set its sights on improving the sound profile and on setting a new benchmark for prebuilt mechs. By including sound dampening foam into the chassis, Razer is able to reduce the overall volume of each keystroke and reduce the hollow, reverberant sound of the case. The difference was clear as day. The noise was reduced such that the biggest sound is the click which, for clicky fans, is a big reason to purchase this version of the Huntsman. I did notice that the dampened effect did make the sound of the wires rattling under the keys more apparent, which was distracting at times.

While the goal was to achieve more with less, the reduction of some of my favorite features did feel lackluster. I love my RGB lighting and enjoyed the underglow lighting of the previous models. It was something that I hardly saw with other keyboards and really felt like a full and unique package. That’s been removed on this model, so it’s under key lighting only, as well as the dedicated media buttons.

Another feature that’s been removed is the built-in USB hub. It’s a feature I used more than I even realized and miss now that it’s gone. It may be a niche feature these days, but when you use it every day, it gets bumped up the priority ladder. Cutting it probably won’t be a deal breaker, but it leaves me wishing for a “V2 Elite” more than ever.

I would also like to point out that the bottom row has now been standardized to increase compatibility with Razer’s replacement PBT keycaps (as well as those of other brands that support a standard bottom row). This is a nice feature for customization fans. 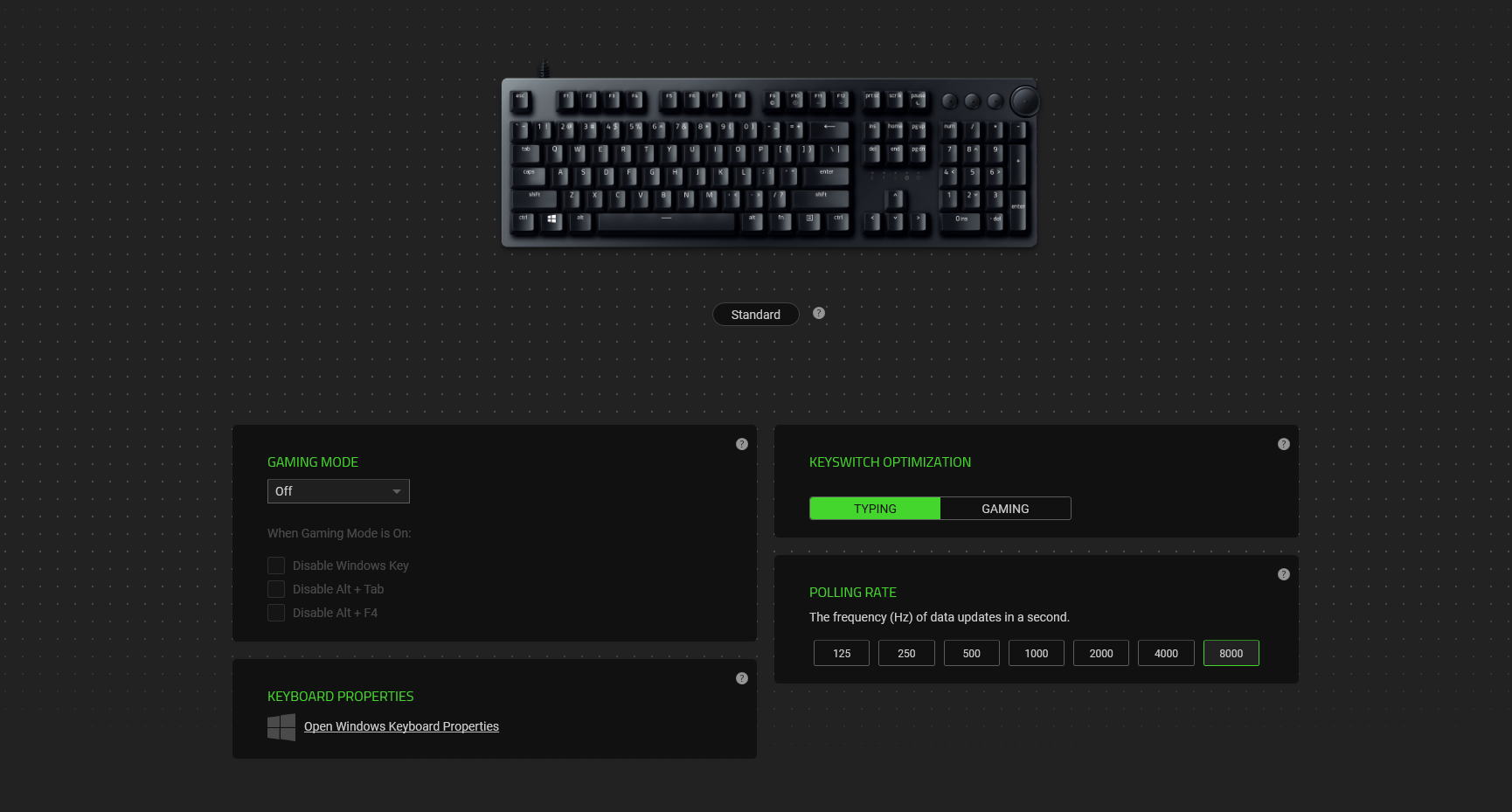 Lastly, the Huntsman V2 utilizes Razer’s Synapse 3 software to achieve its full functionality.  It has Hybrid on-board memory and cloud storage. This ensures that users have access to their personalized settings no matter where they are. With synapse, you can change the colors, effects and even reprogram each individual key to match whatever game style or config is required.

The Huntsman V2 is a great keyboard when you consider its optical switch technology and the wonderful sturdy construction. However, with an MSRP of $189.99/$199.99 it feels like a worse value than its feature enriched predecessor at the same (or +$10 price). If you already have a Huntsman keyboard, you will need to weigh out the addition of the damping, improved wrist rest, 8k polling rate is worth it. While I do love using this keyboard, it leaves me wanting.