Razer has always been on the bleeding edge of peripheral development. Each reincarnation and variant pushes the proverbial envelope further among its designs. Recently, Razer has embraced the small form factor with keyboards like the Blackwidow V3 Mini Hyperspeed and is back again, this time to shrink down the Huntsman Analog. The Huntsman Mini Analog brings everything you love about the original Huntsman Analog into a smaller, more affordable form factor: joystick and trigger-like control with optical analog switches, a compact 60% form factor, doubleshot PBT keycaps, onboard memory, bright and customizable RGB, an aluminum chassis, and more. At $149.99, it’s still premium priced but is the cheapest way to experience Razer’s analog tech. Join me as we find out if it’s worth picking up for your gaming rig.

What made the Huntsman line a success was not only its performance but the fact that Razer is always keeping its ears to the ground and responding to what its community is looking for. The recent success of the Razer Huntsman V2 Analog has led to the obvious choice of introducing the very same technology analog into their SFF lineups.

The Huntsman Mini Analog features Razer’s Optical Analog switches, which can sense how far each key is being pressed, similar to a joystick or gamepad trigger. Unlike a normal keyboard, where the switches are simply “off’ or “on,” these switches add a whole new dimension of control to gameplay, previously limited to controllers (and the limited competitors producing analog keyboards today). They also allow players to configure the actuation point of each switch to determine when the switch is activated. In addition, you can adjust a second actuation/release point to tie two actions to the same key.

The example Razer likes to give is of being able to equip a grenade and throw it with a half press, then a full press. This sounds like an excellent use case, but obviously depends on whether the games you’re playing will benefit from this kind of advanced mapping. Likewise, you’ll need to be careful with your presses lest you blow up your teammates. This is only one example, though, and being able to tie multiple actions to a single key is genuinely exciting.

Razer has improved analog functionality by providing quick auto binds located inside of Synapse. In one click, players can bind the WASD keys to act like joysticks. You can also change the sensitivity of each key with a built-in curve editor. This editor includes 5 presets with the last being a Custom option that allows users to finely tune the sensitivity to meet individual needs and heavy-handedness. 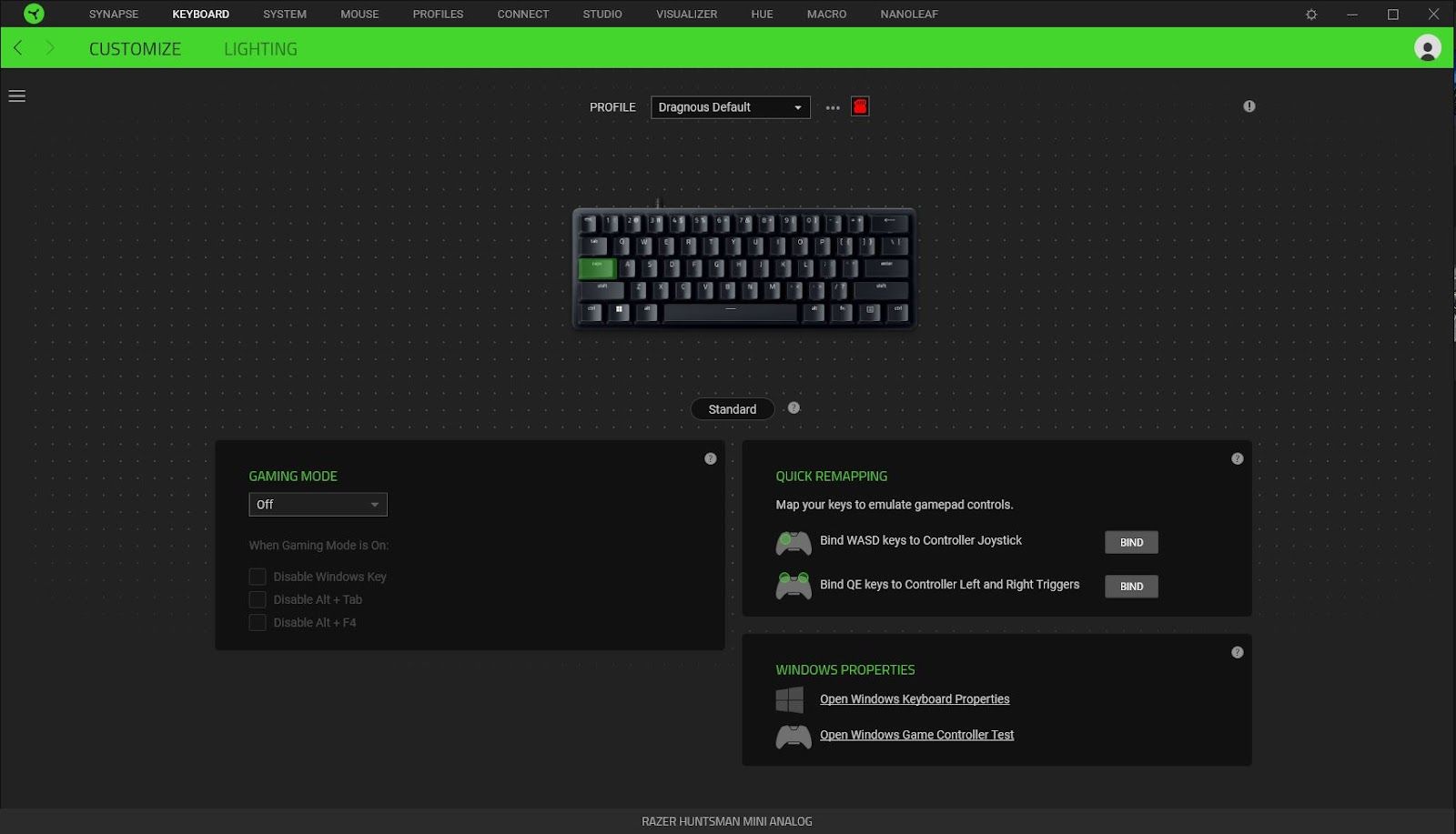 A feature so rich is adjustability begs to be put to the test. First to bat for me was CS:GO. Movement within the game is absolutely improved with analog control. At first, I found it to be sluggish, but was able to swap to the Fast preset to get the responsiveness I was looking for. This allowed me to be quick and responsive while also having nuanced control. It took a few matches to get used to it, so there is a learning curve, but I didn’t find it to be too difficult. Your  mileage may vary depending on your settings and preferences.

I found this to be true in most of the games I played. Racing games benefit very much from analog control, but really any game that’s able to swap between keyboard and controller on the fly has the potential to be a good fit here. That’s not all of them, so if you’re on the fence, be sure to check the games you plan on playing first. Virtually all of them need some degree of customization and learning, however. It takes time, and doesn’t work 100-percent of the time, but when it does, it’s great.

While analog control is neat and something that I consider fairly game-changing, it doesn’t completely replace a controller. One thing the Huntsman Mini Analog doesn’t overcome is the shallow travel distance of the average mechanical key. Compared to a controller, there’s just far less movement, so you have to be very light to the touch with these keys. Press too hard and you might find yourself sprinting instead of stalking. It’s cool tech, to be sure, and probably the future of gaming keyboards, but a controller will still have its place at my desk.

Razer is legendary when it comes to chassis construction and the Huntsman Mini Analog is no exception. The aluminum chassis provides a solid build that has no perceivable deck flex while typing. This is extremely important as it adds to the overall typing experience. Razers Optical Analog Switches provide a smooth linear keystroke that is padded by sound dampening foam to reduce typing noise and improve acoustics.

Let’s face it, a great-looking keyboard-only looks as good as its least visually appealing part. Each letter is not only the thinnest they have ever been, they are added during the 2-stage process that molds them permanently, providing a surface that will stand the test of time and never chip or fade. 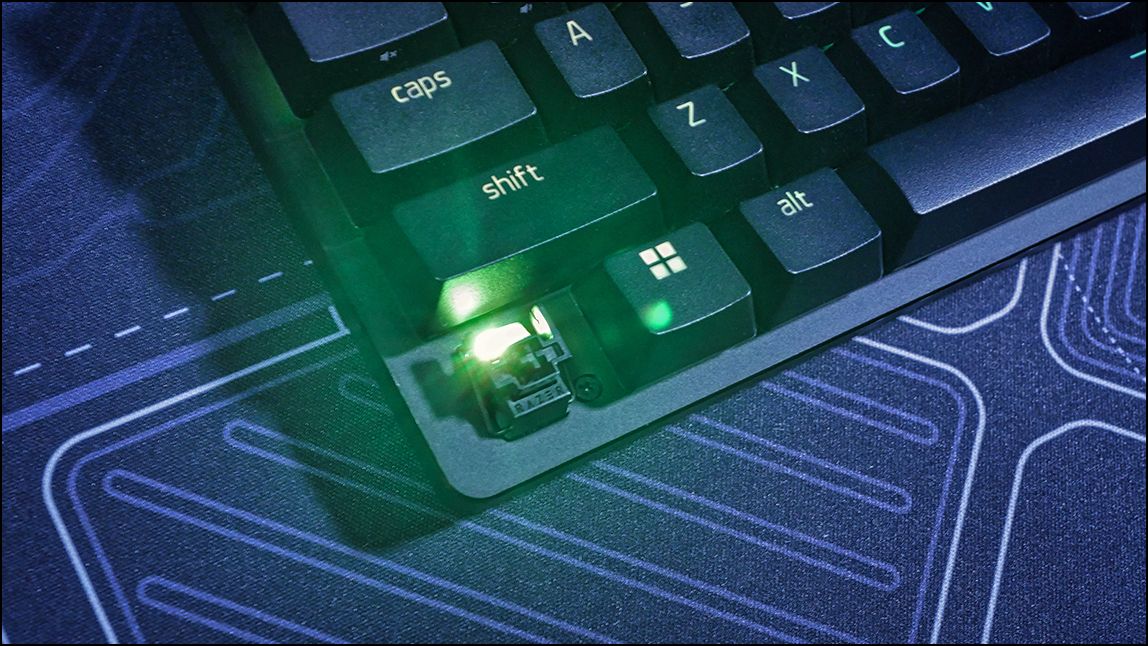 If you game with low lighting you may find reading the legend printed on the side of the keycaps difficult to read. This is especially important here with such a compact form factor. The 60-percent layout makes secondary functions accessible with key combinations, but if you can’t see the side legends, you’re stuck craning over your keyboard or turning on extra lights. This problem alleviates with time as you memorize the combos you need, but it would be nice to see side-lit legends on a revision.

The Huntsman Mini Analog features 4 onboard memory slots that can be swapped using the function keys. While this may seem like a trivial option it provides the ability to operate without being used with synapse. I utilized this feature by having my default profile being the normal keyset while having another that has the key bindings for the joysticks. This was important so that I could type during gameplay, as analog keys are mapped to gamepad functions.

As a Razer keyboard, it should come as no surprise that the Huntsman Mini Analog supports plentiful RGB options. There are a good number onboard that can be swapped between without software, but the potential of the presets is dwarfed by Synapse Studio, which gives you Photoshop-like control. Using these, I’m able to keep a consistent lighting theme whether I’m at work or playing some games on the go with my XPS laptop. 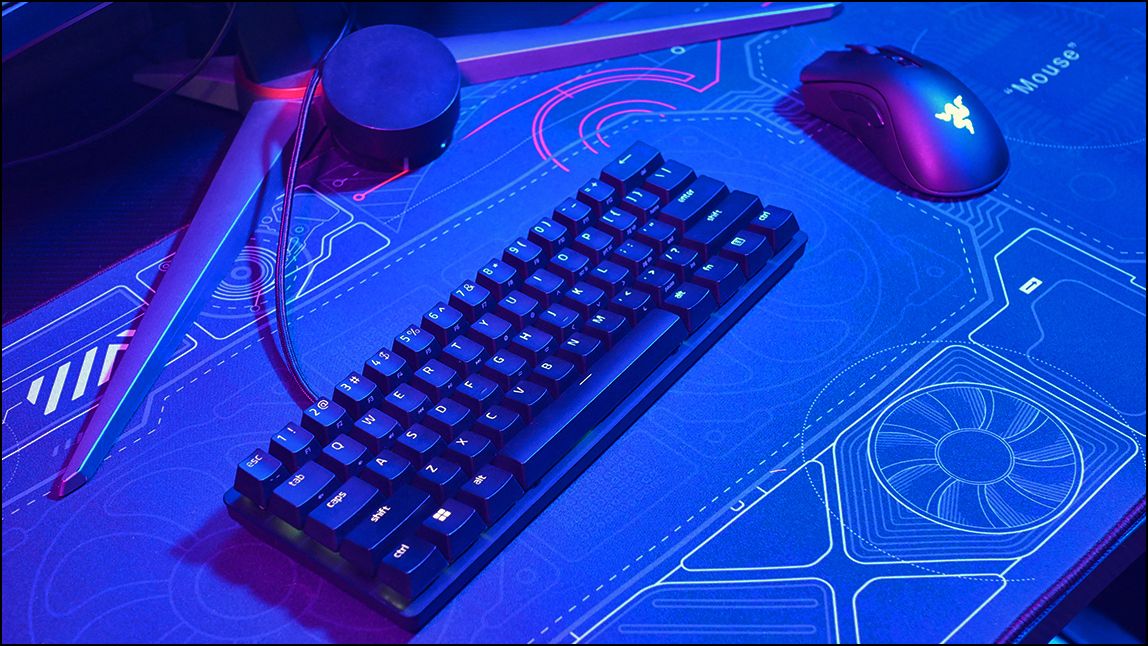 Witnessing the onslaught of mini keyboards being released, I had an urge to jump into the fray and see just for myself what the buzz was all about. As a long-time Razer customer, and reviewer of the full-size V2 Analog, I jumped at the chance to review the Mini and combine the two worlds.

The sheer reduction in size makes my desk feel massive. I always struggle to find the right place to keep my keyboard where I can type and still have enough room for large mouse movements. That said, I work in the never-ending world of IT and my daily driver is a full-size keyboard; I was unprepared for what type of interruption switching to an 60-percent would yield.

Where are the buttons I need? This was my recurring thought for at least the first two hours. Quickly I found that my use of the number pad was instrumental and resulted in changing my habits. I forced myself to break habits and jumped into Synapse to remap some keys. The first minor change was adjusting my FN + WASD arrow keys, as well as setting my CAPS key as a Hypershift button to access my secondary layer. Utilizing this change I was able to create more intuitive key mappings that worked for my personal style better than those come mapped by default.

Once I made those changes, I was off to the races. I was able to fluidly operate with the only exception still being the num keys, which is a sacrifice of all compact keyboards. For me, this makes more sense for personal use, as I do most of my gaming without the Numpad. 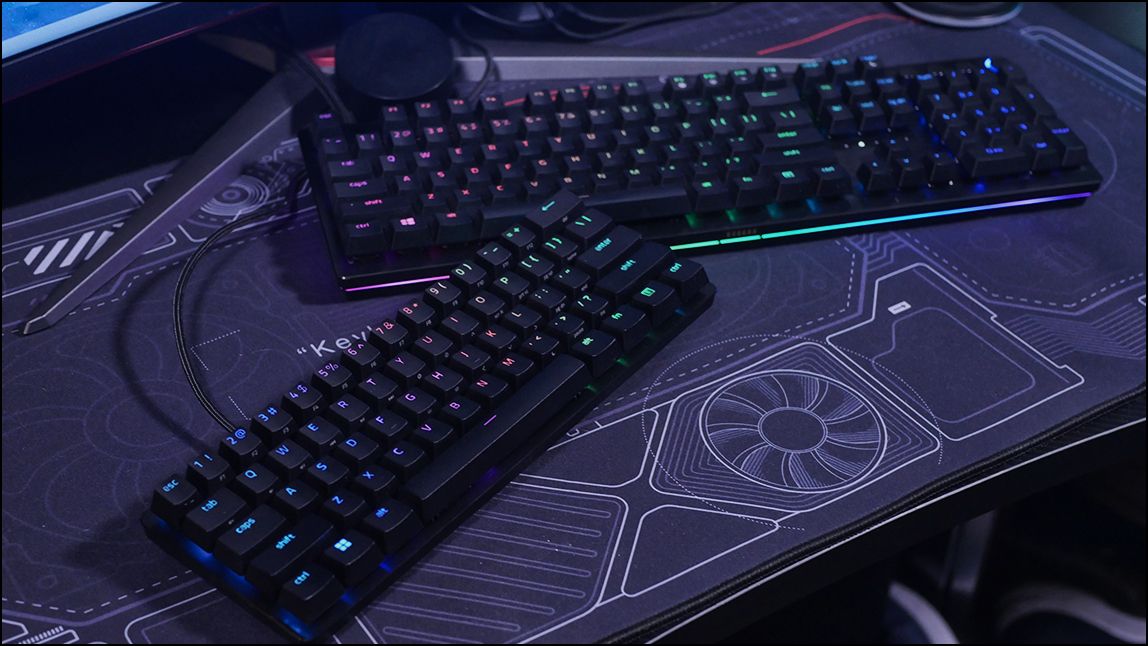 The Razer Huntsman Mini Analog is an impressive keyboard despite being a fraction of the size of its bigger, longer brother, the Razer Huntsman V2 Analog. It packs a feature-rich selection of capabilities not found anywhere else. The fine-grained analog controls not only change the way you play games but the way you interact with them. The build is premium and is every bit what I hoped for from a Mini Huntsman. Expect a learning curve and to do some customizations to make the most of it, however. If you’ve been looking for a way to test out Razer’s analog switches at a discount, this is an excellent way to do it.