The DeathStalker is one of the most classic entries in Razer’s line-up, but it’s been quiet for a number of years now. In fact, the DeathStalker Chroma was one of the first Razer products I ever reviewed, way back in 2015. Razer is finally ready to raise the venerable line from its hibernation with the brand new V2 Pro line-up. Available in wireless, wired, and TKL versions, the DeathStalker Pro V2 reinvents the series, swapping the chiclet keys for high-performance optical switches that are both ridiculously fast and exceptionally quiet.

Starting at $199 for the base model and extending to $249 for the flagship model we’re reviewing today, the DeathStalker V2 Pro is designed to go head-to-head with the Logitech G915. Let’s see if it succeeds. 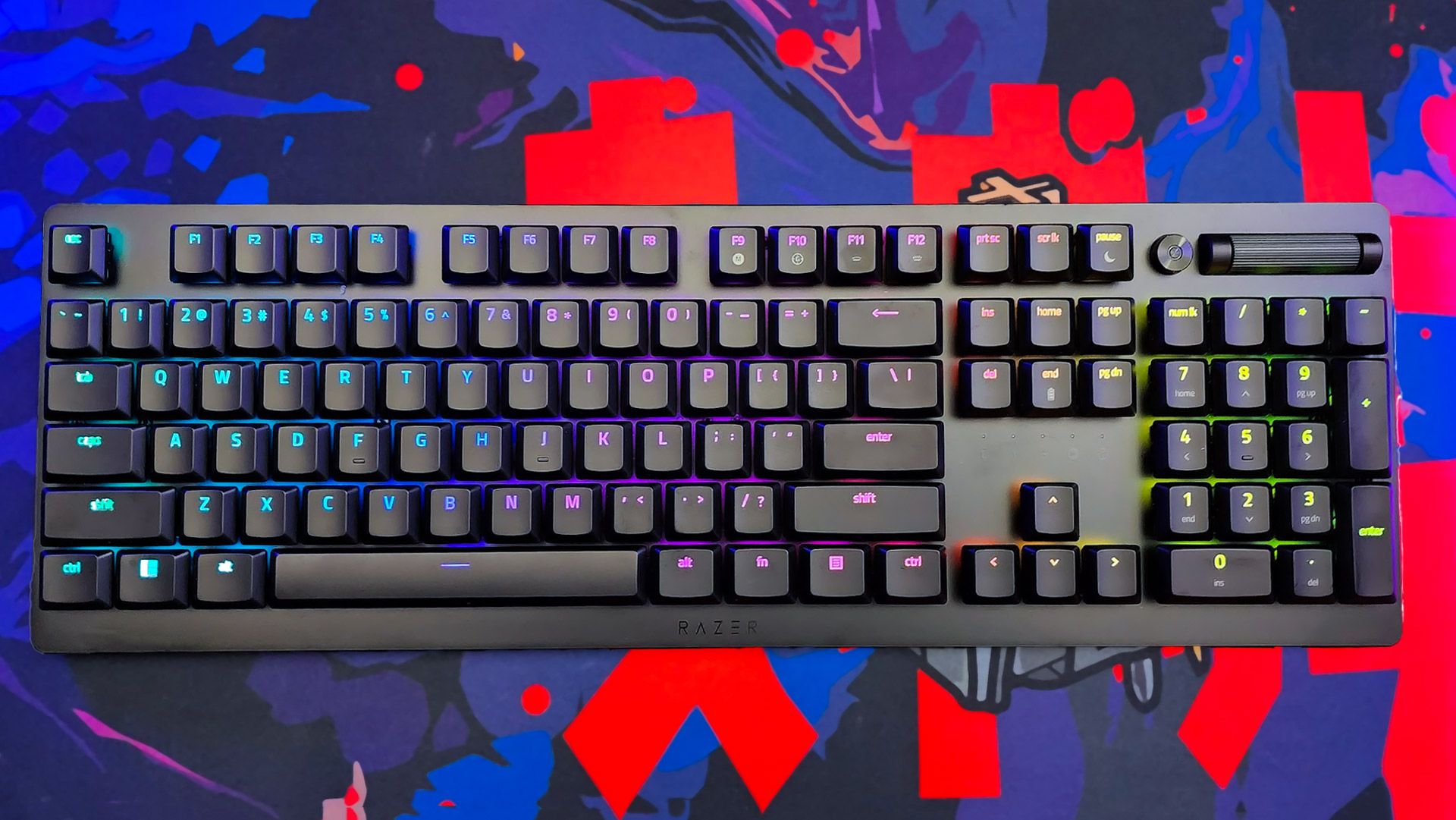 Razer DeathStalker V2 Pro - What Is It?

The Razer DeathStalker V2 Pro combines the ultra-slim design of the original DeathStalker with the hyper-responsiveness of the Razer Huntsman line-up. It’s as slim as ever — 21mm in the front, the same as an American nickel — and robust thanks to its heavy aluminum top case. But it’s the internals that have received the biggest overhaul. It’s now equipped with low-profile optical switches, per-key RGB, 2.4GHz HyperSpeed Wireless, multi-profile Bluetoooth 5.0 and more. The DeathStalker is officially up with the times. 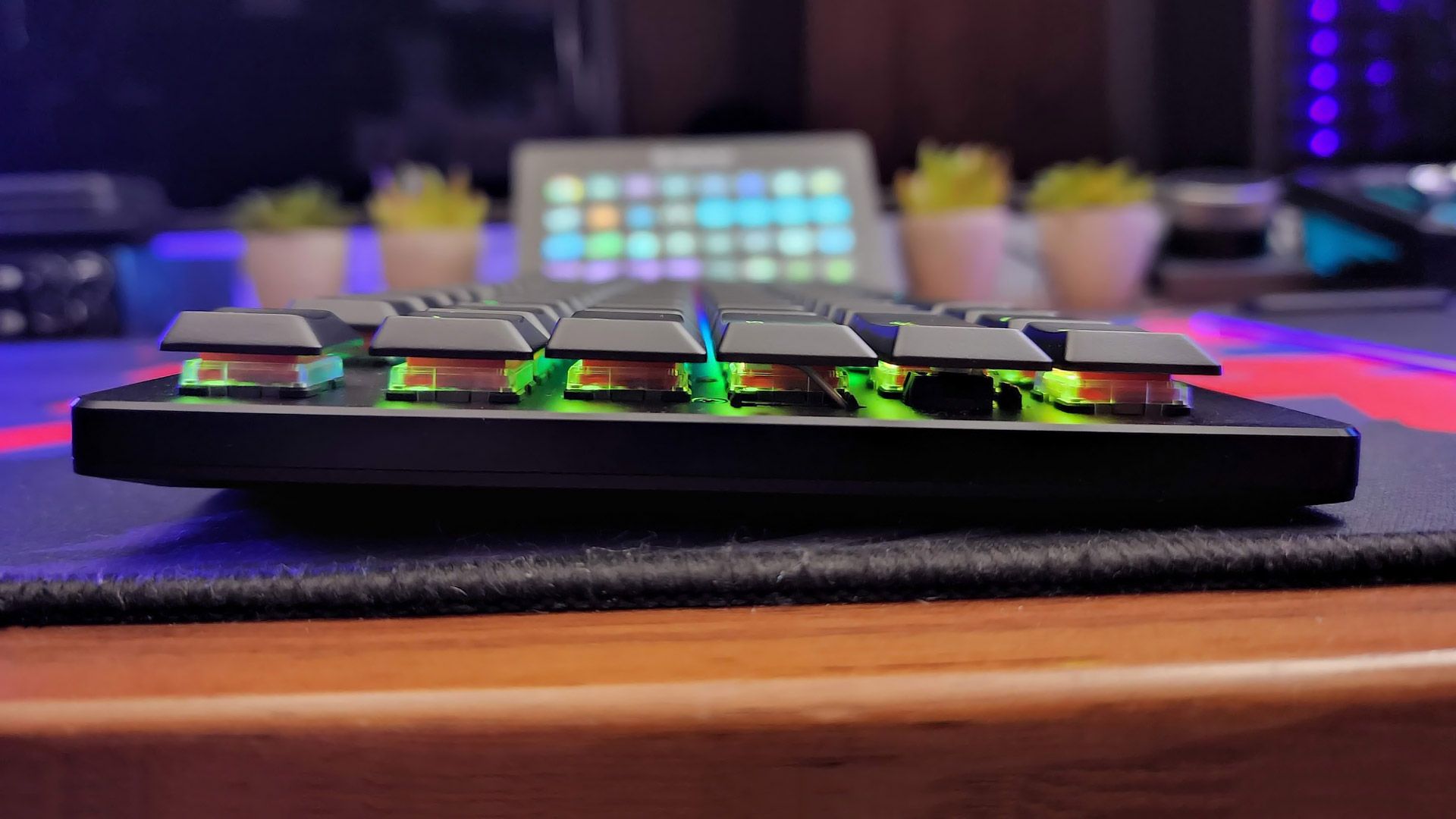 The low-profile design is the hallmark of the V2 Pro, and no matter which version you get, you can count on the same height. At 21mm in the front, there’s no need for a palm rest. The keys are also completely flat, so there’s no contour across the different rows like a full-height gaming keyboard. If you’re used to gaming on a laptop or Apple keyboard, this should feel immediately familiar. If you’re coming from a full-height keyboard, you should plan on taking some time to get used to the new way your fingers will be attacking the keys. 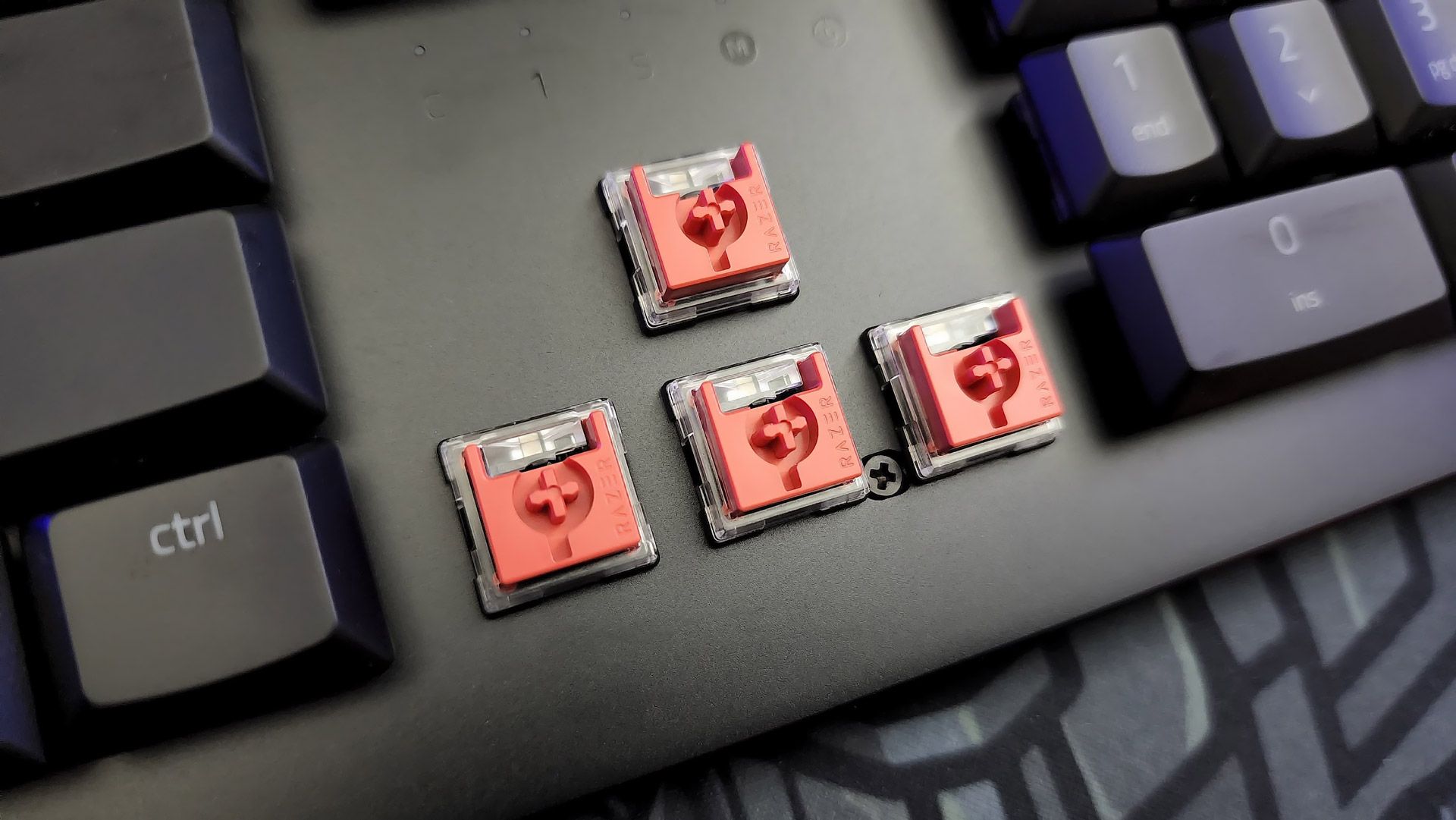 The keyboard uses Razer’s first low-profile optical switches. Out of the gate, you’ll only have linear red switches to choose from but clicky versions are set to launch late this year. These switches are have a similar weight to Cherry MX Reds at 45 grams of actuation force, but they’re much faster to actually use. Compared to a traditional mechanical switch with an actuation point of 2mm and a full travel distance of 4mm, Razer’s low profile optical switch actuates at 1.2mm and has 2.8mm of total travel. On top of that, the optical design removes the need for physical, mechanical contact removes even tiny electrical delays in the keypress. These are exceptionally responsive.

While those changes seem small on paper, the actuation and travel differences are immediately noticeable. In the beginning, it’s much easier to make typos with, unfortunately, but for gaming, they seem to actuate instantaneously. The switches also include silicone dampeners to quiet typing sounds, so you can use this in an office or in the same room with your spouse or roommate.

Compared to Logitech’s GL linear switches, the Razer Low Profile Opticals are both faster — on paper and in practice — and quieter. Not only do the keys physically actuate faster, but they’re also optical and have a technical advantage in responsiveness. Logitech offers more options, however, and even after Razer’s clicky switch launches in Q4, there’s still no option for a tactile switch, which is a shame with this form factor. 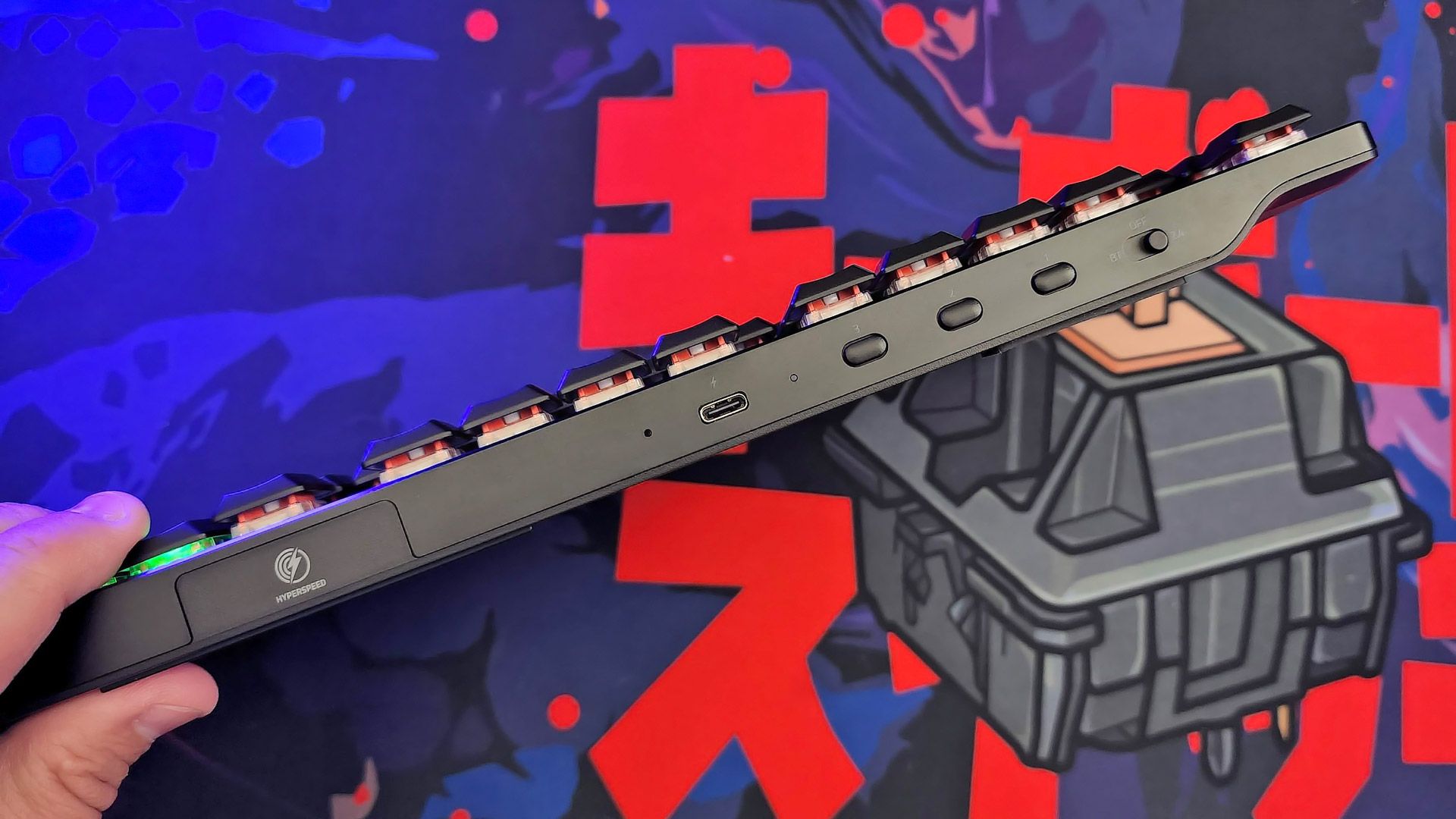 The V2 Pro also gives you multiple choices for how you’d prefer to connect your keyboard. It supports Razer’s HyperSpeed Wireless technology, so you can game without the tether at full responsiveness. You also have Bluetooth 5.0 with three hot-swappable devices using a switch and set of handy buttons on the back of the keyboard. There’s also USB connectivity, of course, which also recharges the keyboard’s battery whenever it’s plugged in. You won’t want to use Bluetooth for anything other than productivity, but it’s nice to see such easy multi-device connectivity that connects quickly and reliably every time.

If you’re connecting wirelessly, you’ll want to keep an eye on your battery life. Razer estimates ten days of use at four hours a day — 40 hours — with RGB at 50% brightness on the spectrum cycle lighting mode (not the rainbow wave or other advanced effect). That’s decent but isn’t exceptionally long, especially given that you very well may want to turn the brightness up or take advantage of the more advanced effects allowed by Synapse. By contrast, the Logitech G915 is rated for 30 hours at 100% brightness, which is more than the DeathStalker V2 Pro can provide. 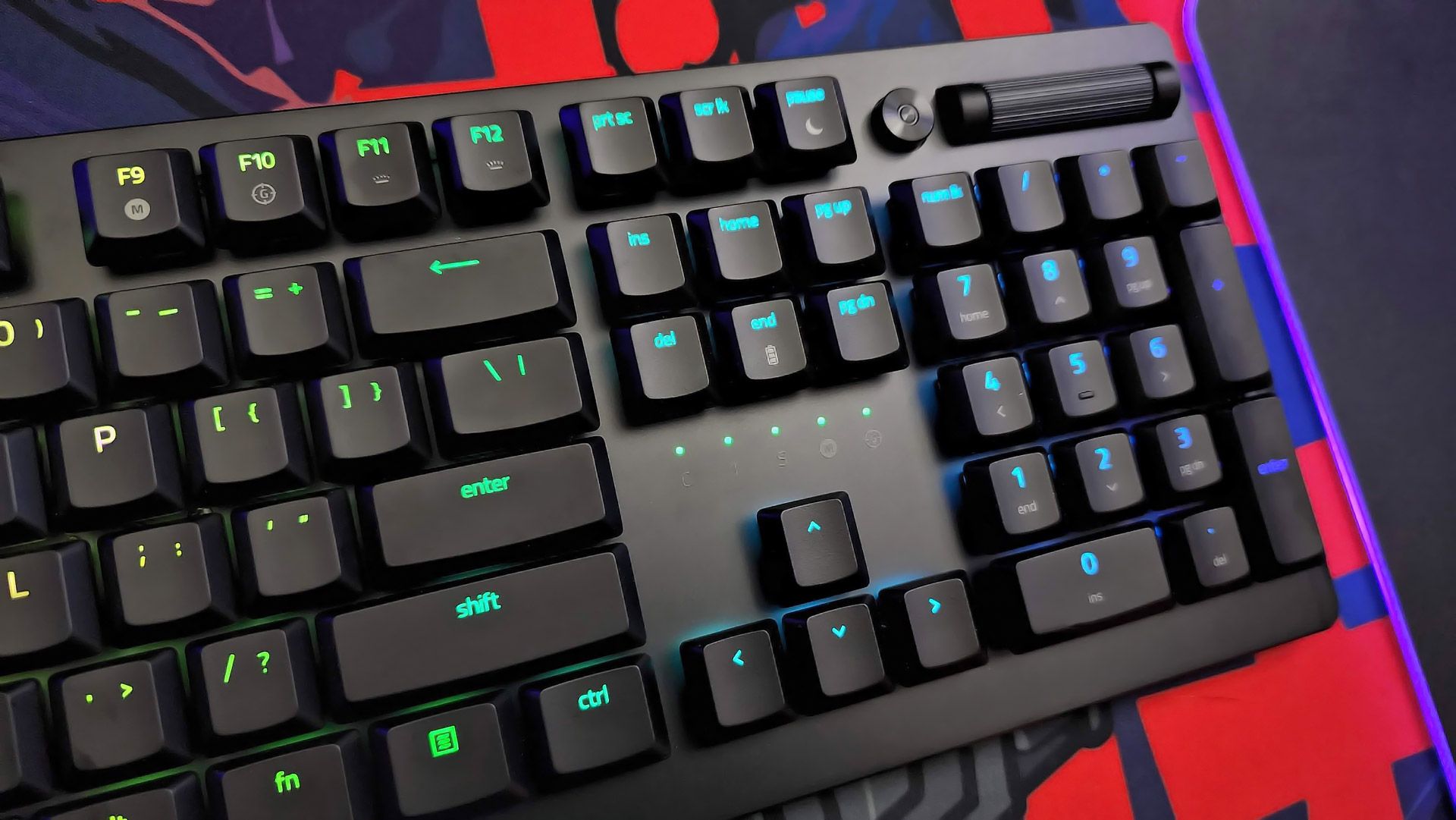 There’s a good reason for that difference. While the G915 is mechanical, the optical switches found on the DeathStalker require a separate light for every key inside the keyboard. Since there are no mechanical contacts, key presses are triggered by the switch hitting this beam of light. The DeathStalker is the more responsive keyboard, but it takes more power to get there. 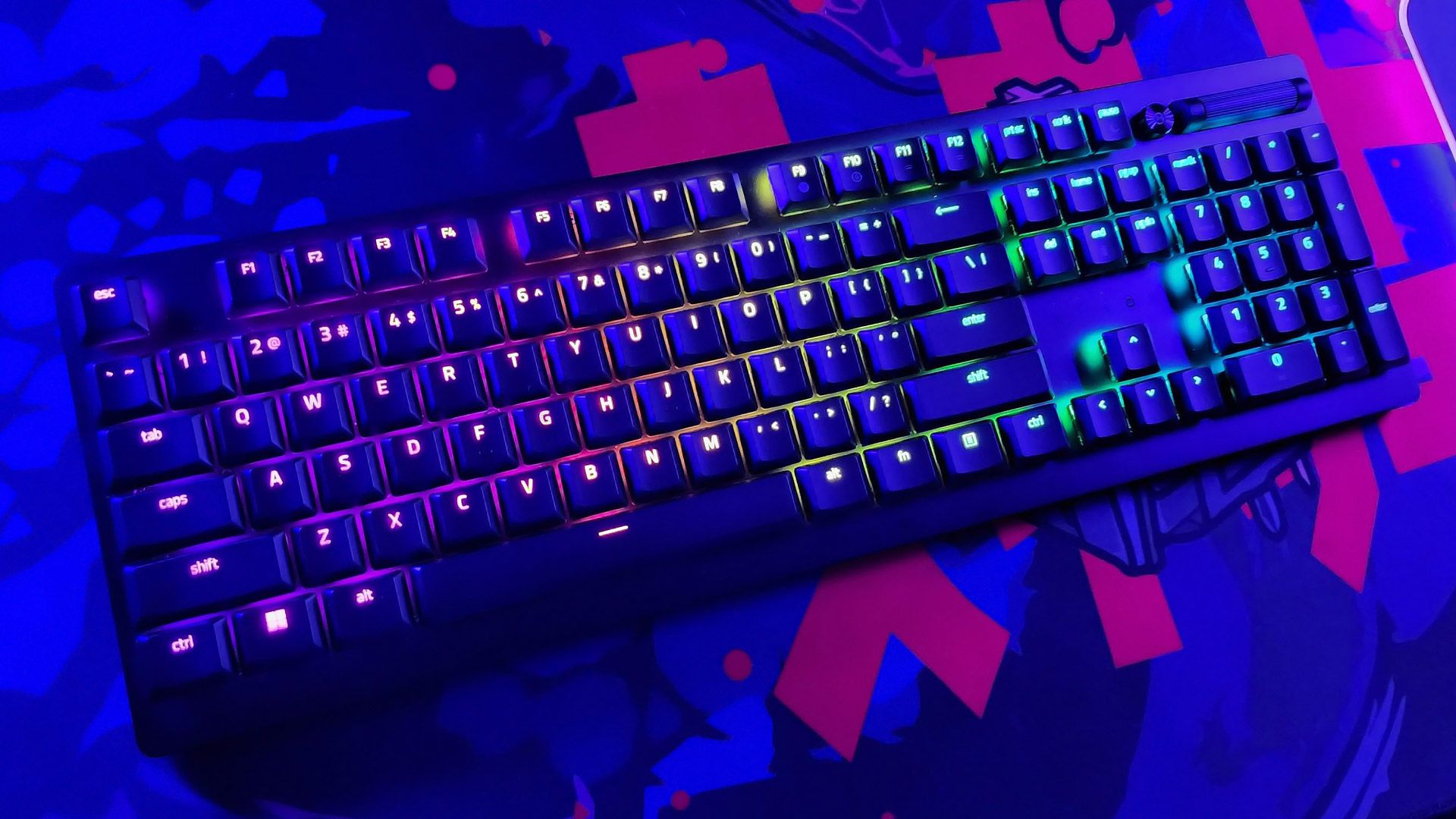 Razer has also built in a handy battery meter you can access by tapping Fn + End. Doing so illuminates the five indicator lights above the arrows to show you how much battery you have remaining. It’s a clever solution and is genuinely useful.

Since this is a Razer keyboard, there’s plenty of RGB goodness to enjoy. There’s per-key RGB lighting that’s fully customizable within Synapse, but six preset effects also come built in. The switches feature translucent top housings for a showy side-profile, but the lighting is surprisingly well isolated. It shines brightly through the keycaps, and thanks to clever parallel placement of secondary legends, you’ll be able to see symbols as well as numbers along the number row. 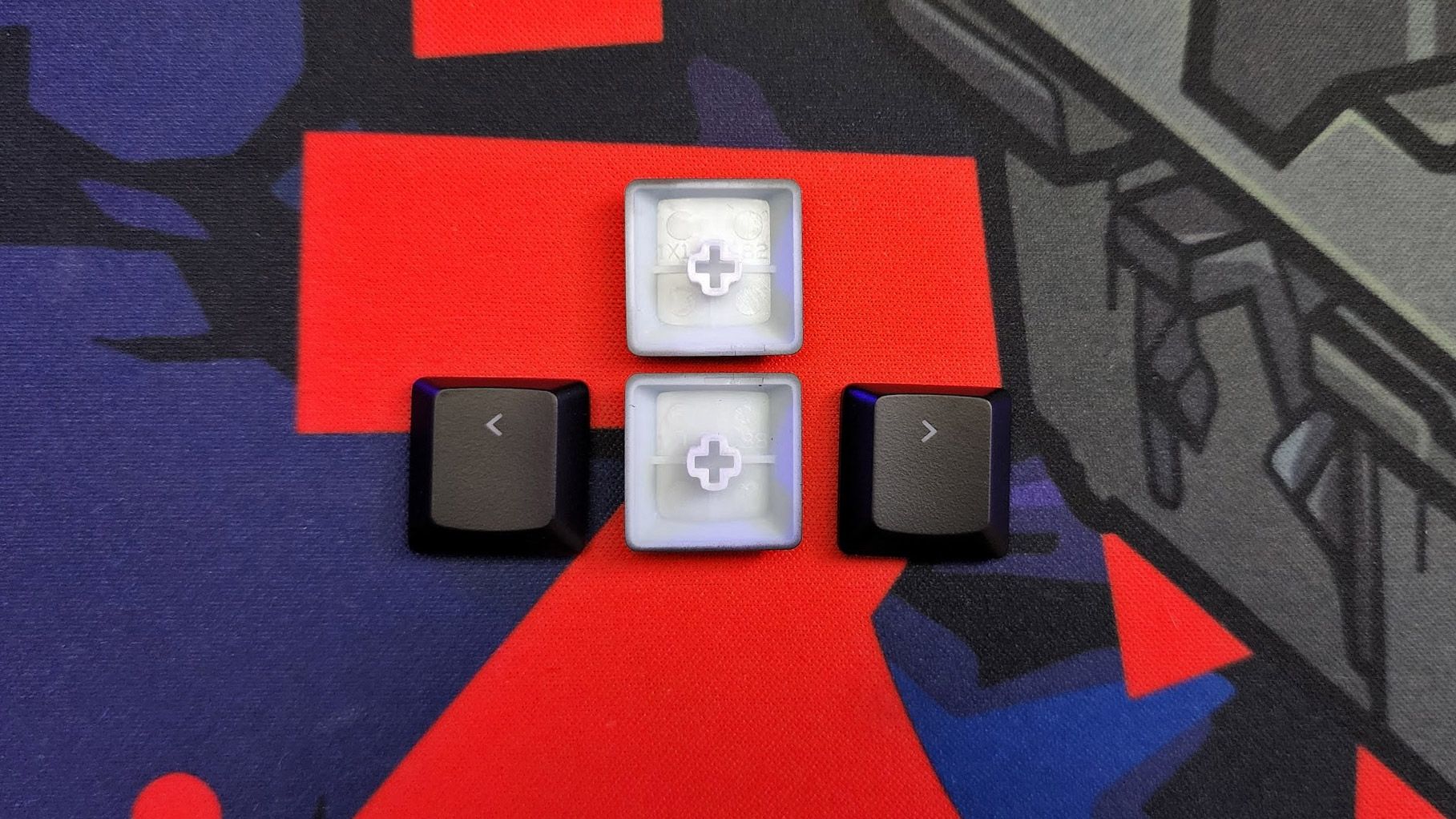 The keycaps are another area Razer has improved the design. They’re traditional, thin ABS that has been painted and laser-etched, but the company has applied a special, ultra-durable coating to ward of shine over time. That’s the kind of improvement that can really only be assessed over long-term tests, but in the two weeks I had the board in for testing, they didn’t develop the oily look Razer’s — and well most older  ABS keycaps would usually take on, so improvement has clearly been made.

Finally, in the right of the keyboard we have a multifunction volume roller and media button. The volume knob is metal and has a tactile roll, feeling very nice to use, and is clickable to mute your PC audio. The media button takes a cue from true wireless earbuds and performs different functions with single and multiple taps. Tapping once will play or pause your track. Tapping twice skips tracks and three times moves backward in your playlist. The volume roller can also be reprogrammed in Synapse to perform additional actions like scrubbing timelines or scrolling webpages. 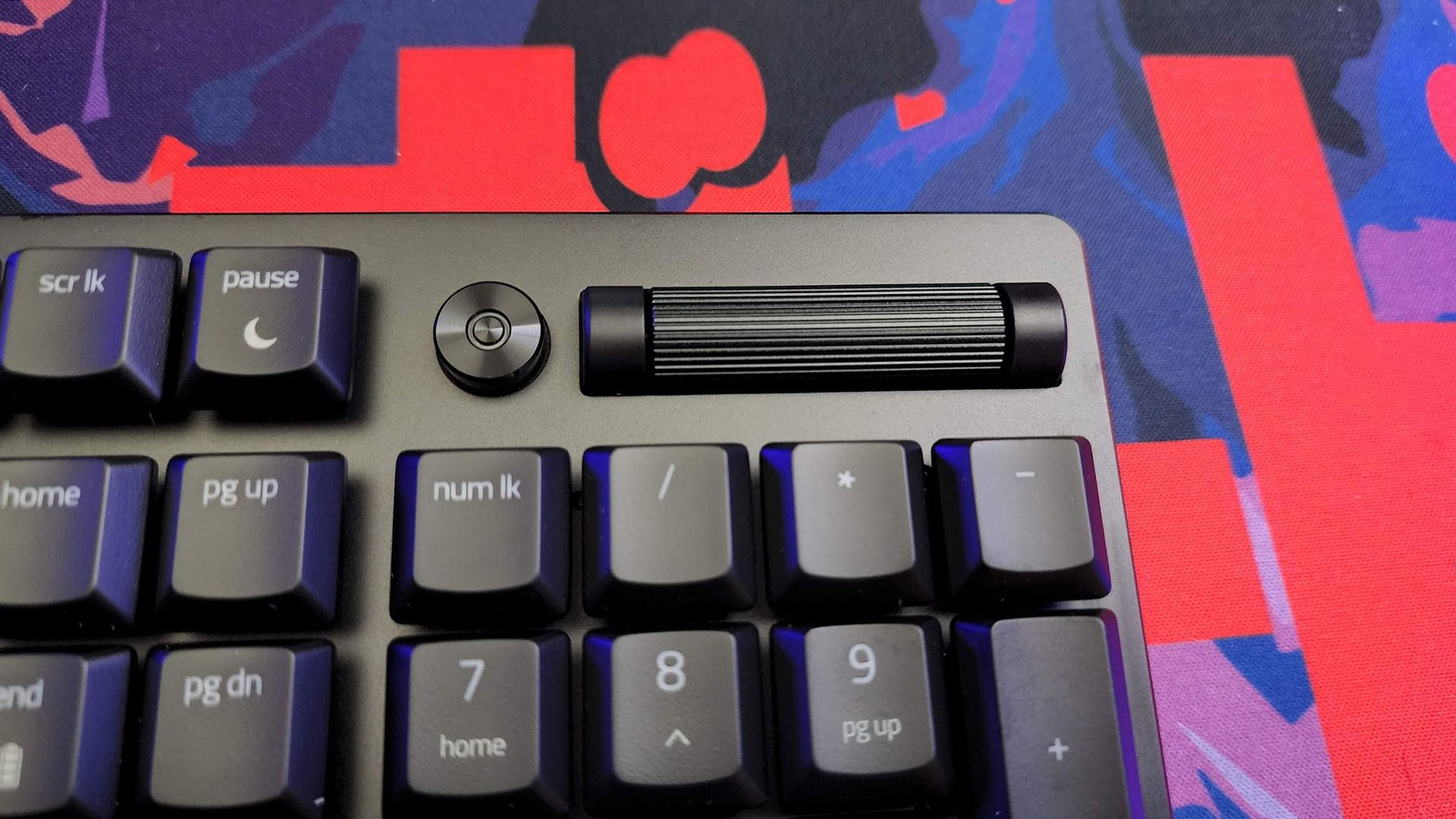 Of course, you can do much more within Synapse. The DeathStalker V2 Pro is completely reprogrammable and can even carry a second layer of keycaps thanks to Razer HyperSense. Using this, I was able to turn my number pad into a shortcut cluster, launching apps and webpages with single button presses. In games, it became a macro cluster. At this point, all of this is old hat for Synapse. The software is refined and works well.

Razer has developed a great keyboard with the DeathStalker V2 and it’s a solid answer to the Logitech G915, trumping it in features. As a gamer and someone who uses their computer every day for work, I care deeply about reliability, responsiveness, and how a keyboard feels to use.

Razer nails it in most of these areas. I used the keyboard primarily wirelessly over 2.4GHz and there was never a time when the keyboard felt like a “wireless keyboard.” There was no lag or delay whatsoever, and I even went back and forth plugging it in and unplugging it without seeing any drop in responsiveness whatsoever. If you’re someone who worries about a wireless keyboard lagging behind its wired counterparts, don’t be. The DeathStalker V2 Pro is ridiculously fast no matter how you’re connecting.

That speed was a problem for day to day work, however. I typically use a full-size keyboard when working at my PC, but I routinely use a similarly low-profile, completely flat keyboard with my laptop when I’m traveling (the excellent Nuphy Air75). The fast actuation of the keys makes typos easier to make, even once you’re used to typing on it. Even in this very review, I’ve had to do more backtracking to correct mistakes than on either the Nuphy or G915. So, great for gaming, but if you’re typing out long essays, be ready to use that Backspace button.

The dampened quality of the switches is also a double-edged sword. Razer discussed the iterations they went through before this review, attempting to find the sweet spot between quiet typing and a crisp, not mushy, typing experience. They don’t feel mushy, but they do feel cushioned and dampened in a way that makes them much closer to a silent linear than a normal linear keyswitch. That’s not bad if you’re using the keyboard where you want to avoid bothering others, but it left me wishing for a normal linear switch or tactile option to help with those typos. 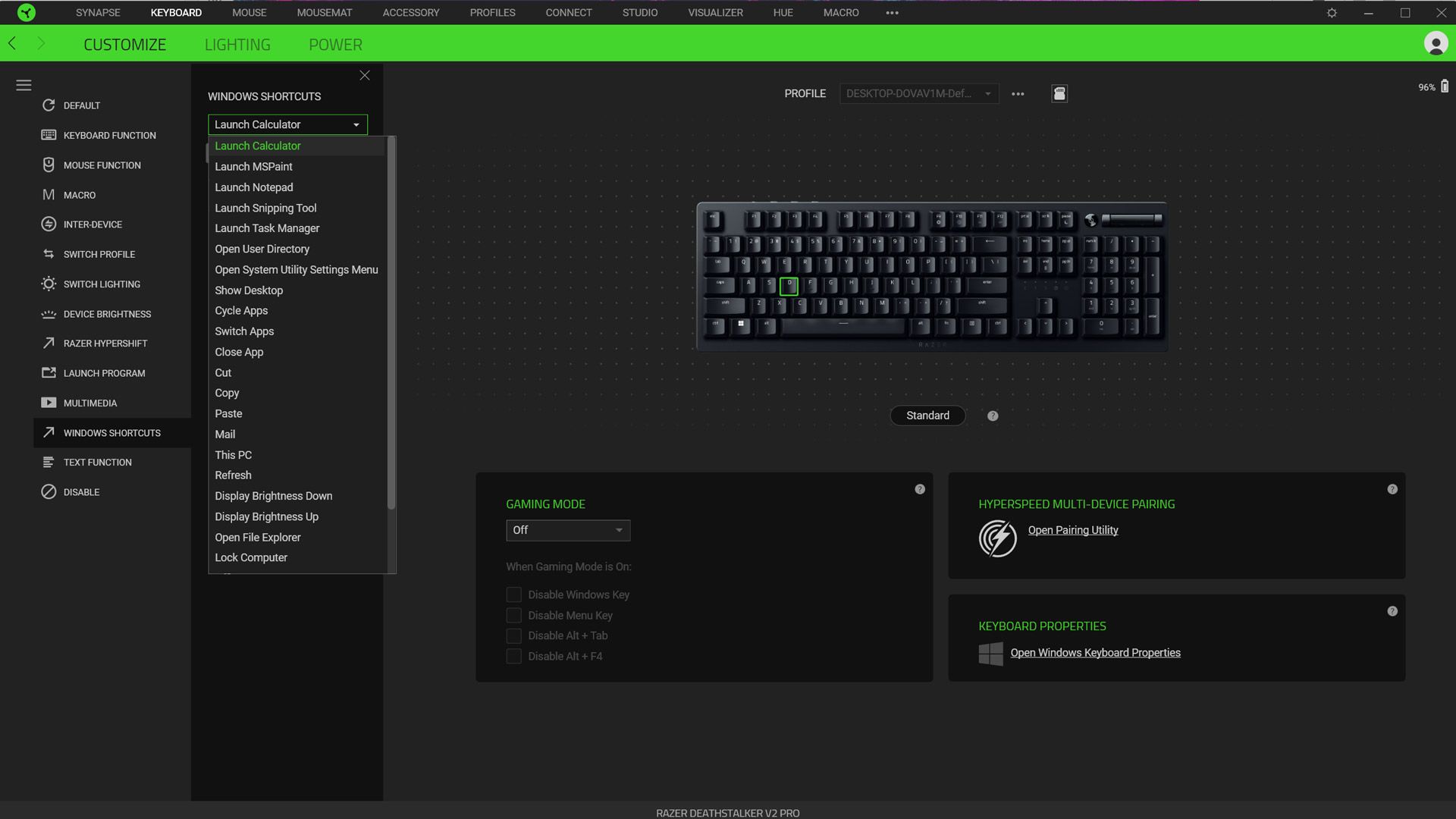 For gaming, the keyboard is exceptionally good. I worked my way through Doom Eternal, blasting away demons completely wirelessly and never once had a hiccup with connectivity. The switches made movement breathlessly easy, even on high difficulties where intense battles can turn sour quickly. In Elder Scrolls Online, that responsiveness isn’t as necessary, but it was nice to be able to have a makeshift macro pad on my right hand.

Price, well, that depends on where you look. At $249, the DeathStalker V2 Pro is an expensive, if feature-rich, keyboard. The Logitech G915 is the same price through Logitech’s web store but can frequently be found for $20 less through Amazon. For my money, I would take the DeathStalker V2 Pro every time. The added connectivity and durability are well worth the added investment, but for gaming, you want the best of the best, and that’s Razer. Logitech cannot compete with these optical switches. 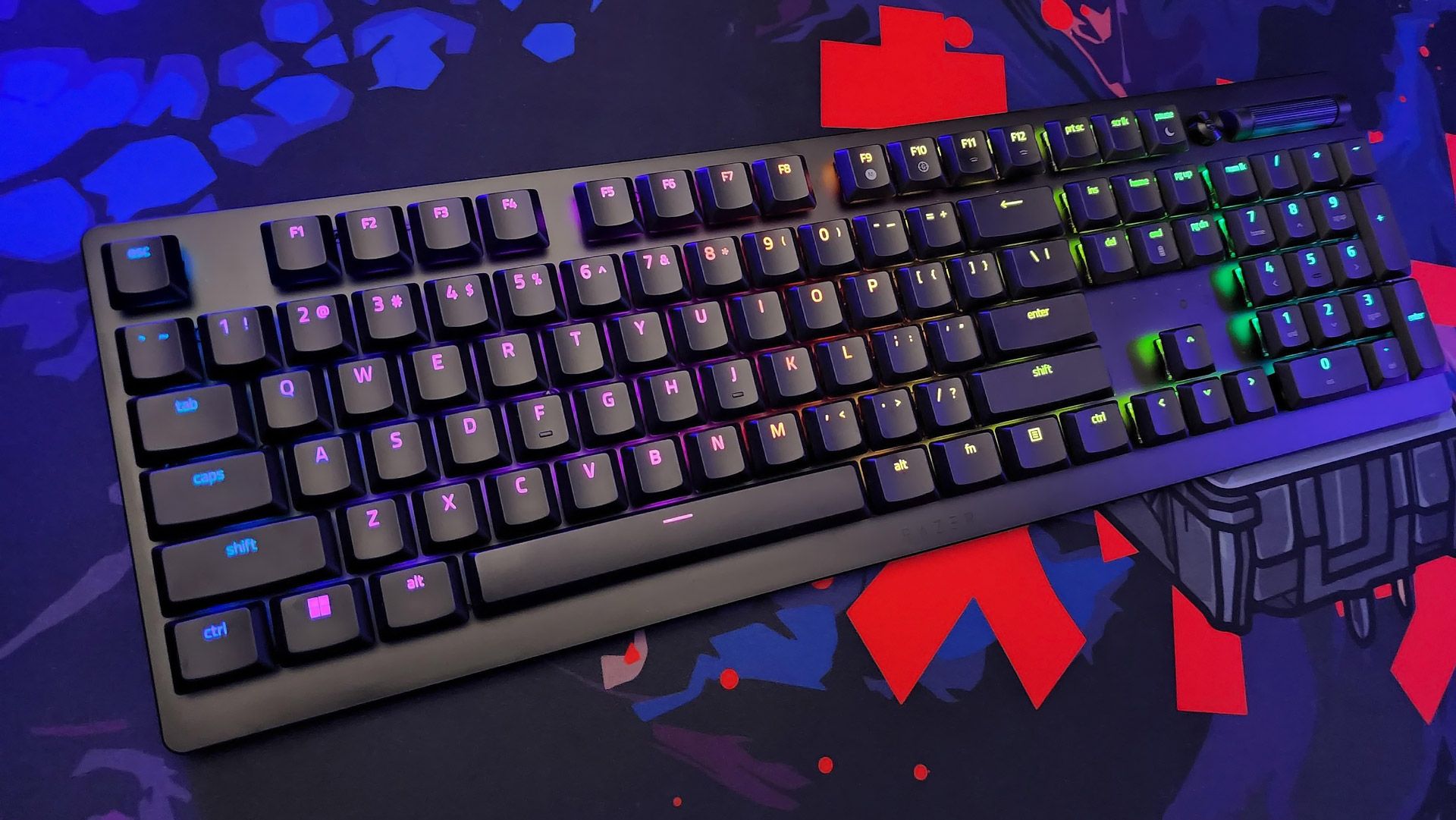 Still, for $249, I would like to see more. More switch options. More visual flair. More accessories in the box. It’s a high price to go toe-to-toe with a keyboard that’s been out a few years already and even a slight undercut to Razer would have really sold the great value it offers.

The Razer DeathStalker V2 Pro is a great keyboard at what feels like too high of a price for the current options. It brings a lot to the table, but is also limited in other ways, like switch choice and overall battery life. Cost aside, if you’re looking for a high-performance, low profile gaming keyboard that’s made to last, this is the best on the market today.