Razer recently refreshed one of their most popular mice with the DeathAdder V2 Mini. Noticing the lack of options for ergonomic mice in the ultralight scene, the company sank their fangs in and bundled all the great features gamers have come to expect from the DeathAdder line, which across its variations has sold over 10 million units worldwide. Will this small feature-packed mouse win over the gaming community or does shrinking the DeathAdder remove the feel and flow gamers have come to love? 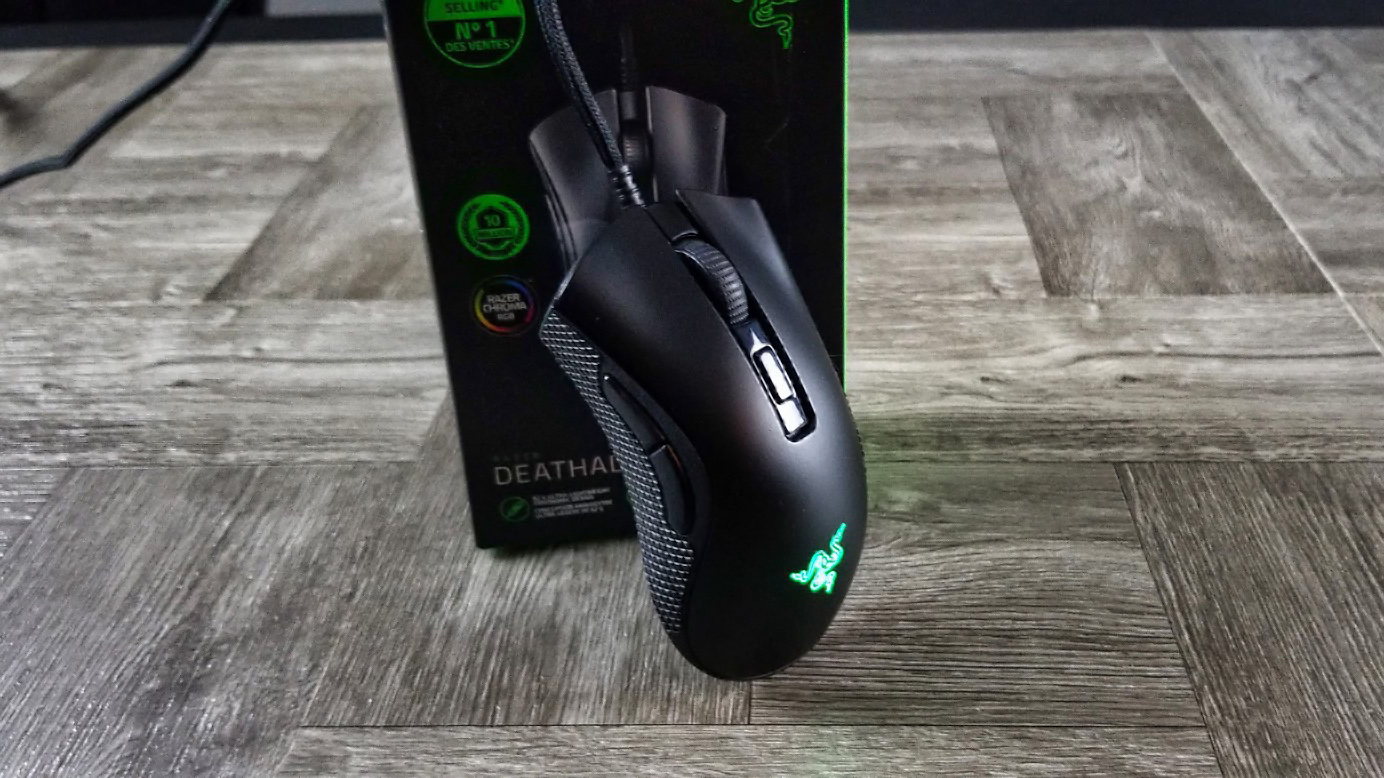 The Razer DeathAdder V2 Mini is the latest iteration of one of the gaming world’s most popular and well-proven mice. This time around Razer has decided to cater to the gamers with smaller hands while simultaneously expanding the options in the ultralight market. Smaller the original DeathAdder V2, the Mini features a grip width of 56 mm and an ultra-light 62-gram weight. This mouse is best suited for fingertip and claw-gripped gamers, but can even be used with a palm grip. While this may vary depending on your exact hand size, I personally enjoyed the precise control and grip provided by the smaller dimensions.

Razer opted for a more minimalist approach to the packaging here. I do miss the fancier boxes that come with their flagship peripherals, but the V2 Mini is more cost-effective and enables gamers to get a higher quality mouse at a reduced price partially because of that simpler packaging. The colorful graphics and details are enough to catch the eye and make it stand out on a shelf, though. Inside the box you’ll find the mouse, optional grip tape, information booklet, and, of course, the famous Razer snake logo. 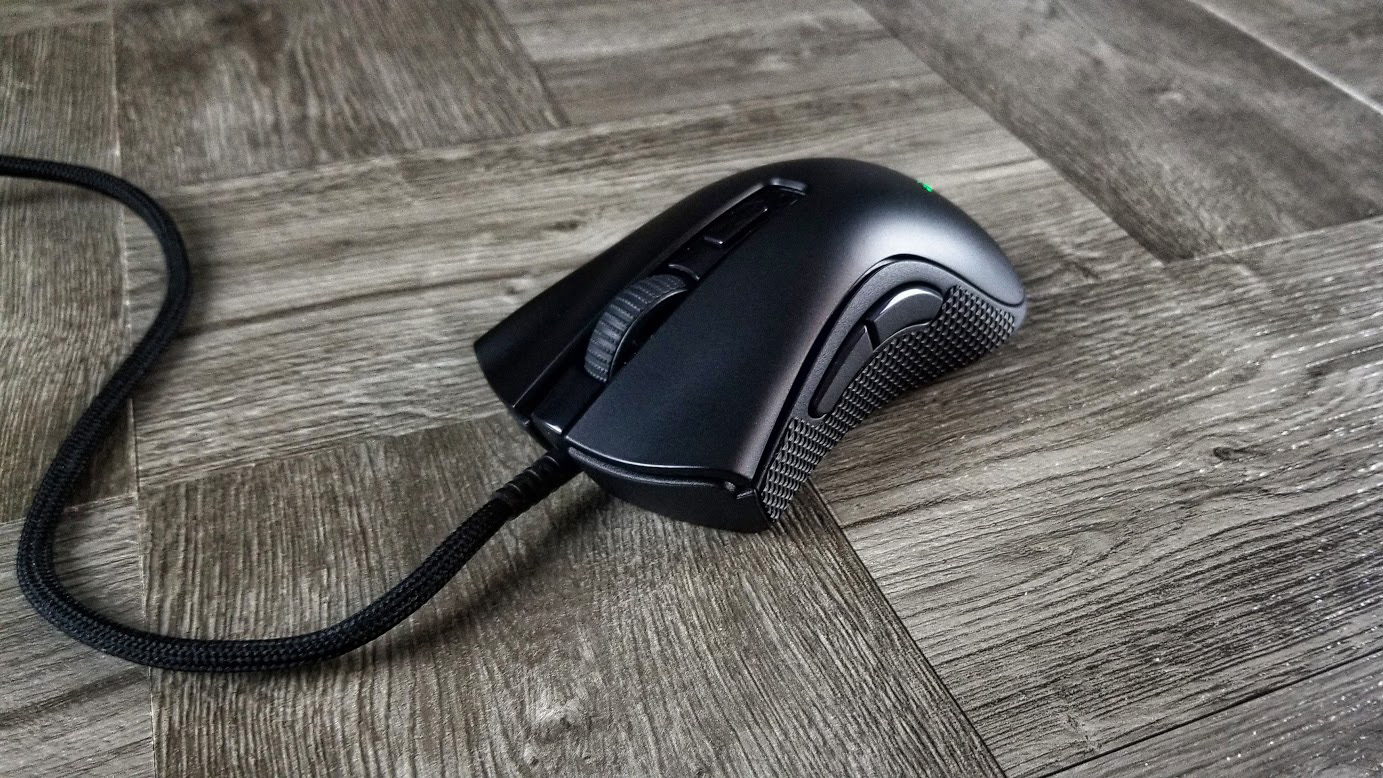 Ultralight mice have definitely become the trend over the last year or so.  Razer has thrown its hat into their ring with previous mice, like the Razer Viper Mini, so it comes as no surprise that it would bring the famous DeathAdder into the space as well. The V2 Mini weighs in at 62 grams, and you can definitely feel the difference compared to its bigger brother which weighs 82 grams. Combined with the PTFE mouse feet, the Razer DeathAdder V2 Mini effortlessly glides to provide quick action response times in games such as first-person shooters. With a maximum tracking speed of 300 IPS (inches per second) there were no issues with tracking movements in games like CS:GO or Overwatch.

By and large, the V2 Mini and original V2 are remarkably similar. They each feature Razer’s Optical Switch (Purple) with a lifespan of 70 Million clicks, RGB lighting, and programmable buttons. Their shape and overall feel are also similar; however, there are some differences to maintain its accessible cost.

Let’s look at the scale backs. The Mini’s top speed is 300 instead of the V2’s remarkable 650 IPS. The Mini has only a single profile for onboard memory instead of five. It’s sensor is also a PixArt 3359 versus the outstanding Focus+ 20K sensor in the V2 or the 5G Optical sensor in the DeathAdder Elite. This change  brings with it a reduced DPI of 8500 from 20000. Typically playing with my DPI set to 4500 I had no issues with the decreased DPI Range. The 3359 optical sensor is “gaming-grade” while being on the lower tier compared to the majority of razer’s other products.

These changes place the V2 Mini in a much more accessible category for budget conscious PC gamers, and, in my estimation, are smart adjustments that the vast majority of gamers will never be able to tell are any different. They are, to be sure, but in normal gaming, you’re unlikely to hit the maximum tracking speed or to use that 8.5K DPI (with some exceptions if you’re a fan of low sensitivity shooters). 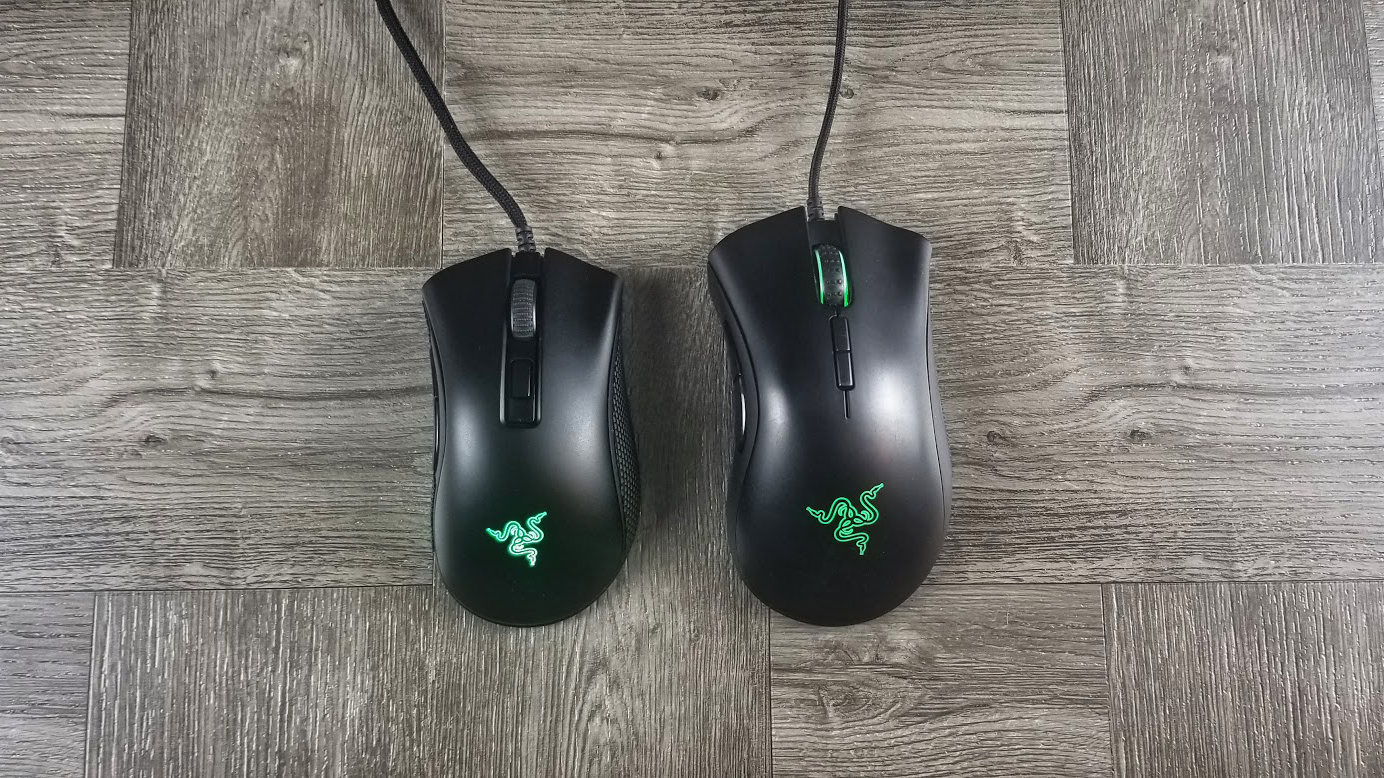 So, with a somewhat different approach, Razer has opted to not implement mouse grips by default. Instead, they have provided them as a peel and stick option that gamers are able to apply or not as their preference dictates. Without the use of the mouse grip tape, I found a loss of control and would even lose my grip entirely due to the smooth surface of the mouse.  Once applied, the grip tape provided much-needed friction and overall increased precision. Special note, Razer will offer optional Mouse Grip Tape as an accessory for a select number of mice that includes: Viper/Viper Ultimate, Basilisk Ultimate, Basilisk V2/Basilisk X Hyper Speed, DeathAdder V2, and the Viper Mini. The MSRP will be $9.99. 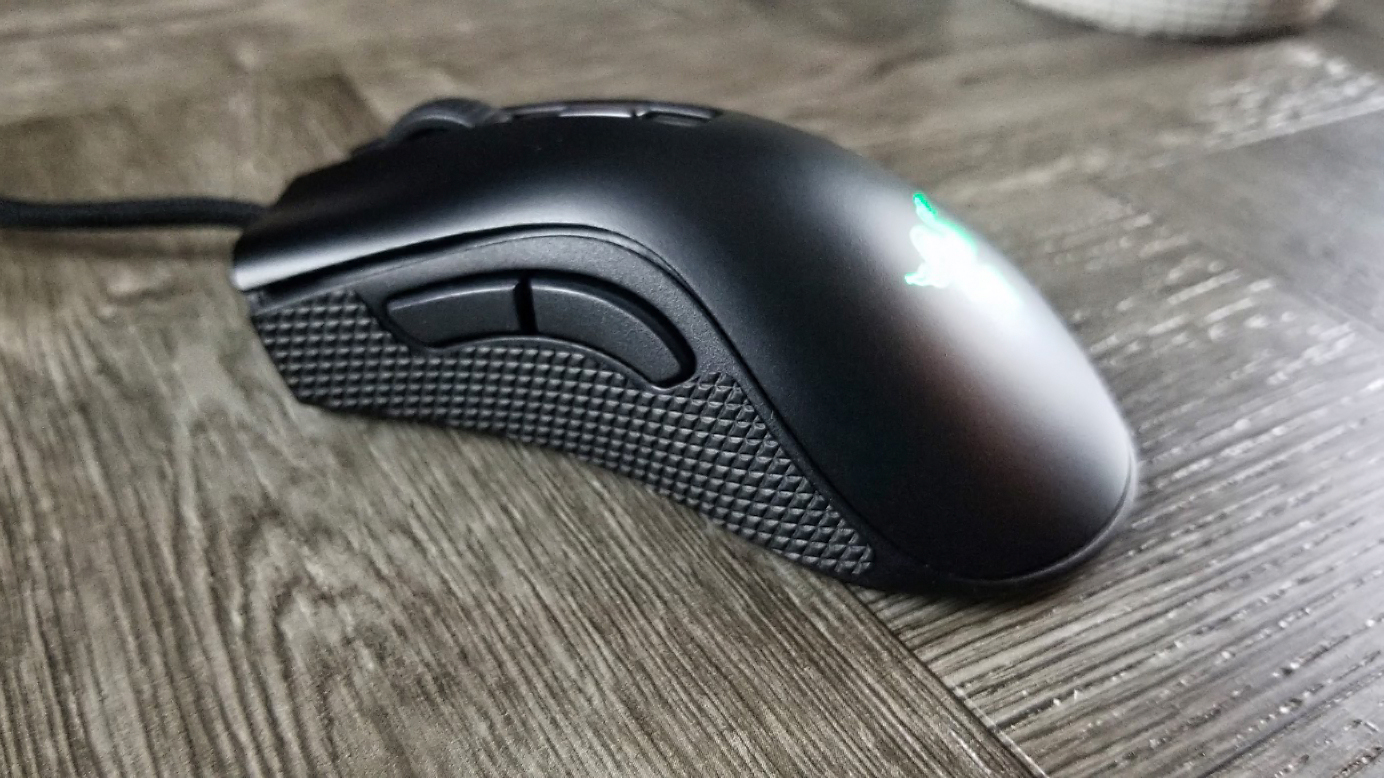 The shell is very well built and feels good and solid in the hand. Razer has demonstrated a penchant for high quality in the structure of their mice, particularly at ultralight weights when the competition is leaning into honeycomb designs. That sentiment is definitely carried over to the Mini as well. The Mini is a small mouse, which is how it keeps its weight low, but I was able to feel how solid it was right from the start. Even after several hours of gameplay, that impression remained and has held true since (especially with the grip tape). I also liked the placement of the buttons, which are intuitive and well placed, just like the original, which allowed me to focus on what I was playing instead of locating buttons. That said, this is a standard 6-button mouse, so you may find yourself limited if all you play is MMOs. The finish also did a good job of resisting fingerprints and smudges.

Using the DeathAdder V2 Mini as my daily driver after months with a bigger and heavier mouse, I forgot what I was missing with an ultralight. From playing various games to precise photo editing, I found the lightweight design allowed me to work with less fatigue. Being suited for small/medium hands, this was right up my alley: my hand fit comfortably even using my preferred grip style (palm). While this mouse may not replace my current desktop daily driver full time due to the reduced button count, it still goes with me everywhere while I am at work or in the field. This mouse fits perfectly in my backpack next to my gaming laptop ready to help me do some fragging on my lunch break.

Finally, we come to software. The DeathAdder V2 Mini uses Razer’s Synapse 3 software. Evaluating the configuration for the V2 Mini proved to be simple and intuitive, allowing for control over each of the six buttons on the chassis. You can also use the HyperShift to have an entirely different set of actions (nearly double the available button count). This mouse features full spectrum RGB with one lighting zone, that of the Razer logo on the palm rest. Installation was simple: plug in and you are off to the races as a self-installer launches. Though Synapse is not required to use the V2 Mini, I highly suggest it as it allows for more control and customization over your experience. 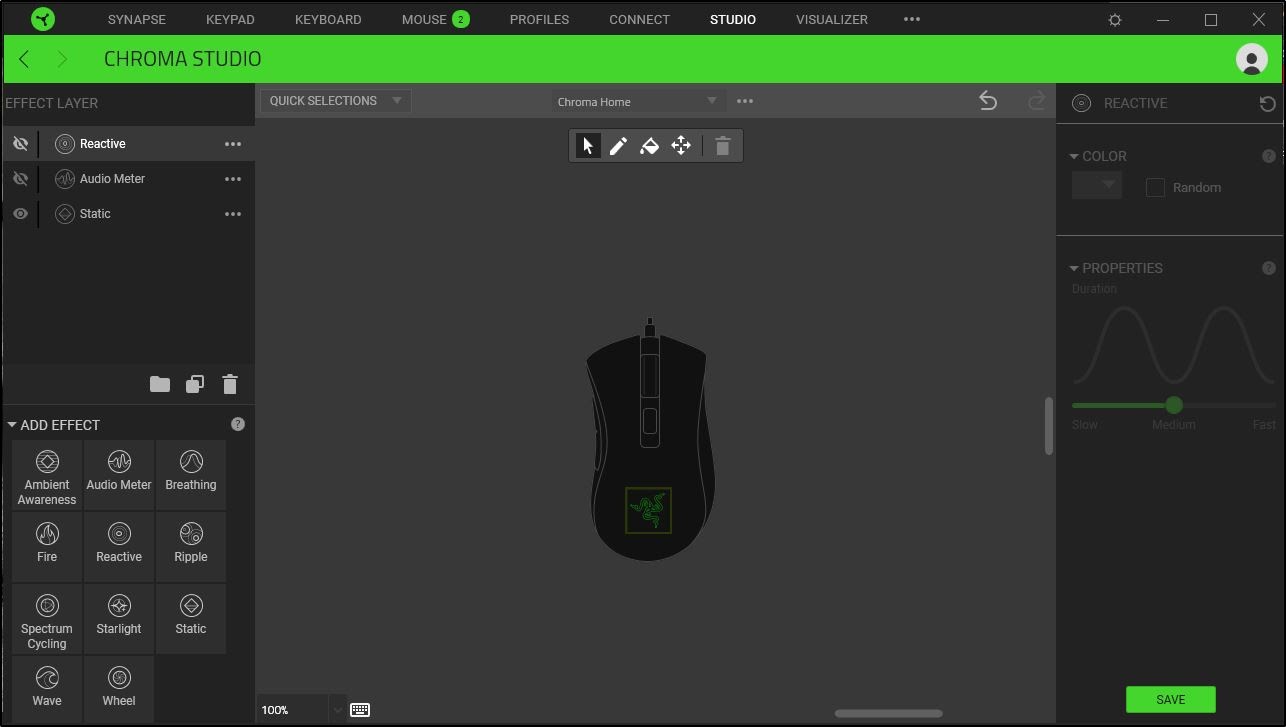 Razer has a long history of refreshing their mice to keep their tech up to date and provide the best  advantage to gamers. It was very refreshing to see a mouse aimed at gamers with small to medium hands. Even though it won’t replace my daily driver (the Razer Naga with its plentiful button count), I do feel that this mouse is a great fit for on-the-go gaming or even as a mouse for a younger gamer. Recently, my daughter has started to show interest and right away the V2 Mini was her first choice due to its form factor. So, if you are looking for an ultralight mouse that caters to smaller hands and smaller budgets without leaving you at a disadvantage, this may be the perfect pick.