If you’re looking for a mouse that you can customize inside and out, this is it. At $109.99 for the wireless version and $59.99 for the wired, the brand new Ultra Custom Symm 2 from Pwnage offer enough options to make them truly your own while also having the specs to deliver in even the most demanding scenarios. Are they worth a buy in a more-crowded-than-ever marketplace? Find out in our review! 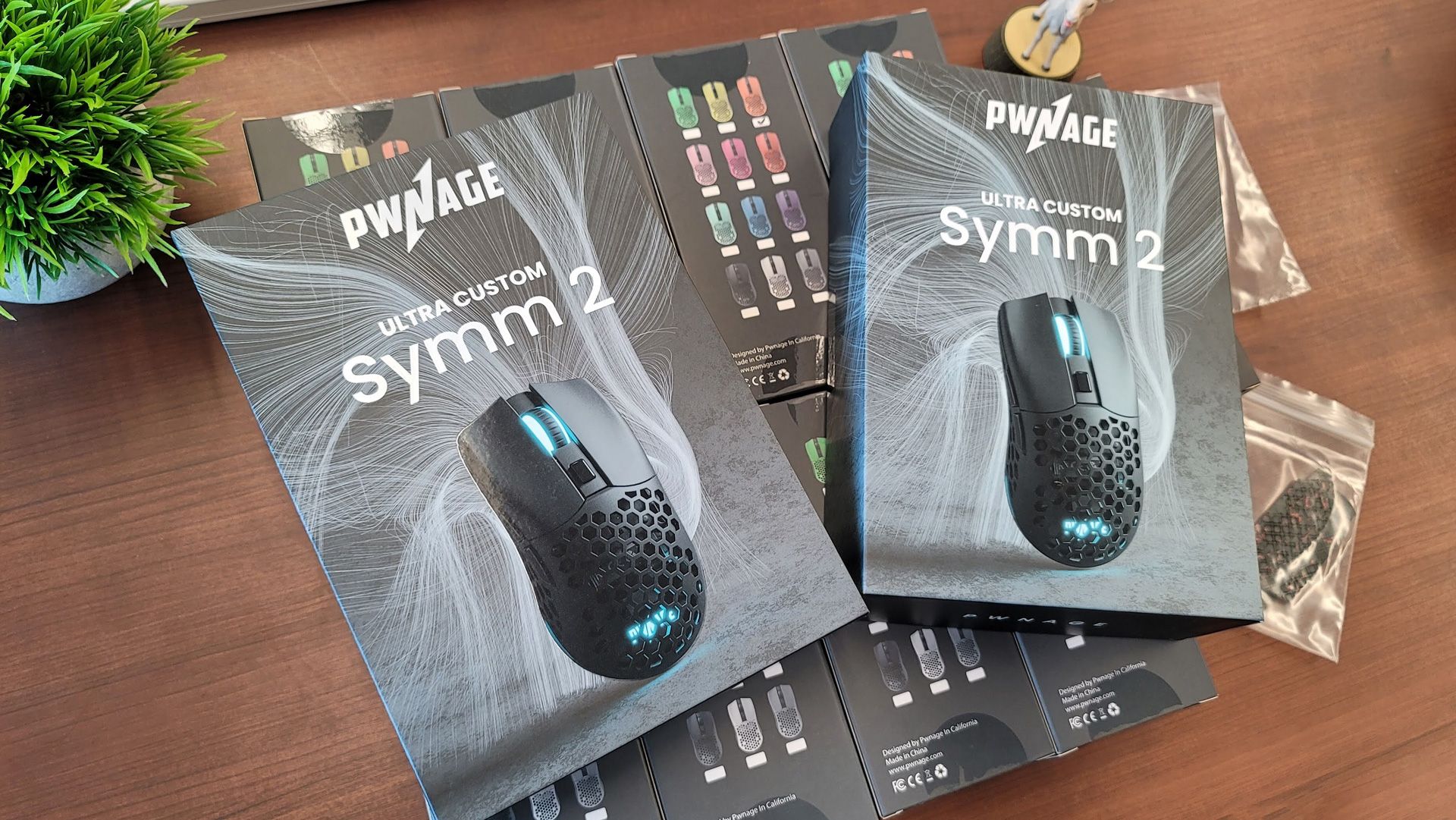 If the eSports and battle royale craze has done one thing, it’s explode the peripheral market. As a result, there are more options for high quality gaming mice than ever before and at every price bracket. Companies that want to stand out have to deliver something special, and that’s exactly what Pwnage has set out to do with the new Ultra Custom Symm 2.

This mouse, available in both Wired and Wireless versions ($59.99 and $109.99 respectively) marry high-performance specs with chart-topping customization options. Whether it’s the solidity of the mouse (solid or honeycomb), the color, the weight, the responsiveness of the switches, or the tactility they offer, the Symm 2 has options to dial it in to exactly your preference. Pwnage also sells patterned vinyl grips to add further customization, available in Phantom Mint for white mice and Carnage Red for black.

When it comes to specs, it delivers. Whether you opt for wired or wireless, you can count on a one-millisecond response time thanks to the 2.4GHz wireless dongle. The sensor is PixArt 3370 optical sensor that with a wide DPI range of 50-19,000. Its tracking is fast and accurate with a maximum speed of 400 IPS and 40G of acceleration. There’s no smoothing or angle snapping to throw off your aim, it’s just true, high-fideltiy tracking that can compete with the best gaming mice on the market today, and also allows for incredibly low lift-off distance of only 1mm. The switches under the triggers are also Kailh 8.0s and allow you to drop the debounce time right down to zero if you so choose. Its quite impressive stuff.

Both versions of the mouse fall into ultralight territory, depending on your configuration. The wired version can be taken as low as 59 grams with the honeycomb body and cover or raised as high as 82 grams using an adjustable weight insert that slides into and attaches magnetically to the body. The wireless version has to hold the battery, so its weight can range from 71 to 75 grams. If you’re a claw or fingertip gripped gamer, you can technically take this lower by removing the top portion of the shell usually covered by your palm, but this doesn’t strike me as practical. That said, I expected it to be more uncomfortable than it actually was. There is no adjustable weight to the wireless version since the battery occupies that slot. 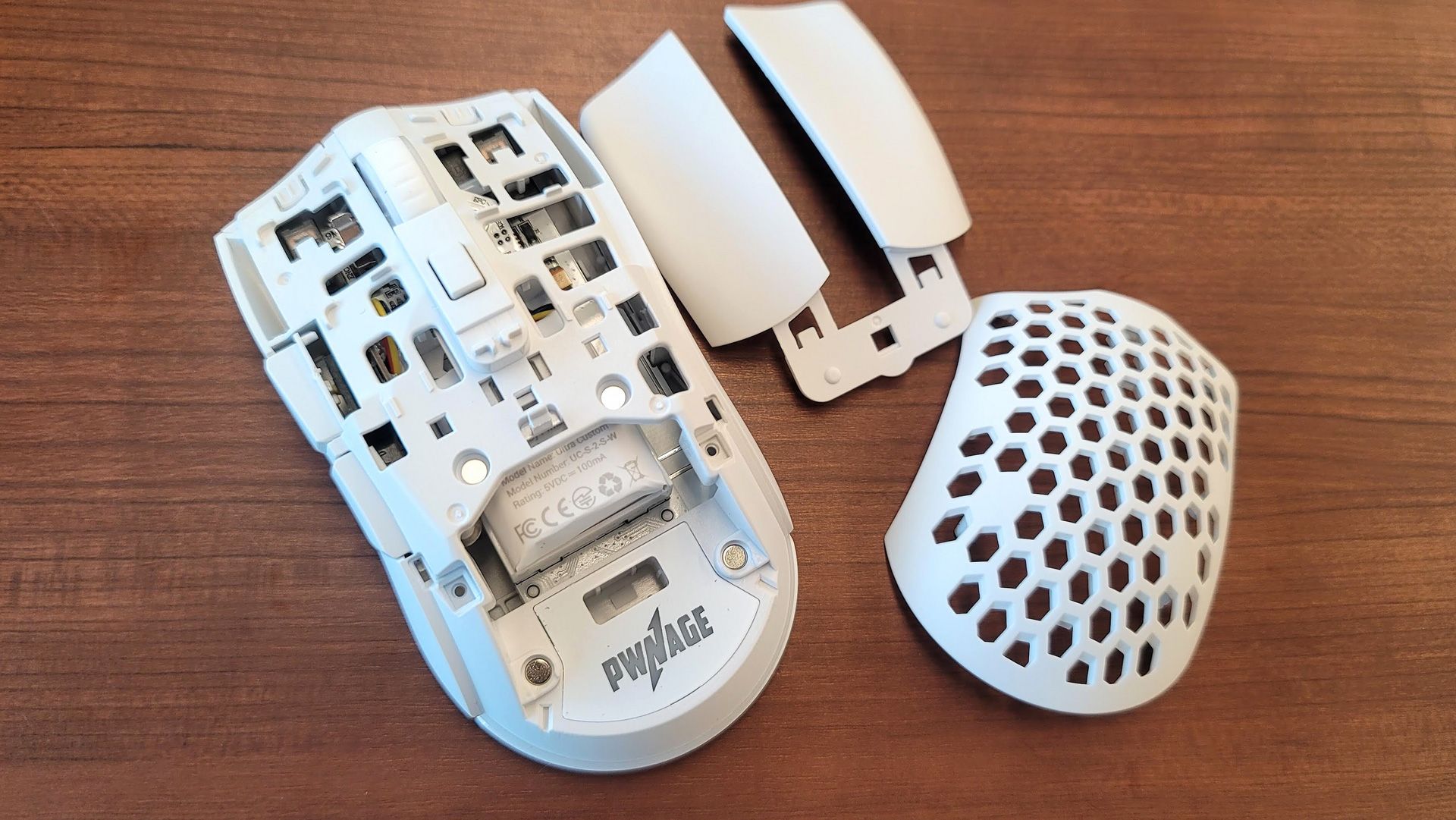 Speaking of the battery, the Symm 2 Wireless has a respectable lifespan thanks to its 100mAh battery. When gaming, it’s able to deliver up to 80 hours. If you lower the polling rate and turn off the RGB — fine for productivity - this more than doubles. Even as it nears its low single-digits, it remains responsive and reliable. Still, I don’t like pushing it that low, so often plugged in the cable when it wasn’t in use (which is a flexible paracord — another high point). It takes about two hours to fully recharge from a dead battery.

Speaking of the cable: it’s great. As are the full PTFE skate. You won’t have to worry about any glide with either variant of the mouse thanks to both of these important components. Pwnage also includes some extra feet and grips in the box for the wired version. 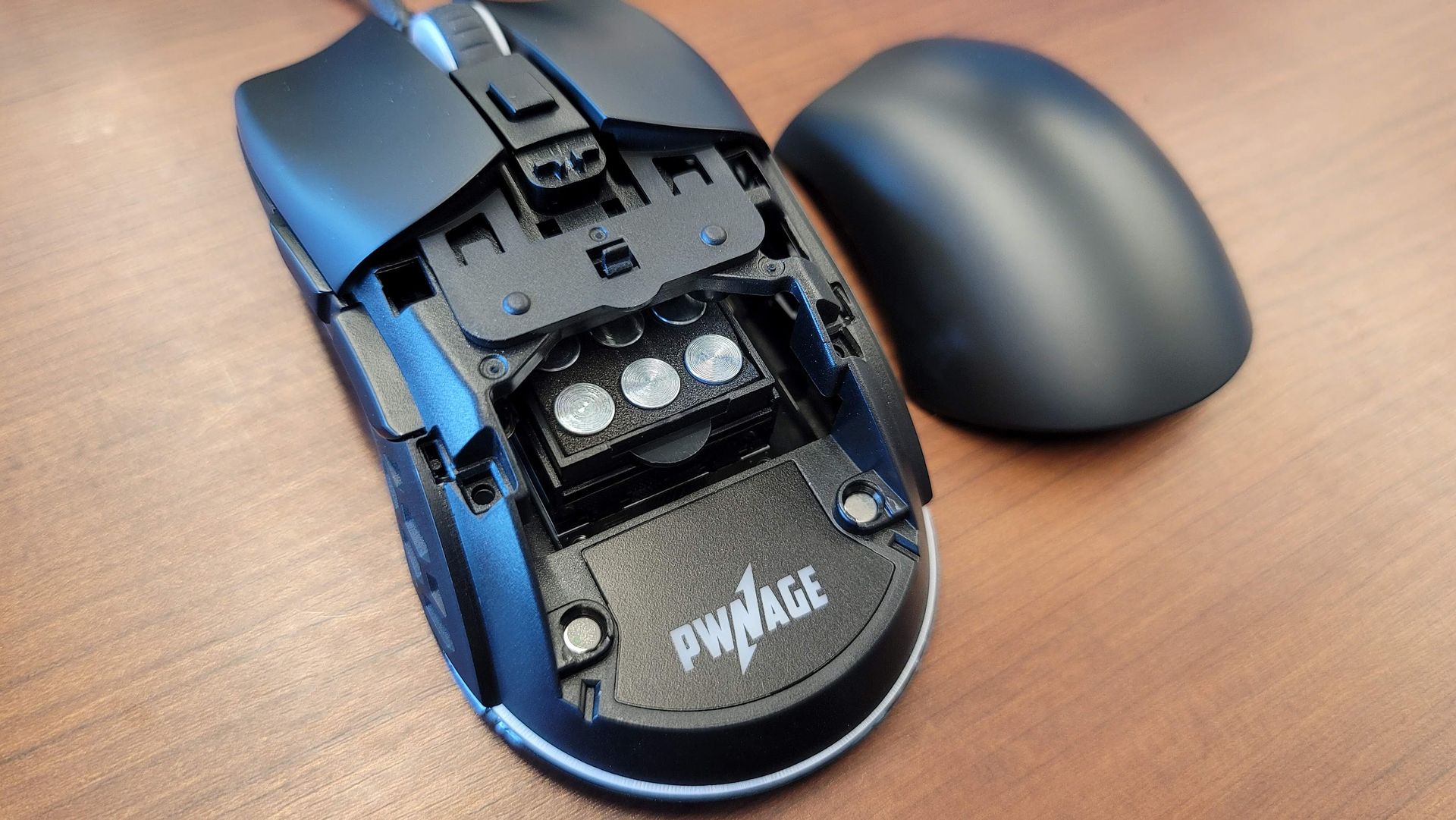 Returning to customization, I was pleasantly surprised at how easy it was to change up the entire look of the mouse. Pwnage sent over a big box of nine different colors of shell and both the Carnage Red and Phantom Mint grips. All told, there are a dozen different shell packs you can buy and each one includes a honeycomb shell, a solid shell, and plates for the buttons.

Swapping parts is easy and tool-free. The shells pull off from the bottom and snap into place when re-assembled. The triggers are held with a single hook beneath the shell and pop into place over the switches. You can change both in less than a minute, and once they’re re-assembled, there’s nothing loose or wobbly to betray that these parts come on and off so easily. Once they’re in place, they feel just as secure as the set that came out of the box.

I’ve spent about a bit over two weeks with the Pwnage Ultra Custom Symm 2 versions using them for everything from work, to normal browsing, and competitive gaming. Pwnage sent me the honeycomb version for the wired model and the solid case version for the wireless, so I’ve had hands-on time with both, and my overall impressions are positive. These are good mice — especially the wired version.

Each feels solid and robust. There’s no flexing or creaking even when squeezed. That’s a common issue with honeycomb mice in particular and always leaves me concerned for the build quality, so it’s nice to see Pwnage competing with the likes of Razer there. 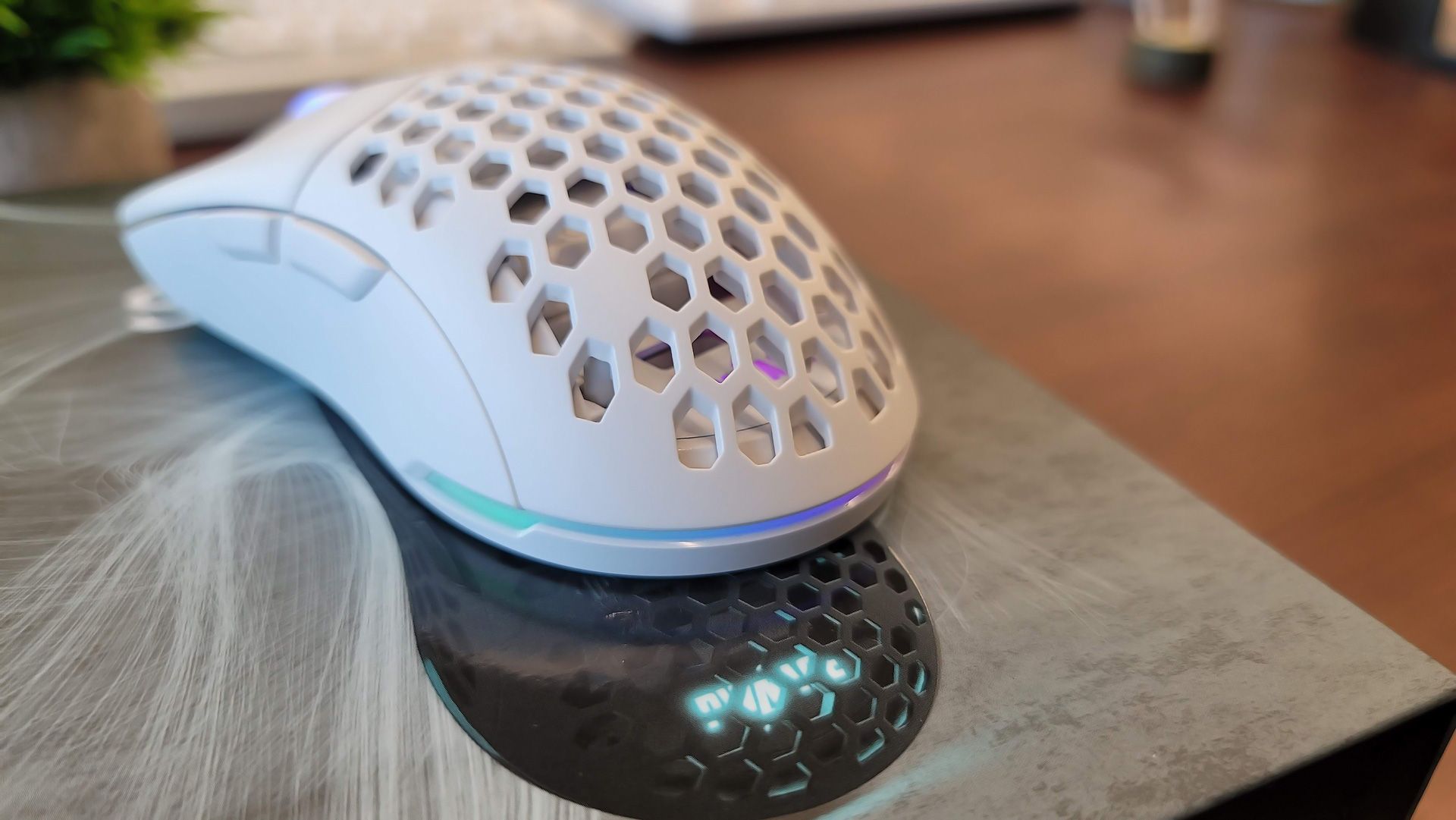 In fact, that really seems to be where the Symm 2 stacks up best, against the Razer Viper. I actually main a Viper Ultimate at my gaming PC and use a Viper Mini at work because I love the shape so much. The Symm 2 is a touch shorter, but is very similar in height and width, making the transition an easy one. Considering what an excellent mouse the Razer is, that speaks very highly of the Symm 2.

Both Symm 2s glide like butter. I tested them on both hard and soft surfaces, including a bare walnut desk and they worked beautifully on each. I found that I preferred the lighter weight of the wired version, however. Both mice are fairly light, but the inclusion of the battery does make it feel noticeably heavier (while still being very lightweight overall). The Wired version at its heaviest is still lighter than the Wireless at its lightest.

Tracking with both mice was great. Even side by side, there was no difference that I could feel in tracking. At the same time the lightweight cable on the Wired version felt nearly wireless itself, so if you’re keen on saving some money, it’s not a bad alternative by any means. I couldn’t make either mouse spin out of jitter in my tests. Tracking was also maintained whether I went high DPI/low sensitivity or vice versa. They got the job done and done well, no matter what I threw at it.

Since there are only six buttons, this mouse is best suited for competitive titles like first-person shooters. These titles will also leverage their ultra lightweight design much better than an MMORPG or MOBA. That said, a mouse is very much about feel, and unless you need those additional buttons, the Symm 2 will work well for any genre you’d care to test it with.

I also found the buttons on the mouse very well done. The Kailh 8.0s feel great and have a satisfying high-pitched click and tactility. I didn’t find any need to use the included spacers beyond normal testing since they felt well-tuned right out of the box (it’s very cool that they’re included for fine-tuning the feel, though!) 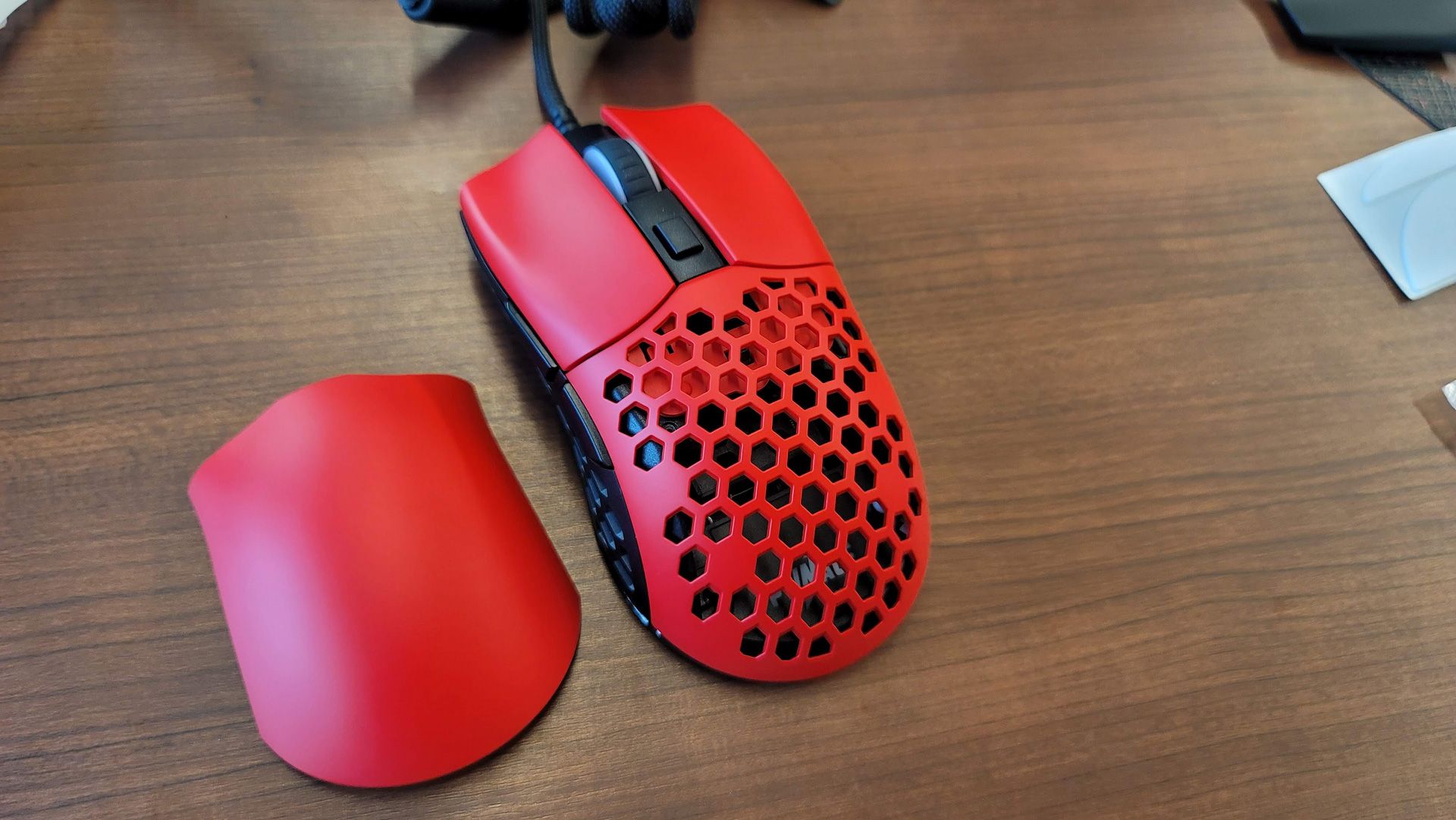 The customization options are really where this mouse excels. I tried lots of different color combinations since it was so easy. In the end, I’m a sucker for white and black which is what I wound up going with. If you have a favorite color, you can tailor this mouse to match for another $12 a pack. I wish that Pwnage allowed you to choose an additional color to be included in the box (especially for the pricier Wireless version), but it’s understandable that this would cost extra.

My biggest issue with these mice has nothing to do with performance or feel, it’s pricing on the Wireless model. At $109, the Wireless is cheaper than the Viper Ultimate, but it also lacks any kind of wireless charging base — a feature I’ve grown to absolutely love with the Viper. It’s also releasing in a market where the Glorious Model O Wireless is highly competitive at only $79.99. You’re paying for performance, but you’re clearly being sold on the modularity that the Model O and Viper lack. Whether it’s something you’re likely to take advantage of should be a major consideration when choosing between these three tightly competing mice. 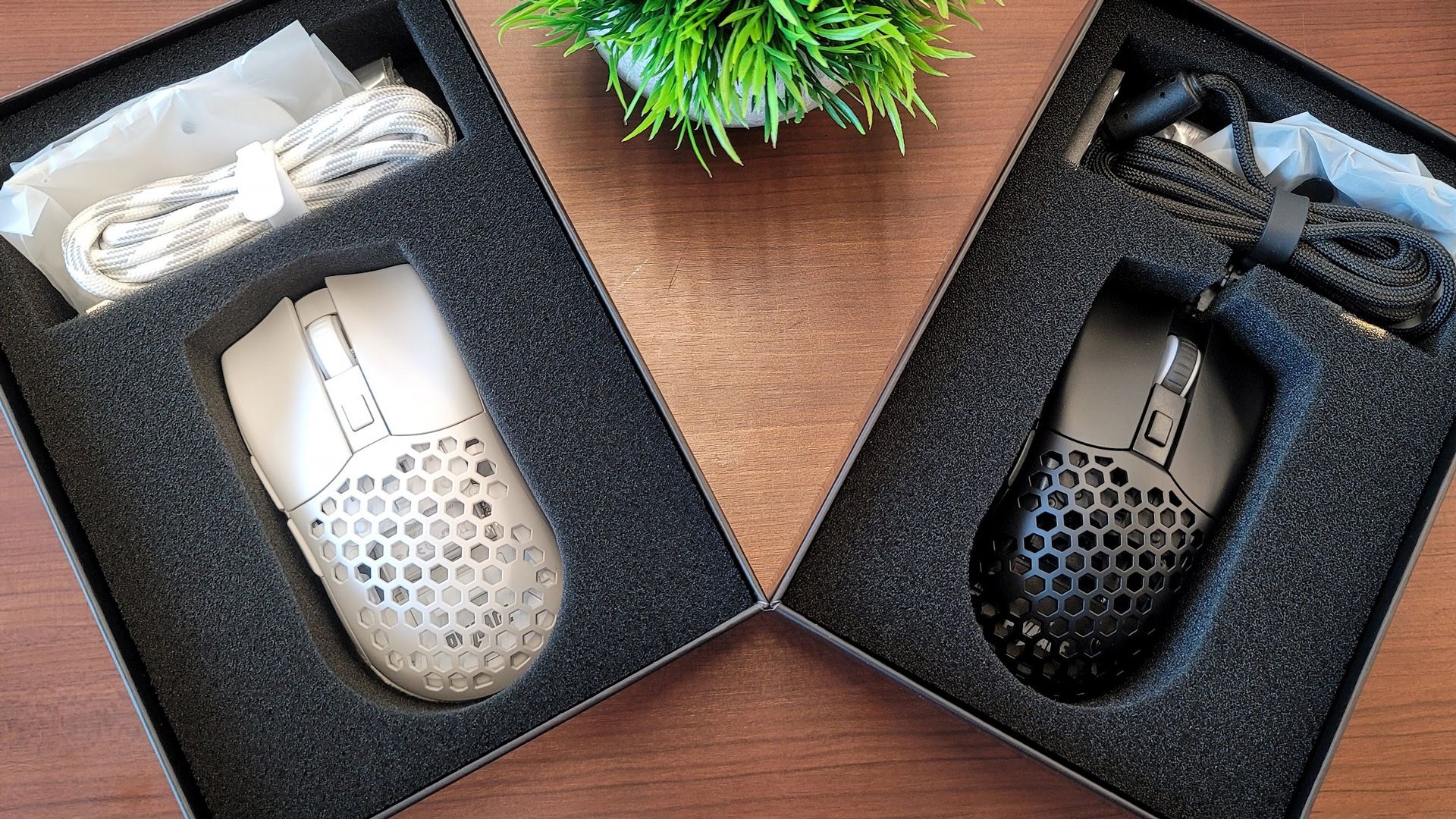 At $109.99 for the Wireless version and $59.99 for Wired, we have two mice that feel and perform great and offer a level of modularity and customization the competition just lacks. If you’re looking for a mouse to truly make your own and don’t want to turn to a pricey custom shop to do it, these are great options.