When you want accurate, detailed sound, you turn to companies that make it craft headphones designed for the pros. PreSonus made its name on delivering excellent studio and live performance gear, so when I heard they had released their first-ever Bluetooth headphone, complete with Active Noise Cancelling, and it would retail for only $129.95, I knew we had to take a look.

Today, we’re looking at the PreSonus Eris HD10 BT Professional headphones. Looking for something to take on the go without breaking the bank? Let’s take a closer look and find out if this is the headphone for you. 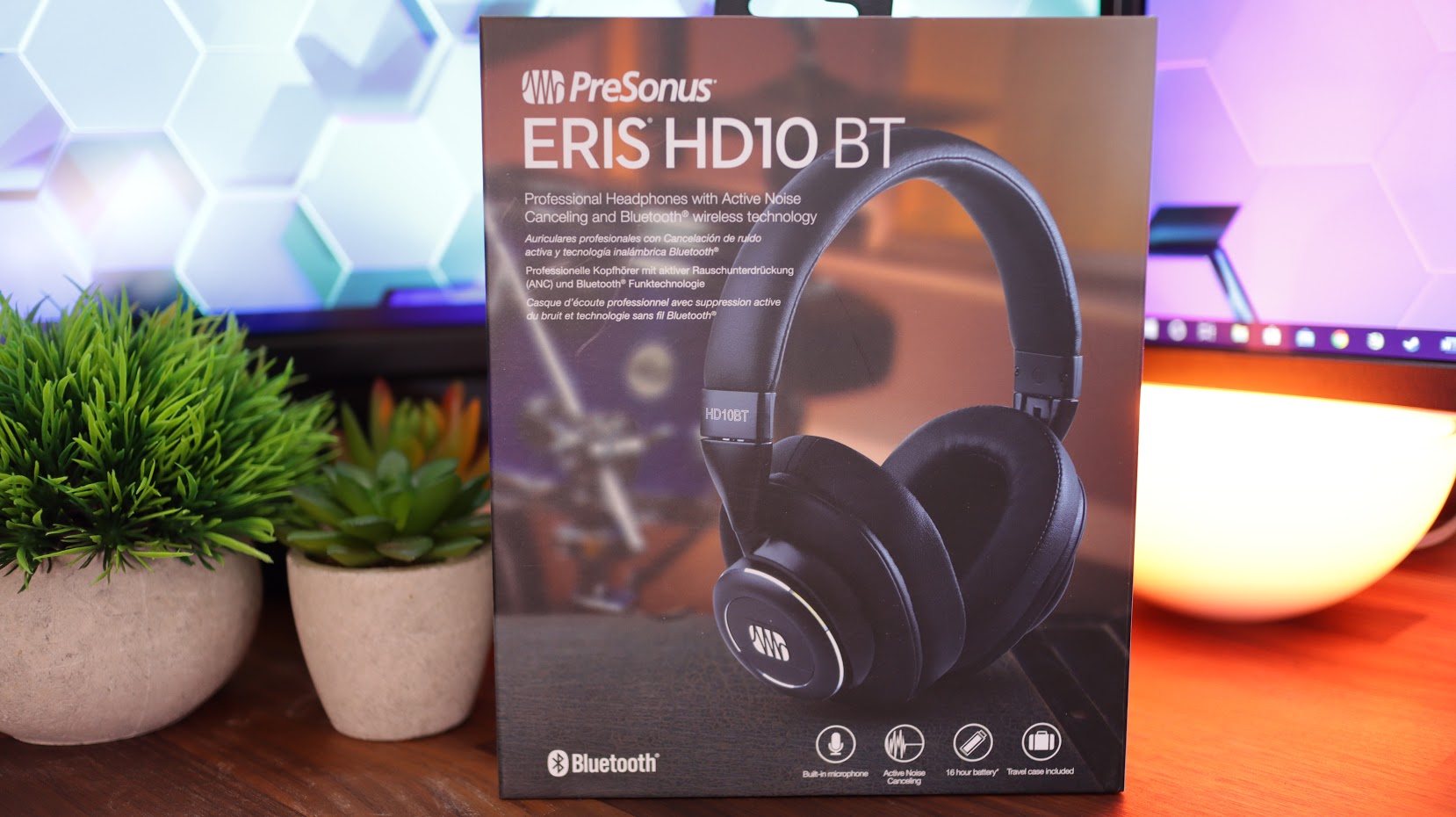 The Eris HD10 BTs make a great first impression. They arrive in a box that’s nice enough to put on display after you’re done unboxing. 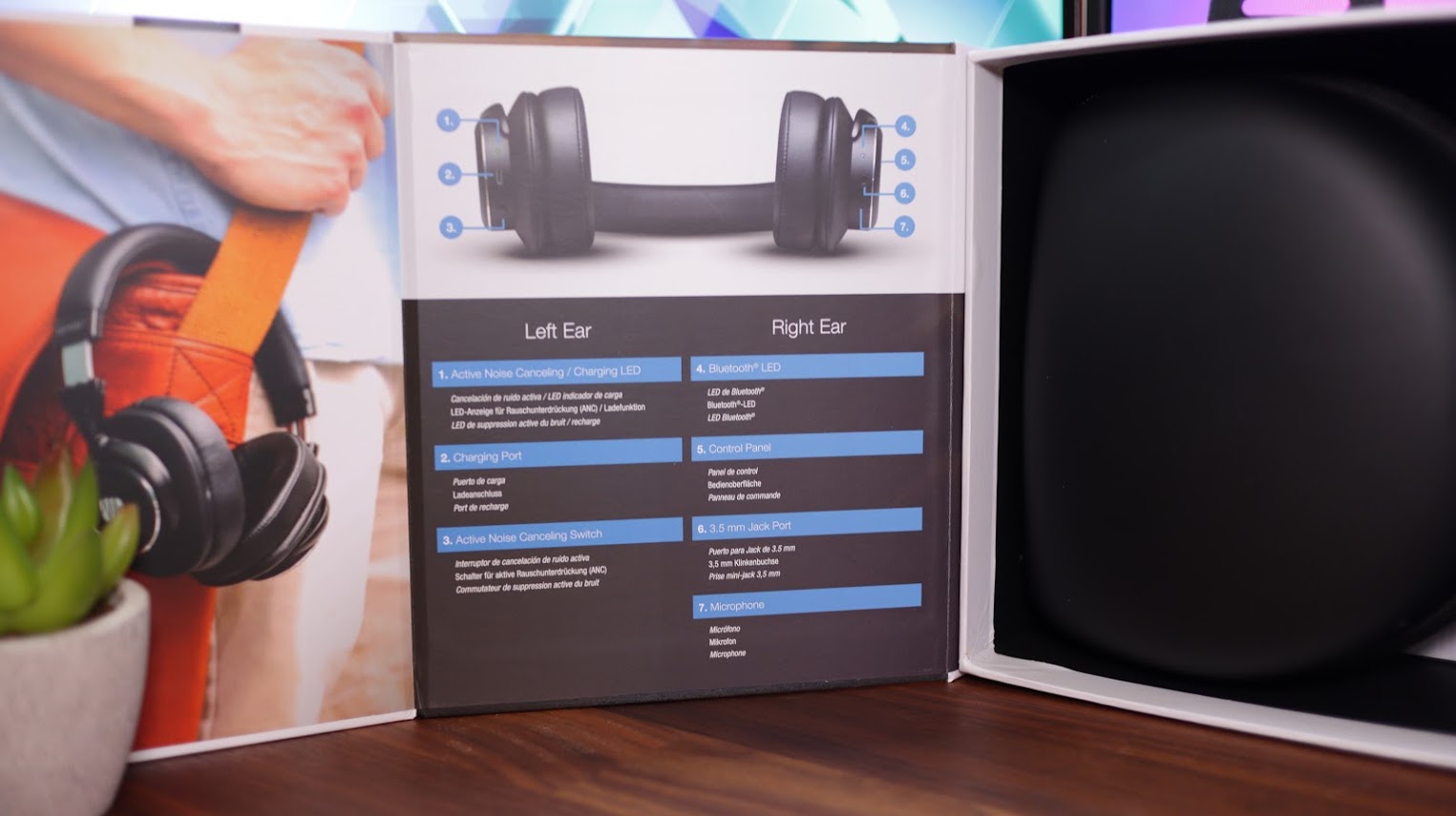 Inside, you’re greeted with a nice rundown of the different features to get you up and running, as well as the generous hardshell case you can use while not rocking out to your favorite tunes. Inside the case, you’ll find the headphones, collapsed down to their smallest state to fit perfectly within. Tucked alongside is a 3.5mm  auxiliary cable with a 1/4-inch adapter and a micro-USB charging cable. 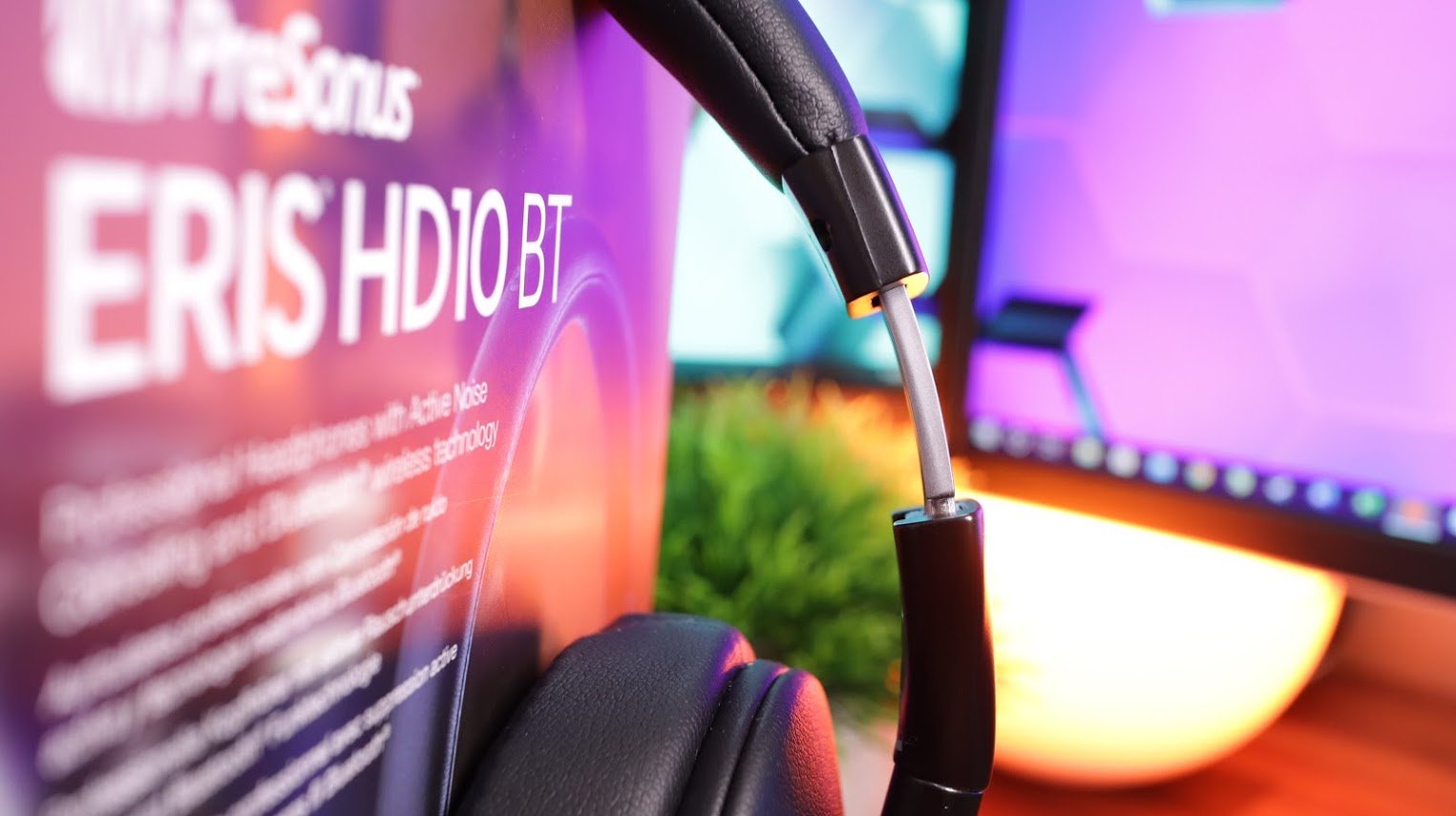 The Eris HD10 BTs combine slick looks with one of the most solid builds I’ve seen on a headphone yet. The adjustments are thick, rigid metal. Under the cushioning further up the arc, you can tell that this gives way to a thinner, more flexible metal, but the can stretch and twist without ever creaking or showing the strain. The yokes and driver housings are also metal, though the outer shell is trimmed all around in faux leather.

Unfortunately the same can’t be said for the volume and power controls on the left earcup. They’re plastic and have enough play that they can wiggle and shift position slightly.  The ANC switch on the left earcup is also plastic, but feels solid and has a satisfying snap.  Right next to it is the charging port which is micro-USB instead of the much preferred Type-C. Compared to the rest of the build, the volume controls and last-gen charging port are steps down from the rest of the build, even if they haven't had any problems in day-to-day use.

The ear cushions are soft and generously thick. They’re also trimmed in a soft, leather finish that I found very comfortable against my skin. They also support the headphones’ noise canceling properties by blocking out more outside noise. The cushions aren’t removable, but I don’t see that as much of a problem given the price point and how nice the included set is.

Taken in moderate bursts, I found the Eris HD10 BTs to be quite comfortable. The clamping force is very moderate (perhaps a bit too moderate, which I’ll get to later), so my ears never became prematurely fatigued. The ear cushions are also soft enough and deep enough at 3/4-inch thick that my ears weren’t pressed against the drivers. I wish PreSonus had used a bit more padding on the headband, though. At 340 grams, the headset is fairly heavy and the top of my head became a bit sore after an hour or so of listening. I keep my hair short and am notoriously sensitive to headsets on the heavier side, so your mileage may vary. 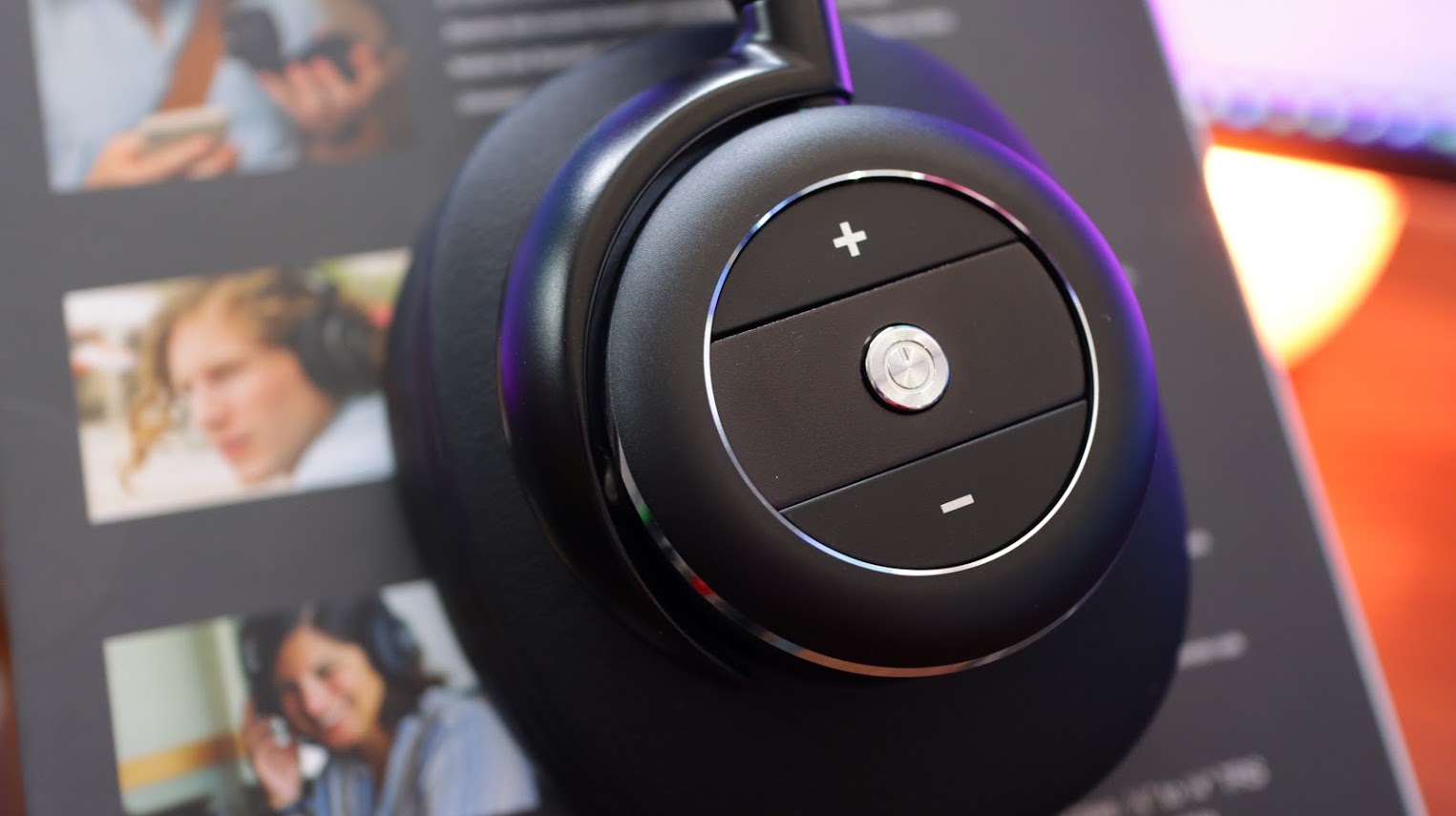 I really enjoyed the sound profile PreSonus dialed in for these headphones. The Eris’ offer a very fun sound with a full lower end and very present vocals. Treble is a bit recessed to my ear, more present than your average pair of Skull Candies or Beats, to be sure, but they avoid the audiophile tuning that draws out extra detail in the highs at the expense of ear fatigue. By contrast, the Eris’ HD10s have such a comfortable, easy sound, I could listen to them for hours.

Listening to Brand New’s Degausser, the relatively close soundstage and wonderful positionality, felt almost like listening to the band in a loft, intimate yet somehow avoiding harshness even as Jesse belts out his pained chorus. For metal, like Bullet for my Valentine’s Letting You Go I found myself inching the treble up slighting to give the guitars their distinctive edge. Depending on your taste, a little EQing might be necessary, but they’re very resilient and didn’t break up until I jacked the bass beyond a listenable level. In real life, you could easily tweak the tuning to match your perfect curve.

For gaming, the Eris HD10s are decent but I actually wouldn’t recommend them if that’s all you want them for. Stereo imaging is great, so you won’t be at a disadvantage in close quarters shooters, but for larger spaces, the smaller soundstage doesn’t impart the sense of space a surround sound headset might. That said, it’s certainly possible to fix that through free Windows features like Windows Sonic.

Purists might scoff at the idea of having to use Windows Sonic to “fix” a soundstage issue for gaming, but then, these aren’t made to be a gaming headset. If you can turn them into a decent gaming headphone by simply checking a box inside your Control Panel, and also save yourself money by not buying multiple headphones,  that’s a pretty welcome “fix” in my opinion — especially when you’ll be hard-pressed to find a gaming headset or name brand headphone with Active Noise Cancelling at this price point.

The noise-canceling here is decent but doesn’t compete to ANC heavy-hitters like Sony, Bose, or Audio-Technica. It works very well from droning noises, like engines or running water, but is less effective at more intermittent ambient noise like chirping birds or the Chatty Cathy’s on the back of the bus. That’s where the leatherette ear cushions come in because they can isolate those sounds without using the Eris’s microphone array.

And this is where that moderate grip actually worked against it and you could experience better noise canceling than I did. By just slightly pressing on each ear cup, the noise canceling went from decent to excellent, easily competing alongside more expensive ANC headphones. It was so much better that I even researched ways to increase the grip without bending the headband. I have a smaller head, which I believe is the culprit, and if you’re larger than I am, you may get those improved results right out of the gate.

For $129.95, the PreSonus Eris HD10 BTs are a solid value. I would love to see a version of this headphone that extends the frequency range into Hi-Res territory to cater to the audiophile crowd, and perhaps offers a bit more grip for smaller users like myself. In the two weeks I spent testing them, I couldn’t help but feel like I was missing out on a better ANC experience that they were so close to. Still, with music or a podcast piping in on top, I was able to block out the outside world and focus on enjoying my content, which is really what these are all about. You can see PreSonus’s expertise coming through, but there are a few areas of improvement that leave me excited for the next version.