While there are a plethora of true wireless earbuds on the market that are cheaper than the Padmate PaMu Z1’s, most of them, including ANC, are well over the $100 mark. The PaMu Z1’s are packed full of features that any tech-head would enjoy. They have the latest in Bluetooth, smart controls, low latency for gaming, a robust app, and wireless charging. There is nothing tech-wise these earbuds are missing, but are they “worth it” when it comes to sound quality? I put the Z1’s to the test! 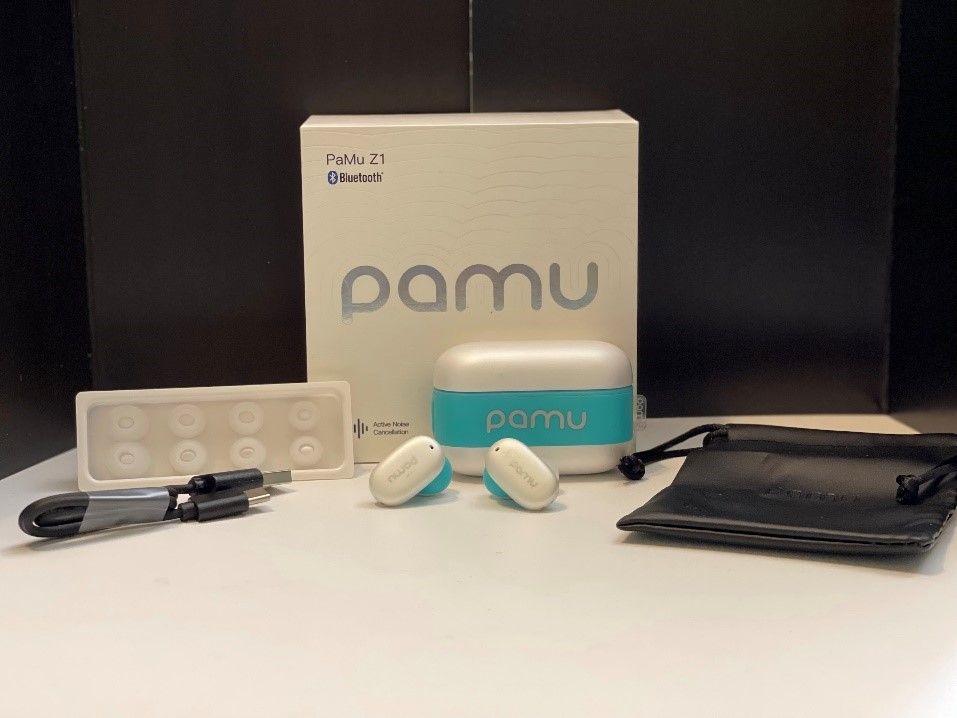 The Pamu Z1’s are beautifully packaged. The box has rugged siding and fancy “pamu” lettering with a semi-holographic design. Opening the box and seeing the earbuds for the first time, I was delighted at how much care was taken with the packaging. The earbud’s wireless charging case is just as pretty to look at. The great thing about the cases is that the stripe with the PaMu name can be changed out for different colors. It simply clicks off and on. To say the least, I was impressed with the presentation of the PaMu Z1’s.

PaMu Z1’s have what is considered the normal battery life. The tech specs claim 6.5 hours of continuous playback and 24 hours with the charging case. After spending over a week testing the earbuds for maximum usage, I got on average of 6 hours for continuous playback in one charge. The earbuds were tested at normal listening volume, about halfway on my iPhone 12 Pro Max and the Pixel 3. This is in line with other earbuds and a number that cost substantially more.

The PaMu Z1’s come with app support for both Android and iOS phones. Before I dove deep into the app, I tried out the tap controls on the earbuds. The controls are a tap function. Typically, I prefer rocker-type controls, but the PaMu controls were extremely responsive to my touch, and most of the time, they did what I wanted. There were times I stopped my music when I meant to turn the volume down, but most true wireless earbuds’ touch controls are finicky. What I did love about the controls was the customization in the app. The user is free to customize the controls as they see fit. More true wireless earbuds need this kind of robust app support.

The app also lets the user pick the equalizer style they prefer. Unfortunately, there is no customization for the EQ, only six different preset. The presets are: normal, rock, vocal, classic, jazz, and pop. I did not notice much of a difference between vocal and classic. The other four settings did sound different, but not different enough for me to want to change between the settings. I just kept the EQ at normal because it had better sound quality.

This is where the PaMu Z1’s started to show their budget pricing. I love that there is a bunch of high-tech features to droll over, but when it comes to actually using them for music and games, I was very disappointed. At the price point, there are very few true wireless earbuds with ANC; that is no excuse for the primary purpose of the earbuds to fail at. The bass was non-existent at lower volumes, and when the volume reached about 75%, there was noticeable crackling. If I placed the EQ on rock, the crackling started at lower volumes, hence why I kept the EQ on normal for the duration of the testing. The highs had a tin can sound to them, and the mids were flat. All that beautiful tech jammed into the PaMu Z1’s just to make a spreadsheet look good. I would have preferred ANC removed, but then again, if they removed ANC, the earbuds would not be able to compete against lower-cost true wireless earbuds with better sound quality. Companies like Skullcandy, JLab, Sony, Anker, SoundPeat, and Earfun all have better sounding true wireless earbuds under $50 without ANC.

PaMu Z1’s are beautiful to look at, feel great in your ears, have a ton of features, but lack a reason to use them for what they are intended for. I wanted to love the PaMu Z1’s. I was hoping they would sound as great as they looked, but I knew looking at the competition with the same features at higher prices that something would be wrong with the earbuds. Sadly, instead of a poorly executed feature like ANC, touch controls, or even the app, Padmate chose to skimp on sound quality. These would be great earbuds for people that only use true wireless earbuds for making phone calls. The quality of the mic during phone calls was adequate and did filter out some background noise. Again, the mic quality was nothing spectacular and on par with other true wireless earbuds at the same price or $20 less. Maybe the next version of Padmate PaMu Z1’s will work on sound quality, not just checking off a box on the features spreadsheet.