One interesting thing to come out of the last 18 months is that the world has become much more dependent on remote access for work and school. As a result, we’ve seen a shift in how technology is used to meet those daily needs. Our basic laptop webcams and five-year-old 480p USB 2 cameras just aren’t holding up to the demands of the modern work environment.

OBSBOT has developed a solution to address those needs and it comes in the form of a new AI-powered webcam aptly named Tiny. This uniquely designed camera rests on a two-axis gimbal and looks different than anything that has come before it. With built-in gesture control and automatic follow/focus controls the OBSBOT Tiny is designed with presenters, teachers, and active users in mind.

In theory, the Tiny is the perfect solution for the virtual classroom, boardroom, or even content creator that needs more space to move and present. How well does it do all that it promises? Grab that coffee, kick back and check out our review of the Tiny webcam from OBSBOT. 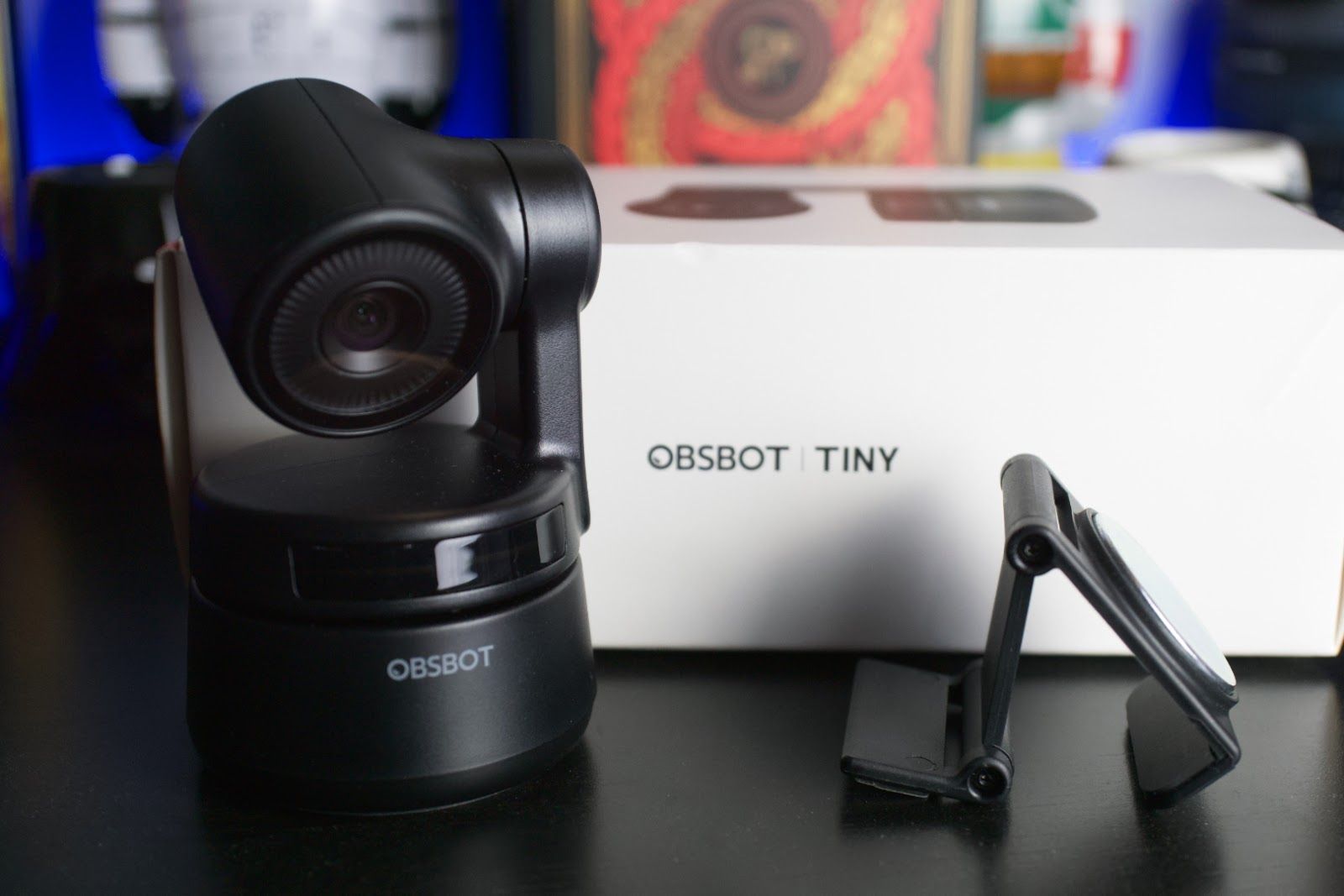 The Tiny is one of the most unique-looking webcams I’ve ever worked with. Gone are the traditional rectangle bricks that sit precariously atop your monitor. The Tiny is built from the ground up to be rugged, functional, and sleek looking. The camera itself is attached to a two Axis gimbal. The gimbal includes a standard 1/4 /20 thread mount for tripod mounting which is typical on most modern webcams. Additionally,  it also supports a magnetic base plate allowing it to clip to the provided mounting bracket without the need to thread a screw. This allows for quick setup and pack-up as needed.

The kit is rugged with a matte black finish across all surfaces. A small OBSBOT logo is branded to the front of the camera just below a three LED light strip that acts as an indicator of the camera’s current state. Around the LED strip is a small sensor system that acts as the AI’s guide for tracking and gesture recognition. It’s a solid piece of tech and feels sturdy to use.

Thankfully, the whole unit is powered by an included USB-C cable as well as an optional DC power port (no cable included). This DC port is presumably used to power the unit in situations where conversion of the USB-C to something that doesn’t provide power through the same feed. It’s a nice feature that you don’t typically see on a webcam.

Function as well as Form

The OBSBOT Tiny doesn’t just set new standards in design. This tiny camera is packed with some pretty impressive features. The first and arguably best feature to be included is the two-axis gimbal system with built-in AI tracking. Boasting a plug-and-play readiness, the Tiny works out of the box without any additional software. It was recognized immediately on both my PC and M1 Mac. 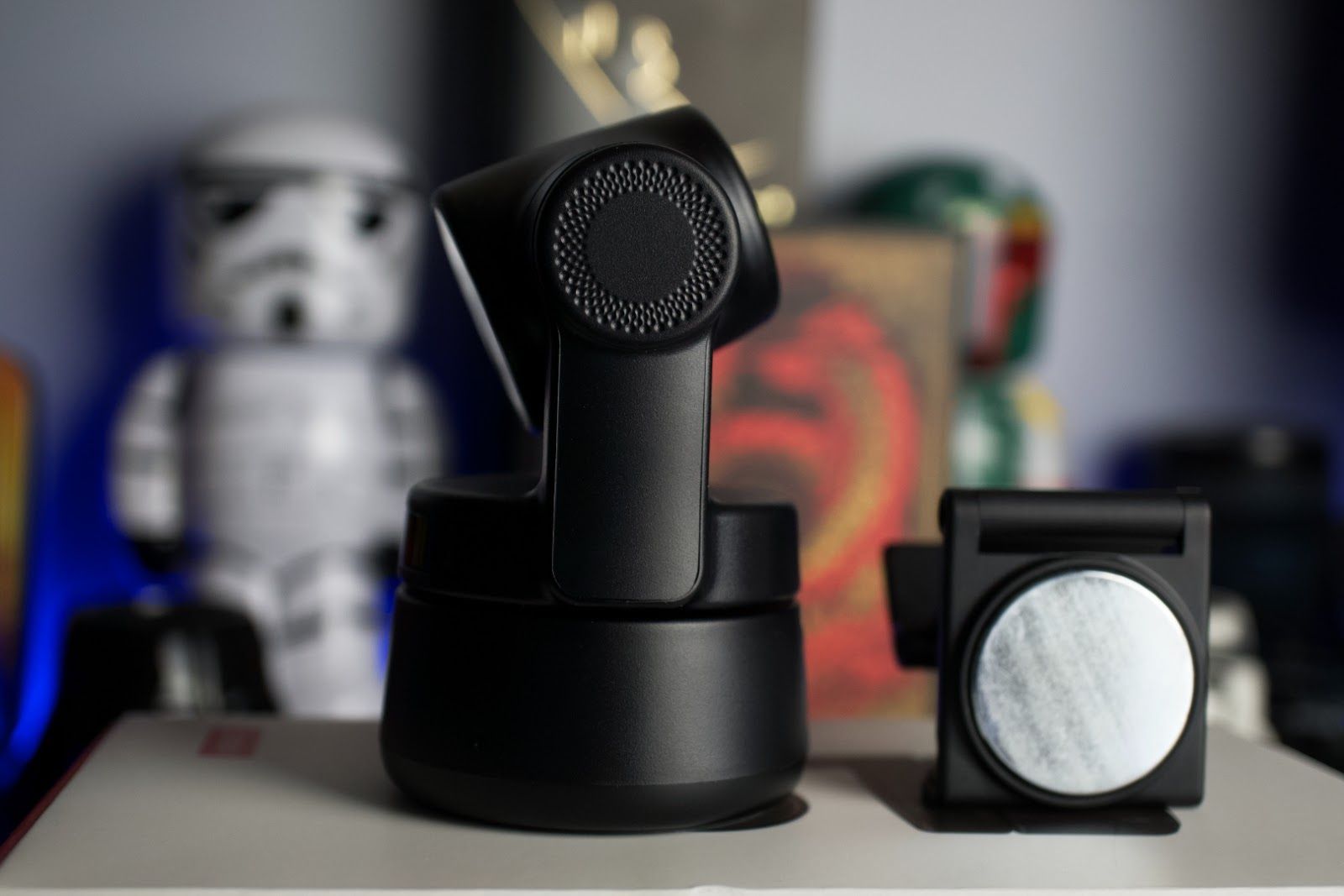 The Tiny performed like a champ on both my  PC and Mac in most of the tests. I’ll go into more detail below but suffice it to say that you can be up and running in under five minutes on your PC or Mac. The basic camera functionality works perfectly out of the box.

The software, which is downloadable for free from OBSBOT’s website, offers a host of additional setting options to allow you to tweak all of the Tiny’s little features and functions. Everything from custom camera settings to control of gesture functionality, AI tracking, and even manual gimbal control can all be found here. It’s a powerful little software package that offers more control over what the Tiny is capable of. 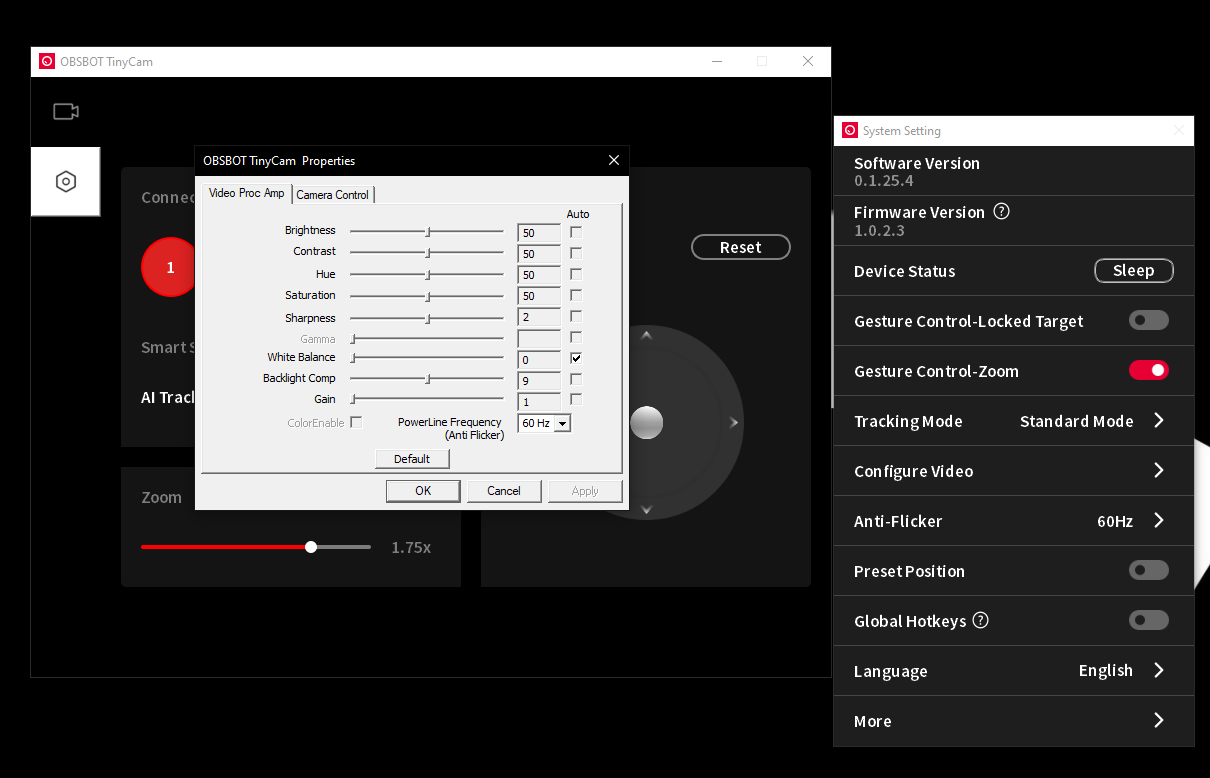 The gimbal system is powered by an onboard AI sensor that can actively track a subject on the move. It’s a slick piece of tech and is quite handy when you’re presenting or filming as a one-person team.

In my tests (There is a quick highlight reel below), I found that the subject tracking was excellent. Once I locked on to a subject to follow the camera was quick to track. Each adjustment always centered back on the subject and did a great job maintaining focus. Even while the gimbal was adjusting the camera remained focused with smooth, consistent movement. I didn’t note any stuttering or shaking of the image while the gimbal was in motion. This was pretty impressive considering that the camera was perched on top of my monitor.

Along with the included gimbal and AI tracking is a basic gesture control system. There are two preset gestures that can be used with the Tiny. An open hand gesture notifies the camera that it should lock onto the subject nearest the hand (or unlock if it’s already in the lock position). Raising your index finger and sticking your thumb out to form an L shape indicates to the camera that it should zoom in or out respectively. Again for those who present, teach or film it’s handy to not have to move back to the controls every time you want to move or zoom.

In practice, however, it was a bit hit and miss with the gesture controls. I found that the zoom gesture wasn’t always registered by the sensor and worst still despite my best efforts, I could never zoom back out after zooming in. The lock-on gesture faired a bit better with it being able to recognize the subject I was indicating a bit more frequently. Overall though I found the gesturing system to be a bit finicky and unreliable. It’s a great concept but still feels like it needs a bit more polish.

The Tiny also comes equipped with onboard auto white balancing and exposure tech. The sensor works to quickly adjust to various lighting conditions so as to always present the clearest image possible.

In practice, the Tiny performed fairly well with it only taking a couple of seconds to adjust to the different lighting conditions I threw at it. I did note that it struggled a couple of times with the auto exposure often overexposing the image leaving me a bit washed out in some cases. These cases typically included a fully powered ring light or a low light setting (more on that later). In well-lit settings, however, the camera performed much better.

I did run several tests in various lighting conditions as seen above. One of the things I noted is that while the Tiny performs well in a properly lit space it does struggle as you get into lower lit settings. When it came to filming this translated into some pretty blown-out or grainy images.

This is expected with a standard webcam as they don’t have the sensor to handle the lower light settings. However, when I compare the Tiny to a similarly prices Webcam like the Kiyo Pro (check out our review on it here)  this sensor’s weakness begins to shine through.

The shots below were taken at relatively the same height, exact same lighting, and only a slight difference in the field of view(it was a bit wider for the Tiny). The Kiyo Pro on the left does a fairly good job representing the correct colors and lighting in the room despite a bit of grain from the sensor trying to grab every piece of light it can.

Contrasting it with the Tiny on the right you can see that the auto exposure is overcompensating for the low light environment and essentially blowing out the image. It creates a haze effect on the image and also takes away from any kind of lighting effects you are trying to create in the space.  As a higher-end webcam, I had hoped the Tiny’s sensor would be able to handle some of those lower light settings better. 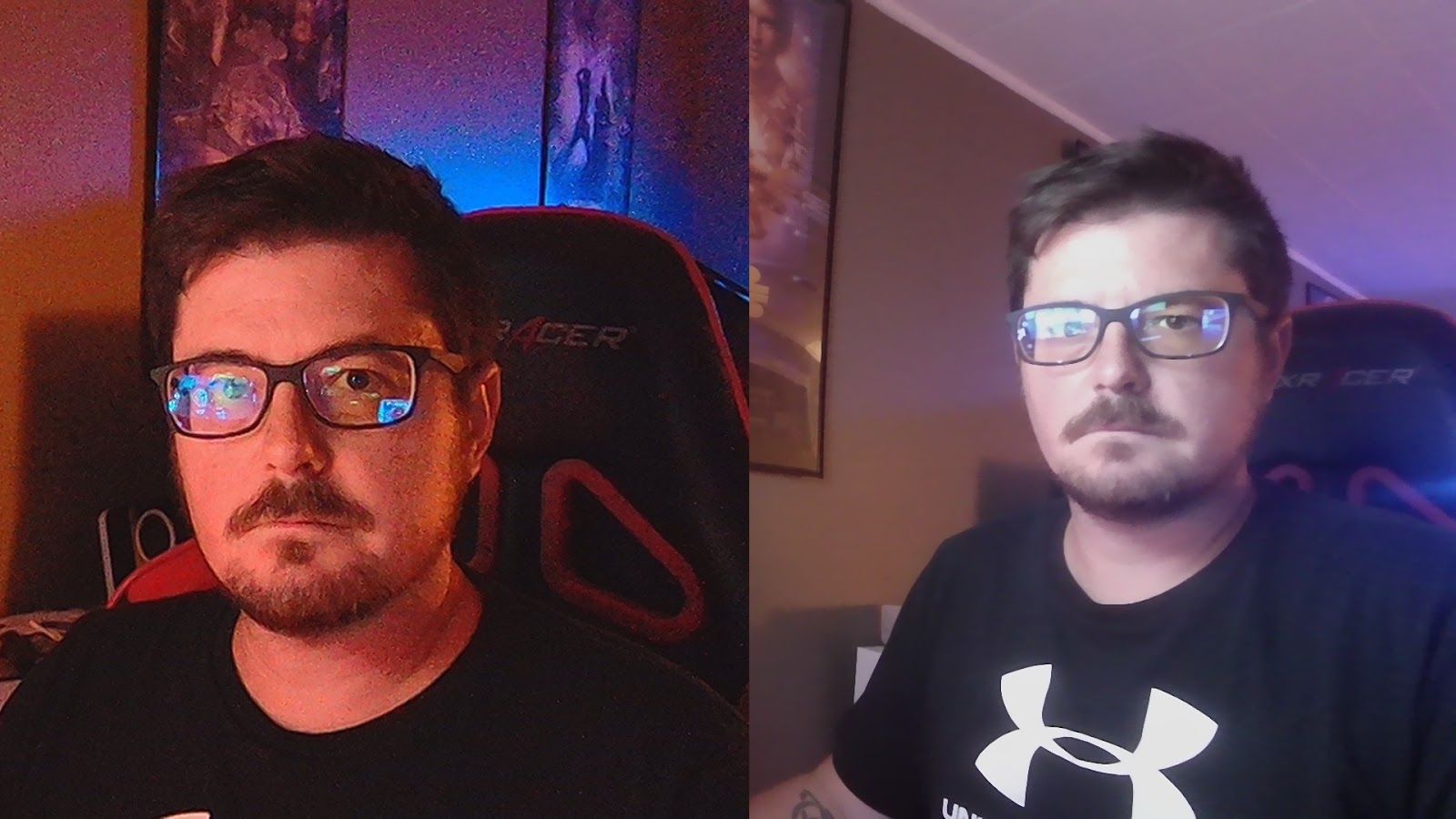 Honestly though, for an onboard webcam mic, I was impressed with the overall quality of the audio recorded. Interestingly it had no problem picking up my vocals even from across the room while still maintaining noise cancellation. Even with the distance, my voice was clear in the recordings.

If you’ve worked with webcams at all this is worth noting as most mics on webcams are terrible. The Tiny, by contrast, could be used in a presentation setting. This is one of those considerations that OBSBOT factored in when designing the Tiny. Its versatility and functionality are one of its biggest strengths. 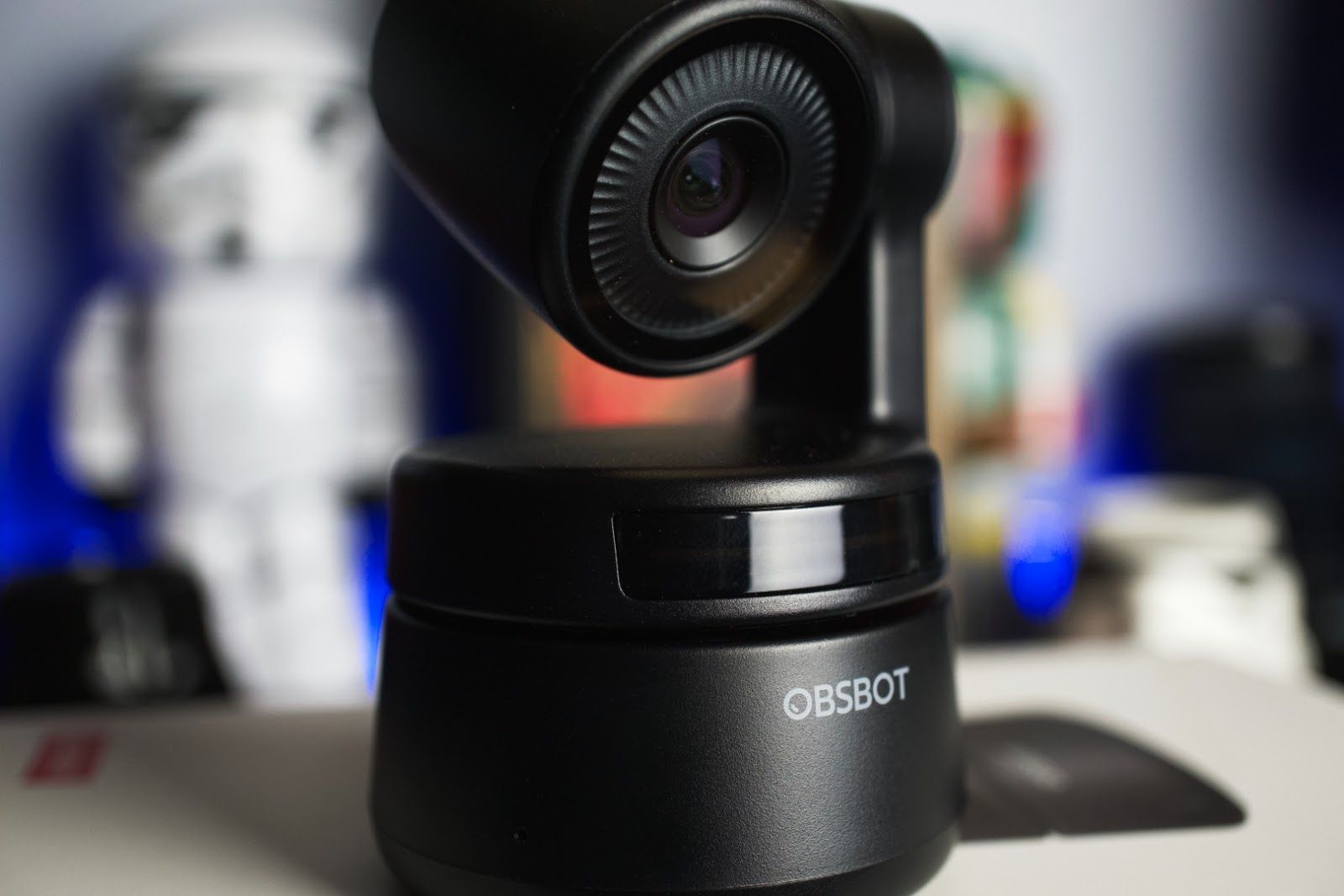 The OBSBOT Tiny is a pretty impressive webcam. In a world where video conferencing has moved from something we did on rare occasions to becoming the standard for communication, The Tiny offers a host of features to meet that new demand.

Between its quick plug-and-play design, AI tracking, and built-in mics, this camera is ready to handle pretty much anything you can throw its way. While not all the features are as great in practice as they are on paper, the overall functionality of the Tiny is worth consideration.

Its weak sensor does hold it back from beating out some of the other cameras in its price range but its overall functionality helps compensate for that which it lacks. Priced at 199.99 on the official OBSBOT site, the OBSBOT Tiny is a great stride in setting new standards for webcam design.

The product described in this article was provided by the manufacturer for evaluation purposes.
8.0Great
Pros
Cons
Tags
webcams
OBSBOT