In the past few months, we have seen some girthy gear released into the wild. With the ever-increasing size of components, PC enthusiasts and DIY builders have had to make yet another consideration in their quest to upgrade parts: will they fit in my existing case? To take that question one step further, if the components fit, can the case’s cooling solutions handle that much heat in such a tight space?

Not to be one without an answer, NZXT has released a new size tier to their H-series redesign: the H9 Flow and H9 Elite. These option-laden colossi have space for days, but will they fit every need? We’re about to find out!

If you have been following their releases over the past year, NZXT has been vying for more and more real estate on your desktop. From monitors to mics, mice, and motherboards, this has been the year of the NZXT desktop takeover – but that’s an article for another time!

In the midst of all of these releases, NZXT has been in the process of redesigning its H-series case line-up. While the redesign hasn’t been a huge departure from their iconically minimalistic design, we have noticed that the footprint of cases has seen an overall increase. Some of the changes in design have been to answer critiques about airflow. NZXT has been listening as well as providing better overall airflow in the H-series – including in some really creative ways. It is within this line-up redesign that we find the H9.

While it is still classified as a mid-tower case, the H9 is significantly wider than the H7 thanks to its dual chamber design. This design allows the main components to be the star of the show while the extra space in the rear encourages clean cable management. Within this extra space, the H9 also has a mounting wall for up to four SSDs as well as a vertical power supply mount that shares a wall with the motherboard tray. This extra space opens up valuable real estate on the case bottom for fans. 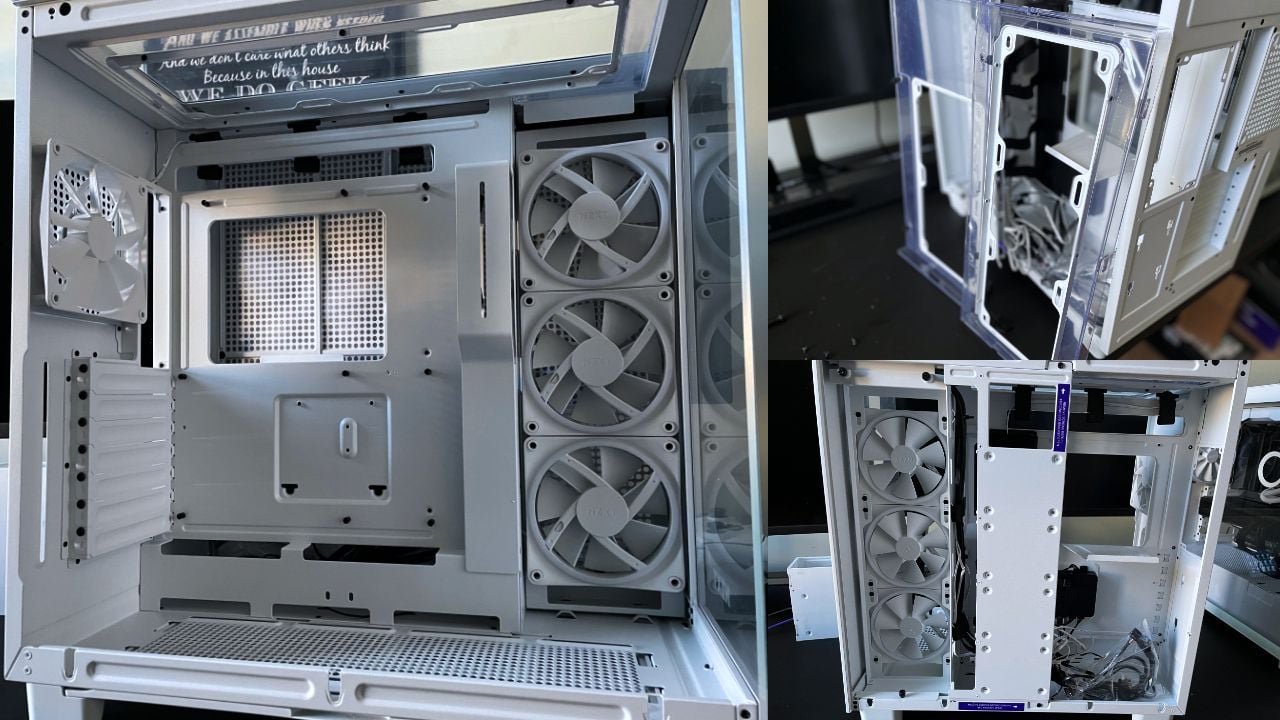 Speaking of room for fans, the H9 has no shortage of fan mounting options. At the bottom of the H9, there is space for up to three 120mm, two 140mm fans, or an equally sized radiator. At the top of the case, the H9 Elite uses a transparent mounting bracket tray for fan installation. The case does come with two of these trays, one supports up to three 120mm, and the other supports up to two 140mm fans – we’ll talk a bit more about this under our build section.  At the rear, there is only space for one 120mm fan, much like the H5. Both H9 Flow and H9 Elite cases come with NZXT’s F120Q fan installed here.

Moving on to the front side of the case, the H9 has room for a 360mm radiator or three 120mm fans. This is where three of the H9’s included fans come mounted out of the box, oriented for intake. Since we received the H9 Elite for our review, these fans were NZXT’s F120RGB DUO fans with addressable RGB on both sides of the fan. The H9 Elite is also equipped with NZXT’s RGB and Fan Controller V2 module. 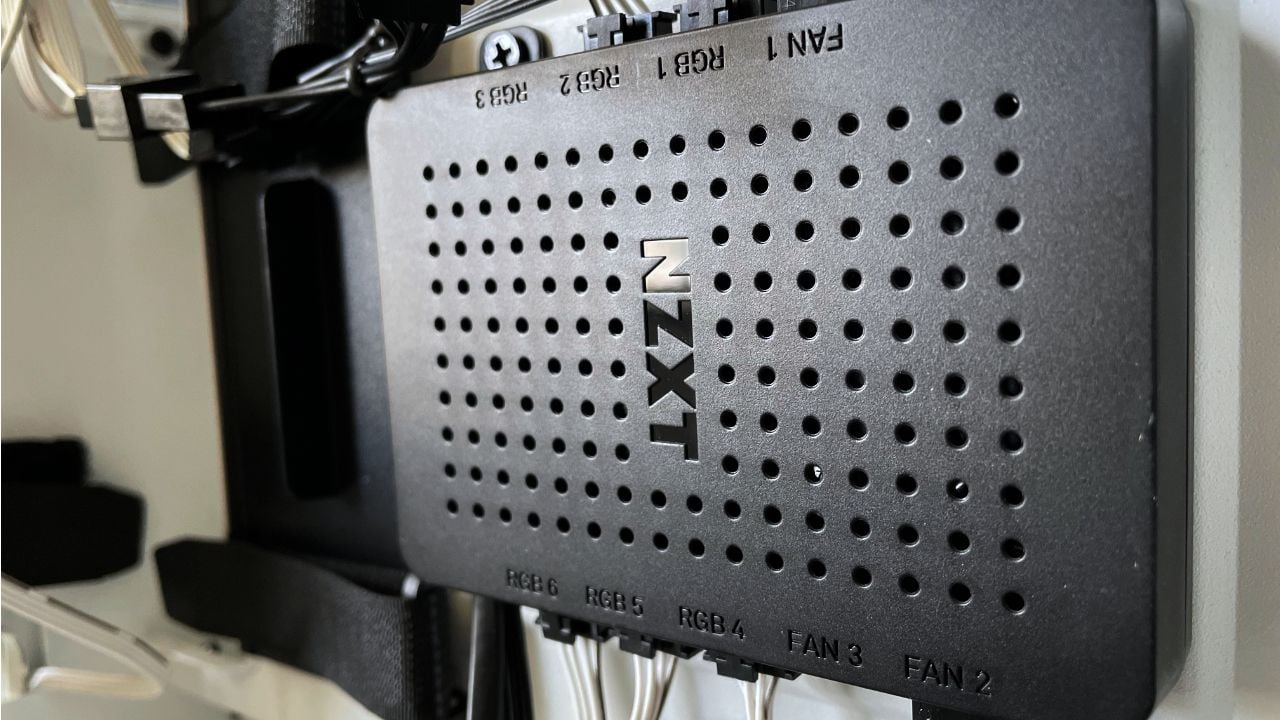 Since we’re at the front of the case, let’s talk about connectivity. The H9’s front panel I/O gives users access to two USB 3.2 Gen 1 Type-A connections, one USB 3.2 Gen 2 Type-C connection, and a headphone jack. The front I/O cables ship neatly strapped down into one of the H9’s cable trays, ready for easy connection once you install a motherboard.

Like the redesigned H-series, the H9’s PCI access has been designed to accommodate NZXT’s Vertical GPU Mounting Kit. This mount does not come with the H9 Elite, but if that is the aesthetic you are looking for, the mount does socket in nicely.

The H9 Elite is available for $239.99 USD in both Matte White or Matte Black finishes. Like the H5 and H7 series, tempered glass panels match the theme of the color you choose. Black cases will have tinted glass whereas white cases have transparent glass.

Building in the NZXT H9 ELITE

Over the years, we have built PCs in a number of different cases. For me, personally, many of my builds have been in NZXT cases – I have a particular type! The NZXT H9 Elite taught me a thing or two about options that I didn’t know that I wanted in a PC case… as well as a few things that I could do without.

Historically speaking, NZXT cases have had a toolless design to access the case. The H9 is a bit of a departure from that, but not in an overwhelming way. After all, any PC build you do is going to require tools! The tempered glass side and top panels can be removed without tools, but the front panel looks like it was screwed down, so we didn’t mess with removing it. Much like the rest of the H-series, the back panel was mounted by thumbscrews, but the SSD wall had two small screws that needed to be removed. This was a necessary step to access cables and cable ways. A nifty feature with this piece is that the area near the screws is magnetic, holding it in place in case you need to switch the case’s orientation.

With the radiator in place, we considered fan orientation for the top and bottom of the case. Since we had two 140mm fans and three 120mm fans to work with, we decided to put the 120mm fans at the bottom of the case, using the removable bracket for two 140mm fans at the top of the case. With a decision made, we mounted the fans to the top bracket, but decided to save its final installation until after slotting the motherboard in place. 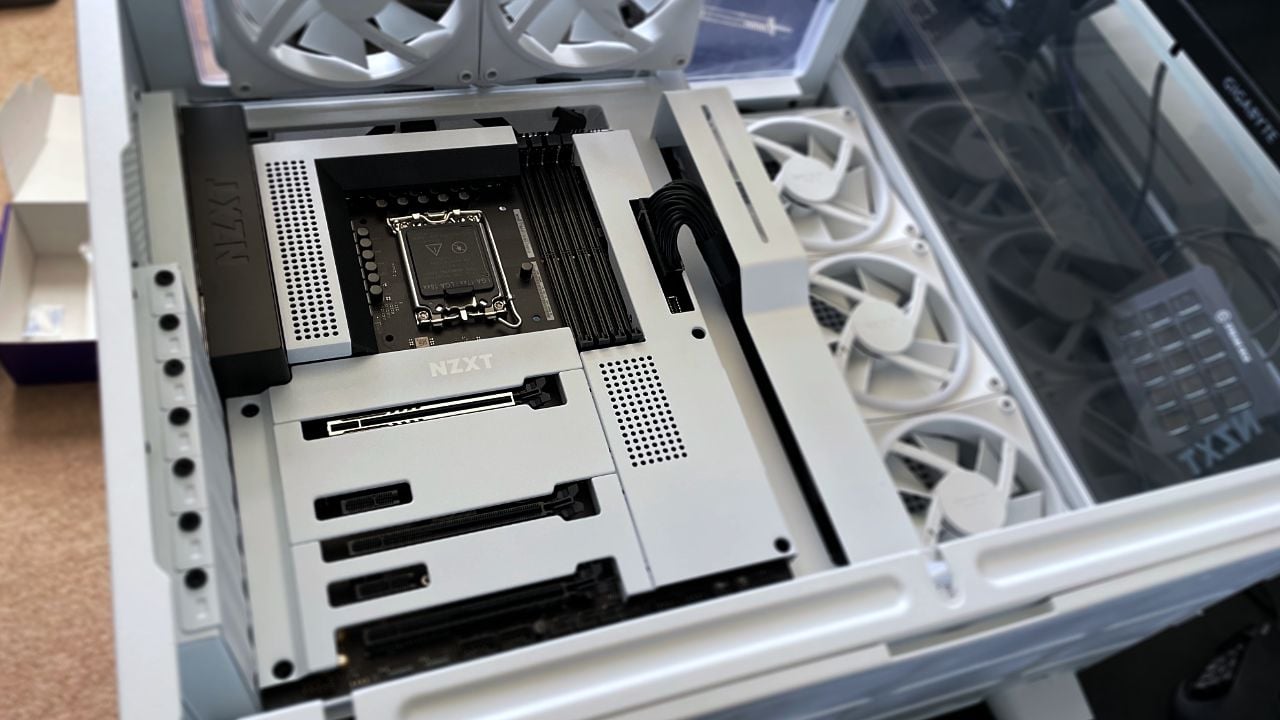 To give us the Elite Experience, NZXT sent us their N7 Z790 motherboard. No surprise to us, it looked simply stunning in the H9 Elite! Once that was in place, we started running the cables for the Kraken AiO and started to contemplate cable routing. And, the options were plentiful!

We did notice that the H9 used a variety of Velcro cable straps, including screwed down straps similar to those we saw in the H5 Elite. Personally, they aren’t my favorite things, but these straps did seem a bit heartier than the ones we saw in the H5. They are secure, but we are a bit concerned that these could be a failure point if the wrong amount of tension is put on the straps.

One of the benefits to having more space within the rear of the case is the extra options for cable routing. The H9 Elite hid two vertical tie-down channels behind the SSD mounting wall and a horizontal one running along the top of the case. This made routing fan, power, and RGB cabling pretty simple while keeping most of the clutter to a minimum.

Unfortunately, the lion’s share of cable clutter came from having the PSU mounted in the middle of the cavity. While the SSD wall and the channel directly behind it do provide some cover, routing power was visually messier than we would like it to be. The positioning of the PSU also inhibited routing for some of my fan wiring. It wasn’t too awkward, but we had to get creative. What was awkward, however, was discovering that we forgot to install the CPU mounting bracket for the Kraken before we started routing cables to the PSU. Because of where it sits, we had to remove the PSU entirely. Fortunately, NZXT’s C-Series PSUs are modular power supplies, so it didn’t take too long!

Once everything else was in place, we reinstalled the top fan bracket. And, I have to gush about this bracket for a moment. At first, I didn’t think much of it; a number of cases have removable brackets, but I’ve never built in a PC case with one. Having larger hands, I don’t know that I ever want to be without this option in the future! Open access to the CPU cable plugs was a dream come true! I didn’t know what I was missing before this moment.

After installing the bracket, we began to organize RGB and fan cables, running them back to the NZXT Fan and RGB Controller V2. It was a welcome sight to see this module return to the H-series Elite cases after it was missing from the H5 Elite. The H9 Elite took things one step further and included a few fan splitter cables with the module – an addition that we have been begging for!

Where we had to get a bit more creative though was with the fan RGB connections. While the included module (when partnered with cable splitters) is sufficient for the fans, it did not have enough connections to support all of the RGB connections by itself. Fortunately, NZXT does include RGB controller modules with fan multipacks and the Kraken offers support for its radiator fans as well. Even with these extra devices, we needed to install an internal USB hub.

Once cables were managed and everything was in place, we installed the GPU, utilizing NZXT’s PCIe 4.0 Vertical GPU Mounting Kit. With such a beautiful build, we decided to use an equally beautiful GPU, NVIDIA’s GeForce RTX 3090 Founder’s Edition. Sure, it’s no RTX 4090, but it’s a gorgeous and powerful GPU worthy of a showcase build like the H9 Elite provides. 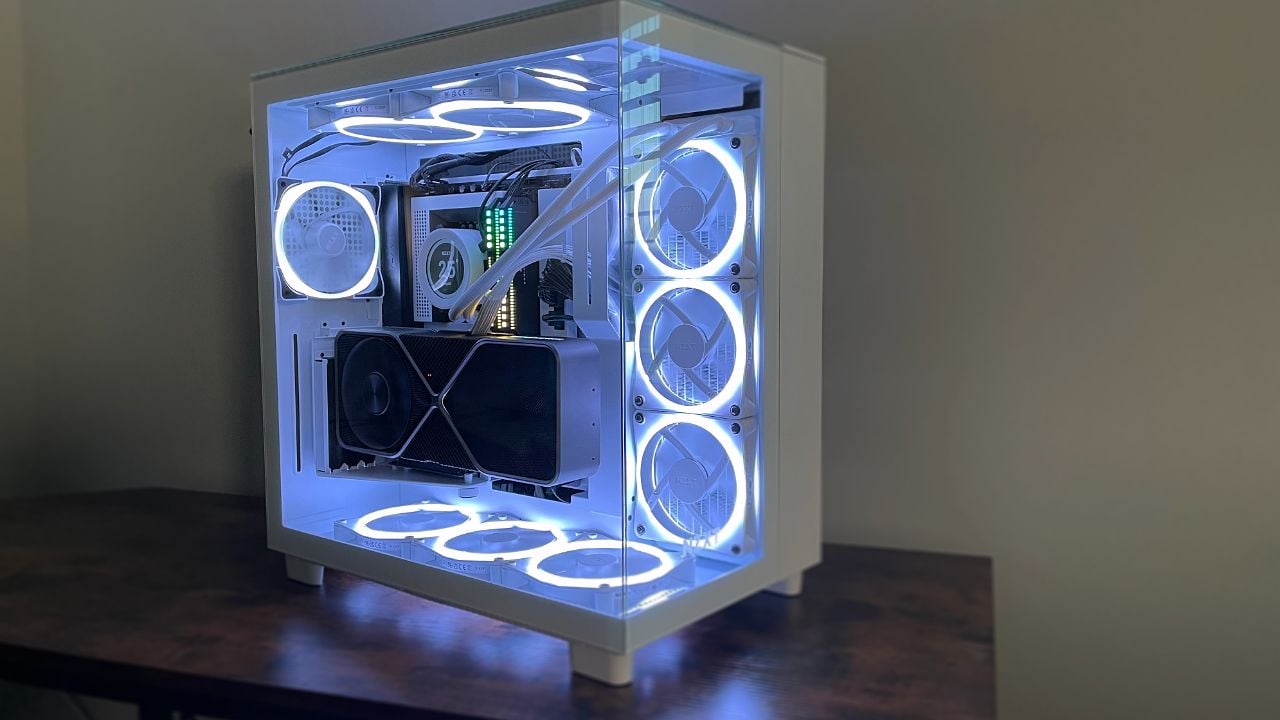 Since the H9 series cases are such boutique cases, we wanted to install some high-end AMD X670E and Intel Z790 motherboards to see how they would look in the H9 Elite. Unfortunately, these components are creeping into larger form factors and the H9 is better suited for ATX or smaller motherboards. Larger motherboards can be made to fit, but it would require the removal of parts like the cableway shroud, specialty cabling, or modifying the case itself. This felt like a missed opportunity as it restricts builders from utilizing components that would really benefit from such a beautiful case like the H9. I haven’t given up on options just yet, but it was a bit disheartening.

Beyond that, there is a lot to love about NZXT’s H9 Elite. Its wide open design, versatility in fan mounting options, and airways make this case airflow friendly. While a dual-chamber case is a new design for NZXT, the brand’s iconic design philosophy is evident throughout the build. From its uninterrupted tempered glass panels and removable transparent top plate to the wide-open component cavity, the H9 is ready for super clean, show-stopping builds.

Coming in at $159.99 USD for the H9 Flow and $239.99 USD for the H9 Elite, NZXT offers a premium case at a premium price. But, if you like the aesthetic and you are looking at building the ultimate NZXT-themed PC, the H9 and H9 Elite are a new zenith for the company, updating the blueprints for what a matching monochromatic, monolithic build can be.