NZXT is well known for its PC cases and accessories, and I doubt there is another case on the market that is more recognizable than their compact mid-tower H510 series. A favorite of DIYers, more often than not you'll find the minimalist look of the H510 a stark contrast to the RGB lighting, all-in-one coolers, and possibly even custom water loops that enthusiasts have crammed into the smallish case.

Regardless of whether you trick out the innards of your case with all that extra bling or stick to a more stock configuration, the sleek look of the H-Series has always come at a cost: airflow. With the H510 Flow, NZXT aims to fix that. Using the H510 Elite as a starting point, NZXT has removed the small side vents and replaced the TG front panel of the H510 Elite with an open-air panel. A few degrees one way or the other can determine whether a PC case thermals are good or bad, so let’s dig in and see which side of the fence the NZXT H510 Flow falls on. 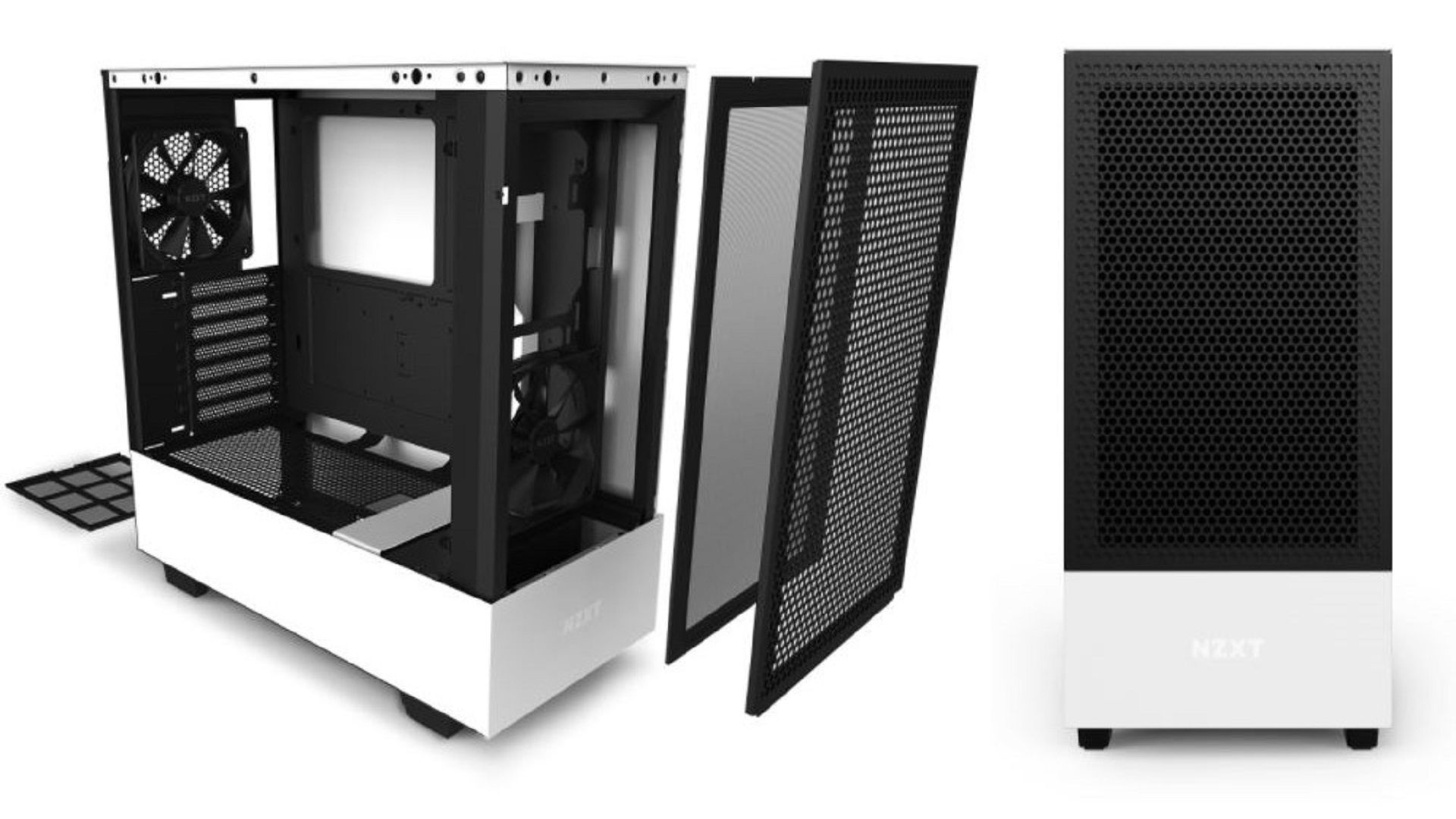 Inside and out, everything about the H510 Flow says it's the same H-Series case you've seen a million times. We’ve already reviewed the H510 Elite, and the Flow shares much of the DNA of the H-Series flagship. That isn't a bad thing, per se. The old adage, if it ain't broke, don't fix it comes to mind. Instead of going through and rehashing what has already been said (Damien’s review of the H510 Elite mirrors my thoughts about the H510 Flow almost to a fault), today we’ll be looking only at the changes NZXT has made to increase the airflow for the H510 Flow.

Before we get into the big-ticket item on display here - the new perforated front panel - let’s cover the rest of the changes between the H510 Elite and the Flow. Most notably, some of the extras that contributed to the H510 Elite’s original $169 price tag (currently $149.99 on Amazon) have been removed to get down to the Flow’s $109.99 MSRP. The 140mm RGB fans have been swapped out for more modest non-RGB Aer F 120mm fans. Another big loss is the removal of the Smart Device 2 and LED strips. RGB isn’t for everyone, so many people won’t mind this downgrade.

So what about that new front panel? At first glance, you might not even notice the difference. NZXT has always kept the H-Series boxy and minimalist, and the H510 Flow stays true to form. Other than the front panel itself, the only cosmetic change is the removal of the now unnecessary side vents. Unlike other cases that open up airflow by adding hundreds (thousands?) of small holes to the front plate, NZXT has gone with bigger holes similar to what you'd see for rear panel fans. Those small holes always act like dust magnets, so the bigger holes on the NZXT panel should be much easier to clean. And although the holes are bigger than other panels, there is still a fine mesh screen to help catch small particles.

I wouldn't exactly call it an aggressive look, but the larger grid does give the impression that you will be getting the maximum amount of airflow while still protecting the front of your case from large objects. The larger holes also allow you to see any RGB fans you install into the front of the case, giving you a similar appearance to that of the tempered glass on the H510 Elite. 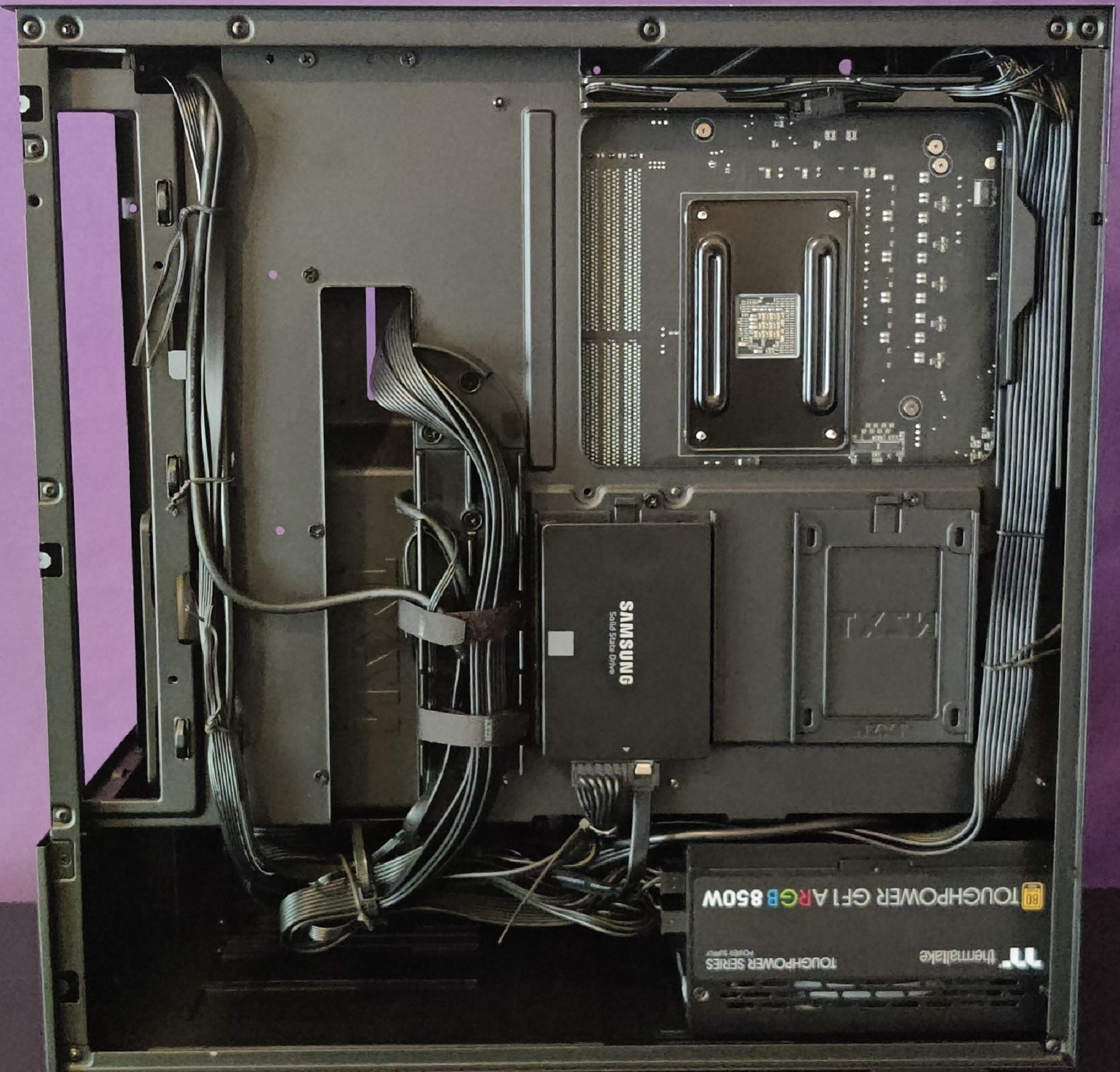 For removal, the new panel sticks to the toolless design of the H-Series. There’s a small grove in the case to hold the bottom of the panel, and a ball and socket design secure the top of the panel in place. One of the balls didn't seat tightly into its socket on this case, allowing for a small amount of wiggle. The panel was still secure enough that it wouldn't fall out, but without any foam or rubber gaskets between the two metal parts, I was initially concerned about the possibility of any vibrations creating extra noise. Fortunately, even with two front fans installed and running at 100% speed, I didn’t hear any vibration.

Companies often set near-perfect conditions for their tests, with some of the beefiest fans and coolers money can buy. NZXT published some test results against an H510 Elite using an Intel Core i7 11900k with a Kraken Z63 - 280mm AIO and a Zotac RTX 3080 Amp Holo. Their test showed a 4.7C decrease in max temps, and an 8C decrease for average temps for the CPU, with a negligible 1C change for the GPU. That’s a pretty decent improvement, especially if you can recreate it outside of the lab.

I want to preface this next section by saying that I am not a professional PC tester. My work area is not a perfectly controlled environment, and unaccounted-for variables will most certainly creep into my results due to my testing practices, the quality of tools used, and imperfections in the human doing the testing. If you require the most accurate tests possible, I suggest you check out Gamers Nexus. This is how they make their living and their results will be far more accurate than mine.

That said, what you will get here is some real-world testing. I didn’t have another H510 variant on hand to compare to the Flow, but my existing case is a Fractal Design Meshify C. It’s not a chart-topper by any means, but it can hold its own in the sub-$100 price range. Before tearing my system down to place into the H510 Flow, I ran the Meshify C through its paces to see if this case would be an upgrade.

The test system is a hodgepodge of parts capable of generating enough heat to fry an egg:

Testing was done in a typical gaming environment: on a desk in the corner of a room. The setup area isn’t completely open with the case sitting about 8 inches away from the walls, but it does provide enough space for the exhaust air to freely escape from the case. To test GPU temperatures, the 3DMark Time Spy Stress Test was used. Temperatures were recorded on the last loop of the test, with the average temperature used as the result. 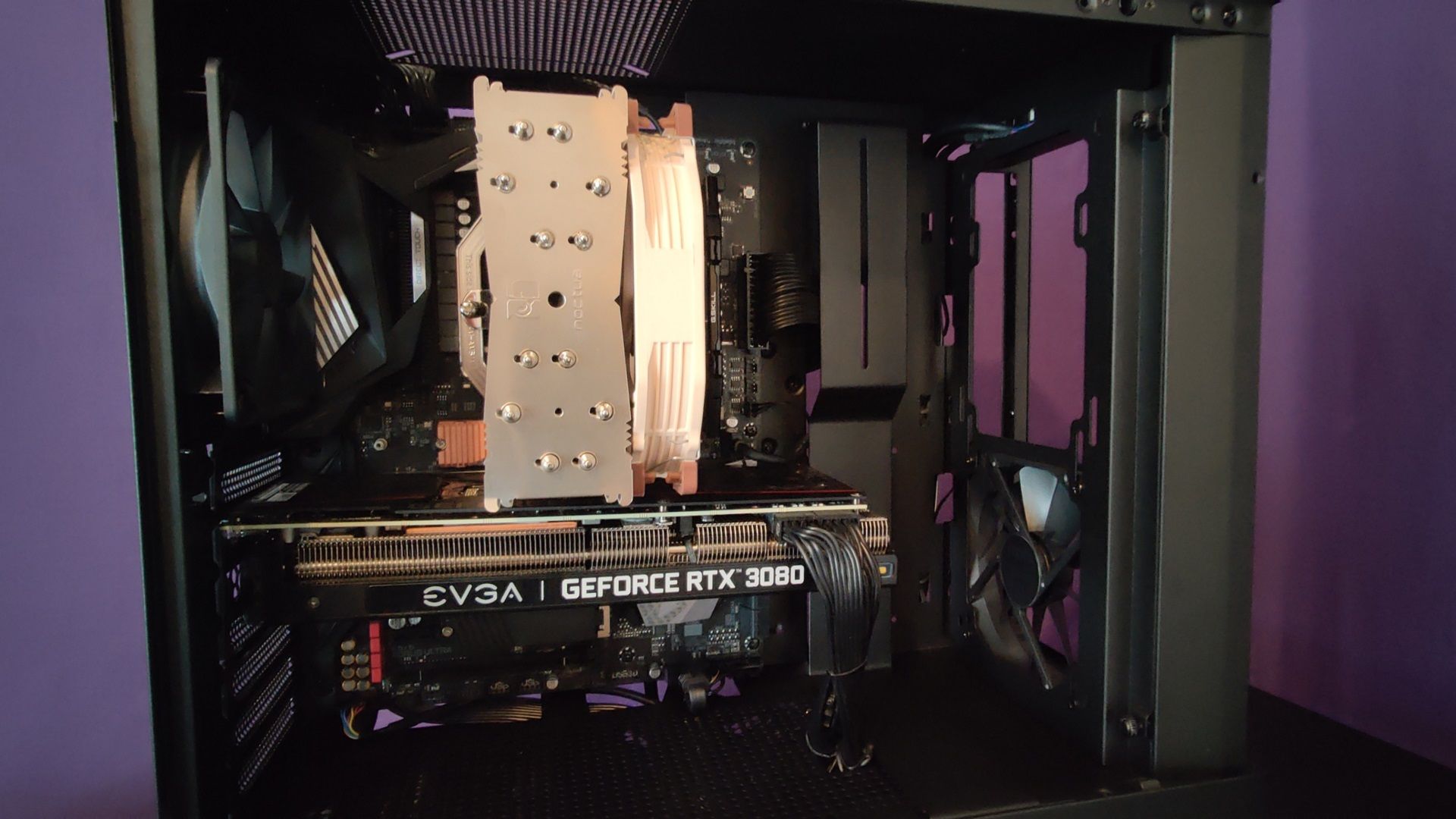 On the CPU side, we used Cinebench R23. This time the CPU temperature was monitored during the final loop of the benchmark, with the average temperature used as the final result.

Multiple fan setups were tested for both systems. To start, each case was tested with its out-of-the-box fans in its default configuration. Both cases come with one front and one rear 120mm fan capable of 1200RPM. The only discernable difference is the NZXT case has the front fan in the lower spot while the Meshify fan occupies the top location.

Since both cases come with plain old fans, they were swapped out with RGB fans to create a common Gamer Fan Setup - 2 front 120mm and 1 rear 120mm fan. The fans used are touchaqua Notos120 capable of 1800RPM. Yes, I know they are cheap but they still get the job done.

For the final setup, I filled every fan position I could. For the H510 Flow that meant adding a fourth fan to the spot located at the top rear of the case. The Meshify can hold six fans - 3 front, 1 rear, and 2 top-mounted. That may seem like an advantage, but the tests show otherwise. The RGB glow from all of those fans does look nice, but the benefits end there. In reality, all those extra spots are meant for radiators, and the extra fans by themselves are better at creating turbulence than they are at improving airflow.

Each of the three fan configurations was tested at two speeds. Just for funsies, each setup was tested with all fans set to 100% speed. It got pretty loud and isn’t practical for regular use. To achieve a more realistic noise level, the CPU fan and case fans were set to 1200RPM for the second run. To match the volume of the other fans, the GPU fans were set to 72%, which put them right at 2000RPM. 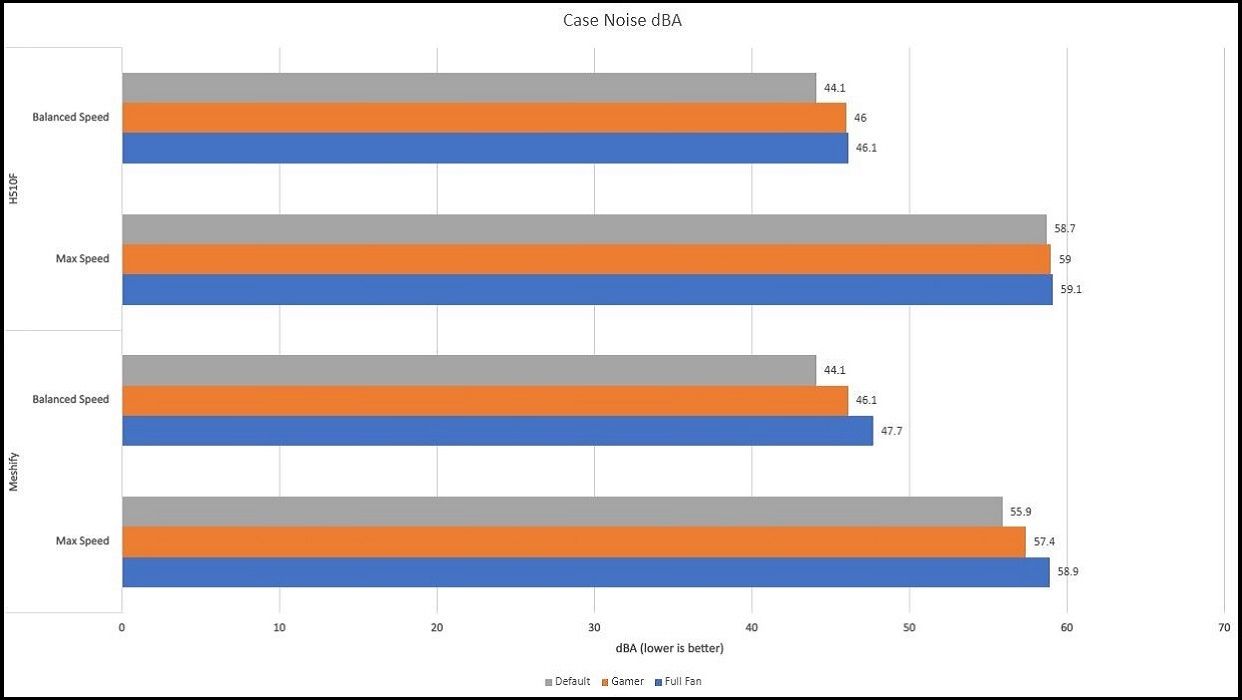 Idle temperatures are nearly identical for each case, with CPU temps between the two cases varying by less than 1 degree regardless of the fan configuration. For the H510 Flow, the reduction in idle temperature by changing from the default fans at a balanced setting to a full fan configuration at max speed was only 2C. That’s hardly worth the cost of the additional fans, not to mention the added noise.

There was a larger difference for the GPU, though. In the H510 Flow, the default fan configuration pushed the GPU 4C below the Meshify temperature. The H510 Flow has the front fan in the bottom slot in the default config while the Meshify has it up high, so it only makes sense the Flow would be feeding more air to the GPU. With more fans added in, things got a little closer. In the full fan, max speed test the H510 Flow was still able to keep the CPU 1.9C cooler. That’s still a pretty big win for the H510 Flow, and further testing would show this wasn’t a one-off result. 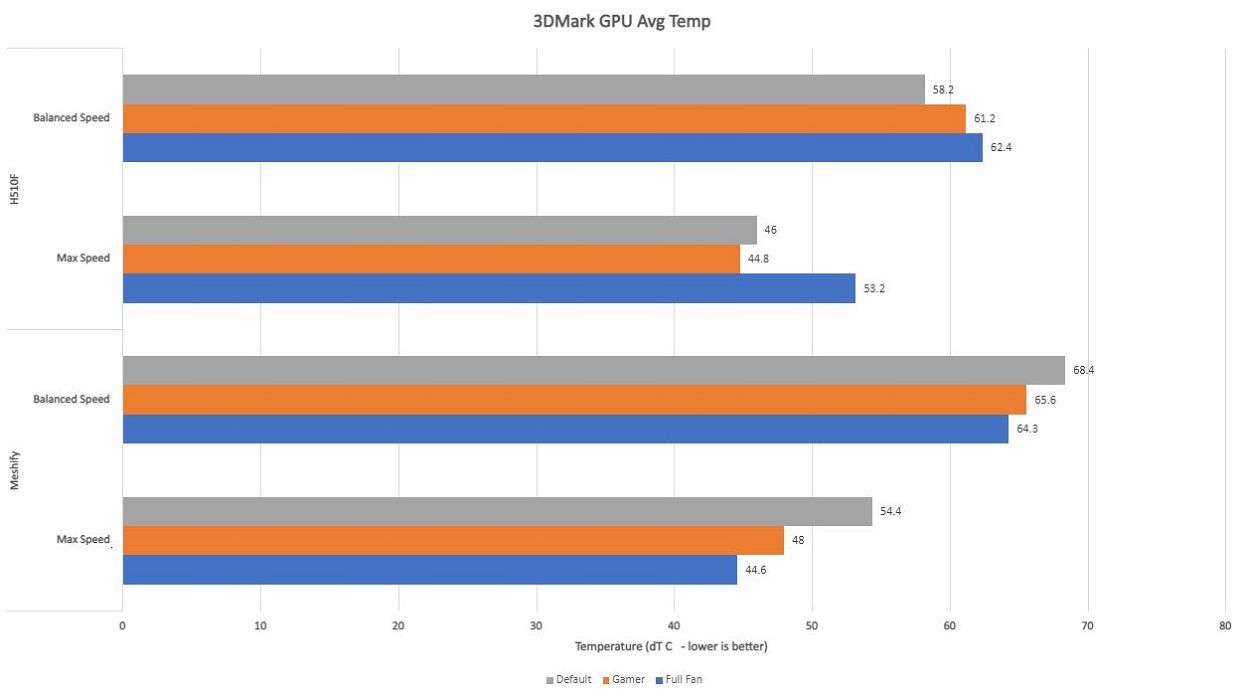 The H510 Flow beat the Meshify C in nearly every configuration. Before you ask, the H510 Flow Balanced tests are listed correctly. Thermals shot way up as fans were added, and I’m not sure why. I verified fan speeds and re-ran the test thinking that maybe I had set something up wrong, but the results were the same. I tried swapping out fans and even moved them to different headers on the motherboard. After running multiple tests, including running the max speed tests again to verify those were accurate, I have exhausted all hardware-related issues I could think of. 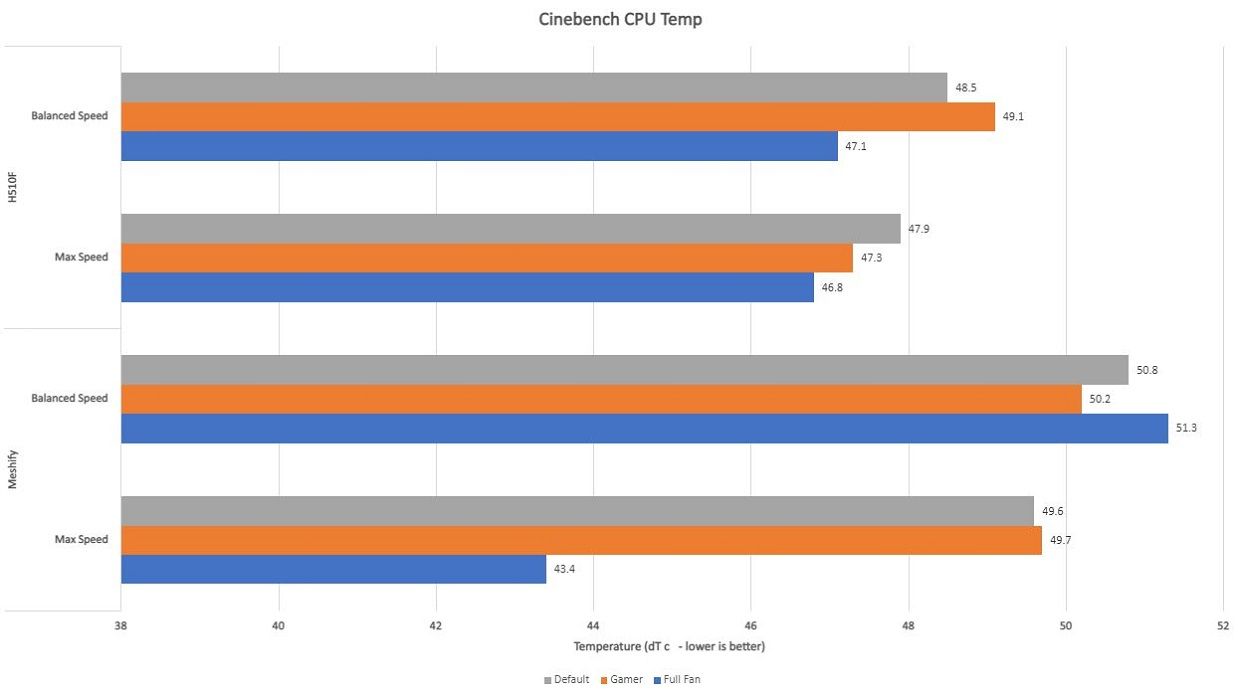 Once again the H510 Flow had a hiccup when more fans were added and set to a moderate speed. Even so, it was still able to beat the Meshify C in all configurations except the full fan at max speed, where the sheer number of fans in the Meshify reigned supreme.

Overall, the H510 Flow performed quite well. It was able to beat the Meshify C hands down in all of the noise and thermal tests. Visually, tt might just be that I've grown tired of the wonky front panel on the Meshify C, but the H510 Flow’s large holes are a nice change of pace. Finally, building a PC inside of the H510 Flow was a dream. I've built PCs using several cases over the years, but none of them have been this easy to work with. And no matter how hard I've tried in the past, my cabling has never been as clean as it was this time.

NZXT is always trying to tweak the H510 and the rest of the cases that came before it. While the H510i and Elite focused on adding RGB and making slight changes to the inside of the case, the H510 Flow is a definite upgrade for NZXT fans that wanted more airflow. The only weak point to this refresh is that the $109.99 price point is a little hard to swallow considering all of the competition and the sub 100 price range. But if you've got the cash and you like the iconic look of the H-Series cases, you can’t go wrong with the 510 Flow.

The H510 Flow discussed in this article was provided by NZXT for the purposes of review. All other items were previously purchased by the reviewer.
8.5Great
Pros
Cons
Tags
NZXT
Computer Cases
DIY PC
NZXT H510 Flow