NZXT PC cases have always had an iconic, minimalistic look. You know it when you see it – the clean lines, matte finishes, tempered glass panels – it’s a classy and classic look that carries a certain appeal. While a word like “classic” might denote a protection of or adherence to some archaic, bygone way, NZXT has been listening to feedback and evolving.

Just a few months ago, we got our hands on the NZXT H7 Elite – the next evolution in NZXT’s full sized, mid tower line up. This same spirit of adaptation has found its way into the company’s compact mid tower range with the H5 Flow and H5 Elite.

We got our hands on the H5 Elite to see just what NZXT has changed and how it upholds the NZXT design tradition.

Over the past few releases, NZXT has offered different versions of their cases to provide for the needs of the consumer. In the summer of 2019, we were introduced to a PC case that prioritized airflow: the H510 Flow. With its positive reception, this iteration carried into the new H5 line up. The classic flat-fronted chassis, however, did not make the cut.

Following in the footsteps of the H7 series, the H5 is a redesigned case that continues to provide those classic, NZXT clean lines we talked about in the introduction with a slightly increased footprint. The H5 chassis increased height, depth, and width by a few millimeters, allowing for more space in the case rear and support up to two top mounted 120mm fans instead of one.

Since we’re talking about fan mounting options, we have to talk about the addition of a diagonal fan at the bottom of the case. This new feature seeks to carry air from the bottom front of the PC case and push it up through the components, cooling from a different angle. NZXT’s commitment to prioritize thermal management doesn’t end there; the H5 series, like the H7 series, adds a perforated top panel and dust filter for better airflow. This is great news for those concerned about cooling! 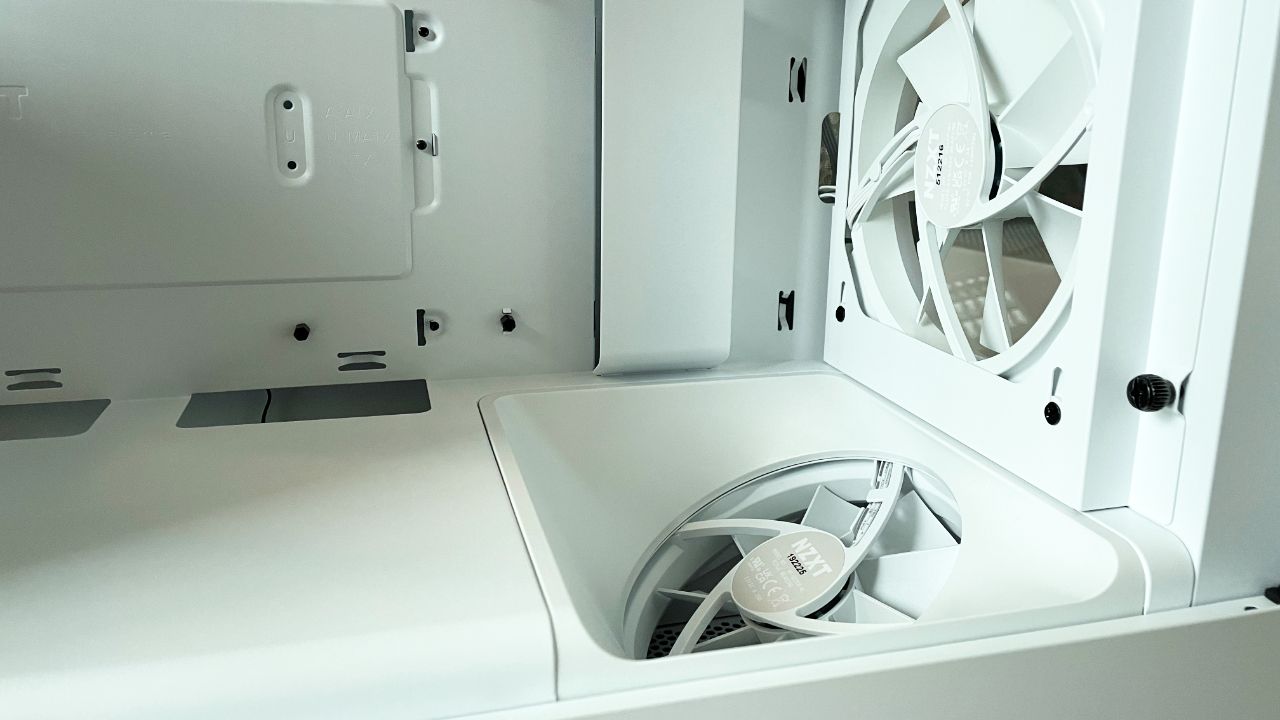 Speaking of mounting changes, the H5 Flow and H5 Elite change up the options for hard drive mounting. The two-bay bracket is now gone to make room for the bottom case fan mount. Drives can still be mounted vertically in the back of the case. When it comes to motherboard mounting, NZXT’s new H5 cases fit most average sized motherboards with the exception of EATX. We’ll talk more about this point a bit later.

The front I/O remains the same as the H510 line, giving users access to one USB 3.2 Gen 1 Type-A connection, one USB 3.2 Gen 2 Type-C connection, and a headphone jack. On the rear side of the case, the PCI access has been redesigned to accommodate NZXT’s Vertical GPU Mounting Kit.

Now, let’s talk about the Elite.

Much like the H7 Elite, the H5 Elite includes upgraded fans, tempered glass front panel, and an RGB controller module. The front panel fans are the same 140mm NZXT F-series RGB fans that were used in the H7 Elite and the rear mounted fan is NZXT’s F120Q (or Quiet Airflow) 120mm fan. The controller module, however, is quite different. Rather than serving as both fan and RGB controller, the module within the H5 Elite only controls three NZXT RGB-enabled devices. 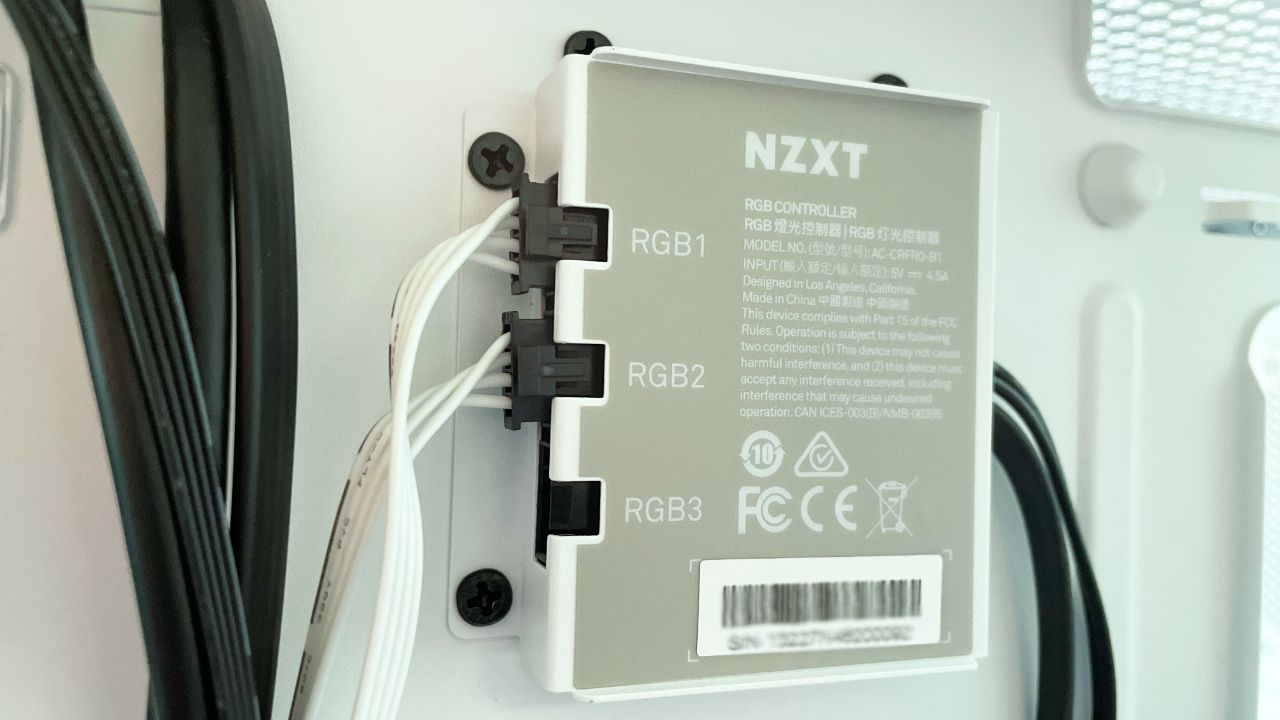 The H5 Elite is available for $139.99 USD in both Matte White or Matte Black finishes. Like the H7 series, tempered glass panels will match the theme of the color. Black cases will have tinted glass for darker builds whereas the white cases have transparent glass for lighter ones.

Building in the NZXT H5 ELITE

Every time I build an H5-series case, it feels like the Goldielocks of case sizes – not too big, not too small…“just-big-enough” for most modern builds, especially when you start adding the Elite features from the past. It’s one of the things I loved about NZXT’s H510 Elite!

As we talk about building, I am going to be sharing a thing or two about my experience as a person with larger hands, so your mileage may vary.

We began with removing the side panels and from tempered glass to open everything up and to take inventory of everything we were going to be working with. As with other NZXT cases, the tool-less access to the main compartments allow builders such as myself to dive immediately into the part we all love: building.

Since the NZXT’s Kraken Z63 has a 280mm radiator and the front mounted fans were already 140mm, I decided to use the installed F140 RGB fans along with it. The H5’s removable fan bracket made the process incredibly simple after untethering the fan and RGB wires from their neatly anchored positions in the back of the case. Unfortunately, with the top and rear mount fan positions only supporting 120mm fans, I had to leave those spots open for the time being.

With the CPU cooler awaiting its final seating and front fans secured to the radiator and bracket, I moved on to seating the motherboard. Much like its other cases, NZXT placed a stand-off post for centering the motherboard within the chassis. Every time I see this, I am reminded how these small touches make the experience so much easier.

With the Gigabyte X570S AERO G in place, I started to contemplate cable placement. Since I intended to use NZXT’s PCIe 4.0 Vertical GPU Mounting Kit with the H5 Elite, I would need to ensure that everything was in the right place before seating our GPU. And this is one place where I started to notice some significant changes to the inside of the H5, beginning with the center system cable guide. 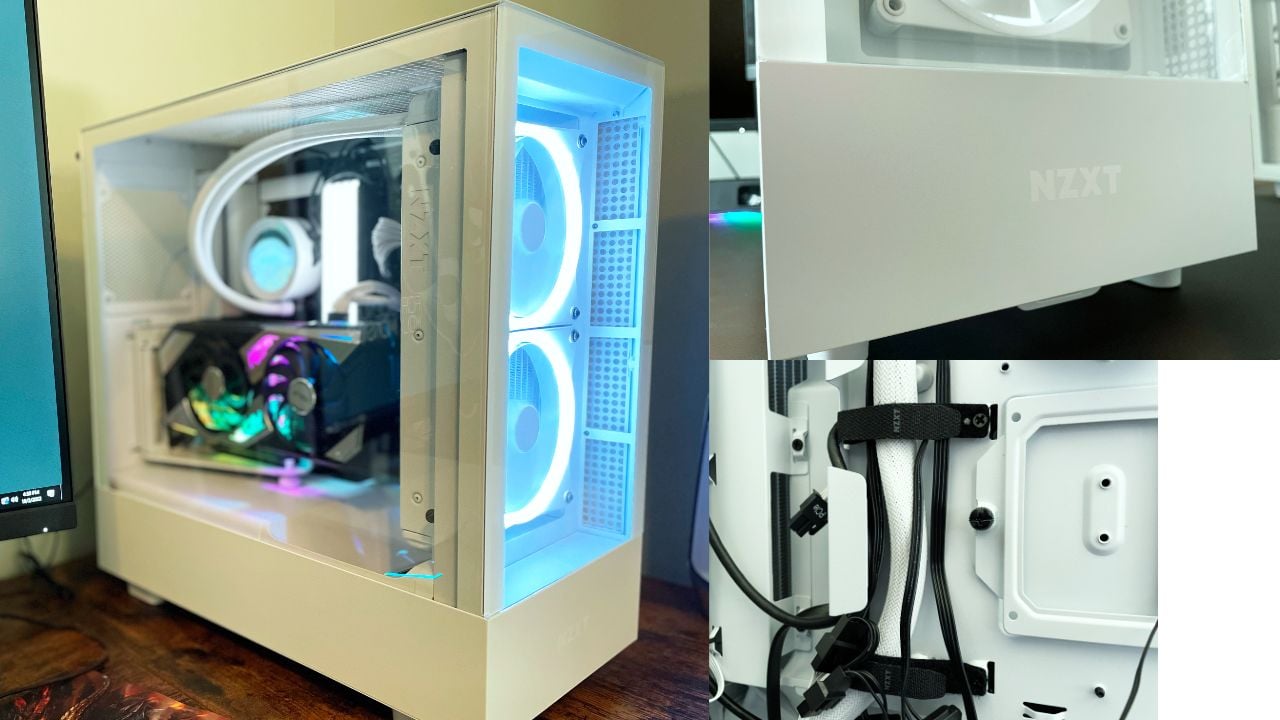 Unlike the previous H500 and H510 line-up, the cable retention tray that typically ran through the center of the case was removed in favor of a few wide lips within the case’s structure, paired with velcro tie-downs. While the physical space that is provided within this new system is greater, the tie-downs are certainly not. NZXT opted for velcro straps screwed down to the interior instead of creating loops for the straps to look through. While they are secure, the point that the straps are screwed down could serve as a failure point if the right amount of tension is put on the straps. Even with my light building, I saw small tears beginning in the straps.

Moving to the back of the case, I installed a power supply and ran cables to the motherboard, CPU, and internal peripherals. While running the CPU cable, I noticed that there were significantly less anchoring points within the H5 than the H510. The case almost forces users to utilize the existing velcro straps instead of being able to zip tie cables into place. The routes are good, but removing the flexibility for the end user is a bit unfortunate. What was good, however, was the space allotted for access to top-of-the-case connections like CPU power and fan plugs. Even with my meaty mits, I could work with ease in the space.

Since I was in the neighborhood, I started wiring up fans and running cables to the RGB Controller module. I found myself a bit disappointed in the decision to change the controller module inside of this Elite case. Since this unit only controls RGB, I could not run the case’s fan cables into one module like I could with the H7 Elite and H510 Elite cases. Fortunately, the Kraken Z63 had enough fan connections to run the included fans all together. Had that not been the situation, I would have needed to pick up a splitter cable – and that would have only been for the stock fans within the case.

With fans and RGB wired, I removed the rear PCI slot shielding to install NZXT’s PCIe 4.0 Vertical GPU Mounting Kit. It slid into place with ease and once secure, we installed the ASUS KO GeForce RTX 3060 Ti OC Edition bracket. And, then, I discovered another change in the case: because of the bottom fan, the slot that NZXT usually leaves open for GPU power cables is gone. With a little creative cable routing, we got everything situated within the build.

NZXT’s H5 Flow and H5 Elite bring a significant amount of change to NZXT’s 5 series. Redesigned to favor airflow, the new H5 gives system builders more options for fan mounting, including an interestingly mounted bottom fan. While the diagonal design takes up a significant space in the bottom of the case, it certainly adds an option for pushing air out, helping thermals stay down.

It is worth noting that we are seeing an increase in the size of more premium components, like the RTX 4090 and a number of the more premium Ryzen 7000-series and 13th Generation Intel motherboards moving to an EATX format. If you are hoping to utilize any of these components, check the measurements; the H5 Flow or H5 Elite may not be a case for those kinds of builds.

Since my review model was the H5 Elite, I have to share some of my critiques with the case. I am conflicted about whether the right changes were made to keep it up to date or if I just love the H510 Elite too much. I never thought that I would write these words about an NZXT Elite case, but it seems like with each Elite version, the cases are getting less “elite” with each iteration. The H7 removed the extra light strip and the H5 Elite downgraded the controller module to control only RGB. That being said, the H5 Elite is only $45 more than the H5 Flow – and it is easy to see where that money gets you: RGB lighting, controls, and a tempered glass front panel.

All things considered, the H5 update is a welcome step forward for NZXT in many areas, but with a few awkward missteps along the way. Are they enough to warrant pause? I think not. The priority placed on airflow and the redesigned look make this one of the cleanest-looking  cases NZXT has to offer in the smaller mid-tower range.