Once again, NZXT reaches outside the PC case with another peripheral for the modern gamer: a keyboard… or, more appropriately, a series of keyboards. We have our hands on not one, but three of NZXT’s new FUNCTION modular mechanical keyboard. But, that’s not all: what if NZXT built your perfect mechanical keyboard for you?

We are going to see where this customizable rabbit hole might lead us.

The FUNCTION series continues what the NZXT CAPSULE started: a play for desktop take-over. Now with a line of keyboards and the new LIFT mouse (that’s another article), it seems like NZXT is aiming to cover more of your desktop’s real estate than ever before.

Offered in full-sized, tenkeyless, and miniTKL, the FUNCTION adds, well, function to NZXT’s typical aesthetic form through programmable key macro and buttons to lock out the Windows key, change RGB brighter as well as mute audio. There is also a volume wheel located on the left-hand side of the keyboard so users, as NZXT puts it, will not “need to let go of your mouse.” Pretty handy.

Each standard retail FUNCTION keyboard comes equipped with Gateron Red switches with ABS shine-through caps to put your RGB stylings on display. The Gateron Red switches are linear-style mechanical switches with light actuation for quick key commands. While this setup serves as the starting point for each FUNCTION keyboard, the switches are hot-swappable and the keycaps have a standard bottom row across models, paving the way for one of the FUNCTION’s biggest assets: customization.

For a nominal fee ($9.99 USD), the options open up a little broader. Alongside the standard matte black and matte white models, NZXT offers a gunmetal gray platform, along with the option for gray keycaps and five additional accept cap colors to choose form. There is also a wider variety of Gateron switches that become available to consumers as well, including Gateron Blue, Gateron Brown, Gateron Silent Black Ink, and Gateron Aliaz Silent. It is worth noting that the Aliaz Silent and Black Ink switches are considered to be a premium upgrade that will tack on  $69.99 for the Tenkeyless as well as the miniTKL model and $79.99 for the full sized FUNCTION. This works out to roughly $.79 per switch, which has a slight markup, but it isn’t a terrible price for the consumer overall.

For our review, we had NZXT make us a gunmetal gray miniTKL FUNCTION with Gateron Aliaz Silent switches, gray keycaps, and purple NZXT purple accents. We also picked up a purple cable to go along with it. The cable did cost extra, but it ties the aesthetic style together nicely! 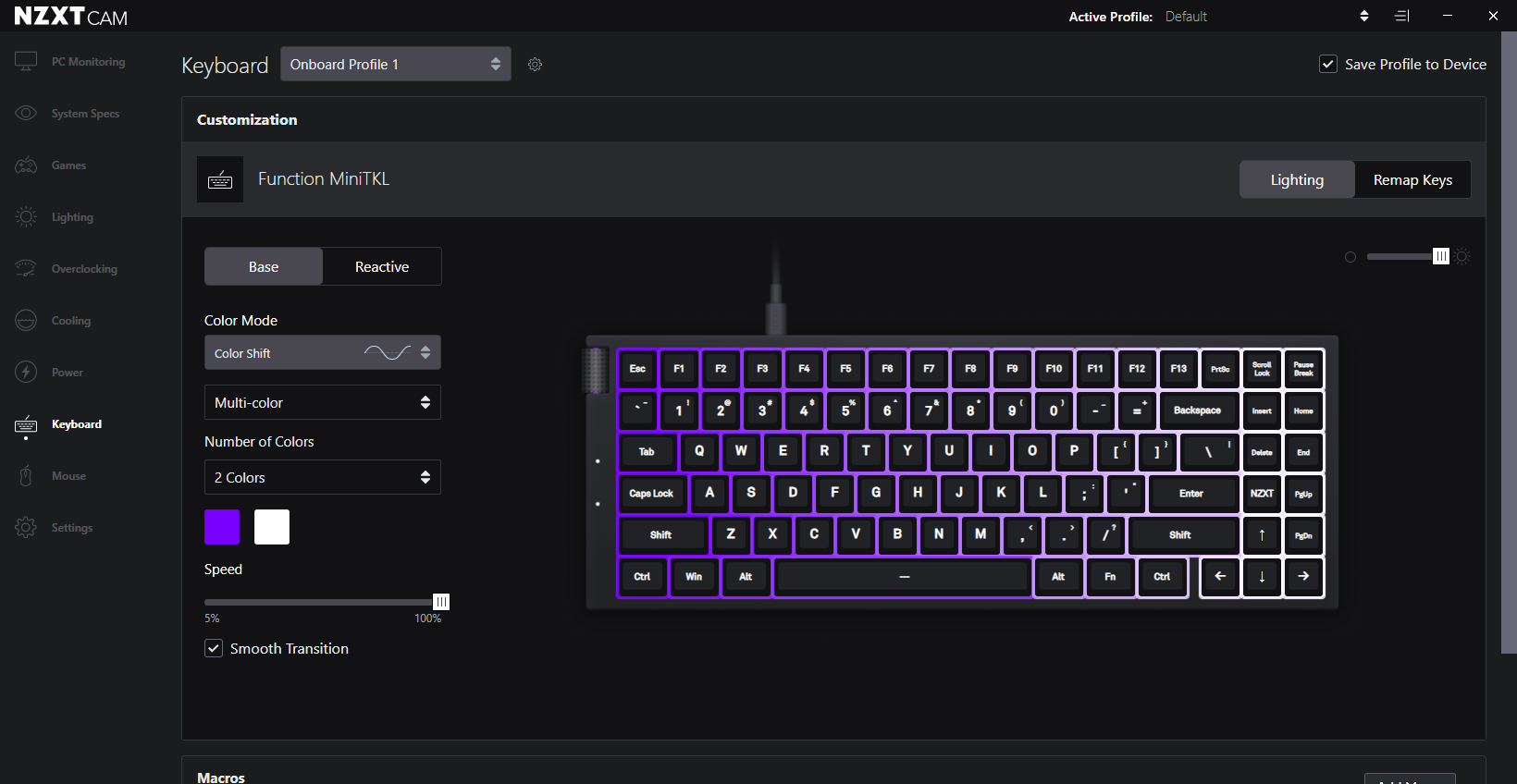 Whether the FUNCTION is a standard retail edition or a direct-to-consumer custom, both are powered by NZXT’s CAM software. If you aren’t familiar with it, CAM serves as more than RGB control, it is a software suite that, yes, can make your keyboard look pretty, but it can also monitor system activity, thermals, and assist with overclocking. Focusing in on the functionality of CAM’s control of the FUNCTION, users have 6 lighting options with multiple points of customization, remap keys, and set up macros.

After a few weeks of daily use, the retail keyboards feel okay, but it was our custom board that felt a touch better. The platform for both is the same and the construction feels solid. Each carries on NZXT’s minimalist design philosophy to a point, but, ultimately, they failed to really wow us after the first time out of the box. Then, too, NZXT does bill these as entry-level mechanical keyboards.

The miniTKL we had NZXT customize for us felt a bit better with the alternate switches and upgraded keycaps, but rickety stabilizer bars took most of the “silent” out of the Gateron Aliaz Silent switches. This does feel a little insulting after spending an extra $70 charge for a premium experience. We were able to correct the noise with about $15 worth of extra supplies as well as 10 - 15 minutes worth of tear down, lubrication, and reassembly, but some of the larger keys still felt a bit wobbly. 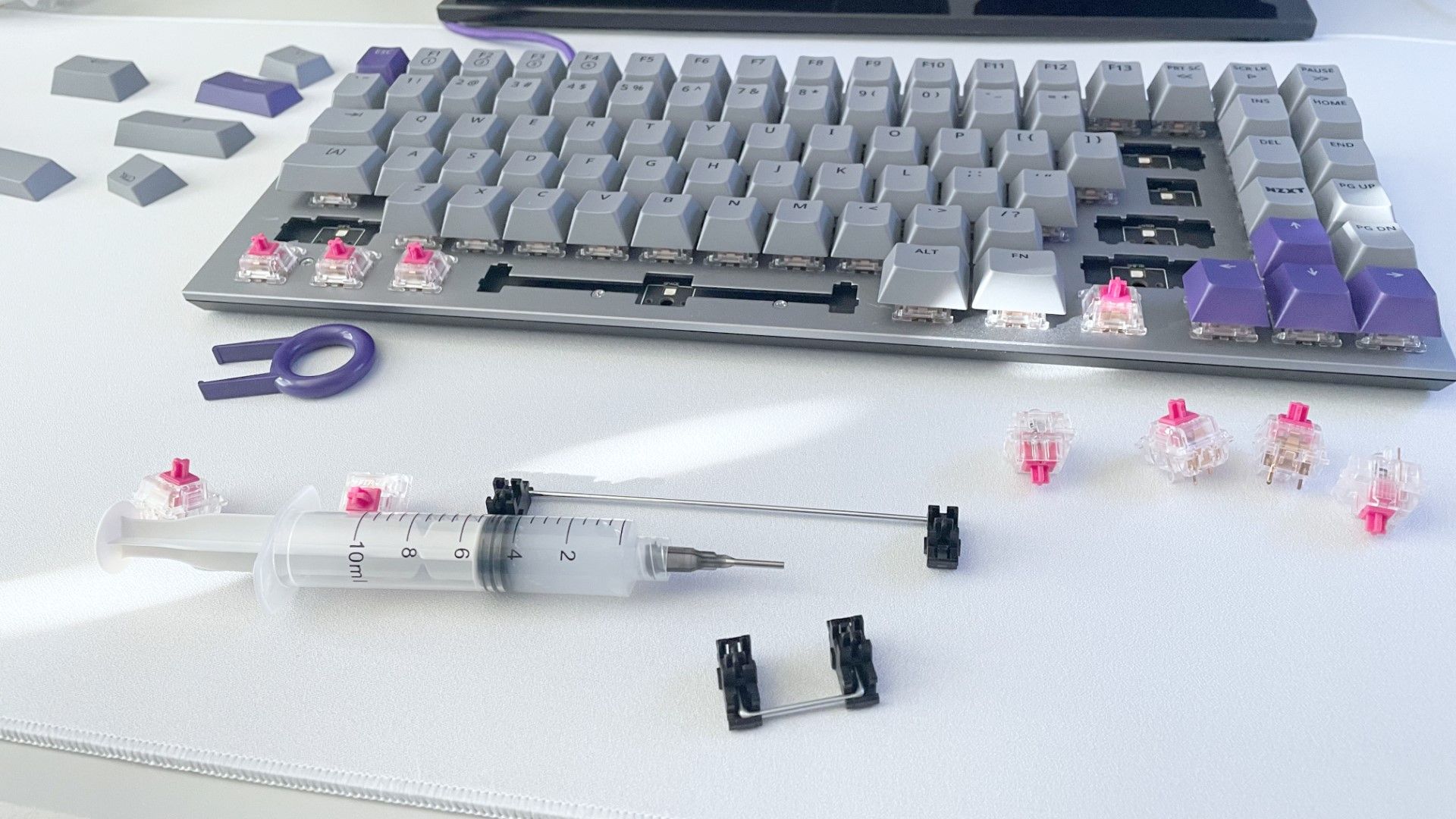 While we’re on the topic of the miniTKL, there are a few omissions from this unit that leave me scratching my head a bit. The first omission is that there is no LED caps indicator on the keyboard outside of a color change. This is really unfortunate if the color you are choosing is white or if you are using the custom keycaps… which don’t shine through. This omission is a bit understandable since there is no extra real estate on the board to add an LED indicator without completely changing the layout of the others. The omission that I don’t understand is the choice to not include wrist rest with the miniTKL - especially since there is no real price savings advantage to the consumer for its absence.

I want to be clear: these aren’t terrible keyboards; construction and feature sets of each FUNCTION keyboard are decent, but decent feels like an unfortunate low bar at the price points. The biggest value, in my summation, is the ability to have the keyboard built to your specifications… at least within the confines of what NZXT offers. To be fair to NZXT, this price range is home to many other big-name keyboards that all fall into some similar mediocrity.

With full-sized, ten-keyless, or miniTKL, the FUNCTION series from NZXT is a line of modular mechanical keyboards aimed at consumers who love the company’s penchant for minimalist aesthetics and who are curious about customization. Matte finishes paired with programmable RGB stylings put the FUNCTION right at home next to the newly minted CAPSULE mic as well as PC cases that the brand is known for.

The series, however, is not without its quirks. While we really appreciated the modern features of the FUNCTION series - easy-to-reach media buttons, hot-swappable switches, and even the customization service - we found a few areas where the FUNCTION is lacking, especially in the miniTKL model. Stripping this version of the keyboard of features included in the rest of the series while keeping the price differential the same feels like a poor move. 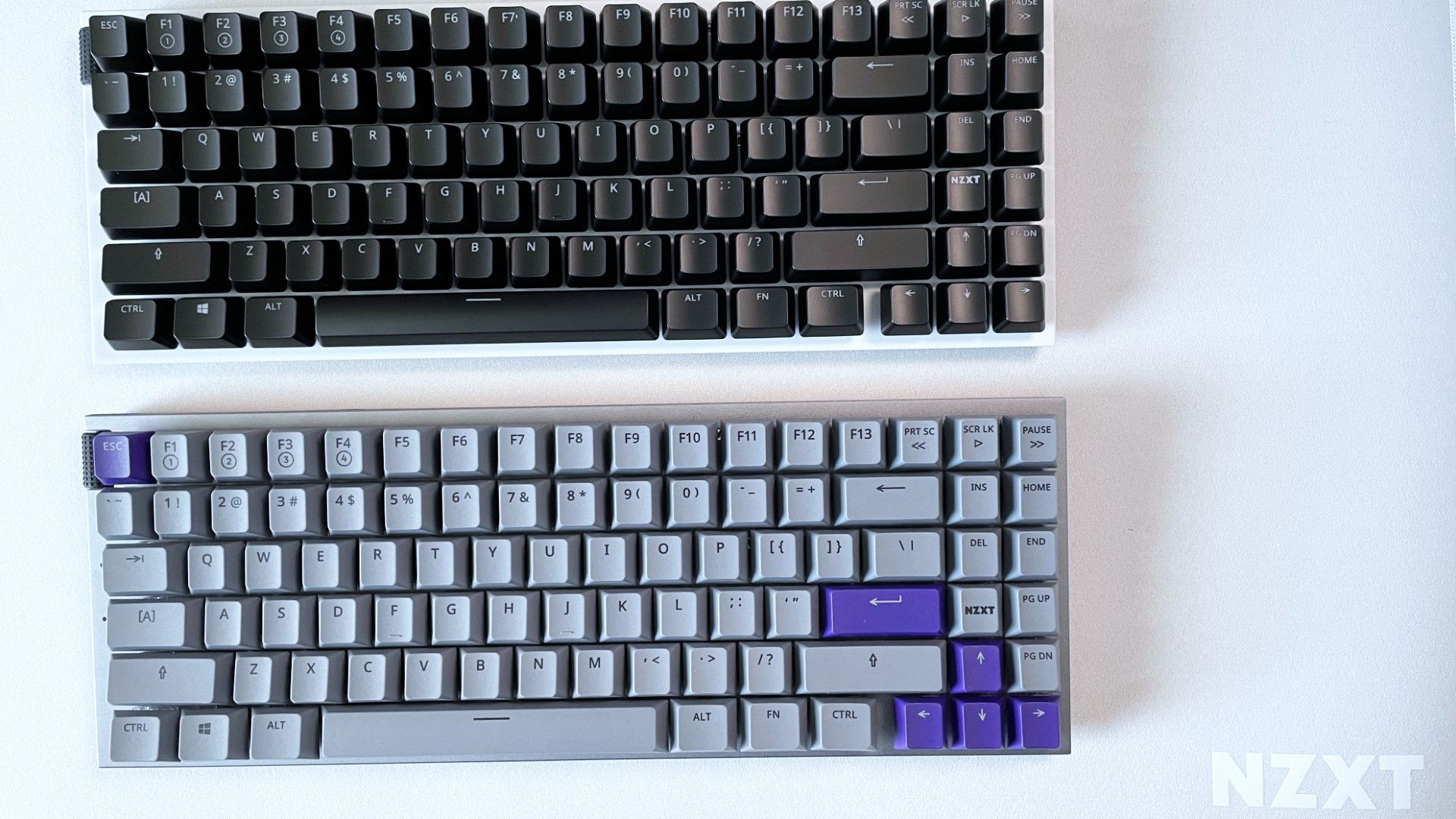 Where the FUNCTION series really shows its best potential is this: it is a platform to build from and experiment with. With a myriad of hot-swappable switches out there, there are a number of options for growth and discovery with the keyboard rather than replacing the entire unit when the itch to try something new strikes. The beauty of growing with a platform like the FUNCTION is that it’s backed by NZXT’s own CAM software - making it even more desirable if you are using something within the ecosystem (like a Kraken) already! Having in-house software support can make or break a peripheral.

At the end of the day, NZXT has stepped into a new arena with a bit of a stumble… a stumble that we hope serves as a launching point for future FUNCTION releases.