With the release of Nvidia’s RTX 30-series, a lot of the buzz has surrounded the monstrous top of the product stack. After all, we love our high frame rates and fancy advancement to GPU technology! However, one of the more exciting pieces of news with the RTX 30-series release for the every-gamer has to be the RTX 3070. With promises of performance to match or succeed that of the colossal RTX 2080 Ti, last generation’s juggernaut, for a fraction of the price - that is a win all around… it is also a hotly anticipated battleground for future competition.

Today, the wait is over and we finally get to marvel over the first shot across the proverbial bow in a battle for uncompromising mid-ranged performance. This is our review of the Nvidia RTX 3070 Founders Edition.

After reviewing the RTX 3080 and RTX 3090, Nvidia’s RTX 3070 is adorably dainty in comparison! It isn’t a small GPU, but it favors the RTX-20 series in size more than the rest of the Ampere-based line. In its thermal design, it is similar to the other 30-series Founders Edition GPUs, but the RTX 3070 deviates a bit from the pack in fan operation. While this design is a bit avant garde, it worked exceptionally well in the RTX 3090 Founders Edition. We will have to see how the 3070’s take on the design performs in comparison. 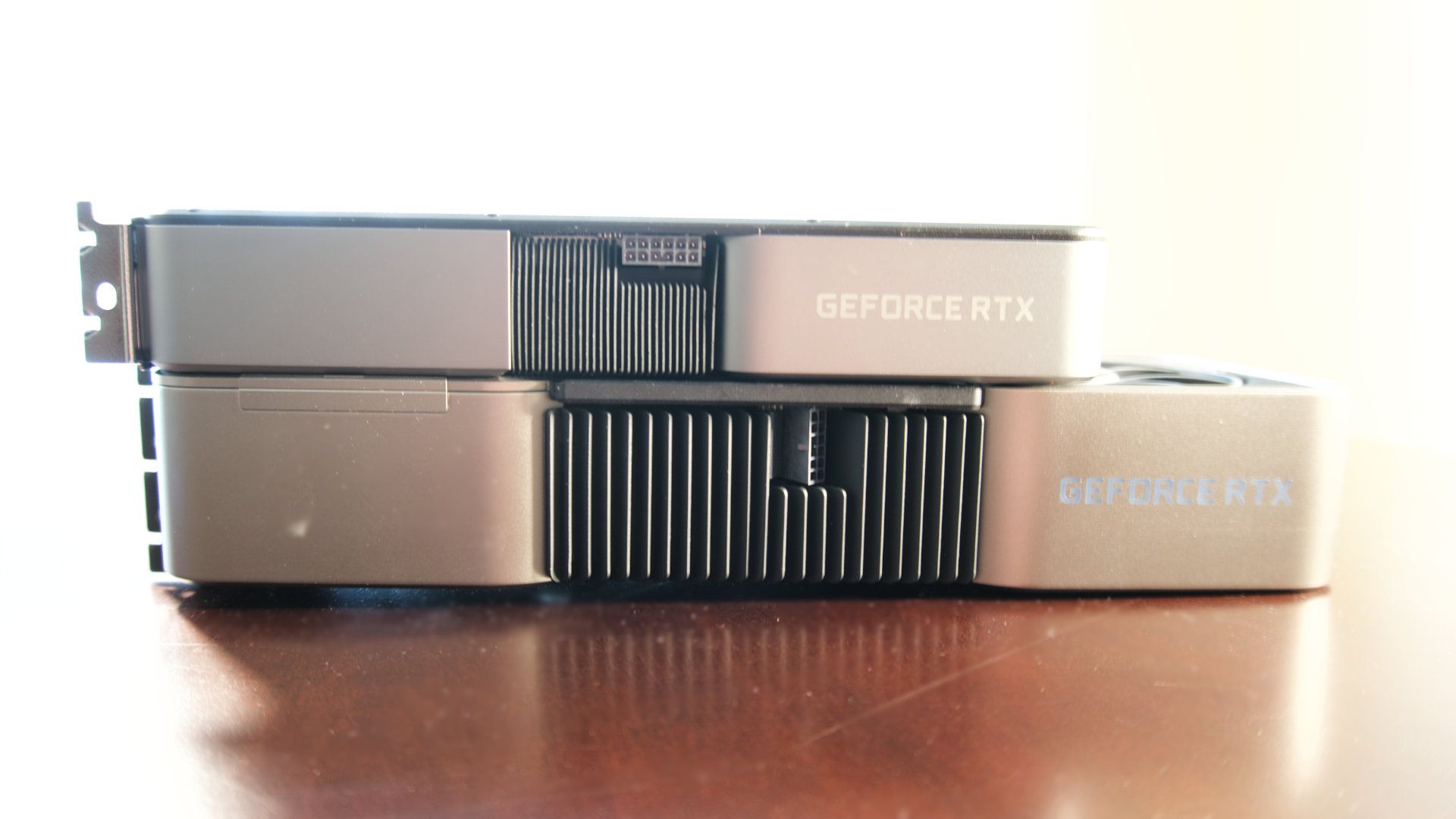 While it was initially announced for an early October release, the RTX 3070 comes to us a bit delayed. It is, however, arriving in time to compete in the anticipated price bracket for AMD’s “Big Navi” GPUs: the $400 - $600 GPU price bracket. While we can’t speak yet to what AMD has planned at the time of writing this review, Nvidia has certainly made a statement with the RTX 3070… and I am not going to make you wait until the end of this review to tell you what that is: the entry point to high-power graphics performance just got a whole lot more accessible.

The Nvidia RTX 3070 delivers on Nvidia’s promise of 2080 Ti performance at a fraction of the price, but it does, however, come with some concessions. The RTX 3070 comes equipped with 8GB of DDR6 versus the 11GB of the 2080 Ti, not to mention that the memory bus for the 3070 stays on par with its counterpart from the previous generation. What we discovered is that even with these concessions, the RTX 3080 still has plenty of fight in it and that the Ampere architecture is no slouch - even when at a technical disadvantage.

Let’s take a look at the numbers now. 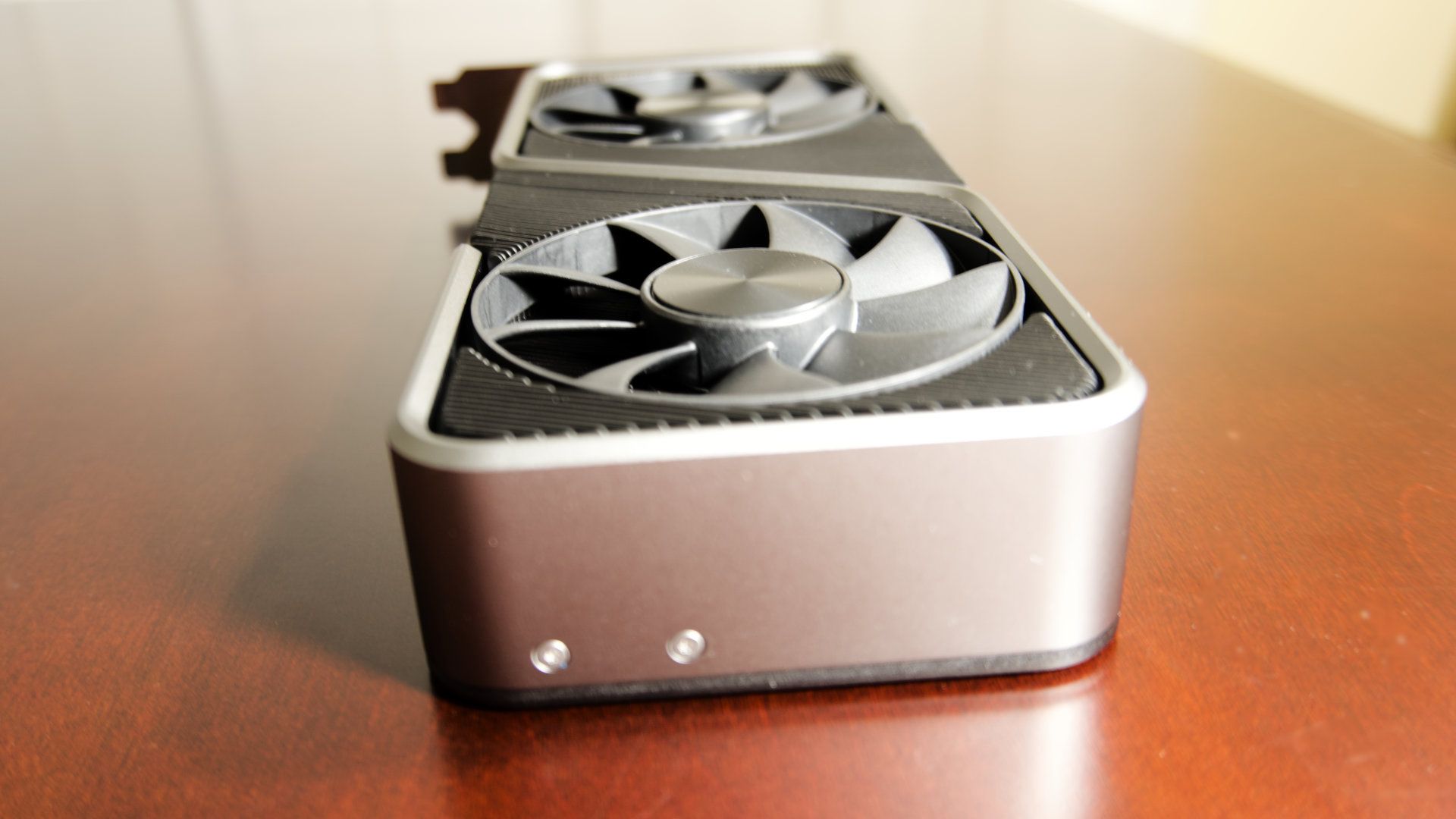 For our comparison, we will be looking at data collected from benchmarks across a series of tests which utilize a diverse range of graphic APIs. This will give a broad overview of how the RTX 3070 will perform, largely, in comparison to the Nvidia RTX 2080 Ti.

While our main focus will be on performance within Nvidia’s own product stack, we will also be including numbers from MSI’s Radeon RX 5700XT Gaming X. Much as we did in our review of the RTX 3080, these numbers are included to paint a picture of how AMD’s “Big Navi” needs to perform in order to box with the RTX 3070… but we’ll have to wait just a little bit longer to see who will win that fight!

To begin, let’s look at raw power in rasterization: 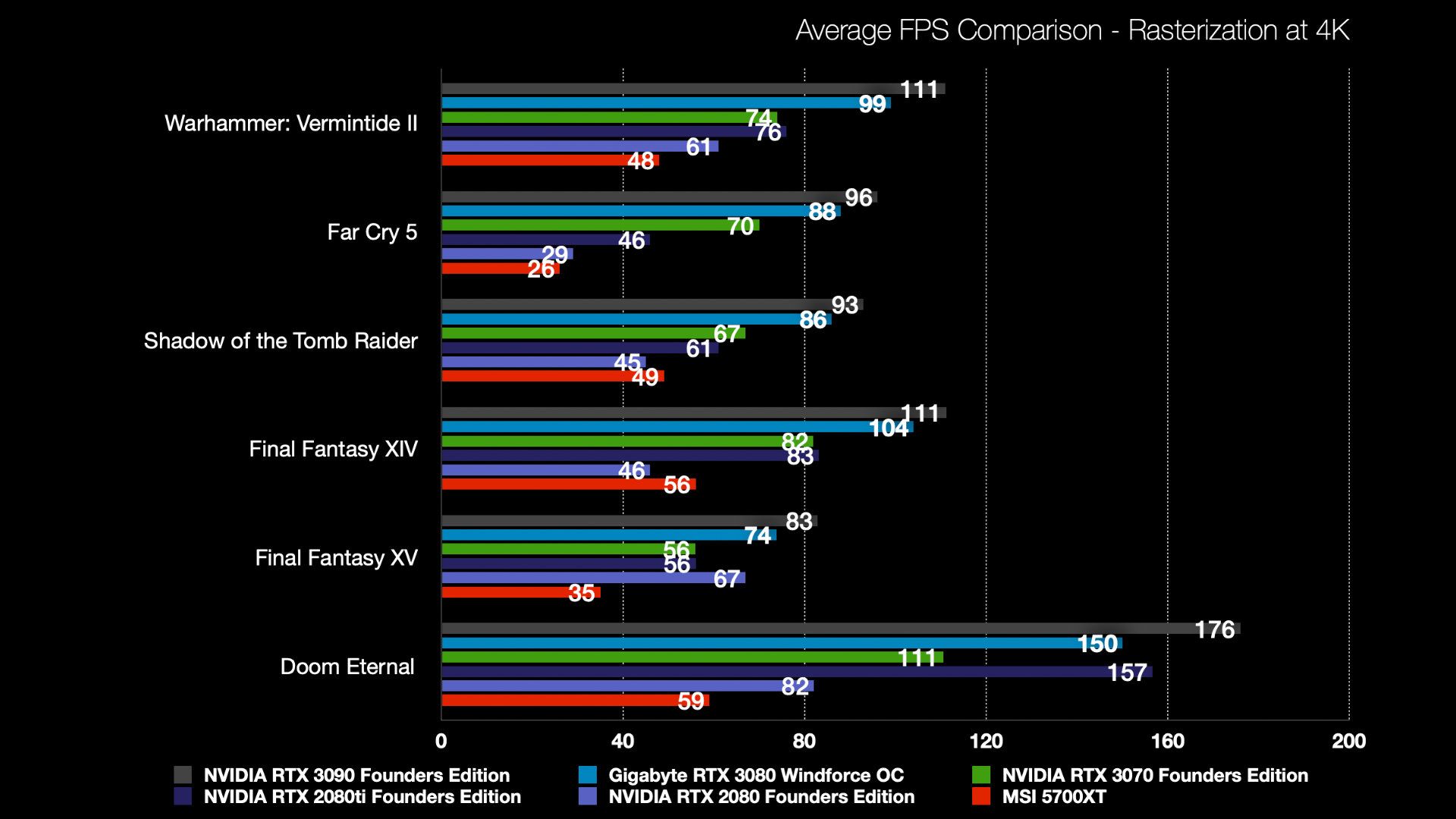 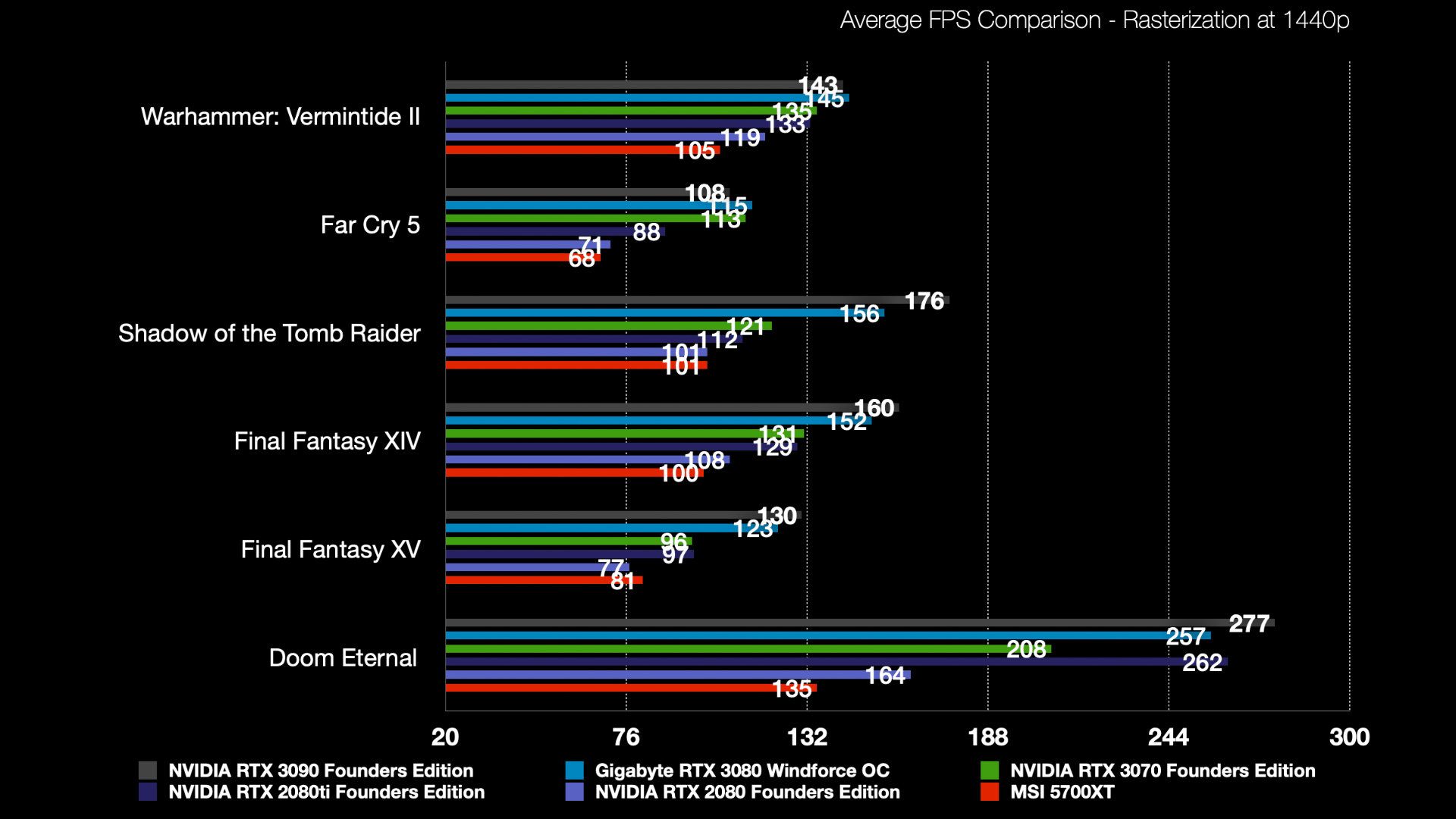 In our 4K gaming tests, the RTX 3070 showed a 4% average performance increase over the RTX 2080 Ti. We did see some significant performance jumps in Far Cry 5 and we saw a marginal increase in Shadow of the Tomb Raider, but, overall, things stayed fairly consistent across the board. Keep in mind, these are numbers purely rasterization - no DLSS or RTX… those numbers will come later. 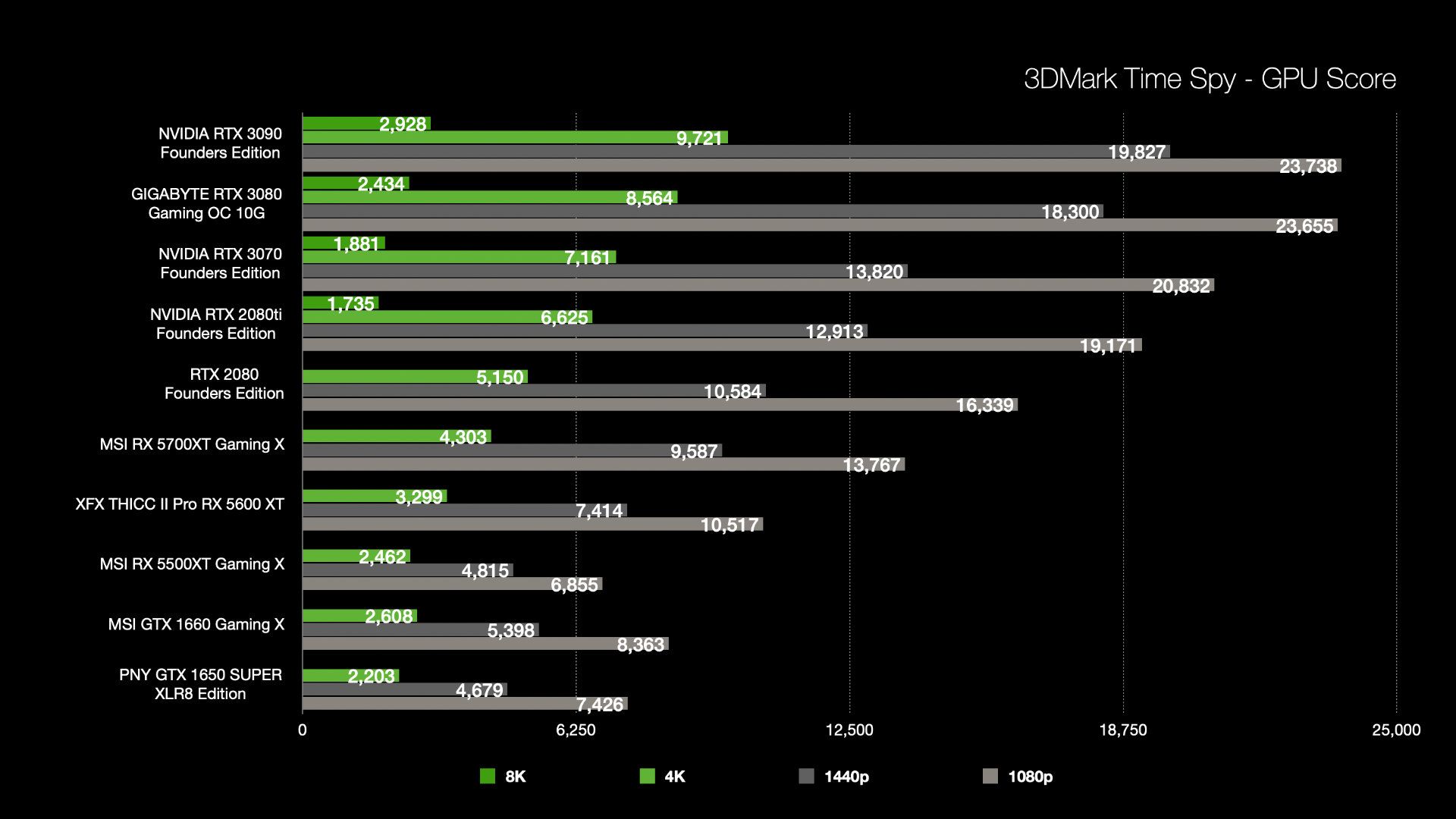 An important note with these numbers: we are using Nvidia’s Dynamic Super Resolution (DSR) to capture any data for 4K and above. This means that there will be a slight performance hit (~3 - 5%) for both generations. Remember: the scores we just looked at are based purely on rasterization. Even though the 3070 is fighting for ground against the 2080 Ti, these numbers show a generational leap in GPU core technology - operating on par with fewer resources to work with. But, we’re not done yet; let’s get fancy with some real-time raytracing! 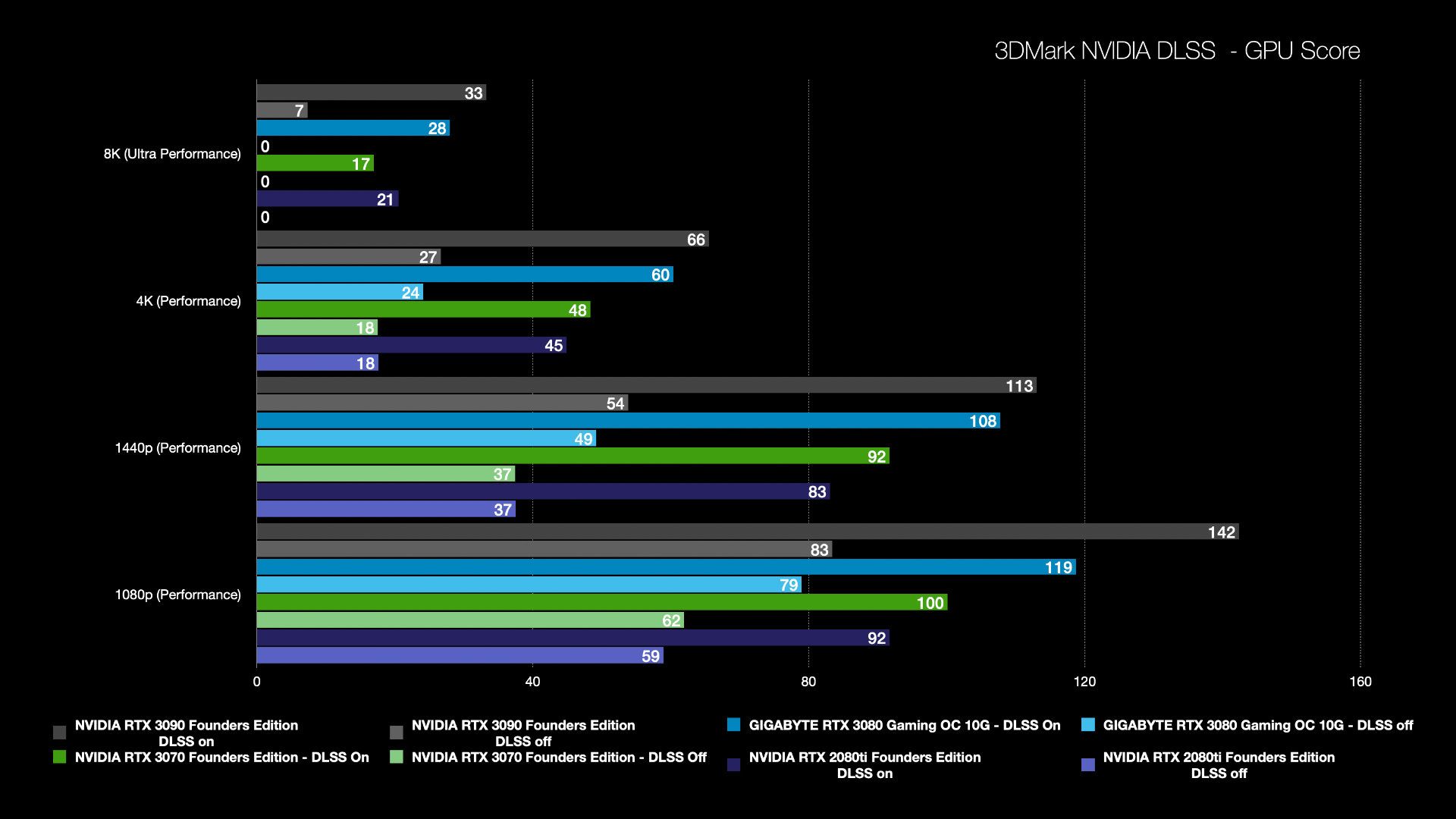 With the maturation of DLSS and the inclusion of real-time ray tracing in more modern titles, it is interesting to get a broader look at the technology, especially with hardware that can handle that performance load. While the rest of the RTX 30-series has a spectacular showing in this arena, the RTX 3070 does alright with DLSS and RTX enabled. As we look at these charts, keep in mind what we are looking for: performance on par with the RTX 2080 Ti. And, that is largely what we see in most instances. 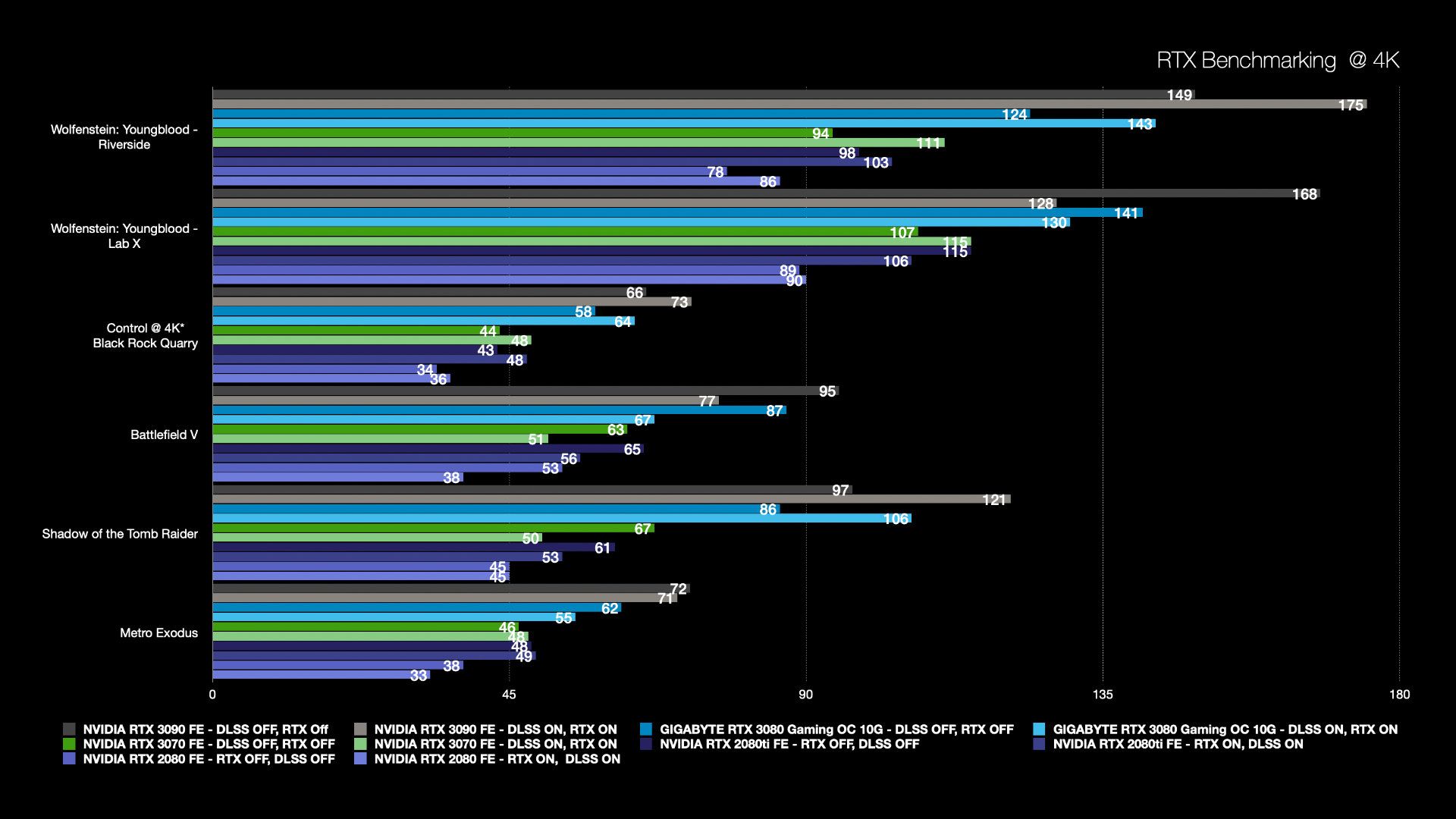 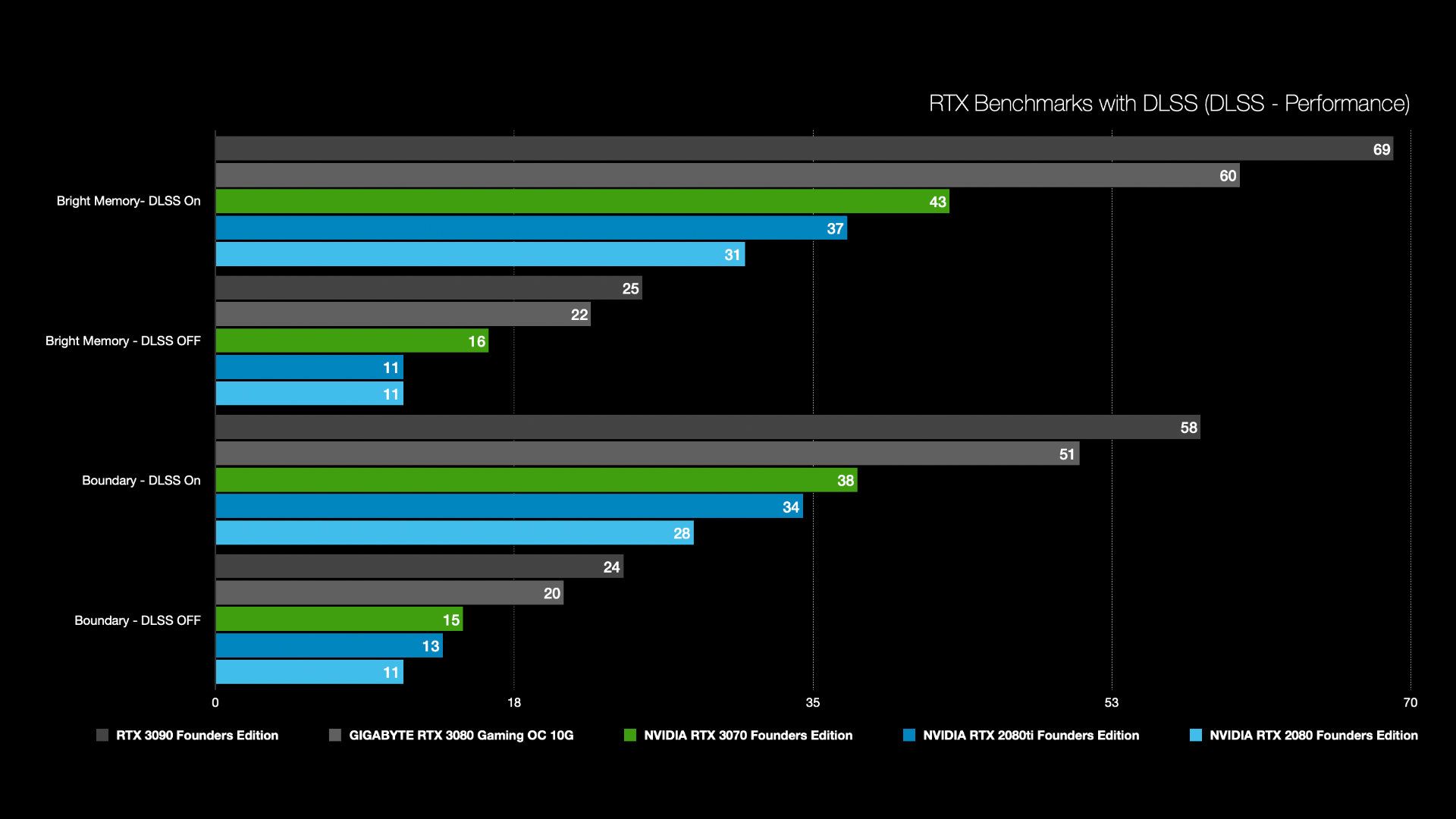 At 4K, the RTX 3070 sticks very, very close to the performance of the 2080 Ti with both RTX and DLSS enabled. This is amazing considering that the RTX 3070 has a slower memory bus and less GDRR6 than the 2080 Ti while taking advantage of the current generation’s architecture. Achieving this level of performance on less is a testament to Ampere’s power.

Alongside these benchmarks with existing titles, we ran a few synthetic benchmarks specifically aimed at heavy RTX performance from games yet to release. Both Bright Memory and Boundary use heavy shadows, reflective surfaces, and lighting both enhanced by Nvidia hardware. We ran these tests with and without DLSS to show the impact. While the RTX 3070 did not hit 4K60 in Bright Memory or Boundary, what it did do is overtake the RTX 2080 Ti in performance by up to 45%. Not difficult to do in the lower double digits, but improvement is still improvement.

While we saw constantly (and comparatively) lower temperatures out of the RTX 30-series up to this point, the RTX 3070 Founders Edition did not follow that trend as well as the others in the product stack. While the design of the GPU favors the rest of the family, the RTX 3070 does not handle heat quite as well. This isn’t to say that the card runs hot; it still runs significantly cooler than the RTX 2080 Ti. The numbers we saw hovered in the mid-70s Celsius, making it a bit lackluster in comparison to the rest of the 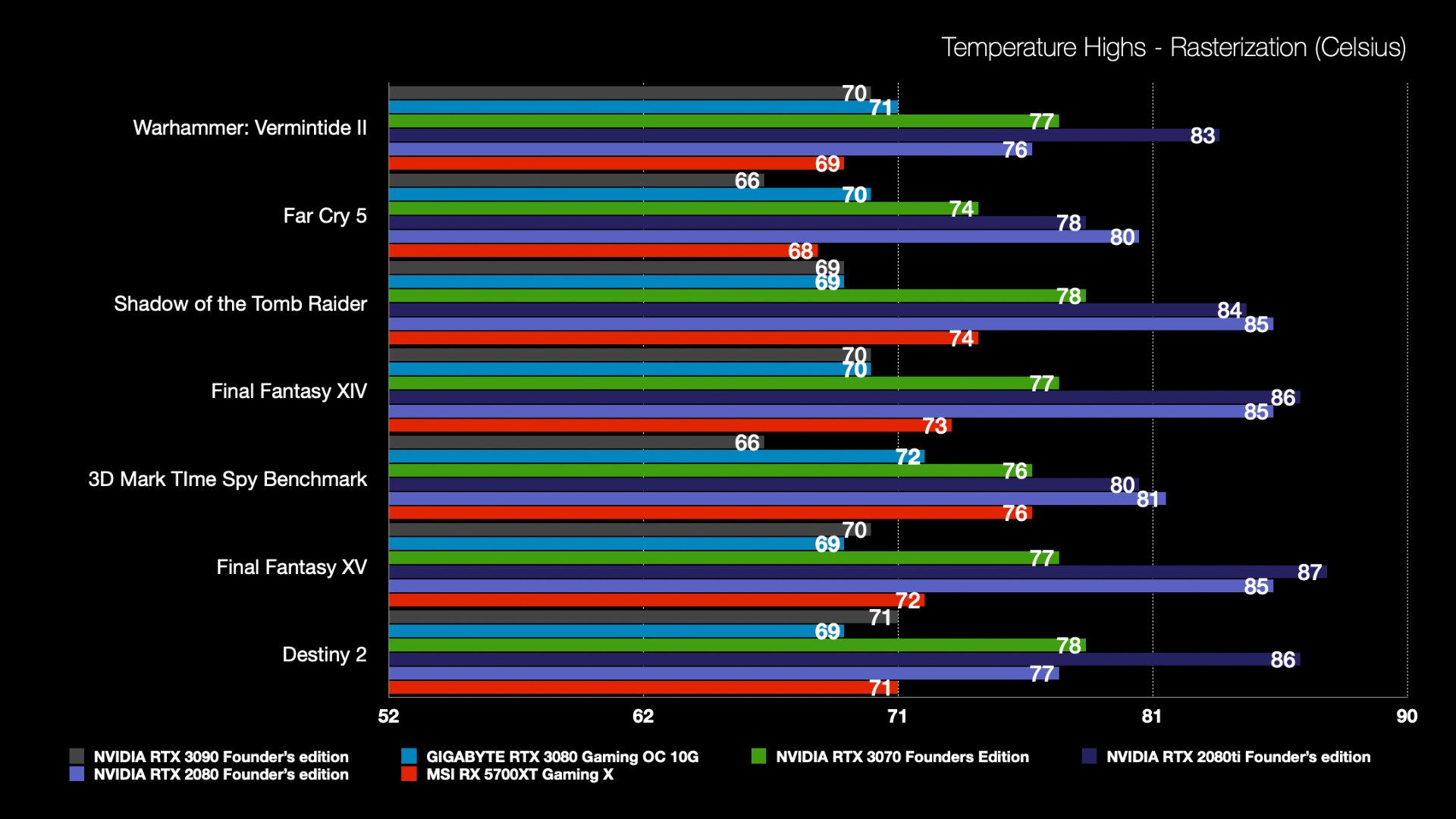 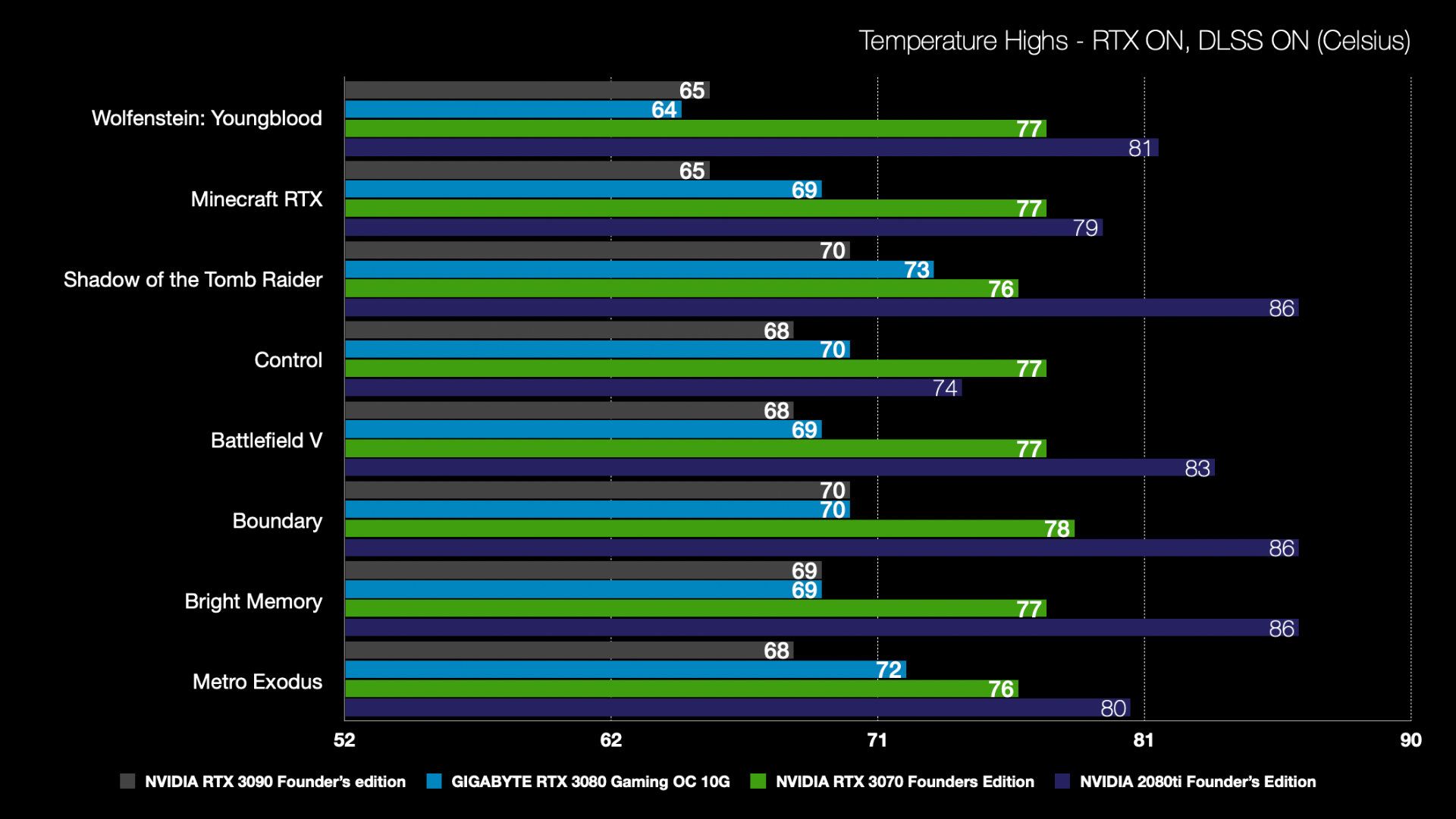 However, when it comes to acoustic performance this GPU keeps things exceptionally quiet. With ambient noise sticking within a normal operating range when compared to case fans, the RTX 3070 Founders Edition’s cooler at least keeps that consistent with the rest of the family. 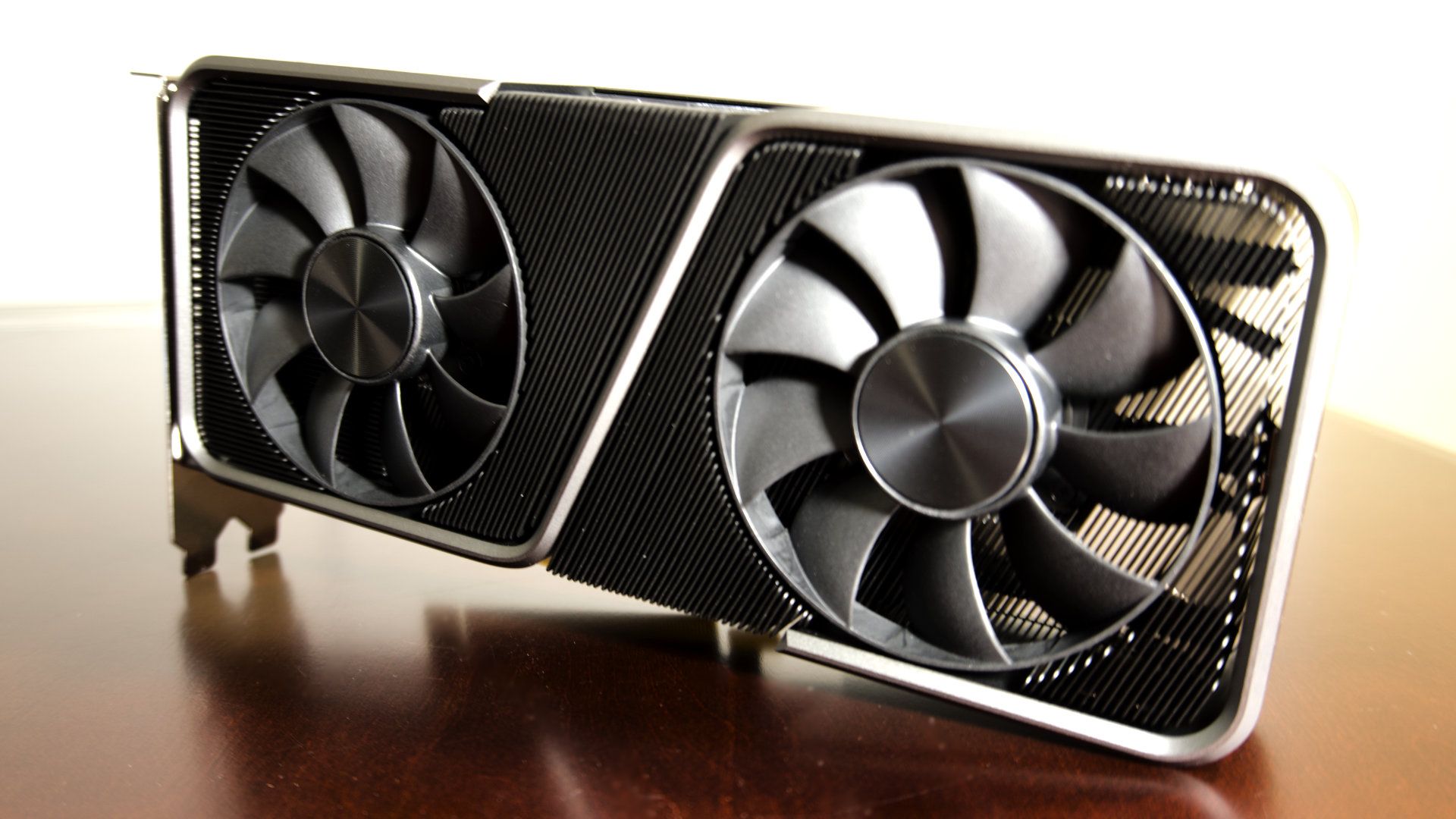 In case you have missed our coverage of the RTX 3080 and RTX 3090 up to this point, Nvidia’s Ampere-based 30-series has been a show stopper, to put it mildly. With a staggering uplift in performance from the previous generation, we have been anticipating just what the RTX 3070 could do… and we were not disappointed!  Simply put, the RTX 3070 lives up to Nvidia’s promise: 2080 Ti performance for a fraction of the price. At least, it does most of the time.

There are a few incidences where we seem to see the 3070 fall slightly behind the 2080 Ti, but it isn’t by much. In pure rasterization tests, we see the RTX 3070 perform reasonably close to the 2080 Ti. But that isn’t all, in the crucial category for the RTX series, real-time ray tracing, we see a similar story: the RTX 3070 fights for position against the 2080 Ti, winning some tests and losing others. Even with the limitations of the memory bus, bandwidth, and amount, the RTX 3070 puts up a good fight.

There are a few design concessions that we see with the RTX 3070 Founders Edition that aren’t necessarily dealbreakers, they are just interesting choices… and may be slightly picky for me to point out. While the RTX 3070 does have a similar thermal design, the change in fan orientation negatively impacts thermal performance when compared to the rest of the 30-series. The performance is not bad, just slightly disappointing that we don’t see that innovation carry over from the high tier GPUs. The final concession with the RTX 3070 is that Nvidia omitted the white LED logo on the side of the GPU… again, not a dealbreaker… it just makes this otherwise premium, custom card slightly less premium. 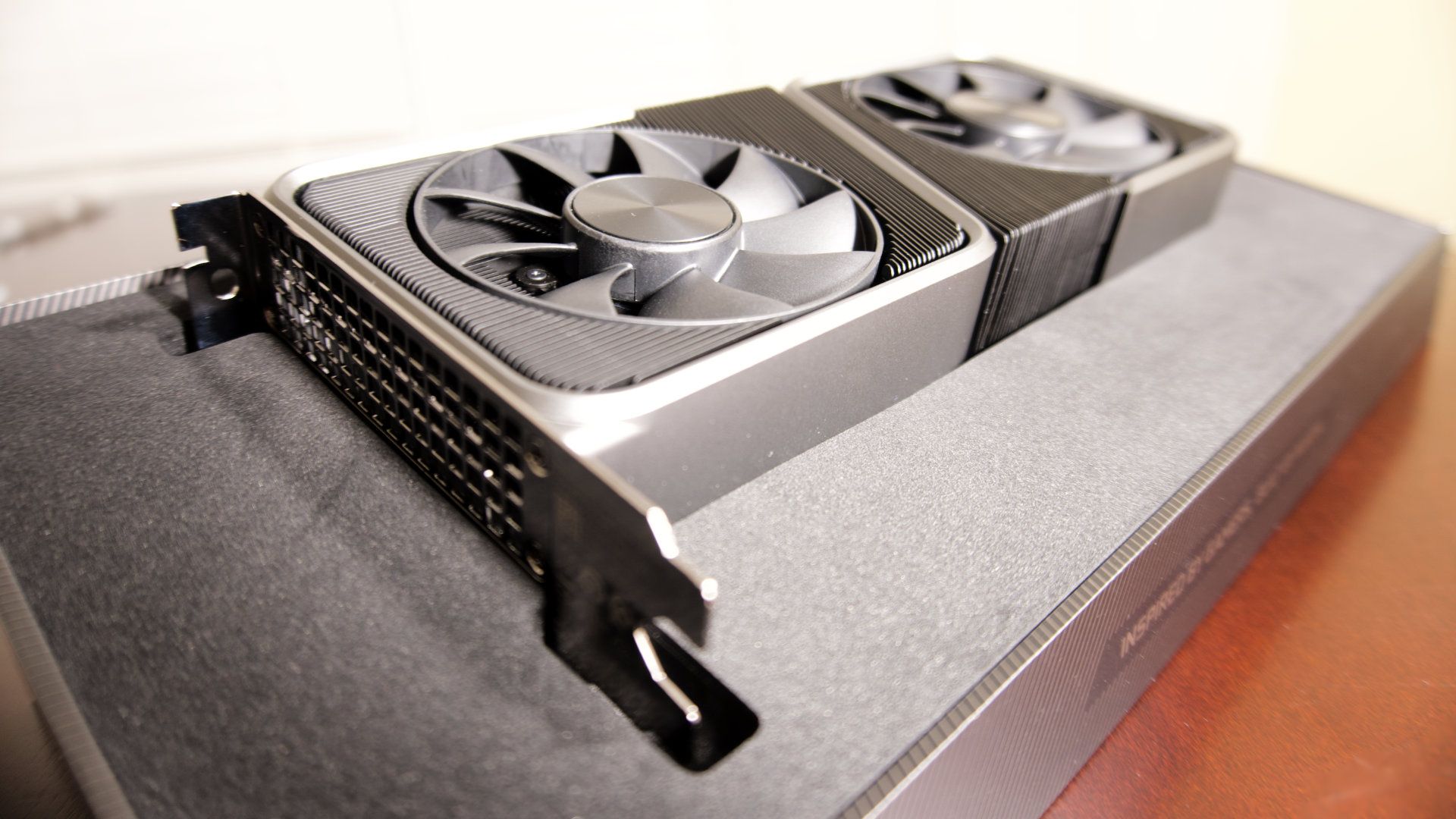 In case you feel disappointed in reading any of this, I want to put all of this information into perspective in a simple statement: the current bottom of the RTX 30-series stack is performing on par with (and occasionally beating) the top consumer-grade GPU in the RTX 20-series… with a $700 gully in between the two. That is huge news! In other words, the RTX 3070 gives greater accessibility to better technology to a broader group of consumers. That is a phenomenal win in my book.

If you are one of the many who has skipped a few generations of GPUs, waiting on the right time to upgrade, this may be the leap you have been waiting for. The Nvidia RTX 3070 offers an upgrade path that is a monstrous mid-tier marvel at a reasonable price point 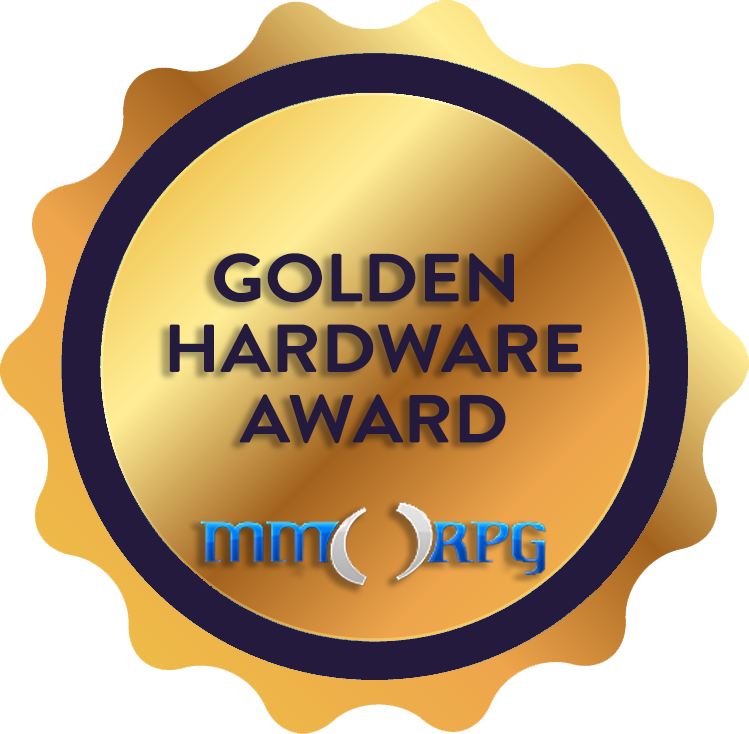