Nvidia last week unveiled the RTX 3070 Ti to the world during their presentation at Computex 2021. While similar in spec to the original RTX 3070 released last fall, this Ti upgrade aims to be a compelling upgrade from last generation’s RTX 2070 Super. But just how does it stack up compared to last gen, as well as last fall’s RTX 3070?

At first glance, you’d be forgiven for thinking the RTX 3070 Ti  was actually an RTX 3080. While the standard RTX 3070 has both its fans on one side of the cooler, the RTX 3070 Ti’s are positioned in the “flow through” design like the 3080, 3080 Ti and 3090. One fan intakes air through the cooler and exhausts through the top of the card, while the other acts as a blower and exhausts out the back of your PC case.  The elegant curves of the 30-series GPUs are back, and I really like the beveling of the central ridge as it adds an angular touch.. It’s an attractive looking card. While I really like the gamified, edgy looks of many graphics cards I’m appreciating the look of the 30-series the more I use them. 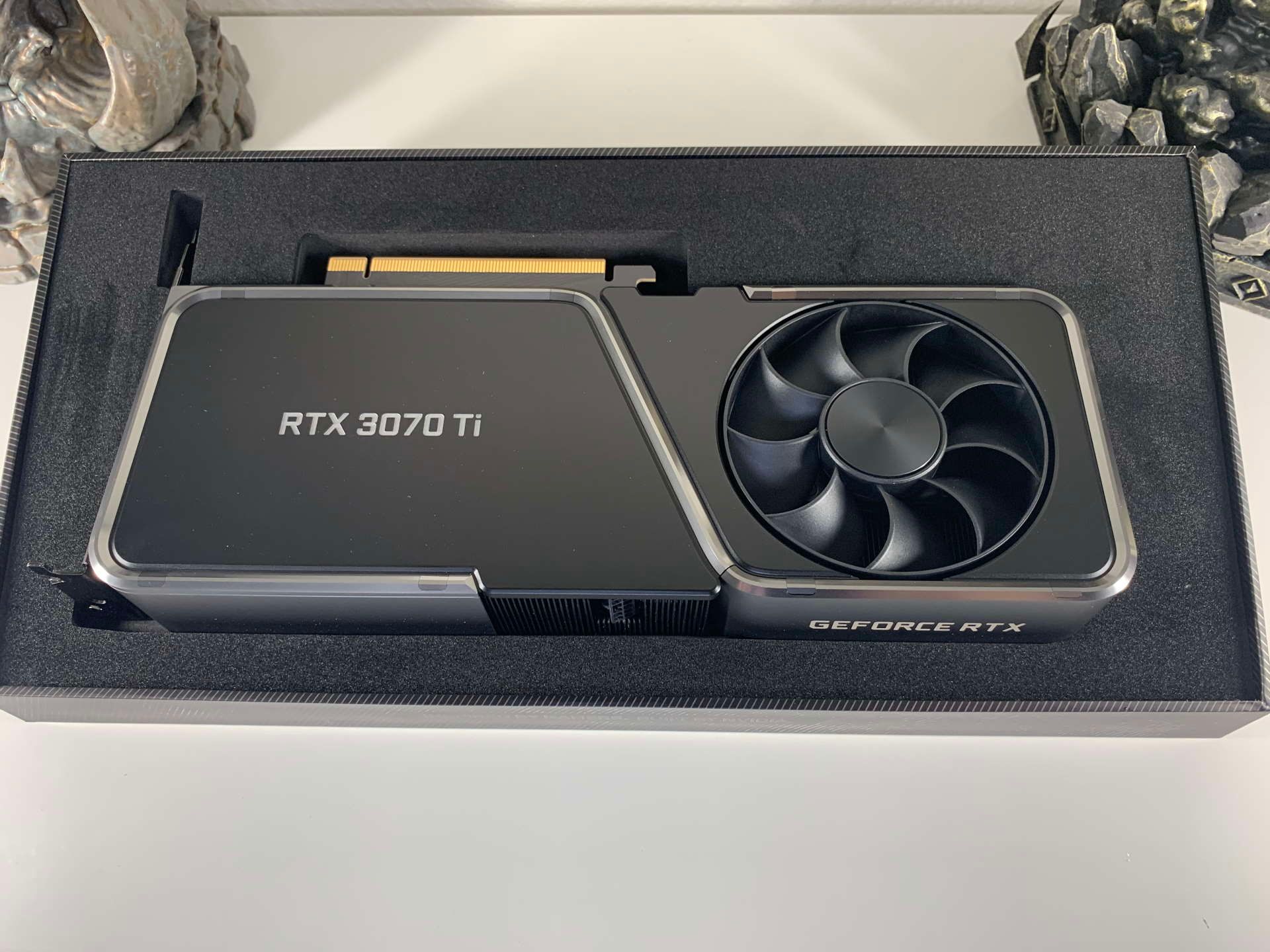 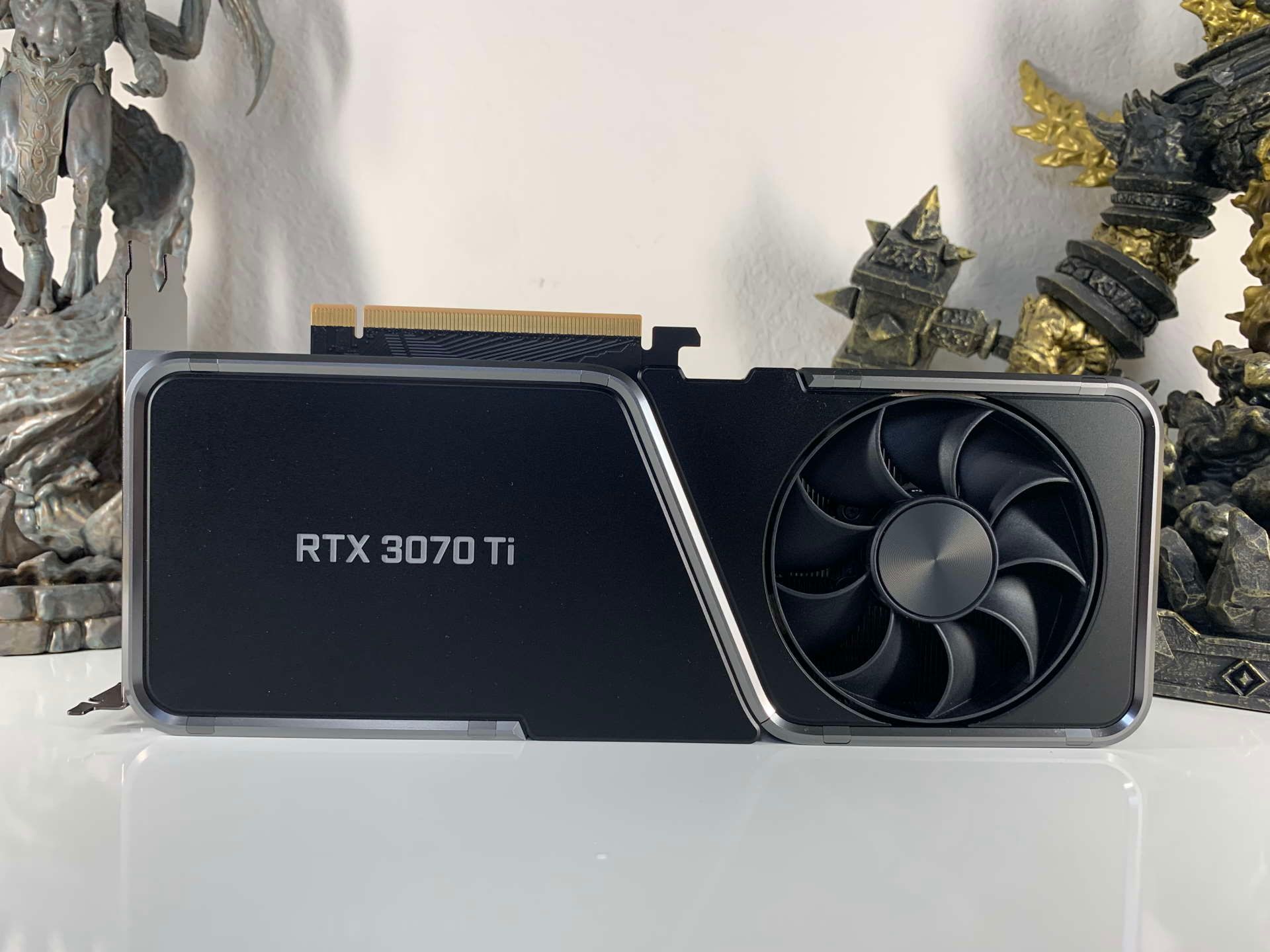 The 3070 Ti also has a higher boost clock compared to the 3070, rated to boost to 1770 MHz while under load.However, I’ve seen this number climb even higher due to GPU Boost 2.0. During our testing, I witnessed a max peak boost clock number of 1895 MHz, well above the threshold set by Nvidia.

The 3070 Ti can take advantage of Nvidia technology like Deep Learning Super Sampling, or DLSS, as well as other features such as Nvidia Broadcast and Reflex. DLSS can be leveraged to increase performance, especially when using expensive features like ray-tracing. And for those streamers out there, the NVENC codec on OBS, as well as leveraging Nvidia Broadcast to create virtual greenscreen effects and more, can up your stream quality considerably.

To start, we put the RTX 3070 Ti through its paces with both gaming and synthetic benchmark tests at both 1440p and 4K. The RTX 3070 Ti is positioned by Nvidia as a compelling upgrade if you’re still hanging onto the RTX 2070 Super or even an older GTX 1070 Ti.It’s important to keep mind the original RTX 3070 was pitched against the 2080 Ti.

For synthetic testing, we used 3DMark’s DX12, DX11, and Ray Tracing Benchmark tests. We pushed the RTX 3070 Ti to its limits by testing the 4K variants of FireStrike and Time Spy. While synthetic benchmarks don’t paint a picture as to how a card will perform game to game, it does give us a rough idea of how the card should behave, especially compared to the other cards in our testing suite.

For gaming benchmarks, we tested a range of games using a multitude of gaming DirectX APIs and engines. From Epic’s Unreal Engine 4, Guerilla Games’ Decima, CDPR’s REDEngine, to Ubisoft’s AnvilNext, we put the RTX 3070 Ti through its paces at both 1440p and 4K resolutions. We used the maximum preset in every game, and bumped up settings even further when needed such as manually setting Cyberpunk 2077’s screen space reflections to Psycho quality.

We used the in-game benchmark tool to create as consistent a run as possible for each card when we could. However, in games where this wasn’t possible, we replicated a circuit to create as consistent a test we could. For Cyberpunk 2077, we walked a prescribed path out of our apartment, past the diner, into the market, and back to our apartment. We also reloaded saves to even the time of day consistent. This is key due to lighting’s clear effect on performance.

Finally, we utilized Nvidia’s Frameview tool to capture frame data, temperature data, and various other metrics utilized throughout this review.

In games like Watch Dogs Legion and Assassin’s Creed Valhalla, we see similar performance to the RTX 3070 and 2080 Ti, especially at 1440p in both games. ACV sees a slight advantage over 3070 and 2080 Ti, but the gulf in performance is more pronounced in the gen-on-gen comparison. The RTX 3070 Ti sits about 24% better than the 2070S, though keep in mind this 2070S card is already overclocked versus the 2070S FE, so it’s safe to surmise the gap would likely be a bit wider when comparing 3070 Ti FE to 2070 FE.

Final Fantasy XIV Shadowbringers sees the gap between 3070 ti and 3070 widen a bit, with a 6% uplift in performance at 1440p and a 8% increase at 4K. Horizon: Zero Dawn is similar, with the 1440P benchmark seeing a 5% increase, though the 4K numbers are around 8%. This is pretty consistent across the board, with the 3070 Ti seeing increases in Cyberpunk 2077, Control, A Total War Saga: Troy and Shadow of the Tomb Raider over the 3070. However, the differences for many would seem minimal, with a few extra frames here and there.

When compared with the 2070 Super, we see the 3070 Ti pull out wins across the board. Sometimes, this results inlarge gulfs, like Cyberpunk 2077’s 27% increase over the last generation card. Sometimes the uplift is enough to get the performance of a game to a more playable state, such as Control’s 48% uplift in performance for the 3070 Ti at 4K over the 2070 Super, bringing the average closer to 40 FPS versus the 25 FPS on the latter. 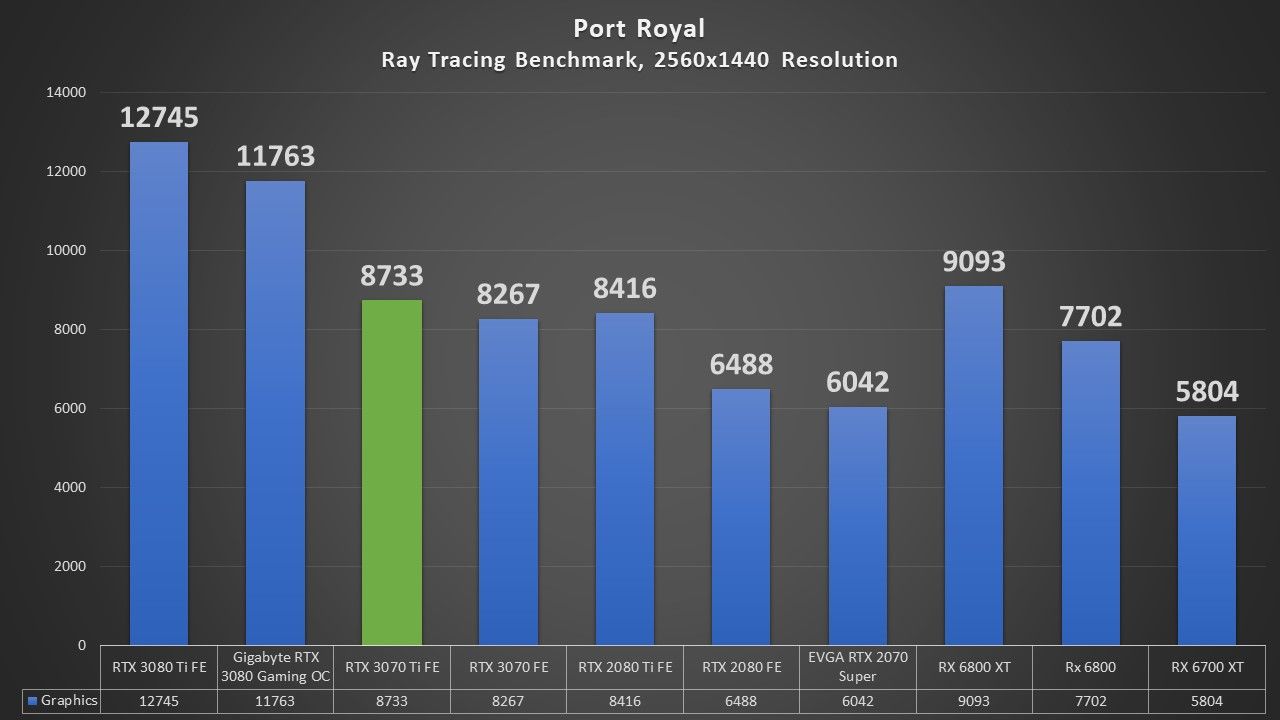 With gaming tests, we ran the 3070 Ti through its paces with a few games that feature different RT uses, such as the full implementation seen in Cyberpunk 2077, reflections-only Watch Dogs Legion, and the ray traced shadows found in Shadow of the Tomb Raider.

When comparing the RTX 3070 Ti to the AMD competitor, especially the RTX 6700 XT, the AMD cards can hang at the start, though this is dashed when the former leverages Nvidia’s DLSS to get back the performance lost with ray tracing enabled. While AMD is rolling out its DLSS competitor, FidelityFX Super Resolution,  this wasn’t available at the time of this testing.

From there, the numbers are as expected compared to both 3070 and the 2070 Super. The RTX 3070 Ti stays ahead of the RTX 3070 in Cyberpunk, though 1440p with DLSS Performance shows identical results.

The RTX 3070 Ti also keeps up with the more powerful RX 6800 XT, beating it in Shadow of the Tomb Raider before DLSS is turned on. In fact, AMD’s card ekes out wins in Watch Dogs Legion until the 3070 Ti enables DLSS, thus further showcasing how much of an asset the technology is for Nvidia’s GPUs.

The RTX 3070 Ti is rated with a 93 degree Celsius thermal threshold, and while my card ran hot – peaking at 86 degrees Celsius under load – I was never too worried. The card itself also was rather quiet, especially compared to the RTX 3080 Ti we reviewed last week. While fan noise is discernible under load, it was never an issue, even with headphones off. 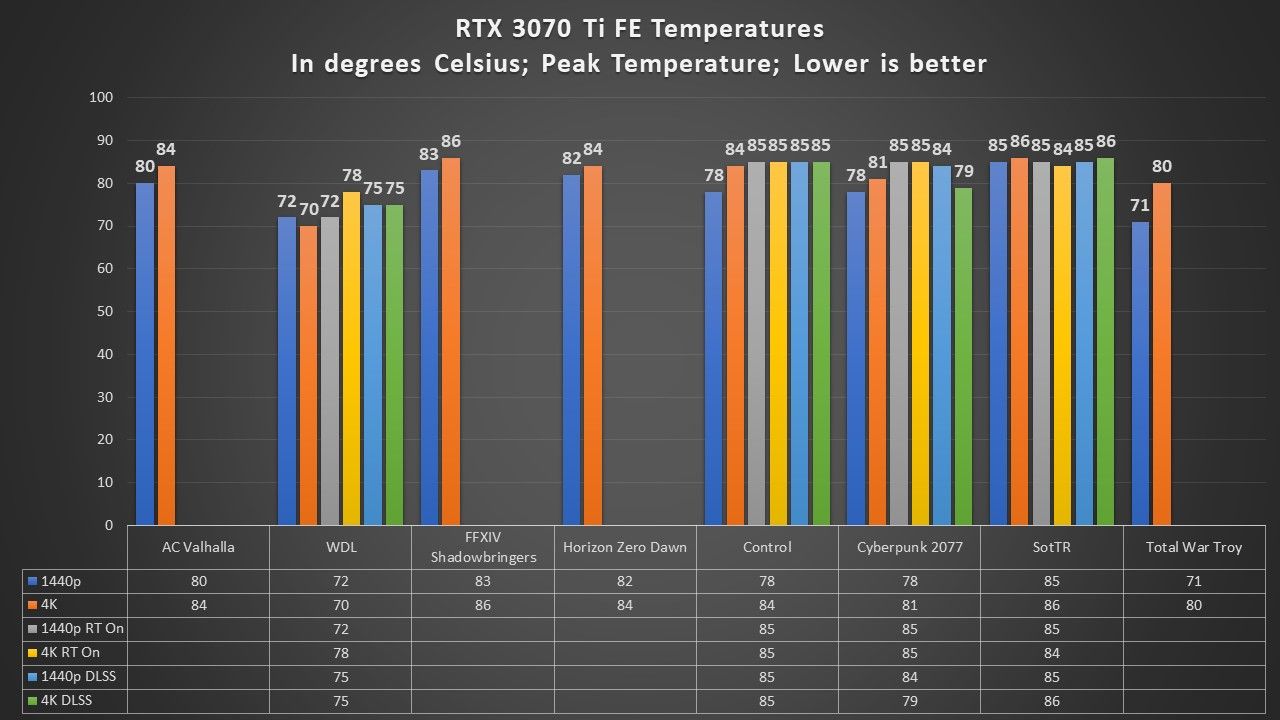 Where the results feel a bit muddled is compared to the RTX 3070 itself. Looking at the 3070 and 3070 Ti, the latter in our testing only ran about 5% better on average at 1440p, while 4K performance sat at 6% faster. Where that gap widens is in ray tracing performance with DLSS, with the 3070 Ti seeing better performance to the tune of 10% and 13% increased over 3070.

While more and more games are adding ray tracing support, and even adding DLSS to help eke out extra frames, the value proposition compared to the RTX 3070 feels a bit confusing. Sure, on average, the RTX 3070 Ti is a better card. But at this price range, you’re likely to find the more price conscious consumer. The question to ask is whether or not it’s enough to justify the extra $100 (assuming you find it at MSRP). The current climate of anything silicon right now has to be addressed as well, as there is a very good chance many reading this review looking for a GPU won’t be able to find one at retail price after launch day. 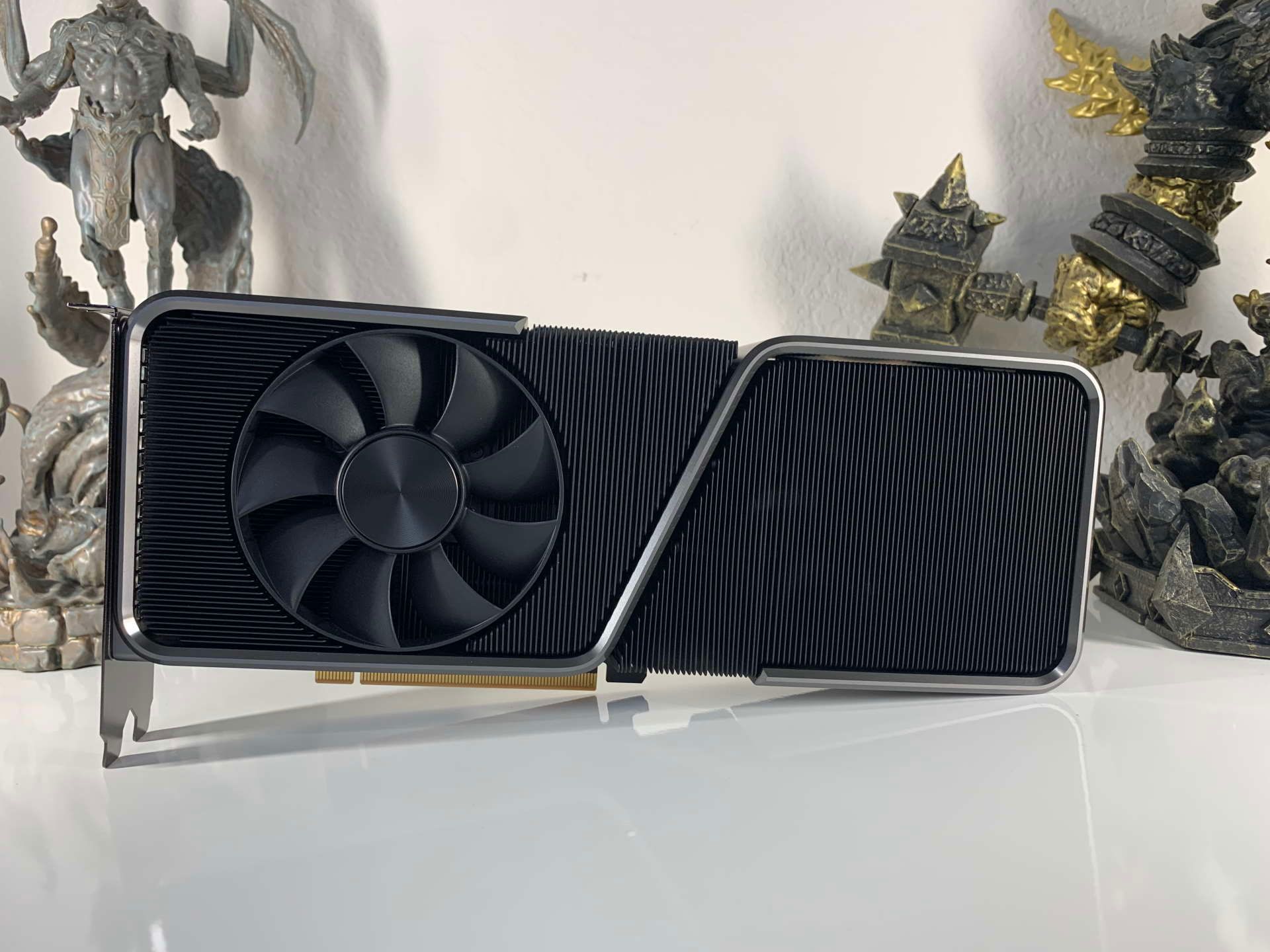 Another problem I see is the 3070 Ti seems positioned to be a launching point for a gen-on-gen upgrade, but with only 8GB of VRAM on the board, even though it’s the better GDDR6X, it could start to feel limiting quickly as more games use higher and higher quality assets. This could mean that those who jump from the 1070 or 2070 to this card could see themselves wanting an upgrade sooner rather than later if those RAM requirements continue to rise. This begs the question: Is it worth holding out on the 3070 Ti, or would that money be better spent going for an RTX 3080 with its better performance and larger pool of VRAM?

Another problem is that right now with the current GPU market, the value proposition isn’t as clear cut as it used to be. Finding cards at MSRP, even from trusted retailers, is going to be hard. This means many potential owners will be looking at the secondary market for marked-up GPUs. While the 3070 Ti will have the hash-rate limiter in place to help deter miners from swooping in and grabbing all of the cards, there is still the very real chance that finding one at MSRP isn’t going to be something most buyers experience.

Looking at the measurements, the RTX 3070 Ti is a good card. However, the question I keep asking myself is whether or not it’s good enough to justify the higher price. If you’re looking at gen-on-gen, it’s an upgrade over the 2070 Super. Compared to the 3070 itself, it’s a bit of a toss up. While it is more performant, it may not be enough to justify the higher price for some consumers . If you’re someone who has a hard budget and can’t afford to step up to the 3080, you’re not going to get a bad card by any stretch. This is assuming you can find one at retail price.