With the launch of Intel’s 13th generation CPUs, new motherboards are making their way to the market hoping to earn your upgrade dollars. Today, we’re looking at a more premium entry with the MSI MPG Z790 Carbon WiFi. Coming in at $479, it’s feature-rich and ready for overclocking but is it worth your upgrade dollars? Find out in this review!

The MSI MPG Z790 Carbon WiFi aims to be the premier platform for enthusiasts running the latest Intel 13th generation processors. Priced at $479, it’s in the upper middle of the current pricing bracket, so while it’s not the cheapest, it offers a mix of features, overclocking capabilities, and slick aesthetics to justify its price.

Starting with the basics of the platform, Z790 brings with it a handful of improvements that make it a better match for modern high-end systems. It supports DDR5 memory up to 5600MHz natively, up from Z690’s 4800MHz (though the MPG Z790 Carbon WiFi supports far faster than that base spec). It also reworks PCIe lanes, delivering 20 PCIe 4.0 lanes and 8 PCIe 3.0 lanes. Compared to the 12/16 arrangement of the former platform, you’ll be able to connect more high speed storage and other PCI Express devices before being throttled to 3.0 speeds.

The changes aren’t major, so the pressure is really on brands like MSI to make their boards worthwhile with custom features and capabilities. In fact, it’s entirely possible to run a 12th generation processor in a Z790 platform and take advantage of these same benefits, so you if you find yourself in the market for a new motherboard, Z790 is still a compelling option if it fits your budget.

MSI’s Z790 certainly works hard to make this a premium entry. It features the premium, three-quarters heatsink typical of high-end motherboards, adding a bit of sleekness to its aesthetic while also improving the thermal performance of its NVMe SSDs. It also features a healthy array of connectivity options, fast DDR5 memory support, solid power delivery for overclocking and an array of options to make overclocking as simple as toggling a preset within Windows, or digging into the BIOS for a high manual O.C. 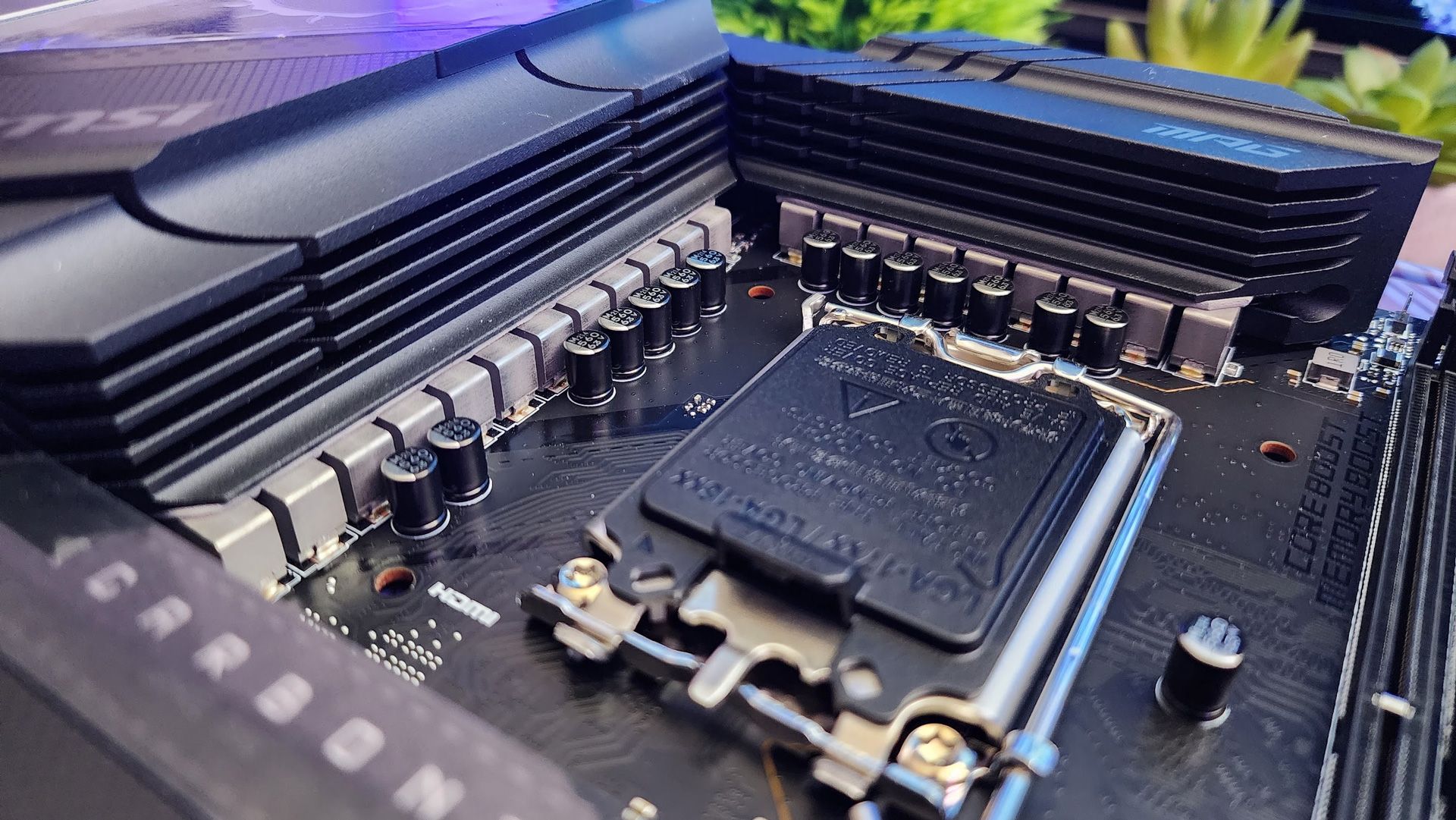 Starting on the technical side, MSI has implemented a 19+1+1 phase power delivery system with this motherboard, rated at 105A. CPU power is delivered with dual 8-pin connectors. A direct touch heat pipe and set of 7W/mK thermal pads draw heat away from the MOSFETs and chokes into an extended heatsink. It’s ready for overclocking if your CPU cooling solution is up to the challenge.

On that front, MSI has also implemented a total of seven fan headers into the board. Five of these are for system fans and are intelligently positioned around the motherboard for clean wiring. There’s also a CPU and PUMP header for your air cooler’s fan of pump head if you’re water cooling.

The overclocking potential doesn’t rest with the CPU. The MSI MPG Z790 Carbon WiFi supports DDR5 memory speeds up to 7600 MHz. This speed comes with some limitations, however:

This essentially means that a system you’ll need to use single-rank memory to achieve the highest speed. A system with two sticks of dual-rank memory would be limited to 6600 MHz. Both are fast and are quite expensive to purchase right now, but it’s a limitation worth keeping in mind if you’re really wanting to push those speeds.

The system also features a whopping five M.2 slots for NVMe SSDs. Four slots run at PCIe 4.0 x4 speeds while the second larger slot is rated for PCIe 5.0. There are also six SATA slots, but be aware that the final M.2 slot shares lanes with these, so you’ll want to position your SATA SSDs and HDDs according to the manual. 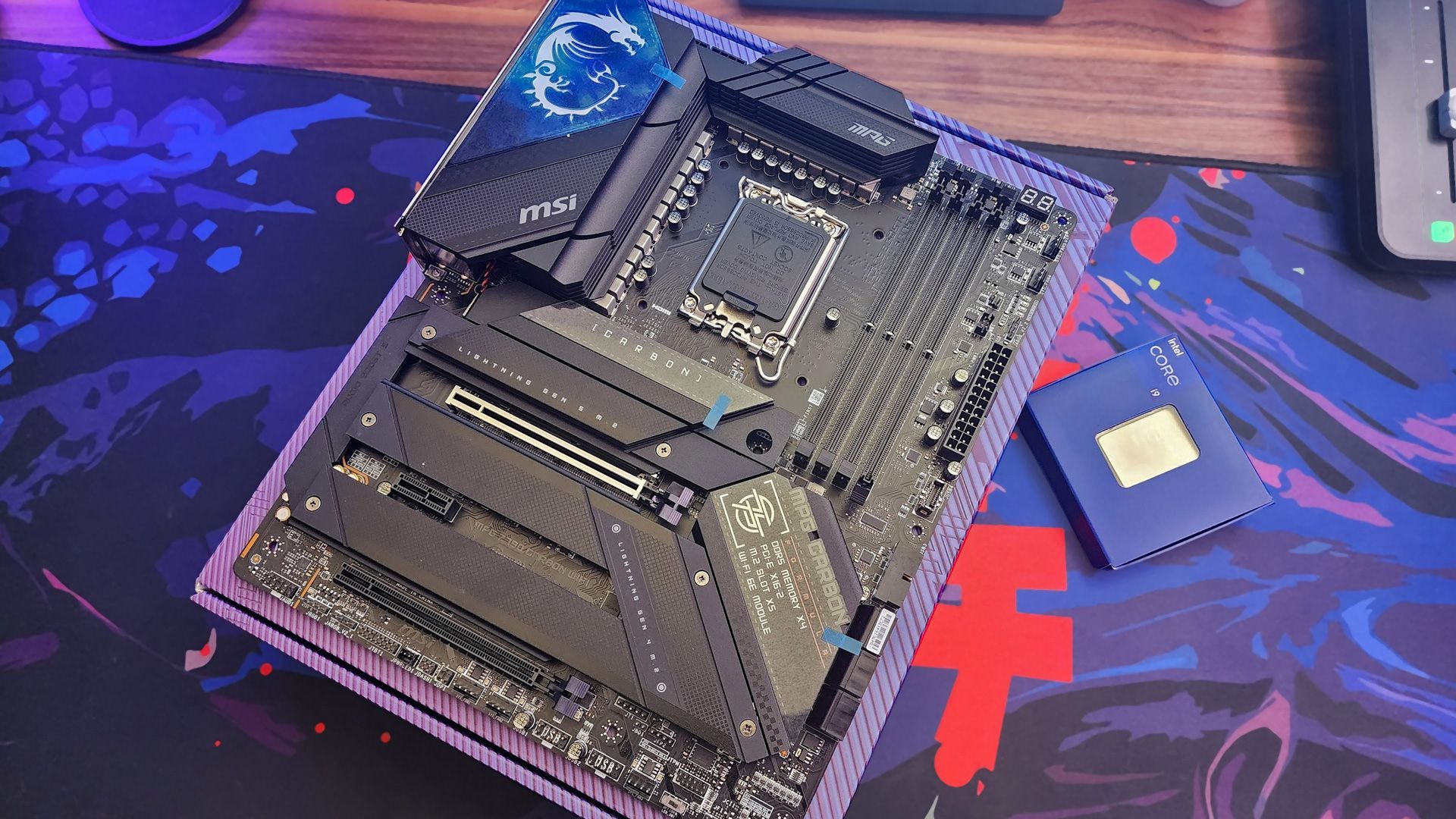 For gaming audio, music, and movies, the board uses an ALC4080 audio processor capable of 32-bit/384kHz. It’s not quite as high quality as the ESS DACs we’ve seen on other boards, but it delivers high quality audio that’s free from interference. MSI has gone the extra mile to source audio specific capacitors and to build in special shielding to keep the audio signal clean, which is great to see.

For networking, the board supports 2.5GB LAN and WiFi 6E. It comes with a built-in magnetic antenna that can be positioned for a clear signal and reliable download speeds. It’s a shame there isn’t support for 10GbE but that’s a feature reserved for higher up the chain. It does come with Bluetooth 5.3 support, however, and I actually found it to work much more reliably than my former system, so they’ve clearly done some work with amplifying the signal. 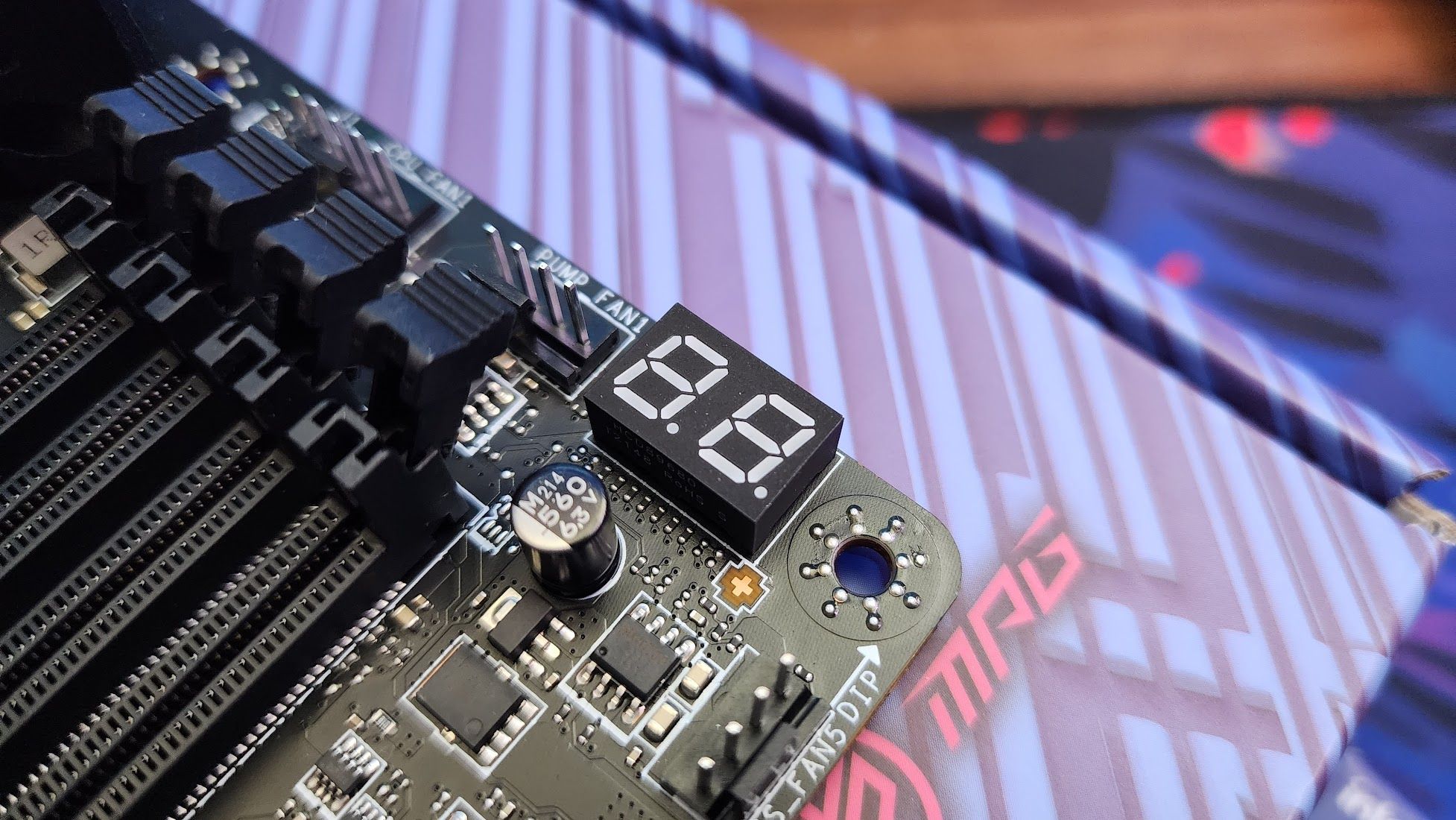 There are also a number of quality of life features that I really appreciated with the board. It comes with a debug LED readout that is incredibly useful. As the system boots, it displays a series of codes that line up with what’s occurring at that moment, even if you don’t have video out to your PC. If there are any problems, the code will point you toward the source of the error. This is a feature that I refused to buy a motherboard without, so it’s great ot see it included here.

I also appreciate the easy clip-in system MSI uses for its M.2 drives. If you’ve ever installed one of these drives, than you already know how frustrating those tiny retention screws can be. Here, you don’t even need a screwdriver. After pressing the drives into place, you simply turn a plastic tab to lock it in place. Then, the heatsink snaps in place over it with a small metal latch. Easy as punch.

And, as a fan of RGB lighting, I love the tasteful RGB MSI has implemented here. It’s just the dragon logo, nothing too overdone, but it provides a nice visual accent that looks great inside of a tempered glass case. 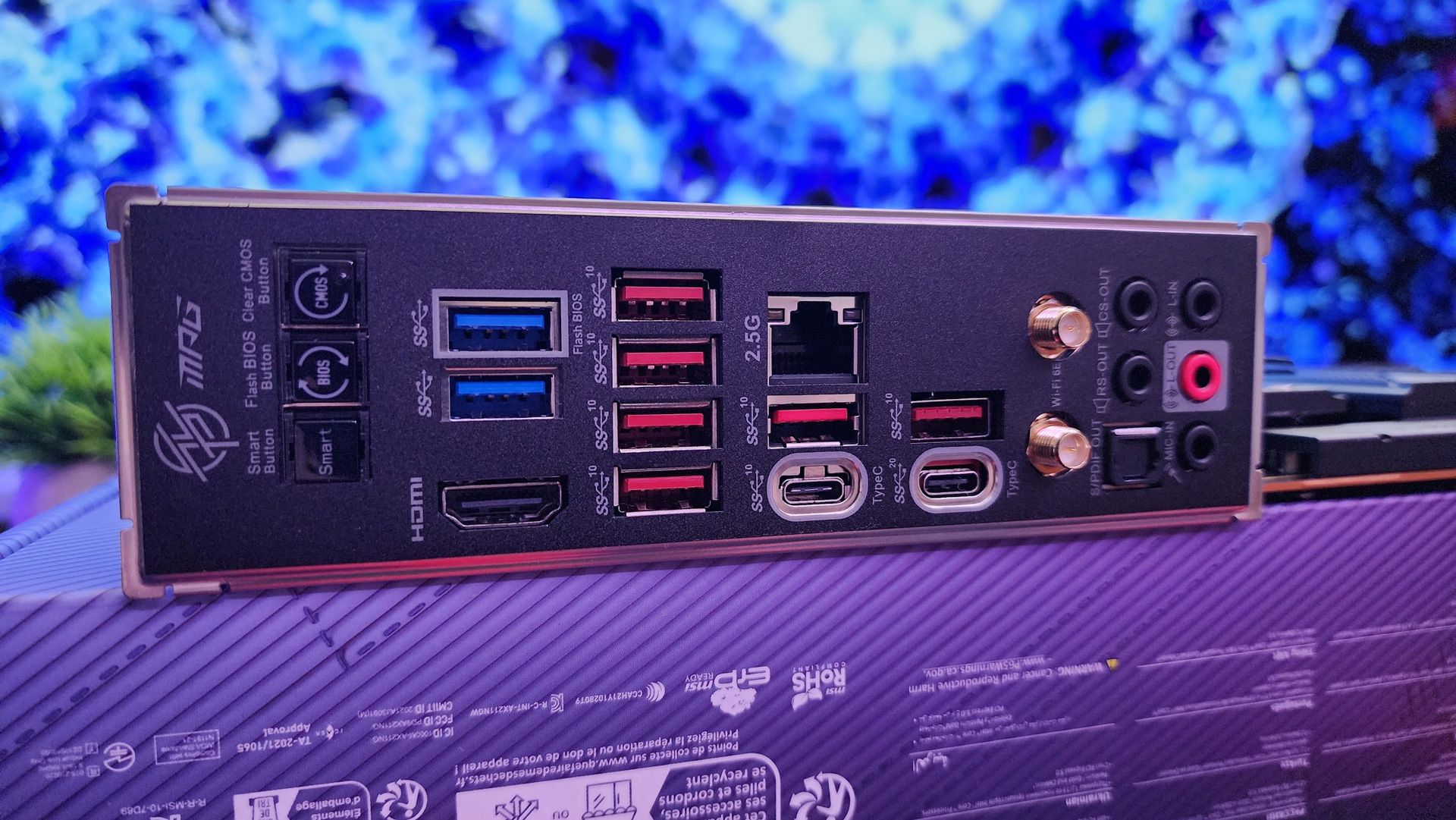 The Smart Button is a unique feature that’s genuinely cool. Using the BIOS, this button can be programmed to reset the PC, restart in Safe Mode, turn case lighting on or off, or set all of the fans to their highest speed.

MSI makes overclocking on this board as easy or in-depth as you would like it to be. For newcomers, you can simply use the Game Boost settings within the MSI Center software. I’ve found that these one-click options tend to lose out on some potential while also generating quite a bit of extra heat — something the 13900K really can’t afford. So, it’s probably best to use the BIOS if you’re comfortable doing so.

Inside, there are plentiful options to adjust the P-Core and E-Core multipliers, ratios, and multipliers. It also offers load line calibration to ensure your processor receives consistent, stable power.

For this review, I found that my 13900K sample already struggled to maintain its thermal limits so was unable to push it further without extending beyond the realms of comfort. But, should you opt for a custom water cooling solution or hit the silicon lottery, these options are plentiful and readily available within the system BIOS.

With features and overview out of the way, let’s get into how the motherboard performed in benchmark testing.

If you saw the first part of our review in progress for the Intel Core i9-13900K, then you’ve already had a sneak peak at gaming performance with this motherboard. Since I also had a Z690 Carbon WiFi on hand, as well as a 12900K, I decided to test it against the last generation board and to throw in the results using that board with a 12th gen CPU. Intel doesn’t expect there to be performance uplift in games and applications between Z690 and Z790, but I thought it would be interesting to show what the generational uplift is between the two models and CPUs. 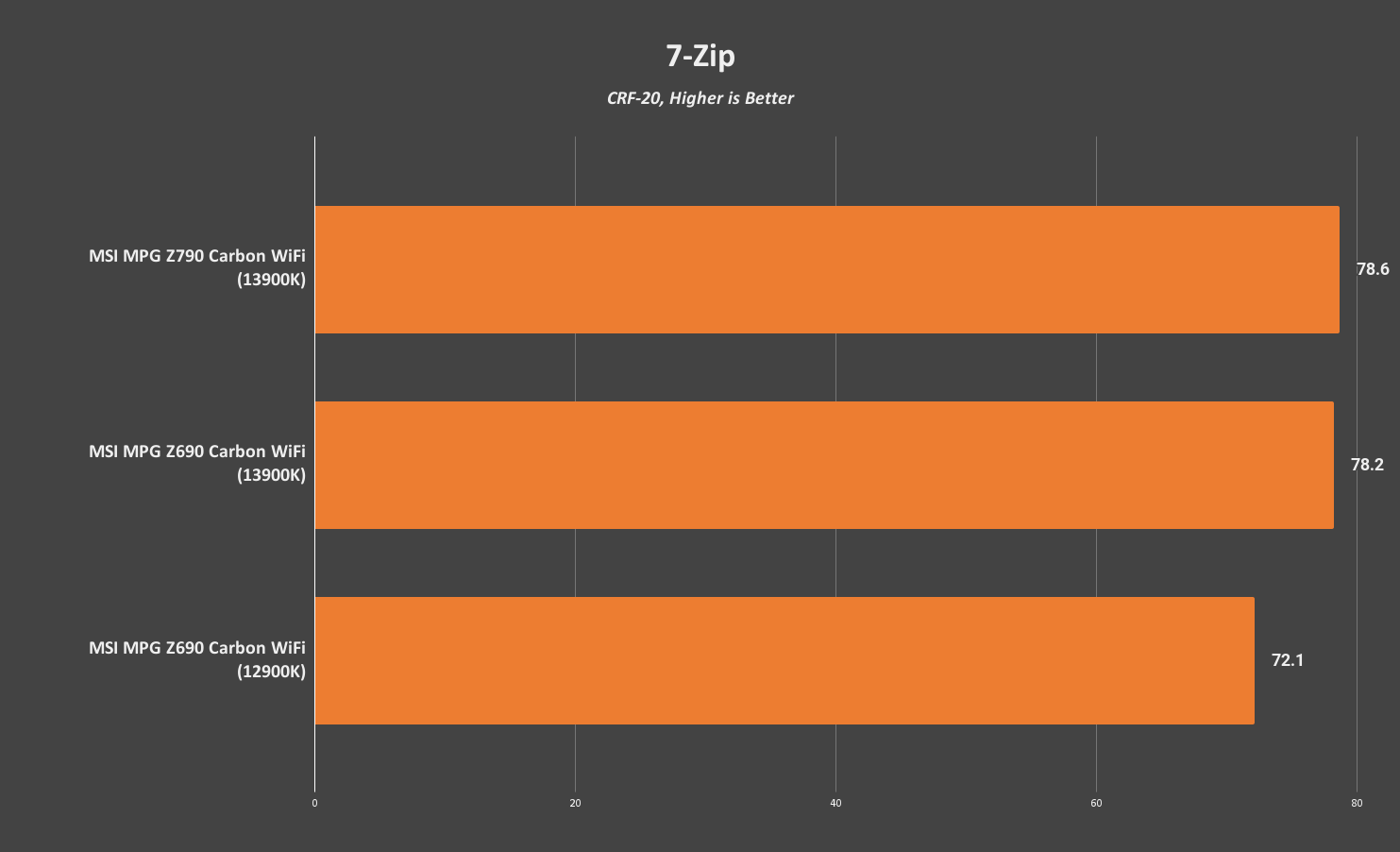 The MSI MPG Z790 is a very good motherboard if you’re looking to build on the Z790 platform. It’s expensive, but offers features like a PCIe 5.0 M.2 storage and DDR5 memory support, which is fairly consistently expensive at this point. If you don’t care about that, or the additional PCIe lanes and faster storage the new platform prodives, you may find that sticking with Z690 (and saving a bit more than $100) is a better choice. For the Z790, though, it offers some great advantages for building a high performance gaming PC.