Intel’s 12th generation is upon us, and with the move to the LGA1700 socket, we now have a new series of motherboards to support its latest and greatest features. Support for DDR5 memory and PCIe 5.0 are just two highlights. Kicking off our coverage of the new platform, we have the MSI MPG Z690 Carbon WiFi. Coming in at $399, it doesn’t come cheap but offers solid performance, overclocking options, and aesthetics for the cost of entry.

MSI’s Carbon series has always struck a middle ground between price and performance, but with this latest release, it definitely seems to be stepping up as one of MSI’s premiere options for enthusiasts. This is especially true for users who plan on overclocking (assuming you have a chip that supports it) thanks to its excellent power delivery system (more on that later). 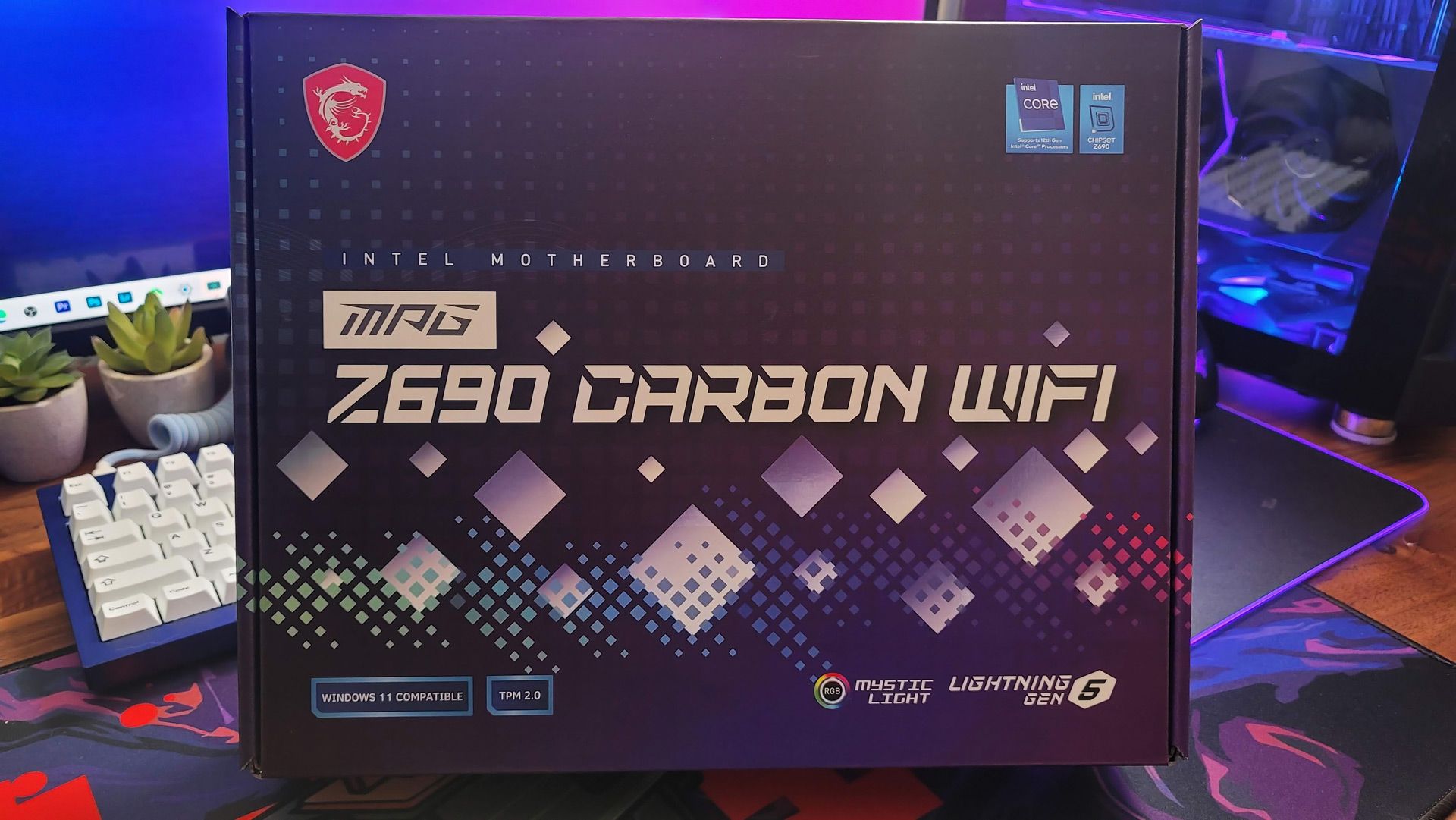 The Z690 Carbon WiFi is one of MSI’s launch motherboards and comes equipped with a rich feature set, plenty of I/O, and enough connectivity for even thorough power users. What it won’t have is advanced support for extreme overclocking but at its midrange price of $399, that’s understandable, expected, and not something most users will attempt anyway. It features a sleek, RGB-enabled design that should work well in most PC cases (unless you’re going for a white theme as our own Damien Gula enjoys). 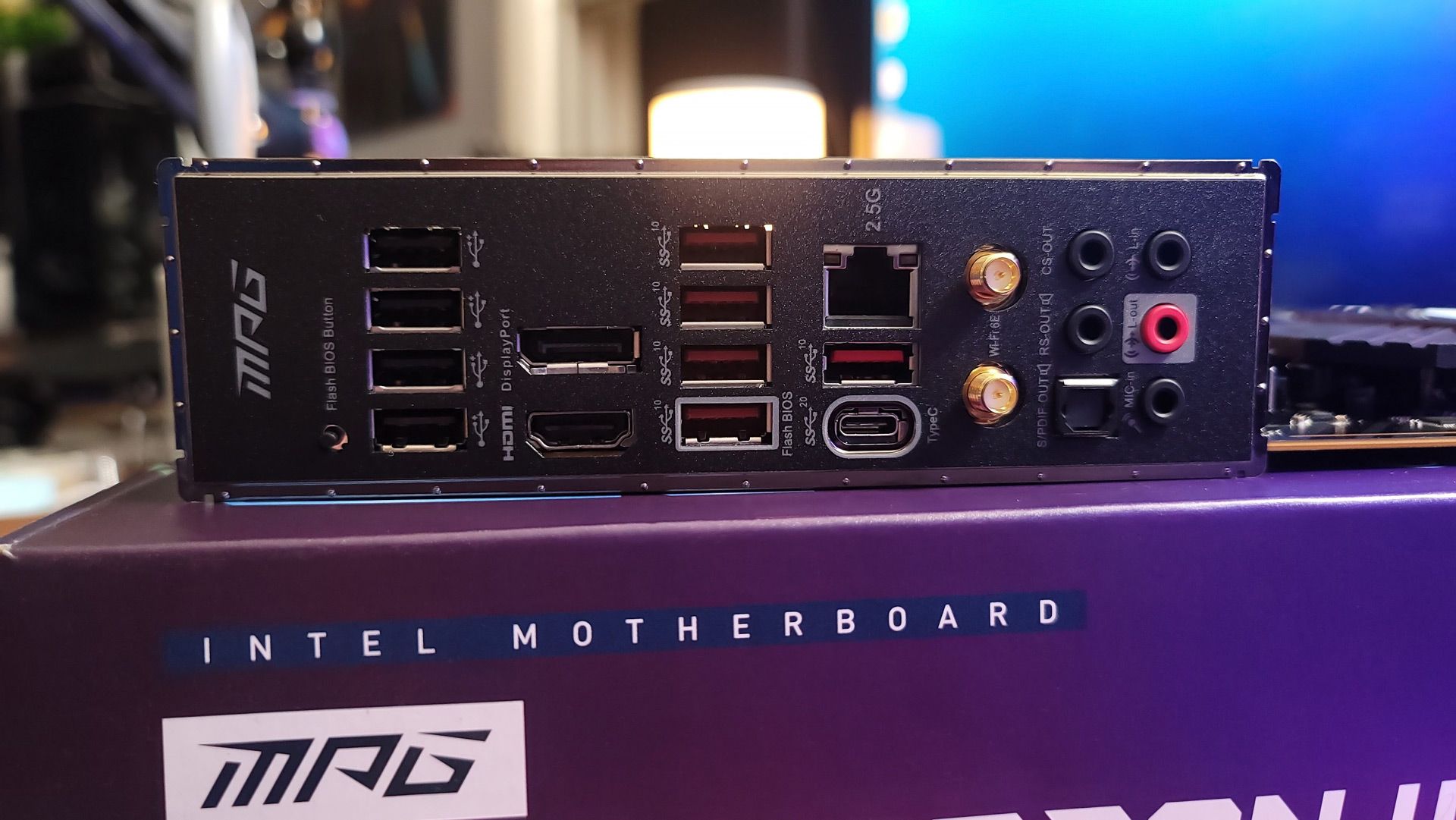 Moving to the internals of the board, it offers support for the latest DDR5 memory but does not support DDR4. As such, we do not recommend purchasing this board if you do not have a support DDR5 memory kit. If you do, however,  the Carbon is able to support overclocked speeds up to 6666 MHz. These kits are expensive but can offer a serious boost to in-game frame rates.

The board makes good use of its PCIe lanes. Z690 supports 20 PCIe 5.0 lanes, 16 of which are reserved for the graphics card and four for PCIe Gen 5 storage (also compatible with Gen 4 drives). The chipset then adds another 12 lanes for PCIe Gen 4 NVMe drives. To accommodate this, the Carbon WiFi offers five M.2 slots and three PCIe x16 slots (two steel reinforced). For slower SATA-based storage, there are also six SATA slots.

When it comes to overclocking, few things are as important as stable, clean power delivery. To accommodate this, the board supports an 18+1+1 phase power delivery system. Power components are also passively cooled with meaty heatsinks and thermal pads to dissipate heat. The CPU is also powered by dual 8-pin connections for stable, plentiful power delivery.

The BIOS is replete with options to dial in exact overclocks, just as we’ve seen with past models. If diving into the BIOS is too intimidating, it also supports one-click overclocking using the MSI Center software. The Carbon series provides an excellent middle-ground in price to performance in this regard. 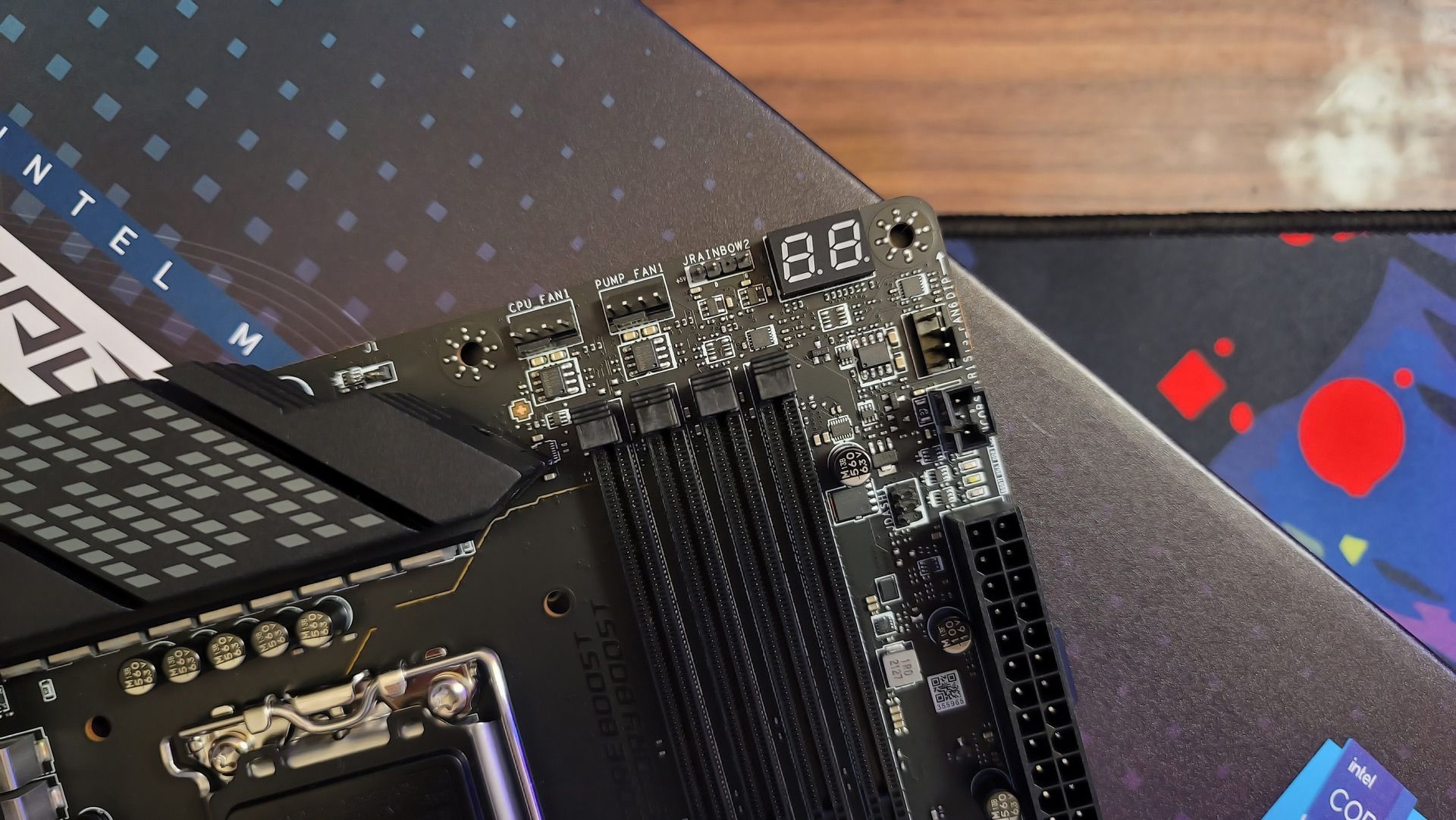 I also have to call out one of my favorite features — so much so, in fact, I won’t buy another motherboard without it: the debug LED. This small readout displays status codes, so if your system is failing to boot, you can pinpoint exactly which component is causing the trouble. It’s an extremely useful feature, especially if you’re an inexperienced builder. 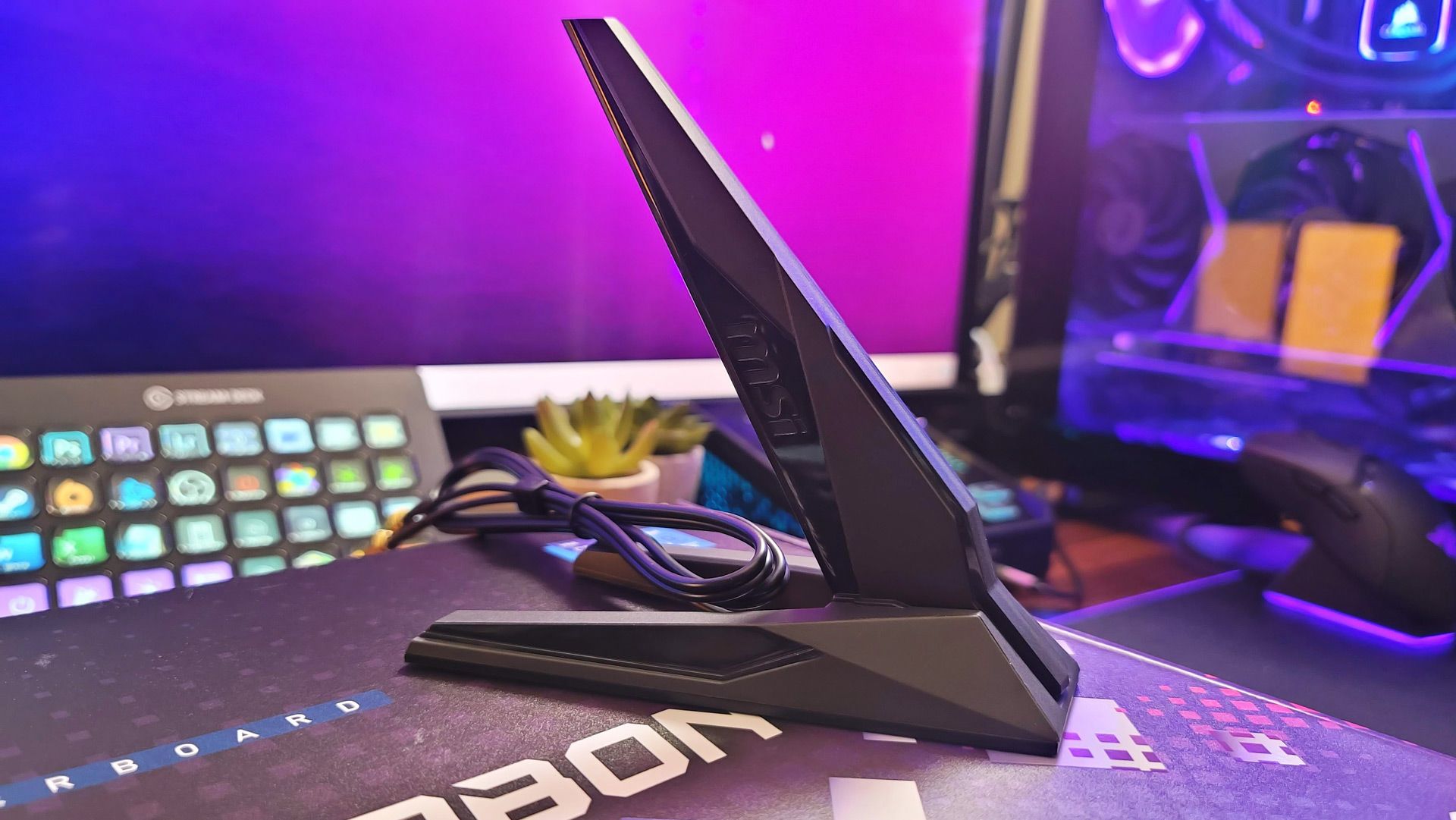 When it comes to networking, you can count on excellent speeds. Wired LAN is 2.5G and supports 10Mbps, 100Mbps, 1Gbps, and 2.5 Gbps. For WiFi, the board supports the latest WiFi 6E protocol, which is theoretically even faster. You’ll need a supporting router and a direct line of sight (in addition to a top tier internet plan) to max out that connection, but you won’t need to sacrifice speed if you’re unable to run an ethernet cable directly to your PC. The Carbon also comes with a large-and-in-charge WiFi antenna to improve reliability.

Finally, we have aesthetics. In keeping with the Carbon name, the board is decked out in Carbon Fiber trim. It looks great but is a fingerprint magnet, so you’ll need to wipe it down once you’re through. It’s also RGB enabled with a “Carbon” logo over the chipset and MSI’s Dragon logo over the I/O panel/heatsink. It looks great without being overstated, though if you’re using a large GPU, the Carbon logo will be blocked.

Since the MSI Z690 Carbon WiFi is the first motherboard we’re testing this generation, we won’t have the usual array of competing products to chart against. Instead, I’ll be positioning it against some of our leading motherboards and processors from last generation, including the Core i9-11900K and AMD Ryzen 9 5950X loaded into the ASUS Z490 Maximus XII Extreme and Gigabyte X570 AORUS Master respectively. These charts will be expanded as we receive more samples to test and gather data for. 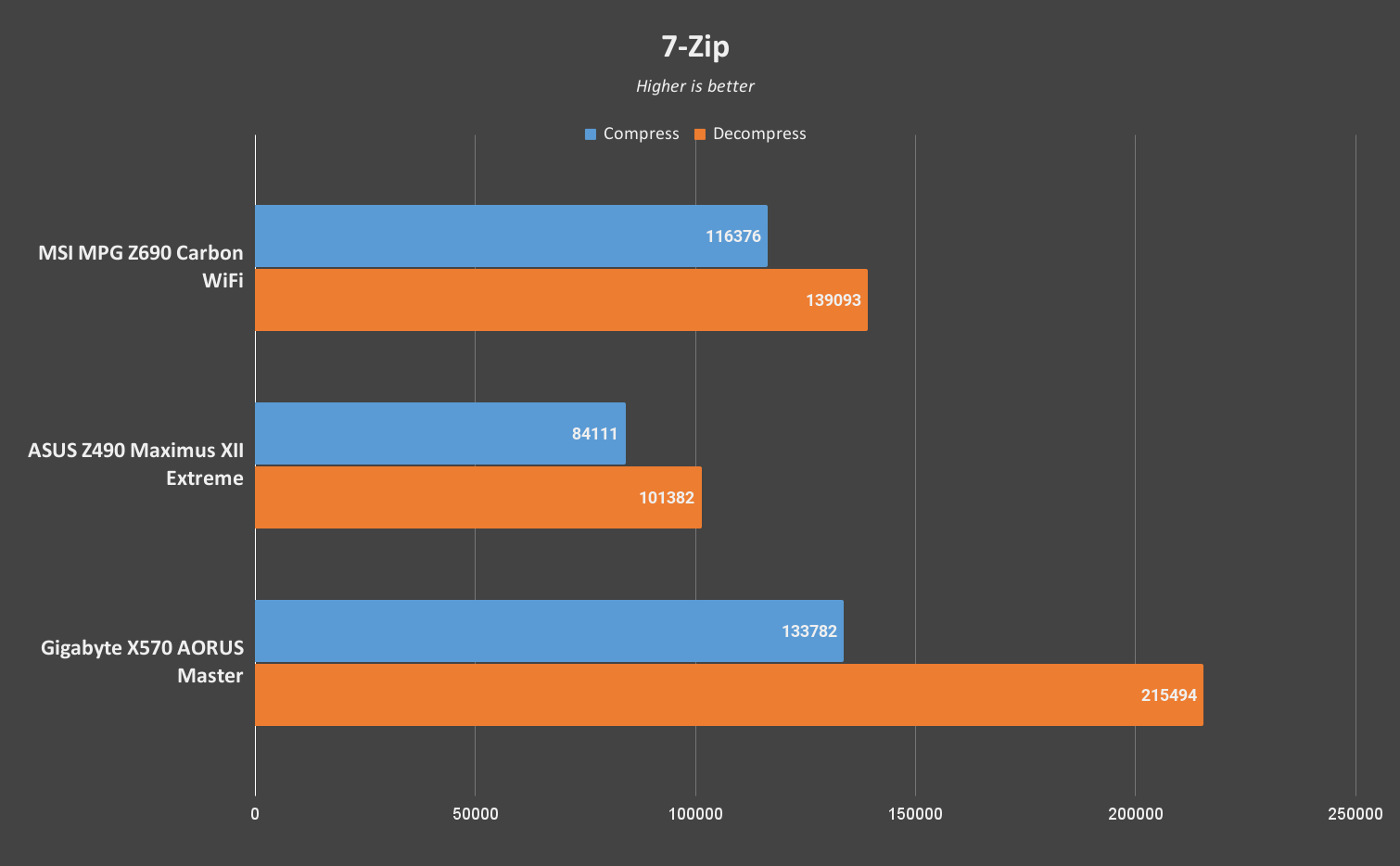 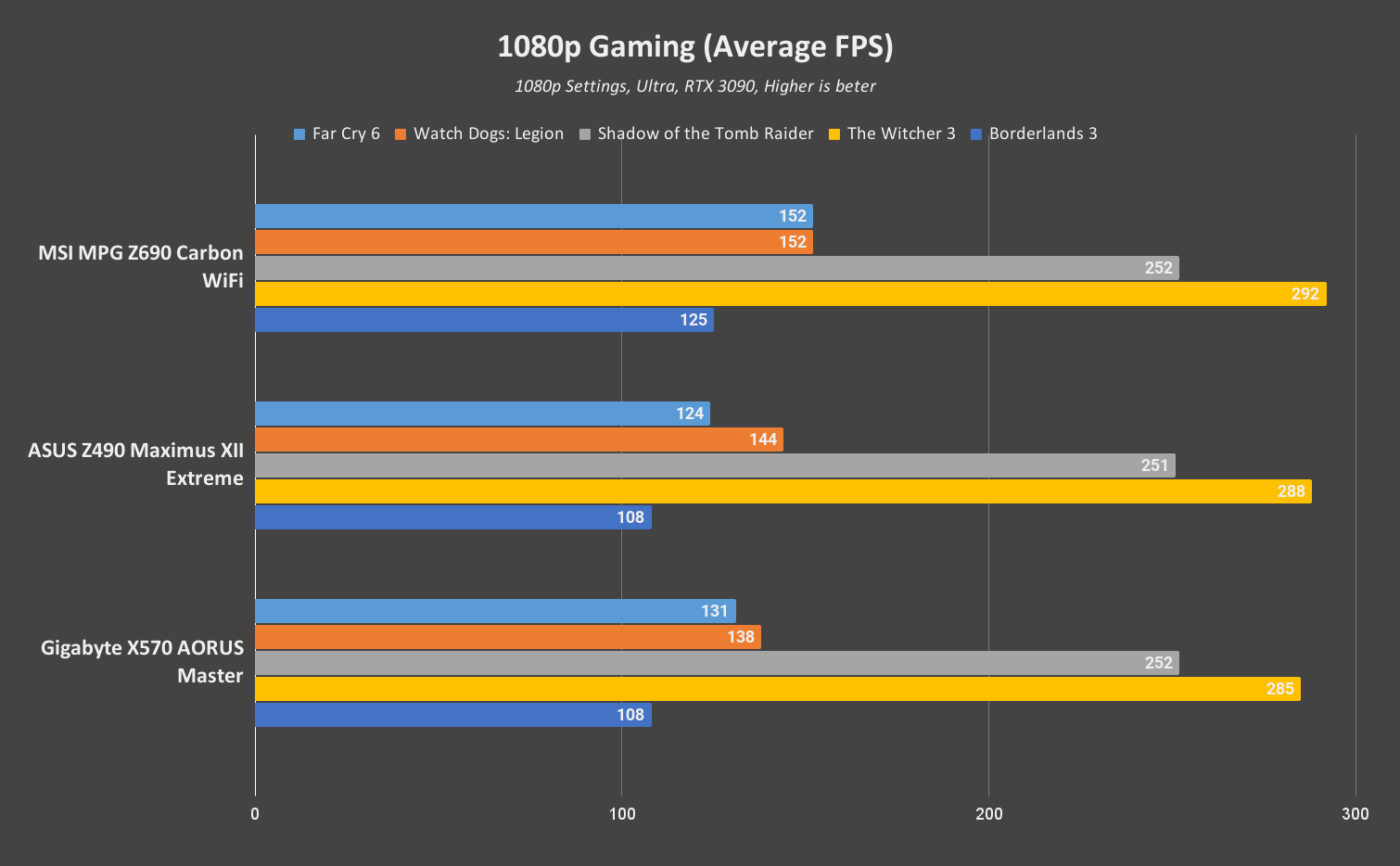 Overclocking support on the MSI Z690 Carbon is plentiful. The BIOS is filled with options to tweak voltage levels. For memory, you can, of course, simply choose your preferred XMP profile and call it a day, but the BIOS also makes it easy to dive in and adjust individual timings and parameters to push your kit even further.

In my review of the 12900K and 12600K, I mentioned using Intel’s own utility to dial in overclocks. For this review, I reset everything to its default settings and worked within the BIOS to overclock each cheap. My results were no different than before, but it’s worth mentioning that MSI’s BIOS are some of the most intuitive and easy to work with of the major brands. I would still give the edge to ASUS in total control, but MSI feels more user friendly to me.

Since the results were the same, this is what I wrote at the time for overclocking both the 12900K and 12600K:

For the 12900K, I was able to achieve a stable overclock of 5.3GHz on the Performance cores at 1.4v. Surprisingly, I was able to accomplish this using Intel’s own tuning utility; it’s made a lot of progress and, while enthusiasts will almost certainly feel more confident working in the BIOS, I wanted to see what was possible and was happy with the growth. Now for the bad news. Achieving that overclock lead to the processor running at 93-95C while gaming. While benchmarking, it hit 100C quite quickly which forced the CPU to throttle itself back down. This is far too hot for comfort and I cannot recommend people overclock with these temperature results. The standard boost behavior is effective at achieving class-leading FPS as it stands, so most gamers will be best suited leaving it alone.

The Core i5-12600K fared much better in terms of temperatures. In the same Aida64 stress test, it only hit a peak temperature of 66 degrees. While gaming, it hovered closer to 53 degrees. Not bad at all! Because of this, I was able to achieve a stable overclock of 5.1GHz at 1.39v. Temperatures here peaked at 85C.

The other thing to be aware of is that overclocking on these CPUs, and subsequently removing their power limits, draws tremendous power. The Core i9-12900K drew an incredible 442 watts at 5.3 GHz. The Core i5-12600K is less but still massive: 323 watts! On stock settings, they run near-consistently at their maximum turbo power draw. These processors are capable of excellent performance but they’re far less efficient than AMD’s Ryzen 5000 series.

At $399, the MSI MPG Z690 Carbon WiFi doesn’t come cheap. What you get for that money is impressive, however, with excellent overclocking support, DDR5, extra M.2 NVMe ports, expanded connectivity, and ultra-fast networking. If you’re building or upgrading a PC and want a baseline that is ready to grow with you into the future, and don’t mind paying a bit extra for it, this is a great buy.