Originally a Kickstarter Project, the MOVO WebMic HD Pro was funded in just two hours. Designed for the ground-up with content creators in mind, this webcam comes equipped with its own stand which doubles as a handle for vlog-style content. Also included is a built-in Cardioid mic with adjustable gain and monitoring as well as the aforementioned ring light. It’s a webcam packed with potential.

After two weeks of testing, it’s time to see if this all-in-one webcam can hold up to all a content creator can throw at it. So without further ado here is our review of the MOVO WebMic HD Pro from MOVO.

The MOVO WebMic HD Pro is one of the most unique designs I’ve ever come across in a webcam. Although to be fair to the design, it’s much more than a simple webcam. The Camera itself is nestled dead center of the unit with the Cardioid mic surrounding it on all sides. A small golden ring surrounds the camera drawing the eye in naturally as a point of focus. This gold ring is contrasted nicely by a glossy black metal grill that protects the microphone and doubles as a nice-looking accent. The outer edge of the HD PRO is surrounded by a LED ring light.

The whole webcam looks like a mechanical eye encased in a hard plastic casing propped up on a unique-looking modular stand. The plastic casing feels a bit cheap when compared to the nice metal grill and even the included stand but feels solid to hold. The one trade-off with the design is that it is rather large to prop up on a monitor when compared to other webcams in its price bracket. This of course is offset by the aforementioned stand but none the less I don’t think I would attach it to a monitor. Even the included monitor bracket feels bulky; sturdy but bulky. It also requires a monitor with a decent-sized bezel to create a proper mounting point. 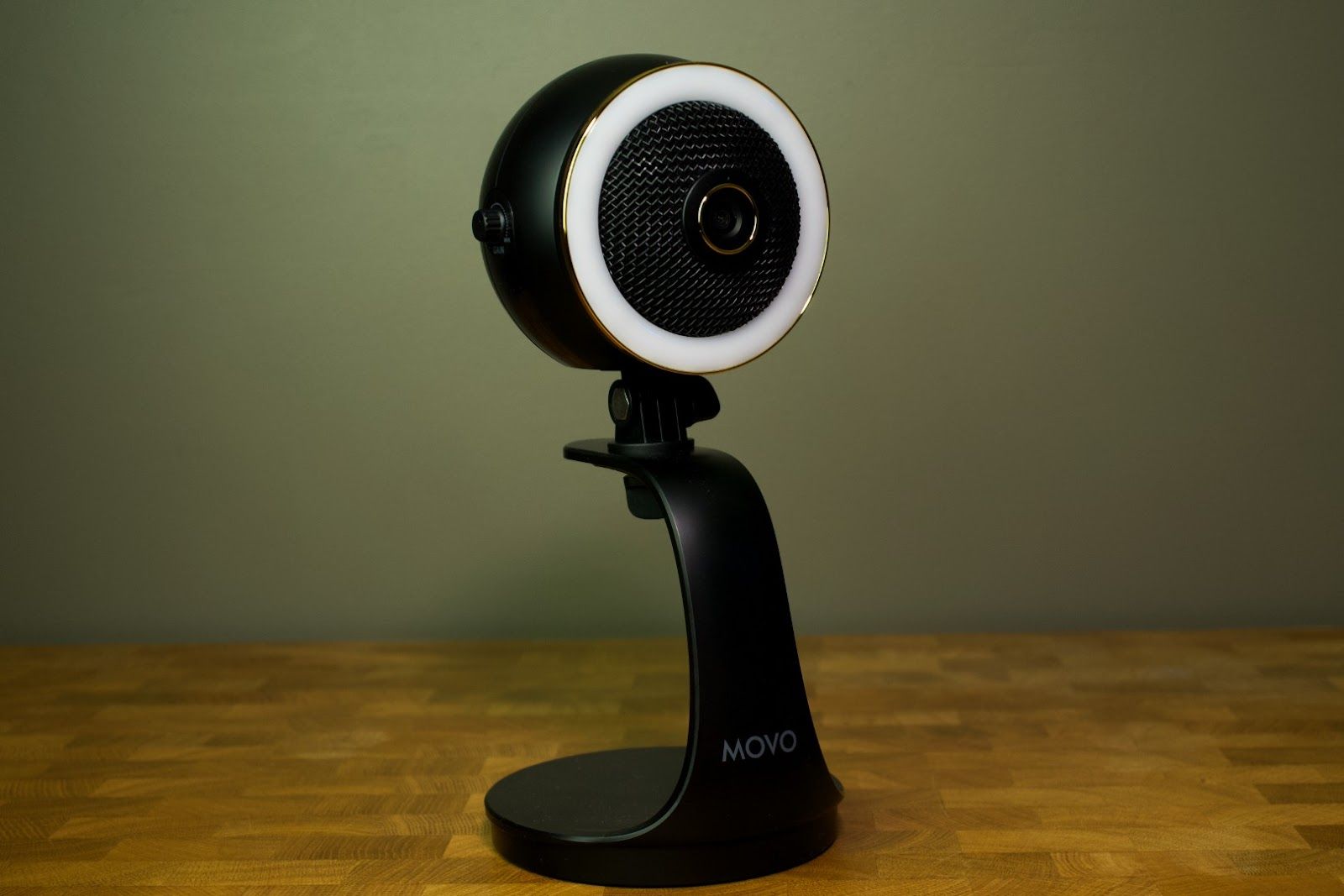 I opted to actually mount it on a small tripod which worked exceptionally well and fits nicely behind my main monitor. Speaking of the stand, this compact little stand actually doubles as a monopod for more vlog-style content if needed. The included USB-C cable does give you some freedom to wander with the camera in tow. The whole package offers a lot of flexibility and adapts well to most setups. This in turn allows creators to really lean into their style and setting. It may look a bit different than most webcams but the functions and features more than make up for its unique look.

As mentioned the WebMic HD Pro has an array of useful features all packed into this single unit. For starters, the included Cardioid polar pattern microphone is a huge upgrade from the standard mics that come in most webcams (even in the $200 dollar price range). A gain control knob located on the side of the unit allows for quick adjustments on the fly. Speaking of adjusting on the fly, the built-in head jack and accompanying volume knob (located opposite the gain control) allows you to monitor while recording. I personally loved this feature as it allows for a much faster response time to gain adjusting which means more time creating and less time fiddling with settings.

The built-in LED light also offers some additional functionality to the capturing process. It allows for quick adjustments to the lighting conditions without having to move out of the frame. A small push button on the back allows you to cycle between off and three levels of brightness. The LEDs are dialed in at 5600k color temperature which will accent any natural daylight coming in from nearby windows. 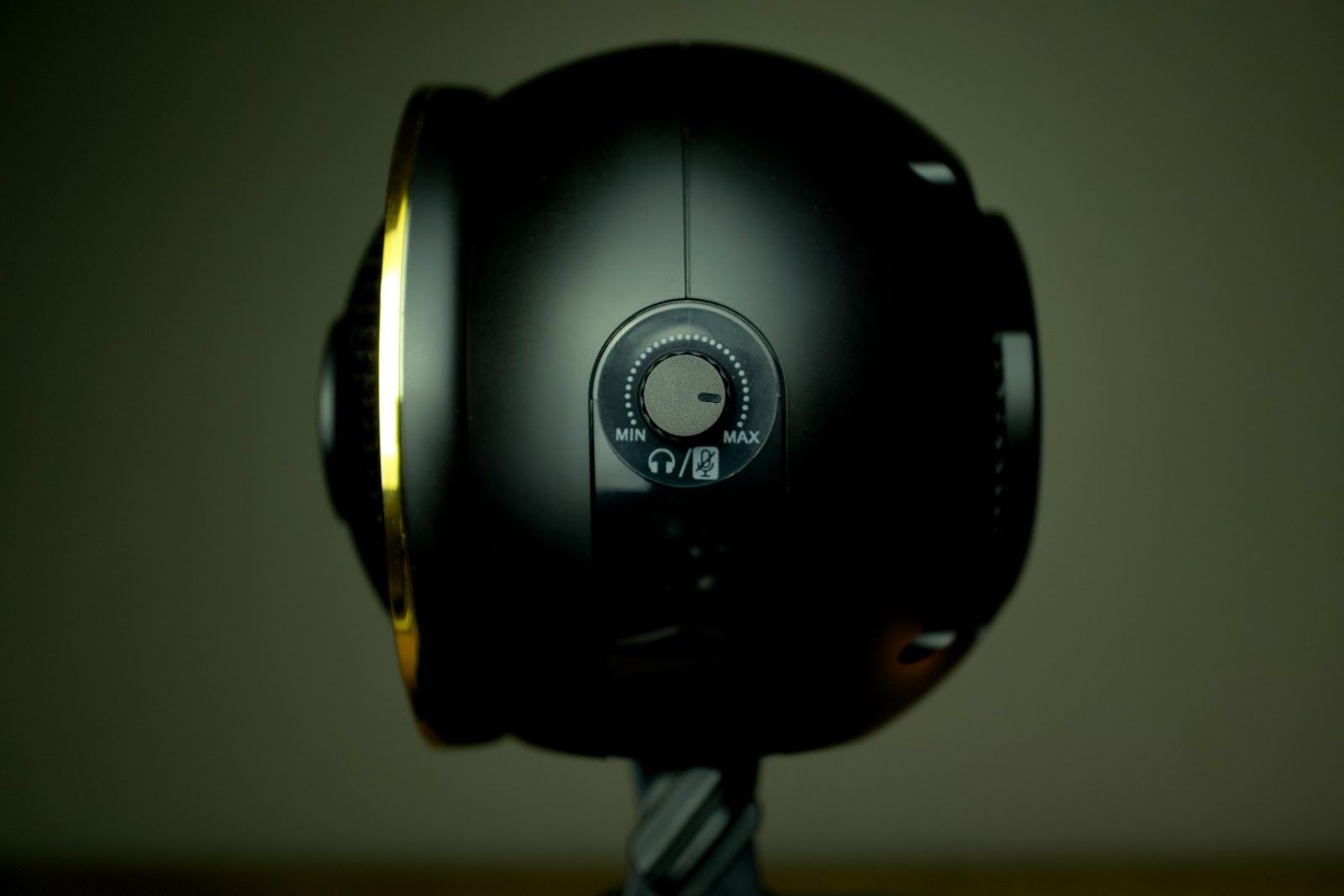 I found the ease of switching lighting conditions to be exceptionally helpful when setting up test shots and was happy with how easy it was to get the unit up and running. In fact, there was no need to install special software to utilize the HD Pro. After plugging it into my computer, OBS quickly picked it up and recognized both the camera and the mic without any additional setup. It truly is a plug-and-play experience.

So on paper, the WebMic HD Pro has it all. Equipped with a 1080p 30FPS camera, Cardioid condenser mic and even a ring light, this is an all-in-one package that makes streaming a simple plug and plays affair. However, after a lot of testing, I have to say that this jack of all trades isn’t quite the master of all I was hoping for.

I ran multiple tests with the camera with mixed results. The testing environment included multiple shots with two different ring lights(the built-in one as well as an external one) and a blue backlight on one side contrasted with a 3000k white backlight on the other side. I took some comparison shots with my Razor Kiyo Pro in various lighting conditions to push the sensor. I also matched the settings as best I could between the two cameras being sure to keep as many settings the same as possible. I turned exposure and color temp on auto as well as pulled the zoom out all the way(at least on the Kiyo Pro; more on FOV later) so as to create similar shot settings.

In well-lit situations, the sensor on the WebMic HD Pro performed fairly well. It wasn’t over the top sharp and crisp but was clean with a small amount of light noise. With good daylight settings and good light, the WebMic HD Pro looks decent.

I also noted that the auto exposure setting really struggled to adjust to brighter lighting settings. In one comparison specifically, you can see a dramatic difference between the Kiyo and the WebMic with the light compensation feature enabled.

It was a bit disappointing really as the WebMic is designed to be a plug-and-play experience. Don’t get me wrong I was able to manually adjust settings to get a clean image but it was just as much of a hassle as it is with any other camera and light setup I use. Even with my adjustments, however, the WebMic sensor just isn’t as powerful as some other Webcams in its weight class.

The final note I have on the camera has to do with the field of view and focus. Unlike many other cameras in its price range, the WebMic HD Pro has a locked FOV meaning you have no option to zoom in or out. In settings where you are working on a laptop and are naturally closer to the screen, this is fine. It also uses fixed-focus, so a field in front of the lens will be crisp and clear, but if you like to hold things up to the camera, you'll find they become blurry when you move too close.

However, in a desktop streaming setting, this can be problematic if you want to have a specific framing to your shot. As is the case with many streamers, tighter angles are typically the preferred shot as it helps reduce the amount of space you need to set up. Additionally, tighter shots mean better control over the lighting without the need for additional lights and rigs. Unfortunately, the WebMic HD Pro falls shot here leaving you with a very fixed angle to work with. 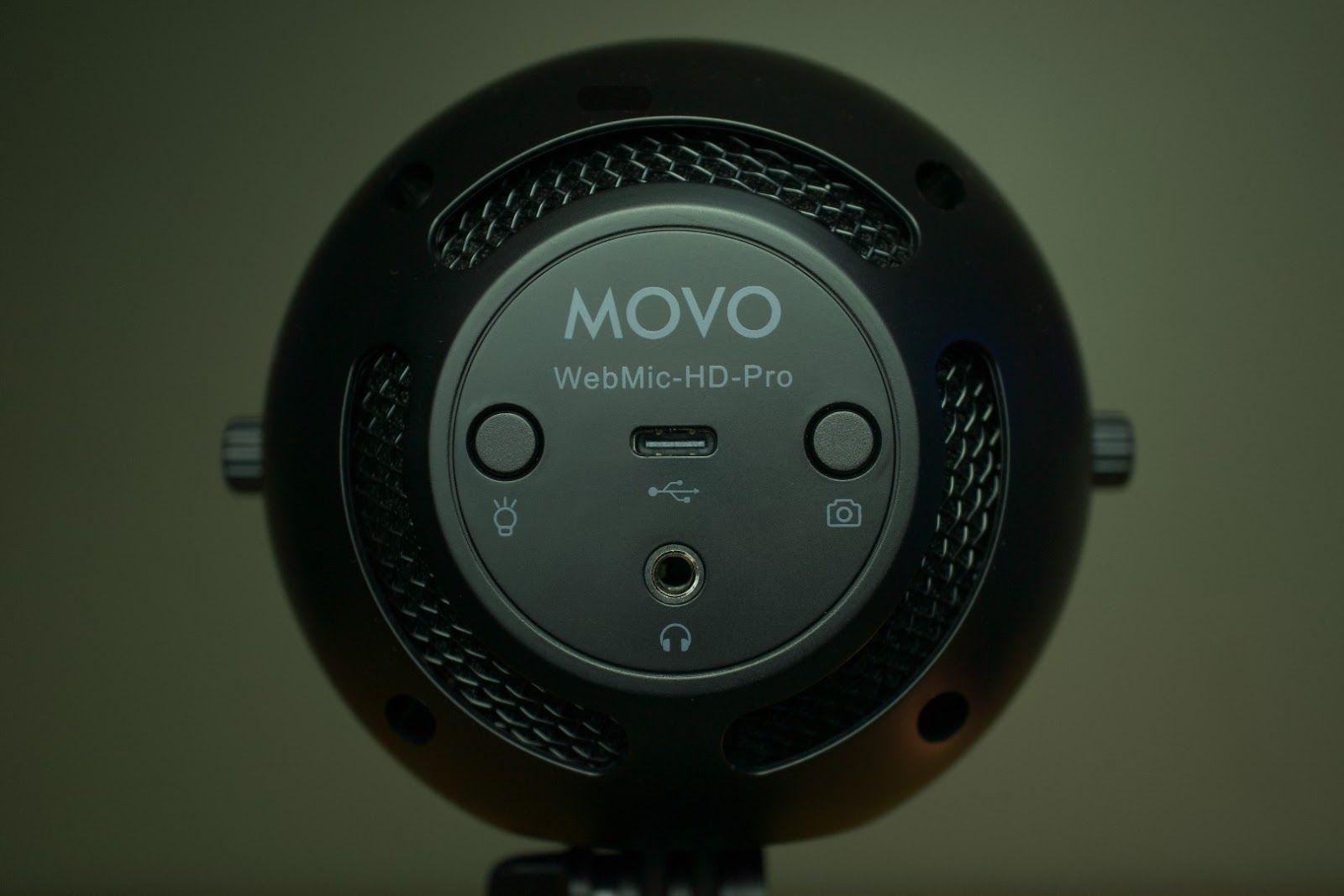 Testing the built-in microphone was a bit more satisfying. Condenser mics by nature are designed to be a bit more of a catch-all for audio. The drawback is that you tend to pick up more background (or room) audio than with a dynamic mic. This is compensated for by having a cardioid polar pattern mic which basically means that pickups in the mic are focused on the front half of the unit. The plus to a condenser mic is that you have much more freedom to move around without losing audio pickup.

In the case of the WebMic HD Pro, this included cardioid condenser is a solid mic. It had no problem picking up my voice at various distances and although it did pick up some background noise I was able to compensate for this with a quick adjustment of the gain control. As one would expect, the closer you can position the mic to your face the less gain you’ll need which in turn translates into less background noise. But even at roughly 20 inches from my face the mic still managed to generate a clean and clear capture of my voice.

Although I traditionally lean towards dynamic mics for recording and capture I was quite impressed with just how powerful and clear this built-in mic is. Throw in the fact that you can monitor your audio while capturing using the included 3.5 mm headphone jack and it’s hands down the easiest and arguably best webcam mics I’ve worked with.

The final tests I ran revolved around the included LED light. As mentioned earlier, it functionally works with the HD Pro but due to the sensor’s poor low light capabilities, it’s just not powerful enough on its own. The built-in low light compensation feature helps compensate for the sensor but I do wonder if a brighter light could have accomplished the same feat but without the visual noise generated by the compensation. Regardless having an onboard ring light goes a long way in helping produce a decent image and it does work for the WebMic HD Pro. 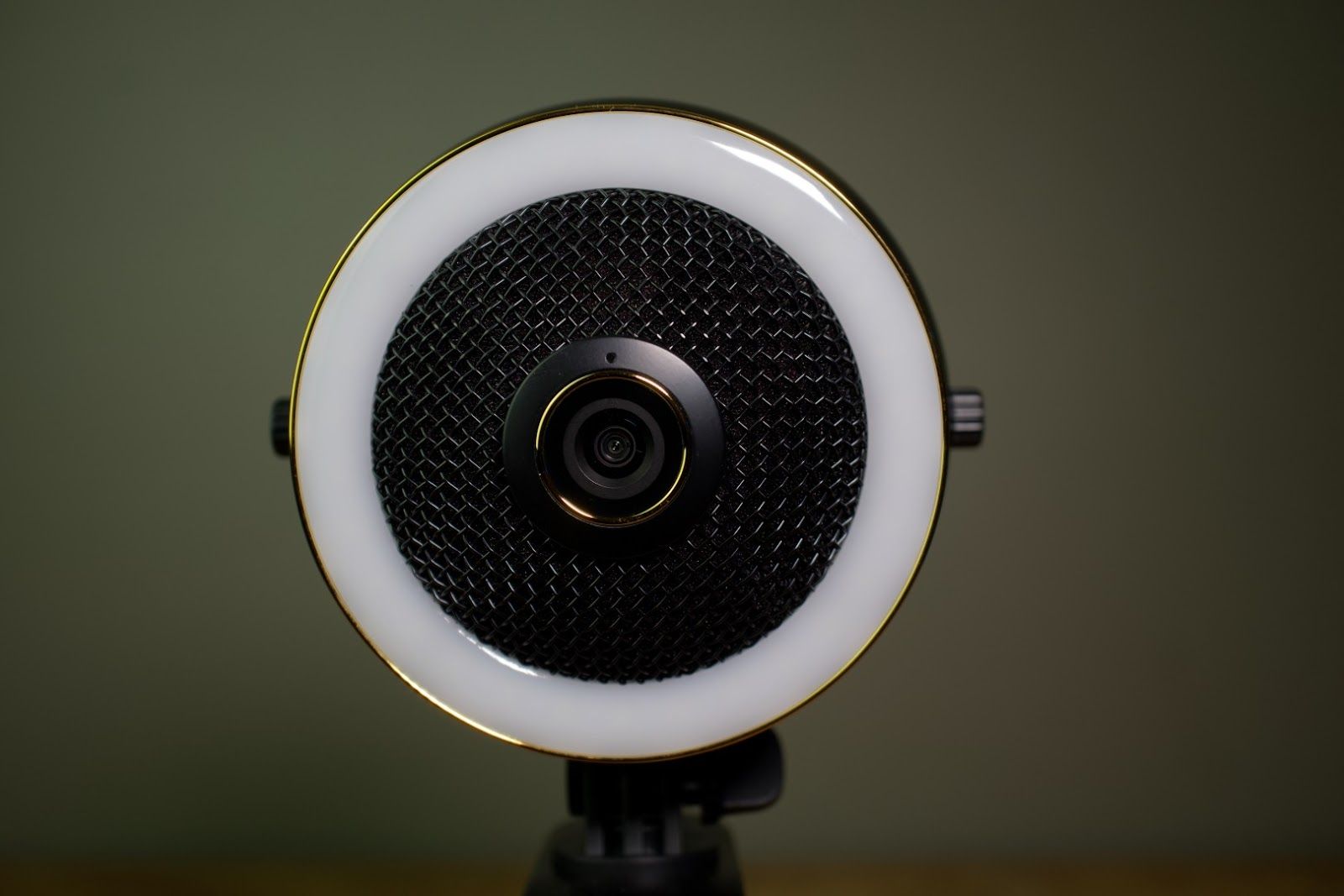 The MOVO WebMic HD Pro works hard to be the ultimate Streaming Device. It doesn’t do it masterfully but it does accomplish its goal; an all-in-one solution for streaming. I can honestly say that if I was on the road this is the solution I would want with me. It’s compact, versatile and adaptable. Despite some shortcomings, namely its weak camera sensor and some rough auto exposure settings, it still manages to get the job done. With the right adjustments and tweaks, it can get it done fairly well. It hasn’t convinced me to swap out my current stream setup but it is a unique and streamlined package for someone building their first stream setup. Coming in at an MSRP of $199.95, the MOVO WebMic HD Pro is a competent all-in-one solution for streaming.