The Movo VSM-7 is an interesting mic for me. At just $124.95, the microphone is relatively inexpensive for XLR Condenser mics. However, while I’ve really enjoyed the sound the mic itself can produce, there are a few issues I encountered with build quality that did have me concerned overall. However, the question remains: do they stop the mic from being a decent entry-level XLR for the money?

When the MOVO VSM-7 arrived at my house, it was actually a panic moment. The box itself was crushed on one side and I was afraid the microphone itself was damaged. In fact, it was one of the worst delivered boxes I’ve ever seen hit my doorstep.

However, I’m pleased to report the packaging MOVO is using held up incredibly well. While one of the cords on the shock mount was broken, the Mic itself worked fine and had no damage done to it. The package itself includes obviously the Movo VSM-7 mic, a pop filter, shock mount, XLR cable and the thread adapter needed to hook it up to a boom arm like my Blue Compass arm.

The all metal design is a nice touch. The microphone feels hefty and it didn’t require too much in the way of adjusting the boom arm spring to find the right balance thanks to how weighty the VSM-7 is, though the AverMedia Live Streamer Mic 330 has it beat there. 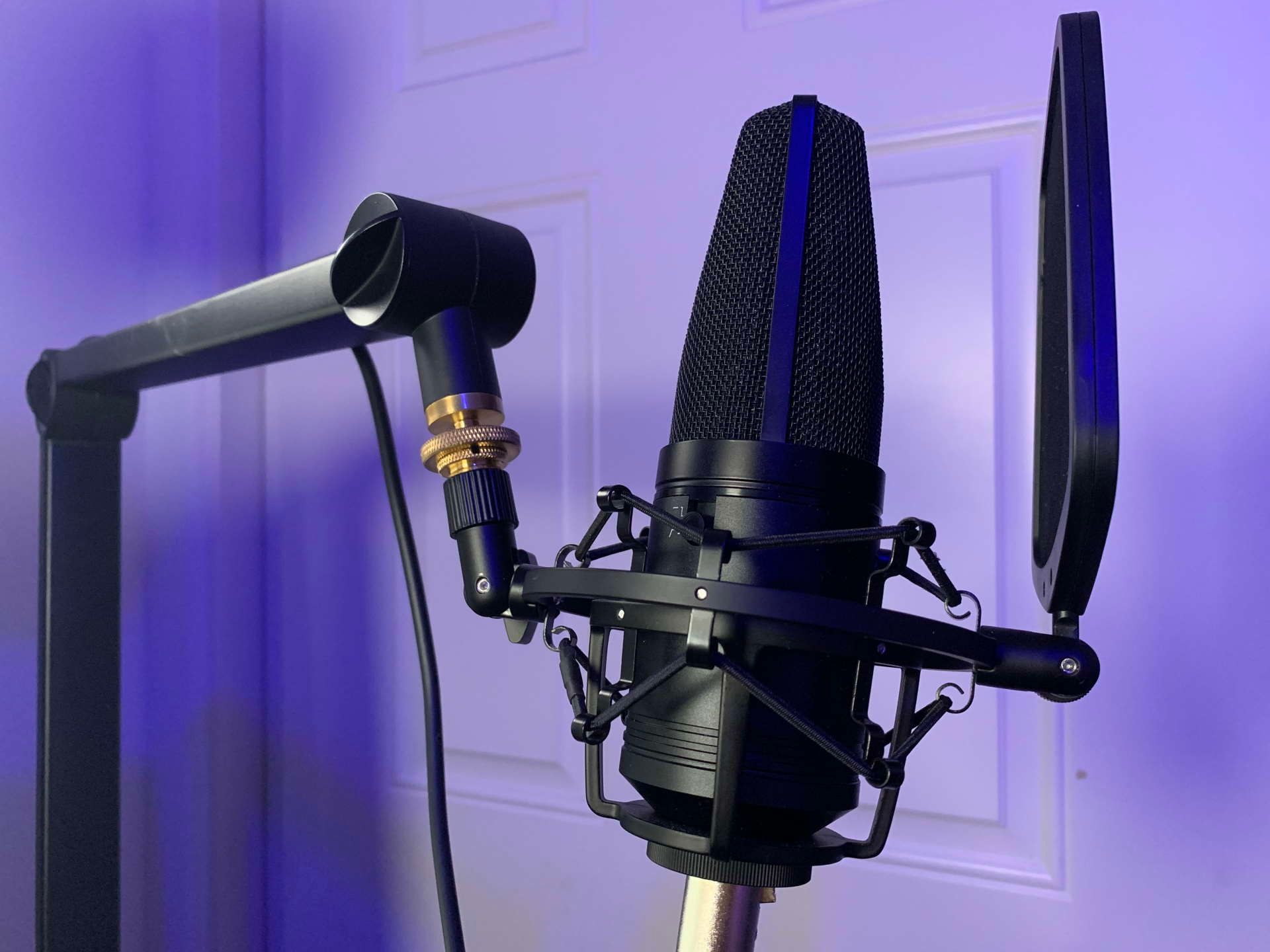 The mic itself looks like your standard studio microphone. However, there are some issues with the build quality that gave me pause.

Remember that issue with the broken shock mount cord? I thought it was only happening because the box had been damaged. However, within a week of use the other cord broke. VSM-7’s package comes with replacement cables, but in all my years using shock mounts I’ve never had one just feel so flimsy. Honestly, if you’re worried about the state of the shock mount itself, you might want to consider an upgrade down the road. I am glad they include one (the aforementioned AverMedia at $99.99 does not, for example, though the Rode PodMic has one built into the mic itself for the same cost), but I just wish it was better.

The microphone itself includes three polar patterns for your recording needs: Cardioid, Omnidirectional and Bidirectional. While in my set up I found myself using Cardioid almost exclusively, I could see how having the other patterns helps with other recording uses, such as a podcast or a studio recording with multiple people. Additionally, the Movo VSM-7 includes a low-cut (high-pass) filter which works well to take out some of the higher frequencies in your recording, like a random AC in the background while streaming during a heat wave.

Being that this is an XLR mic and not a USB, there is no headphone jack in the mic itself to monitor your voice as its assumed you'll be doing that through your mix-amp set up. Additionally, there is no software to download and install as well, as any mixing or changing of your tone will be done through a board itself. It was nice to not have to learn a new program just to use the mic, my existing software took over and gave me the round, radio voice sound I was looking for with ease.

But how does it sound?

Being a condenser mic, the Movo VSM-7 picks up so much more than your average Dynamic microphone. This is where the high-pass filter toggle helps as well, as it can weed out some of those low frequencies to clear up the background, meaning the only part that shines through is your voice. Using the toggle, I didn’t notice a huge difference, but it is there. I typically keep a fan on next to me at my desk (I live in Vegas, even my AC can’t keep up with the heat). In some recordings where I was testing one side of the toggle, the fan was audible, but on the other it was much less noticeable. The low-cut filter was doing its job here.

One nice change versus some of the other XLR mics I've used recently is a lack of pop or hiss when hitting plosives or hissing tones when speaking. The popfilter is doing it's job admirably, and in the hours I've streamed or recorded podcasts since using the VSM-7, I've never had an issue or complaint, whereas my previous XLR it was brought up almost immediately.

The Movo VSM-7 also has a large diaphragm, meaning the microphone has the tendency to capture a much larger range of sound. I noticed compared to my other condenser mics like the HyperX Quadcast S (which uses a small diaphragm) that the sound of the Movo, without any tricks or effects from my mix-amp, sounded fuller, more detailed and had more color to the tone. As such, I felt as though my voice was really the star of any recording I did, whether it was recording a passage for this review, or even during our podcasts and livestreams in the few weeks I’ve had to play with the Movo mic. Compared even to Movo’s UM700, the VSM-7 simply has a richer, fuller sound that can be taken even further thanks to a mix-amp you might have.

The sound quality truly sounds studio as well. I didn’t feel as though anything was lost and I appreciated being able to toggle the dB gain on the mic in conjunction with my mix-amp to find the right balance. Podcasting the mic picks up my voice fine without it needing to be inches away from my face, and as you can see in the Twitch embed below, it definitely kept me in focus even as I moved my head away from the microphone during gameplay.

The Movo VSM-7 is a quality microphone for the money, however it does suffer from one major problem that, when you think of it, is an issue all XLR mics are going to come across: it requires a mix-amp or pre-amp to use on your PC. Unlike a similarly priced USB microphone, the Movo VSM-7 is an XLR interface and requires at 48V of Phantom power to use. You’re going to need the right equipment in order to even begin to use the microphone.

Speaking of equipment, the microphone comes with the filter, shock mount and mounting arm adapter, but it doesn’t come with its own stand, meaning you need to have something already to hold the VSM-7 before use. This isn’t a huge deal if you were already planning on getting into an upgraded audio set up, or you use a boom arm already for a Blue Yeti or similar USB microphone.

If this is your first foray into audio for your PC, I would recommend a quality USB mic over this, such as the Elgato Wave or Blue Yeti. However, if you’re looking to get a fantastic XLR microphone without breaking your bank on just that part of the set-up, and you either already have the mix-amp and other equipment you need (or were planning on grabbing it all anyways), you really can’t go wrong with the Movo VSM-7.