The planar wars continue, and Moondrop, one of the leaders in the Eastern HiFi space has joined the fray with the Stellaris. Featuring a similar 14.5mm driver, it competes directly with the 7Hz Dioko, Timeless, Letshouer S12, and the several other planar IEMs we’ve been able to take a look at. At $109.99, it has a definite edge in price versus most of the market and is easily the best looking of all the major planars at the moment. Unfortunately, poor fit and tuning make this one you may want to miss.

The Moondrop Stellaris is easily the planar magnetic IEM I was most excited about this year. I’ve been a big fan of Moondrop products. To be frank, I’ve liked just about everything I’ve heard from them. Sometimes you find a brand that you just resonate with, and Moondrop has been that brand for me. I’m also a huge fan of planar magnetic headphones and earphones. A Moondrop planar? A match made in heaven.

So when it announced the Stellaris and it looked like a sister-IEM to the Moondrop Starfield, a dynamic IEM that I still love to this day, I sat on the edge of my seat hoping for a chance to try it out myself. When Shenzen Audio reached out to see if I would like to review it, I leapt at the opportunity to see what Moondrop had been up to in the planar world. 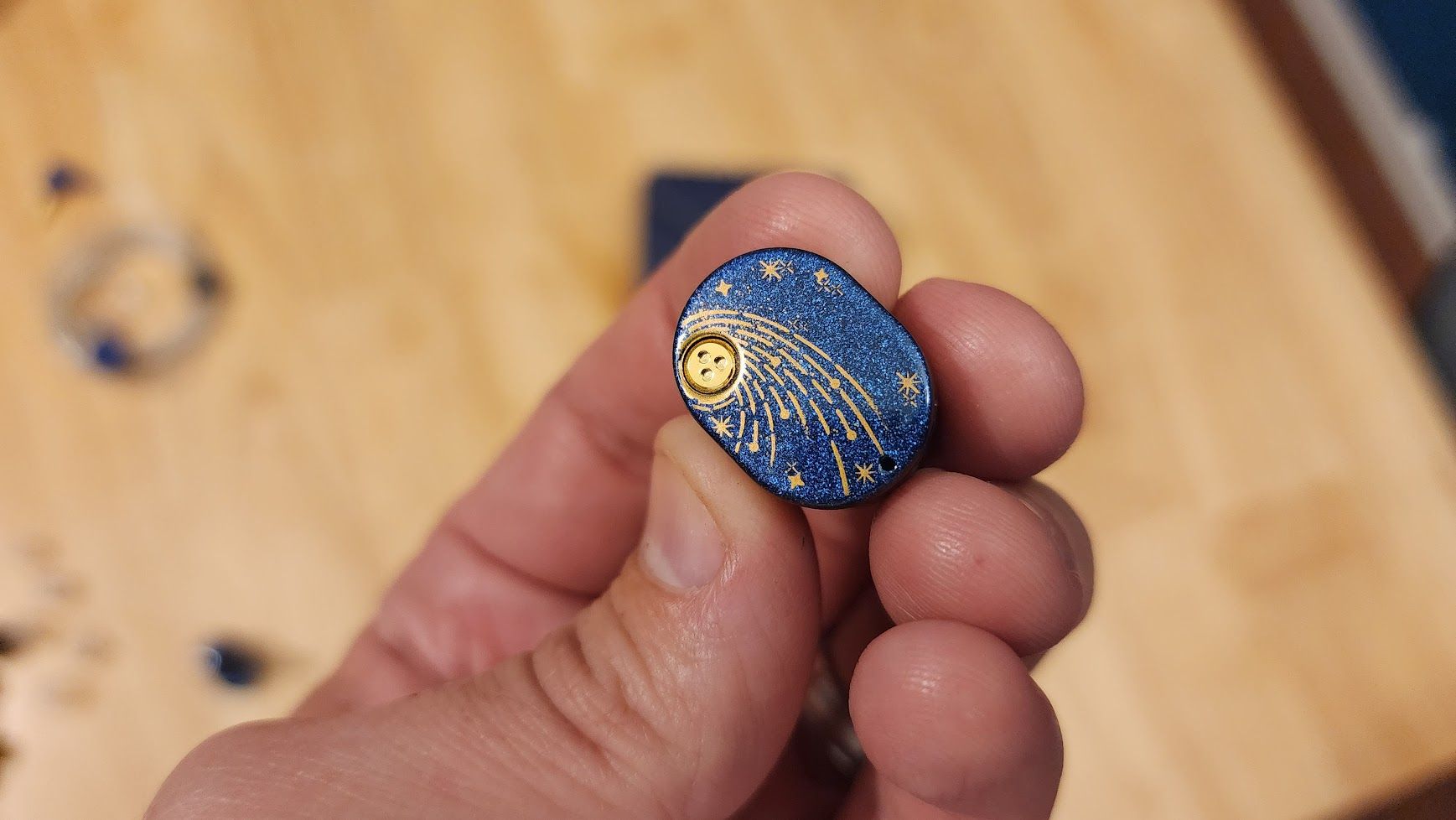 Taking a closer look at its design, there’s a lot to be excited about here. When it first arrived at my door, I was impressed by the paint job. It is indeed a sister-IEM to the starfield and the increased size just makes the blue-glitter, gold star design look even better. There are even little gold inserts in each one that Moondrop has painted around. They are easily the best looking of all the planars, except for perhaps the DUNU Talos, but the two are so very different it’s like they’re in different universes (pun intended). 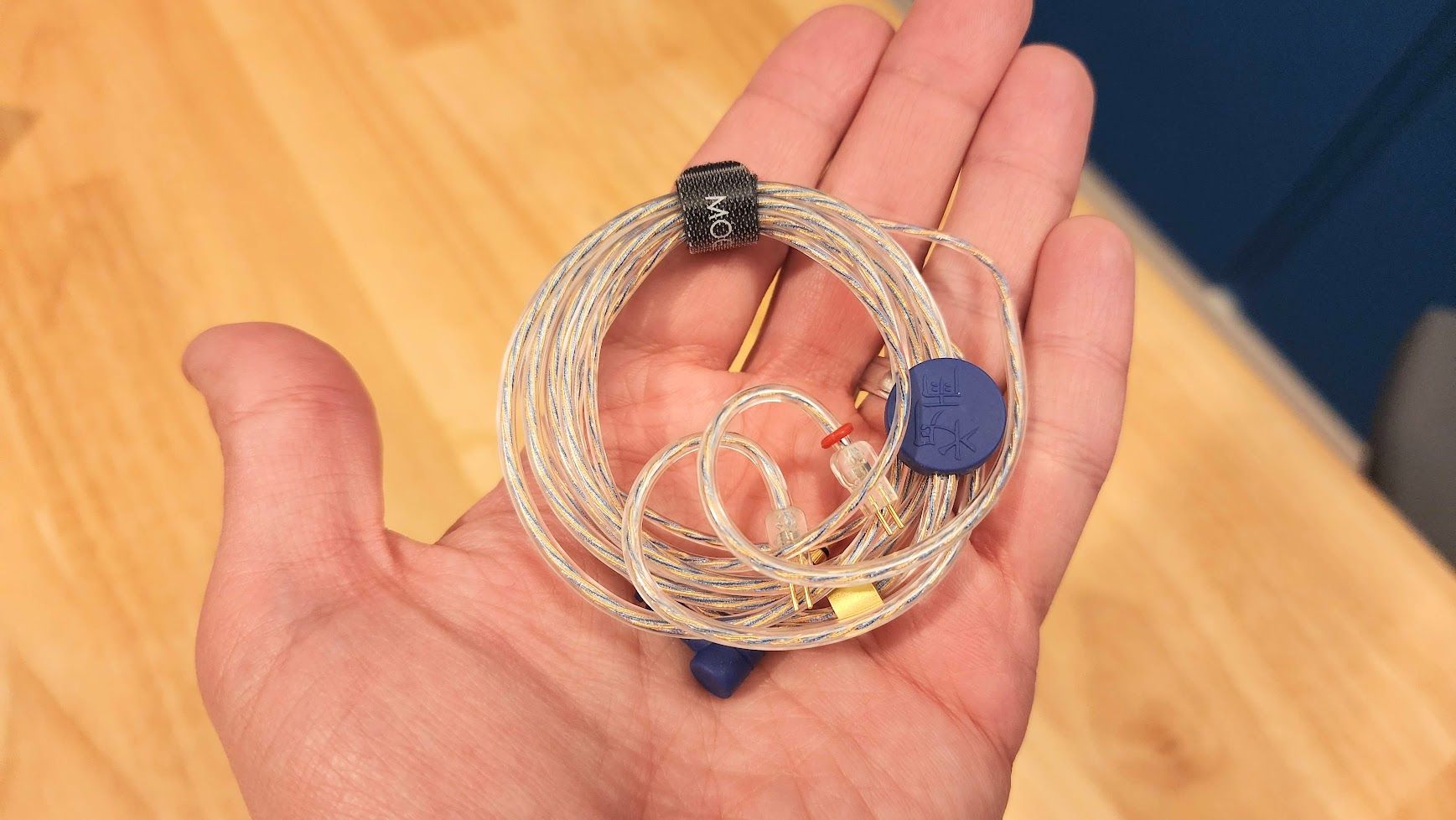 That design even extends to the cable. I mean, look at it. It is the most color matched cable I’ve ever seen. Even the wires inside the sleeve are blue and gold. The Y-split: blue. The chin cinch: gold. The plastic on the 3.5mm termination: blue. The plug itself: gold. It’s gorgeous. And just as importantly, it’s soft and feels high quality. 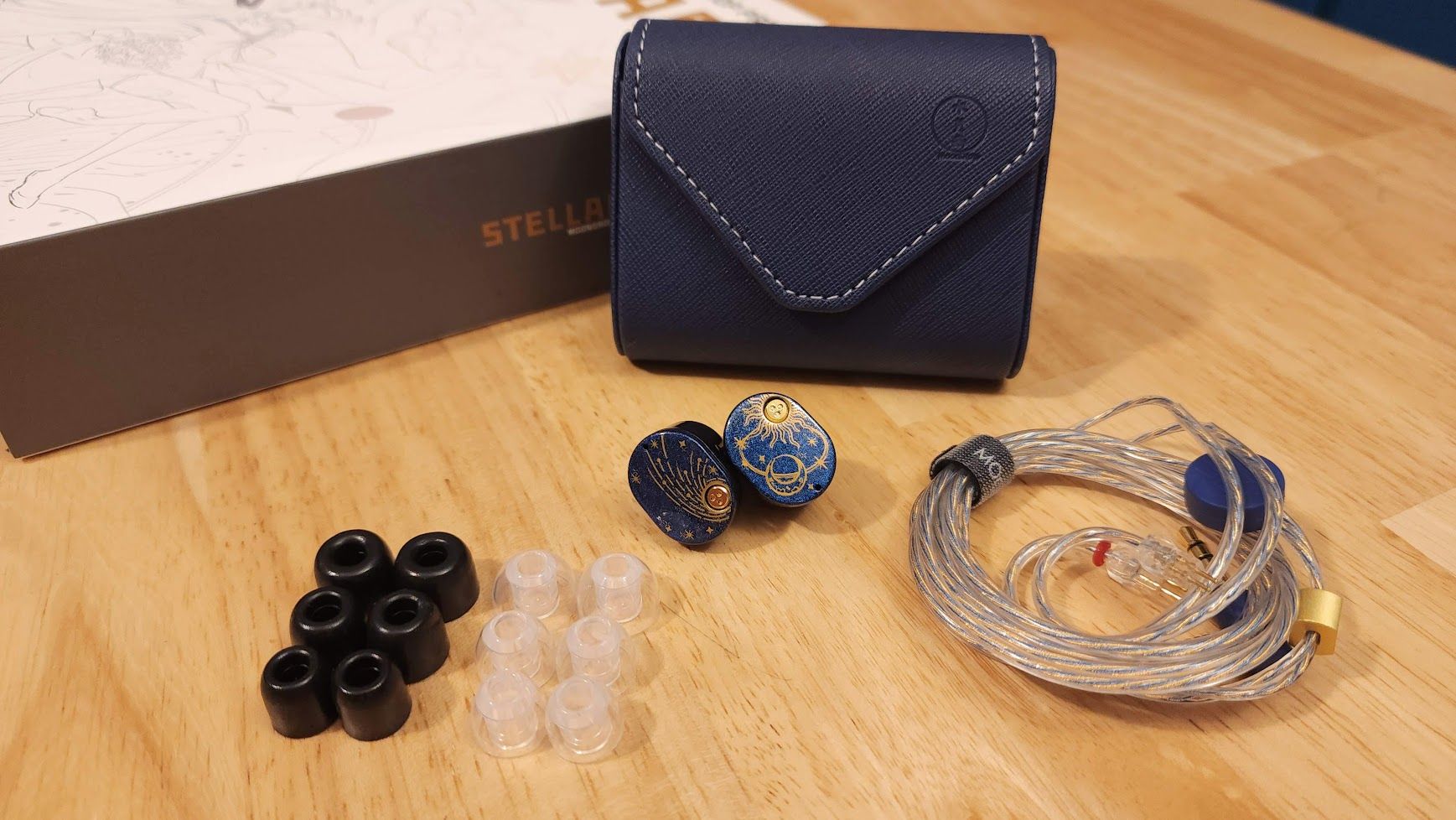 Moondrop also included a selection of silicone and foam tips in the box, as well as its usual high quality blue carrying case. The silicone tips are a new design for Moondrop and I quite like them. They’re soft and have a bit of a sticky quality that help them seal off the ear well (or should, more on that soon). The foam tips are also quite good, but I’m not a fan of foam. I’ve used them many times in the past, but I don’t like how they degrade over time and can feel a bit awkward in my ears. Unfortunately, foam tips are pretty much necessary with the Stellaris. 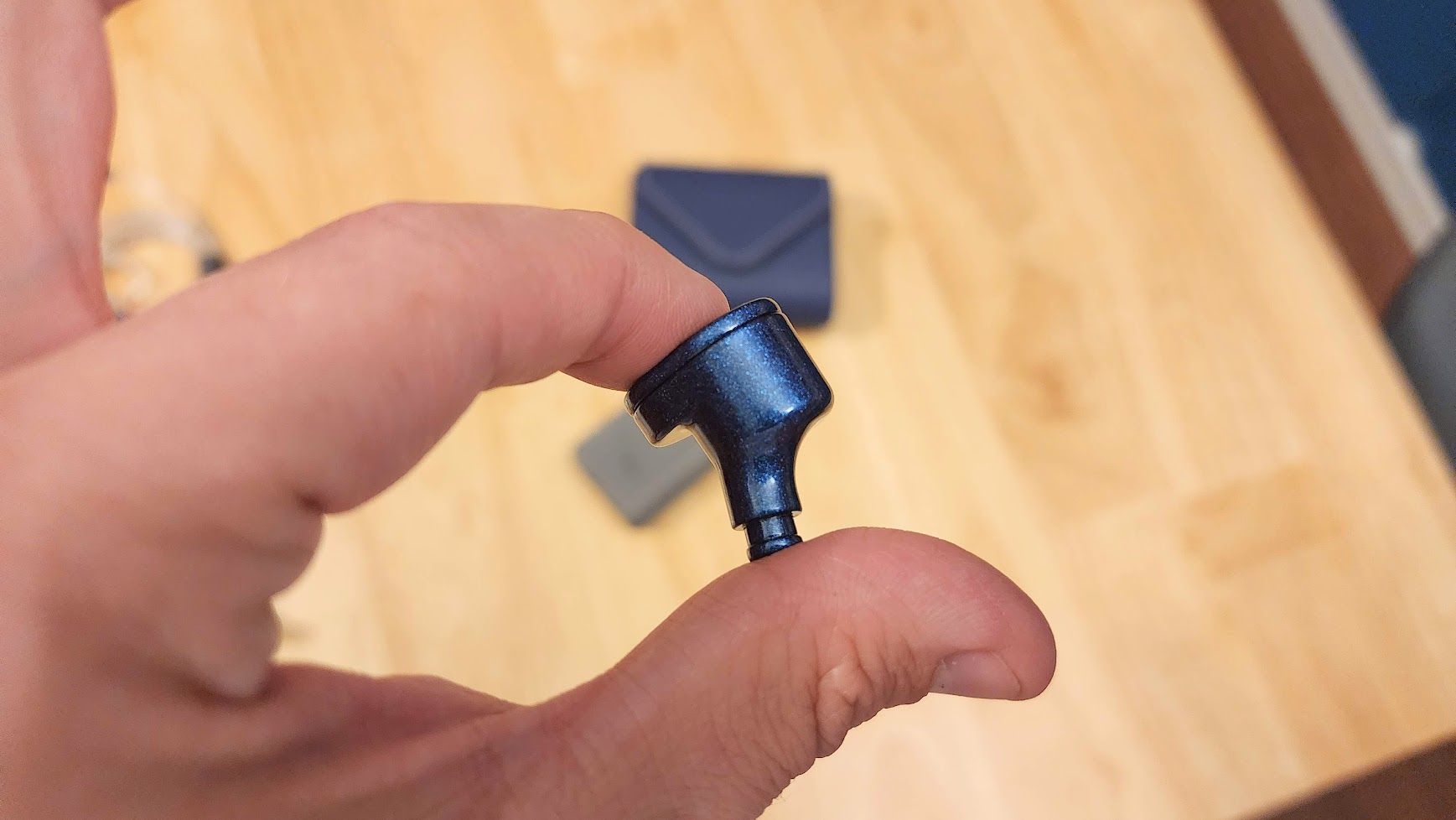 That’s because these IEMs are huge. Not only is the chamber for the driver thick, but the nozzles are long. It’s a baffling design that really hurts their wearability. For my ears, which are pretty average, I think, they stick out and are secured pretty much by the ear canal alone. Since the buds are metal and have some weight to them, they naturally came unsealed over and over again. 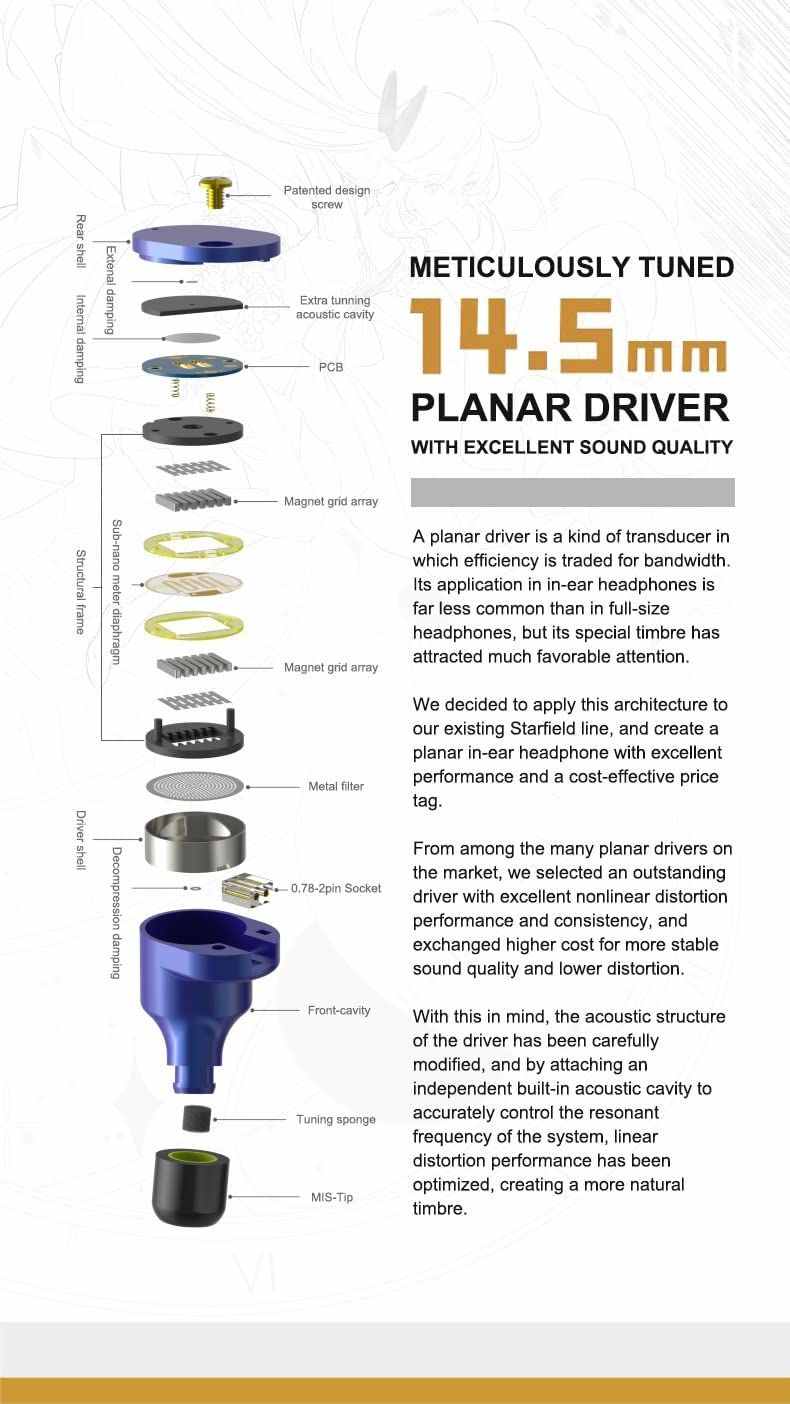 Inside those shells, the Stellaris uses a 14.5mm planar magnetic driver. It’s quite close in size to the other planars on the market currently. Moondrop didn’t design this driver in-house but it did modify it to achieve their desired sound signature. A lot of thought went into its design, which makes its poor fit and strange, over-bright tuning a bit puzzling. I’m not sure what they were going for here.

With that in mind, let’s move onto Fit and Comfort and Sound.

The fit is unfortunately terrible. The shells are large in general, but they’re also use long nozzles. For my ears, this causes them to stick out far enough where my outer ear can barely support them at all. Instead, it’s mostly the ear canal holding them in place.

Moondrop includes foam tips which help to secure the buds, but if you don’t like foams (as I do not), you’ll be stuck adjusting these and reseating them after all but minor movements. As a daily wear or even something to relax in, they miss the mark. 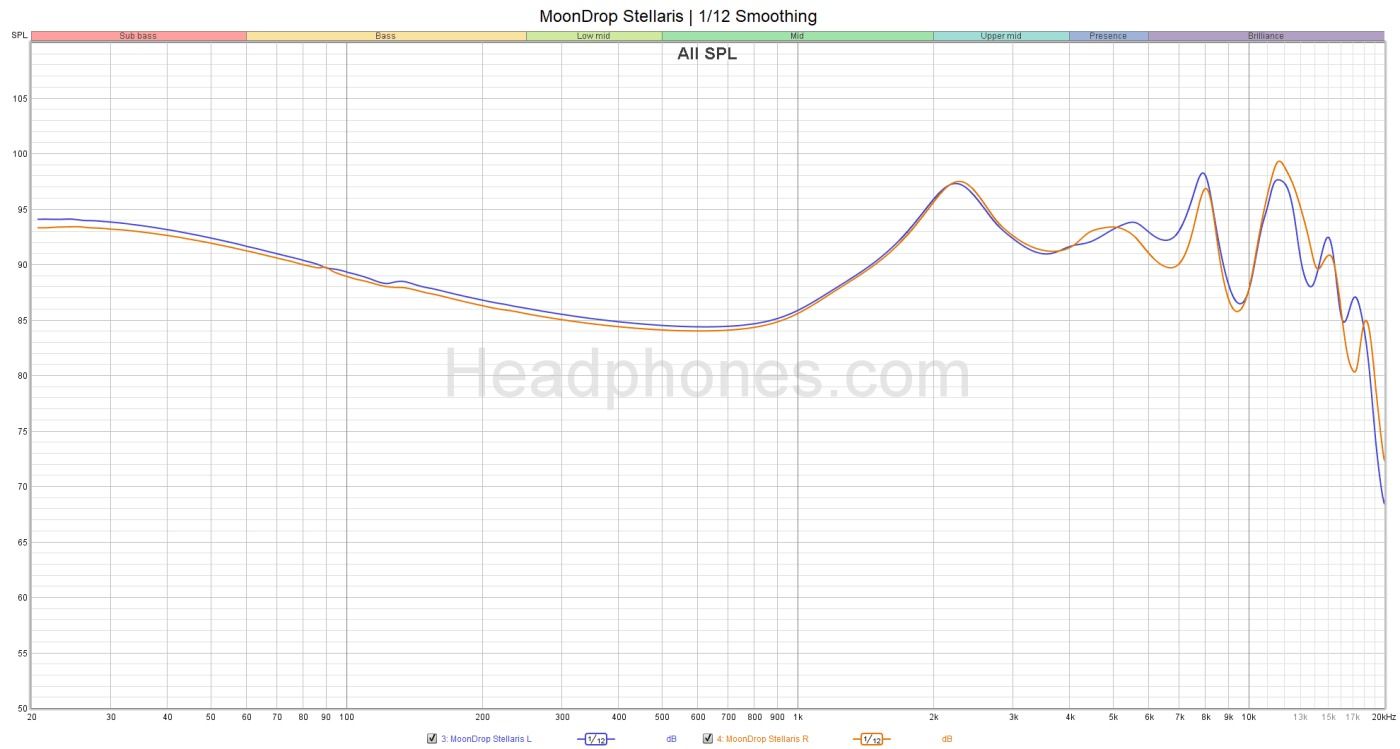 The Stellaris has a pretty unique tuning for Moondrop. As you can tell from the graph above, this is a set that’s essentially all about the upper-mids and treble. We have a bit of a sub-bass elevation, which you’ll read about below, but if those treble spikes concern you, they should. They make the Stellaris sound bright and a bit thin. They also have a tendency to make male vocals in particular sound a bit unnatural. I’m usually a fan of Moondrop’s tuning, but I can’t say that this is something I enjoy.

Bass: The Stellaris surprised me with its bass performance. It has good reach, extending low to amp up the sub-wooferlike energy of Jonny Craig’s D.R.E.A.M. It’s definitely a sub-bass centric tuning (bass you can “feel” more than “hear.”) Low end texture is good, but with the declining mid-bass, it lacks in body. The driver is fast, so you can count on a bit of punchiness and bass texture to be present. It’s just not very forward.

Mids: The mids aren’t terribly forward, and vocals can vary from good to unnatural. Female vocalists like Adele tended to sound fine, but swapping to Memories by Jonny Craig, there’s an unnatural sizzle to his voice that I couldn’t get past. Going through my library of progressive rock, this occurred with other singers that utilize a wider singing range. Brent Walsh in I The Mighty’s Degenerates. Hands Like Houses’ Lion Skin. Guitars sound crisp and clear but can have a sharp edge thanks to all of the Stellaris’ treble energy. 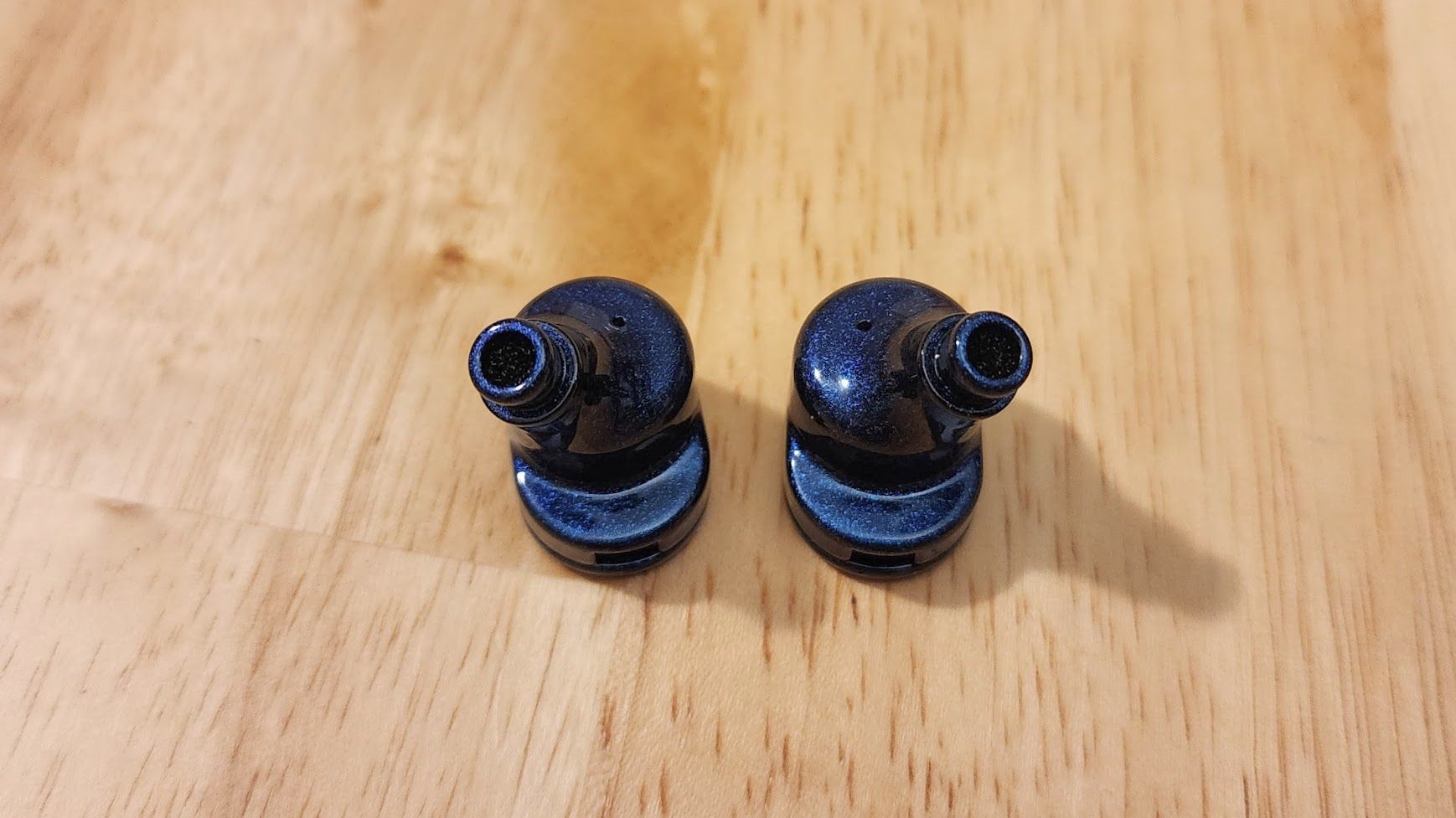 Treble: Bright. The tuning on these IEMs is very treble centric. This is great for being able to hear lots of details but can make music and games sound sharp and sibilant. As discussed above, this tuning also leads to some weirdness in the tonality lower in the spectrum too. Rock, metal, progessive, and even acoustic guitar tracks oscillate between sounding crisp and detailed and sharp and grating (especially with cymbals).

Technical Performance, Soundstage, and Imaging: This is where the Stellaris shines and why some people might enjoy it, even with its trade-offs. The technical performance of the Stellaris is very good. Not only is the driver quite resolving but its brighter tuning draws those details out and puts them center stage more than any of the other planar IEMs in its price range. Details are what the Stellaris is all about.

Soundstage and imaging are pretty good too, but not groundbreaking. Sounds seem to come from just outside the ear, so you have a bit of extra breathing room for your music and games. Layering is decent, so you can hear each instrument and sound source cleanly and pick out where it’s coming from within the stage. These technicalities do a good job of supporting the presentation of details but aren’t groundbreaking in their own right. 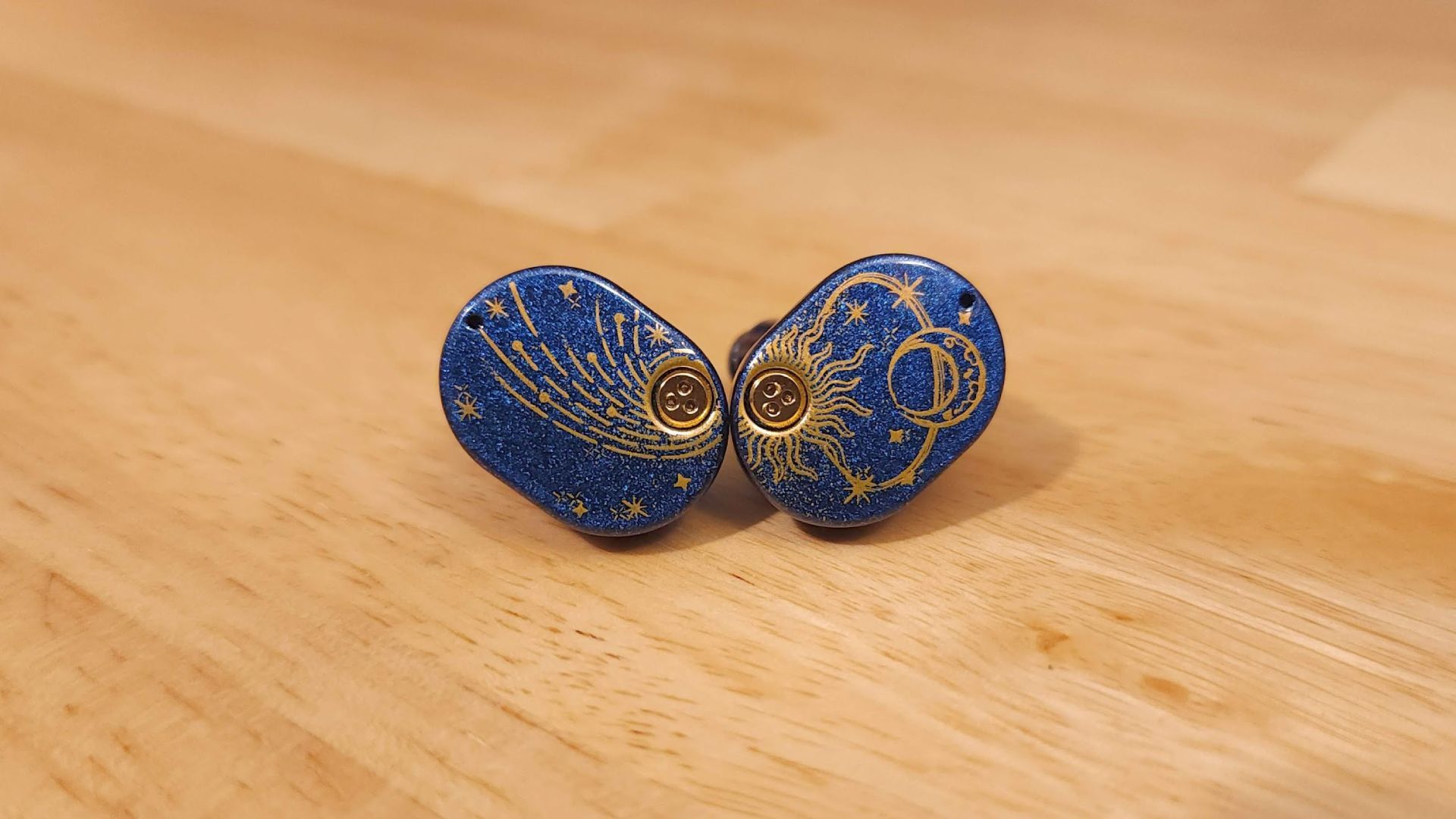 The Moondrop Stellaris isn’t for me. I’m not a fan of the tuning — and I’m not someone who is particularly treble sensitive either. It’s brightness colors vocals a bit too much and cymbals can just be too harsh at moderate volume levels. In games, the sharp crack of sniper rifles made me wince. If you crave details, this set fits the bill, but for me, the tuning and poor fit leave me putting it to the side in favor of the other options in this space.