Moondrop has proven to be one of the most exciting IEM brands of the last year, headlining 2020 with the excellent Moondrop Starfield. In June, we experienced the first of its latest pair of small, affordable earphones with the Moondrop SSR. At only $39.99, it impressed with its all-metal build and reference sound. Today, we have its matching sibling, the Moondrop SSP. This time, the focus lies on energy and bass and embracing the fun in listening to your favorite music and games. Same price, new sound — is this new model worth a buy? Let’s dig in and find out. 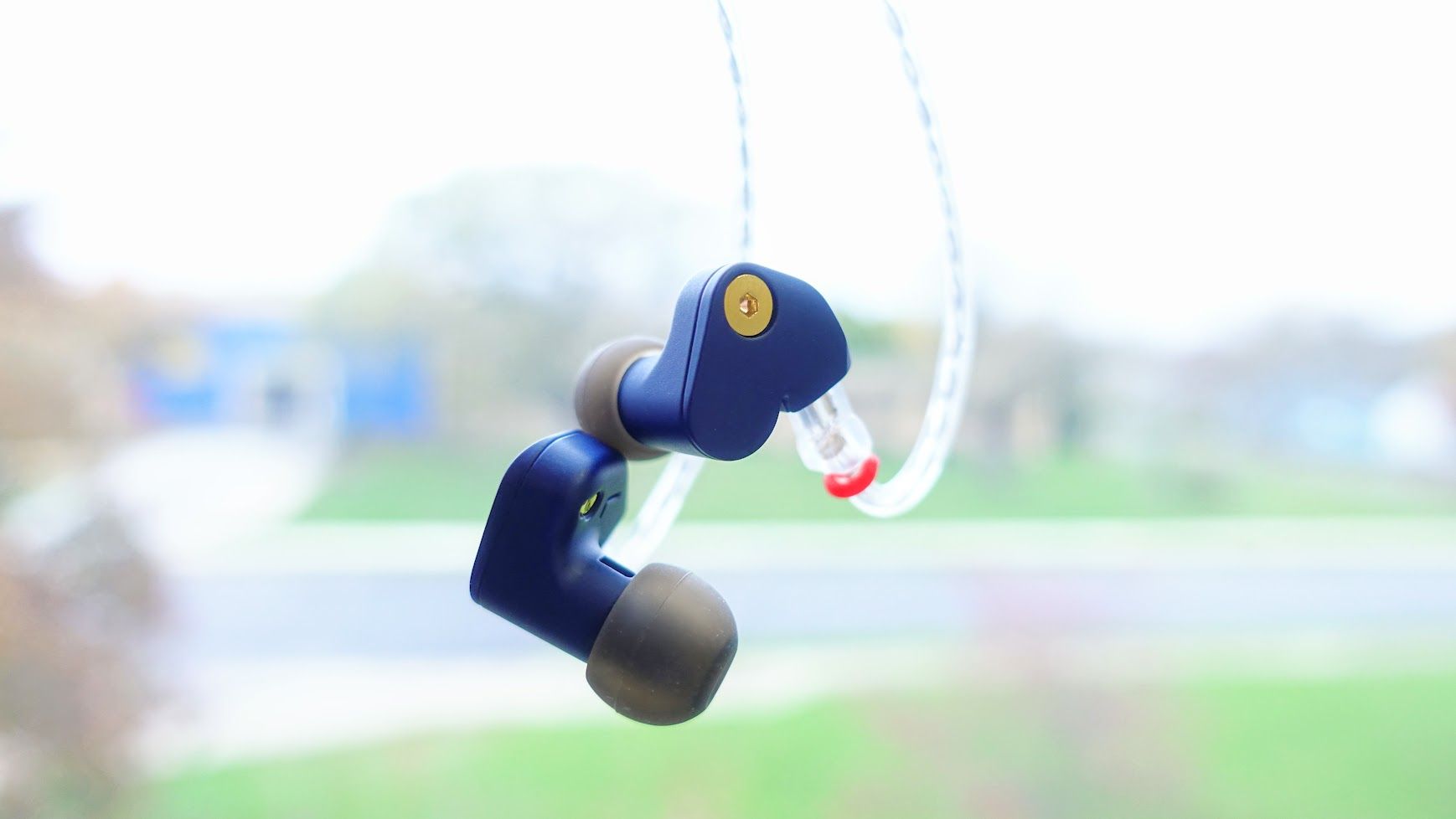 Visually, the Super Spaceship Pulse is identical to the SSR in build and size. The biggest difference is that the pre-release sample I was sent features a good looking blue and gold colorway. It looks much nicer than the bare metal of my SSR sample and is really one of the high points of both IEMs: color options. They’re a very understated earphone due to their small size and the way they nestle inconspicuously into your ear, but they still manage to look very good. 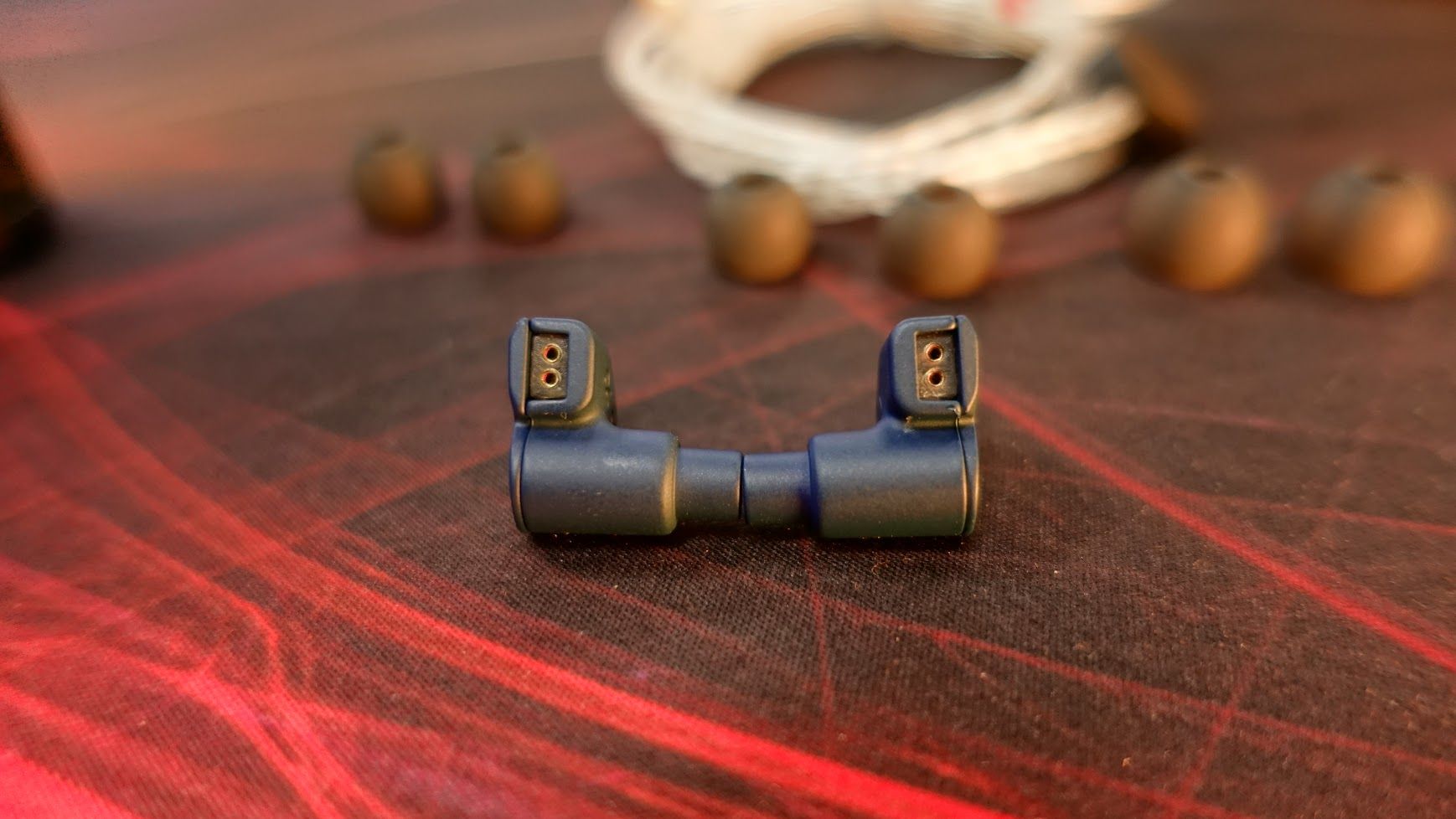 For this price, I’m also very happy with how durable they are. The housings are made of metal alloy, so they won’t break easily. They also support a detachable cable that uses a two-pin connection. I like these because they tend to break less than MMCX in my experience and are easier to attach and detach. The jacks are also slightly recessed to hold the plastic instead of putting all the torque on the pins, so you don’t have to worry about the earbud being ruined because the pin broke off inside.

Speaking of the cable, it’s better than average for this price among U.S. brands but leaves something to be desired compared against other Chi-Fi IEMs. It’s a 4-core, silver-plated oxygen-free cable, so it gets the job done well, but feels slightly shorter than average. It’s fine for connecting to a smartphone in your pocket, but with a PC, it didn’t leave enough room for me to recline in my chair without sliding my tower forward, so an extension will be in order if that’s how you plan to use the SSP. 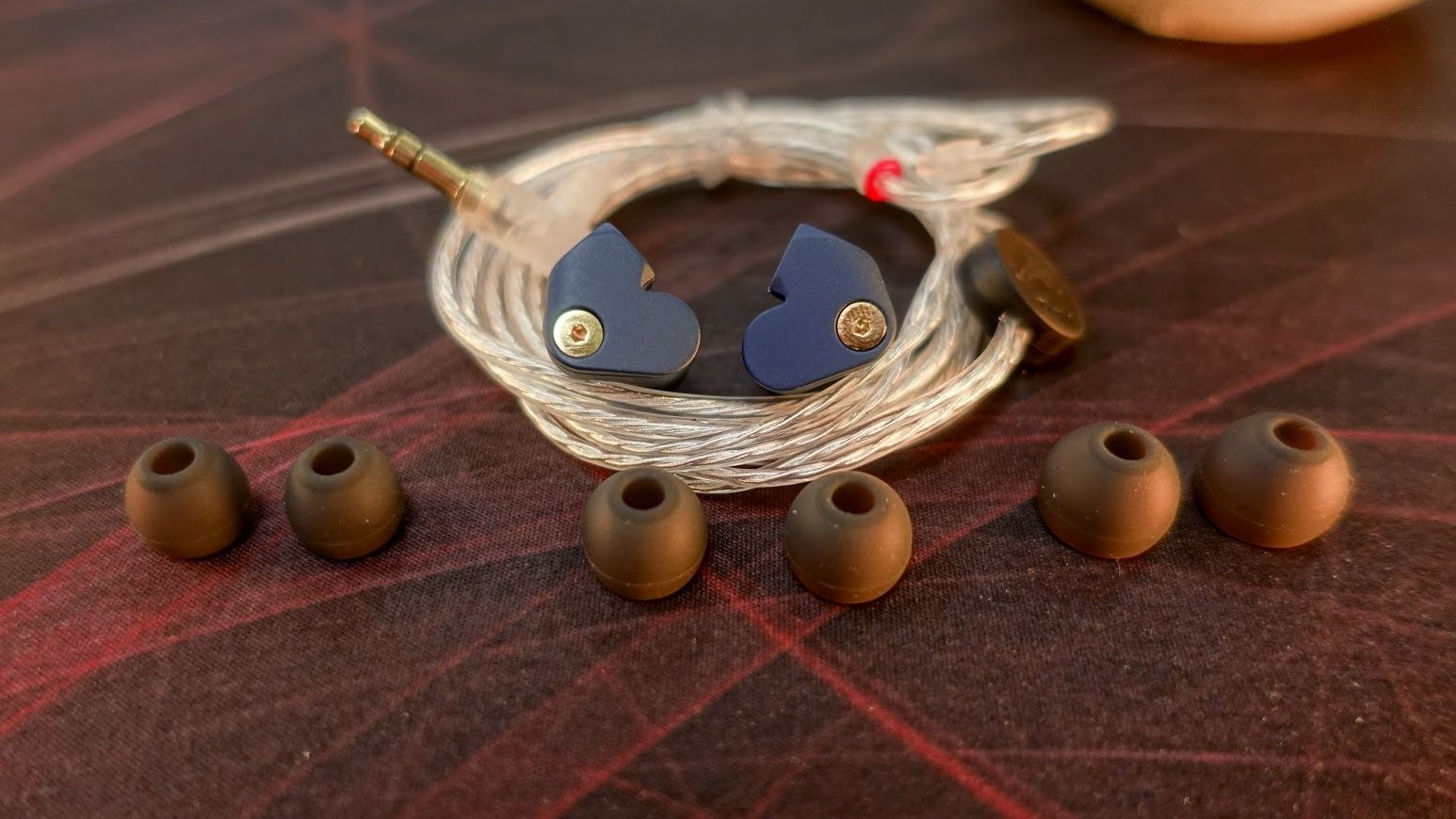 But, it’s hard to be too picky given the price. The majority of what you’re paying for is the design, construction, and R&D of the buds themselves, not the few accessories that come included in the box. I received an early sample that lacked retail packaging, but the accessories are very similar: three pairs of tips (S/M/L) and the cable; however, retail boxes will also include the storage baggie. For the majority of users listening from their phones on the go, this will be perfectly sufficient.

Which is another nice point to these earphones: you won’t need any special equipment to have them sounding their best. They feature a low impedance of 16 ohms and a high sensitivity of 112dB/Vrms. If you’re not into audio-speak, that essentially means you can drive them on anything. I’ve played them straight from my computer, out of a Note 9 and out of a dongle DAC on my Note 20 with no issue and pushed to their potential.

So far, all of this is the same between the SSR and SSP, and that also seems to be true of the driver. Both versions are listed as using single, beryllium-coated dynamic drivers. Dynamic drivers are known for their presence and bass response, but the beryllium coating adds rigidity for enhanced details in the treble. Combined with the tuning of the driver, this makes them rather bright without trending into sibilance.

Where the SSP shakes things up is in the low-end. Put simply: there’s more of it. The bass is enhanced but remains tight and responsive. Moondrop says that they accomplished this through adjusting the four layers of dampers within the headphone, so this is more a matter of how the sound is being filtered before it reaches your ear versus fundamental changes to the driver.

The result is more appealing than the SSR, which I also liked. That headphone, while not exactly reference as the name implies, was more neutral than what we find here. The SSP by contrast maintains the middle and treble response but is a better fit for pop and bass-heavy tracks, as well as for listening to games and videos. It’s not overstated, just tweaked to offer a bit more “oomph.”

One of my reference tracks is Only Love by Pvris. Like the SSR, the clean guitar throughout the beginning rings out clearly without being sharp. Lynn Gunn’s vocals fall into the middle of the mix, but rise above when she sings out. The bass wells up, supporting the rest of the track but allowing the guitar to remain the driving melodic instrument. 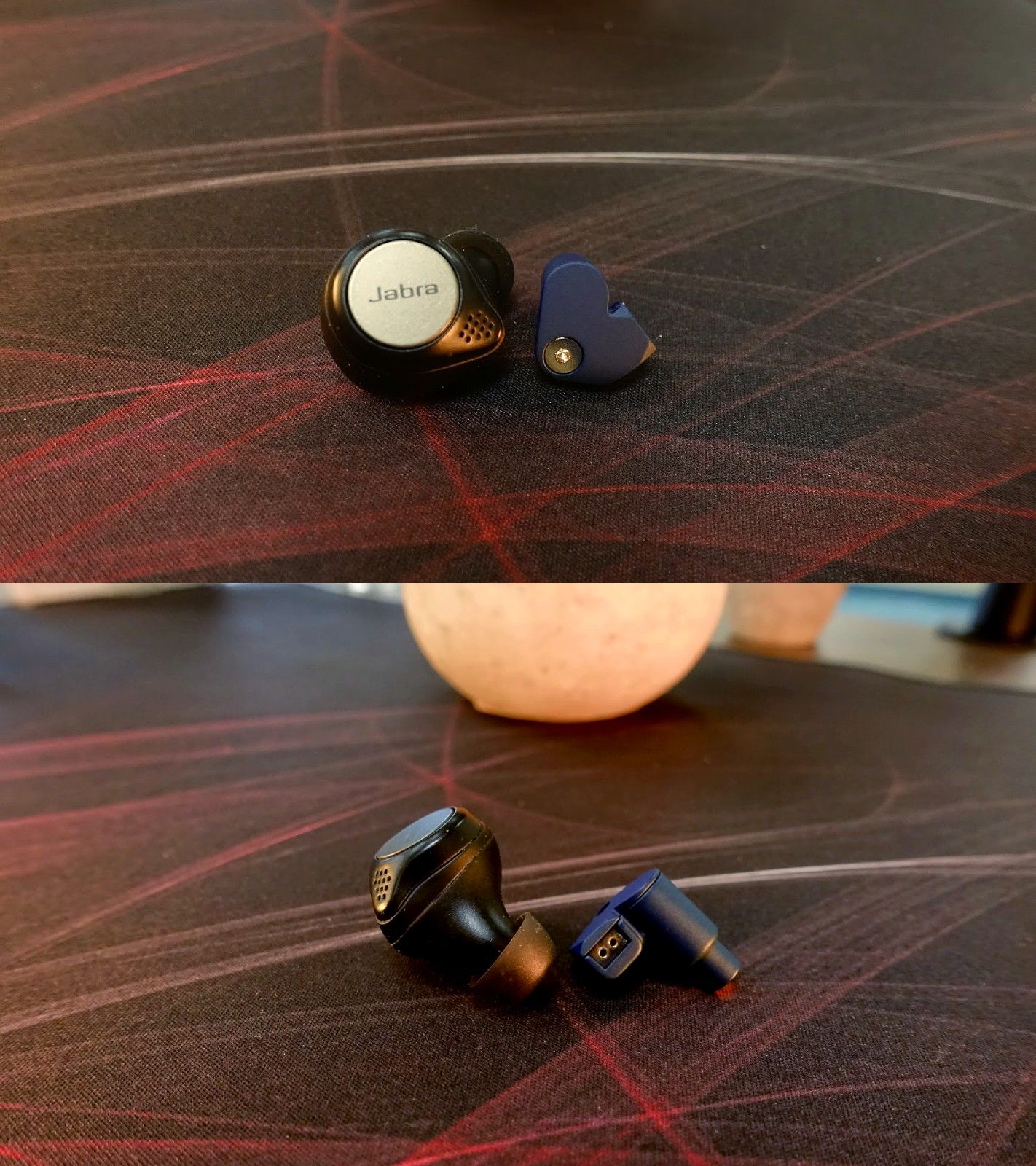 Switching to something a bit harder, Killswitch Engage’s The End of Heartache, the SSP rounded out the screamed vocal, removing an edge that might otherwise be harsh. At the same time, that upper-middle frequency bump did make some of the distorted guitars extra sharp. Throughout the album, this was mirrored, giving a dichotomy between the different rhythm guitars that was slightly fatiguing while not sounding bad. The tuning drew out lead lines and solos wonderfully. For rock and metal, the SSP is a bit of a mixed bag depending on thow the track has been mixed.

For gaming, the SSP did fine, but don’t offer the kind of soundstage most gamers will be looking for. Dolby Atmos or Windows Sonic is a high recommendation if you intend to game with these. At the same time, positionality was very good, so you won’t be disadvantaged. If you’re in a situation where you can’t use a gaming headset, these will make a fine plug-in and go solution in the interim.

Like the SSR, the SSP are a great value. Their tuning makes them more appealing than the SSR, however, and a better fit for pop music and gaming. For rock and metal, they’re more hit or miss, and as one of my favorite genres, that’s a meaningful change. Overall, I feel like these are simple a different flavor on the Super Spaceship line. If you need a small, lightweight headphone that won’t break the bank, these are a good choice, and between the SSR and SSP, you can choose whether you want a more flat or more bassy sound.

The product described in this article was provided by the manufacturer for evaluation purposes.
7.5Good
Pros
Cons
Tags
iems
audio
Lifestyle Tech
Moondrop