Moondrop has been on a roll with its budget earphones this last year and a half. Back in April of 2020, the Moondrop Starfield came out and wowed us with its excellent sound for the money. Earlier in May, it released its first true wireless IEMs, the Moondrop Sparks, that genuinely outmatch headphones twice the cost in sound quality. Today, I’m looking at the Moondrop Aria courtesy of Shenzen Audio. We’re back in the wired world for this one, but it’s an impressive set coming in at only $79.99. This isn’t one you’ll want to miss.

The Moondrop Aria is a second-coming of sorts. An Aria existed in Moondrop’s catalog for a period of time but was eventually discontinued. Compared to the bullet-shaped originals, the 2021 Aria I have in-hand today is quite different. It features a shape inspired by traditional IEMs, for one, and the exterior design has been changed from a simple silver frame to black with bronze colored swoops for decoration. It looks quite stylish, which is in keeping with the rest of Moondrop’s recent line-up. The shells are also made entirely of metal, which lends them a touch more weigh though they certainly aren’t heavy.

Inside those shells, the Arias are driven by a single 10mm liquid crystal polymer (LCP) driver. The interior of the earphone is brass and a high-frequency wave guide to tune volume and sound profile. The frequency response range is 5Hz - 36000Hz, well outside the bounds of human hearing. This should, in theory, mean that any distortion occurring at the fringes of this response will occur outside the audible realm. 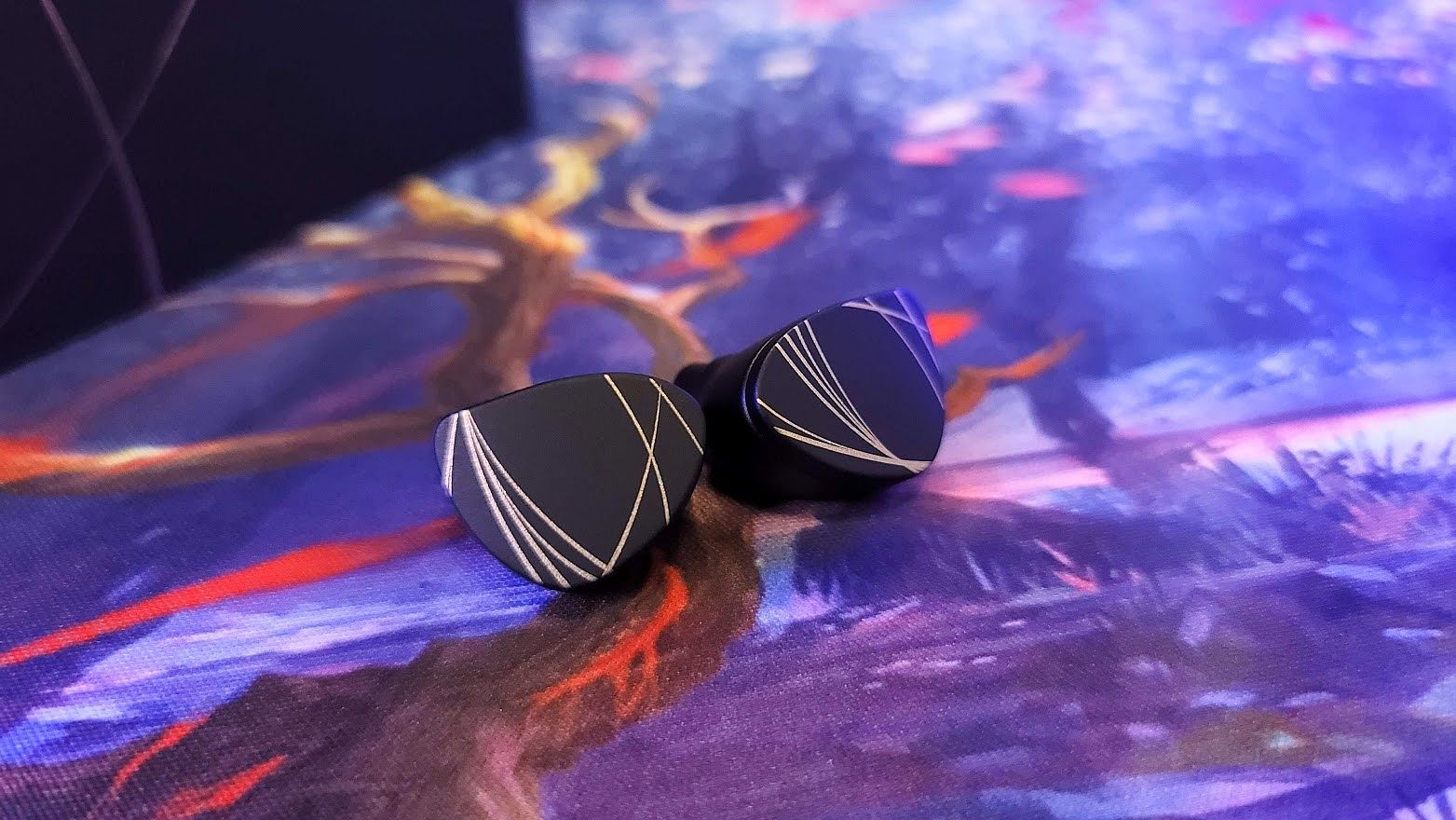 Like most Moondrop products, it features a plentiful arrow of tips and a carrying case. My sample featured six pairs of silicone tips in small, medium, and large. There’s also a pocketable semi-hardback travel case to keep the buds safe while traveling. Inside this case is the cable, which is braided this time around. This was frustrating at first because the cable immediately tangled and was filled with kinks and loops due to packaging. After leaving it unwound for a few hours, this improved drastically but tangling has been a persistent issue, so I would have preferred a rubber-sheathed cable. The cable connects to the buds with easy .78mm pins, a far preferable solution to the finicky and too-tight MMCX connectors found on many earphones at this price.

First impressions are largely positive. For the $79.99 asking price, the buds look good and feel durable and well made. The included accessories are plentiful, if not the most expansive I’ve seen, but that’s forgivable at this MSRP. Overall, it’s a well-done, well-presented package.

The Moondrop Arias are a medium-sized earbud and fit in my ears well. The nozzles are rather large, which could be a problem for smaller users. The housings aren’t overly contoured and did need to be repositioned if I moved around too much, so I wouldn’t use these for vigorous exercise. For sitting and listening or taking on a walk, they worked well.

Over multiple days of listening, I never found the Arias uncomfortable. There was no inner-ear pain to speak of. I consider these a good fit for long listening sessions. 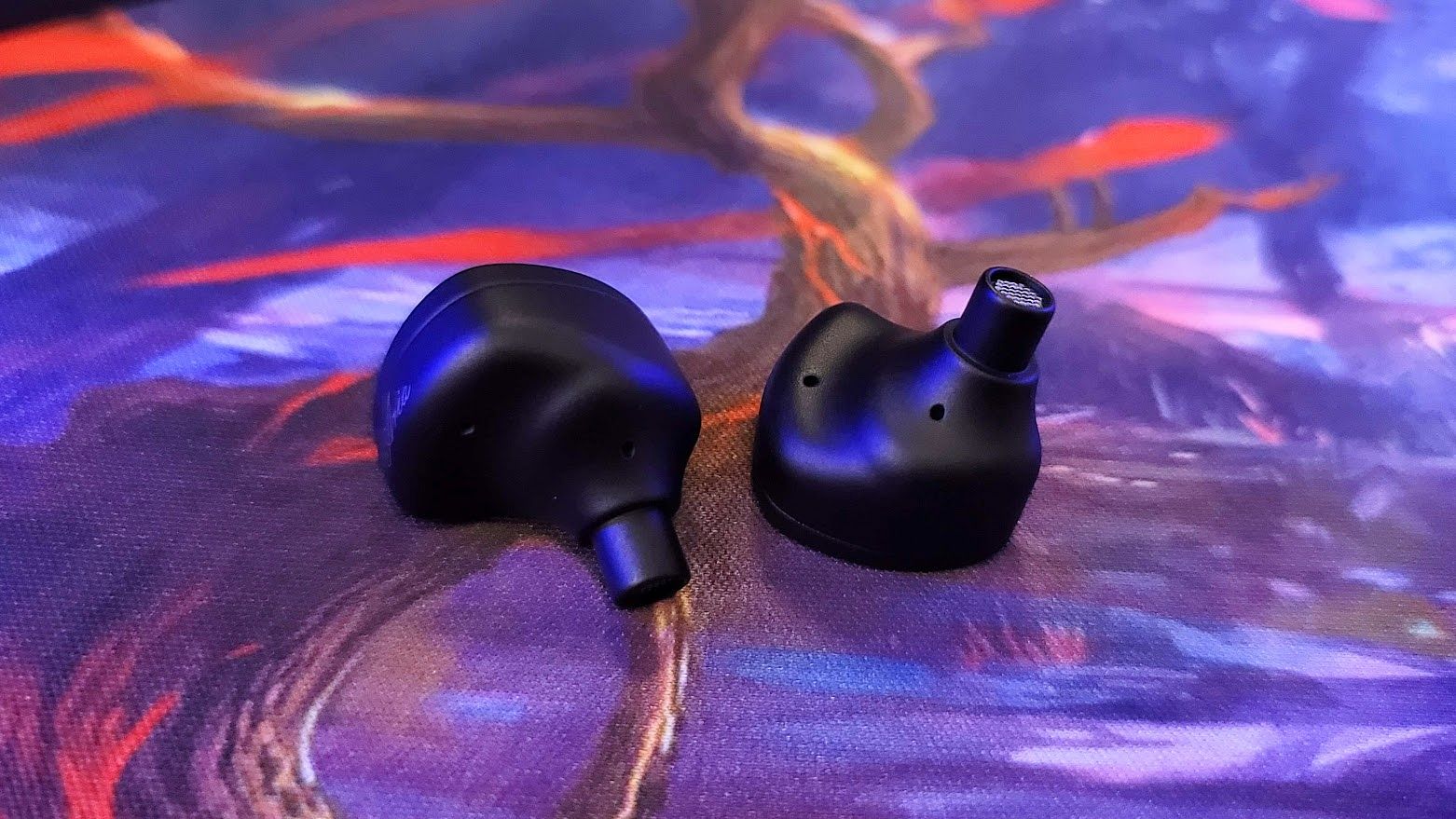 The Arias use Moondrop’s Virtual Diffuse Field tuning, which I’ve become quite a fan of. Like the Sparks and Starfields, this tuning elevates the bass and highs to create a u-shaped tuning that is rich in middle-high presence but offers a good amount of thump for songs with a lot of bass or kick drums. That said, these aren’t bass heavy, so if you’re looking for an exceptionally warm earphone for cinematic gaming or movie watching, these may not be the best choice.

Instead, I find the Arias to have a slightly bright tuning. Cymbals and high hats stand out in music. For games, I found small details like the crack of sniper rifles and breaking glass to jump out and have more of an edge. Edge. That’s an admittedly tricky word to use but don’t worry, these earphones don’t sound sharp or piercing. Instead, there’s a snappiness to them that makes those details sound more crisp and clearly audible. 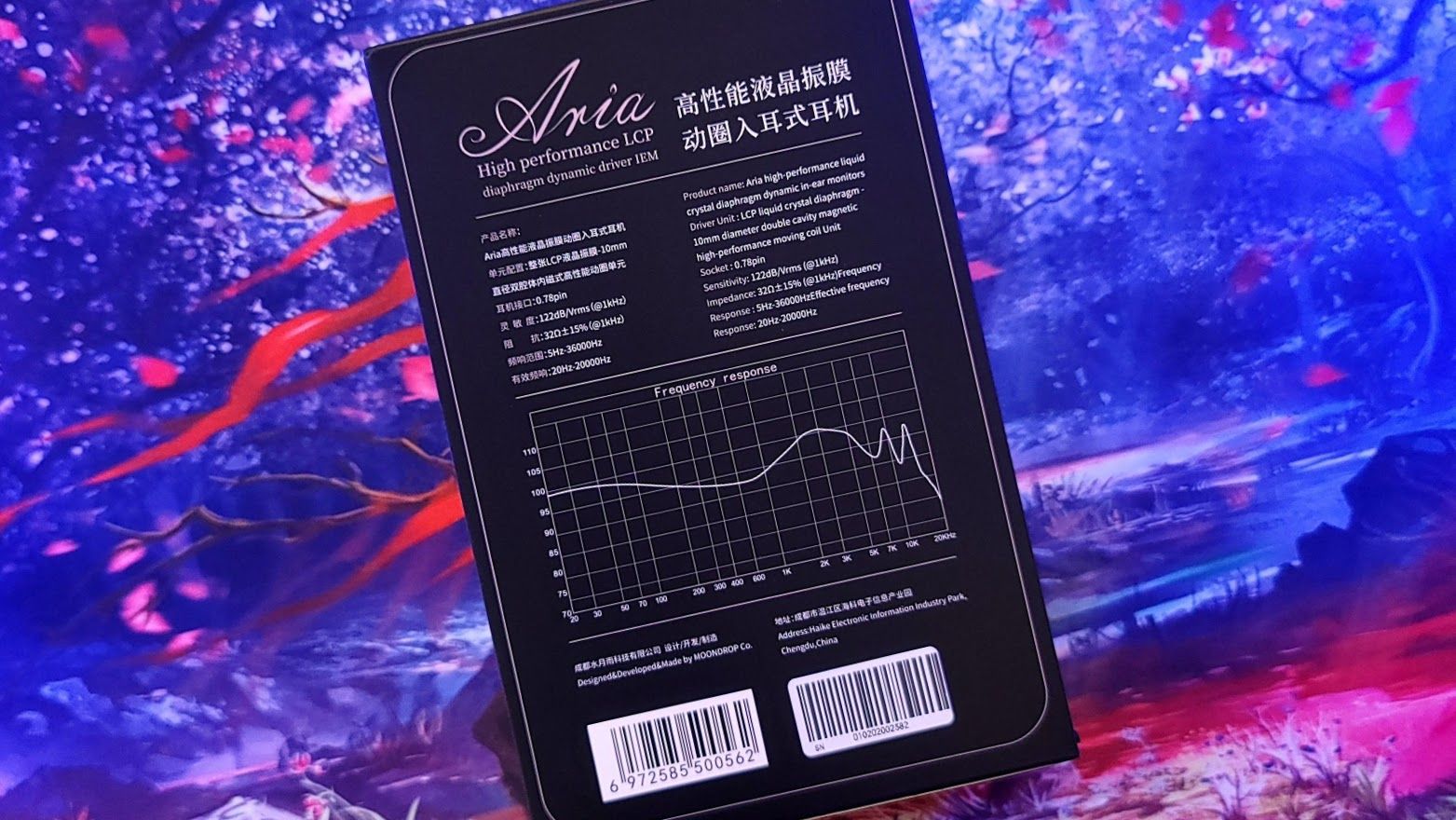 The mids are exemplified with warm vocals that sound natural and pleasing. Listening to PVRIS’s Thank You, Lynn Gunn’s vocals sounded sweet and intimate. At the same time, male vocalists like Claudio Sanchez in Coheed and Cambria’s Pearl of the Stars were less forward no less less natural, making for a very easy, enjoyable listen. This is also good for gaming as team call-outs and voice chat will sound a bit closer to your ear.

Bass, on the other hand, is just enough and a touch more for fun’s sake. These earphones can thump when called on but more often do a good job of holding down bass to provide a full-bodied bed for whatever you’re listening to. For hip hop, like Tom MacDonald’s Church, you might find yourself reaching for the EQ. For games, however, the short bursts of intense punch can be great for shooters especially. 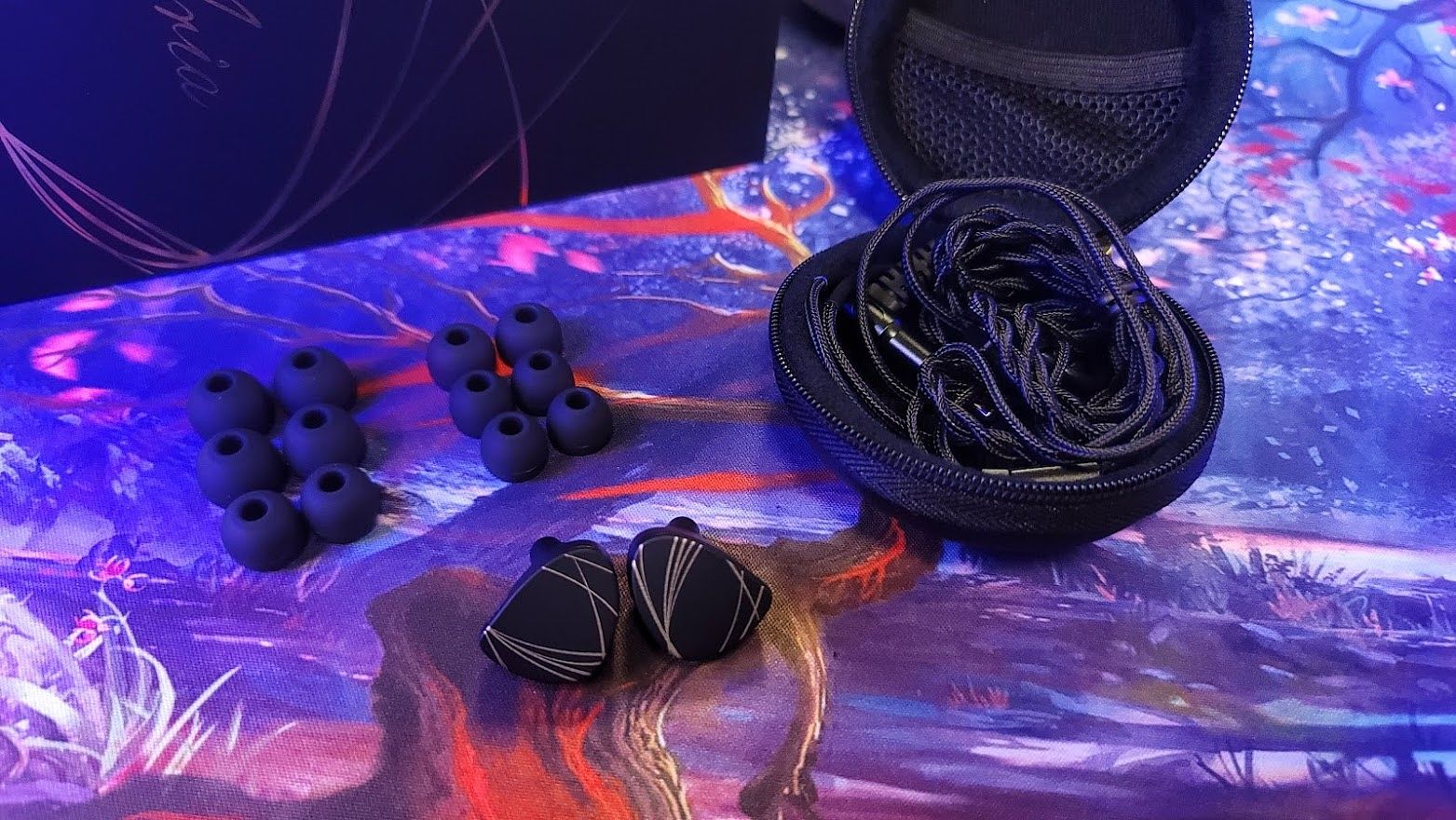 Overall, the listening experience here is very positive. The Arias managed to sound great whether I was listening to pop, metal, hip hop, leveling an alt in WoW, or playing a round of Battlefield V. They’re a very dynamic IEM. At the same time, though the soundstage is fairly wide for an IEM (heard primarily through the position of percussion and percussive sounds like gunshots and explosions), the rest of the audio range feels closer in. There is less separation between instruments and that reduced breathing room results in less fine detail, like the minute texture of guitar effects. If you’re not a detail-head, that slight shift will probably go unnoticed but is one of the ways the Aria shows its lower-cost design.

Comparing them side-by-side, the Arias bear a remarkable resemblance to the Moondrop Starfields. That’s a net positive for listeners looking to save a little bit of money as the Starfields still retail for $109. I still prefer the design of the Starfields and feel that they pick out ever so slightly more detail, but there’s no mistaking that these earphones are very close. Given how good the Starfields were, that’s a great thing. 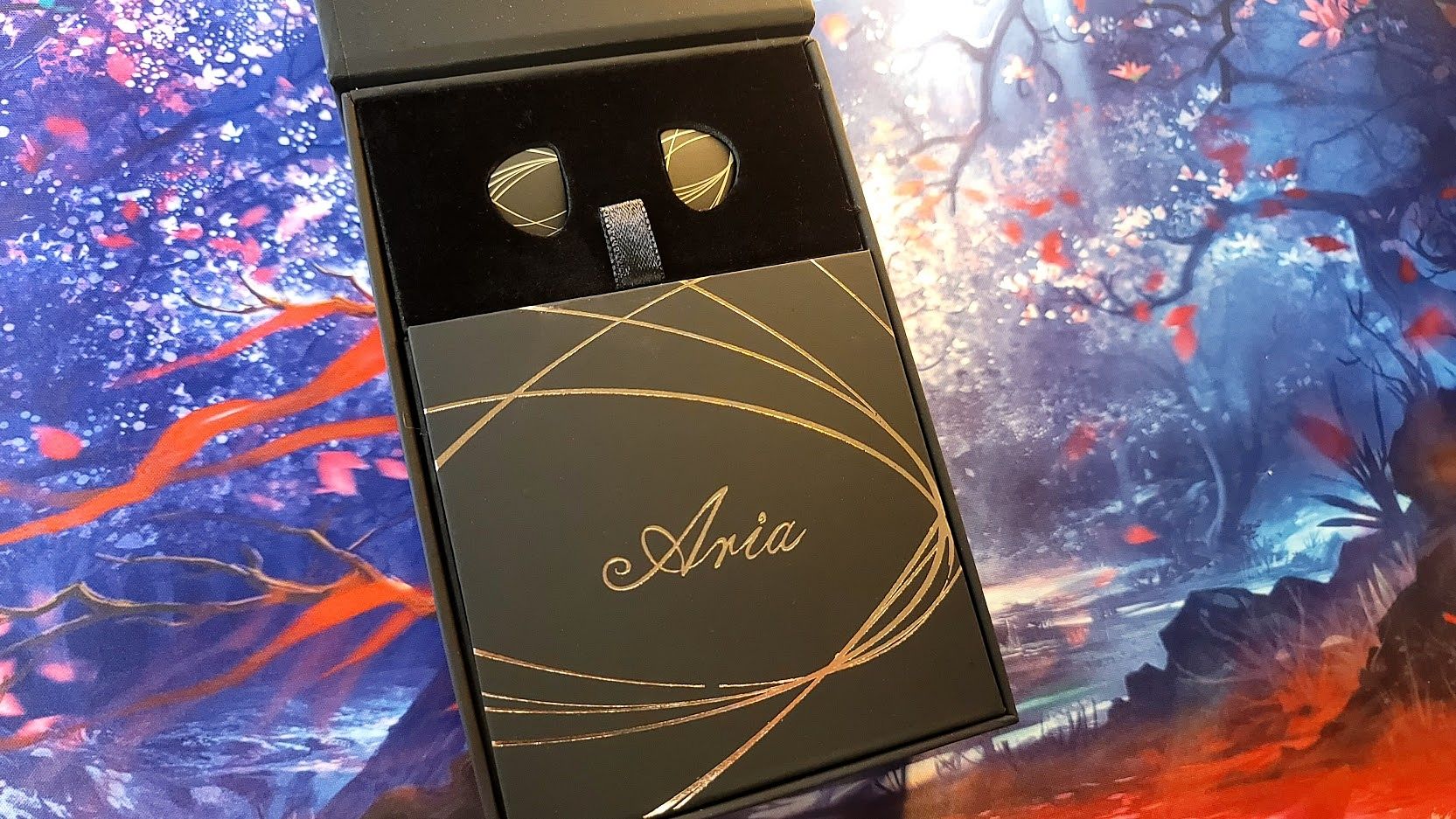 At  $79.99, the Moondrop Aria are one of the most impressive IEMs I’ve tested this year. They’re close enough to the Starfields so as to replace them (but I still think the Starfields look cooler overall). If you’re looking for great sound on a budget, these are definitely a set to take a closer look at.