Studio monitors are an essential tool for content creators. People are far more likely to forgive poor video quality over audio quality; thus, creating a solid audio mix is key to great content. While microphones and acoustic dampening will take you so far, what can be achieved in post-production can take your mix to the next level.

This is where a good set of studio monitors can make or break your mix. While there are some options that are both amazing and will most likely break the bank we’ve seen a shift in recent years to more affordable options for content creators. Monoprice has created the DT-3BT Multimedia Desktop Speaker with the hopes of bringing studio quality to consumers without the studio price. Just how well they accomplish this with their studio monitors is something I set out to determine and I’m here to share those results. So grab that coffee, kick back and check out our review of the DT-3BT Multimedia Desktop Speakers for developer Monoprice. 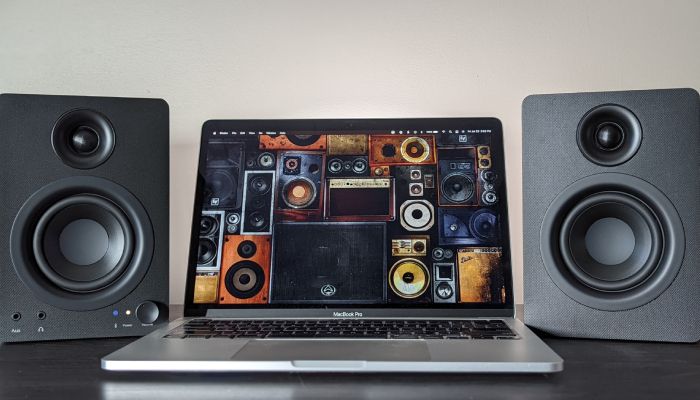 The DT-3BT monitors are built exceptionally well. Like most studio monitors they are designed to maximize acoustic quality in a compact form factor. The rounded cabinets have a beautiful albeit subtle texture with a flat black face plate. The woofer and tweeter are exposed giving the whole speaker a clean minimalist appearance. 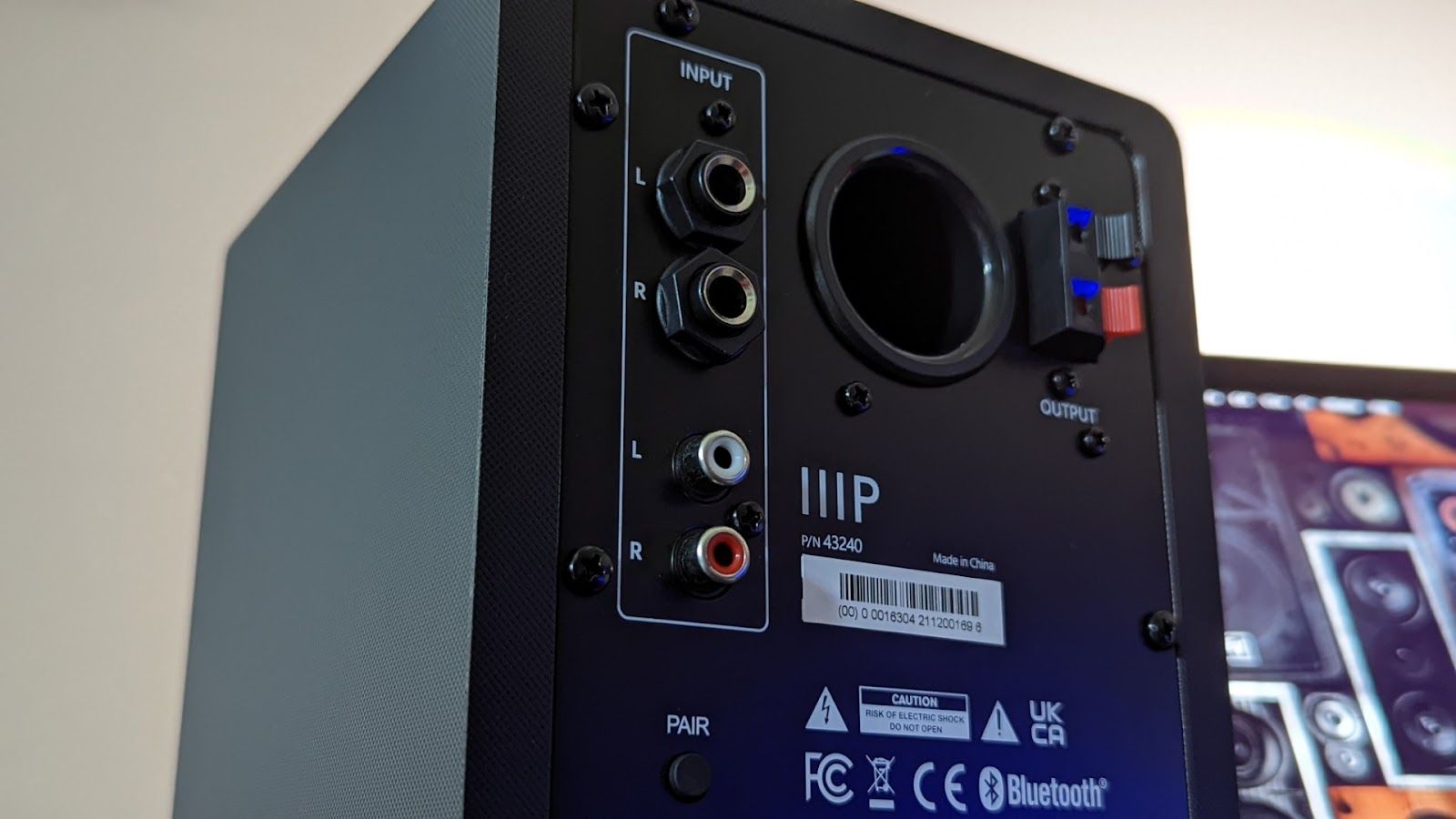 Additionally, the DT-3BT comes equipped with multiple inputs to host sources ranging from classic audio interfaces such as DVD players to phones or even professional mixers. This attention to detail allows the  DT-3BT to be used in a host of settings and leans into Monoprice’s mandate to make quality gear accessible to consumers. The DT-3BT also supports Bluetooth 5.0 allowing for remote pairing and audio streaming.

The cabinets feel sturdy and well built and come with all the cables needed to get up and running. The addition of Bluetooth makes it exceptionally easy to quickly set up and play without running additional cords or connections. The whole setup looks clean, is easy to set up and gives content creators a lot of options to fit their needs.

Like most studio monitors, the DT-3BT is designed for nearfield listening. In short, they are designed to minimize the range between the monitors and the listener. In general, nearfield listening monitors handle a wider range of frequencies and produce clear, detailed sound (especially with vocals). This type of monitor is going to best represent an unbiased and accurate capture of the original sound. When you mix with these types of monitors it helps produce a mix that will sound great on the widest range of audio devices possible.

Monoprice had one goal in mind with the creation of the DT-3BT; to create studio monitors that offer flexibility and quality without making the bar for entry too high. The build and design speak to that goal. There is no fuss or hassle involved with these monitors. They work out of the box and they work well. 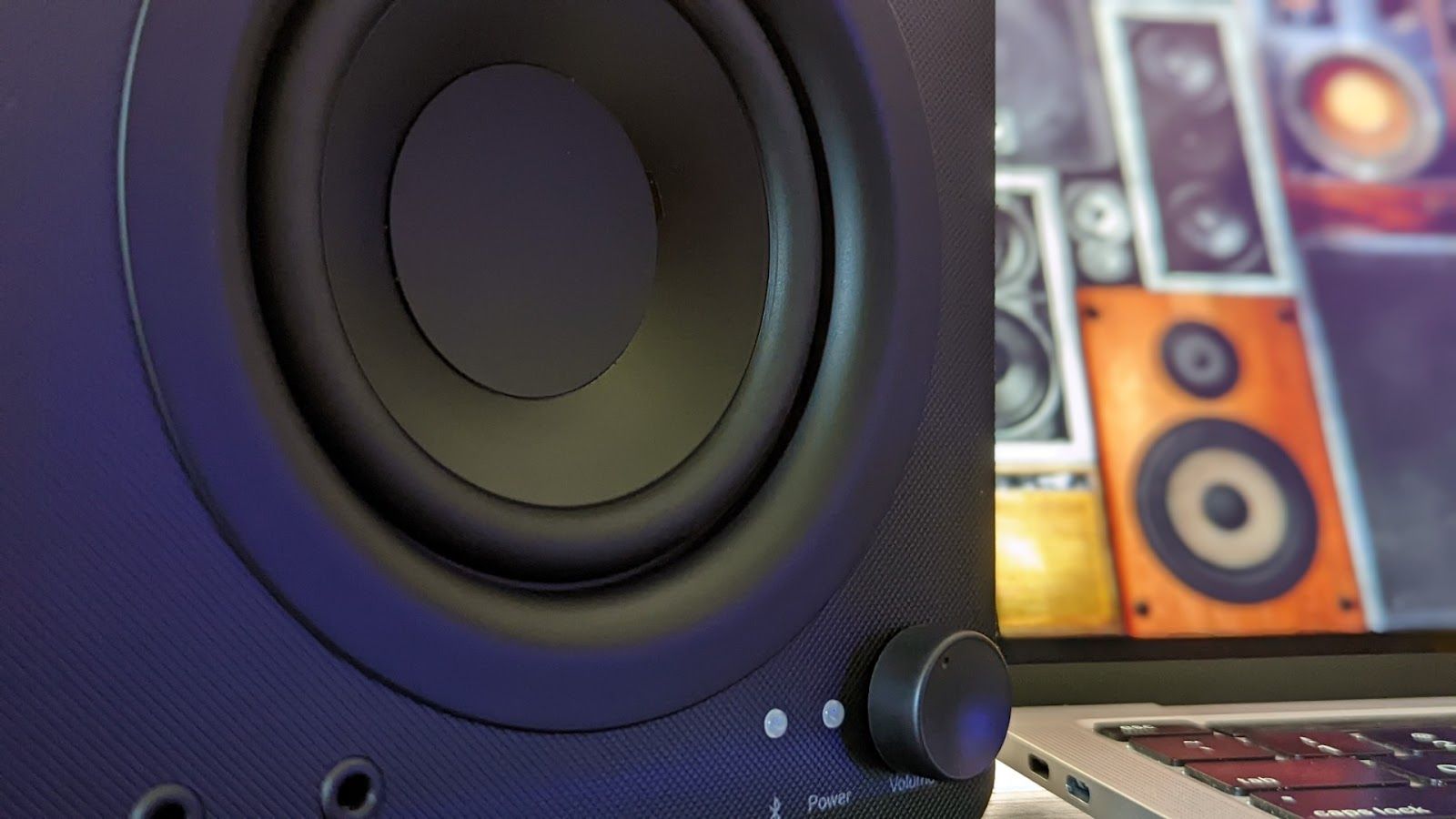 The DT-3BT studio monitors were put through a series of tests for this review. Typically I run all speakers through a series of frequency tests to see where the problem areas are. In the case of the DT-3BT, they handled all of the upper-frequency bands like a champ. No issues or noise was present.

The mid-range frequencies faired just as well with everything coming through clean and clear. In fact, I was impressed with the mids as they handled some of the more common ‘trouble’ frequencies (usually around 600Hz and 1000Hz) exceptionally well.

The low-end frequencies faired decently though I did note a bit more noise on the low end. Nothing that caused major concern. Of the three ranges though I would say that the low-end is the weakest when it came to this test.

I also like to run the speakers through a series of song arrangements over a wide genre spectrum to see how well they handle a variety of sounds. The DT-3BT handled all of the music well. Vocals came across as crisp and clean, sounds were distinct in the mix and produced a fairly flat profile. No one frequency range was overpowering. In fact, the audio produced was quite impressive considering the cost when compared to other top brand studio monitors. 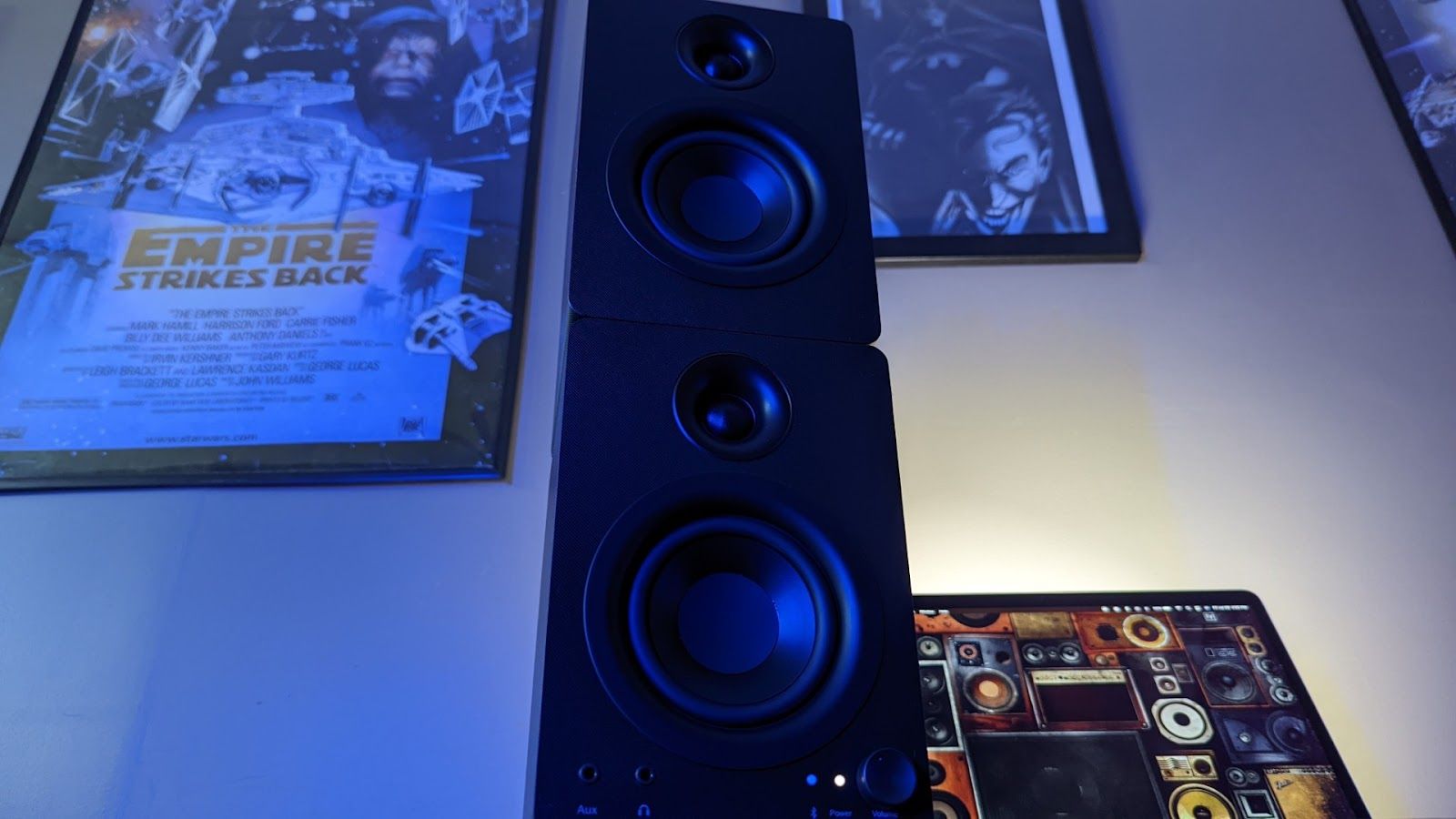 There is one small caveat though, and it comes in the form of the note I made earlier on the low-end frequency tests. Though it by no means makes the audio sound bad, I did notice that in every setting there was a lack of fullness to the low-end frequency bands when listening to music. It was still clean and things like drums and bass came through clear and distinguishable but there was a lack of punch that is present in some of the other monitors I’ve tested.

Understand that I’m not talking about crazy bass-boosted sounds here. In fact, when mixing the last thing you want is overpowered subwoofers muddying up the mix. However in the case of the DT-3BT, the low-end seems a little weak and results in a sound that isn’t quite as full as I’ve heard in other studio monitors. It still sounds exceptional, especially when you consider the price, but it was something I noted when testing.

Another test that was run on the DT-3BT was a simple metering test. Essentially I turn the speakers up to the point just before distortion to see how well the monitors can handle the increased volumes. The DT-3BT actually impressed me here. They were able to sustain about 75-80dbs consistently without the amps generating distortion. This is an impressive feat considering how compact the woofers and tweeters are. 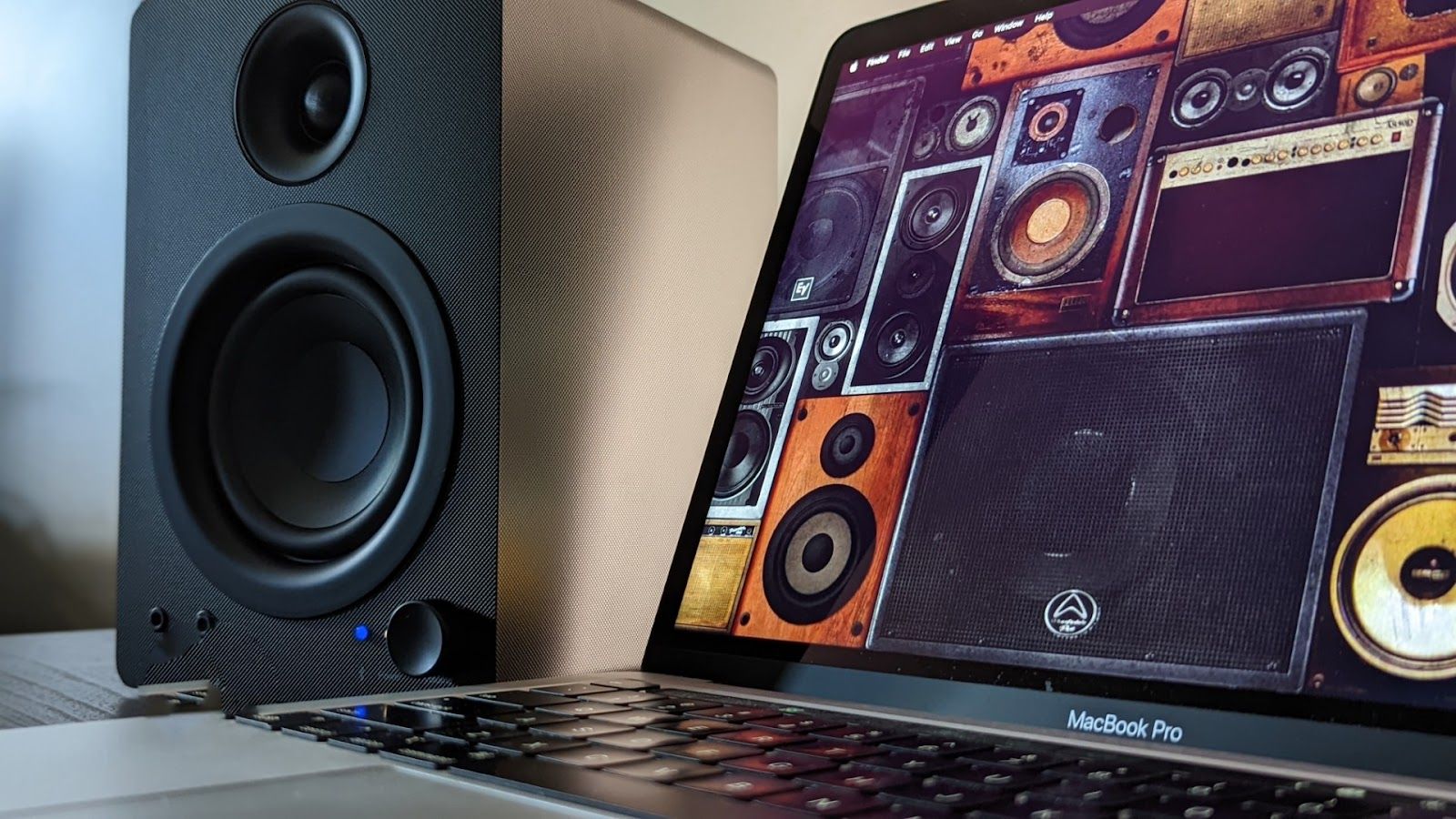 Since the DT-3BT comes equipped with Bluetooth I ran a few tests of range and quality. In regards to range, the spec sheet states that you can get up to 32 feet away and still maintain a connection. I found this to be accurate in my testing. What was more impressive though was that I had no line of sight as I went a couple of rooms over during the test. In regards to quality, I simply switched between BT and line connection while playing music. I have to say that I didn’t experience any major drop in audio quality. They sounded great using either connection. Also connecting to the DT-3BT is as easy as hitting the pair button on the back of the speaker.

The DT-3BT handled all the testing exceptionally well. I was impressed at just how well they maintained clean, crisp audio, especially with vocals. All the audio I ran through the monitors sounded great with minimal muddiness or distortion in the mix. The mix itself was pretty flat as well, meaning it represented well the original mix as it was intended to be heard.

The DT-3BT Multimedia Desktop Speakers from Monoprice are a seriously solid piece of technology. Built as an affordable, high-quality option for content creators, the DT-3BT doesn’t disappoint. A little weaker low-end holds them back from being the absolute best in class but I have no qualms about recommending these monitors to creators looking to upgrade their gear and get serious about learning to create great audio mixes. Priced at $99.99 the DT-3BT studio monitors would be a great addition to your setup.