The MMOMENTUM Pro MMO Gaming Mouse promises to offer a professional solution to those looking for a do-it-all mouse to incorporate into their gaming setup. Does it deliver on this promise? Well, it’s kind of complicated.

The Kaliber Gaming MMOMENTUM Pro MMO Gaming Mouse (holy mouthful batman) made by IOGEAR has scrolled onto the scene as an option for fans of both the MOBA and MMO genres. On paper, it’s advertised as having 12 programmable buttons, up to 16,000 DPI, the all-too-popular RGB undermouse lighting, and being flexible for both work and play. Typically, I use my Logitech G600 mouse for all my gaming activities. It has been pretty faithful and comfortable to use throughout all of my MMO, MOBA, and FPS games, so I was interested in seeing how the MMOMENTUM mouse could simplify and improve my gaming sessions.

Customization and comfort are two features that I look for in gaming mice (especially those claiming they’re a “professional gaming mouse”) when trying to pick my next upgrade. Though I have smaller hands, I’ve been using 12 button gaming mice for years, and have the added practice of playing both piano and guitar. I don’t say this to flex my musical abilities, but just to emphasize that I’m pretty used to having to stretch my fingers and engage other typically dormant hand muscles. However, during the weeks of testing the MMOMENTUM mouse, I couldn’t help but feel something was off. There was a constant state of discomfort that I couldn’t shake until I placed my usual mouse beside IOGEAR’s.

At first glance, the bodies of both mice look to be about the same length. However, the MMOMENTUM mouse’s 124 mm (4.8 in) length is slightly longer than that of the G600 at 118 mm (4.64 in). This means that the palm is pushed back just enough to cause some strain- or it did for me. 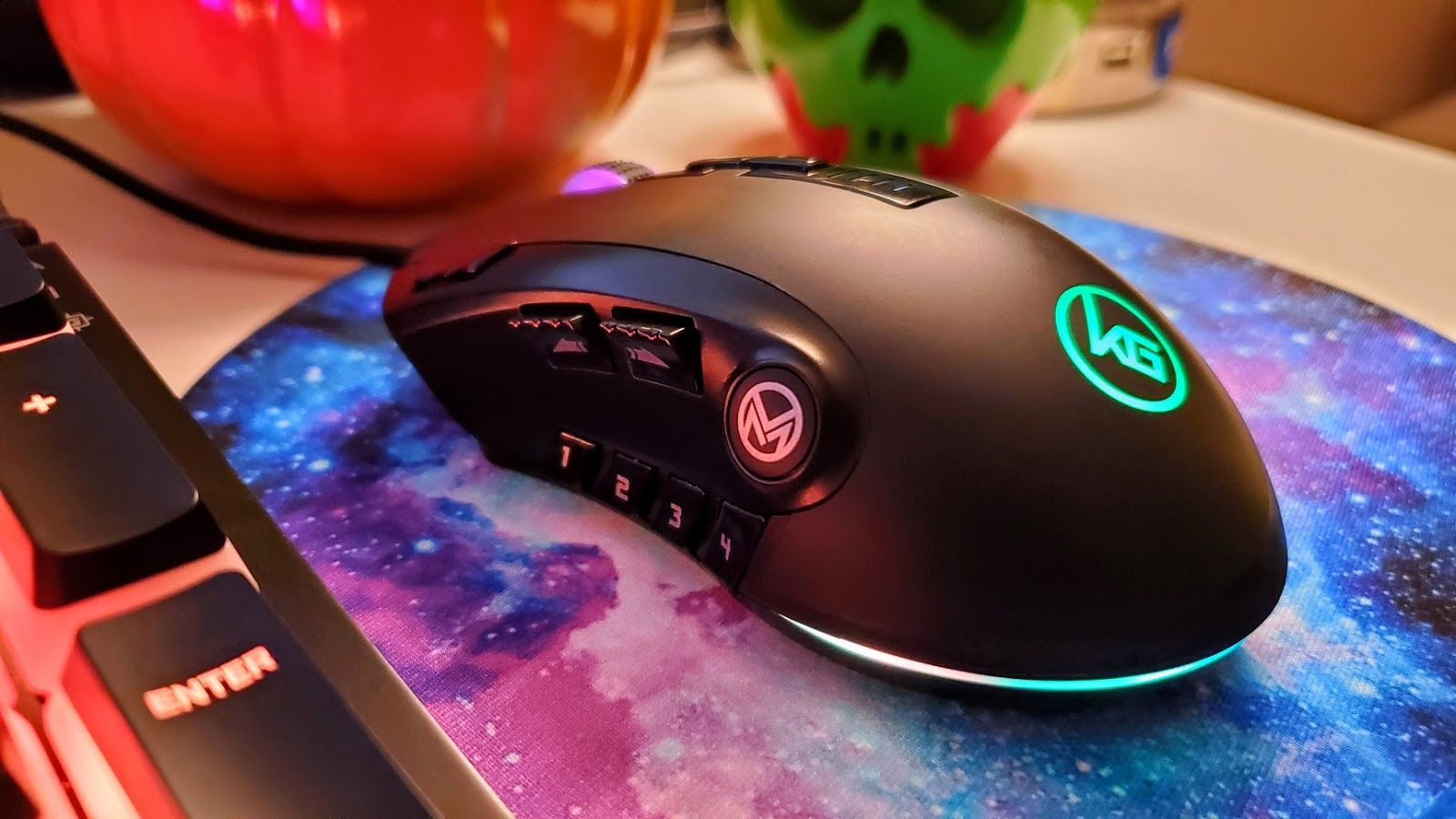 Upon examining the mouse body further, I think some of my discomfort may have had to do primarily with the type of grip I use while gaming. As a palm grip user, I definitely missed the slight lift in support that the Logitech G600 has, compared to the typical mouse body of the MMOMENTUM mouse. Just that extra bit of lift gave my palm enough support to allow my thumb more freedom to move without putting strain on the other muscles of my hands. If you’re a palm grip user like I am, this mouse can still work for you, but you may find yourself having to swap to another grip method if you start to feel some aches or tension. 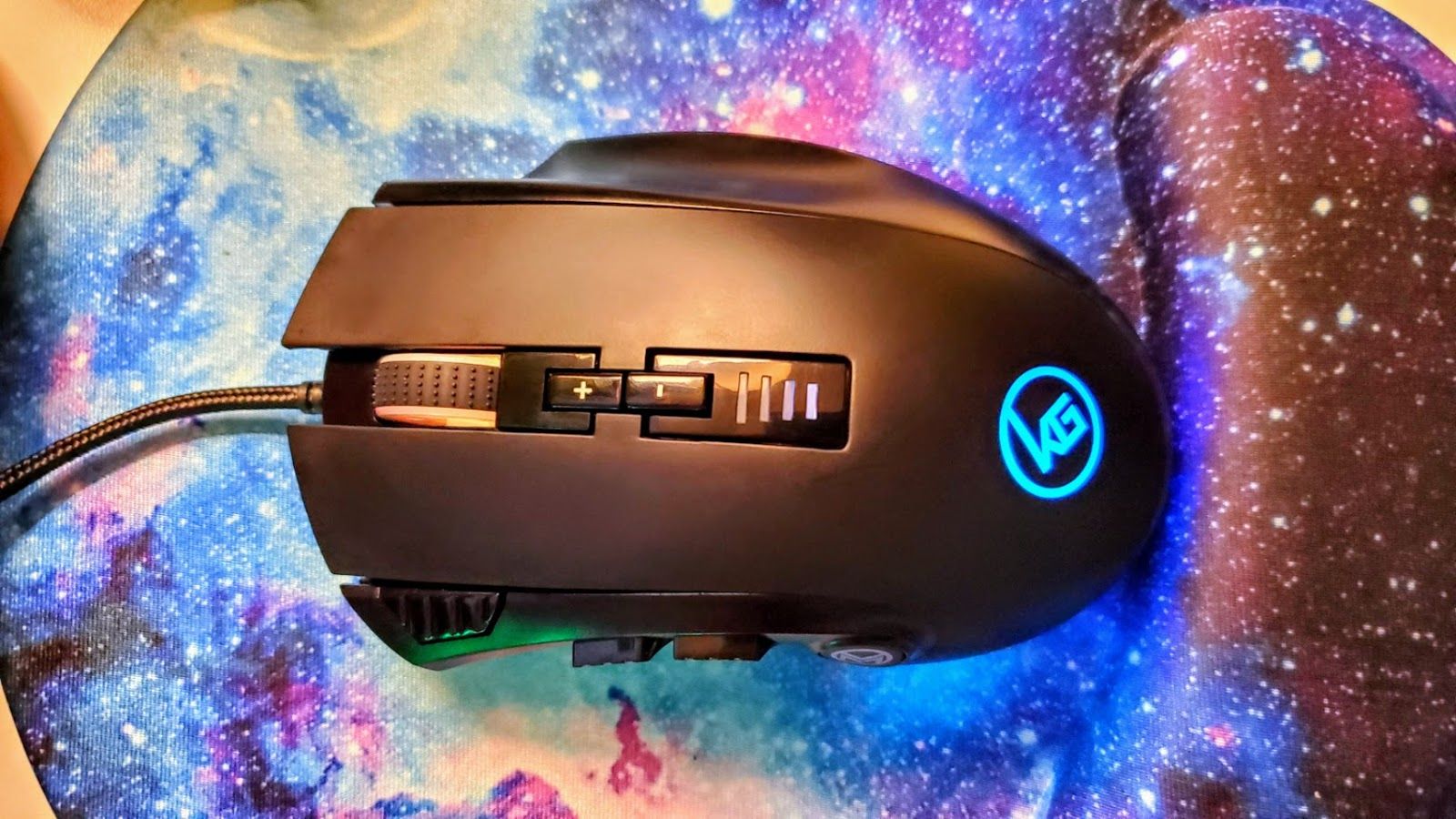 IOGEAR’s MMOMENTUM mouse doesn’t have all 12 buttons on the side like a typical MMO mouse. Instead, the MMOMENTUM mouse has four distinct, configurable buttons numbered 1 - 4 on the left-hand side of the mouse body that you’ll more than likely be using while playing League of Legends or Overwatch. The buttons are a bit lower than those on the Logitech mouse, making your thumb stretch ever so slightly more to reach them, as well as exert more force when trying to press the key. Moving back and forth between the two mice, I definitely felt more strain along with my other muscles tensing up to activate the buttons, as opposed to the Logitech mouse. There’s also a glossy coating over the buttons that makes a smooth transfer between pressing skills, but that also makes it easier to accidentally press the wrong key. I’m sure after playing with it enough, however, you could probably get used to just how far you need to adjust your finger movements to benefit from the smooth texture.

Not all that Glitters is RGB

Unfortunately for our lefties, the MMOMENTUM mouse isn’t ambidextrous, and there probably isn’t any way to use it comfortably if you aren’t right-handed. There is a pinky rest on the right side of the mouse body that definitely prevents it, but that didn’t end up benefiting me much, as it felt much too low to provide any real relief. The more I used the MOMMENTUM, the more I found that it had a lot of promise, but just slightly missed the mark. It probably sounds like I had an awful time with this mouse, but the whole experience wasn’t mediocre. There are several things that I really liked about this mouse.

For example, who doesn’t love pretty RGB lights? I’m sure there are some gamers out there who are sick of it by now, but I’m still just as easily amused. The programming software does a great job of letting you customize the lighting and button mapping, but I was pleasantly surprised to see that the scroll wheel and logo also lit up. You can also adjust the brightness, speed, effects, and program-specific colors to cycle through. Unfortunately, this software only works for Windows, and though you can still use the mouse on Mac, it starts to feel a little overpriced if half of the features are uncustomizable or unusable without the software. 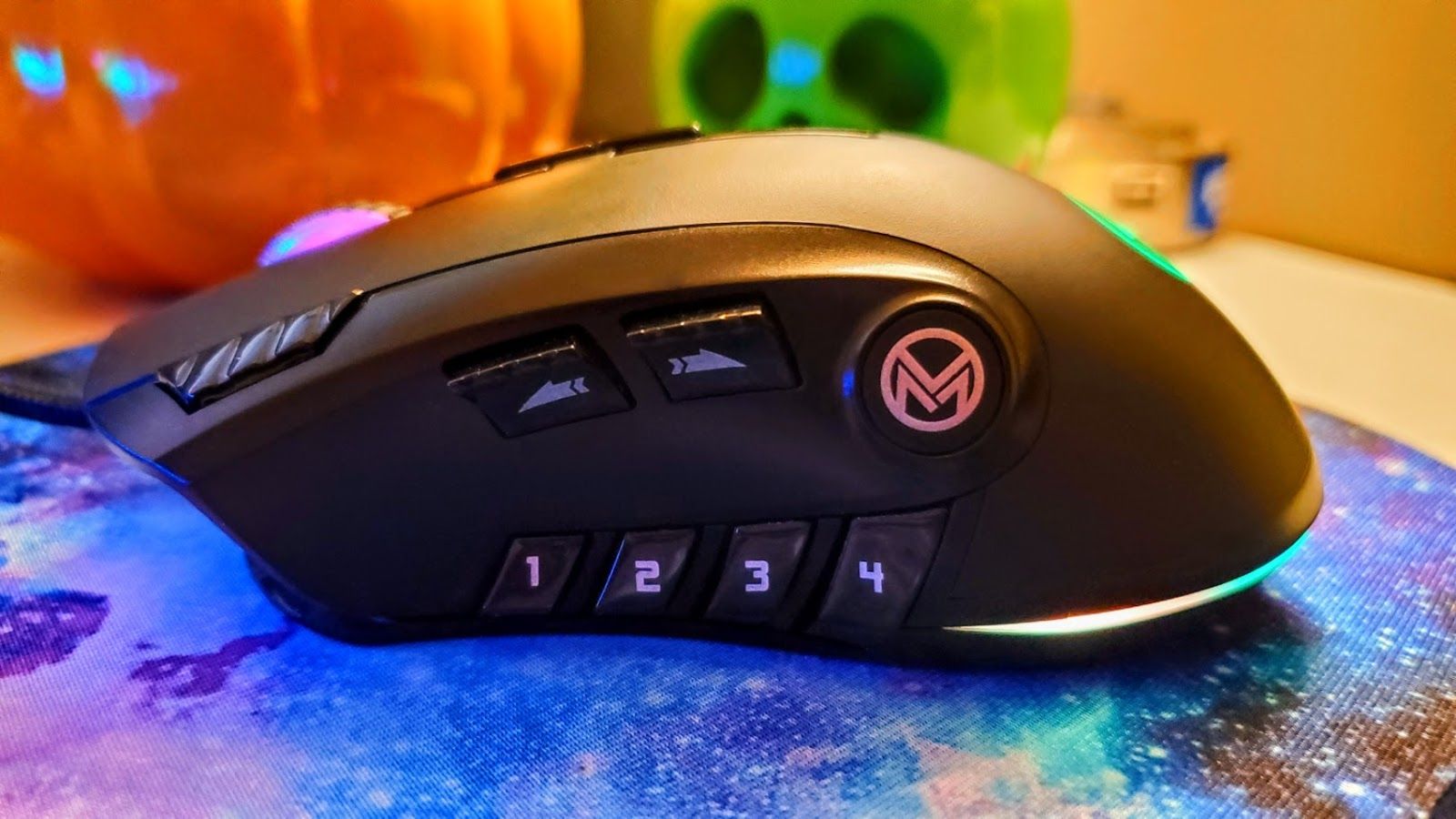 Speaking of which, the scroll wheel actually has a pretty great covering. While it doesn’t have a satisfying infinite scroll, the scroll wheel does have a rubber coating with ridges to allow for steady precision scrolling. Since IOGEAR claims that the MMOMENTUM mouse can be used for both work and play, and I have to scroll through endless PDFs on the regular, I was able to test the scroll wheel during periods of long use and was fairly pleased with the grip.

The adjustable weights are also a nice feature that allow you to customize your playstyle even further. Personally, I like my mouse to have more weight because I feel like I have more control, so I left them in. However, like with most mice, the weights are extremely small, so if you take them out I hope you have a reliable place to store them.

Despite the issues I had with button placement, I was impressed with the durability of the button life. At 20m clicks, the MMOMENTUM mouse actually has a longer life expectancy than some higher-end gaming mice I’ve used. So if you use a claw or tip grip, you might enjoy entering into a long term relationship with this one.

Will the MMOMENTUM Pro Gaming Mouse be replacing my current setup anytime soon? Probably not. For MMOs that have several skills and hotbars, I still prefer to have all my buttons on the side of the mouse, and those I did have access to on the MMOMENTUM mouse just didn’t perform as I would have liked during MOBA matches. I never felt 100% in control of my actions and was constantly worried about pressing the wrong buttons by accident. It felt like this mouse had a lot of potential, but the ergonomic body just felt slightly off for me.

As a mouse that was looking to cover several bases, I’m a little disappointed that it didn’t feel as good for someone using a palm grip, since that grip seems to be the most widely used. As a general gaming mouse, it could still probably work well for folks that use other grip types and have ample time to get used to its strange button layout. For the price, and as a professional gaming alternative, I can’t shake the feeling that IOGEAR might have just misclicked the mark.