Working from home and looking to take care of your hands while also doing a little gaming? The Mistel Barocco MD770 may be the keyboard you’ve been waiting for. Featuring a 75% layout that keeps the function row, arrow buttons, and your navigation intact, it offers full programmability, genuine Cherry key switches, and the responsiveness games demand on top of an ergonomic split that lets it double as a keypad. Sound interesting? Join us as we take a closer look. 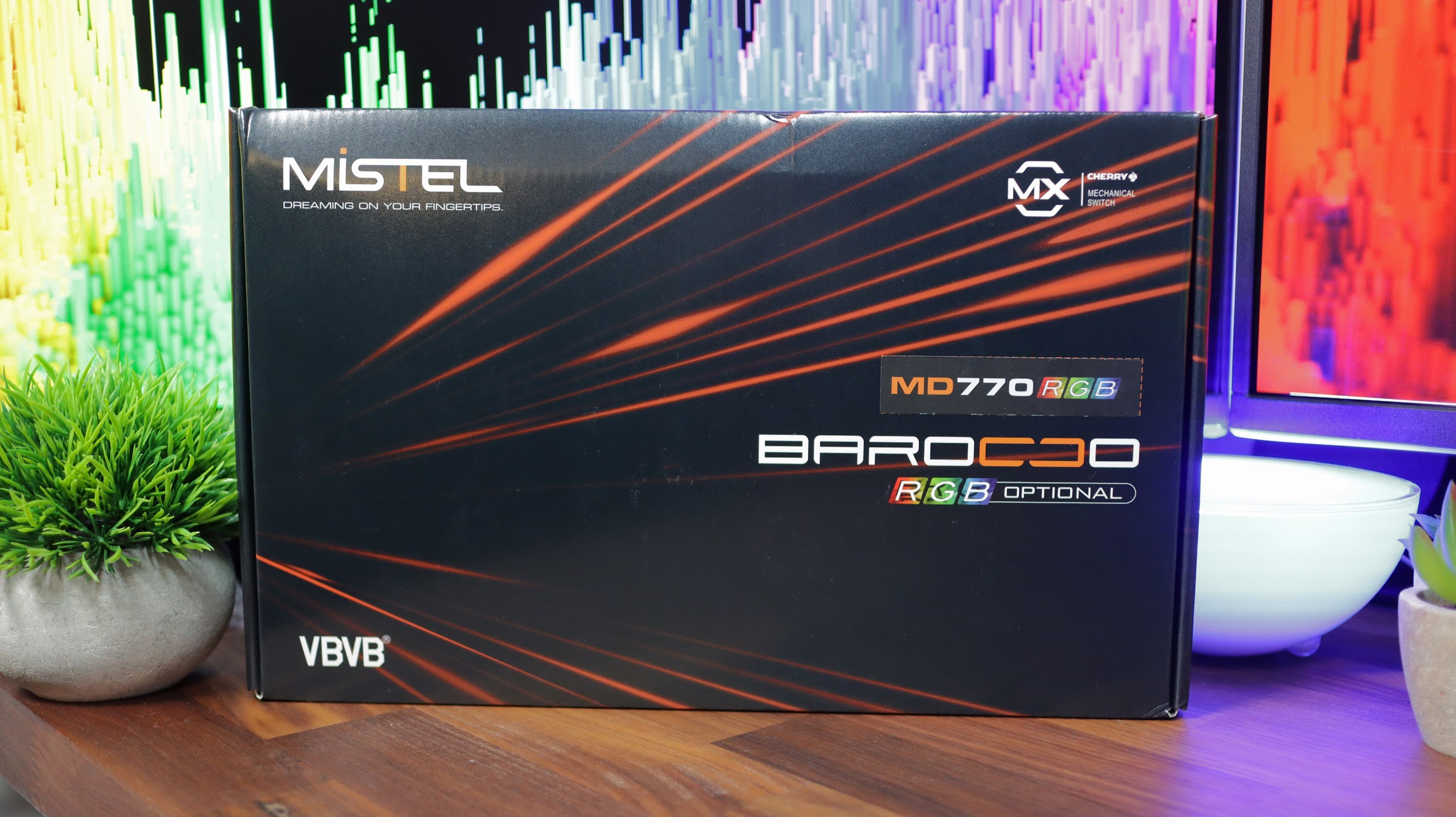 If you’ve been following my reviews for any length of time, you’ll know that I have a special place in my heart from mechanical keyboards. In fact, one of my very first reviews here was for the Roccat Ryos TKL way back in 2015. Fast forward two years, and I was beginning to explore forums like GeekHack and /r/mechanicalkeyboards. That’s when I discovered the first Mistel Barocco MD600, a split keyboard that was fully programmable without software, had PBT keycaps (something I was just beginning to appreciate), and could easily double as a macro pad for MMOs. What wasn’t to love?

For a lot of people, it was the form factor. When that keyboard released, gamers weren’t sold on compact 60% keyboards the way they are today. Even in the comments section of that article, people noted the lack of function keys. For some gamers, that’s a big deal, especially if you’re used to binding shortcuts and macros to them. The problem is a thing of the past.

Today, we’re looking at the latest entry in the Barocco series, the MD770. It boasts all of the same features that made the MD600 so interesting while expanding to a full 75% format. That means it has a full function row, arrow keys, and the navigation and editing keys while still maintaining a compact form factor. Add to that the software-free programming, doubleshot PBT keycaps, gorgeous lighting, and ergonomic split that’s perfect for gaming, and you have one compelling keyboard. 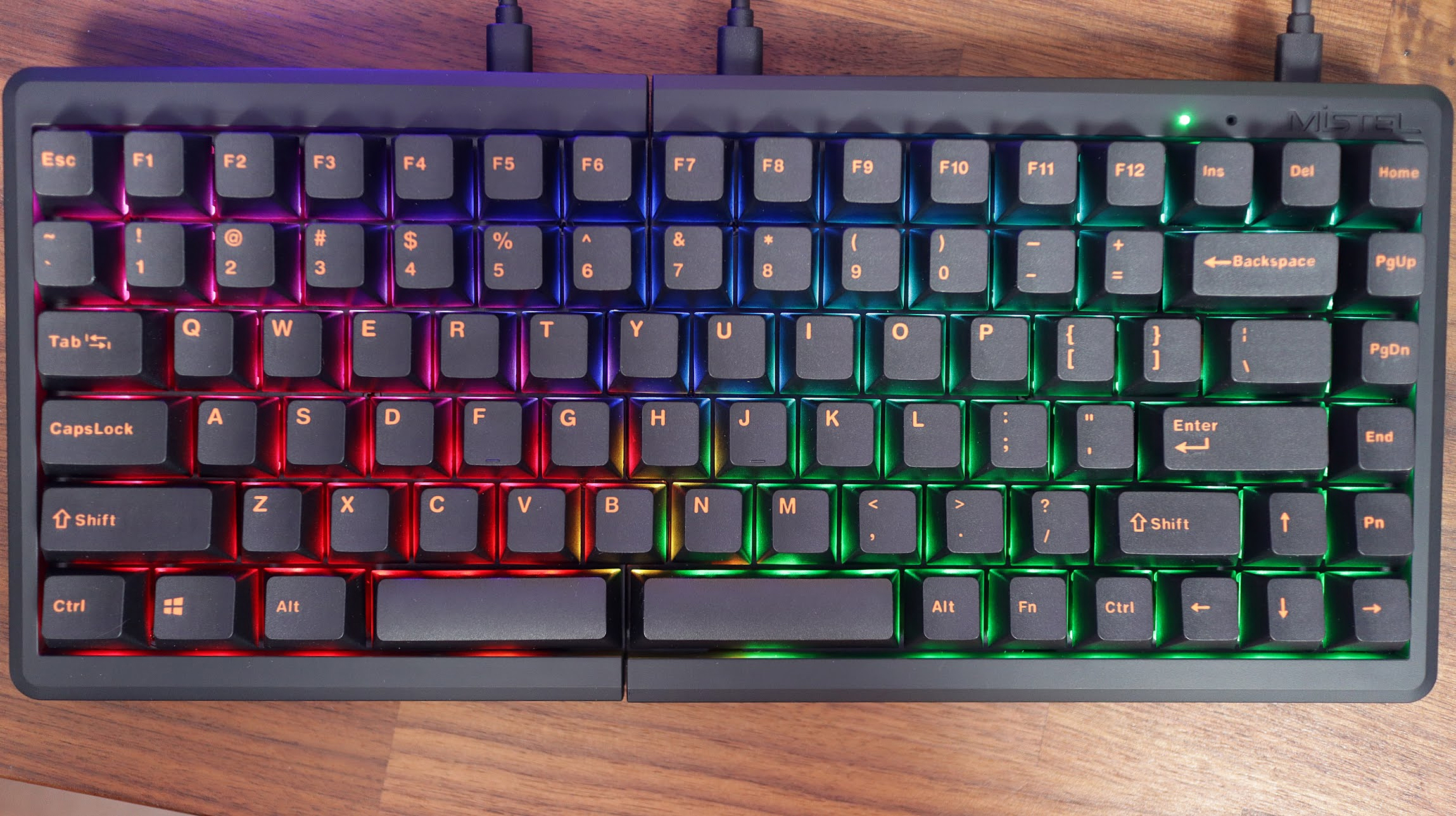 The MD770 arrives in a box that almost feels too small for a keyboard. That makes sense, though, because at only 12.6 inches long, it’s substantially smaller than even a TKL, which chops off the number pad. The Barocco is much closer to a 65% keyboard — which is pretty much exactly what it is, just with the function row up top. Despite its small size and plastic frame, it has a good heft to it thanks to the internal mounting plate. It stayed in place just fine on my desk and never flexed under normal typing.

The frame is fairly compact. It has narrower bezels on the sides and is only slightly thicker on the top and bottom. It feels very minimalist and saves six inches of desk space compared to my full-size Corsair K95 Platinum. For gaming, it’s perfect because you can position your mouse closer to your left hand in a more natural position. This is especially true if you get rid of the right half of the keyboard and use it as a macro pad. 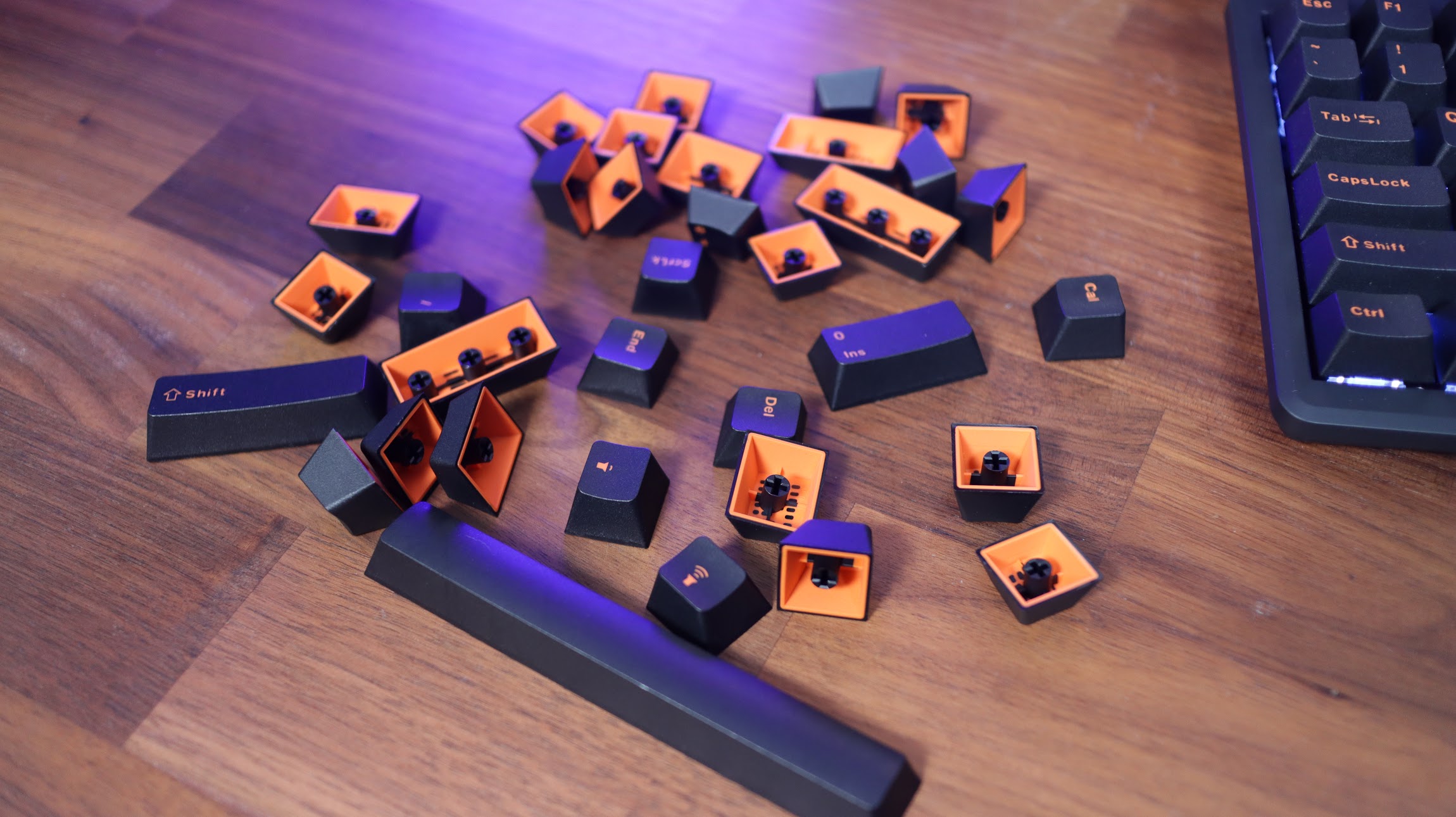 I have to say, I love the black and orange look they’ve gone with here. Maybe it has something to do with my grade school mascot being a tiger, but I think it looks great. What’s even cooler is that Mistel has included the remaining keycaps to deck out a full-size board right in the box. That’s a major nod to the enthusiasts who will be picking the MD770 up and repurposing the keycaps down the line. 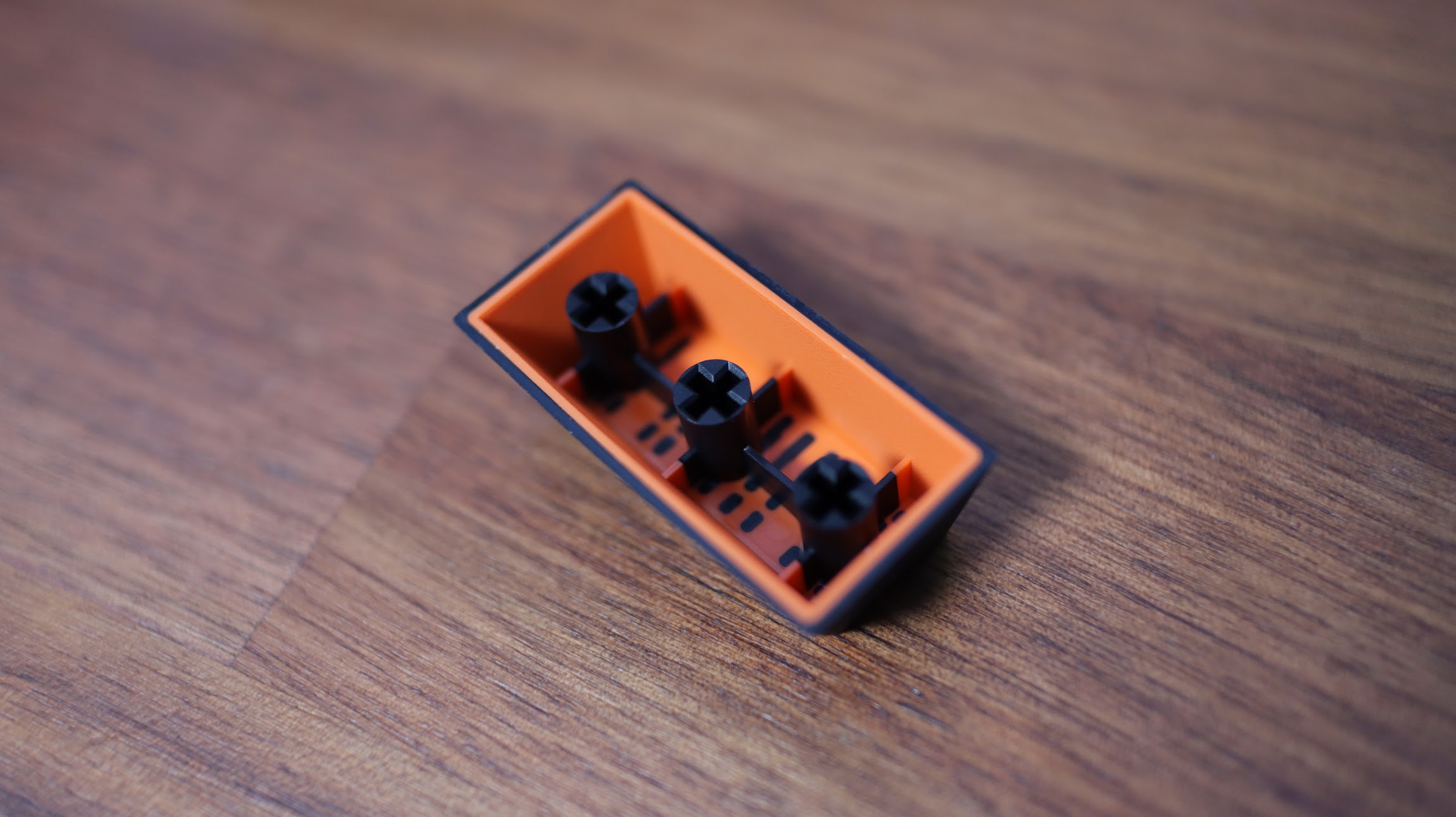 The keycaps themselves are phenomenal. They’re doubleshot, which means that the legends are made with a second piece of plastic bonded to the first. Since they’re such different colors, you can easily see how it comes together in the picture above. That means that the legends will far outlive the keyboard itself and will look just as good in ten years as they do today. The keycaps are also made of PBT plastic, so they’ll neve shine, and have nice thick walls that offer a solid, satisfying typing experience. 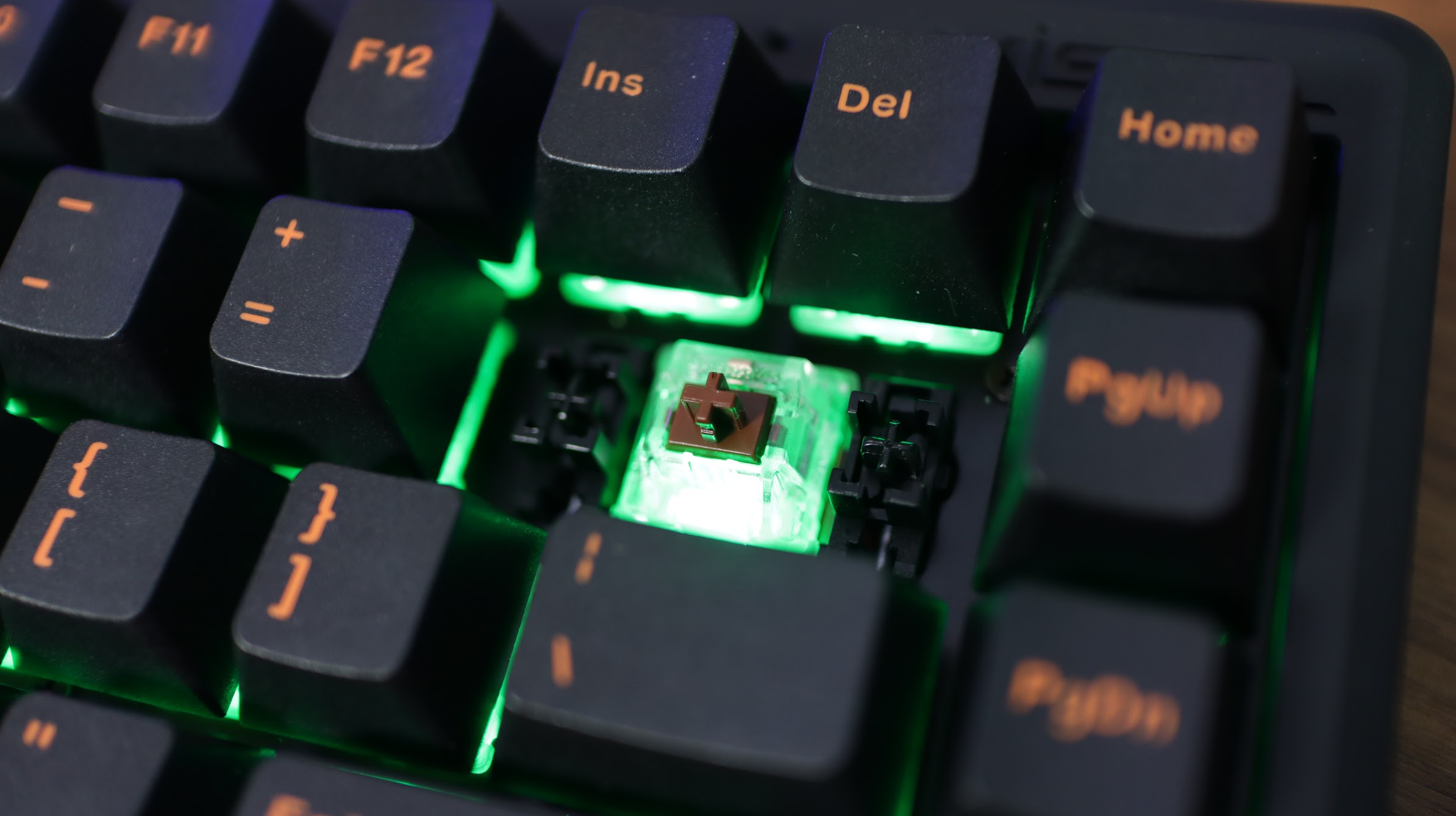 Underneath those keycaps are genuine Cherry MX key switches. My sample was sent with Cherry MX Brown. Cherry has developed a reputation for consistency and quality that’s hard to argue with, even as competitors offering better and better options. You have your choice of Black, Red, Blue, Brown, or Silent Red, so your major bases are covered. I would have loved to see some other switch options, such as Cherry Clears, but perhaps those are choices that can come in the future.

Typing on the keyboard feels good. The construction of the body makes bottoming out feel solid without any annoying reverb or spring-ping. The keys have a light and clicky sound profile, which I find very satisfying. Since I chose Cherry Browns, there’s a lightweight tactility that I very much enjoy and doesn’t tire my fingers out after a full day of use. They’re also a great middle ground between a gaming and writing switch.

The only thing I was unhappy with was the stabilizers. The stabilizers themselves are only decent and have a lot of rattle, especially on the dual space bars. I was able to reduce this by adding a bit of dielectric grease on the stabilizer bars, but since the switches are soldered in, completely removing them wasn’t an option. 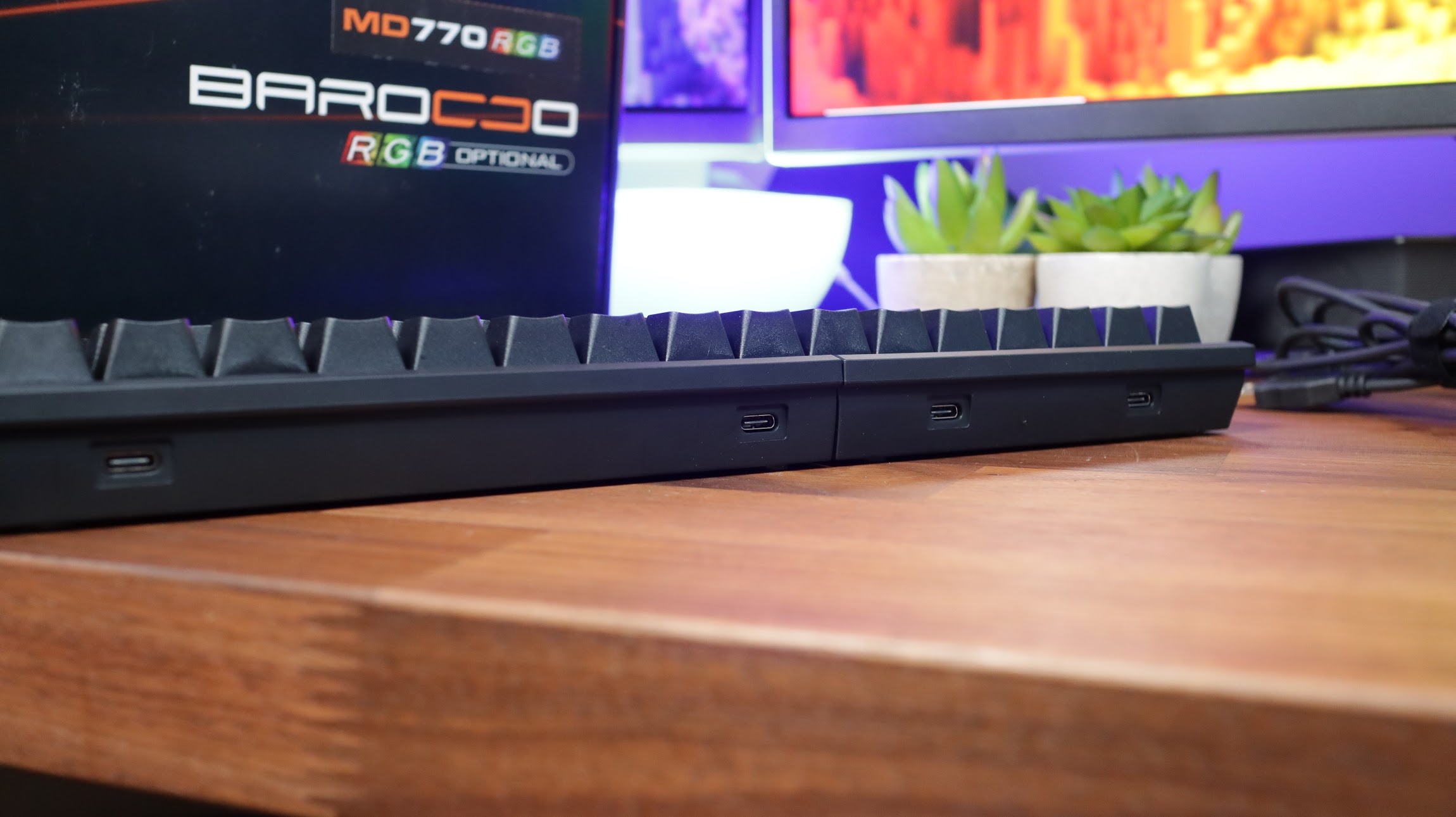 Turning to the back, you’ll find that there are no tilt feet. Instead, you’re given four screw-in feet in the box and can use these to “tent” each side or tilt as normal. I opted to tent each half by tilting back from the split in the middle. By splitting and tenting, you can reduce pronation and ulnar deviation, the two key components to carpal tunnel and other repetitive stress injuries related to long hours at a keyboard (guilty!).

On the back edge, you’ll also notice four USB Type-C ports. The outer ports on each half are for connecting the PC to your computer. You have the option of connecting to the right side to power both halves or the left side when you only want to use it as a macro pad. The two inner ports are for connecting the halves with a shorter coiled cable. It sounds like a lot, but it really isn’t thanks to how tight that inner coil is. It winds up feeling substantially cleaner than the original MD600.

One of the biggest selling points to this keyboard is how programmable it is. Using a PN combination, you’re able to swap between four layers of key commands. Think of each layer as a new keyboard; a blank slate, if you will. The first layer is stock. You cannot change it. The other three layers can be remapped, tied to macros, given custom lighting, or assigned media keys.

Unlike most keyboards that offer onboard programming, it even lets you record sequence macros with timing delays. So, let’s say you want to send out “123” with a 150ms delay before the 3. You can do that by tapping in FN+T to add 15ms intervals. This is great if you’re running short sequences and need to wait for a cooldown.

Where this really begins to shine is when you use the keyboard for specific games or as a macro pad. Using the onboard programming you can map all of your most used commands and shortcuts to the left side, and then disconnect or move the left side out of the way. It really makes the MD770 a two-in-one type of device.

You can also control all of the keyboard’s lighting using key combinations. There are several presents, including the expected rainbow wave, reactive typing, and breathe effects, but you can also set a custom color for static or breathing options. I wish Mistel had gone a step farther and allowed you to customize each key or offered an optional software package to unlock the potential of the lighting.

Is a Split Keyboard for You?

A split keyboard can be a bit daunting. For many of us, it’s a pretty foreign concept. Yet, for years, we’ve known that separating your hands more was a healthier way to type. How many of us have typed on some version of Microsoft’s Ergonomic Keyboard over the years? A full split is the next step beyond that and is objectively better since you can customize the distance and angle.

That said, it reveals bad habits you’ve learned in your typing. Since the keyboard is literally two pieces, you may find yourself reaching for a key with one hand only to find it’s not there. For me, it was B and Y. This does get better over time, but don’t dive into your first split expecting to type at full speed without at least a few days of practice.

Once you get used to it, the Mistel Barocco is honestly much more comfortable to use than a traditional keyboard. It may not look like it at first, but being able to keep your hands in a resting position while typing  has real benefits. My wrists no longer get sore after several hours of writing. The experience of using the keyboard just feels more natural and easy.

Plus, the two sides fit together snugly, so it’s easy to go back and use it as a normal keyboard if you discover it’s not for you.

If you decide to use it as a macro pad, I would advise not disconnecting each half. The right side houses both the lighting controller and the PN and FN keys. If you disconnect that side, the lights turn off and you’re stuck on a single layer. Thankfully, the cable connecting the halves can stretch a good two feet, so it’s easy to get out of the way.

The Mistel Barocco MD770 is a solid evolution of what they began with the MD600. Adding in the function row and other keys makes it more useful for a wider array of gamers, and, even if you don’t need the function row, when used as a macro pad, it puts an additional six programmable buttons at your fingertips. It’s not all about gaming, though, and even keyboard enthusiasts will find a lot to love here with these excellent keycaps and onboard programmability.