With so many options for recording available today one of the first questions that you have to ask is, “what are my recording needs?” For a streamer, it's typically simple: a good microphone, dynamic or condenser, USB or XLR, and a pair of headphones. Content creators often have more advanced needs, and if you’re working with 3D content or live event recording, more advanced still. If you find yourself in that camp, then miniDSP might just have a solution for you with its AmbiMik-1.

The AmbiMik - 1 is an ambisonic microphone for professional recording but with the enthusiast in mind. No need for external preamps, analog to digital converters or extra gear. The AmbiMik -1 is all this in one simple USB powered mic. With such a promise, however, comes a pretty high expectation. So does this all in one solution manage to bridge the gap between studio-level recording and enthusiast content creation? Grab that coffee, kick back and find out with our review of the MiniDSP AmbiMik-1.

Say Hello to My Little Friend

Built from the ground up with portability in mind, the AmbiMik-1 is tiny by industry standards. The whole mic weighs just 130 grams and fits comfortably in a laptop bag. The body is built from aluminum with a gunmetal finish. The top of the mic houses 4 low noise cardioid capsules that are nestled in behind a blacked nylon protective frame. The whole unit comes with a nice fur windscreen to help further reduce air movement in and around the pickups as well as a table tripod stand for easy setup.

The microphone is compact, sleek and ready to go out of the package. Its body is solid and feels durable to use. The cardioid capsules as well are exceptionally well crafted (more on those later) and are firmly secured on the top of the mic. Even the fur windscreen and simple table stand are both well constructed and durable. The nylon protective frame is another story. 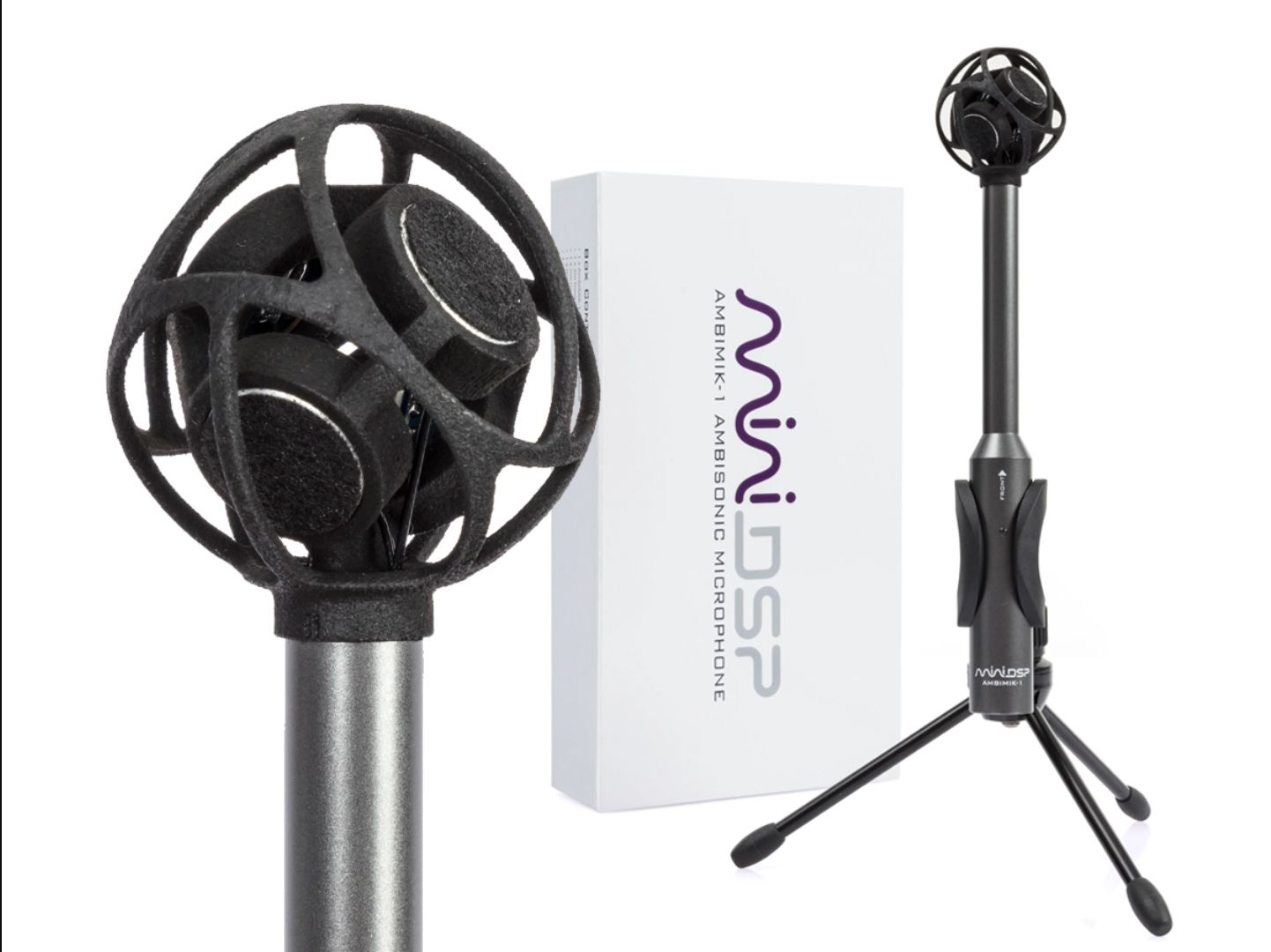 Unlike the aluminum body and mic capsules, the nylon cage that sits on top feels flimsy to the touch. In fact, more than once I was concerned that even touching them would cause a break. When any amount of pressure is applied to it, it begins to buckle under the pressure.

It’s unfortunate really because the design of the protective frame is optimized to allow maximum sound pick up with little to no disruption while protecting each capsule. The nylon material makes this whole frame feel pretty useless. What is otherwise a rugged recording device requires a tender touch so as to reduce the chances of breaking that frame and by extension the capsules it protects. All of this is okay if the mic is permanently mounted in a recording studio but it works against the ‘mobile’ nature and design of the AmbiMik-1.

The AmbiMik connects to a PC, Mac, Linux, Android or iOS device via the provided USB cable ( an adaptor is required for Android and iOS and is not provided). In the case of the latter three, the whole setup is driverless; simply plug it in, open your recording app and go. Mac and Windows users will find a much more involved set up waiting for them but with that comes much more by way of options.

MiniDSP offers driver packs for both Mac and Windows users as well as a great VST plugin powered by Dirac Research. If you’ve not heard of this company check them out online but suffice it to say that they know how to set up audio. After a quick driver install you’ll be ready to set up your first recording project. 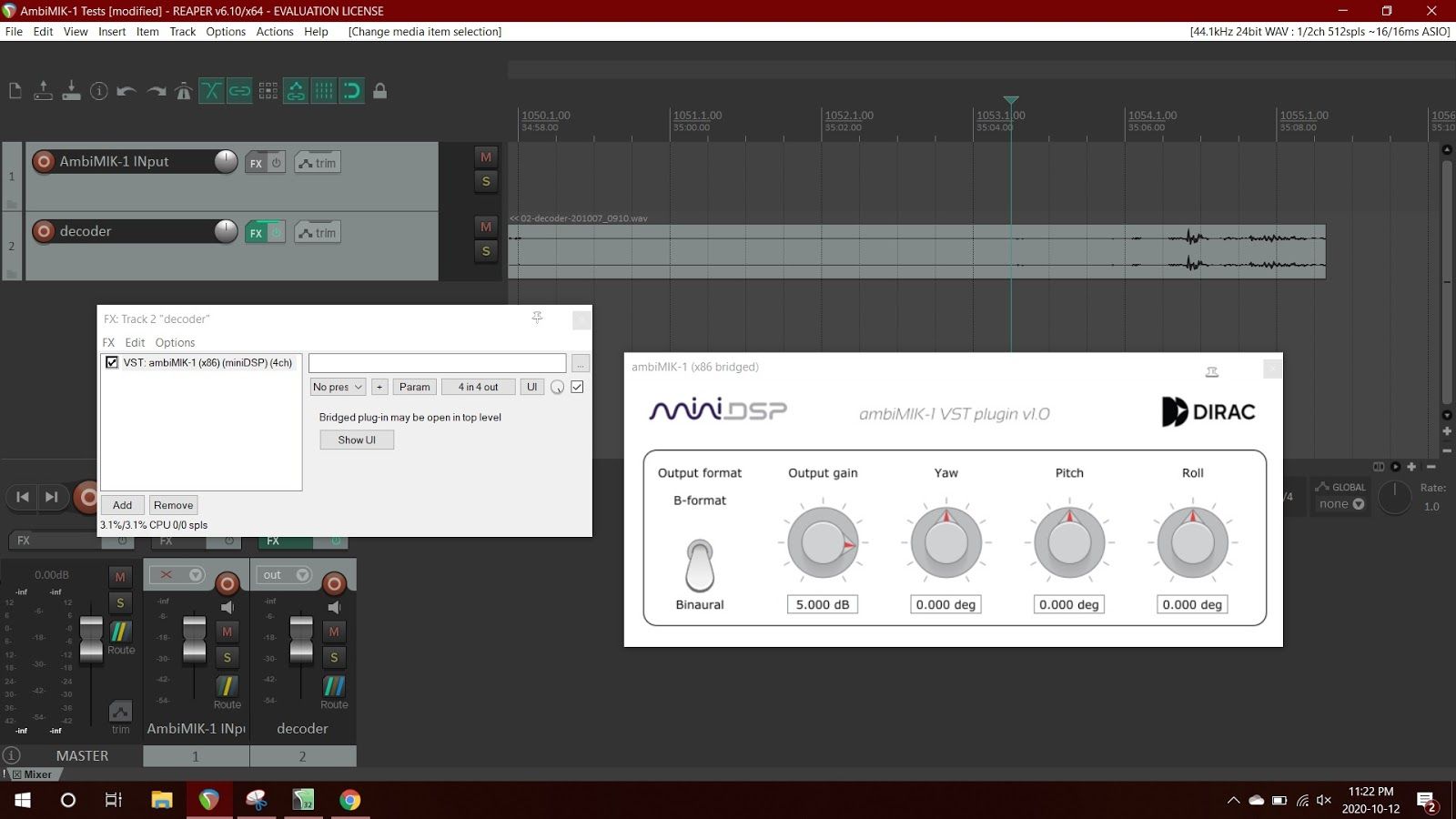 This is where things can be a bit of a challenge for those new to a professional audio recording setup. Unless you’ve had a lot of experience working with DAW (digital audio workstation) editors, setting up the AmbiMik-1 is going to be a bit of a learning curve and crash course all at once.

Unlike standard USB mics which are typically a point and go affair, the AmbiMik requires installation of the VST plugin and then some very specific channel routing to maximize the mic’s potential. If you’ve managed a multi-mic recording session for music or podcast then most of the process will feel familiar to you. If, however, you’re new to the whole process then it will probably feel a bit overwhelming. However, if you’re willing to learn and go through the process of configuration, the AmbiMik-1 will open up a whole new level of options for recording and content creation.

As much as it may feel like a task to get the AmbiMik-1 up and running, this pales in comparison to what you can actually accomplish with it. MiniDSP has created a mic that packs two different modes of capture into a single mic. On that surface that might not sound impressive considering we’ve had condensers that have been doing that for years. However, it’s the modes that the AmbiMik-1 can capture that are truly impressive.

The first recording output mode is Binaural Audio. Binaural audio capture is traditionally a system that relies on two microphones to capture a 3-D stereo experience. It essentially attempts to capture sound the way we as humans hear it. Interestingly this can really only be sampled while wearing headphones. In the case of the AmbiMik-1, the mode utilizes all four mics to create a truly immersive experience. In essence, it uses the 4 mics to capture a 360-degree sound sphere. It accounts for distance from the source as well as relative position to the mics. This results in a ‘true to life’ audio capture which simulates what it would be like to be in the space that was captured. Check out this video link for more information.

The AmbiMik does an exceptional job at this. Placing the mic in the center of a recording space (in the example below it was dropped into the middle of a circle of people doing a podcast), it was able to capture all of the different inputs while maintaining their position and distance from the mic. The result is fairly true to life audio capture experience. The capsules are exceptionally sensitive and, despite the white noise you hear in the background of the audio clip, did an exceptional job at filtering out much of the background noise.

Ideally, this recording style would be best suited for a studio setting where there is much more control over the environment. In the case of the recording below what’s impressive is how well it was able to determine and capture the position and distance of the sound sources. As noted earlier in order to hear this distinction you will need to wear headphones.

The second recording output mode is B-Format. B-format is designed to actually compensate for the capsules’ various distances from audio sources. This in turn allows you to capture the audio as four distinct “microphone” signals and actually equalize the audio captured between the separate capsules. It sounds a bit complicated on the surface but essentially it allows you to capture adjustable 3D audio. For more information on B-Format output check out this resource.

This becomes relevant to content creators who like to film in 360-degrees, audio engineers, or game designers, particularly in the VR space. The B-Format output allows you to sync the audio to the video experience so that when the viewer interacts with the video by moving the camera or turns their head in the case of VR, the audio can adjust on the fly to match the relative position of the viewer. Again what is so impressive here is that what has traditionally required a fairly complex setup, with preamps, separate physical XLR connections and a host of other pieces of equipment, has been refined to one mic and a capture device such as a laptop or iPhone.

Both output modes worked exceptionally well for such a compact package. The low noise capsules did a fairly good job at filtering noise and the software-driven controls (installed with the base driver package) for gain, yaw, pitch and roll allow for some on the fly customizing to your capture.

In the case of the sample recording above, the room that this was recorded in is actually a warehouse with industrial-grade fans running in the background. The people involved were all over 10 feet away from the mic in various parts of the room. The fact that the mic could even make the distinctions as to direction and distance while capturing all while fans were running in the background is a testament to the quality of the AmbiMik-1.

The AmbiMik-1 is an impressive piece of hardware. Its compact design and robust capture capabilities make it a powerful piece of tech in the right hands. It's unfortunate that its weak nylon cage undermines its otherwise rugged design. However, the AmbiMik-1 is a very specific piece of gear designed for a very specific type of content creation. Unless you’re looking to get into 360° audio capture and willing to take on the challenge of learning some new things about audio recording, it’s not a piece of tech you’ll need for everyday streaming, gaming, or even most content creation for platforms like YouTube. For a professional or even high-level enthusiast, however, it is a great piece of gear to have in your kit for recording. While daunting for a newcomer, its setup isn’t terrible compared to a traditional ambisonic setup. If you’re the type of user who needs 3D audio capture, this is a good way to get your feet wet.

The product described in this article was provided by the manufacturer for the purpose of review.
7.0Good
Pros
Cons
Tags
microphones
Content Creation
miniDSP