For years, the Elgato Stream Deck has reigned supreme as the streamer’s best friend, but it was only a matter of time until another product came along and challenged it for the throne. The Loupedeck puts stream controls at your fingertips but adds a suite of plug-ins for creative apps that promise to speed up your workflow so you can spend less time editing and more time creating. It’s not limited to just creation, either, as you can quickly download custom profiles being shared by the community. At $269, is it worth a buy? 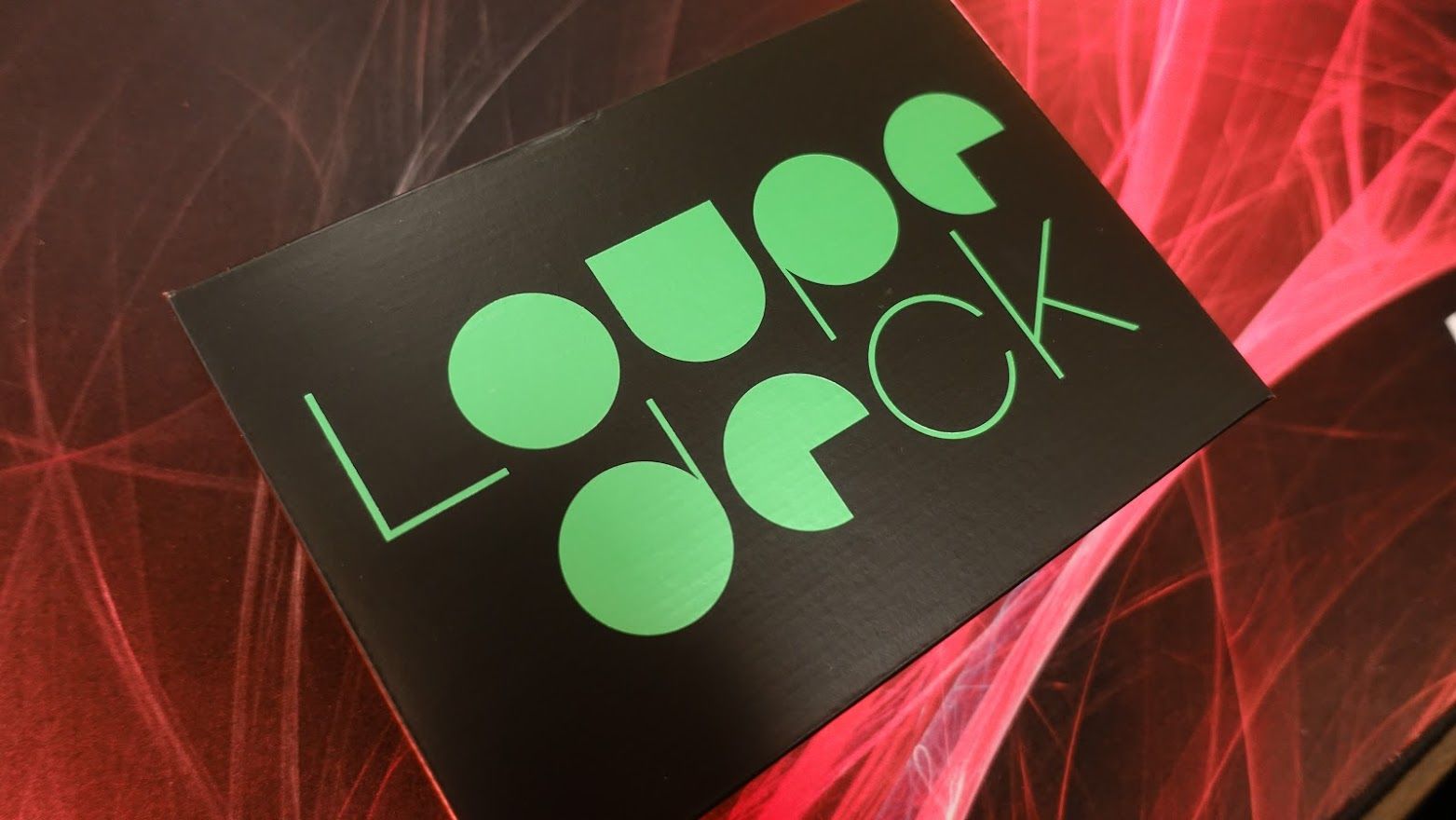 Loupedeck, the makers of the Loupedeck Live, is no stranger to the content creation game. Back in 2016, they launched the first Loupedeck to IndieGoGo. Back then, it was a much simpler product aimed specifically at Adobe Lightroom for photographers. The campaign obliterated its modest funding goal of $87.5K and received nearly five times its funding goal. The company has wasted no time iterating on its design, first with the Loupedeck CT released in 2019 and most recently with the Loupedeck Live we’re looking at today.

Each of these products has its own audience and unique feature set but one thing unifies them: they’re all aimed at helping creators do what they do faster than ever before. With the launch of the CT and the Live, the curtain was pulled back on a deep software suite that allows the devices to seamlessly swap between programs, expanding the possibilities beyond Lightroom to, well, just about anything.

Today, we’re looking at the Live, which is Loupedeck’s smallest device yet and is aimed at streamers above all else. At its core, it’s an input device: a mix of buttons, knobs, and a touch screen. What makes it useful is its ability to adapt to different pieces of software and to be completely customized to put different shortcuts at your fingertips. With the Loupedeck Live, you can control your stream, cut videos, edit photos, control your music, and more without ever needing to take your right hand off the mouse. 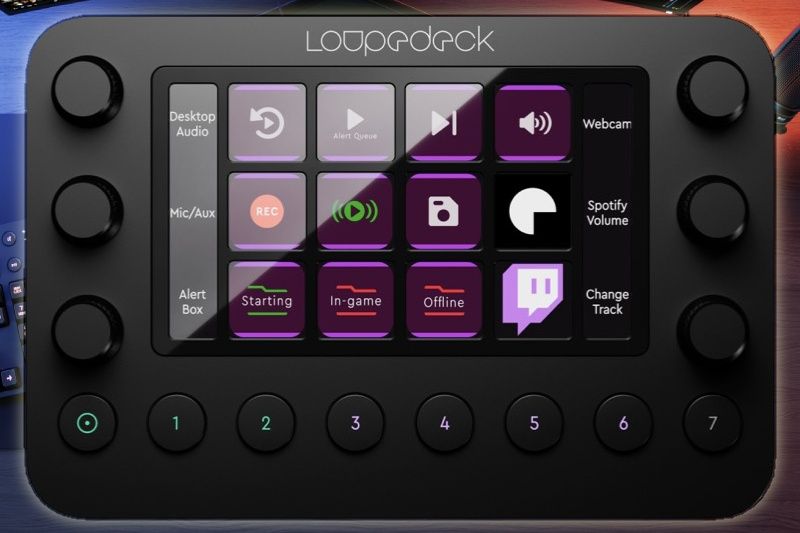 The Loupedeck Live consists of eight tactile buttons, six knobs, and twelve touch buttons. Like the Stream Deck, these can be used to control most aspects of your stream. Starting and stopping streaming, recording, pausing, muting and unmuting, controlling audio and media, trigger actions, changing scenes, and more. Unlike the Stream Deck, however, the addition of rotary knobs gives you fine-grained control that you wouldn’t have otherwise. It feels natural and much more like you’re “mastering” your broadcast.

What’s more, all of this simply works. Once you’ve installed Loupedeck’s software suite, it will detect whenever you open OBS or StreamLabs and change the inputs to match. Since the software is required, it’s not exactly plug and play, but it’s pretty close.

It does this with other pieces of software as well, including the Adobe Suite and Final Cut for you Mac users. Simply open the program and the most common commands are right at your fingertips, labeled for easy use. It’s also worth a particular shout out that Loupedeck has now made all of these plug-ins free after listening to customer feedback. So, if there’s an official plug-in, you have access to it. If there’s not, the community is actively creating and sharing profiles for you to download.

The question, then, is whether or not something like this is actually useful. After all, you could simply map most of these shortcuts to your keyboard. It is and here’s why: many, if not all, shortcuts require you to use two hands to access them, forcing you to take your hand off the mouse. You’re also stuck memorizing each shortcut’s location, slowing you down as you learn the software. If you can use them with one hand, you’re still stuck contorting your left hand into uncomfortable positions. The Loupedeck Live does away with all of that. Here’s how I use mine: 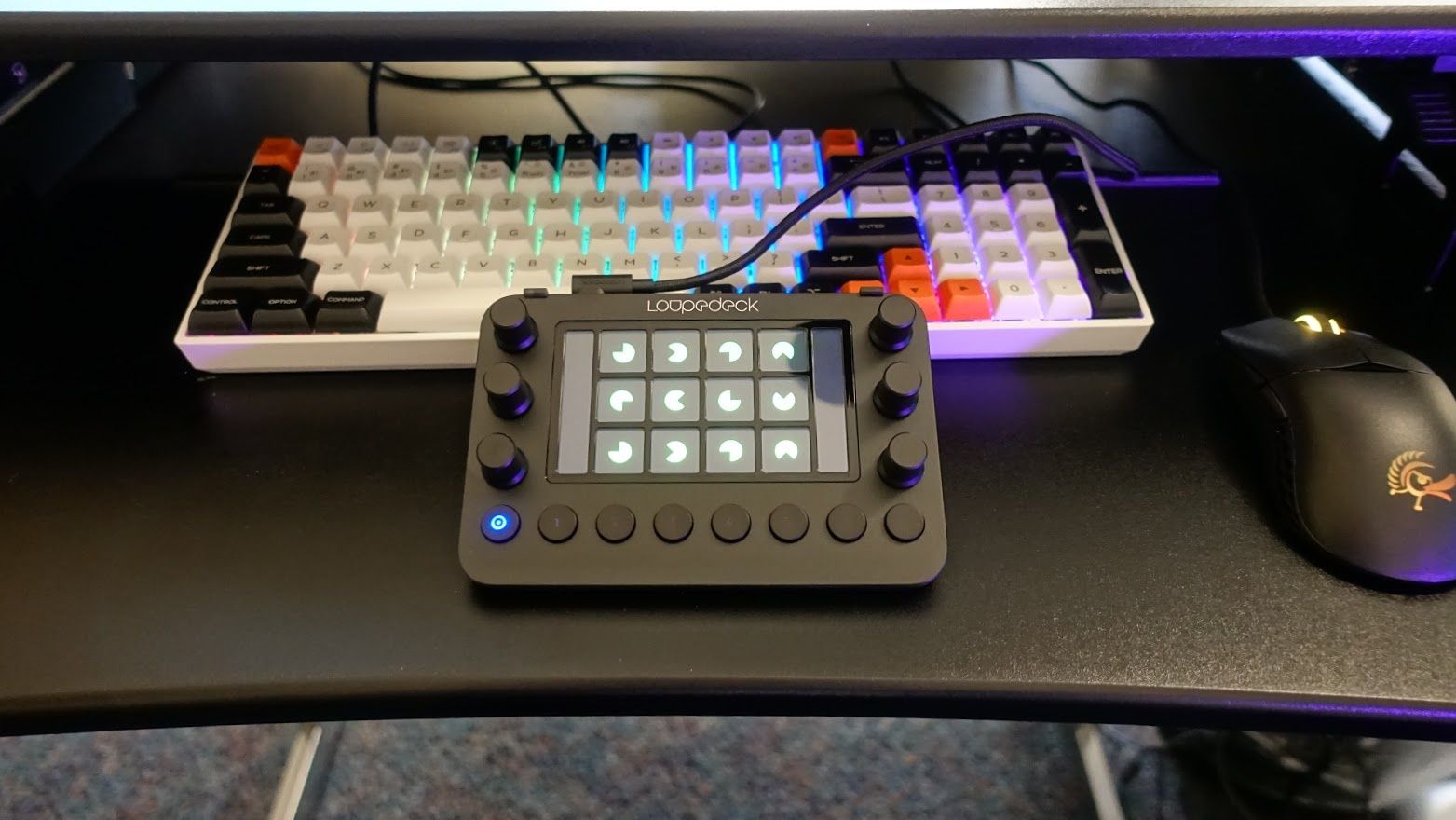 The value of the six knobs really can’t be overstated either. When I’m scrubbing a timeline in Premiere Pro, adjusting brush size in Photoshop, or zooming in on a picture for a quick edit, I can do each of those things much more quickly and with greater precision.

The Loupedeck Live is the kind of device that is immediately useful but only becomes more so with time. The real potential of it comes into focus once you start customizing your profiles. The shortcuts you want on your touch screen may be different than mine, but the software allows you to tailor it to exactly what you need. When you’re streaming, you can think of it like a Stream Deck on steroids. You can do virtually all of the same things but with a greater degree of control and customization because of the Live’s unique combination of inputs. Add to that its Transformer-like ability to automatically integrate into the software most content creators would be using after their stream, and you have a tool that is massively more adaptable and useful than the Stream Deck. 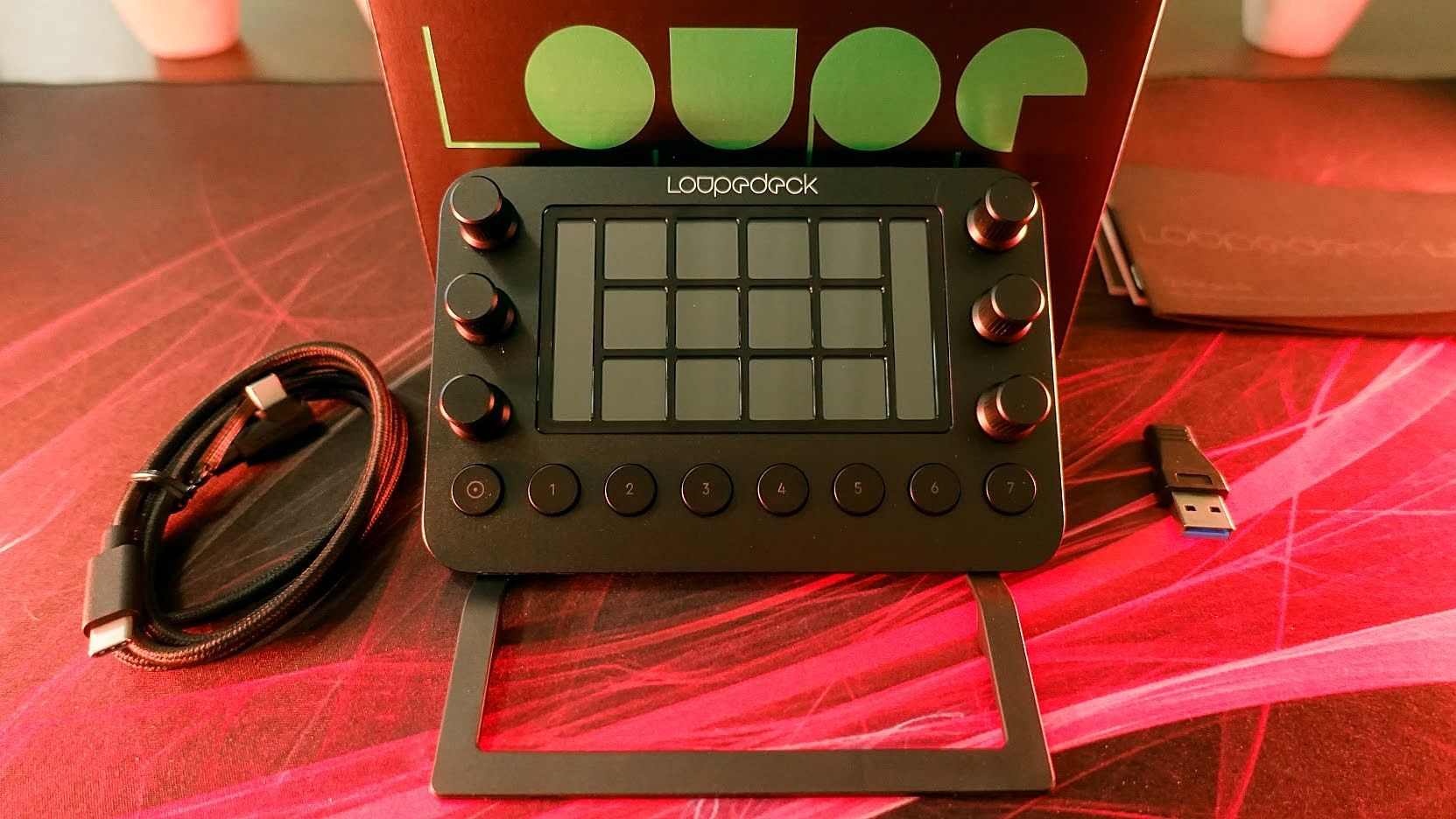 That said, it’s not a complete blow out here. All of that customization comes with a price, and that’s the software. It’s powerful but nowhere near as user friendly as Elgatos. You can use it out of the box, but you’ll want to customize before long, and when you do, the depth and presentation can be a little overwhelming. Likewise, you’ll probably be creating custom profiles for most things you do with your computer (which turns that 3x4 grid into a limitless array of options), but navigating the interface isn’t as straightforward as it could be. Manually swapping application layers to access a Windows shortcut while on the Twitch layer, for example, requires multiple button presses by default. Elgato’s Stream Deck has also had more time out of the gate for third party integrations, such as controlling Nanoleaf light panels, for example. Simply put: there’s room for both refinement and growth on this still-new product. 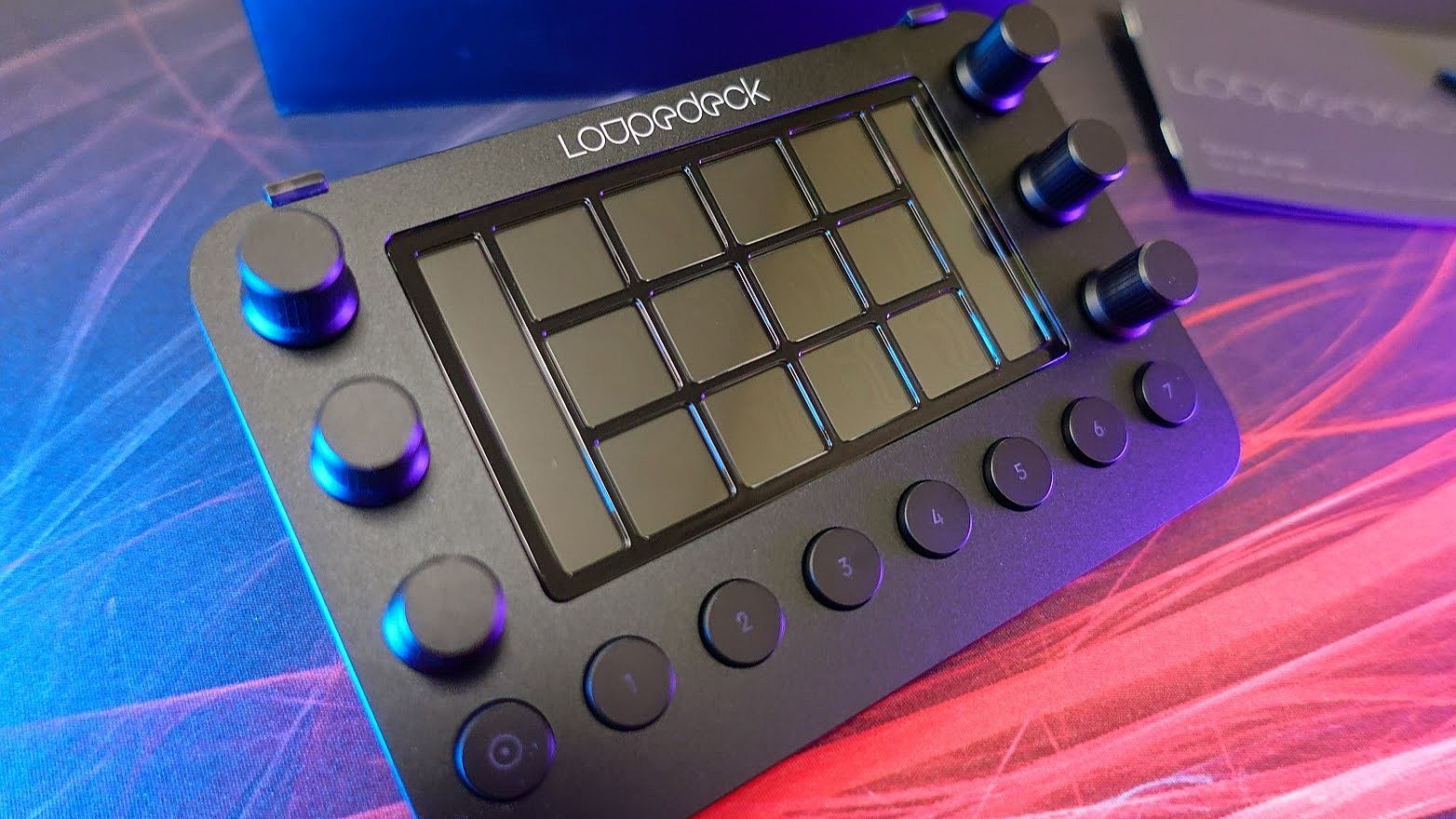 What we have then is a product that is genuinely cool and uniquely useful to streamers and content creators. This is the kind of product that once you use it and get used to it, it’s hard to go without it. Between the Loupedeck Live and the Elgato Stream Deck, there is simply no competition to the level of customization and control the Live brings, but you really need to take your time and learn it and customize it before it really starts to meet its potential. There’s still some polish to be done and integrations that I hope will come with time, but this is a very solid foundation that will help a lot of people spend less time worrying about shortcuts and more time playing games and creating.

The product described in this article was provided by the manufacturer for the purpose of review.
8.5Great
Pros
Cons
Tags
streaming gear
Content Creation
Loupedeck