Last summer, Logitech unleashed their new flagship keyboard on the world in the form of the G915 LIGHTSPEED Wireless. It was packed with features: Logitech’s brand new low profile GL switches, an incredibly thin body, 1ms wireless connectivity, full RGB backlighting, and more. If there was one thing fans kept asking for, it was a tenkeyless to replace their current compact keyboard.

Logitech listened and today we have that keyboard: the Logitech G915 TKL LIGHTSPEED Wireless. Coming in at $229, it’s flagship-priced but does it offer flagship performance? 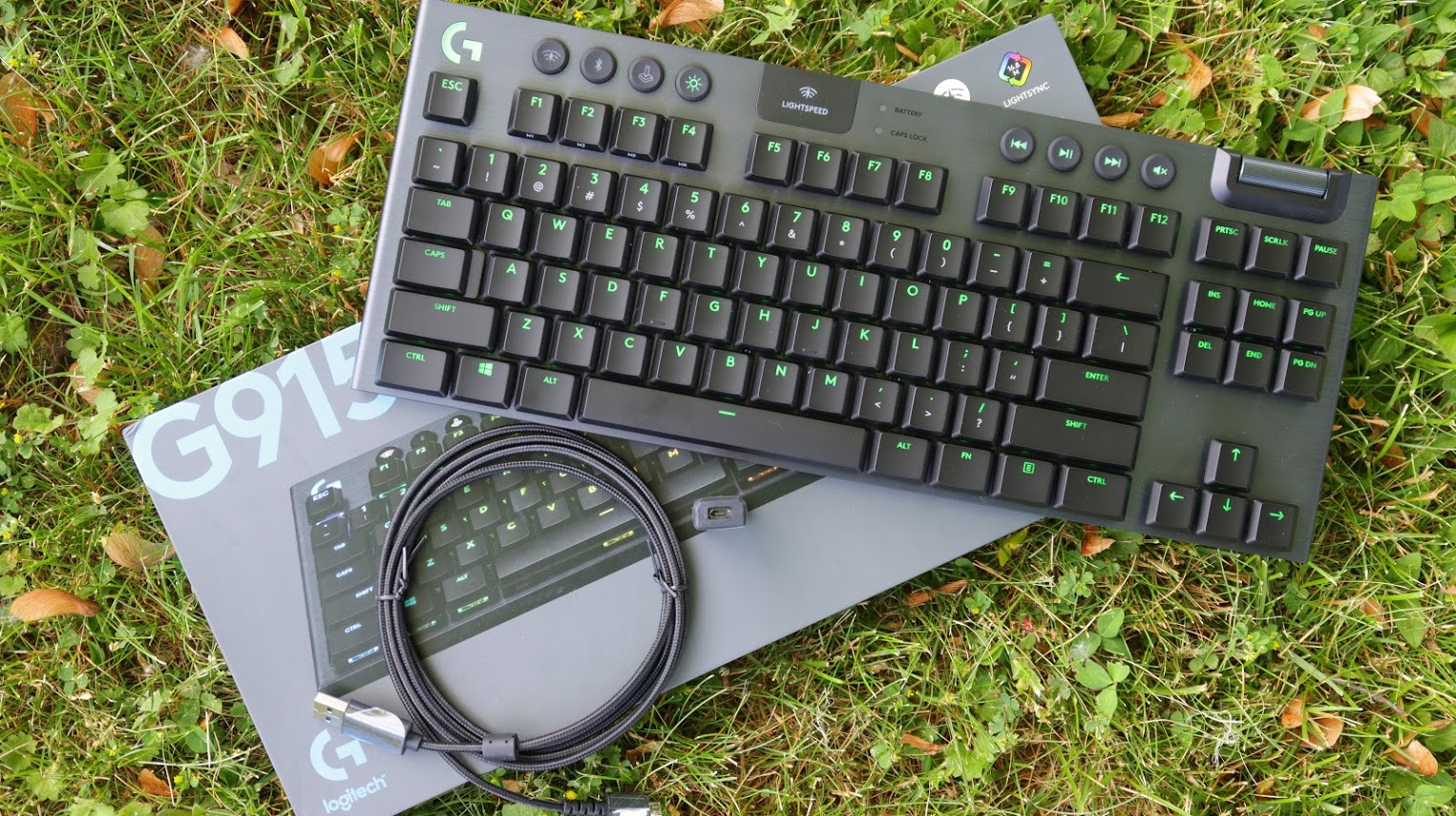 Like the original G915, the G915 TKL is feature-rich. It offers exactly the same level of programmability and customization, the same excellent low profile design, the same beautiful RGB backlighting. If you need a new gaming keyboard and want something low profile that doesn’t force you to sacrifice functionality, look no further. You’ve found it.  When it comes to low-pro gaming TKL gaming keyboards, this is it. Logitech wins.

With that out of the way, let’s look at why starting with the design. The G915 TKL is thin at only 22mm in height. It’s topped with a brush aluminum plate whose edges round gracefully instead of ending in a straight edge, adding a unique elegance to the design that’s uncommon in gaming keyboards. Logitech has gone with a gunmetal colorway and black backlit keycaps which enhance this appearance and help keep the lighting isolated to the legends. 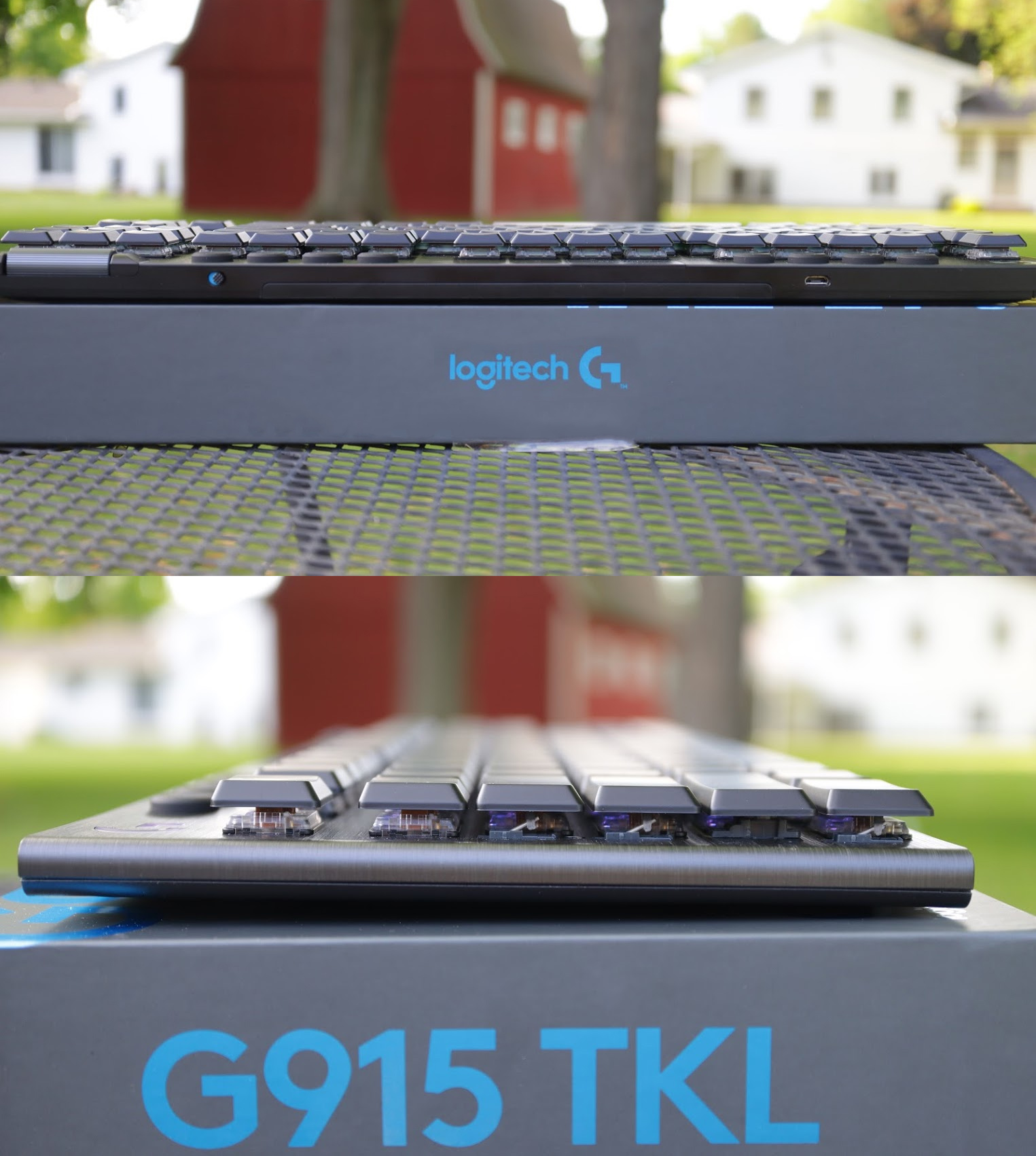 With such a thin body, you would expect it to flex and bend easily. That’s the usual compromise, but you won’t be making it here. The 5052 aluminum alloy top plate helps keep it rigid, but underneath the base has been steel reinforced. This board is solid with little empty space under the plate, which translates into a very solid-feeling typing experience. I’ve had the privilege of using a half dozen or so low profile mechanical keyboards, and the only one that feels more solid is the Mistel Barocco MD650L which has a full metal case (and it’s own share of shortcomings). That Logitech was able to deliver such a modest height seemingly without sacrifice is nothing short of impressive.

This thin body is paired with an all-around more compact design. As a tenkeyless keyboard, the number pad has been removed, but the left side has also been trimmed down. The left macro column has also been removed, bringing the total length down to 368mm or 15.2 inches. 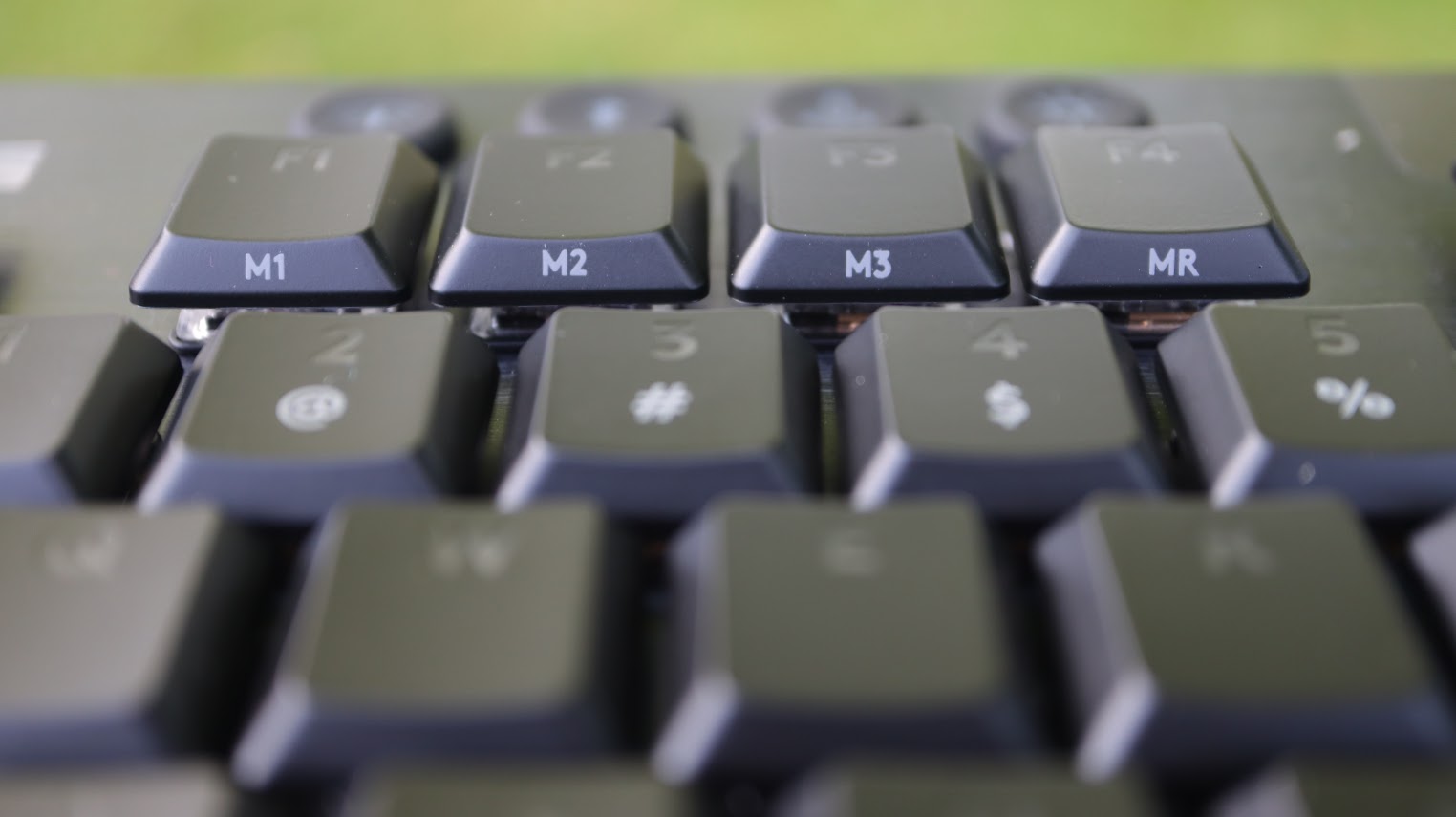 This more compact design has also lead to a rework of the top of the board. The biggest difference is that the soft-touch profile and macro keys have been removed and now reside as secondary functions on F1-F4. The connectivity/customization buttons have been shifted in their place, directly above this function row and are otherwise identical with buttons for LIGHTSPEED and Bluetooth, Game Mode, and Brightness control. The LIGHTSPEED logo and indicator lights are now centered. To the right, we find our dedicated media buttons and the excellent knurled volume roller. These changes are overall fairly minor, but I’m glad Logitech decided to keep the dedicated media and volume controls. They make for an overall better experience, especially if you find yourself adjusting volume frequently or watching videos often. 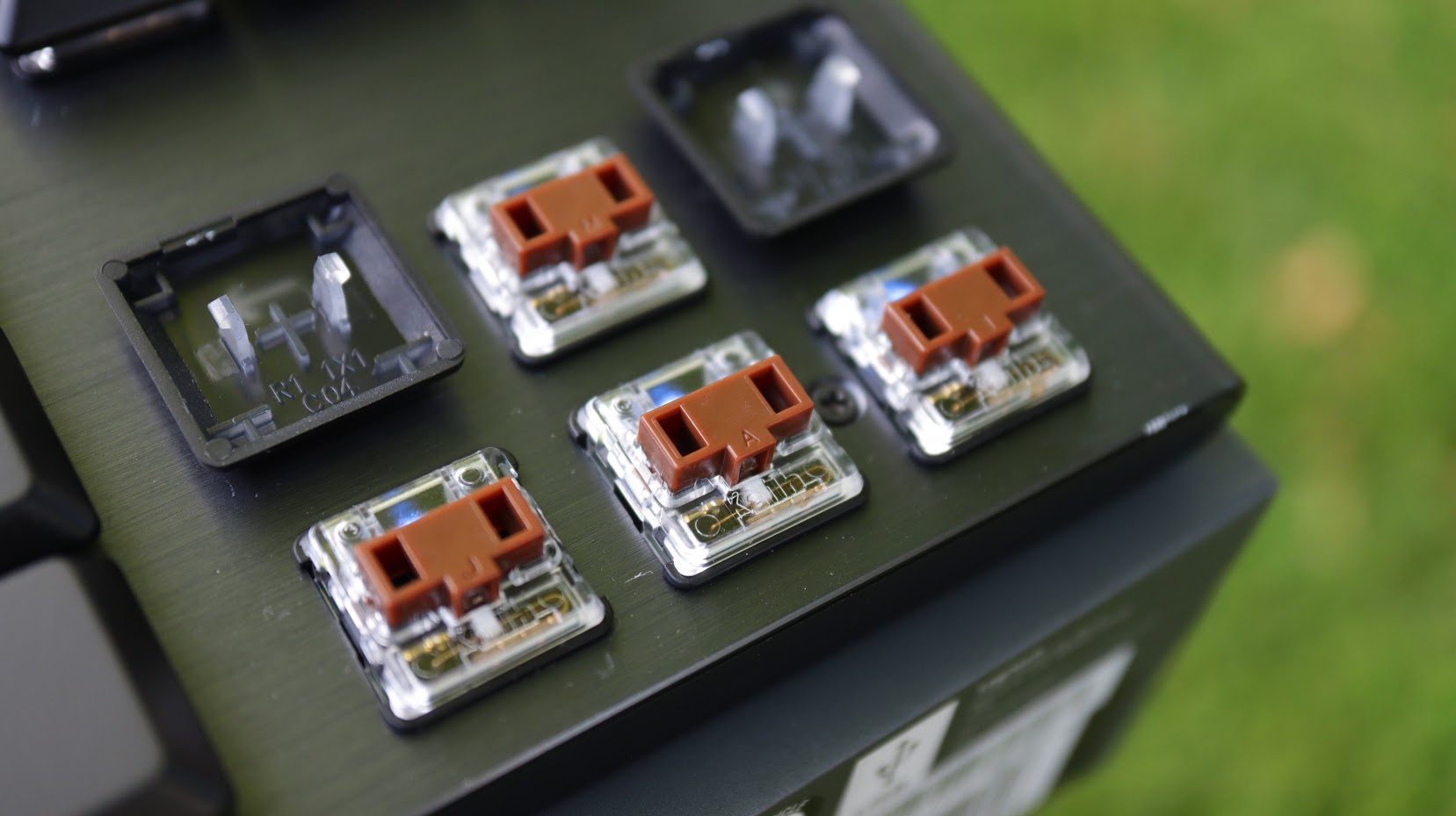 The compact design is made complete with Logitech’s GL switches. These have been produced in partnership with Kailh and are very similar to their Choc switches. Unlike many low profile keyboards which use a membrane or scissor switch, these keys are much closer to a traditional mechanical keyboard but at half the height. Available in Clicky, Linear, and Tactile versions, they check all of the boxes for your preferred switch type.

Despite their short height, they offer specs that are closer to traditional switches than you might expect. A full-height MX switch will typically have a 4mm travel distance and actuate halfway through at 2mm. These switches have a shorter overall travel at 2.7mm but actuate at 1.5mm. This makes them easier to bottom out, but with an actuation force of 50g, accidental presses are few and far between. For gaming, these specs are great and offer a speed advantage over normal switches — if your reaction time is up for it. The downside is that finding replacement keycaps is going to be a challenge since not many sets exist that are compatible with GL switches.

The speed of these switches is paired with the deep programmability of Logitech’s G Hub software. I’ve said this in multiple reviews now but it bears repeating again: Logitech G Hub is one of the most user friendly programming suites on the market and gets better with every release. The entire function row can be remapped or programmed to fire off a macro. You can map Windows shortcuts by choosing from a deep, pre-programmed list or customize whole program launches. All of this is intuitive, so a complete newcomer could program their board with little or no guidance. And, in roughly two years of using the suite, I’ve never had it crash once. That not something I can say about Corsair or Razer.

But: why can’t I remap any other keys on the keyboard? That is something offered by the competition. Likewise, on the fly macro recording requires Logitech G Hub be running in the background.  These are things I would have expected more freedom with, especially at this price point. 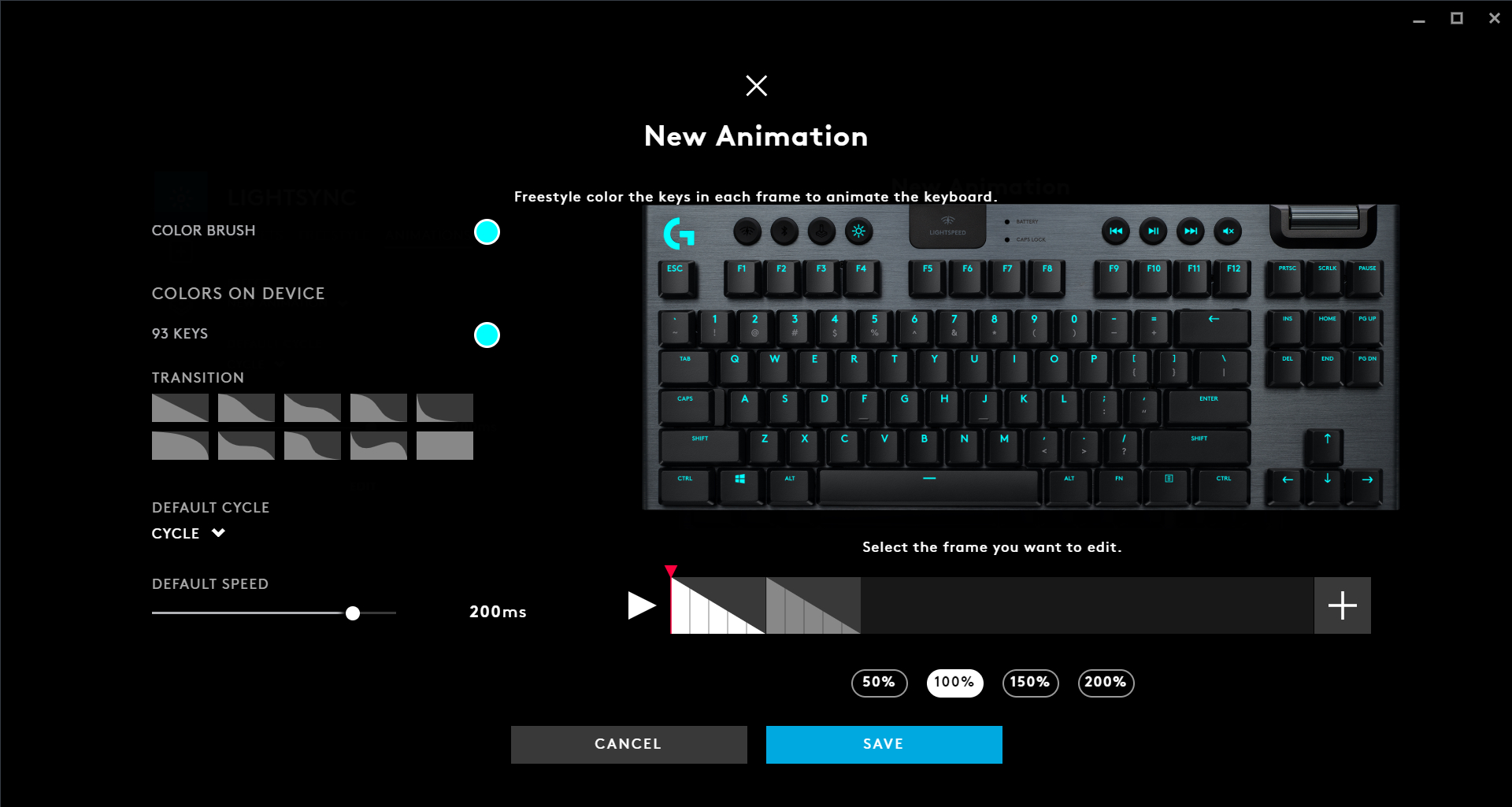 G Hub also allows you to customize your keyboard’s lighting. Like their past keyboards, lighting can be set from a plentiful list of presets of customized per-key. G Hub still isn’t quite at the level of iCUE or Razer Synapse, but it’s extremely close, and, importantly, is easier to get up and running with. The G915 TKL is also one of the few RGB keyboards today that still embraces keeping lighting isolated to the legends of each key.

All of your settings can also be saved on board, as well, with two macro profiles and three lighting profiles. That puts total macro/shortcut count to 24, which is plentiful — but again, function row only. 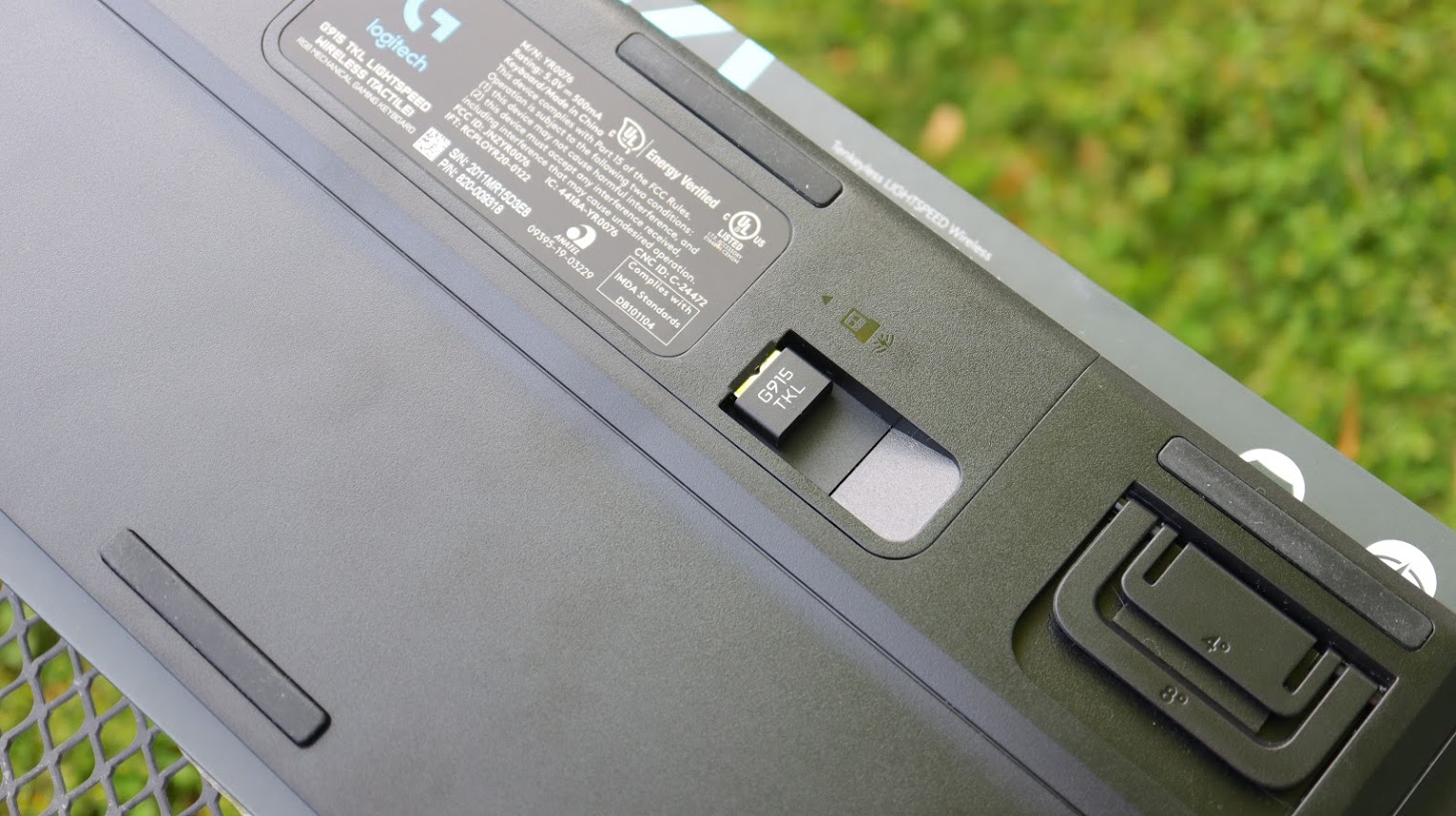 As the name implies, the G915 TKL uses Logitech’s proprietary LIGHTSPEED wireless technology. Using the wireless dongle (which handily stores right in the back of the keyboard), it’s able to offer a response time of 1ms, which is on par with premium wired gaming keyboards. I’ve used LIGHTSPEED peripherals extensively since their release and the story remains true with every single one: this really is no sacrifices wireless. Even in intense, high-speed shooters like Doom Eternal, I wasn’t able to feel any difference in responsiveness, even when side-by-side with its flagship competition.

If mobile is more your speed, you can also connect over Bluetooth at a reduced response rate. For productivity, browsing, and non-competitive mobile gaming, it’s perfectly fine, but you’ll want to stick with LIGHTSPEED on your PC. I have to say, I loved how seamless it was to switch between devices, however. The G915 can remain connected over Bluetooth and LIGHTSPEED simultaneously, allowing you to easily swap back and forth by pressing the associated button on the top of the keyboard.

The battery life here is also very good. Even at full brightness, it’s rated for 40 hours of game time. The keyboard will also put itself to sleep fairly quickly when not being used, dimming after one minute, and going into standby after five. I found this to be fairly accurate in my use case, though I often plug my peripheral in when not in use, which completely eliminates this issue. I was surprised to find that the keyboard still uses micro-USB instead of USB C. From a flagship keyboard in 2020, this is odd to say the least.

Whether or not the Logitech G915 TKL LIGHTSPEED is for you depends on how you much you enjoy low profile keyboards. If you do, it’s hard not to love it. The G915 TKL has its areas for improvement, which make the exceptionally high price point a bit harder to swallow, but what Logitech has delivered here is easily the best low profile keyboard I’ve used, excepting only the full-size G915. The form factor is excellent and has the key feel to match, on top of zero compromises wireless responsiveness. If you’re in the market for a low profile gaming keyboard, it’s not a competition: this is the board to buy right now.

The product discussed in this article was provided by the manufacturer for the purpose of review.
7.5Good
Pros
Cons
Tags
Mechanical Keyboards
Peripherals