Over the course of the last ten years or so I’ve used countless headsets.Each one brought something different to the table - some were meant for comfort over all else, others brought noise cancellation to the mix. All of them, however, were considered “gaming” headsets, which for many over that time period meant gaudy pieces of plastic. Thankfully, as the years have gone on headsets have started to prioritize the look as well as the functionality. The Logitech G Pro X series of headsets definitely aims to combine the best performance for the price, as well as an elegant look and utmost comfort. The Pro X Wireless takes it a step further by taking the performance of the Pro series and untethering it from your PC.

The packaging of the Logitech Pro X Wireless headset is among some of the best I’ve seen for a gaming headset. The sleek box carries in it the charging cable, obviously the headset, replacement ear pads if you like more breathable cloth over the leatherette pads installed by default, the USB dongle, and an incredibly nice carrying bag to store the headset in should you choose. It’s a nice package altogether, and one that feels premium when you first open and start to go through everything.

I’ll admit though, when I first saw the headset I honestly felt as though it was going to be too tight on my head. The headset looked way too skinny, especially compared to some of the wider headsets I was used to using, such as the Victrix Pro AF or the Astro A40s. However, I was pleasantly surprised to find that the headset fits comfortably on my head - so much so that I often forget they are on there when going to grab a drink from downstairs. 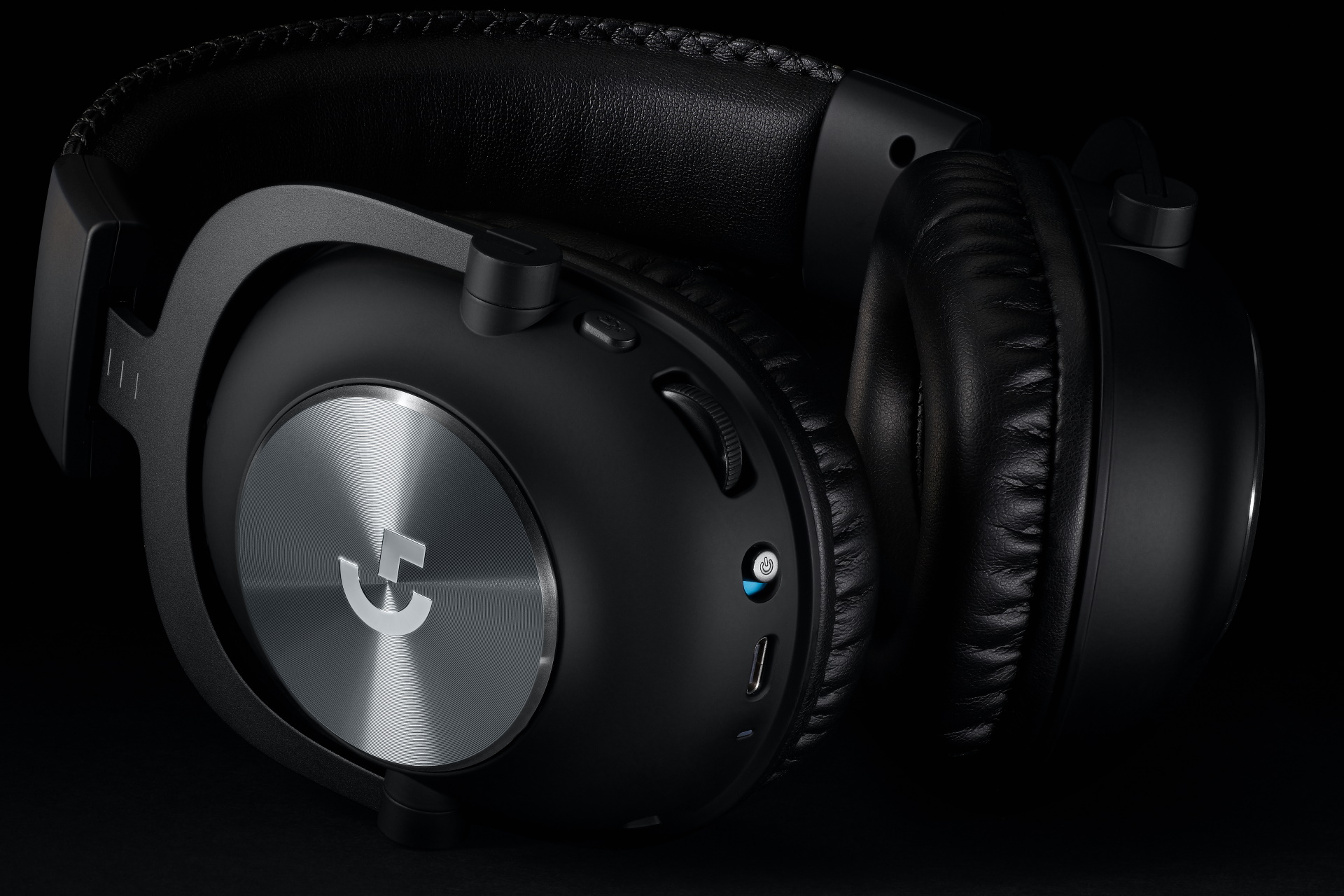 The Logitech Pro X Wireless are also incredibly light. I don’t feel fatigued wearing the headset like I have with some of the heavier ones I’ve used in the past - the Pro X Wireless is a pair I have found myself wearing most of my workday without any issue. This is huge for me - especially as my work and gaming PCs are the same. I can go from listening to music while working to gaming without worrying about whether or not I need a break from the headset itself.

Part of that is down to the materials the Pro X Wireless uses. I love leatherette ear pads. I find them to be much more comfortable than cloth ones - more often than not the latter feel scratchy and sweaty over time - especially in the Vegas summers. However, the memory foam leatherette ear pads and headband pad feel outrageously comfortable. The only issue sometimes is if my office feels particularly stuffy, the fact that the leatherette isn’t as breathable as its cloth counterpart can see me needing to remove the headset to get rid of excess moisture from sweat. I miss the venting earpads the Victrix uses to, well, vent the ear cups, and I kind of wish all headsets did that standard now.

The headset itself sports an on/off switch, a volume wheel, mute button and the USB C connection port on the left ear cup. When turned on, the headset sounds an ascending chime, letting you know it’s ready for use. When muting the microphone, it also sounds a chime, though this time descending as an audio cue that your mic is now muted.

The fact that the headset is wireless is one of its major advantages. I don't feel tethered to my desk any longer, and the fact that there isn't a wire removes the annoying scratching sound some headsets can have when a braided wire rubs up against something while wearing them. The USB dongle fits snugly in the back of my PC and I never noticed any lag or issue with the quality unless I oved too far away from the dongle's range. While this means that audio cuts when I'm filling my water cup or something downstairs, it quickly comes back when I'm in range of the dongle again instead of having to reconnect on my own.

But How Does It Sound?

The Logitech Pro X Wireless use two 50mm Neodymium drivers to, erm, drive everything from music to the most intense gaming audio. Music such as John Coltrane’s “Giant Steps” sound crisp, the fuzziness of Coltrane’s saxophone reed clearly coming through over the headset, with the piano and bass clear as the day it was recorded in the background. Pieces such as Mozart’s “Requiem in D Minor (K 626)” is full of beautiful moments, highlighting the crisp highs of the Logitech Pro X Wireless headset fully, though the bass does leave some to be desired overall. Moments like the Confutatis are somewhat dulled by the lack of a bombastic bass, and as someone who doesn’t like a ton of overwhelming bass in my audio mix, it definitely felt lacking.

Game audio sounds immersive. Playing Elite Dangerous over the weekend brought with it more atmosphere than I’ve felt in that game in quite a while. Engine sounds popped, weapons fire was heard all around me thanks to the simulated surround sound from Dolby Atmos on my PC, and stations felt more alive thanks to the incredibly clear audio. The 50 mm drivers really push the audio, and thanks to the leatherette ear pads the seal around my ears keeps the audio in, enhancing the experience.

One of the major features of the Logitech Pro X Wireless headset is the integration of Blue microphones. Having purchased the company, it was only a matter of time before we started to see the microphone tech from Blue make their way into the higher end headsets. I love my Blue Yeti and Yeti X microphones and constantly recommend them whenever I’m asked for a streaming or podcasting mic, so I was really interested in checking out the audio quality when pushed into a smaller space such as a headset mic.

Thankfully, the high quality I’ve come to expect from Blue microphones is retained and on full display in the Pro X Wireless. I’ve used the headset mic for the past two weeks for Zoom calls with co-workers, podcasting, as well as our weekly Saturday stream, and each time the microphone performed admirably.

Unfortunately, as of this writing, I have been unable to get Logitech’s G Hub to recognize the Pro X Wireless as a device on my PC. I’ve tried uninstalling the app and reinstalling, updating, as well as uninstalling the drivers for the headset itself in the hopes that it will be picked up on the next connection. It’s a shame as I was unable to test the Blue Vo!ce filters, though if they are mostly the same as the filters for theYeti X, I might find myself not using them overall as I’ve come to prefer the default profile.

Overall, the Logitech G Pro X Wireless is a fantastic headset, especially when put up against rivals such as Victrix or even Logitech’s own Astro brand. At $199 the Pro X is definitely a premium product, a full $70 more than its wired counterpart. The headset’s high quality audio definitely makes it worth the premium price tag, however.

Sporting some of the best audio in a headset I’ve heard at this price range, it’s easily become my go-to headset among my roster of audio equipment. While I do wish the bass had a little bit more power, it’s not distracting overall. Coupled with an incredibly clear and crisp headset mic from Blue and the Logitech G Pro X Wireless headset is an easy recommendation.

While it’s a shame we weren’t able to test the G Hub functionality and one of the major features, Blue Vo!ce, we have reached out to Logitech and will update this review once we are able to do so. In the end, however, it hasn’t hindered my ability to enjoy the headset overall, just makes me wonder how much more I can get out of its already incredible performance once those features are opened up.

Full Disclosure: Product discussed in this review provided by manufacturer for the purposes of this review.