The LETSHUOER S12 is the second major planar magnetic IEM to release this year and — spoiler alert — it’s good. It comes hot on the heels of the 7Hz Timeless, the first big planar earphone of the year and one of the first we’ve come across that has a great, full-bodied tuning. The S12 comes to market a full $50 less than the Timeless, but does it have what it takes to compete against an already established indie darling? Find out in this review.

Thank you to Linsoul for providing the sample for this review. 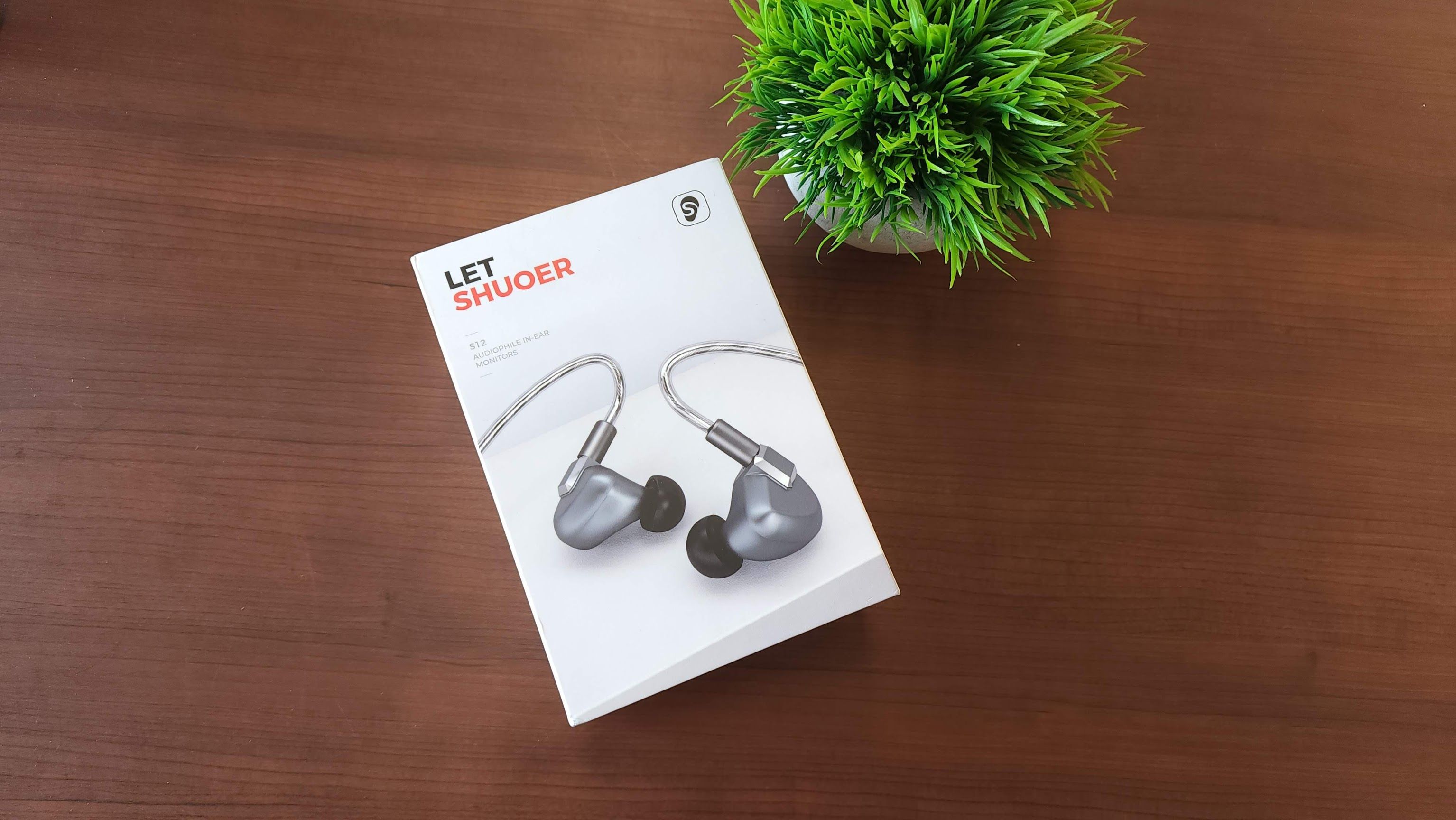 At $169, the LETSHUOER S12 isn’t what we would describe as a “budget earphone,” but against the higher prices of other planar magnetic IEMs, it still winds up fitting the bill. Planar magnetic driver technology is still trickling into the world of affordable IEMs. In fact, until this year with the release of the 7Hz Timeless, it was pretty much a given that even though they’re incredibly popular in over-ear headphones, planar IEMs were either affordable and poorly tuned, or well-tuned and extremely expensive (see the Audeze in-ear line-up). Compared to the entry-point of $399 for the Audeze iSine 10 or the $219 for the Timeless, $169 for the S12 winds up feeling pretty cheap.

Even though it’s more affordable, the S12 is well built and made for daily use. It features CNC-milled aluminum earpieces and a thick, plastic-coated cable with metal terminations. It doesn’t have the fancy looks of other IEMs and instead focuses on minimalism. There are no logos or printing of any kind on faces of the earphones, just polished metal. The inner half which touches your ear is contoured and lacks any sharp edges to press into your ear. The earpieces are also rather small and should fit in any ear. I didn’t have any issues with comfort after finding the proper tip. 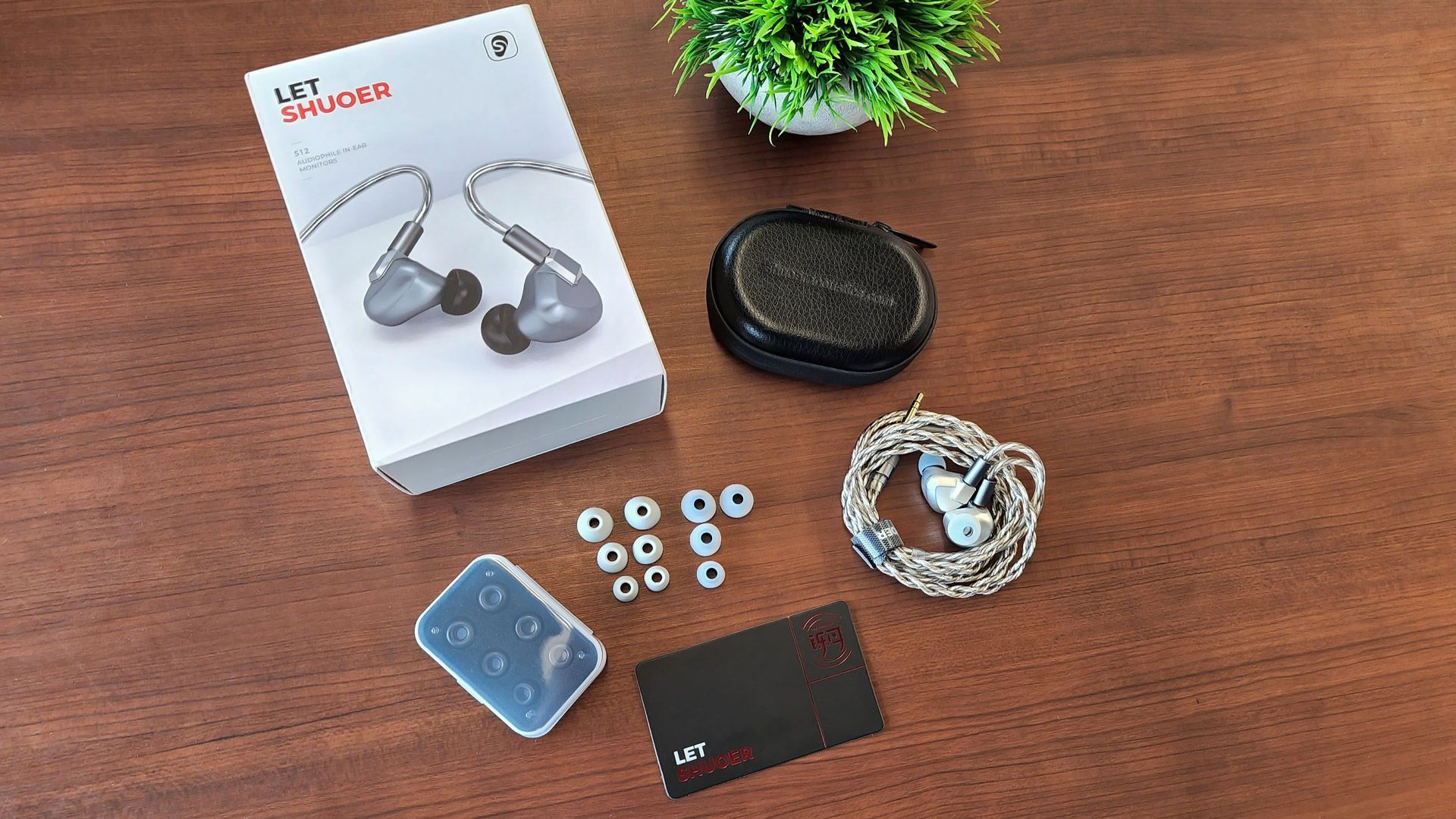 Also included in the case is an assortment of accessories, including tips, cable, and case. The cable is copper, coated in high-purity silver. Like the Shuoer Tape Pro, the plastic wrap lends it added stiffness and, if you have smaller ears like I do, you’ll want to use the chin cinch to ensure it doesn’t tug the buds out of place. It connects to the earpieces using dual 0.78mm pins so is easily replaceable if you’d prefer something softer.

The selection of tips makes it easy to find a comfortable fit. It comes with three sets of silicone ear tips (small, medium, large) in softer and firmer silicone. There are also three pairs of foam ear tips for better isolation. 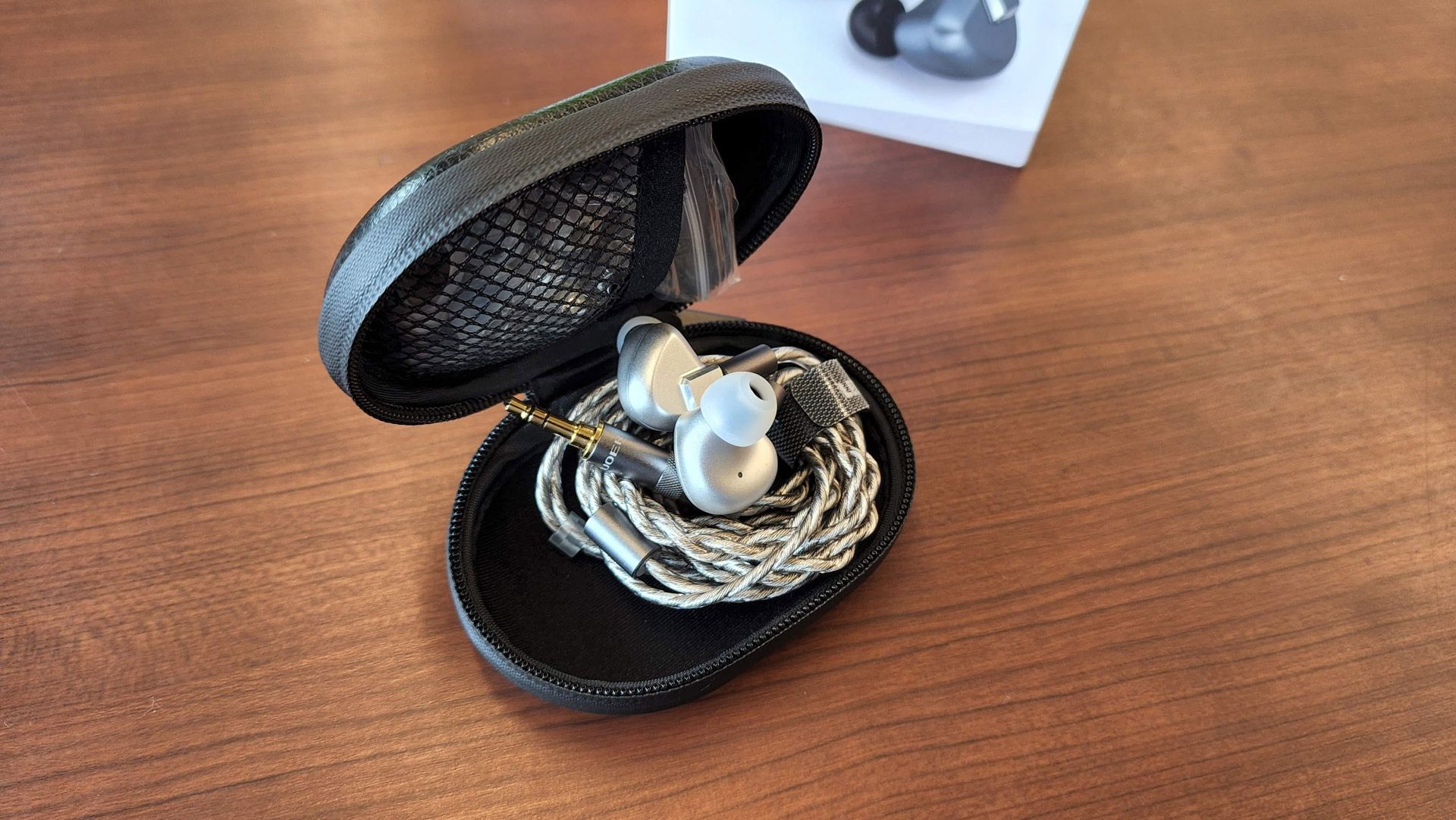 Finally, the buds come with a nice faux leather case that’s small enough to slide into a pocket. It’s has a pocket to store some accessories (alternate tips) and is firm enough that crushing shouldn’t be a concern if you’d rather toss it into a backpack with your textbooks.

Inside its minimalist shells, the S12 uses a large 14.8mm planar magnetic driver. Planar magnetics are popular in the over-ear world due to their low distortion and high levels of detail. A well-tuned planar can offer a tremendous listening experience, so there has been an almost perpetual demand for high-quality planar magnetic option to enter the IEM space at accessible prices.

With that, let’s get into the sound. 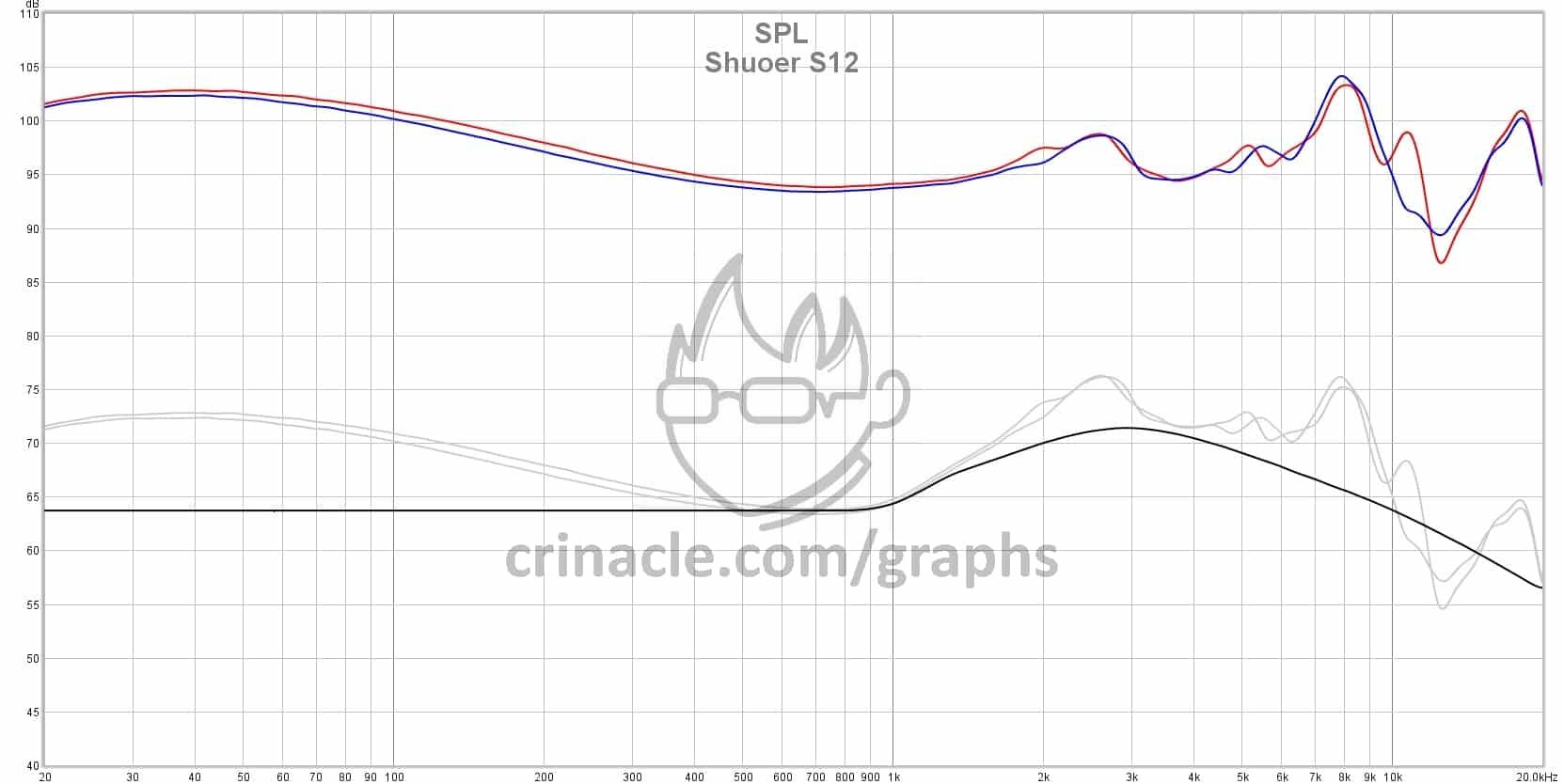 The listening tests for this review were conducted using a mix of the iFi Go Blu wireless DAC/amp using LDAC and the Xduoo XD-05 Plus. Music was played of Spotify on Very High quality and from a mix of games, streamed shows and movies, and local video files with uncompressed audio.

Bass: The bass performance on these earphones reaches deep but remains tight. There’s a plentiful amount of sub-bass that results in a sub-woofer-like feeling, but the notes remain detailed and aren’t rounded off. Listening through Jonny Craig’s The Places We’ll Never Be was particularly enjoyable on these and leant key songs like Going Under much more body and presence. Even though the bass rise occurs relatively close to the lower mids, I didn’t find these to sound hazy or muddy. Instead, the mids and highs cut through cleanly. 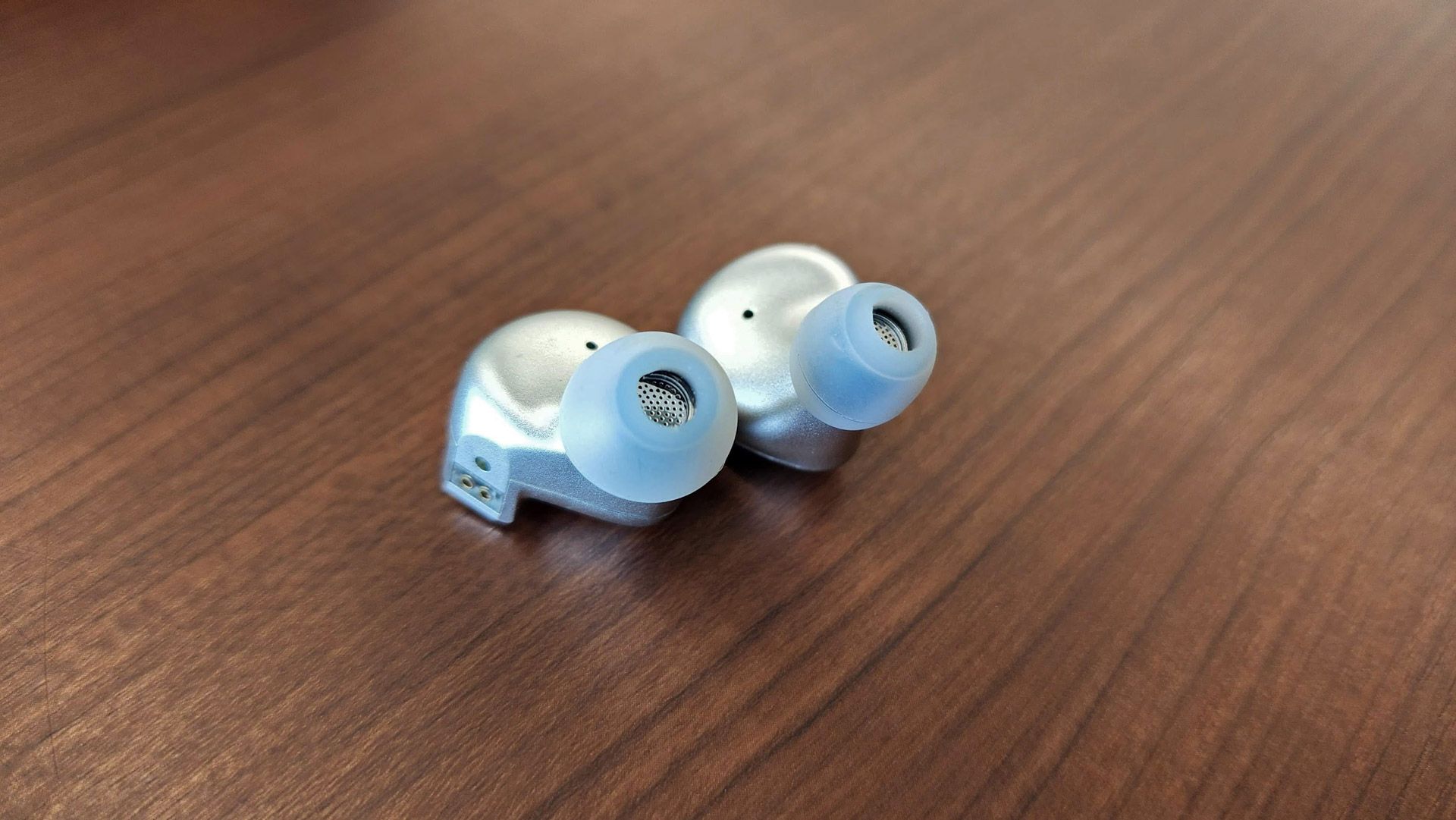 Compared side by side with the Timeless, the S12 shines more brightly. The texture of bass is better on the S12, even though the quantity is close overall.

Mids: The mids on the S12 are excellent and, again, close to the Timeless. The center-middle frequencies are slightly recessed, giving this earphone a U-shaped signature, but they rise again quickly starting at 1kHz. That means vocals and instruments have a tendency to pop out of the mix a bit more. The soundstage isn’t the widest, so the instruments don’t sound exceptionally spaced, parts are well layered and come through clearly. Compared to the Timeless, mids are a bit crisper, which I prefer.  The S12 has a number of peaks extending into the treble to bring out detail and air in what you’re listening to.

Treble: Treble performance on the S12 is good and a bit brighter than the Timeless. I sound like a broken record, but I prefer this enhancement as it increases the amount of perceived detail and steps percussion forward in the mix. I didn’t find the S12 to be fatiguing as a result, which just shows how well-tuned it really is. Increasing treble is a common way to give the impression of more detail, but in this case, I think Shuoer has succeeded in actually delivering it, while also raising the dB on the high-end.

Overall Impressions: As you can probably tell from the frequency breakdown, the S12 is actually quite similar to the 7Hz Timeless. It offers a bit more warmth in the low and and brightness in the treble, while the mids are probably the closest between the three registers. For my personal taste, however, I find that the S12’s frequency tweaks and improved resolution tip it over the top and make it a more enjoyable listen overall. 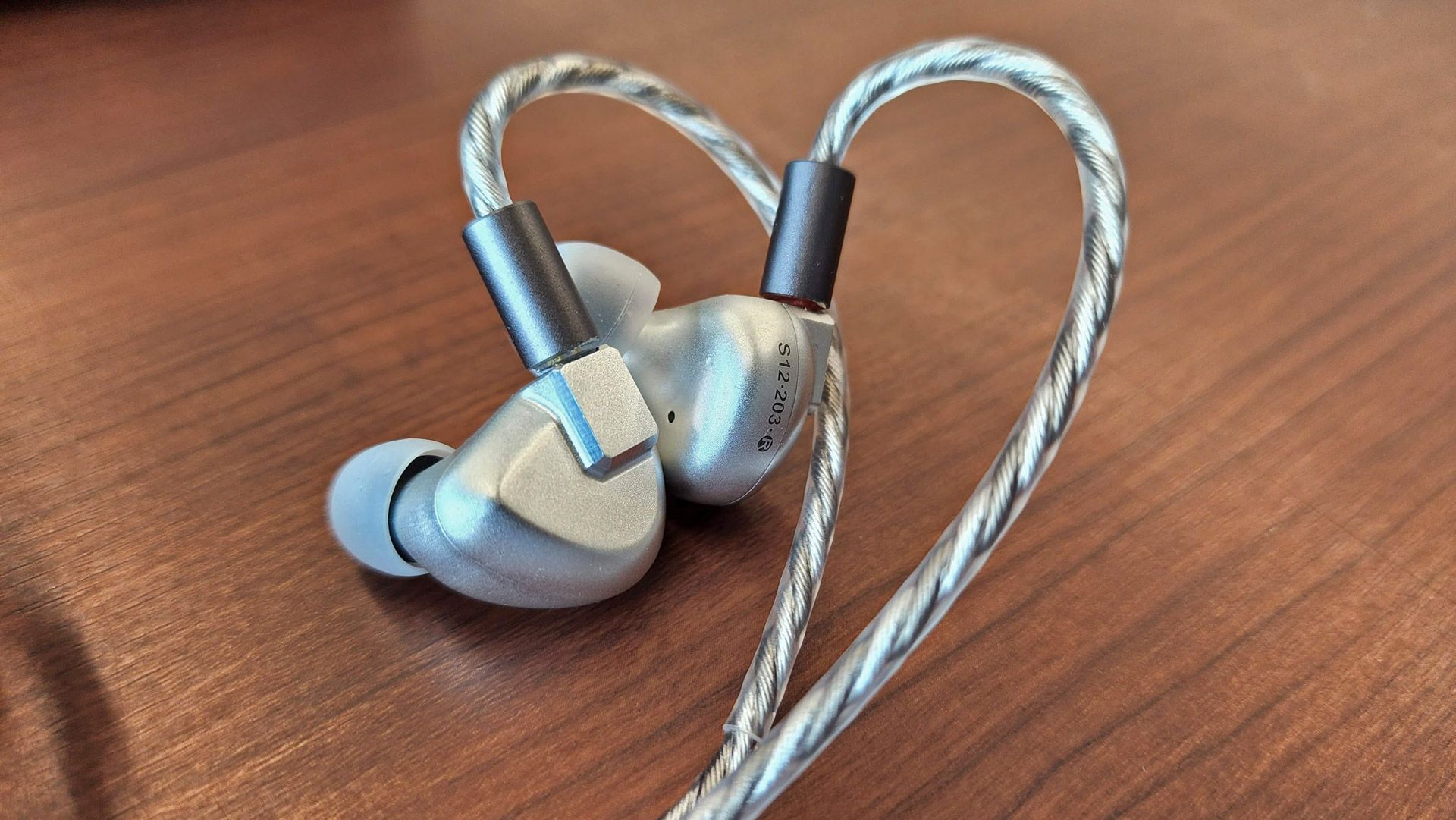 LETSHUOER has hit the nail on the head with the S12. If you enjoy a bit more bass rumble and detail in your music, these will probably be a better buy for you than the 7Hz Timeless. Sensitive listeners may find it a bit too bright, but I found it to be a well balanced set for music, movies, and even gaming (with Dolby Atmos). At the current price, these earphones are a great value and a solid choice, especially if you’re curious what all the planar magnetic hype is about.