Back in 2019 I had the pleasure of reviewing Kinesis’ FreeStyle Edge RGB Split Keyboard and it’s still one of my favorite keyboards to date but it came at the cost of desk real estate.  Since then I’ve moved and I’ve had to shelf the FreeStyle due to space constraints - much to my dismay.  So when I received an email asking if I’d like to take a look at a new 60% I jumped on the opportunity.  I’ve never really been one to use small form keyboards but if previous experiences with Kinesis were any indication, chances are I would like the TKO just as much as the FreeStyle Edge I’ve grown to miss. 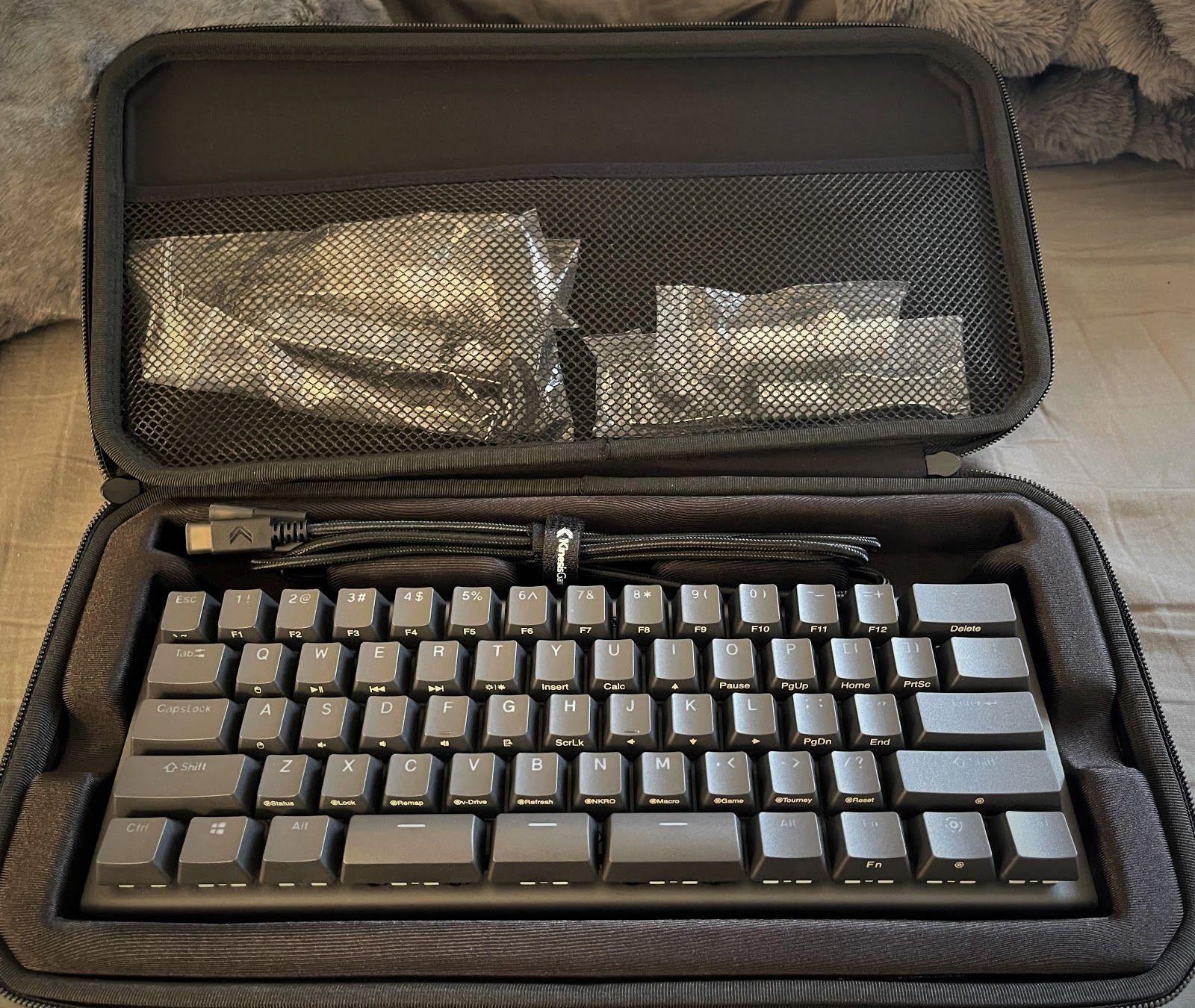 The first impression of the Kinesis TKO started the second I opened the box.  I’ve reviewed a few keyboards in the past and the vast majority of the time it’s just a keyboard in a cardboard box with some plastic over it and a quickstart guide.  Expectations were blown from the outset when I instead found the keyboard tucked snuggly in a travel-case accompanied by all the extra switches, caps, and tools I would need.  The demo keyboard I am using came with red switches (which I have a tendency to accidentally press when I’m gaming) so seeing the brown replacements for the WASD keys was a welcome sight.  Swapping the switches was incredibly easy thanks to the solderless design and almost felt no different than plopping a new keycap on.  The process was done and dusted in less than a minute - you could theoretically switch everything out at character select in an Overwatch match if you are that kind of maniac.

The second thing to really catch my eye was the bottom of the keyboard.  Now that may seem odd but Kinesis’ roots are based in ergonomic design.  There’s definitely debate between split keyboards and straight keyboards and which is “more” ergonomic but one of the mainstays I’ve noticed with Kinesis is the emphasis on how you tilt your keyboard.  Kinesis seems to acknowledge that what is comfortable is different for everything and that philosophy shines through with the TKO which features multiple options.  Firstly the keyboard sits flat on the desk, ditching the standard 5-degree positive tilt that most boards come with.  According to the documentation, this design prevents harmful wrist extension though the user can choose to use the small feet to introduce a positive or negative tilt (leaning backward or forwards).  In addition, the board comes with the ability to “tent” by using the larger legs to lift up the right or left side of the keyboard.  This is to prevent forearm pronation which can, according to Kinesis documentation, restrict blood circulation and is only meant to be used when one hand is on the keyboard and the other on the mouse. 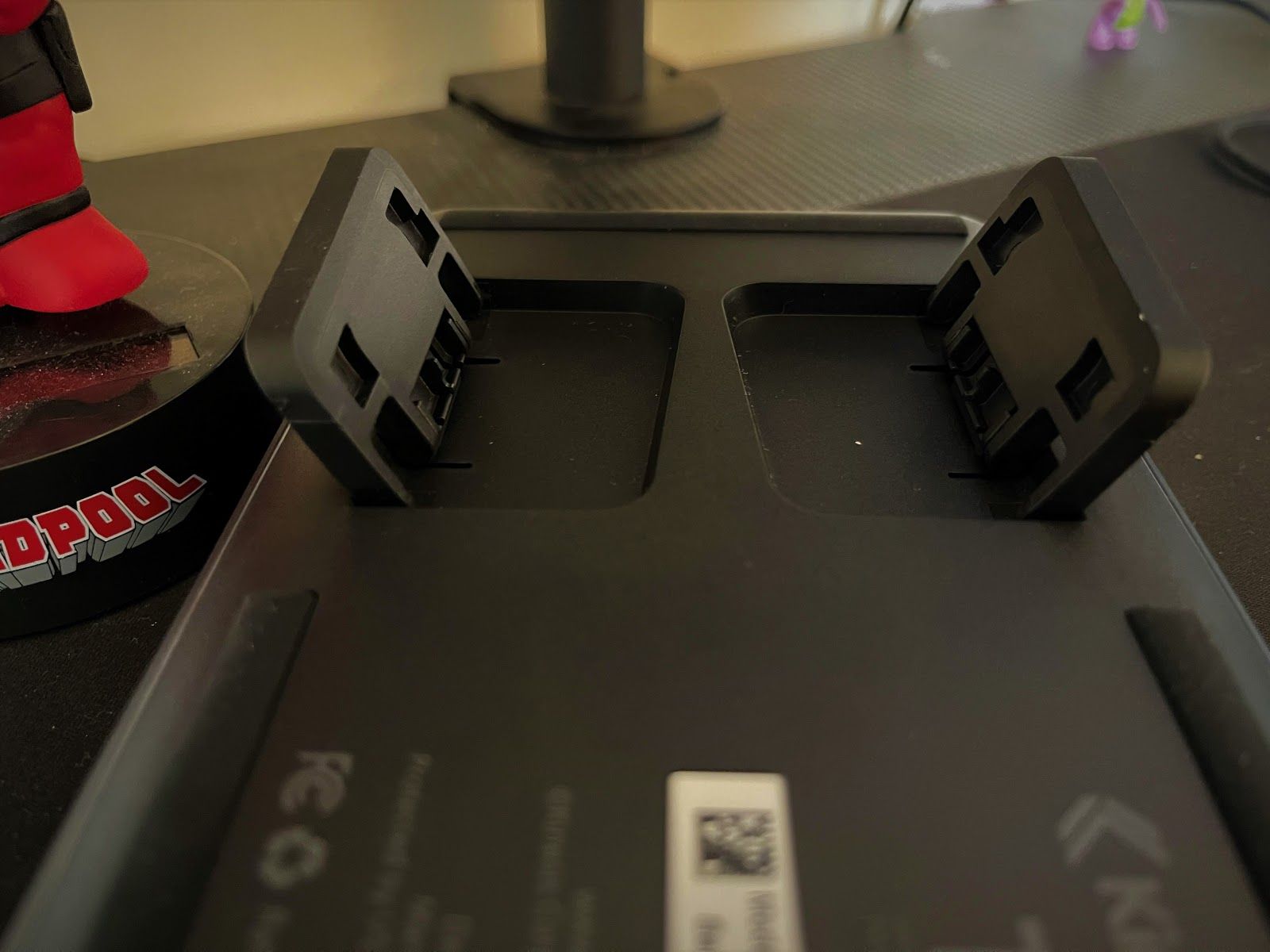 After getting everything plugged in I made a valiant, although ill-advised, attempt to get used to the triple spacebar area that the default setup boasts.  I get the idea of it: You could have just one of the keys act as a spacebar and free up two additional spots as readily available keybindings but try as I might I just couldn’t get used to it and would find myself constantly hitting the wrong key.  That’s not to say others won’t be able to make it work, especially with the ability to swap between different profiles on the fly, but this old man is just too set in his ways.  Lucky for me a standard spacebar was included and swapping out the spacebar was a piece of cake.

On the subject of different profiles, the on-board memory in the Kinesis TKO is capable of housing nine fully customizable profiles in addition to a slew of other onboard features.  This on-board functionality was one of my favorite aspects of the split-designs released previously and I was glad to see it get pulled forward into the compact line.  The onboard programming engine, called SmartSet Programming Engine, allows you to remap keys, record macros, adjust various keyboard settings (like NKRO & GameMode) all without opening a single application on your computer.  This functionality coupled with onboard memory is great for tournament-style events where you may not be on your own computer with access to the software to change your keyboard settings. 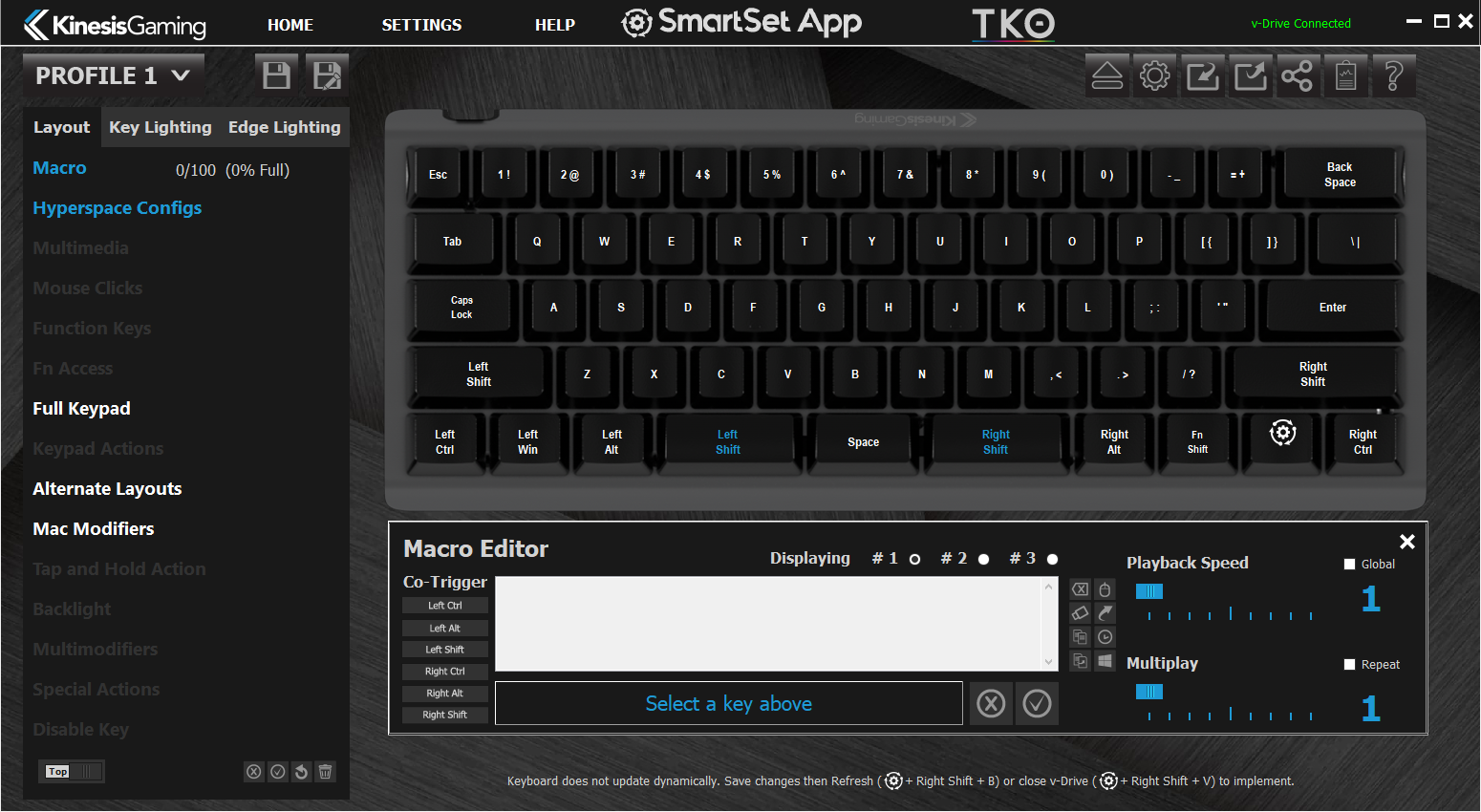 But what about when you are at home and don’t want to fiddle around with pressing hotkeys to change macros and keybindings? If that’s the case then Kinesis has you covered as well.  All the settings you can change using the board hotkeys can be tinkered with by using the SmartSet App.  Once installed you simply unlock your onboard memory with a few key clicks, the app detects your keyboard and you’re all set to go!  Within the app you’ll be able to customize your macros, change keybindings, and activate alternate layouts (there modifiers for mac users as well).  For the RGB enthusiast, you can also customize the per-key lighting with presets (or your own style) as well as the lighting on the sides of the board.

The last thing I want to touch on is my actual gaming experience.  If you like Kailh Box switches I would put money on liking the keyboard.  Each key press feels smooth on the red switches without feeling loose at the same time as I’ve experienced with other brands.  Being able to swap out to my favorite switch type for the WASD keys did nothing but elevate my general experience.  Messing around with the tenting options I found it to be much more comfortable of an experience during long gameplay sessions and noticed less fatigue in my hands and wrists at the end of the day.  The keyboard is absolutely tiny - granting an enormous amount of desk space for mouse movements - and while the arrows keys and, to an extent, the function row is missed it’s completely offset by the amount of sensitivity I could shave off my mouse thanks to increased space. 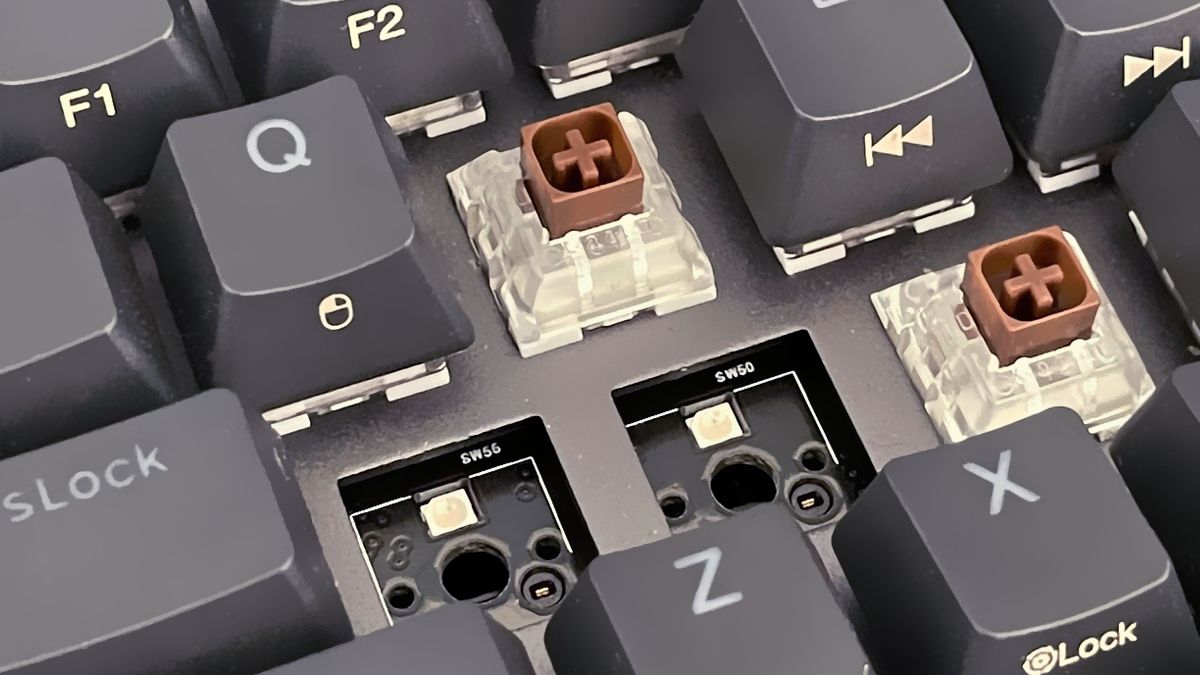 The Kinesis TKO Tournament Keyboard is hands down one of the best keyboards I’ve had the pleasure of using.  While the high price tag will definitely scare off some prospective buyers Kinesis really did spare no expense.  From the PBT double-shot keycaps to the hot-swappable Kaihl Box switches (with extras!) it didn’t take long to figure out why this premium keyboard came with an assuredly premium price.  But don’t take my word for it - it comes with a 60-day risk-free trial period (when purchased directly from Kinesis) so if you don’t think it’s worth the money, no harm no foul, though I have a feeling you won’t want to let the board go once you’ve spent a day or two with it.

The product discussed in this article was provided by the manufacturer for the purposes of review.
8.5Great
Pros
Cons
Tags
Mechanical Keyboards
Peripherals
Kinesis