Artisanal earphones. Before this month, I wouldn’t have known what that meant, but thanks to the Kinera Freya, I do. Inspired by the Nordic goddess of the same name, these earphones are hand-painted by an individual artist to create something that is truly unique and eye-catching. It’s not all looks, though. Each earphone also features an impressive four-driver array with three balanced armatures and a single dynamic driver. It’s a premium package aimed directly at the audio enthusiast. Is it the right choice for you? 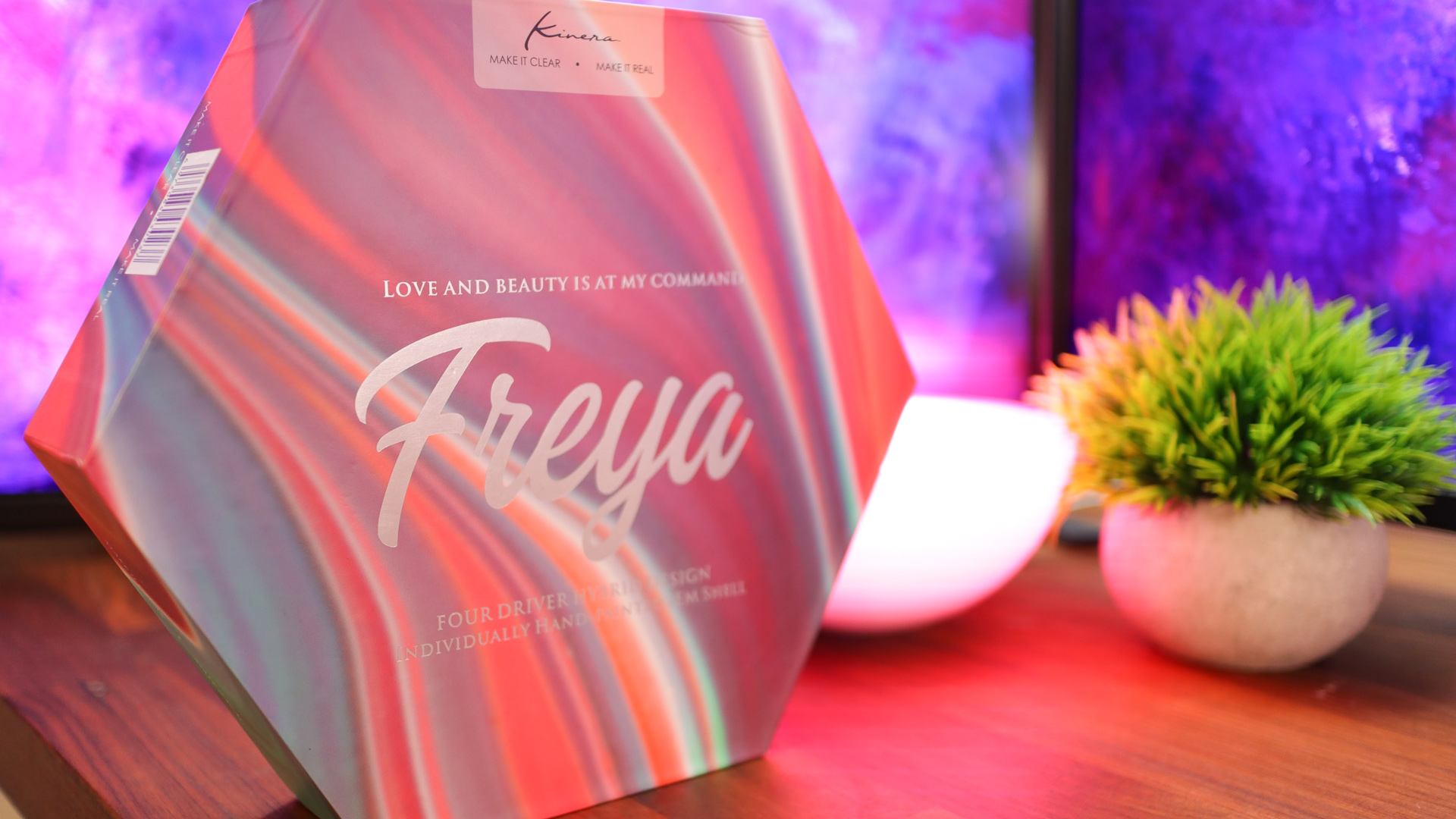 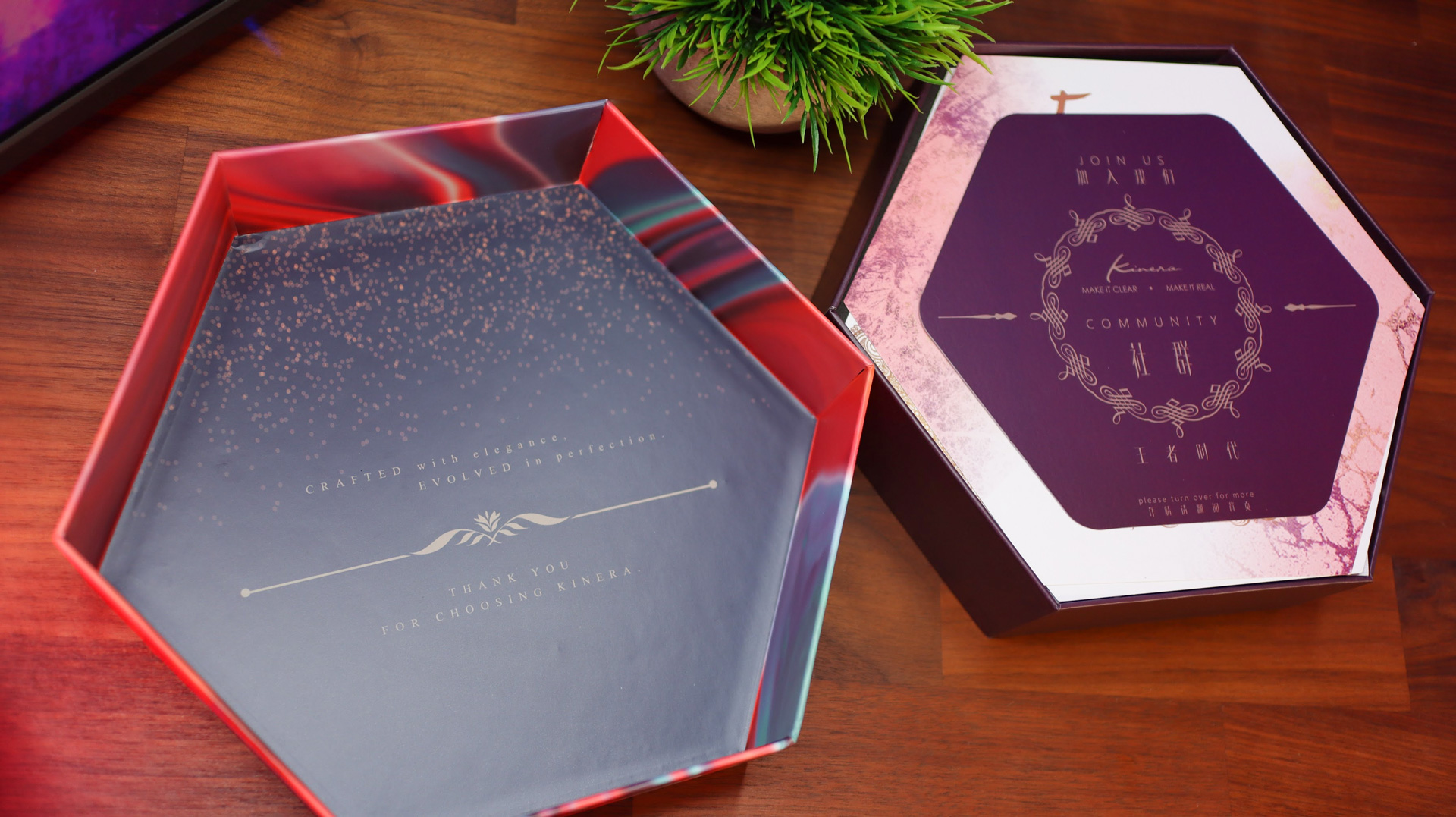 Kinera wasn’t always its own brand and that’s worked to its benefit. Instead of hitting the headphone scene with its own products out of the gate, it produced speakers for other companies and conducted their own research, earning more than 20 acoustic patents. With the Kinera brand, it's bringing that experience to bear on a range of earphones across the price spectrum.  The Kinera falls squarely in the middle of its catalog, coming in at $249 — expensive, to be sure, but considering the company sells headphones in a range from $29 to $1399, the Freya represents a middle-ground between their mainstream and ultra-premium models.

The Freya are certainly out to impress. They arrive in a big, hexagonal box that is beautifully prepared. The packaging is very feminine and painterly. There are two inserts describing the product, its inspirations, and the process of its creation. According to the inserts, each IEM takes three hours to create from start to finish. There’s even a letter from the artist that goes into detail on why each color was used and how it relates to the goddess Freya. This is the kind of explanation you hear first-hand at an art exhibition and really plays into the unique design of every single earbud. 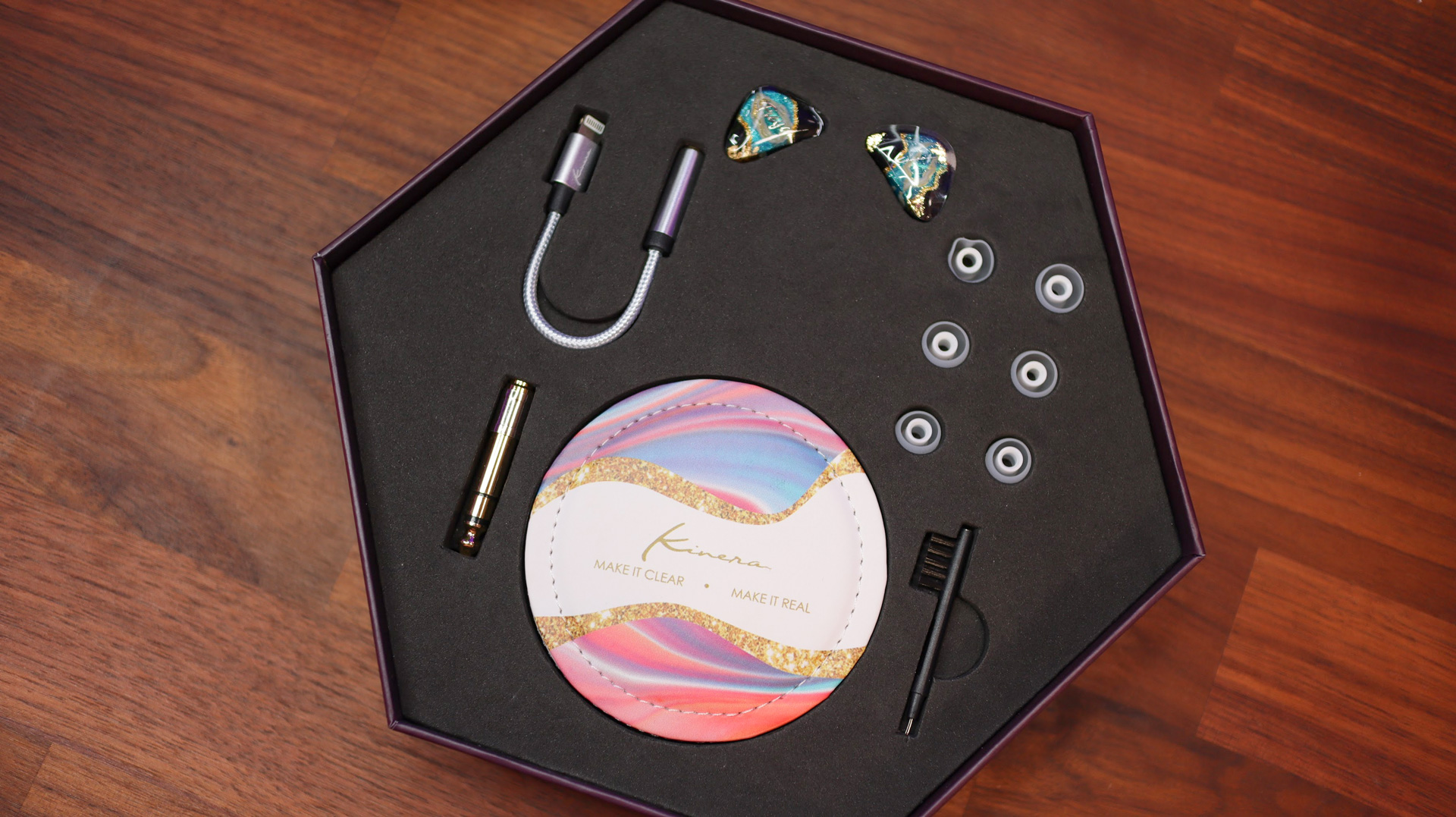 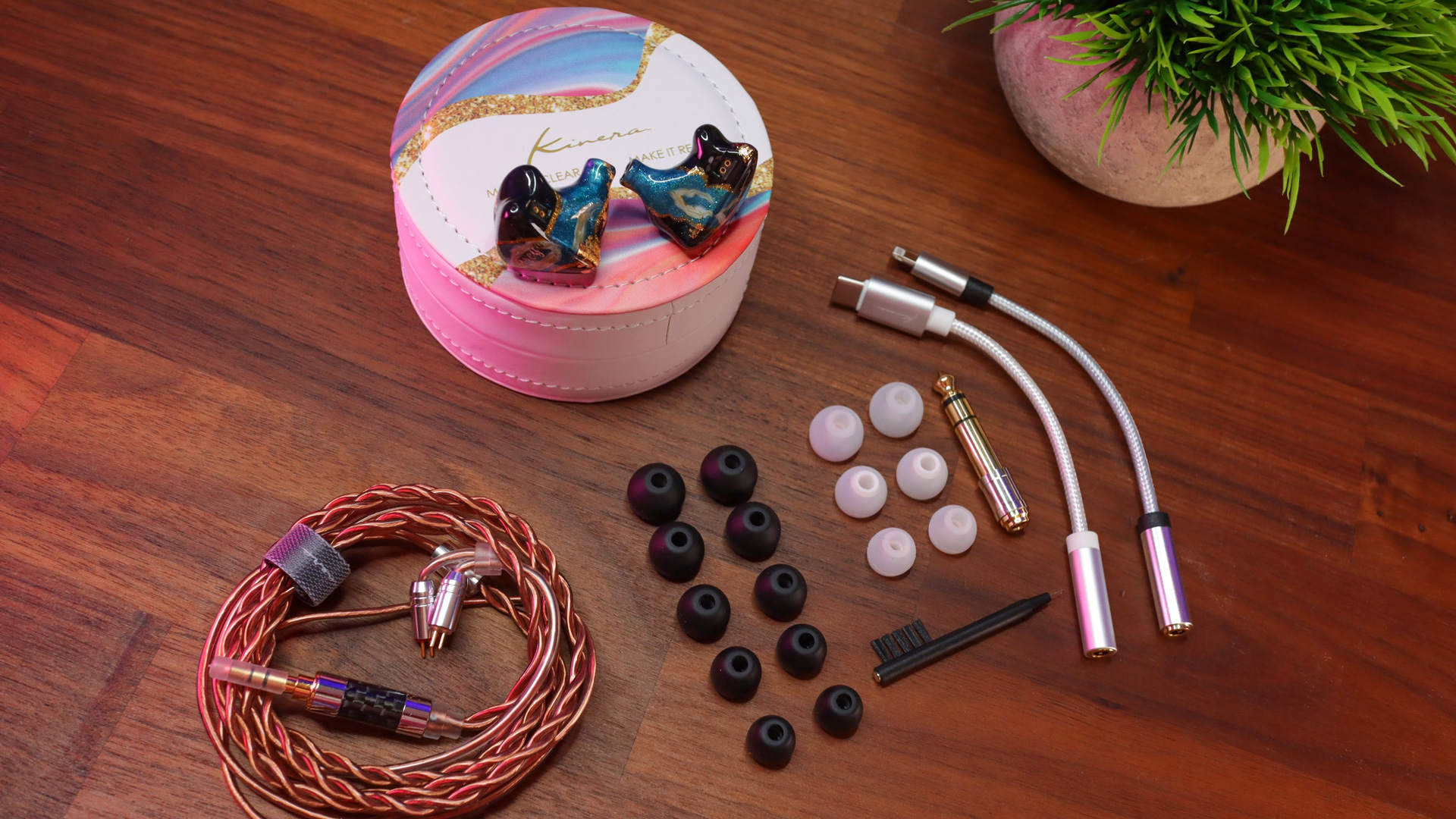 Underneath all of that is the product tray. It’s a generous package. In the main tray, you have the IEMs themselves, a large case, a 3.5mm to 1/4-inch adapter for iPhone use, six silicone eartips from Final Audio (another premium audio brand), a cleaning tool, and a Thunderbolt to 3.5mm audio adapter. Inside the case is another array of goodies, including an additional five pairs of silicone tips from Final, an excellent copper cable, and a USB Type-C to 3.5mm audio adapter for Android.

The package here is the best I’ve ever seen with a headphone, including those at literally twice the cost. Name brand tips, that cable, and two dongle DACs? That’s excellent. My only gripe is that the case is much too large to carry in a pocket. It’s actually much closer to a small jewelry box (which confused my wife when she saw it on my dresser), but it will transport all of these accessories with room to spare. 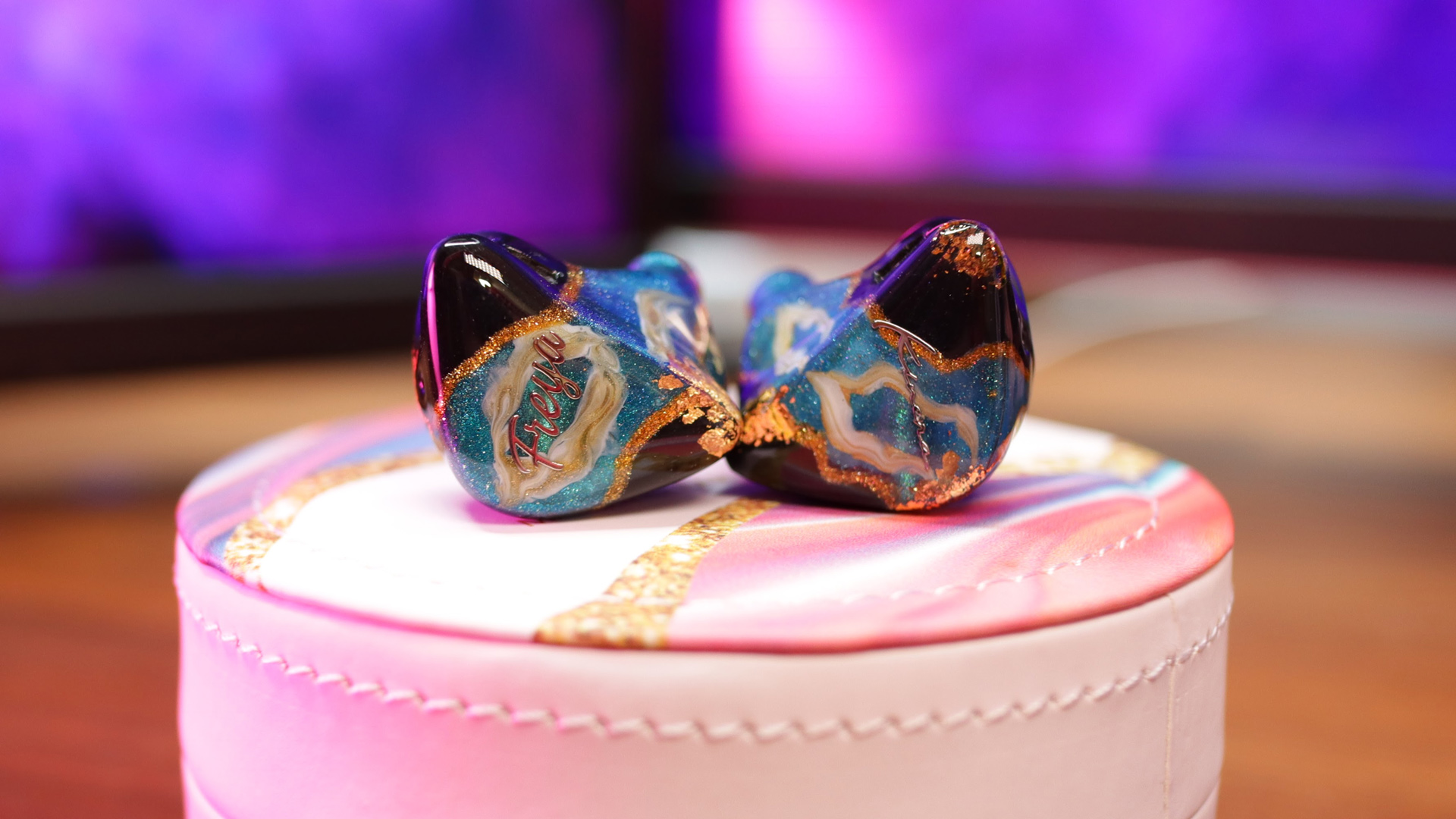 Onto the headphones themselves. The Freya is available in two colors, based around white or black. I received the black version and the custom paint job looks excellent. There’s a very celestial look to them, with the gold hinting at Freya’s affinity for luxury. The white version makes heavy use of pink and purple for a very feminine look. The black version I received points to its black as evocative of Freya’s armor. I much prefer the black, which is likely to be the case for many men considering these. This type of opulence isn’t for everyone, but I personally find it very eye-catching and unique.

Inside its resin shell, the Freya uses a quad-hybrid design with four drivers for each ear: three balanced armatures and a single dynamic driver. Using an internal crossover, it uses this array to split the frequency spectrum, limiting the scope of each driver to promote better clarity and fine tuning of each. The multi-driver design has become much more common, even in affordable price brackets, and for good reason. We all want clearer audio without distortion and this is an effective way to achieve that while also giving the audio engineers more room to customize the overall sound. 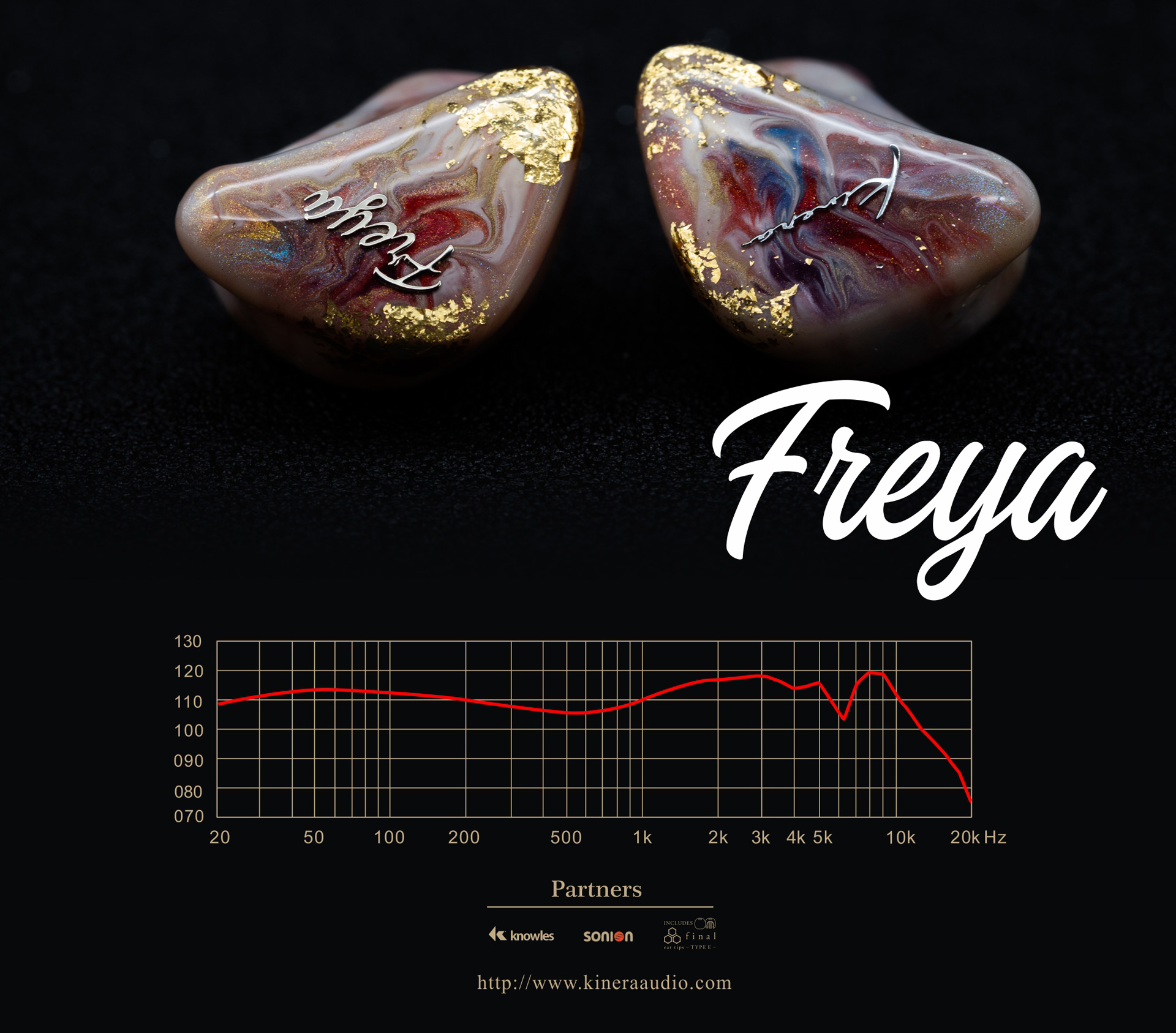 As you can tell from the chart above, the tuning Kinera has gone for follows a gentle V with an increased emphasis on the mids and highs. At the same time, we see a slight bump in the bass from 40 to just under 200 Hz to give music, movies, and games more “oomph” and low-end thrum. This is a fairly safe tuning but by the chart alone, the peak at 8kHz threatens to make the Freyas a little sharp.

Thankfully, in my listening, the Freya sound remarkably well rounded. The treble boost isn’t sharp but it does draw out the fine details in acoustic music and in tracks that emphasize strings and cymbals. In Coheed and Cambria’s Pearl of the Stars, these headphones did a wonderful job recreating the acoustic guitar and the sparkle of the fingerpicked notes. In more pop-oriented tracks, like PVRIS’s Hallucinations, the vocalist was slightly forward, a step in front of the bass synth. The low end wasn’t overstated, giving a good sense of scale without necessarily being bass-heavy. 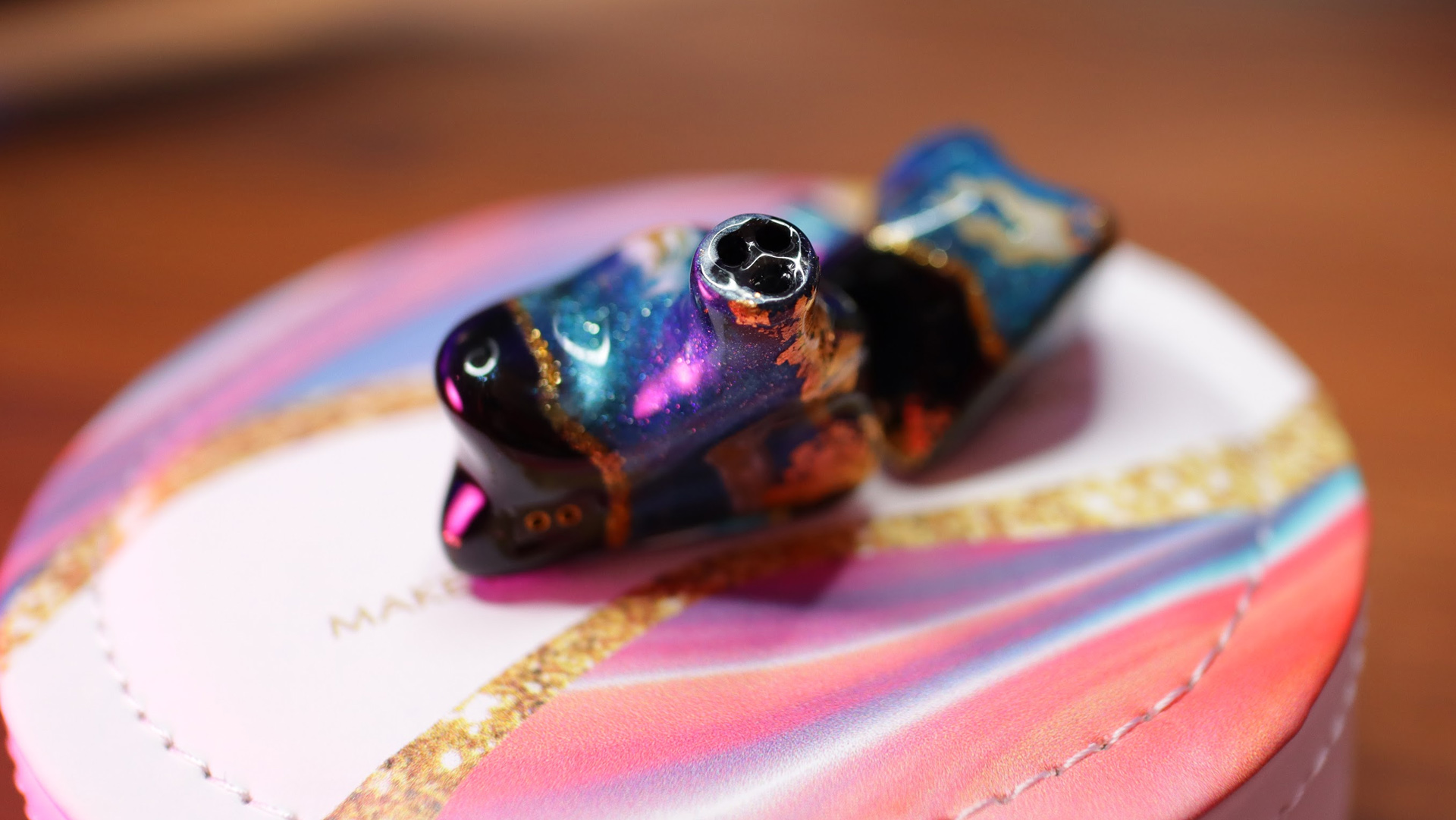 For gaming, the Freya’s are actually quite good. The soundstage is reasonably good for an IEM but is still more intimate than an over-ear headphone. The layering of sounds — think of a mix in layers of overlapping sounds — is excellent, so picking apart details like footsteps, callouts, and even ambient cues like chirping birds are easy to pinpoint, even before you see what’s making them. That high-end boost is excellent for competitive games especially. Like all IEMs, I recommend using Windows Sonic or Dolby Atmos to expand the soundstage and take advantage of surround sound on your PC.

I also found that the earphones fit very snugly in my ears. The shells are molded in traditional IEM form to match the contours of a “universal ear.” They’re larger and stick out slightly, but are remarkably comfortable. The Final Type-E ear tips are also very good. Before trying them for myself, I had my doubts on how different they could possibly be from the cheap options flooding Amazon, but they fit comfortably in my ears without the underwater pressure that sometimes accompanies low-cost ear tips.

Going Bluetooth with the Fiio BTR3K - Amped Up

For most of my testing, I plugged the Freyas into my Samsung Note 9 and used the onboard DAC. It worked well, but the headphones respond very well to extra power. Along with the earphones, HiFiGo sent along the Fiio BTR3K Bluetooth Headphone Amp. The Fiio takes things a step beyond a normal dongle DACs by adding high resolution Bluetooth functionality and a higher output voltage than a standard smartphone.  Here’s a rundown of the specs:

It’s an interesting device because it adds wireless functionality to wired headphones… but the headphones still connect to them with their wire. It might seem counterintuitive until you see how small it is. 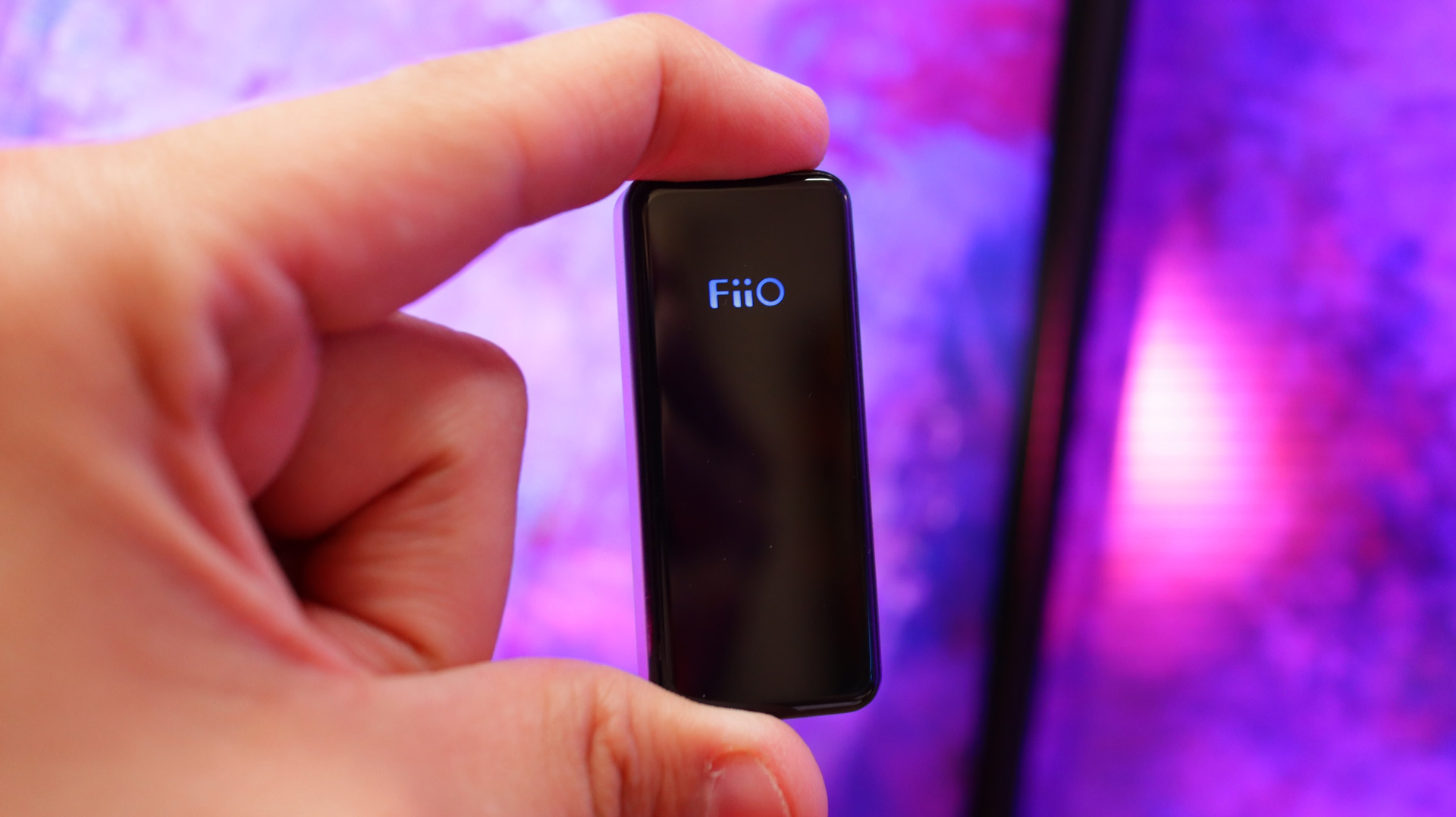 The BTR3K is tiny which makes it much more versatile than I initially thought. You can slide it into your pocket or use the included case to clip it to your collar or sleeve when you’re out for a run. If your phone doesn’t have a headphone jack, you’re probably using some kind of dongle anyway. This tiny device will allow you to reroute your cable in a way that’s more convenient without taking up the extra space of your full phone.

That said, it’s clearly larger than a standard 3.5mm adapter, so what do you get for that extra size? Lots of extra power, a great DAC, and high-resolution audio codecs. This tiny device is able to output 25mW into 32 ohms, which should provide a substantial volume boost compared to your average dongle or even full-fledged smartphone. It’s not all volume, though. That added power definitely enhanced the bass and soundstage of the Freyas without having to make them exceptionally loud.

Under the hood, the BTR3K supports a dual AKM AK4377 DAC. Audio comes through exceptionally crisp, and if you have high-res rips from CD or FLAC files, you’ll be able to enjoy them in all their glory. It also supports a wide range of enhanced Bluetooth codecs including AAC, aptX, aptX HD, aptX Low Latency, and LDAC. Listening over LDAC, I wasn’t able to hear any difference from the wired connection, which hasn’t always been the case in the past.

The overarching impression I’m left with is that the Freyas look great, sound great, and play it safe. They don’t push too heavily into any one direction, even with the slight enhancements to bass and treble. I enjoyed listening to everything from metal, to pop, the light acoustic and they performed admirably but because they didn’t “pop” in any one area, I’m left with appearance as their most remarkable quality. Whether you’re listening to your favorite group or popping in for a quick round of Call of Duty, the Freyas are up to the challenge, but if you’re a bass-head or need that sparkling high-end detail, a touch of EQ may be in order.

The product described in this article was provided by the manufacturer for evaluation purposes.
8.5Great
Pros
Cons
Tags
iems
audio
Lifestyle Tech