Keychron has been on fire this year, opening up the custom mechanical keyboard market to the mainstream in a way no other brand has done before with its Q series of keyboards. Keychron has been steadily filling out this line-up with different form factors, and today it’s finally realsing its full-size model, the Keychron Q5. It features the same double-gasket mounted design, CNC milled aluminum case, and dual OS compatibility, and hits the market for an early-bird price of $185. If you need a numpad, the Q5 is the absolute unit of a keyboard and the model you’ve been waiting for. 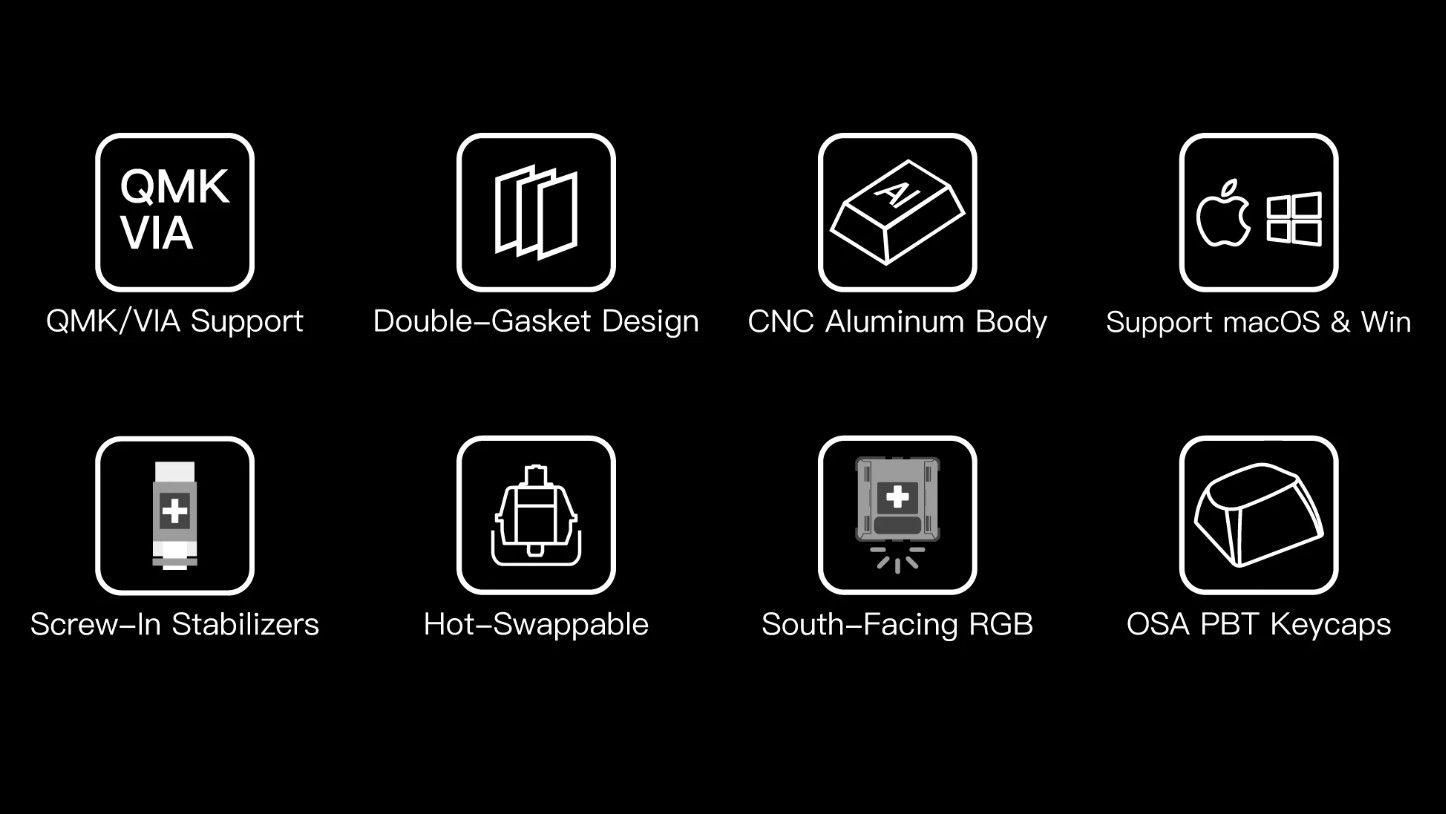 The Keychron Q5 follows the same design principles as the earlier keyboards in the Q line-up. In that way, it’s much the same as the previous Q keyboards we’ve reviewed, but the Q5 does stand apart in several interesting ways. But first, let’s get the basics out of the way. 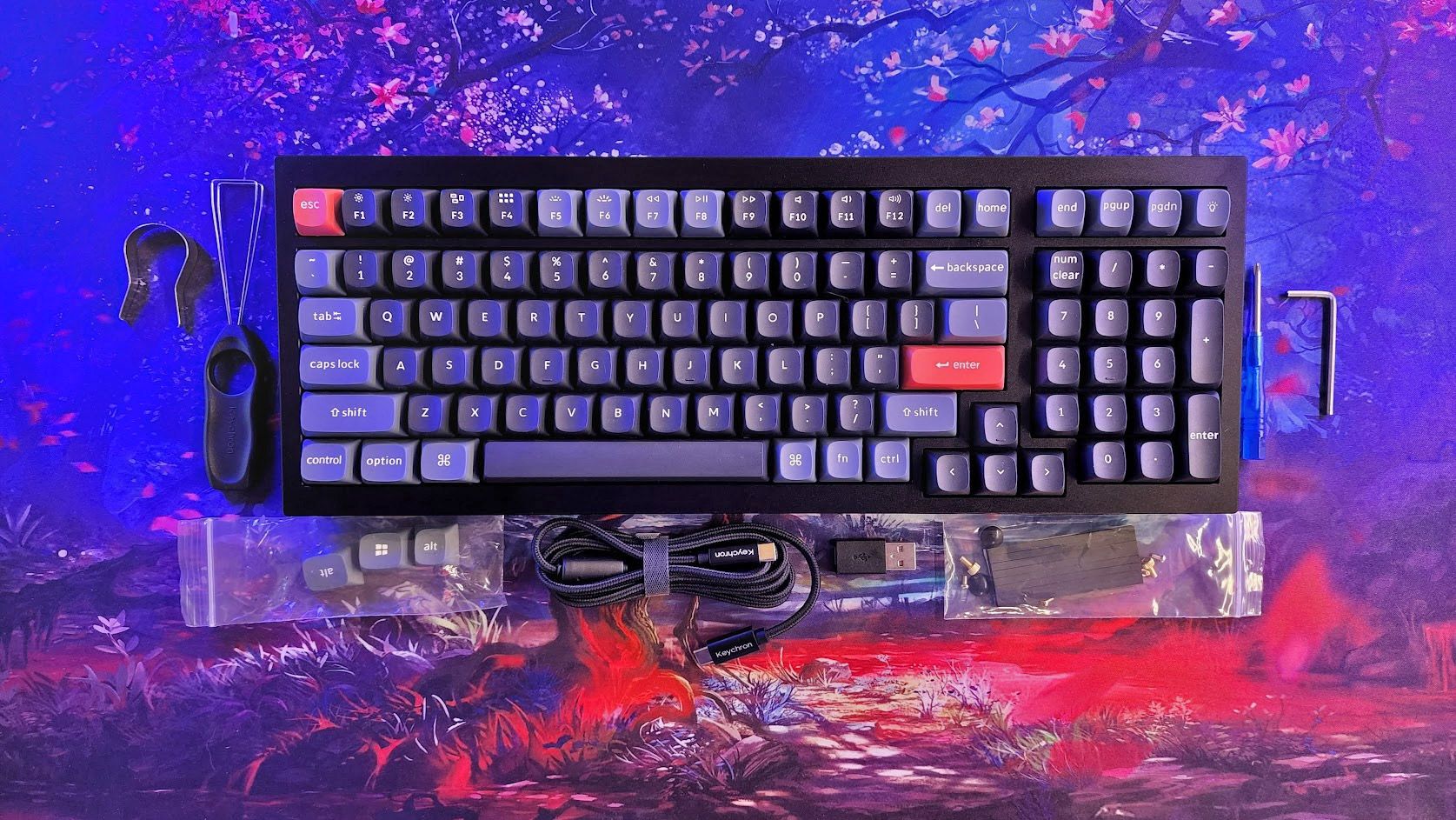 The Q5 is a tank of a keyboard. It features a two-part aluminum case available in black, blue, or gray, and is much heavier any gaming keyboard I’ve ever used. That weight lends it a more premium feel and helps to ensure it won’t slide around on your desk. Inside that shell, it supports hot-swappable switches and is packed to the brim with enthusiast-favorite features.

The biggest of these is the gasket mount implementation. While most pre-built keyboards use a tray or top mount, where the plate and PCB screw into the bottom or top case respectively, the Q5 holds sandwiches this assembly between both halves of the case. Where they meet, strips of poron foam cushion the plate, leading to a soft, isolated typing experience.

The case also makes use of additional foam layers and a second set of gaskets. To further isolate typing sounds, there’s a foam layer between the plate and PCB. To remove some of the hollowness and ping that comes with aluminum cases, a second layer of porous foam sits below the plate and PCB. To further reduce ping and hollowness, a set of rubber pads are positioned around the holes for each fastener. These act as a second gasket, interrupting the travel of typing sounds from the top to the bottom case.

The enthusiast features don’t end there, either. The PCB supports screw-in stabilizers, the most popular choice in the enthusiast world due to their added stability and improved feel under the finger. This also means you can use higher-end stabilizers like Durock V2s. The switches are also south-facing, which means the LED is on the bottom of the switch instead of the top. Not great for backlit keycaps but it ensures the keyboard is compatible with aftermarket keycap sets. 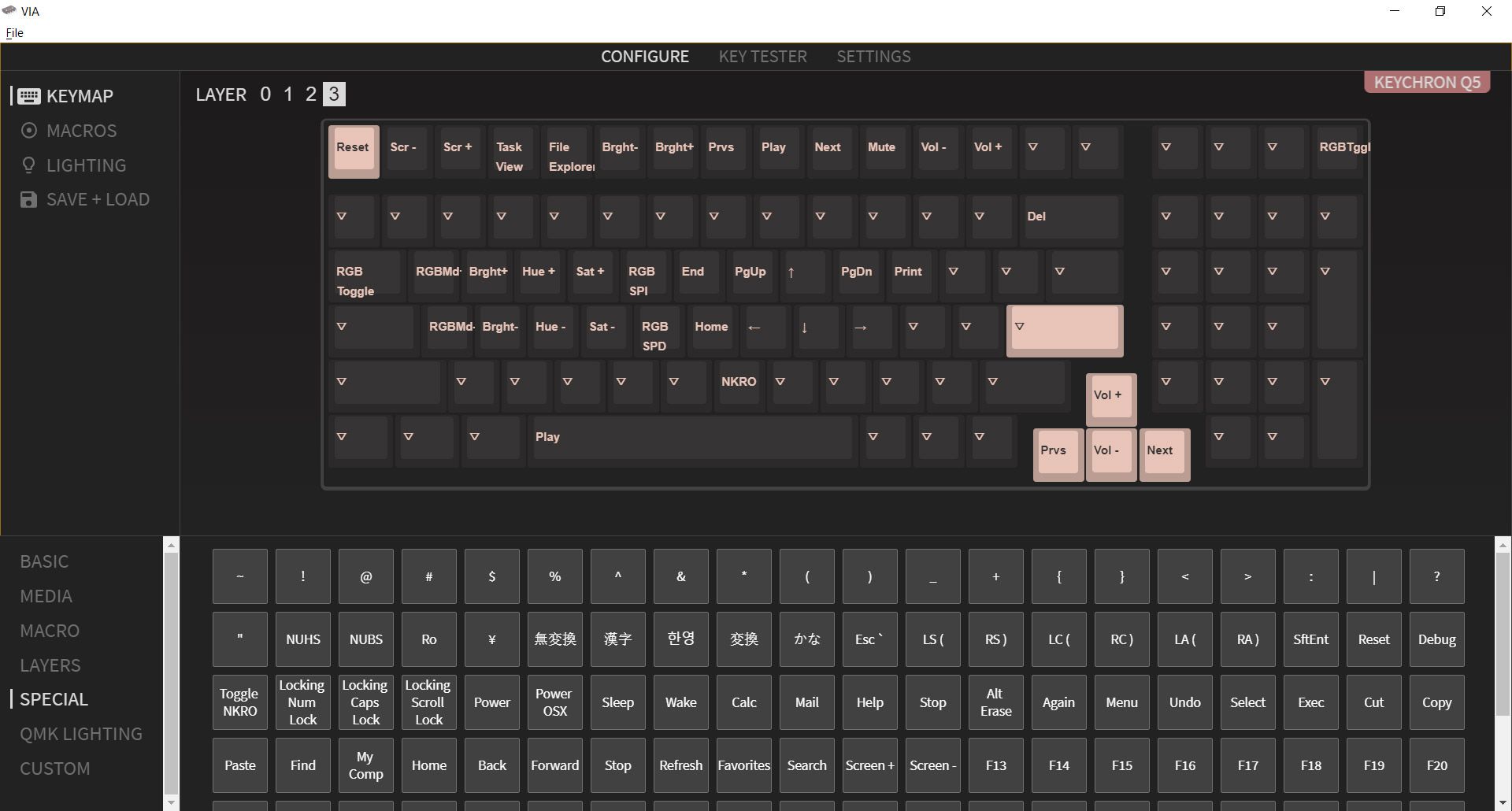 Finally, and importantly, the keyboard is programmable with QMK/VIA. This open-source firmware allows you to rewrite how the keyboard functions using an easy-to-grasp GUI. You simply tap a key and then choose what you want to replace it from a list. You can also program advanced commands, like dual-function keys, across multiple layers of keymaps. These changes then live on the keyboard itself, which means you won’t need any software to use those settings, even if you take it to a different PC. It explodes the functionality of the keyboard and is a major asset to its overall appeal.

Unlike the other keyboards in the Q line-up, the Q5 uses a compact full-size layout known as “1800.” This layout removes several keys from the navigation and editing cluster and moves them above the Numpad, which is then shifted to the left. It’s only slightly larger than a TKL but has all of the most used keys, excepting Print Screen, Scroll Lock, and Pause, all of which can be added back in. It’s an exceptionally functional layout that’s great for work and gaming. 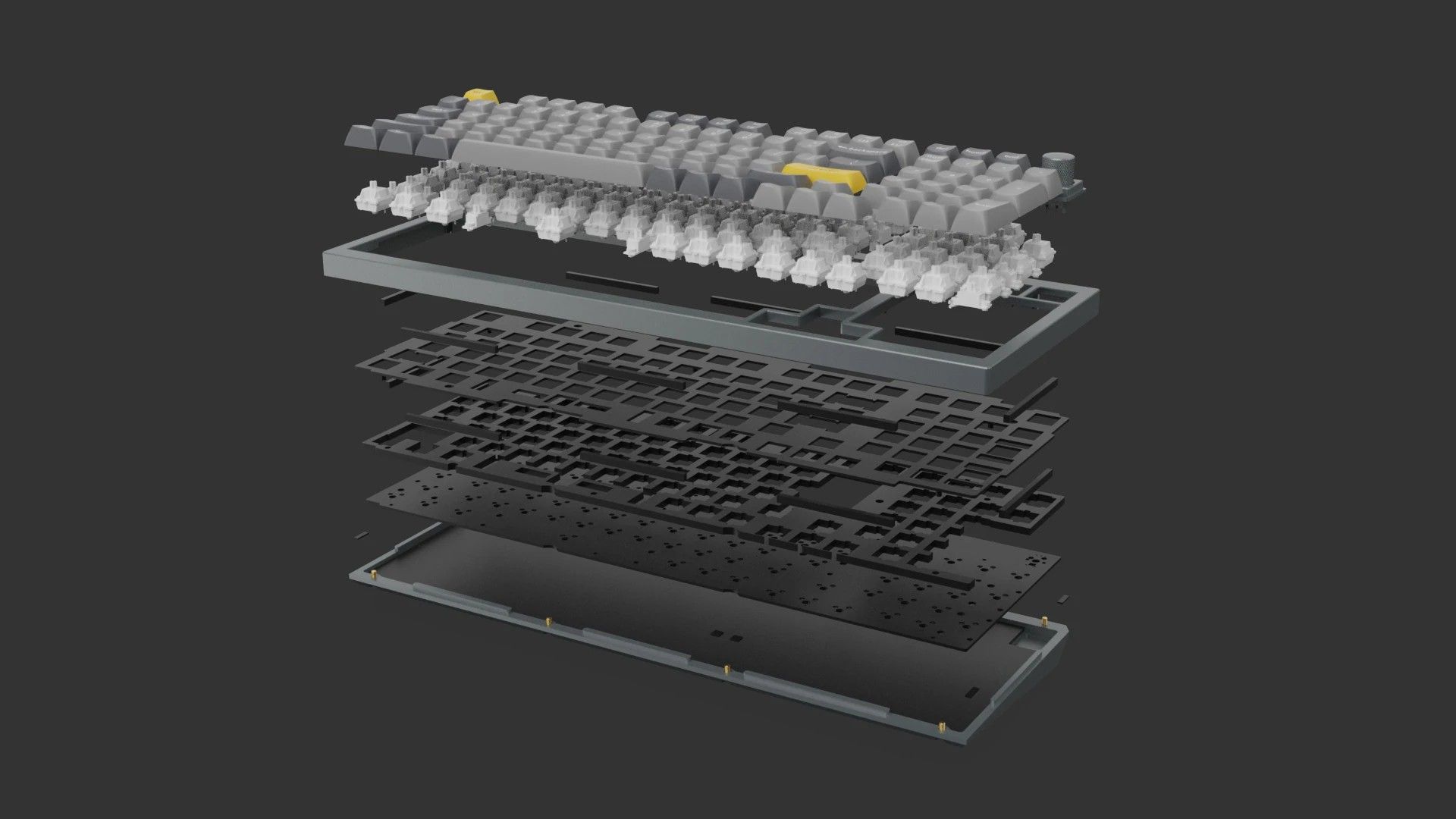 The layout also takes some liberties with where certain keys are positioned. The function row is spaceless, making room for two more keys. Keychron uses these for Delete and Home, then there’s a gap, followed by End, Page Up, Page Down, and a lighting control. There’s a second version of the keyboard that swaps the lighting button for a volume knob, if you’d rather have that. It’s a rather odd arrangement up top, but it works well. Media controls are embedded as secondary functions into the number row. There are no secondary functions built into the number pad itself (unlike a normal fullsize keyboard).

The Q5 is available in barebones and pre-built configurations for slightly only $20 more ($165/$185). The fully assembled version includes doubleshot PBT keycaps and Gateron G Pro switches, which are pre-lubed at the factory. I would encourage anyone interested in this keyboard to go for the fully assembled version as this is a better detail on a set of switches than you’re likely to find purchasing separately. 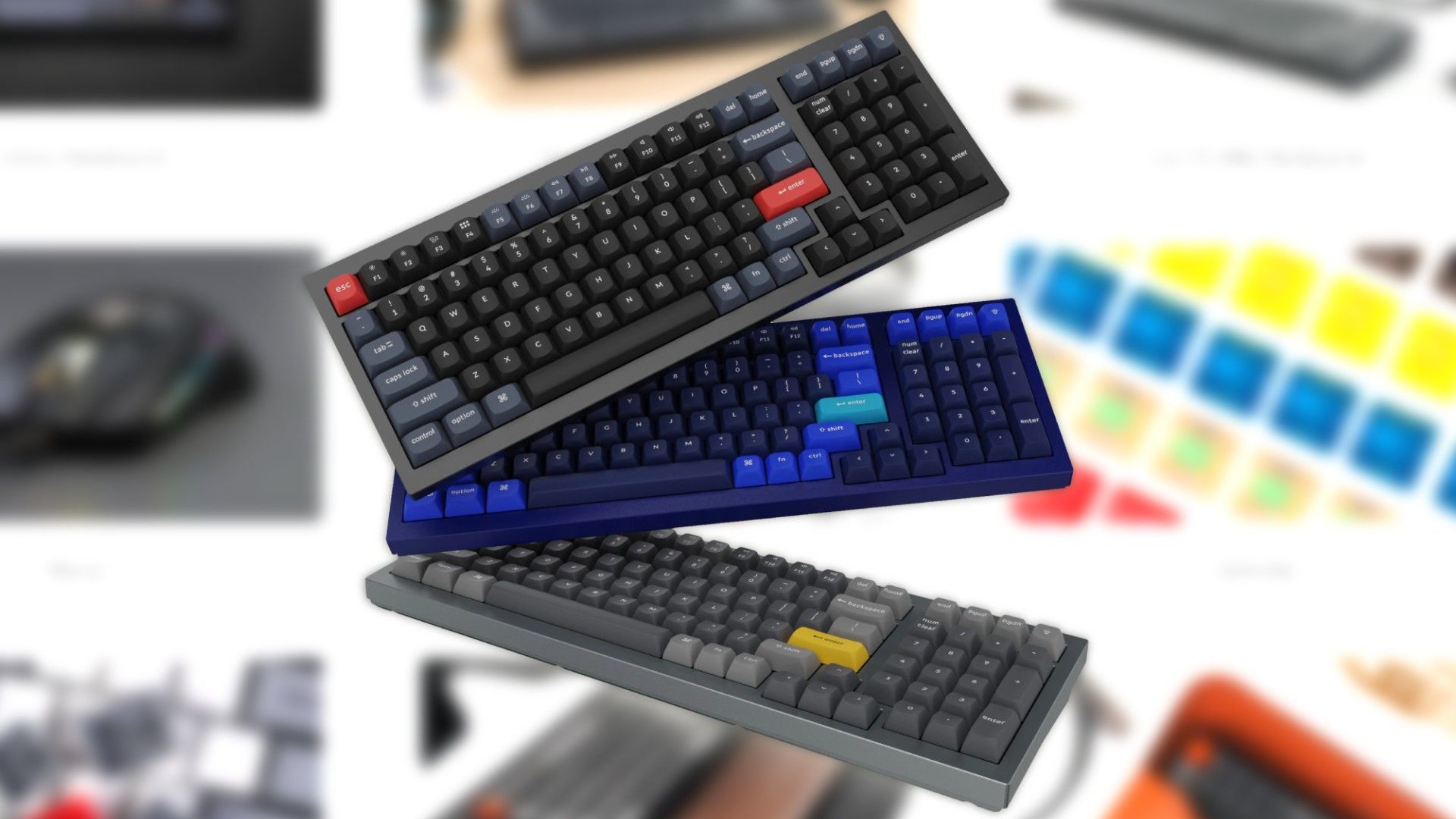 The keyboard also includes native support for Windows and Mac operating systems. You can swap between these layouts on the fly using a switch on the back of the keyboard, and Keychron includes a set of alternate caps in the box. In truth, this switch manually swaps between programmed layers on the keyboard, so if you only use one OS and don’t want to fuss with hotkeys, you can remap the opposite OS layer to something more useful, like a keymap for a specific game.

The typing experience on the Q5 is very good, but there are some important qualities you’ll want to know about before you begin. First off, the G Pro Red switches are excellent. They’re smooth and lightweight, easily trumping Cherry MX Reds in every way. They have a lightweight sound that won’t compete with higher end switches, but they remain excellent stock switches.

Unlike the Q1 and Q2, the Q5 really is not very flexy. You can make the keys depress if you press down hard, but it’s nothing you’ll see without actively looking for it while typing normally. This is a common characteristic of full-size gasket mounted keyboards as the plate is much larger to accommodate the layout. Instead, this is very much a gasket mount keyboard based on isolating typing sounds.

And it does a very good job at that. Typing sounds are honestly quite muted, which you may or may not like. I swapped in a set of Gateron Black Ink switches Gateron included, and though they felt very nice, they lost some of their unique sound profile on the Q5. That said, this is pretty subjective. I don’t mind a more muted sound profile and that’s actually a benefit if you plan on using this keyboard in an office where clacky keys aren’t appreciated.

I love the 1800 layout and found the Q5 to perfectly balance work and gaming. It’s compact enough that it doesn’t take up much space on the desk but still has enough buttons to play keyboard-centric games like Microsoft Flight Simulator.  The numpad also doubles as a macro pad in MMORPGs, which is very nice. When I do need to work, I don’t have to hunt for key combos for basic functions like navigating pages and lines. All of the most important keys are there, except for Print Screen which I had to add manually. 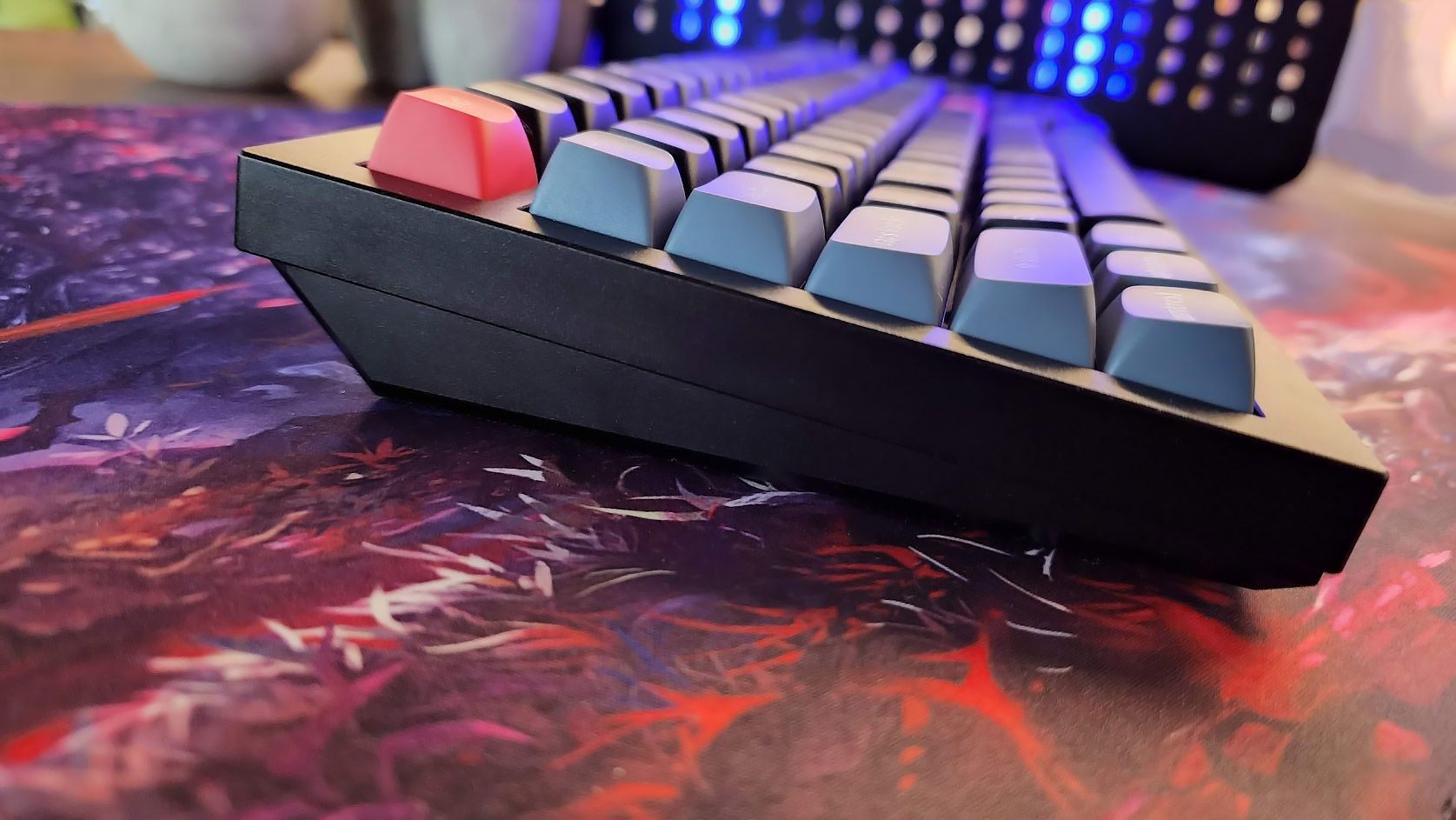 To make the most of the keyboard, I do recommend applying a handful of simple mods. To deepen the typing sounds, I applied two layers of painters tape to the back of the PCB. I then put squares of black electrical tape on top of the silicone gaskets to increase their effectiveness. It wasn’t explicitly necessary since they come pre-lubed from the factory, but I also added a bit more lube to my stabilized keys to increase their softness and bring them in line with the rest of the keys. Finally, I swapped keycaps to the DCX White on Black set I reviewed last month.

If you’ve seen other Keychron Q-series keyboards, you’ll have a good idea of what to expect here. The Q5 continues its legacy of delivering excellent enthusiast-level features at entry-level friendly prices. I’ve recommended prior Q keyboards to friends interested in the hobby and I’m happy to do so again here. If you need a numpad, the Q5 is a great option and an excellent platform to delve further into the custom mechanical keyboard hobby.