Keychron has been on a roll this year, releasing its line of enthusiast-grade-yet-affordable custom mechanical keyboards with its Q-series. Today, we’re looking at the third entry in the line-up, the Keychron Q3. Like the Q1 and Q2, it features a fully aluminum case and a gasket mount design for a soft, satisfying typing experience. It’s also available fully assembled with switches and keycaps or at a discount if you’d like to bring your own. This time around, Keychron has opted for the traditional TKL layout, making it a good fit for mainstream typists and gamers who aren’t ready to make the jump to a compact form factor.

Retailing for $154 for a barebones kit and $174 for a fully assembled version (plus $10 if you’d like an aluminum volume knob), this is yet again one of the best ways to upgrade your typing experience without breaking the bank or going all-in on custom switches and keycaps.

Like the Q1 and Q2 before it, the Keychron Q3 is out to make a big first impression. It’s a heavy, premium-feeling keyboard and comes packed to the gills with enthusiast tier features, like gasket mounting and screw-in stabilizers. It also comes with doubleshot PBT keycaps in striking colors that match the blue, black, or gray case options. If you’re inclined to spend a little extra, you can even purchase your Q3 with a wide array of custom keycaps, switches, and accessories (like switch lube) and save shopping around from multiple retailers.

The ethos behind the Q3 seems to be “enthusiast features for less.” That starts with the case. While we’re all used to the usual design of gaming keyboards — an aluminum top plate and plastic bottom — at this point, the Q3’s case is made from solid aluminum, top and bottom. The plate (which is what the switches snap into and you see as the “top” of many gaming keyboards”) is made of steel. Fully assembled, the Q3 weighs around 4.5 pounds. It has a heft that’s immediately impressive, especially if you’ve never used a custom keyboard before. 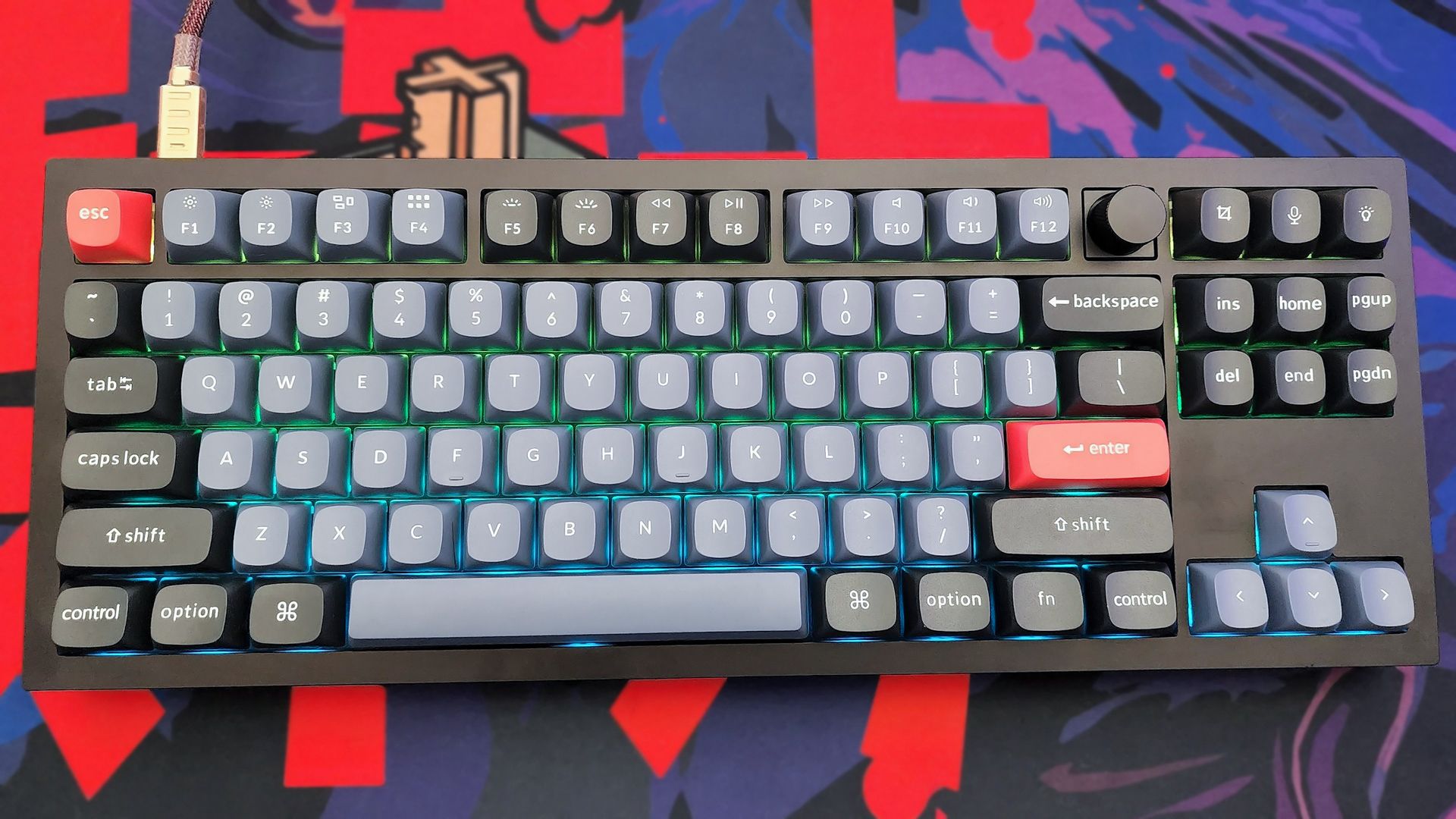 That design consideration extends to the inside of the keyboard too. Sandwiches between the plate and PCB is a layer of foam to dampen keystrokes and quiet typing sounds. Below that, there’s a thin layer of foam in the case to reduce hollowness — though it’s so thin, I’m not sure it’s really doing much.

That’s okay, though, because the design of the aluminum case and steel plate is intentional. Since steel is a denser metal than aluminum, when ringing sounds from typing hit it, they deaden it out. At least in theory. 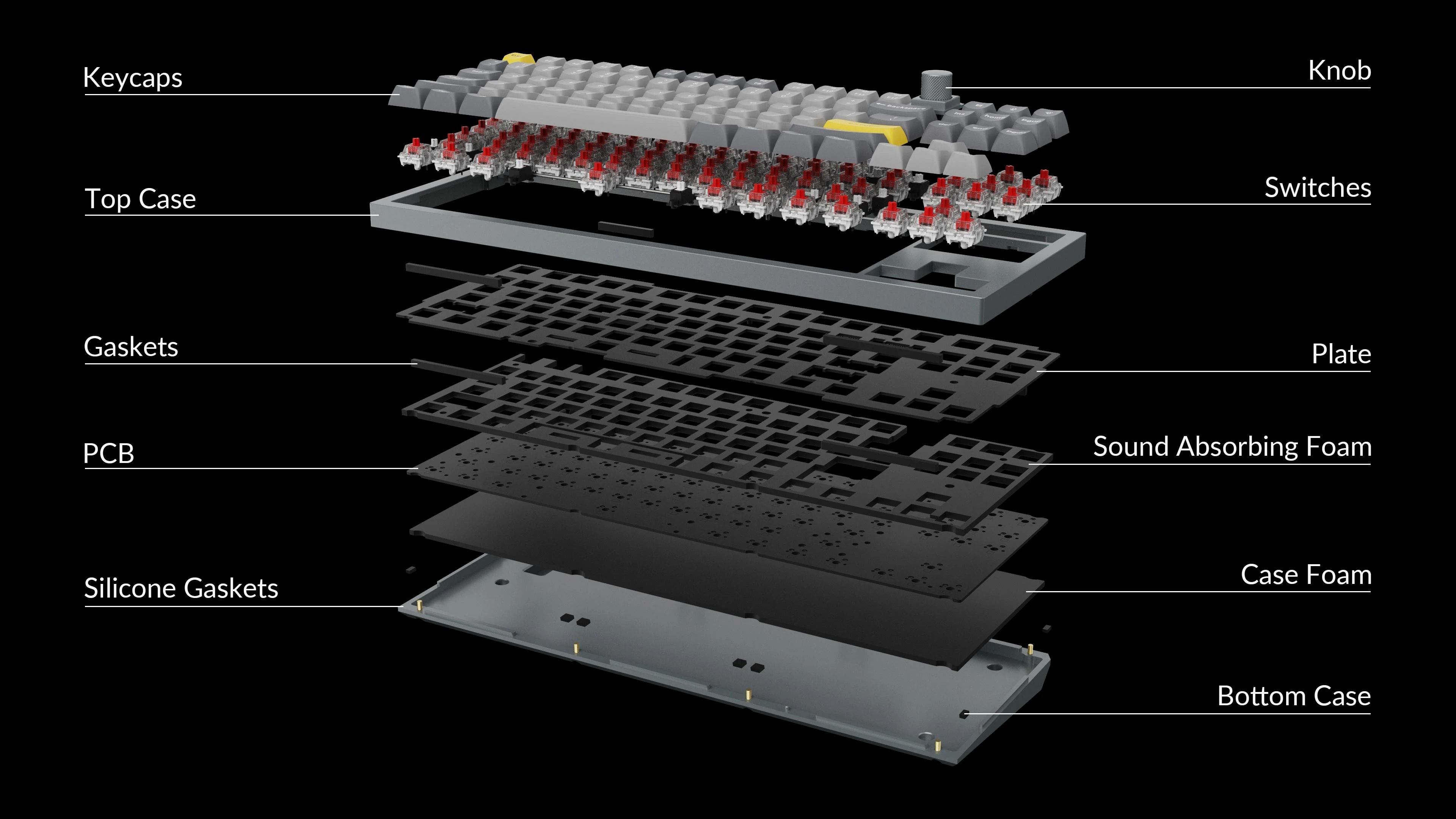 Between the two halves of the case are silicone dampening pads. The steel plate can only do its job if the top and bottom case are separated. Otherwise, those ringing sounds simply bypass the plate entirely and reverberate through the bottom of the case. This is a factory version of the so-called Force Break mod that’s become popular among keyboard modders (whom typically use tape, not rubber) and an easy way to improve the sound of a keyboard. Unfortunately, the implementation here falls short and those reverberations happen anyway, undermining that bottom foam — but it’s an easy fix, which I’ll explain shortly.

One of the most popular features of this line-up is its gasket mount implementation. This is rather new in the mainstream space, and for years everything screwed together rigidly to avoid flex. Gasket mounting, on the other hand, places strips of soft foam around the plate to be squeezed between both halves, not screwed. This better isolates typing sounds compared to older, tray-mount designs, and can provide the keyboard with a bit of flex. This isn’t something you’ll usually feel when typing normally on the Q3, but is easily visible when you press down on a key. It also results in a softer typing experience overall and makes the keyboard feel nicer to use.

The PCB, or circuit board, driving the typing experience supports hot-swappable switches with special sockets that come soldered on the back of the board. It has been a staple feature of Keychron’s keyboards for some time, and I’m happy to see it return here. New switches release weekly, it seems, and simply being able to unplug the switch you’re using and plug-in a new one makes trying new options and exploring the hobby easier than ever. It also supports customizable per-key RGB that’s programmable through VIA and QMK, a free and powerful open-source keyboard firmware. 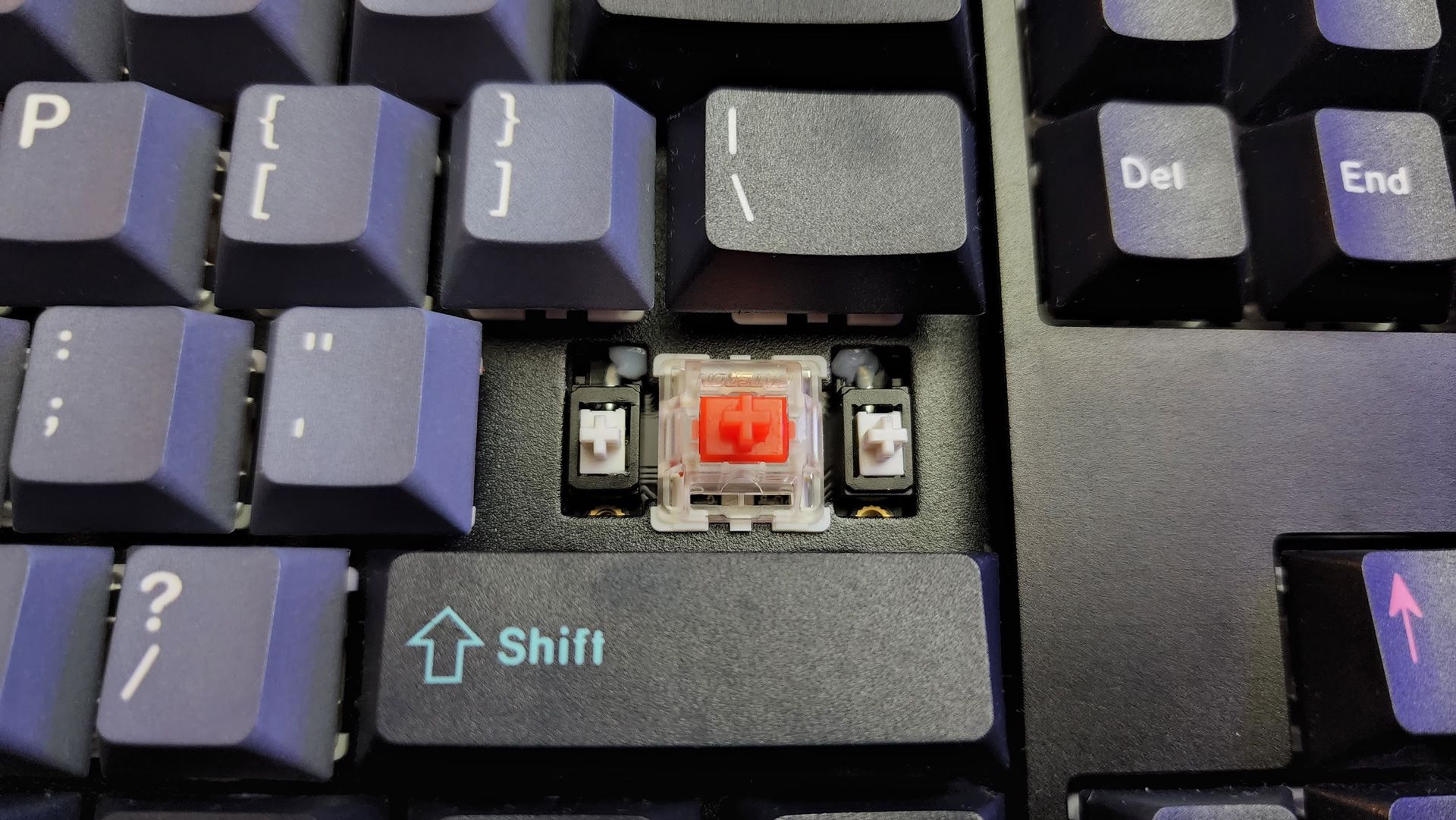 Another highlight you find with the Q3 is its stabilizers. To keep the larger keys from toppling over, they’re supported by a pair of dummy switches called stabilizers, connected by a wire. Most keyboards come with plate mount stabilizers that snap into place and tend to wobble, cause rattle and less stability. Here, they screw right into the PCB for a firm, stable fit and are factory lubed to cut down on rattling sounds that might interrupt the otherwise smooth typing sounds.

If you choose to buy the version that’s assembled for you, you’ll have your choice of Gateron Pro switches and doubleshot PBT keycaps that match the color of the case you choose. The switches are great; they put Cherry to shame. They come factory pre-lubed and are smooth and ping-free out of the box, neither of which are true of Cherry or even normal Gateron switches. If you decide to lube, you can make them even smoother and enhance their sound slightly.

The keycaps, on the other hand, look great but wouldn’t be my first choice. They’re definitely better than the singleshot ABS caps Keychron used to use, but they feature a tall OSA profile that takes some getting used to. Still, the color schemes they’ve gone with are very good. 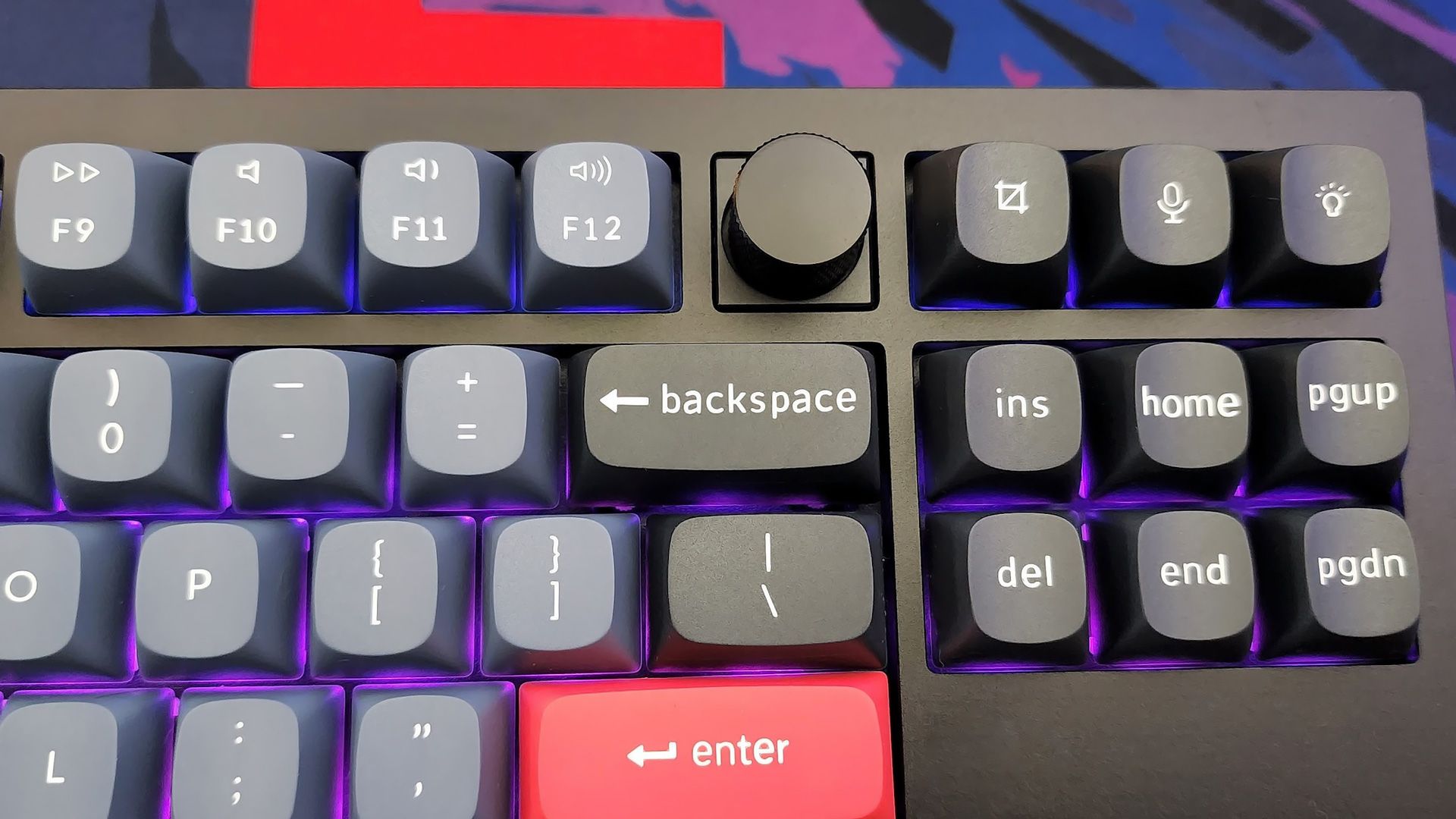 One of the more interesting things with this keyboard is that it’s able to be purchased with a volume knob or an F13 button. This knob has gotten mixed feedback as, well, it looks a little bit awkward. Still, for those that want a dedicated volume roller, it’s there. If you don’t, you can always map those controls to secondary functions and get an extra F13 button instead. I personally like it and have a custom knob on the way (pro tip: guitar knobs with retention screws work well!).

Around the back, you’ll also find a switch to swap between Windows and Mac default layouts. This is, in truth, a hardware-based layer switch and either can be completely remapped within the software. 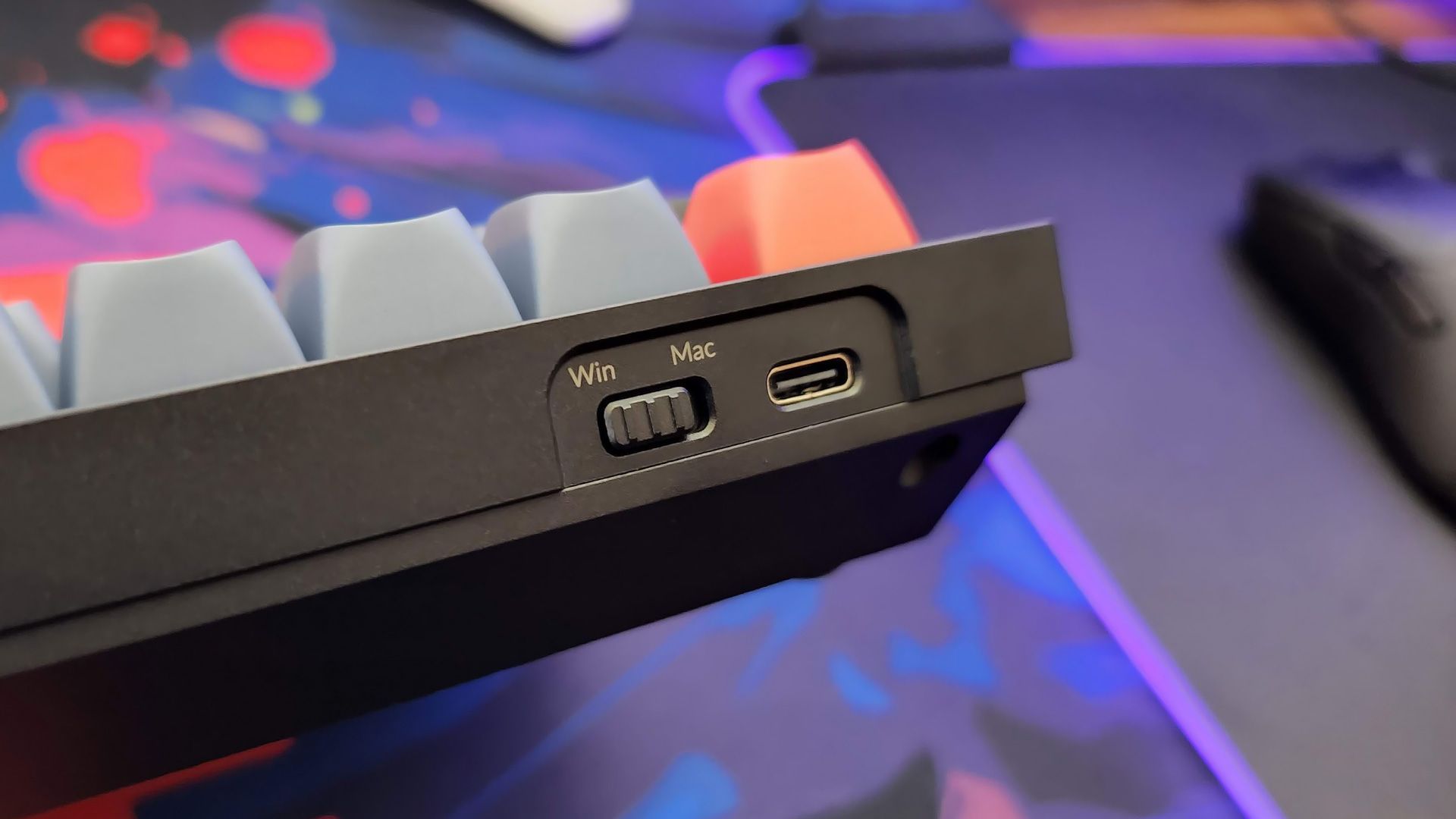 Finally, as I touched on earlier in this review, the Q3 is fully programmable using QMK or VIA. These are open-source firmware that rewrite how your keyboard functions. That means you can remap keys, even giving them dual functions for layer access when held and their normal output when tapped, and then take those changes anywhere you go. It’s freeing and lacks the limits of most OEM software packages.

That said, if you’re coming from Razer, Corsair, or Logitech, you’ll notice that it lacks core gaming features. There are no timers, no lighting integration, and the macro programming is much more simple. If you want to record a key combination to trigger a hotkey — like Alt+1, for example — you’ll need to manually type in the keycodes using a special syntax. If you rely on those functions, it’s worth investing in a separate programming software.

Still, there’s a reason people love QMK and it’s simply this: you can make your keyboard truly your own in a way that’s not possible without it. Once you get used to your custom layouts with primary and secondary functions (up to four layers, in fact), it’s hard to go back.

The Keychron Q3 is, by and large, a great keyboard. Compared to most of what you’ll find at this price, pre-made and custom, it’s well done and satisfying to use — but it’s not perfect.

Let’s go over where Keychron earns its wins first. Right off the bat, the overall build quality remains excellent. The Q3 feels every bit of its asking price. From the packaging to the first time you pick it up in your hand, it’s an impressive upgrade from the majority of pre-made keyboards out there today.

I also have to appreciate how cost-effective this keyboard is. At $174 for the assembled version, it’s a steal for what you’re getting here. Even if you plan on changing switches and keycaps, that Keychron is only charging another $20 from the Barebones version is generous and an excellent deal. The cost is really a great demonstration of how much more cost-effective custom keyboards can be when mass production enters the chat. 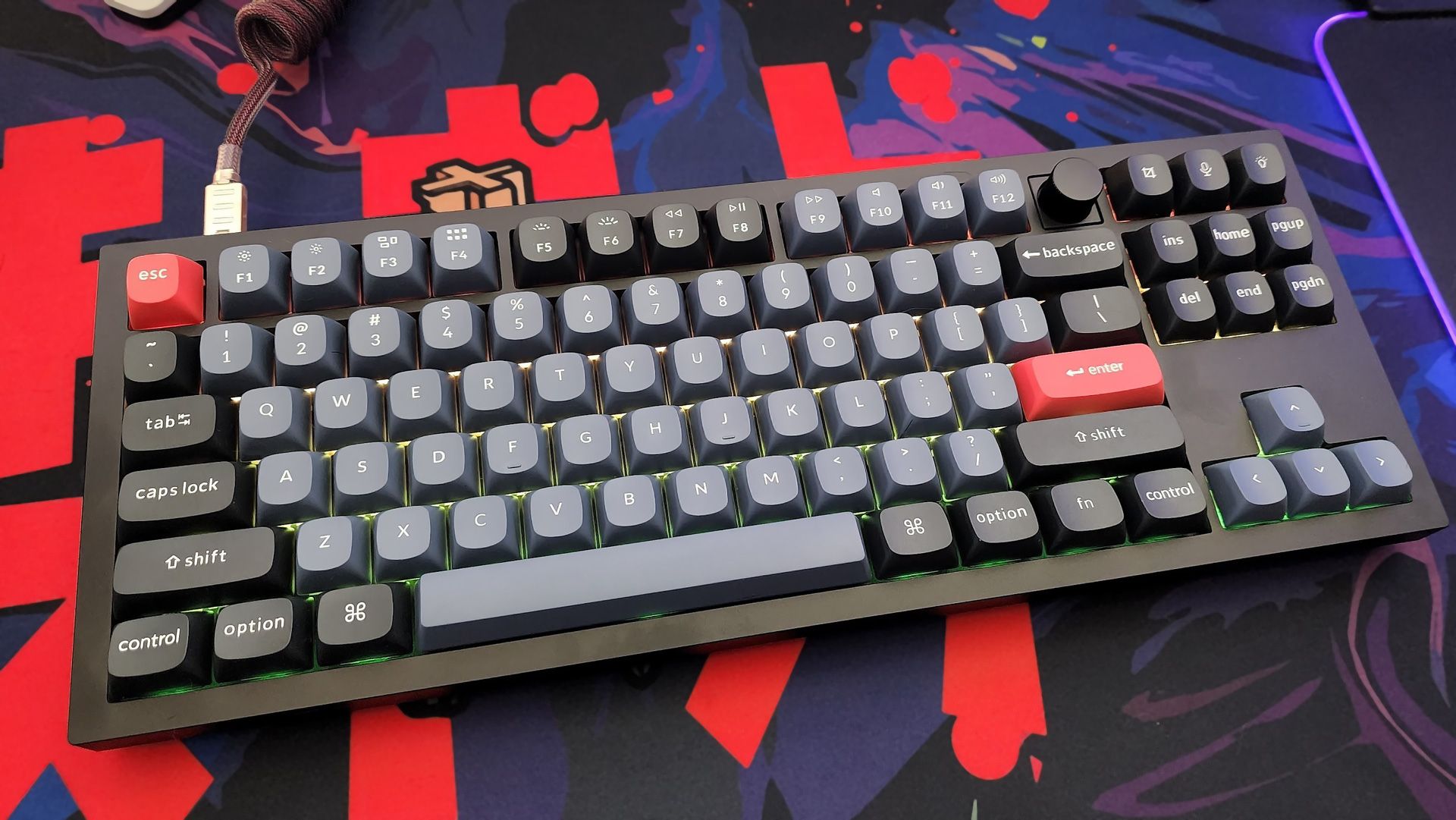 Another win here is the screw-in stabilizers. These are Keychron-branded but are quite good. Out of the box, they were generously lubed and didn’t rattle. I did go back and add some dielectric grease to soften the feel of the key press, but overall the sound and feel was way better than you would expect included stabilizers to feel.

With that in mind, there were a couple of odd steps back here. Remember the silicone force break pads I mentioned? They don’t work well. I’m not sure if they’re too thin or there’s not enough of them, but the two halves of the case touch and it causes the Q3 to sound hollow and pingy out of the box. This may be rectified in the future, but in the meantime, you can fix this by stacking two small squares of masking tape in the four corners of the bottom case. It completely removes the hollow sound and ping as the steel plate is able to do its job. 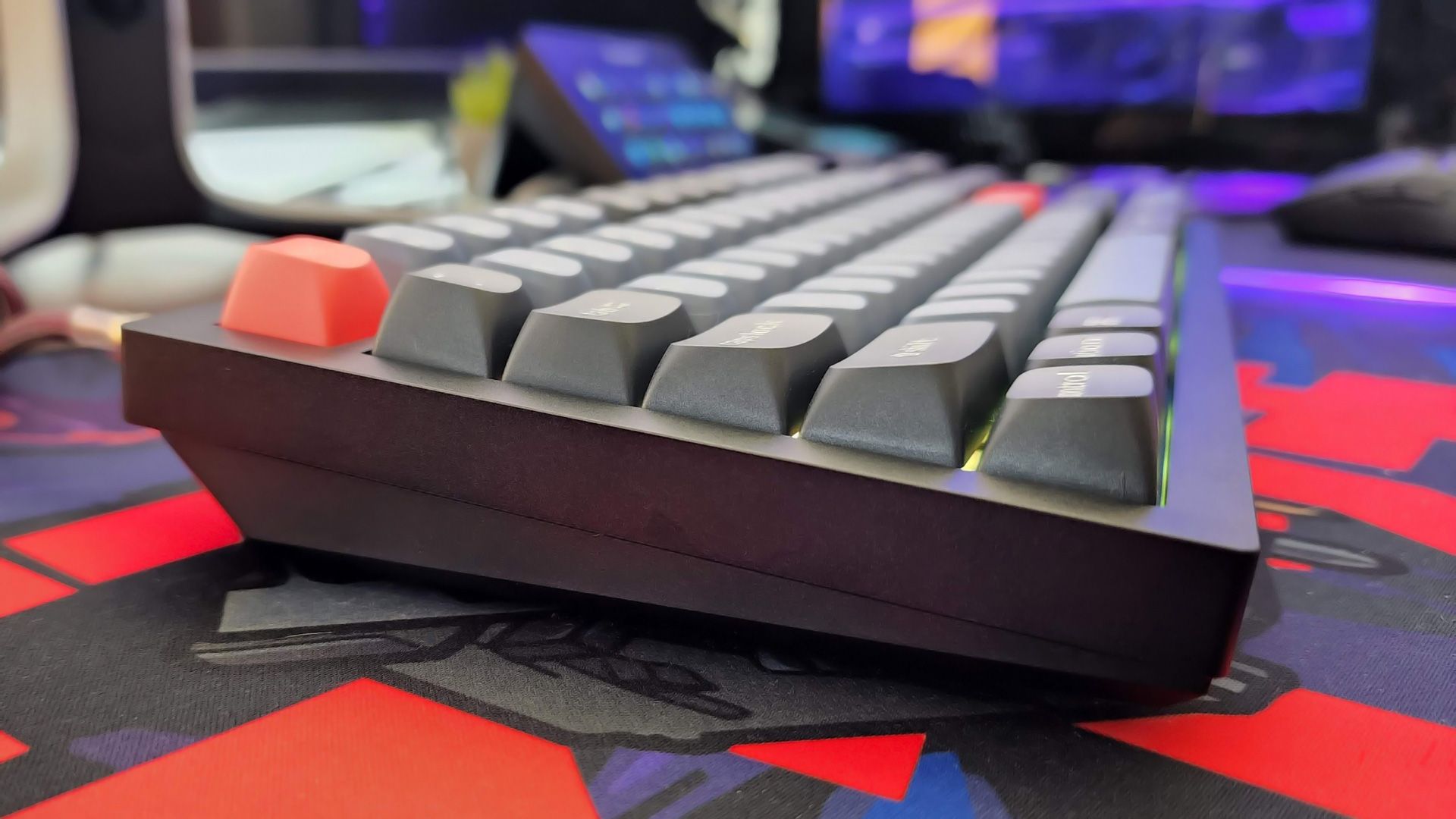 The flex on this board is also less than prior boards, though that’s not exactly the Q3’s fault. The surface area of the keyboard is larger, and without splitting it into two smaller pieces, it takes more pressure to flex the keyboard down on the normal alpha keys. So, as a gasket mount implementation, this really comes down to isolation more than bounce for normal typing. Press it at the top or sides, closer to the gaskets, and you’ll see some major movement, though. 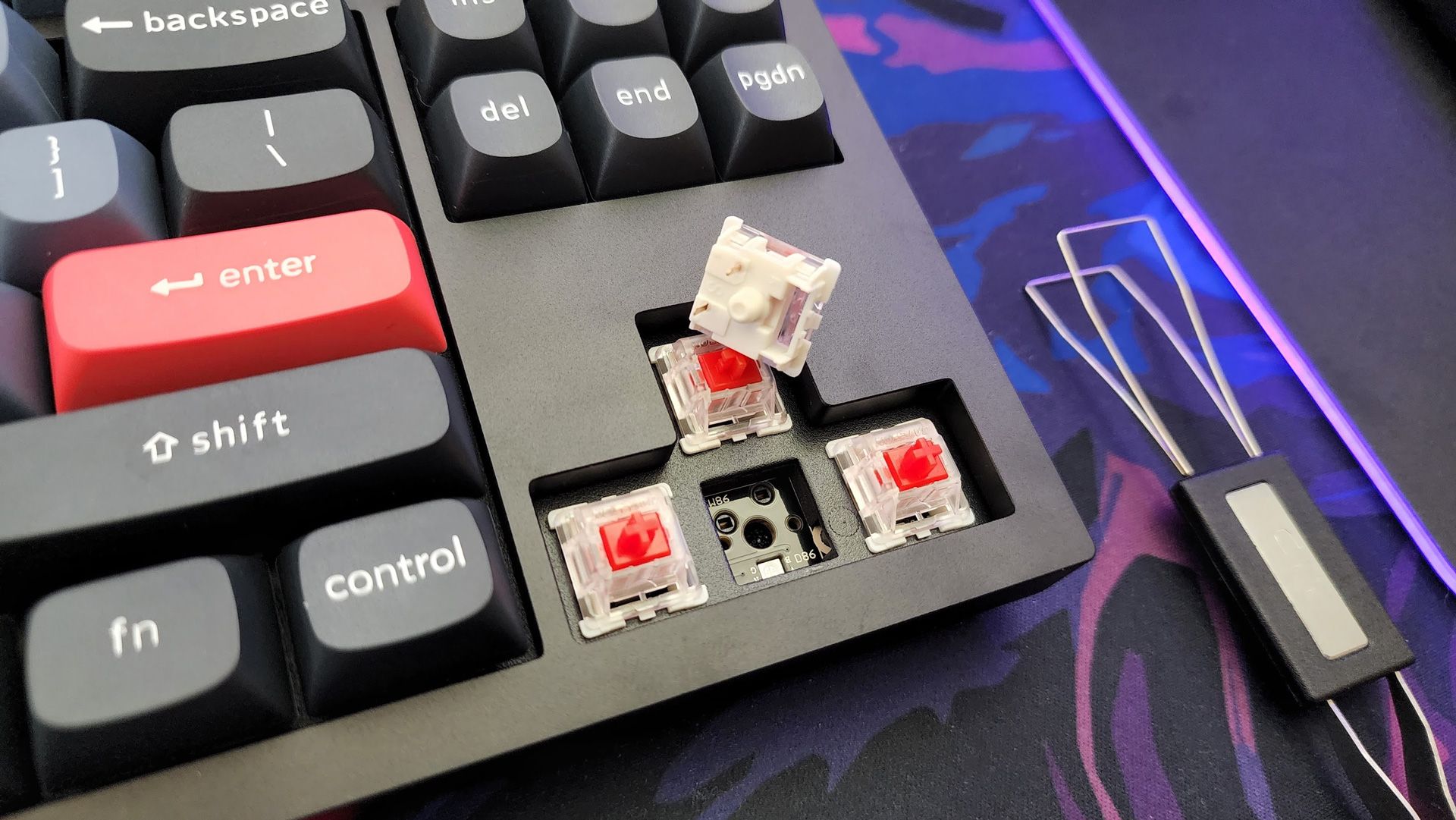 The out-of-the-box sound is very lightweight and somewhat muted. The keycaps and Gateron Pro switches make up most of this effect. Making the sound deeper and a bit louder is as simple as adding a bit of painter’s tape on the back of the PCB. I used two layers of Frog Tape and am very happy with the overall sound. You can also change out the keycaps and lube switches to modify the sound.

Here is my final build, tape modded and force break modded, with lubed Gateron Pro Reds, and GMK Dracula clone keycaps (sent to me by accident by an Aliexpress vendor but that look nice here):

The Keychron Q3 is another winner in this line-up of entry-level enthusiast keyboards. It’s issues with the silicone pads around the case require modding to get the best sound, but like the Q1 and Q2 before it, this is a great platform to build out your own custom keyboard experience and see what this quirky, fun, and addicting hobby has to offer.

The product described in this article was provided by the manufacturer for evaluation purposes. Some articles may contain affiliate links and purchases made through this will result in a small commission for the site. Commissions are not directed to the author or related to compensation in any way.
8.0Great
Pros
Cons
Tags
Mechanical Keyboards
Peripherals
Keychron
Keychron Q3