It was only a few months ago that we reviewed Keychron’s first Alice-style keyboard with the Keychron Q8. The company is back again with a different take on that layout, this time designed around productivity and gaming. While much is the same, this new version comes with a refined layout that adds more programmable buttons to make you more efficient than ever before — whether that’s with spreadsheets or your new rotation in Dragonflight.

The Keychron Q10 the latest entry in the company’s line of affordable custom keyboards. It’s an expanded version of the Keychron Q8 we reviewed earlier this summer and in most respects it’s very similar. If you haven’t read that review, be sure to give it a read because almost everything will apply here too. They’re both great keyboards, but for my money, I’d recommend the Q10 over the the Q8 but only if you don’t mind a bit of extra size. 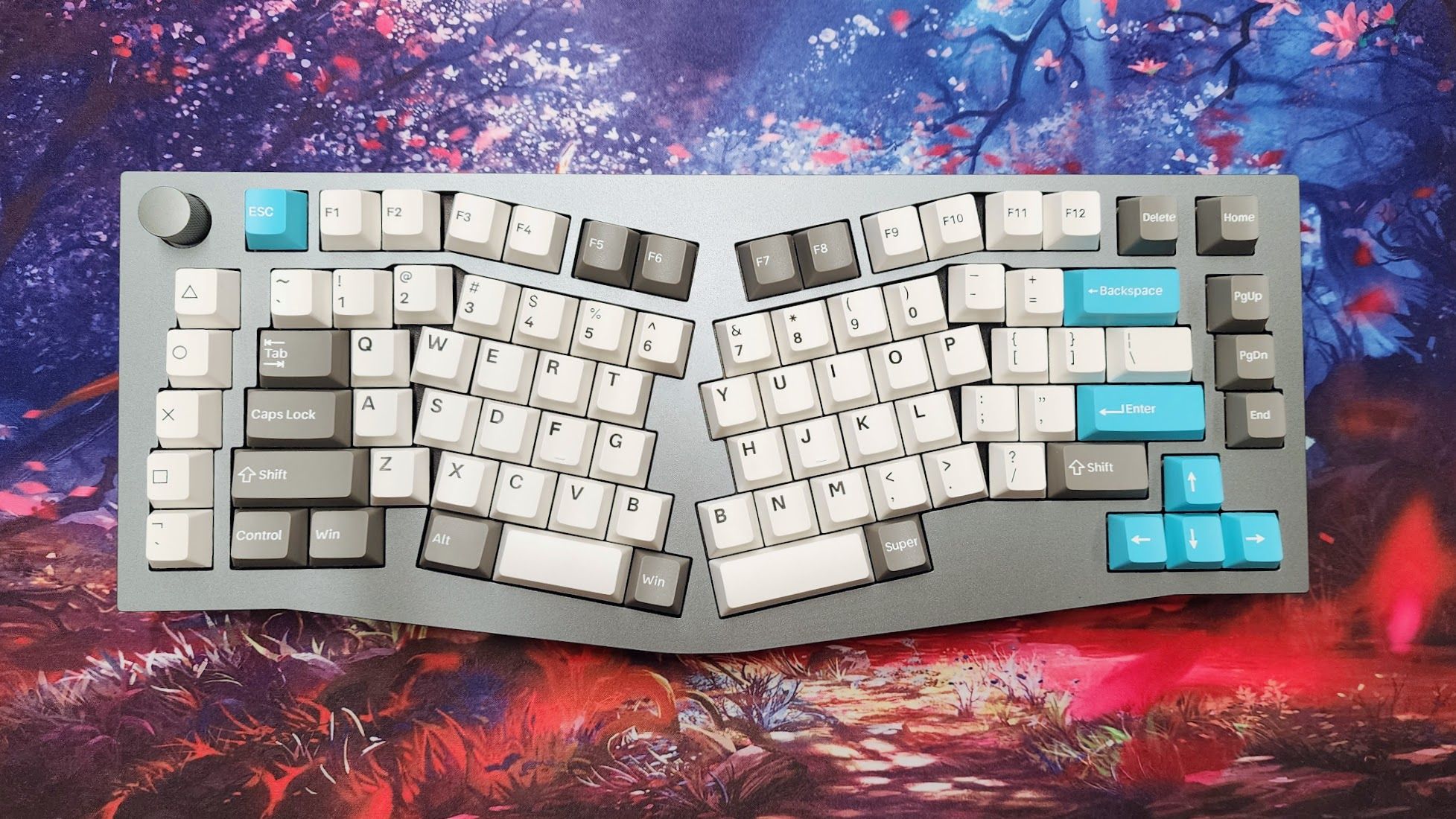 Let’s start with the basics. Like all keyboards in Keychron’s Q-series, the Q10 is a pre-built custom keyboard that is rich in enthusiast-grade features. The most notable of these is its heavy aluminum case. It is immediately impressive if you’ve never held a custom keyboard before and is a good example of an entry-level custom keyboard case done right.

Available in black, blue, and gray, there aren’t many frills on the exterior, but there are no sharp edges, machining marks, or other obvious blemishes to make it seem anything less than premium against other keyboards in its price range. You won’t find any showy weight on the back but instead a simple bottom flanked with eight golden hex screws. 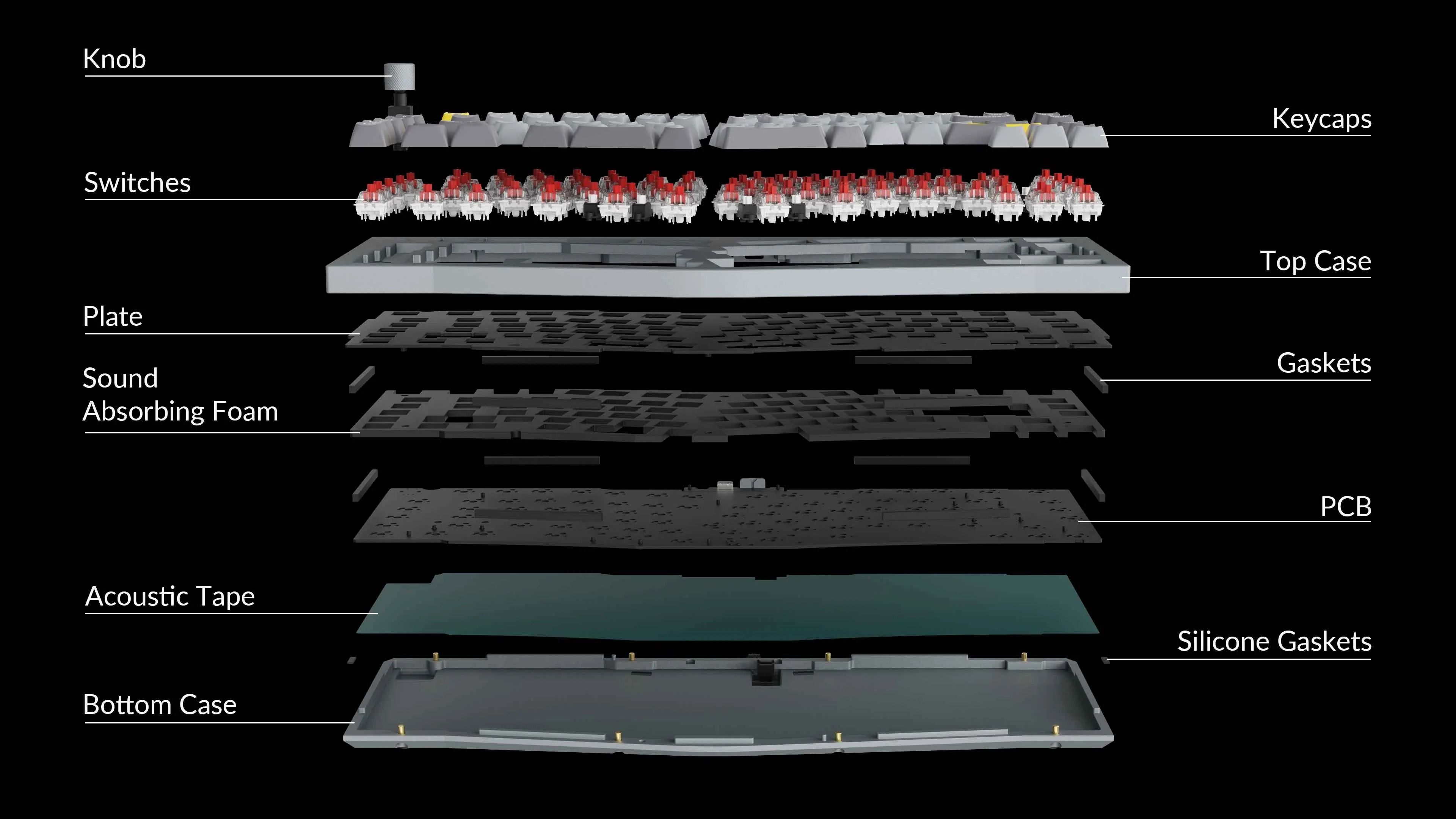 Open the keyboard up and you’ll find that it uses a gasket mounted design and utilizes multiple layers of foam to deliver a soft, flexible typing experience. The gasket mount literally allows the keys to shift subtly under your fingers when typing normally. While most fix their internal components to the case with hard poles and fasteners, the plate holding the switches is sandwiched between soft tabs to isolate typing sounds. The result is a keyboard that offers a typing experience that is gentle on the fingers and is quieter than other mechanical keyboard designs. 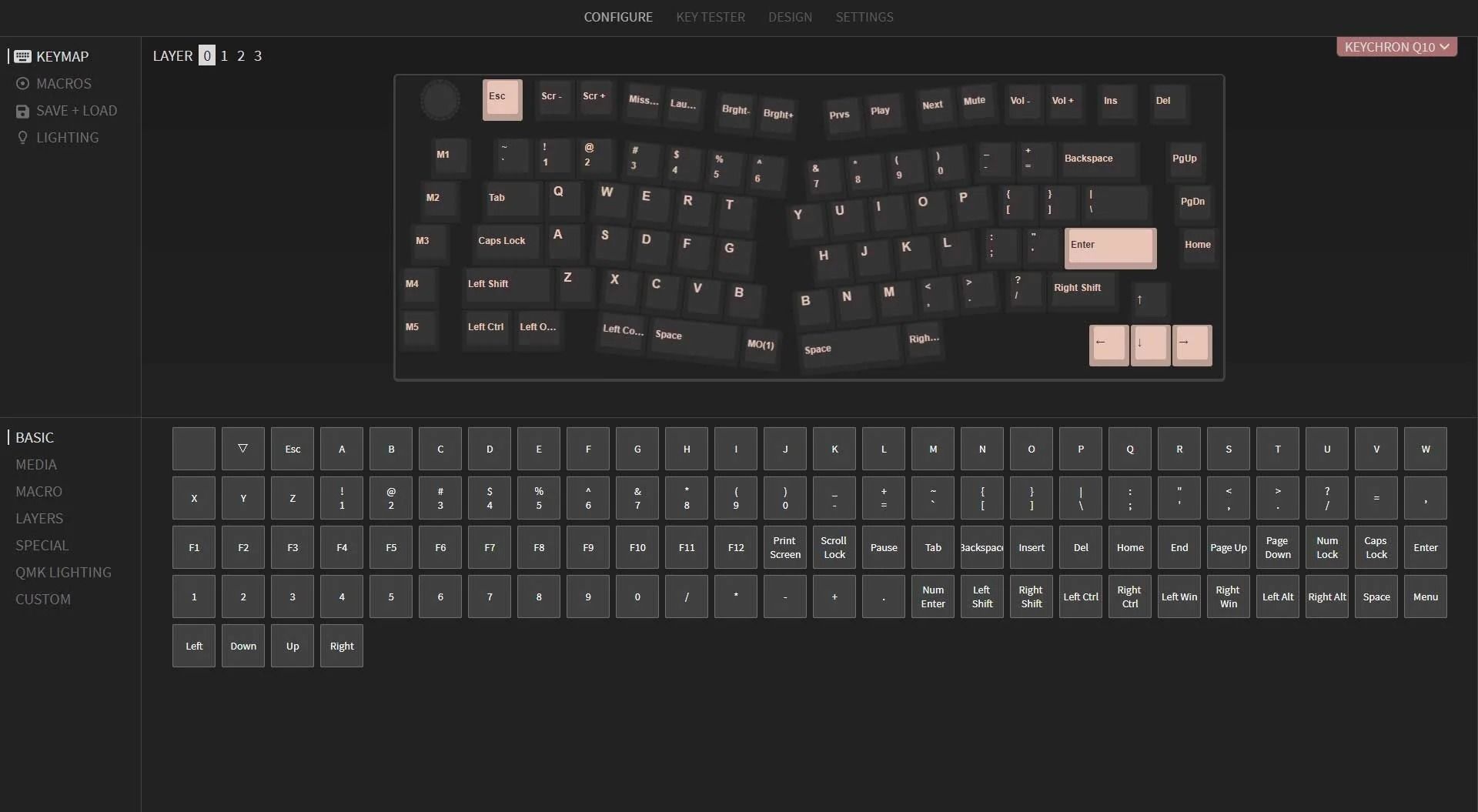 Of course, it also offers all of the staple features of the Q-series line-up: hot-swappable switches, per-key RGB illumination, QMK/VIA firmware programming (no software required after assigning your keymaps), and screw-in stabilizers. Trying new switches and making the keyboard look, feel, and sound exactly as you like is as easy as ever. This is a tinkerer’s keyboard and great for newcomers to the mechanical keyboard hobby.

What makes the Q10 (and Q8) special is its layout. Unlike most other keyboards, it uses an ergonomic layout known as “alice.” This layout separates the left and right sides of the keyboard and then angles the keys. These changes allow you to position your hands in a normal resting position and avoid the strain the can be cause be extensive typing on a traditional layout.

Where the Q10 differs from the Q8 is that it offers additional buttons and repositions the volume knob to the left side of the keyboard. Both keyboards have the 65-percent layout for their standard keysets, meaning that the function row is relegated to Fn combinations with normal numbers, and both have a selection of navigation and editing buttons on the righthand side.

The Q10 just expands that. There are four buttons on the right for navigation and editing, instead of two to three, depending on if you had the knob version of the Q8. The Q10 adds five more programmable macro buttons to the left side of the keyboard, perfect for assigning macros. That additional space also makes room for the volume knob to come standard.

The keyboard is also available in fully assembled or barebones versions if you already have switches and keycaps. I would highly recommend anyone purchasing this keyboard to opt for the fully assembled version. It comes with your choice of Gateron Pro switches, which are pre-lubed and much better than traditional Cherry keyswitches, as well as doubleshot PBT keycaps. For only $20 more, it’s a steal for the switches alone.

The Keychron Q10 is a very solid keyboard, straight out of the box. With the pre-assembled version, I was impressed by how smooth the Gateron Pro linear reds were. There was no spring ping or reverberation through the case. It’s a smooth, clacky typing experience even without doing any mods for yourself.

The stock keycaps are also pretty good! Since they’re doubleshot PBT, they’ll never shine or fade. The legends are made of a separate piece of bonded plastic, so you also don’t need to worry about them chipping over time. I chose the gray version for this keyboard and like the gray and yellow color scheme Keychron went with. Each color has its unique colorway, and Keychron also sells separate sets if you’d like to find something cost effective but high-quality.

That’s exactly what I did. The stock keycaps are fine, but I’m a fan of Cherry profile. Instead, I used Keychron’s Dolch Blue set and think it looks great. For $40, it’s a large set and the quality is outstanding. 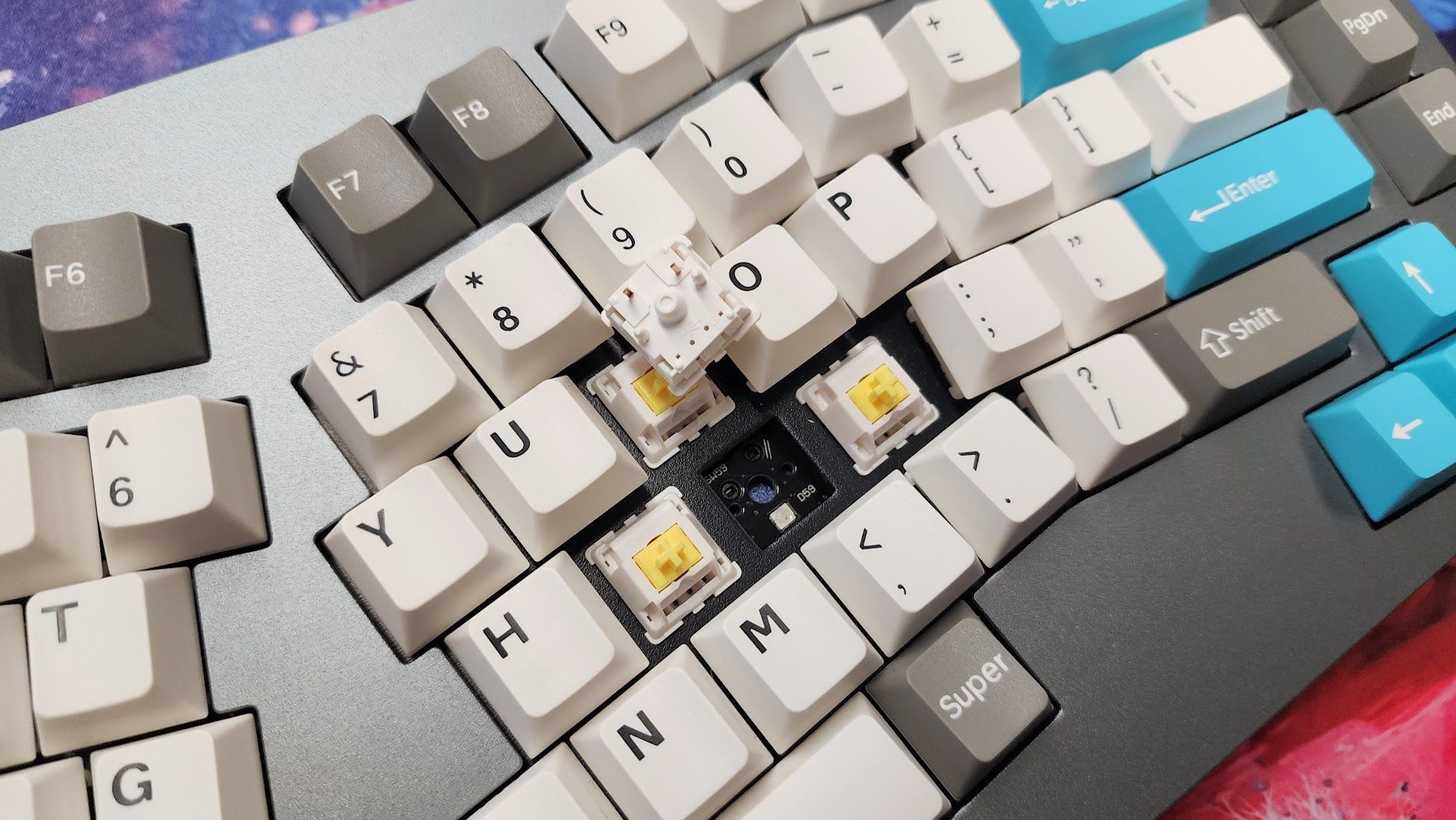 Typing on the Alice layout takes some getting used to, but it’s much easier to learn than many other ergo keyboards that used fixed columns for the keys. Here, the spacing is slightly different but if you’re a touch typist on a normal keyboard, this won’t be a big jump.

The additional keys come in handy for work and gaming too. The left-hand macro keys can be anything you’d like them to be, from custom macros, to media controls, to nav-buttons that may not be on the left side. The sky is the limit. And thanks to VIA, assigning those remaps is instant, easily accomplished, and will work on any computer even without software running in the background.

I found myself using them most for data entry and editing spreadsheets, but with Dragonflight coming up quickly, they make for an easy way to keep macros and abilities right by your left hand.

The typing feel is almost identical to the Q8 and that’s a good thing. There’s a noticeable softness to the typing experience. If you press down, you can see the whole key set move under your fingers. The sound is on the higher pitched, clackier side, and I would have loved to hear a bit more depth. But, with a good tape mod, you can bring a bit of that out while also adding pop to the sound signature.

Overall, this is a very solid follow-up to the Q8 and another great entry for Keychron’s Q-series. 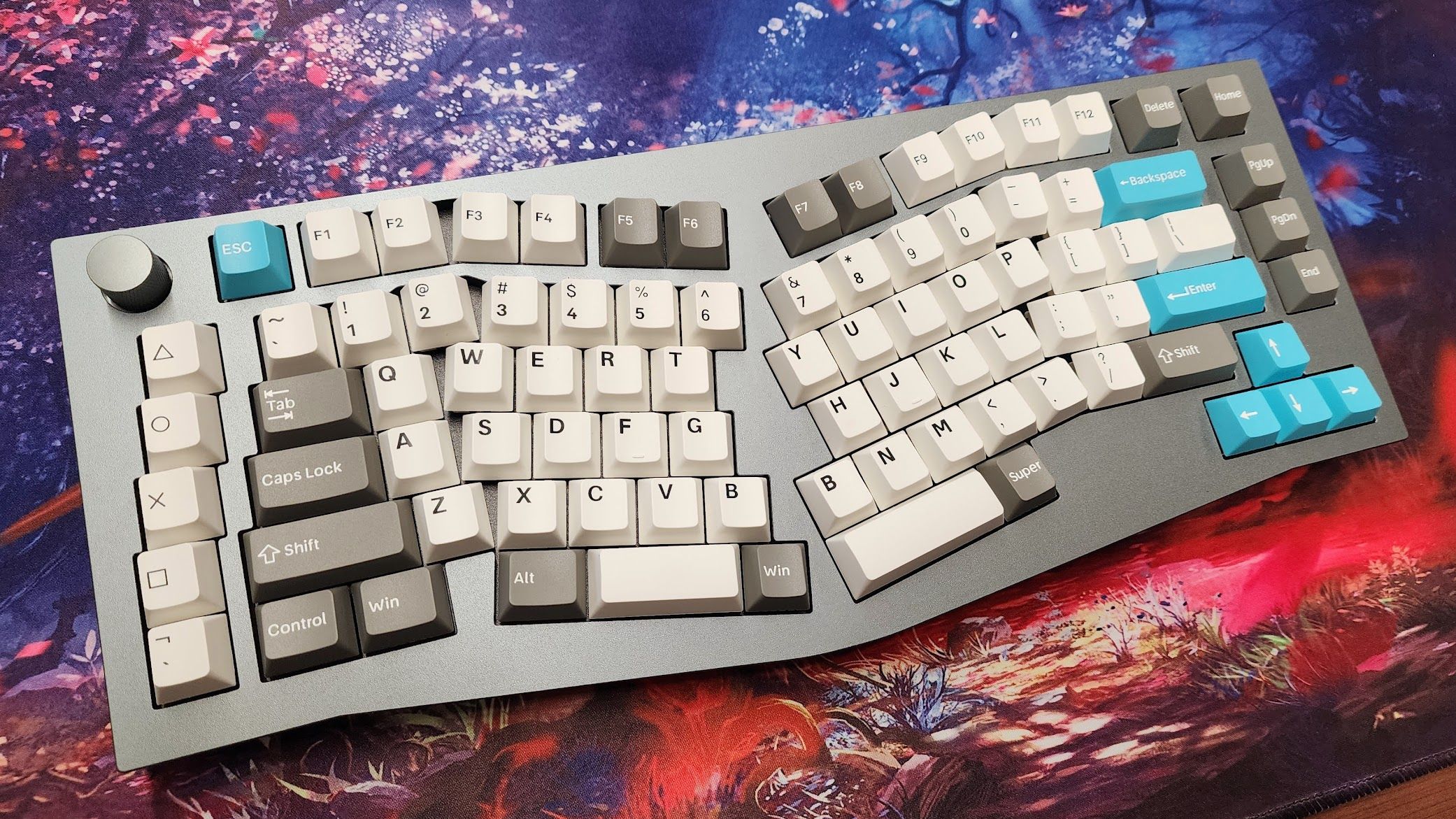 Final Thoughts - Should You Buy the Keychron Q10?

If you’ve been looking for an ergonomic keyboard, the Keychron Q10 a solid option. In fact, for an all-aluminum Alice, it’s one of the best deals you can find today. What’s interesting here is that it really doesn’t leave much reason to buy the original Q8, unless you really crave the extra couple inches of desk space. But while the footprint is larger, the additional six buttons make a big difference in its functionality and make this a major contender for an Alice on a budget.