Jabra’s Elite series has been one of the most popular options in the true wireless market since its inception. It was only last December that I reviewed the Elite 75t and April that I took a look at its latest revision, the Elite Active 75t. I was surprised to see the Elite 85t come so soon, but come it has and I’ve spent the last several weeks using it as my daily driver. How does it stack up against the Elite 75t and wider true wireless market? That’s exactly what we’re going to find out in this review. 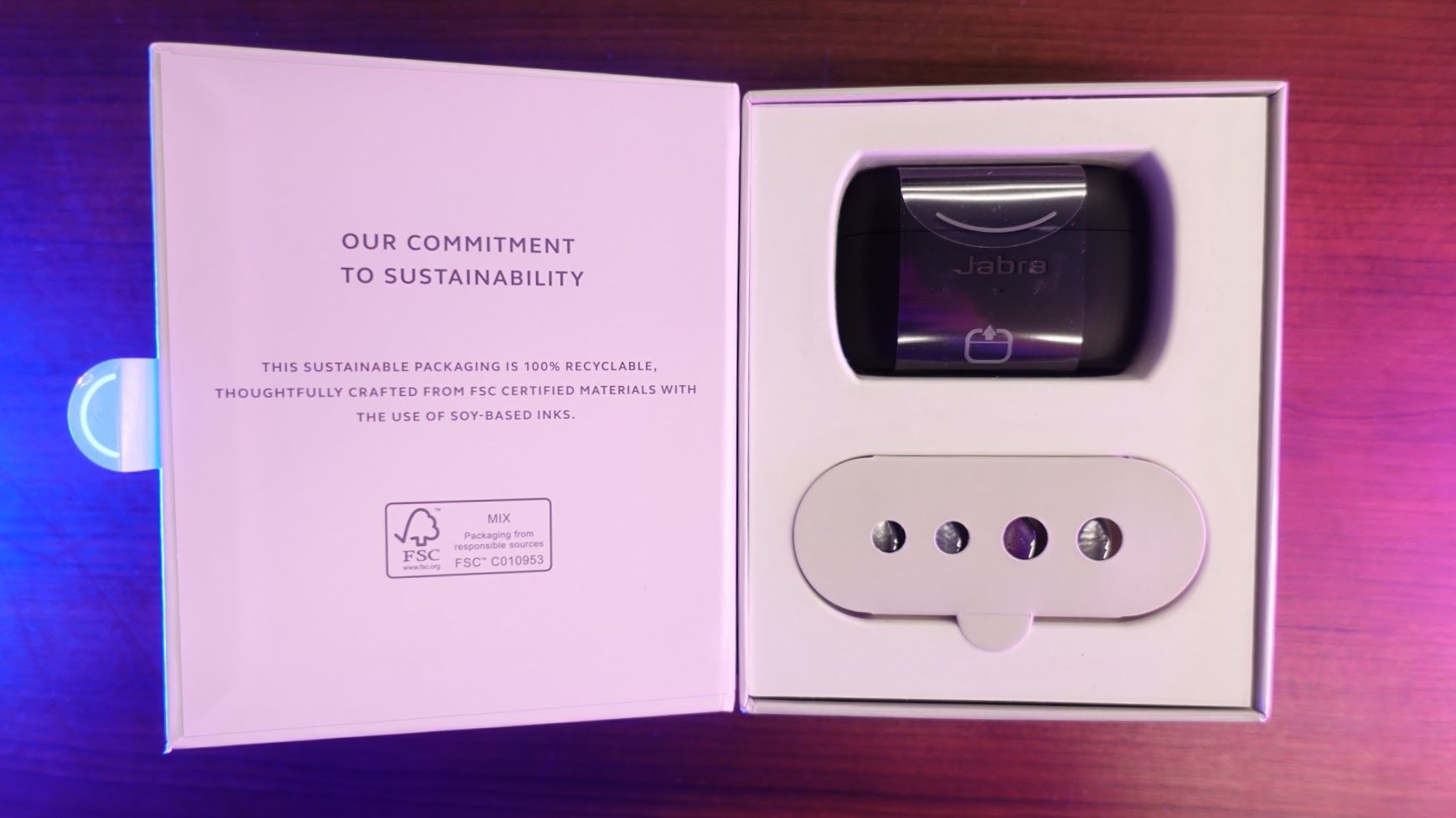 Jabra has earned its place among the flagship brands in the true wireless market. Its earphones are some of the most highly recommended you can find in this space and the reasons have been as simple as they are meaningful: they sound great, fit comfortably, have good battery life, and are well supported with features and updates. The Elite 75t have made their way into my ears nearly every day since my review in December and the Elite 65ts every day before that going back to June of 2019.

I share that because maybe more than any other review I’ve done, I have extensive familiarity with Jabra’s true wireless line-up. It’s not often that I get the chance to review something after more than a year of use, and though this is a review of the Elite 75t and not the past models, that experience has certainly shaped my impressions of the Elite 85t.

Even though it’s only been seven months since the launch of the Elite Active 75t, the 85ts really do feel like a reinvention of the Elite line. They have a new fit, a new sound, and now come with active noise canceling out of the box, putting them in line with other flagship true wireless earphones from main competitors Sennheiser, Sony, and Bose. The upgrades also come with a new $229 price point, $30 more than the Elite 75t which remains an excellent purchase in its own right. 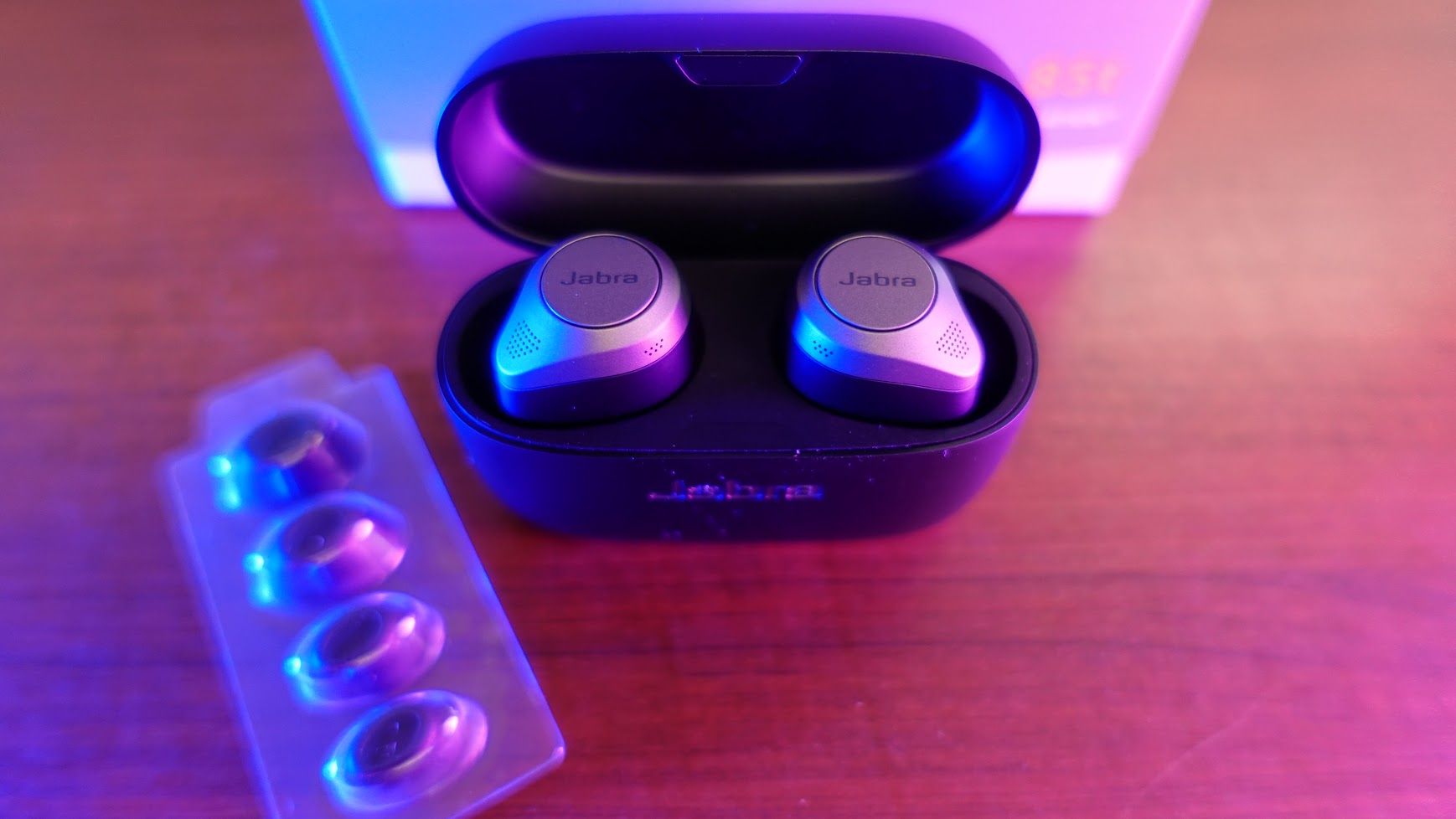 Compared to the Elite 75ts, the earbuds are slightly larger but still fit comfortably and don’t poke awkwardly from your ears. This is likely to accommodate the new chipset which supports active noise canceling right out of the box (the Elite 75ts received this through a software update last month). If you liked the rounded shape of the 65t or 75t, you’ll probably find these nestle in your ear just as well as the 75ts.

I didn’t find that they fit quite as snugly, however. The earbuds now seem designed to rest in the ear rather than snug directly into the ear canal like their predecessor. The nozzles on the Elite 85t are much shallower and oval-shaped, rather than circular. In my right ear, this wasn’t a problem and the earbud felt secure and properly fit. My left ear was another story. I’m used to using a slightly smaller tip in this ear, but I just couldn’t find a tip that offered the level of snugness that the 65ts or 75ts did. For the first time, I’m having to readjust throughout the day as that bud inevitably loosens. This hasn’t been the case with my right ear, which does in fact feel fairly snug, so this is probably a quirk with my anatomy. Still, they don’t feel quite as locked in as the 75ts. I consider those buds some of the most secure and comfortable on the market, so though these are still good, they feel like a step back. 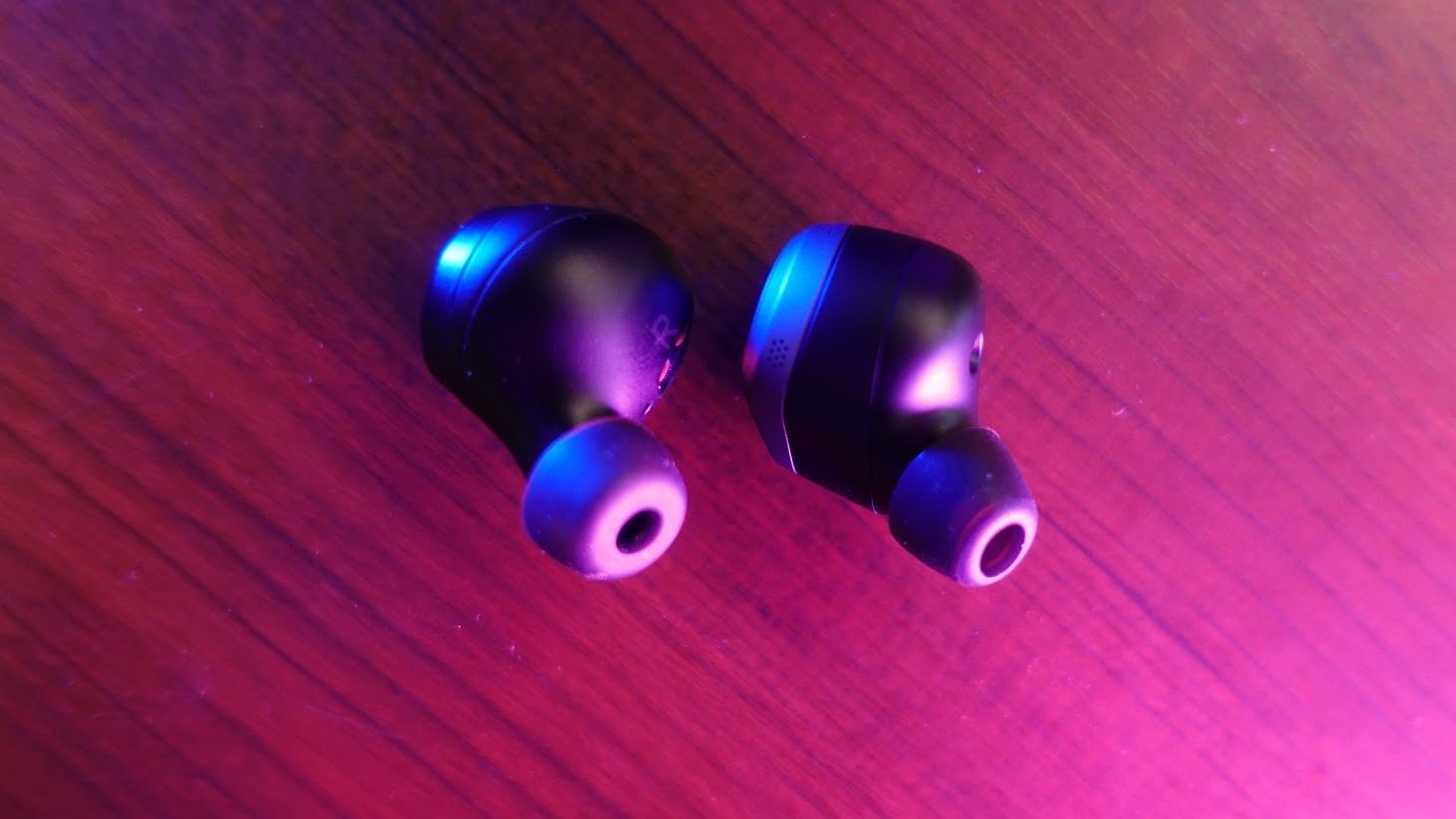 Another big change comes in the new tuning Jabra has applied. Every generation of Elite earbuds has brought improvements to the bass and that is definitely the case here. The 85ts are very bass-heavy out of the box. This is great for genres like hip hop, and inspired me to listen through Eminem’s new album. Likewise, for action-heavy games, it’s great. For general listening, though, it was too much and overwhelmed the rest of the spectrum.

Thankfully, changing the sound of the earbuds was easy thanks to the built-in five-band equalizer. These earbuds very resilient to different EQs, so you can dial in exactly the sound you’re looking for. I was surprised by how much detail I was able to hear just by tweaking the bass and increasing the treble. These settings can be saved as “moments” and recalled at any time, so you can easily have a setting for gaming and another for music, or even break that down by genre.

The software also has a number of other cool features. You can choose your Sound Mode, choose from preset equalizers, customize button controls for calls and media, and even check a virtual map with location data to help you locate a lost earbud. If you find it before it goes to sleep, you can even make the bud play a high-pitched tone to help you find it (which saved me once when my right bud hid between the couch cushions).

The biggest selling point of these buds is the active noise cancelling and it lives up to Jabra’s reputation. The ANC is great — but if you’re already using a pair of Elite 75ts, don’t run out and upgrade just yet. The 75ts received an OTA update adding active noise cancelling back in October, and though the 85ts work out of the box, the actually level of ANC sounds very similar to my ear. In fact, the Elite 65ts may be a bit better due to the improved seal in the ear canal. It’s also very odd that the 85ts don’t provide any option to customize the ANC beyond basic cancellation levels while the 75ts allow you to adjust the frequency and balance per ear for a more customized experience. 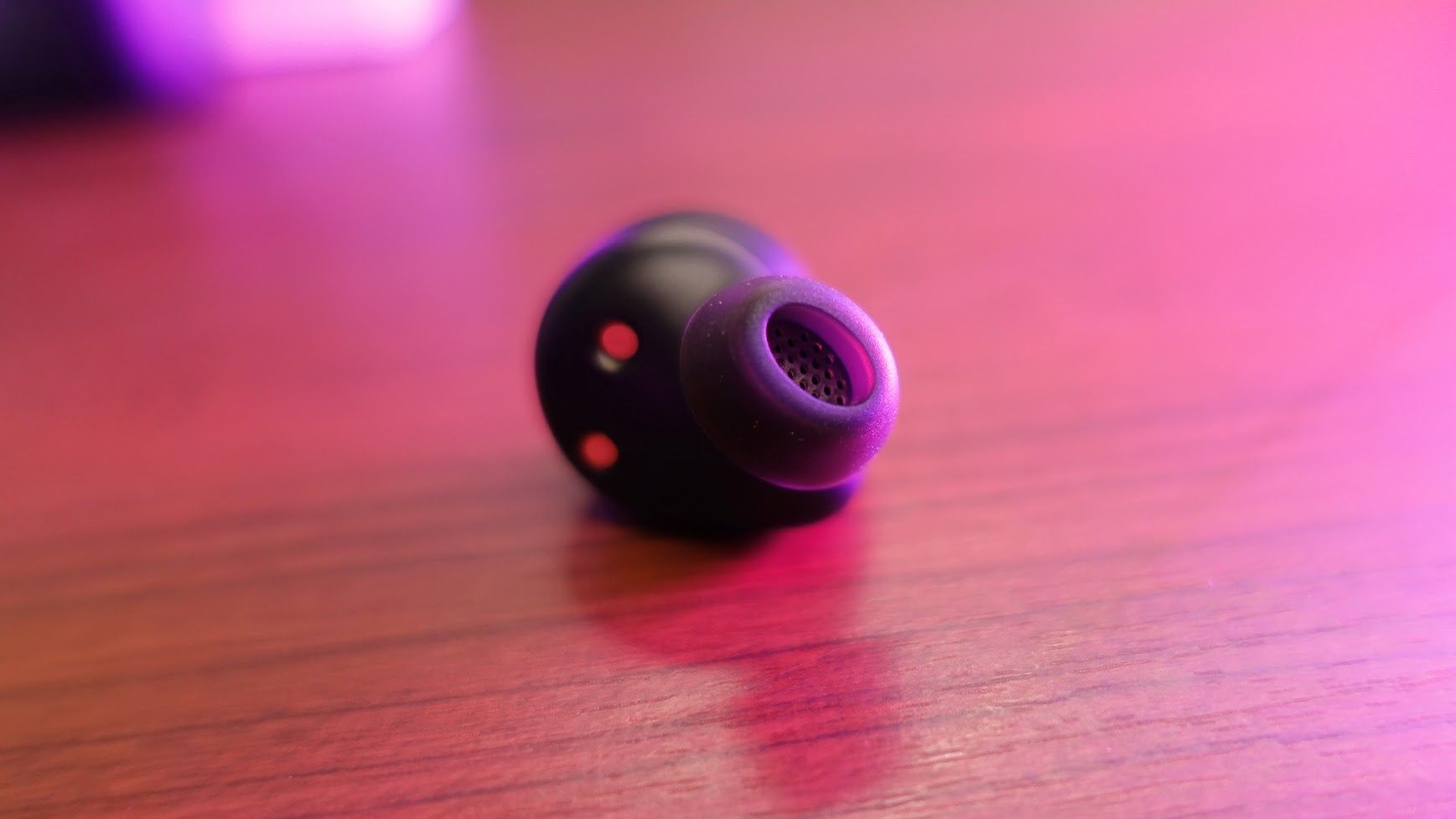 The end result is very similar, however, and that’s an excellent ANC experience. The earbuds use both an internal and external microphone on each ear to monitor and cancel noise inside and outside the ear. Active Noise Cancelling works best with frequencies below 1kHz, which means much of the ambient white noise (engines, vents, computer fans) disappears almost entirely while still allowing you to hear higher frequencies like voices. As a teacher and father of four, there have been times I’ve popped them in simply to enjoy the silence they offer. I also use them when writing or gaming or just when I need to focus. I only wish these earbuds kept the former fit for an even better effect.

Using ANC does have an impact on battery life, but the Elite 85ts still manage to be competitive. With ANC on, you’ll find that they run for about five hours at 75% volume and can be recharged 4-5 times using the charging case before that too will need to be recharged. Without ANC, that battery life is extended to 7 and 31 hours respectively. The earbuds also support fast charging, so when they run low you can pop them back in the case for an hour of runtime per 15 minutes in the case.

This, my friends, is one of my favorite features of these buds. Between the auto-turn off and fast recharge, I can keep one bud in my ear virtually all day. When I get the low battery indicator, I pop it in the case, take a little break, and then I’m good for the rest of the day. Where other buds have run dry and take hours to recharge, my Jabras are always there, ready to go.

The other feature I can’t live without is HearThrough. By pressing the left earbud, you can activate the microphones to allow you to hear what’s going on around you. When you’re in the middle of a game, you might not hear the knock on the door. When that person comes into the room, a quick tap of the earbud lets you have that quick conversation and then get back to gaming without ever having to take them from your ear.

Taken as a whole package, the Elite 85ts are certainly iterative. They  make a good effort at evolving what a Jabra Elite TWS is in 2020. Some of the changes are better than others. The ANC and battery life are great. The return of core features, like HearThrough and the built-in equalizer are as good as ever. Others I’m not such a big fan of. The new shallow fit just isn’t as secure or isolating as the 75ts were. Not bad, per se, but definitely a case of “if it’s not broke, don’t fix it.”

But even with those critiques, this is still my go-to headphone. They sound great, fit comfortably, and to over simplify, they just work. They perform exactly as I would want a true wireless headphone to. When I need hearthrough or ANC, it’s available at the touch of a button. When I need to take a call, it has multiple microphones ready to cancel outside noise and let me come through crystal clear. The battery life lasts just long enough and then quick charge gets me the rest of the way to full days of use. They’re small enough to fit in my ear and the case comfortably in my pocket. And yes, Find My Jabra has already saved my put when I accidentally left a bud on my desk at work. 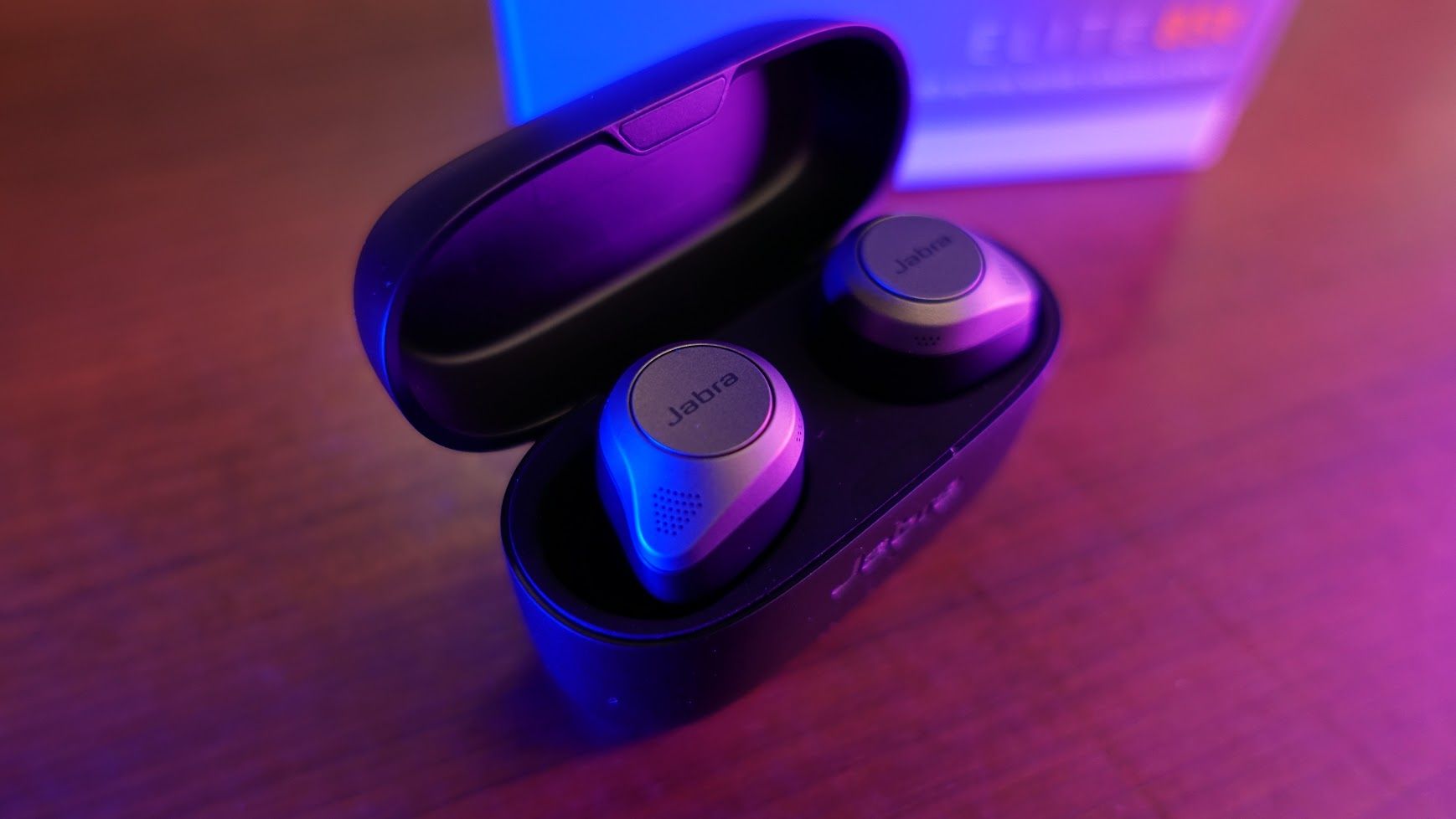 Simply put: these earbuds, like the 75ts, offer a combination of features that other manufacturers just seem to miss in some way. Whether it’s requiring multiple buttons presses where there should be one, odd fitment, no volume controls, or any other myriad issues, the Jabras just avoid those pitfalls. They make themselves easy to use and come back to time after time after time. They’re expensive, yes, but absolutely worth it.

The question here, then, is whether you should choose the Elite 75ts or Elite 85ts and that’s where things become more complicated. The two sets are very similar in sound (with EQ), ANC, and features. In that way, it really comes down to fit. If you prefer something that snugs into your ear canal, the Elite 75ts are a great choice. If you prefer something that stays out, go with the 85ts. Either will give you a great listening experience.

The product described in this review was provided by the manufacturer for evaluation purposes.
8.0Great
Pros
Cons
Tags
Lifestyle Tech
True Wireless
Jabra