It’s been almost two years since Intel released the i9-9900K and since that time the CPU landscape has dramatically changed. With Ryzen, AMD has turned up the heat, raising core counts, lowering prices, and challenging Intel for the top spot in the marketplace. Today, Intel delivers their return blow with its10th generation series of processors, previously known as Comet Lake.

We’ve spent the last two weeks putting both the Core i9-10900K ($488) and i5-10600K ($262) through their paces. Representing Intel’s leading entries in the enthusiast and mainstream gaming markets, do they have what it takes to stand out and earn a place in your next build?

Let’s address the elephant in the room: Intel’s 10th generation is built on the 14nm process, the same as Skylake in 2015. Since then, Intel’s CPUs have largely been seen as iterations on that design, especially in the face of AMD’s push to smaller and smaller fabrication processes. Things aren’t as simple as they would first seem, however, as a smaller node doesn’t equate 1:1 with higher performance. AMD’s 7nm parts will absolutely not be “twice as powerful” as Intel’s 14nm, for example, and as we will soon see. Rather, the die shrink has much more to do with power efficiency and temperature — two key elements of performance, but dependent on the design and engineering of the chip. 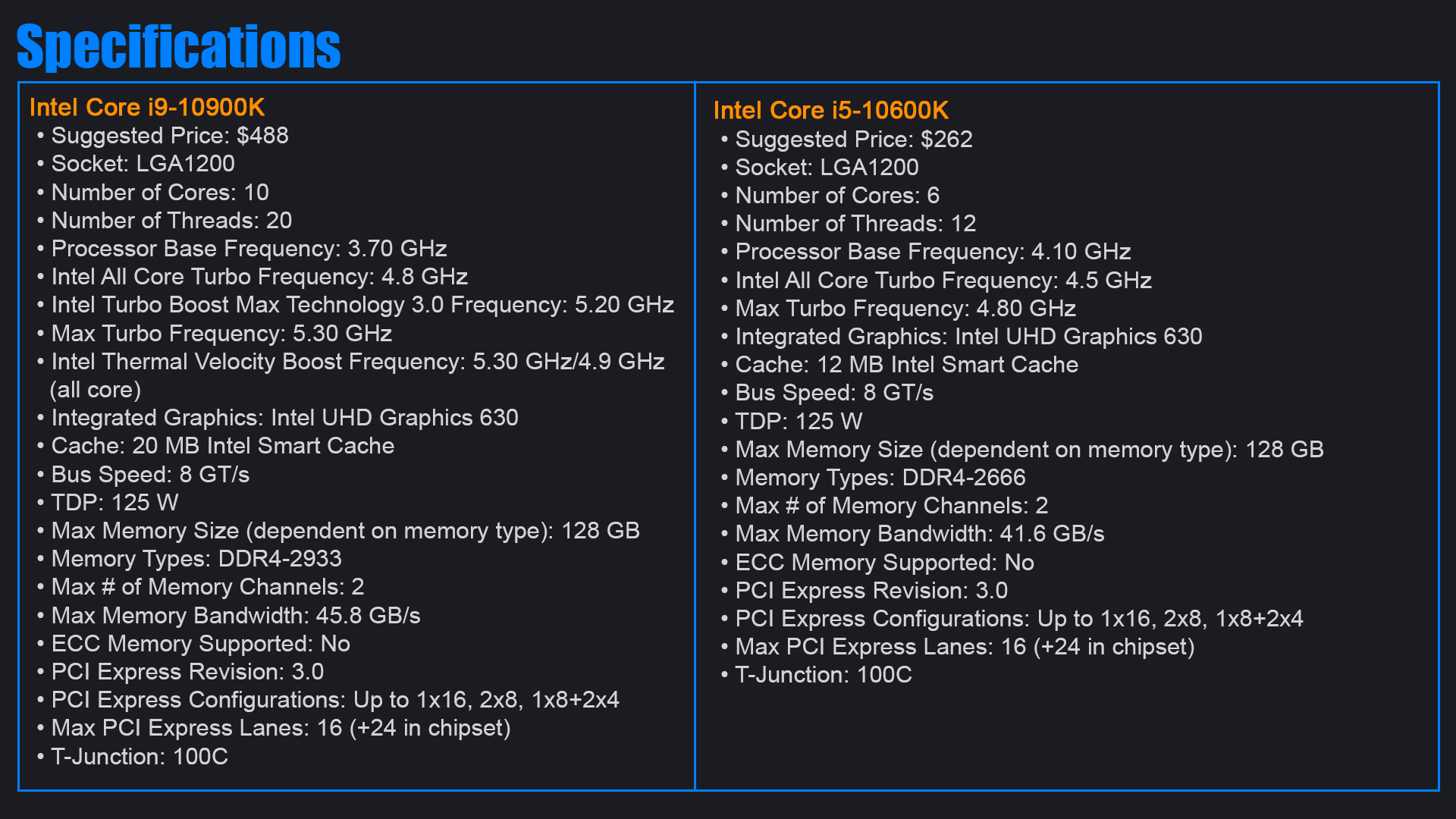 Rather than lean heavily on core count (which they’re also doing), Intel is instead emphasizing the value of clock speed, which is of greater benefit to gamers. High thread count CPUs are impressive, especially if you’re a content creator or use your PC for professional work, but if all you’re doing is playing games, frequency has a much more direct impact on gaming performance.  As a result, we see an impressive 5.3 GHz maximum boost speed on Intel’s flagship Core i9-10900K. 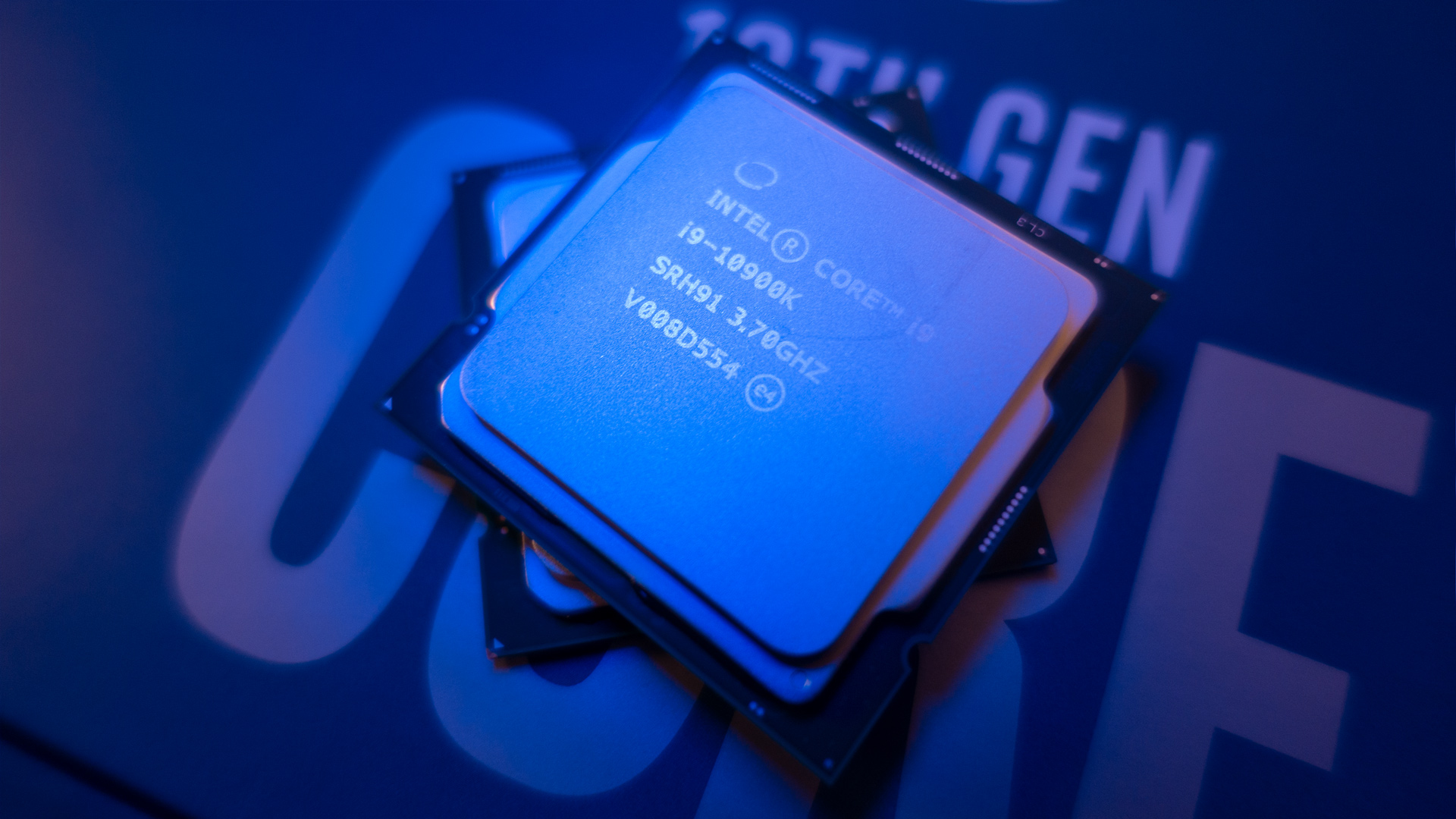 Starting with the top of their product stack, the Core i9-10900K is out to impress with 10 cores and 20 threads. It features a base clock speed of 3.7GHz and, should temperature conditions allow, a maximum thermal velocity boost of 5.3GHz. Core i9 CPUs also feature Intel Turbo Boost Max 3.0 technology, which is capable of identifying two “favored cores” for an efficient boost up to 5.2GHz. If you’re more interested in the full capability of all the cores, the Intel All Core Turbo Frequency is an impressive 4.8 GHz. The 10900K, 10700K, and 10600K are each unlocked for overclocking, too, if you’d like to drive that higher.

The amount of different boosts is confusing. The thing to know is that achieving 5.3GHz is going to depend highly on your cooling solution and how lucky you are with the temperature of your chip. Intel has made strides with improving thermal performance, but, as expected, the 10900K is a high power, high temperature CPU. 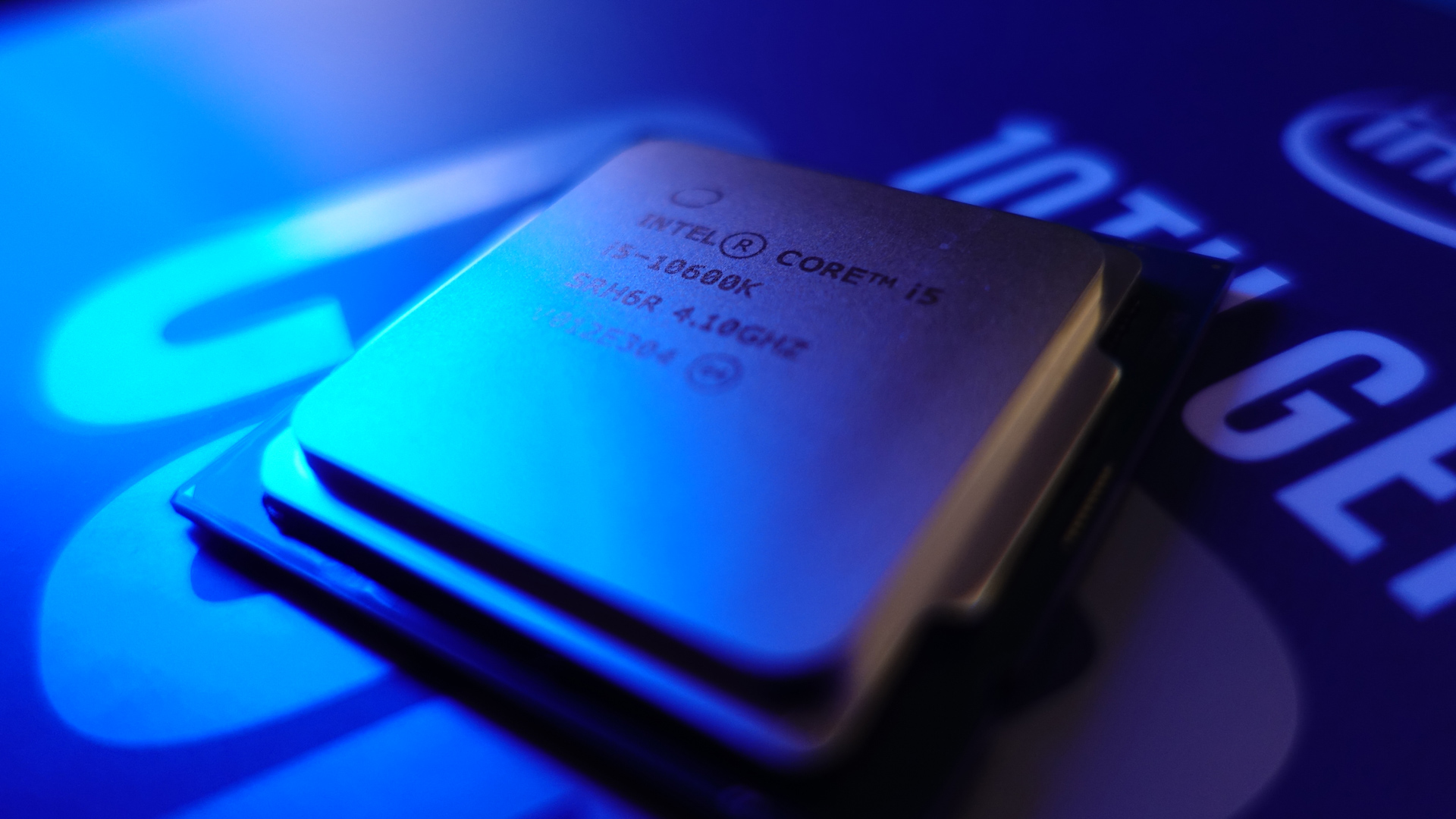 The Core i5-10600K is targeted at mainstream gamers rather than the upper-level enthusiasts the 10900K has in its sights. Coming in at a suggested price of $262, it features 6-cores and 12-threads, with a base clock speed of 4.1GHz. It leaves a few of the fancier features behind, Turbo Boost Max 3.0 and the Thermal Velocity Boost, and instead sports a maximum Turbo Boost 2.0 speed of 4.8GHz on a single core. All Core Boost clocks in at 4.5GHz. It also features 12MB of Intel Smart Cache.

Taken as a whole, the i5-10600K is remarkably similar to last generation’s i7-9700K, but costing far less. The key difference is that the 9700K features eight physical cores, whereas here we’re limited to six, but the addition of hyperthreading goes a long way to make up for that. 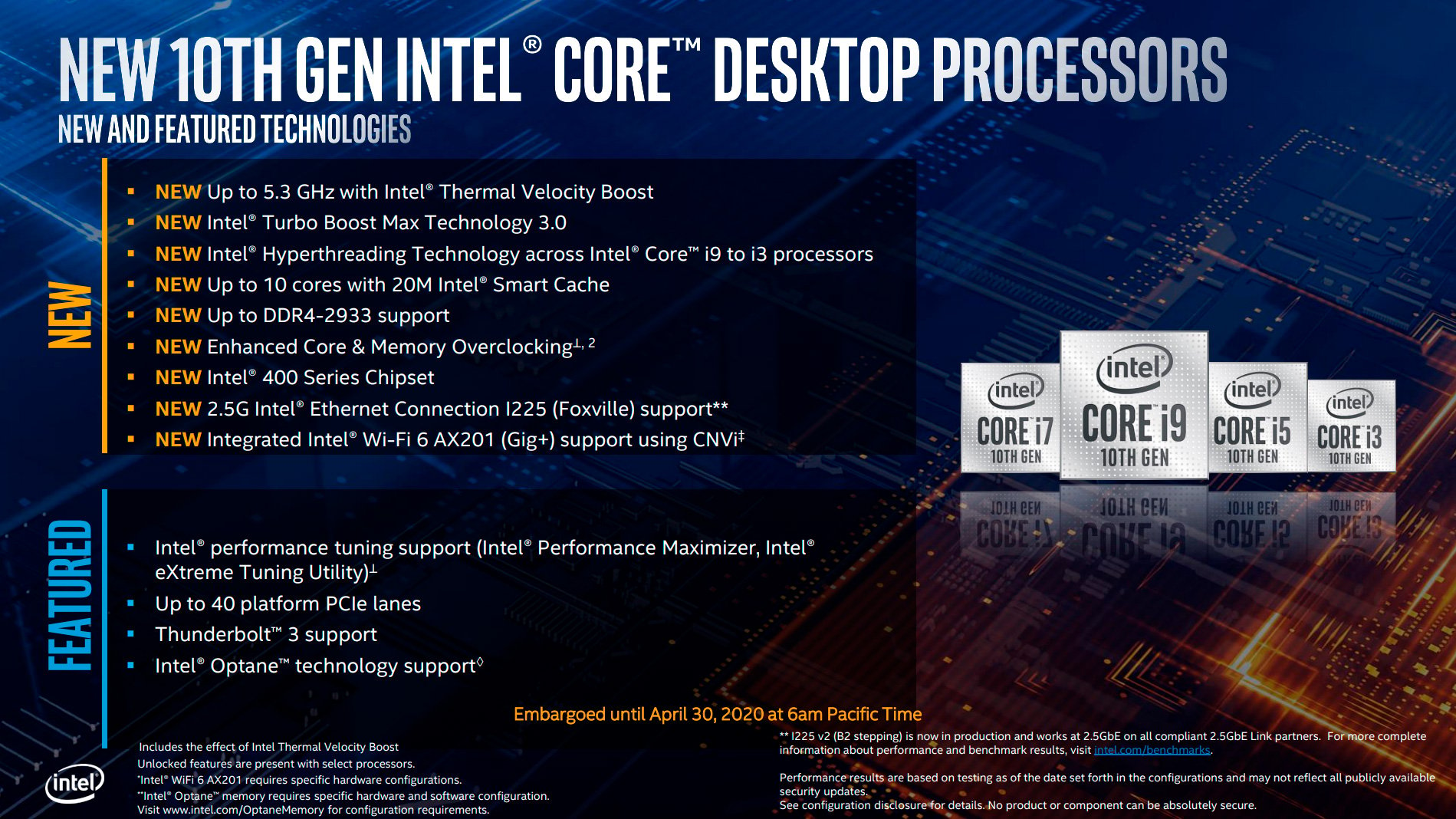 Each of these CPUs runs on the Z490 chipset and new LGA1200 socket, which means you’ll need to buy a new motherboard to use them. They each feature 16 PCI Express lanes, with an additional 24 supplied by the chipset, for a total of 40 lanes. This is sufficient to run single or multi-GPU configurations, plus multiple PCIe NVMe drives. That said, this generation remains limited to PCIe 3.0, which is a noteworthy limitation if you’re interested in the fastest orders of PCIe storage. It’s also interesting to note that many motherboard manufacturers seem to have built PCIe 4.0 support into a selection of their Z490 motherboards, which makes it likely that Intel’s 11th generation, which will also be running on the new LGA1200 socket, will feature PCIe 4.0 support.

Whether or not this is a meaningful limitation for you depends entirely on how cutting edge you prefer to be. PCIe 4.0 SSDs are expensive and, for the vast majority of consumers, aren’t utilized to their fullest potential. But, as technology and software development marches on, PCIe 4.0 will become the norm and to take advantage of it, you’ll need to upgrade a second time beyond Intel’s 10th generation. If that’s several years down the line, that may not be a big deal, but with rumors of Gen 11 coming within a year, it’s certainly something worth considering. As always, we recommend taking rumors with a grain of salt. 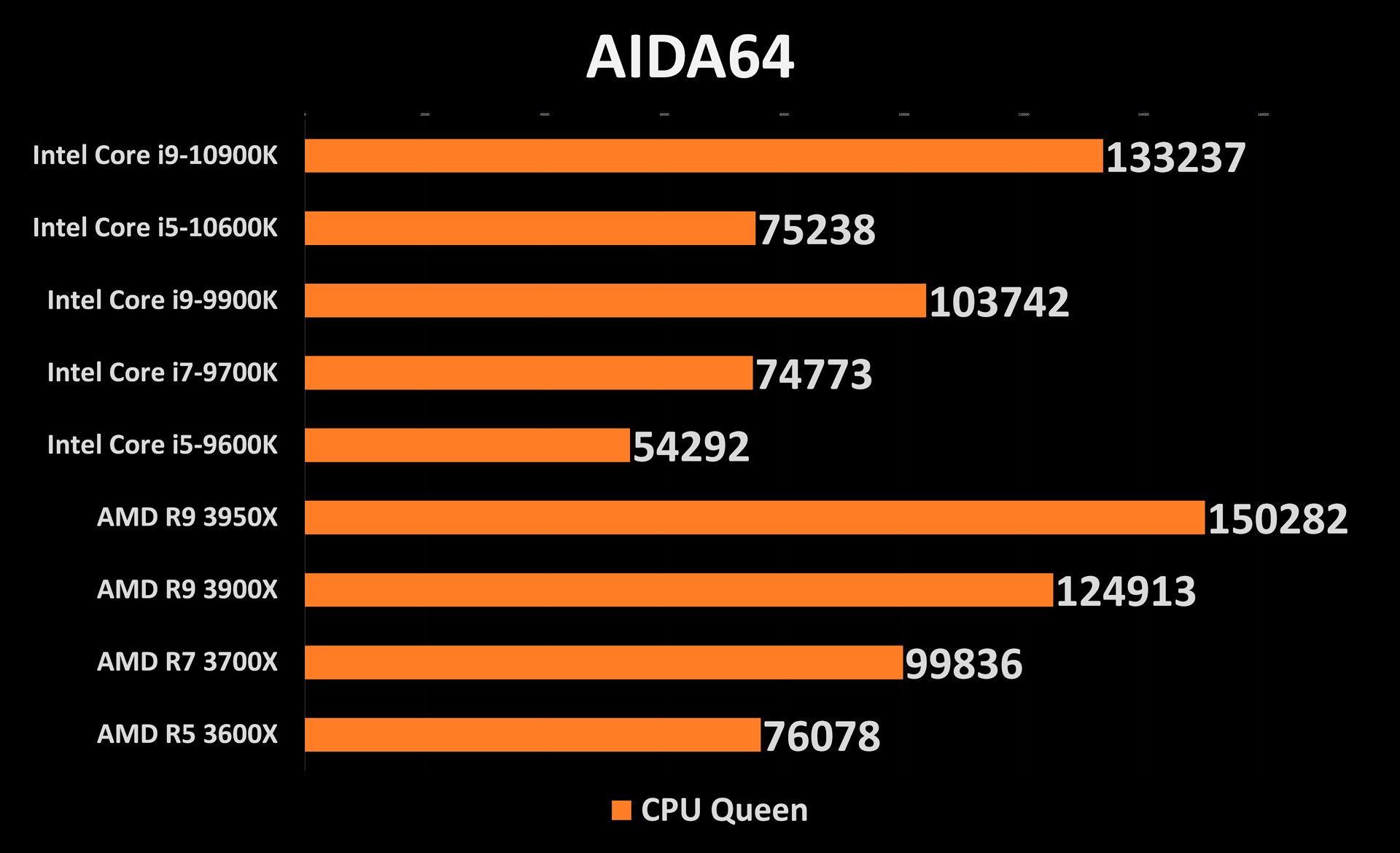 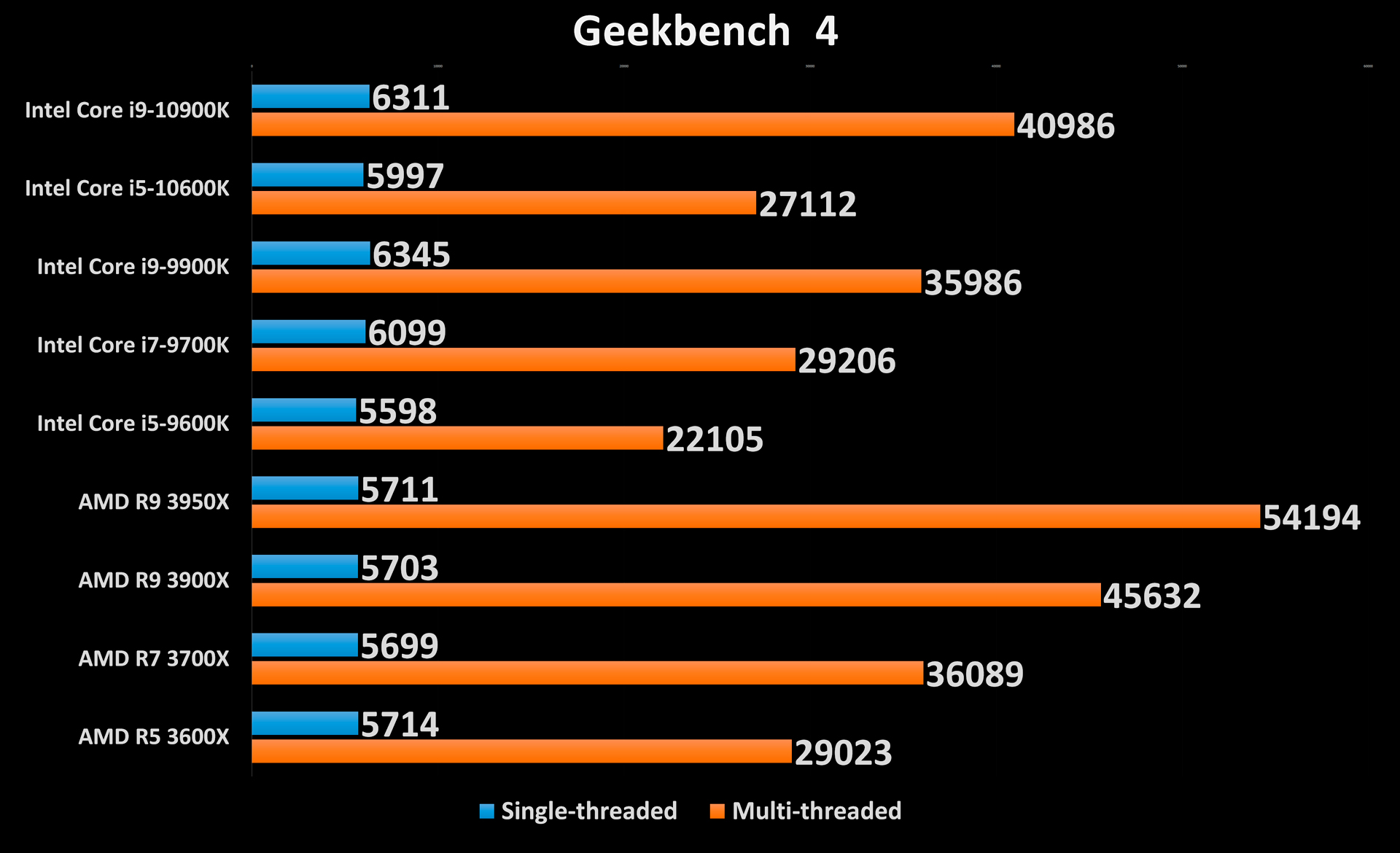 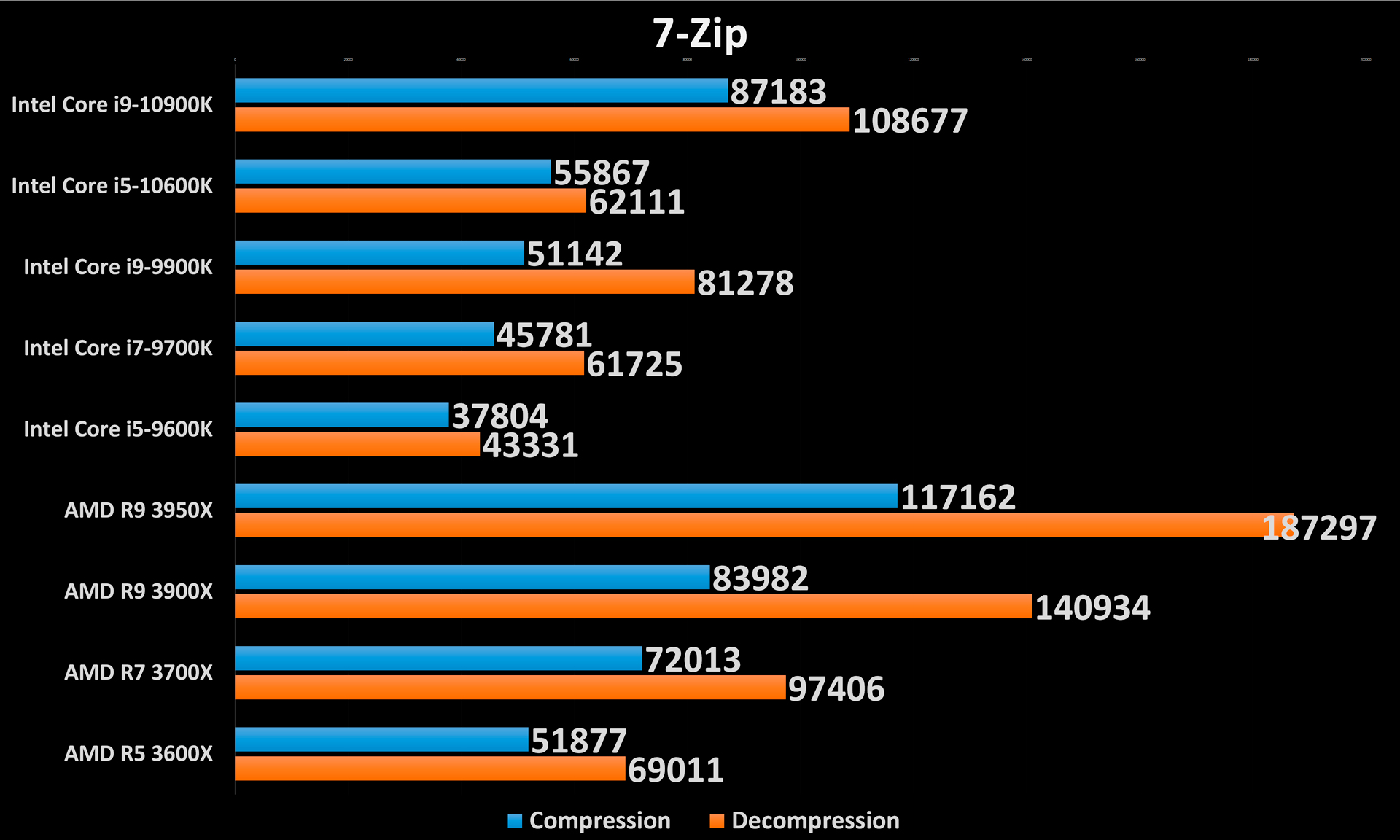 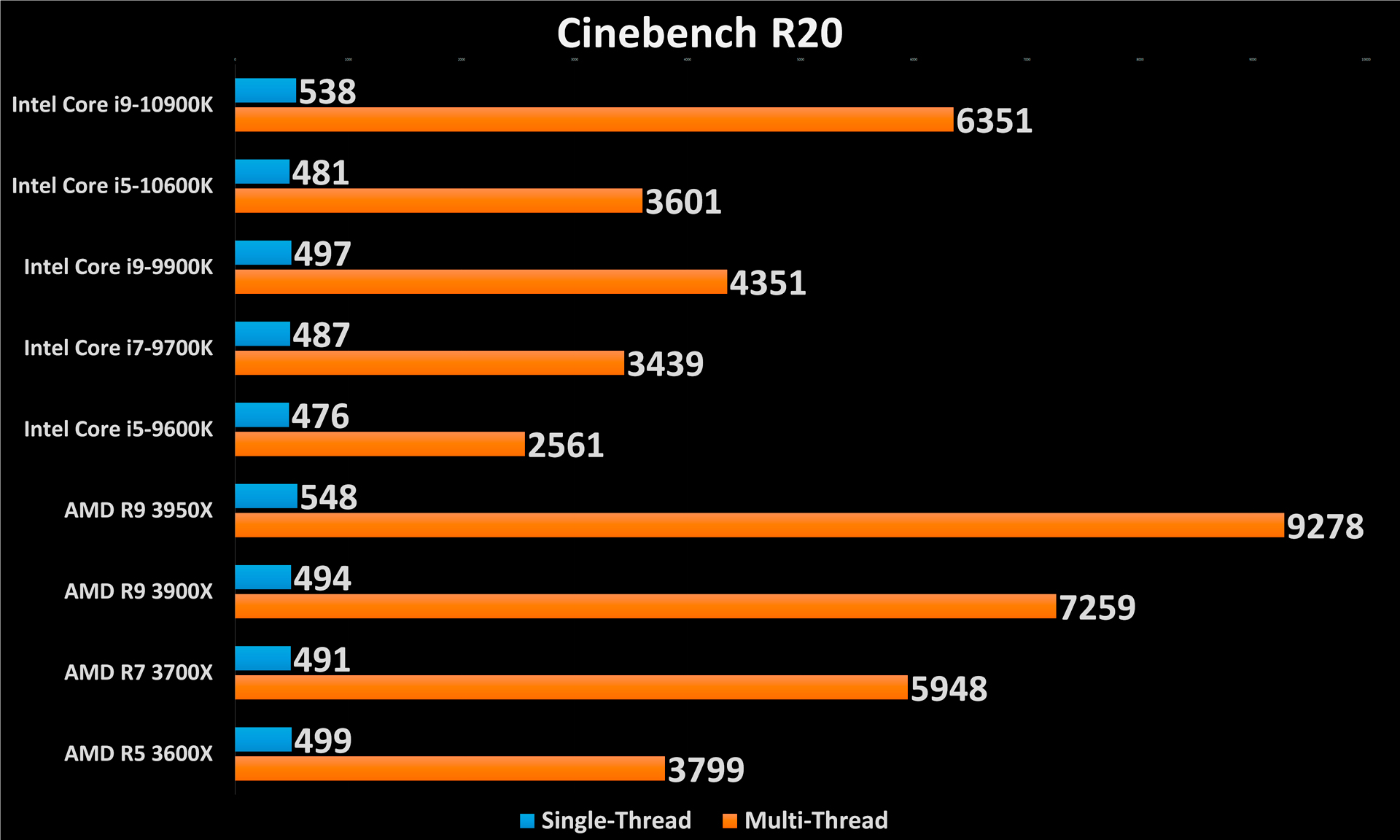 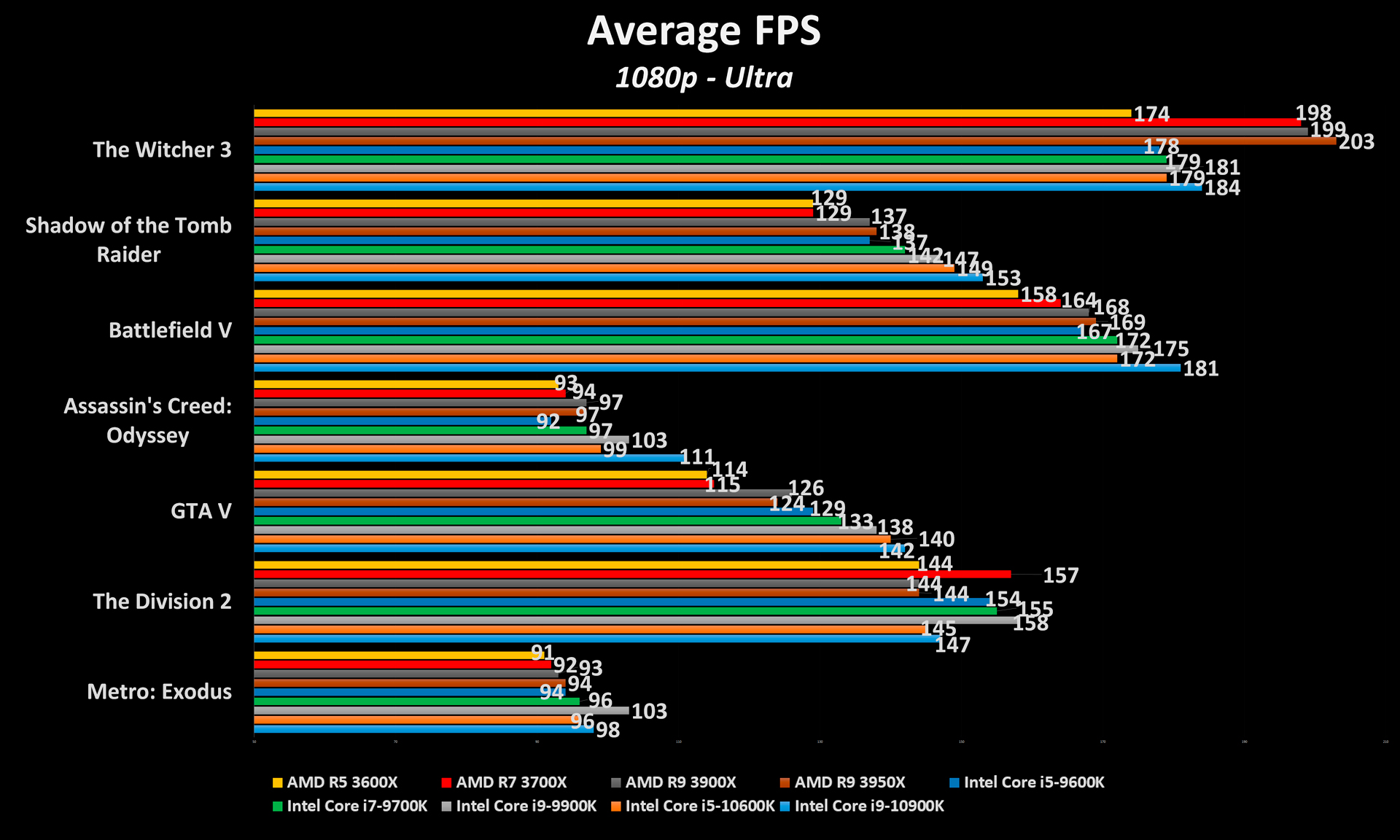 Since both of these chips are unlocked, it’s likely that users will attempt to push them beyond their factory limits. In the case of the i9-10900K, it’s an enthusiast grade CPU, likely to be water cooled, and is clearly targeted toward user aiming for maximum performance. The i5-10600K, on the other hand, is the value-earner and is already competitive with last generation’s i7-9700K. Seeing how far the chip can clock and under which temperature isn’t just reasonable, it’s downright exciting. 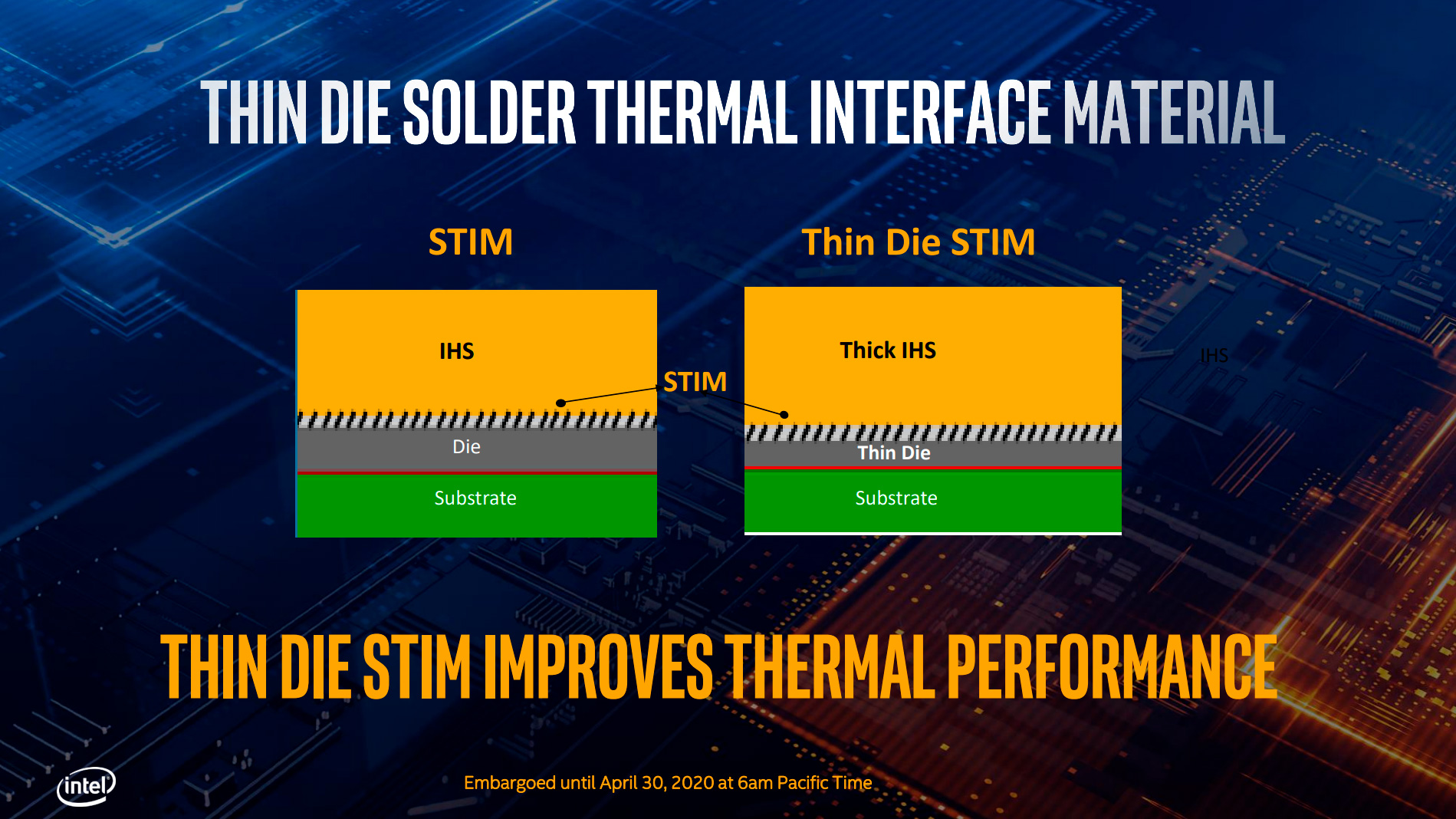 The Core i5-10600K was better with an idle temperature of 31C and a stock load temperature of 67C. Impressively, I was able to achieve a stable overclock of 5.1GHz at 1.36V. Thermals peaked at 76C under load with the Kraken running at maximum performance.

This performance is interesting because Intel has applied a new technique to improve thermals results. As you can see in the graphic above, they’ve reduced the thickness of the die and increased the thickness of the IHS, thereby increasing thermal dissipation. Given the generation-over-generation TDP increase (30 watts), these results do bear out the improvement of this new design under higher electrical and processing loads.

As I began this review stating, the CPU market is remarkably different today than it was even two years ago. In a big way, Intel has something to prove. As AMD comes along and releases CPU after CPU with higher core counts and increasingly competitive performance, the value proposition in tech circles has been changing. Add to that the fact that Intel is still developing on the 14nm process and you have a lot of consumers wondering whether Intel will be able to hold onto their top spot for much longer. 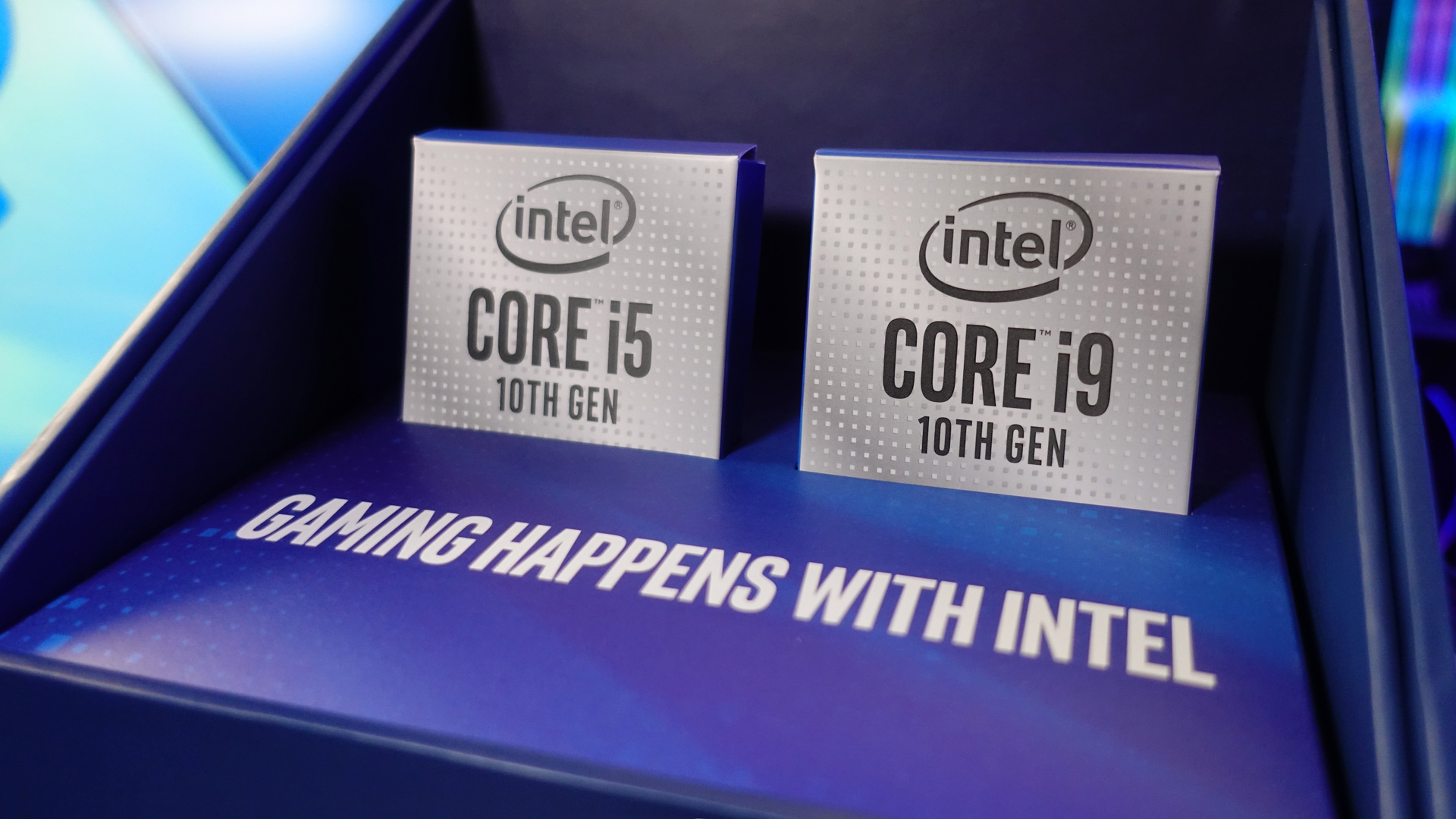 Looking at the performance of the processors on deck today, it’s clear that Intel’s gambit on clock frequency has paid off. The Core i9-10900K has taken the top spot as the world’s fastest gaming processor. It is an objectively good choice for gamers looking to blend gaming performance with workhorse content creation. I’ve used it extensively inside Premiere Pro and found it to be extremely responsive.

Compared with AMD’s Ryzen R9 3950X, it still falls behind in multi-threaded tasks (expectedly) so competes more directly with the R9 3900X. While the i9-10900K offers improved gaming performance, it also comes in at a price premium of $50-100+. If you’d like to take advantage of the Thermal Velocity Boost or dabble in overclocking, you’re also going to need a meaty cooler. This is a consideration for new builders, but I find it likely that many people considering the i9-10900K will likely already have an effective cooler. Still, it’s a potential additional cost worth considering — but the 10900K takes the crown for the best gaming CPU you can buy today.

The real value proposition comes in with the i5-10600K. As a mainstream gaming CPU, it makes for quite a compelling option. With its 6-core/12-thread configuration, it competes most directly with the 3600X. It beats it roundly when it comes to gaming while still offering impressive multi-threaded performance. Based on our tests, the 10600K may just be the most compelling option in the 10th generation line-up for mainstream gamers, though we’ll have to take a look at a couple of other options to say that with certainty.

Still, when considering the gaming market at large, it’s fair to say that content creators remain in a (growing) minority. While many people dabble or stream from time to time, the majority remains core gamers who want the highest performance per dollar. AMD retains the performance lead in overall functionality thanks to its multi-threaded performance and PCIe 4.0, but for gaming Intel remains the industry leader.

Perhaps more than most CPU generations compared against one another, the winner here is subjective. If you’re doing a lot of rendering and need the most cores per dollar, Ryzen is probably a better fit. If you want the best gaming performance, you’ll pay a bit extra, but Intel earns another win.

If you’re considering an upgrade, these are things worth considering carefully and I’d caution you not to buy into the online rhetoric. With competition as hot as it is, there are lots of discussions about who the real industry leader is. As always, you should buy into the product that best meets your needs, not the brand.

The product described in this review was provided by the manufacturer for evaluation purposes.
8.5Great
Pros
Cons
Tags
PC Building
CPUs
DIY