Getting the right microphone, especially if you’re planning on starting or upgrading your current stream set up, can be a bit daunting. There are so many different mics at drastically different price points, coupled with varied opinions on whether a USB mic works best for streams, or if you should spend the money on a full mixing board or XLR mic and input. For those who don’t want to break the bank, but still get a quality microphone for your streams and zoom calls, HyperX’s new QuadCast S aims to provide a quality piece, priced competitively with the top streaming microphone makers on the market today.

At first glance, the HyperX QuadCast S is a rather attractive microphone. The slender, cylindrical body has an elegant look, and the microphone itself doesn’t take up much room on my desk compared to my Yeti X from Blue.

HyperX knew who they were targeting with this microphone as well, as the QuadCast S has a built in shock mount. Normally, with other microphones, this Is an accessory you must buy alongside a boom stand to make the most out of your set up. With the QuadCast S, it’s included as part of the package and design of the microphone. It even comes with an compatible screw to mount it onto a standard boom arm if you already own one. As a result, it was really convenient to just be able to mount the mic on my own boom arm instead of trying to find a spot for it for my desk that would be ideal and not pick up too much background noise. 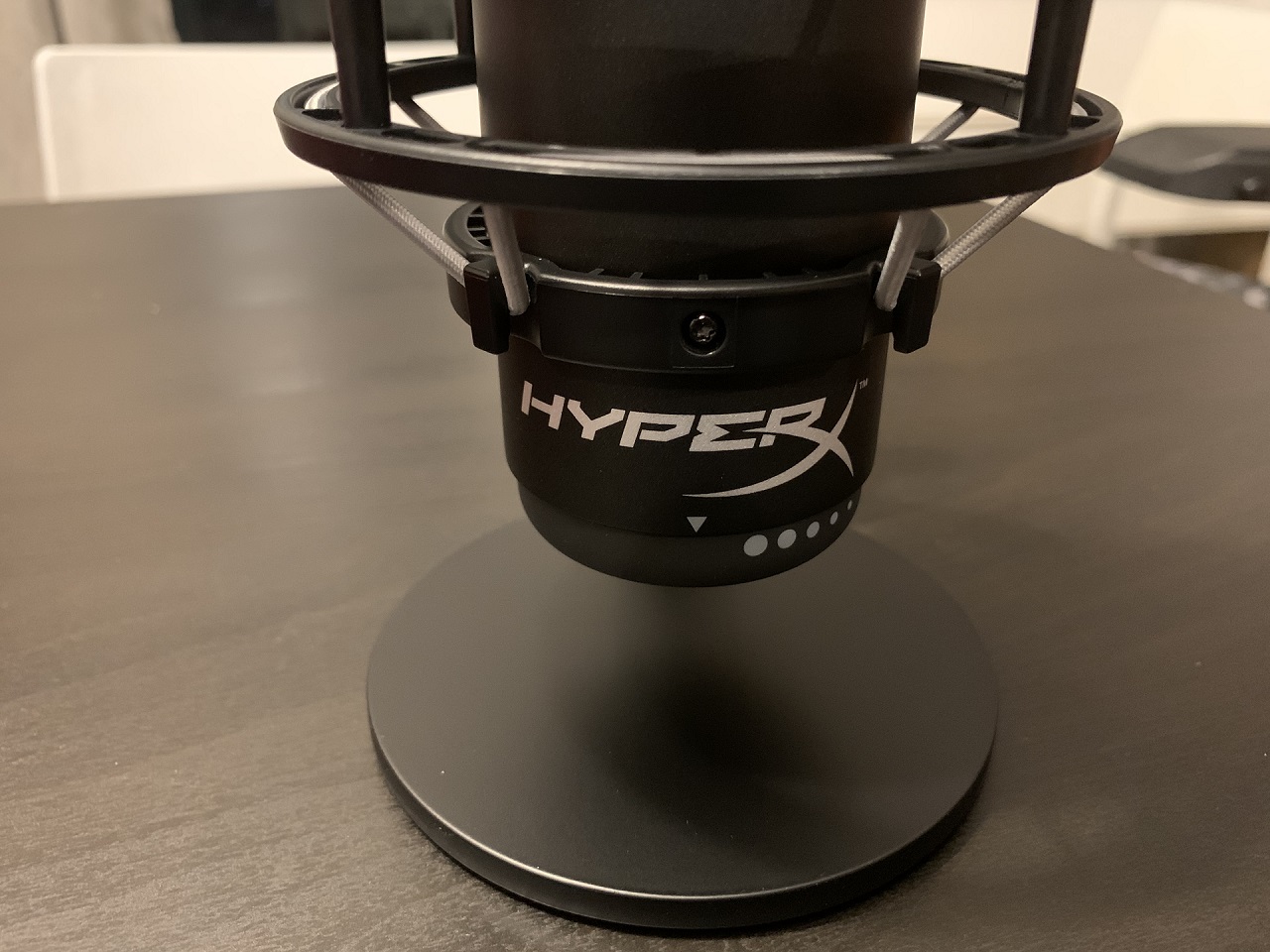 Instead of having a gaudy gain knob on the front of the mic as well, it’s instead on the bottom as a dial, keeping the mic slim and streamlined. Additionally, muting the QuadCast S is as easy as tapping the top of the mic. The QuadCast S’ built in RGB lighting will switch off when muted, reminding you at a glance that your mic is silenced.

The RGB lighting is also a nice touch, especially with so many set ups today having lighting effects. You can control the lighting effects through HyperX’s NGENUITY software. There aren’t too many options available for the different effects, like a wave, static color, lightning flash, and a few others. You can also adjust the individual zones to a different color or effect should you choose. However, I found myself sticking with the default wave scheme, I honestly thought it looked the best.

Also, seriously, every other microphone maker take note – USB-C should be standard moving forward. I would have loved a USB-C to USB-C cable, or at least a second cable to give me the option, but I understand at least making one half the cable USB-A. The cable itself feels solidly built, and I don’t feel as though mounting this on my boom arm will put stress on the connector to the point where it will bend – something that has happened on my last two Blue Yetis and my most recent Yeti X.

Where I was really interested was audio quality without any filters or EQ utilized. Many mics on the scene now, specifically the Yeti X, have their own software which can enable features to give your voice a unique sound all your own.

However, what if you just want the natural sound of your voice to come across – how clear is the QuadCast S? Most often when watching a streamer or podcaster, the mic is going to be close to their face. This is to take advantage of the “proximity effect,” giving your voice a clear, more natural tone overall. 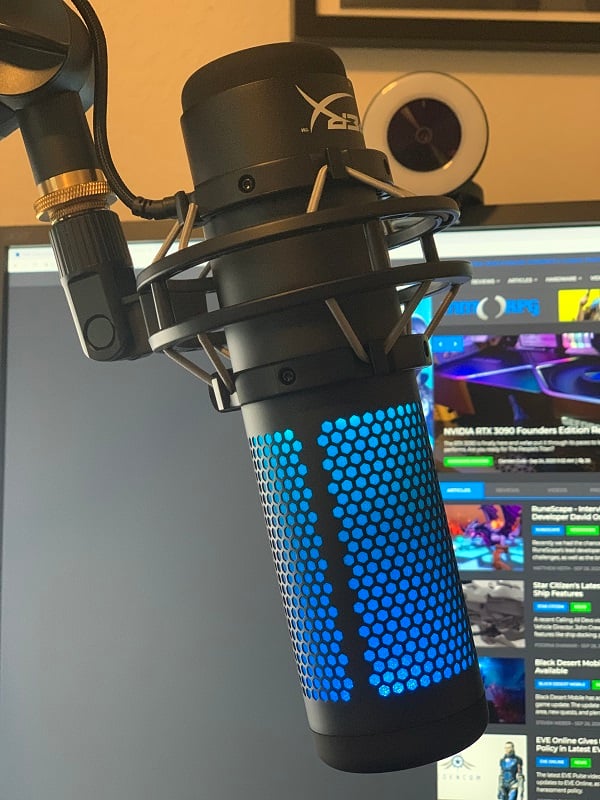 This is evident in my two tests – one where the microphone was on my boom arm, near my mouth during the whole recording. The other had the mic directly infront of me on the desk stand, about 3 feet from my mouth – and about a foot below, both using the Cardioid pattern. I’ve also embedded a recent Twitch stream where I used the microphone (with Nvidia Broadcast filtering the background noise out) so you can hear the microphone in real world use, using EQ on the audio.

You can hear a distinct difference between the two recording, and even the Twitch embed – the boom arm sounds fuller, more robust, definitely bassier. The desk recording leans more into the treble, removing some of the bassy quality the mic gave my voice when narrating The Hobbit. Neither sounds bad – but if you have a boom arm that is definitely my preference in terms of the sound quality.

One thing I noticed was the built-in pop filter was definitely doing its job. I do own a pop filter, but I didn’t feel the need to slip it onto the mic, instead I found the built-in solution to be rather adequate.

Missing though are the full suite of effects in the software that define much of the market at this price range. Sure, the Yeti X is more expensive, and with it comes the expanded software, but it’s a shame that the HyperX NGENUITY software doesn’t exactly allow you to tweak your sound the way you want, instead you’ll need to rely on third party tools should you go that route.

The HyperX QuadCast S is a cool little microphone, one I wouldn’t mind recommending to anyone looking for a quality streaming mic. But does it do enough to unseat the current king of USB condenser mics, the Blue Yeti? For $30 more (the Blue Yeti retails for $129.99), you get a slimmer mic that performs really well, as well as a built in shock mount and the attachments to use on either your packaged stand or an existing boom arm. But does the audio quality help sell the deal?

I actually think so. And it’s not to say the Yeti, or the Yeti X are bad buys. But the value of the HyperX QuadCast S is solid. The sound quality out of the box is incredible – especially when paired with a quality boom arm to take full advantage of the proximity effect. And while the Yeti X might offer a more customizable experience with the bevy of options in its Logitech G software, it’s also $40 more than the QuadCast S, and $60 more than its cheaper brethren.

I really love the design and look of the QuadCast S as well – especially the simple tap of the top of the mic to mute the audio. The RGB lighting is very much on brand with PC gaming nowadays, and while I do wish there were more preset lighting effects, I do think it’s a definite upgrade over the solid red in the previous QuadCast.

The HyperX QuadCast X is a stellar microphone. It’s one I think I’ll use for quite a while now, and have no problem recommending if someone has a little extra money in their budget over the Blue Yeti. It’s a great microphone that can help any budding streamer or podcaster on their way to powering up their audio for their content creation needs.