Are you looking for a new MMO mouse? HyperX is hoping to fill that role with the Pulsefire Raid. It features 11 programmable buttons, a high-end Pixart 3389 sensor capable of 16K DPI, and Omron switches rated for 20 million clicks. With an MSRP on $59.99, does it offer enough to justify a place in your shopping cart? Join us as we find out! 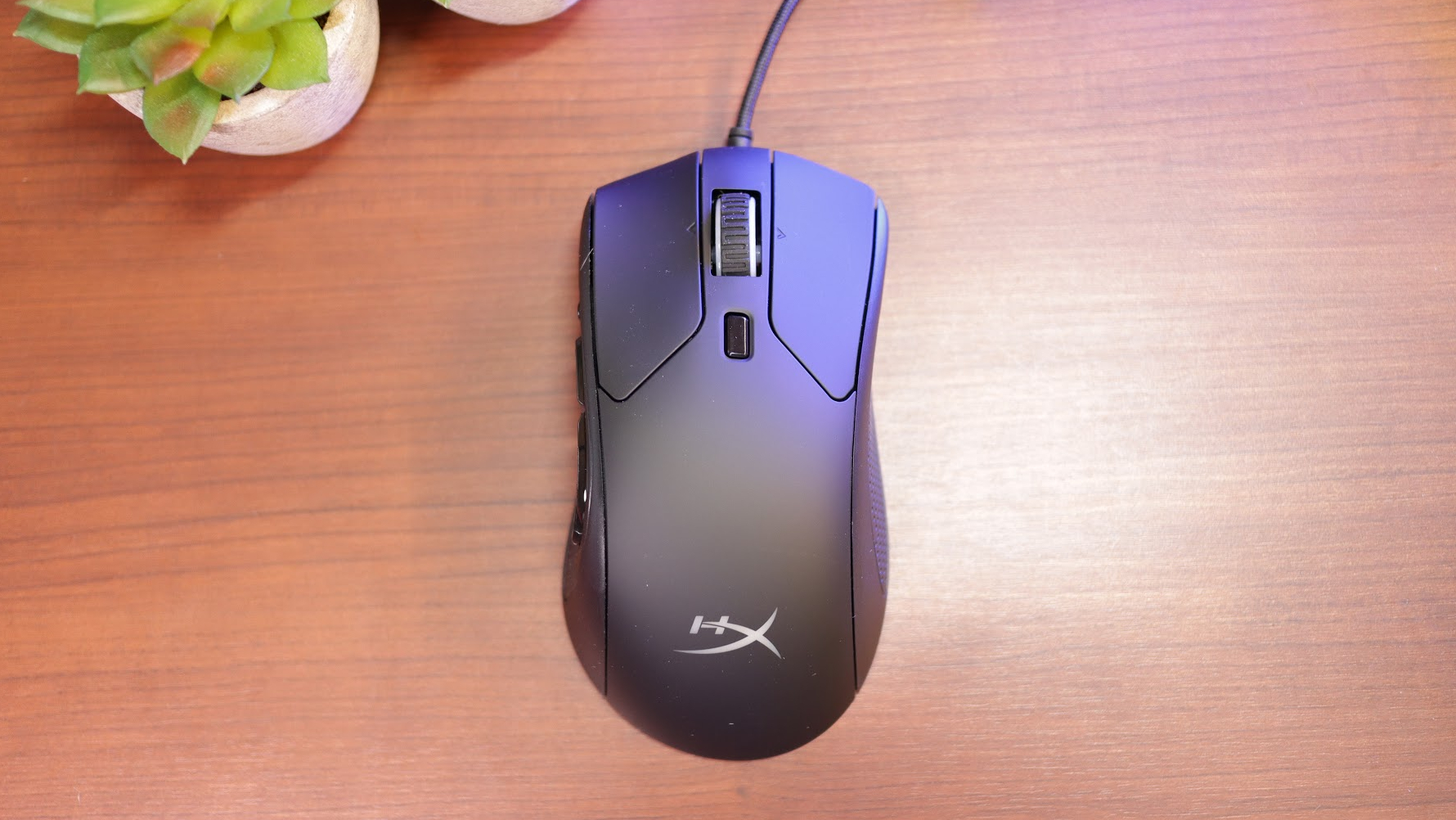 The market for quality MMO mice from major vendors is contracting. We pretty much have the same array of choices we’ve had for years, so when HyperX emailed me about the new Pulsefire Raid, I was excited to take a look. It features a total of 11 programmable buttons, which can be set to trigger macros or keyboard commands from inside HyperX’s NGENUITY software. As an MMO mouse stalwart, even I have to admit that the last row of the number grid on my Corsair Scimitar often goes unused purely due to location. Having slightly less buttons, so long as they’re intelligently placed, really isn’t that big of a deal. 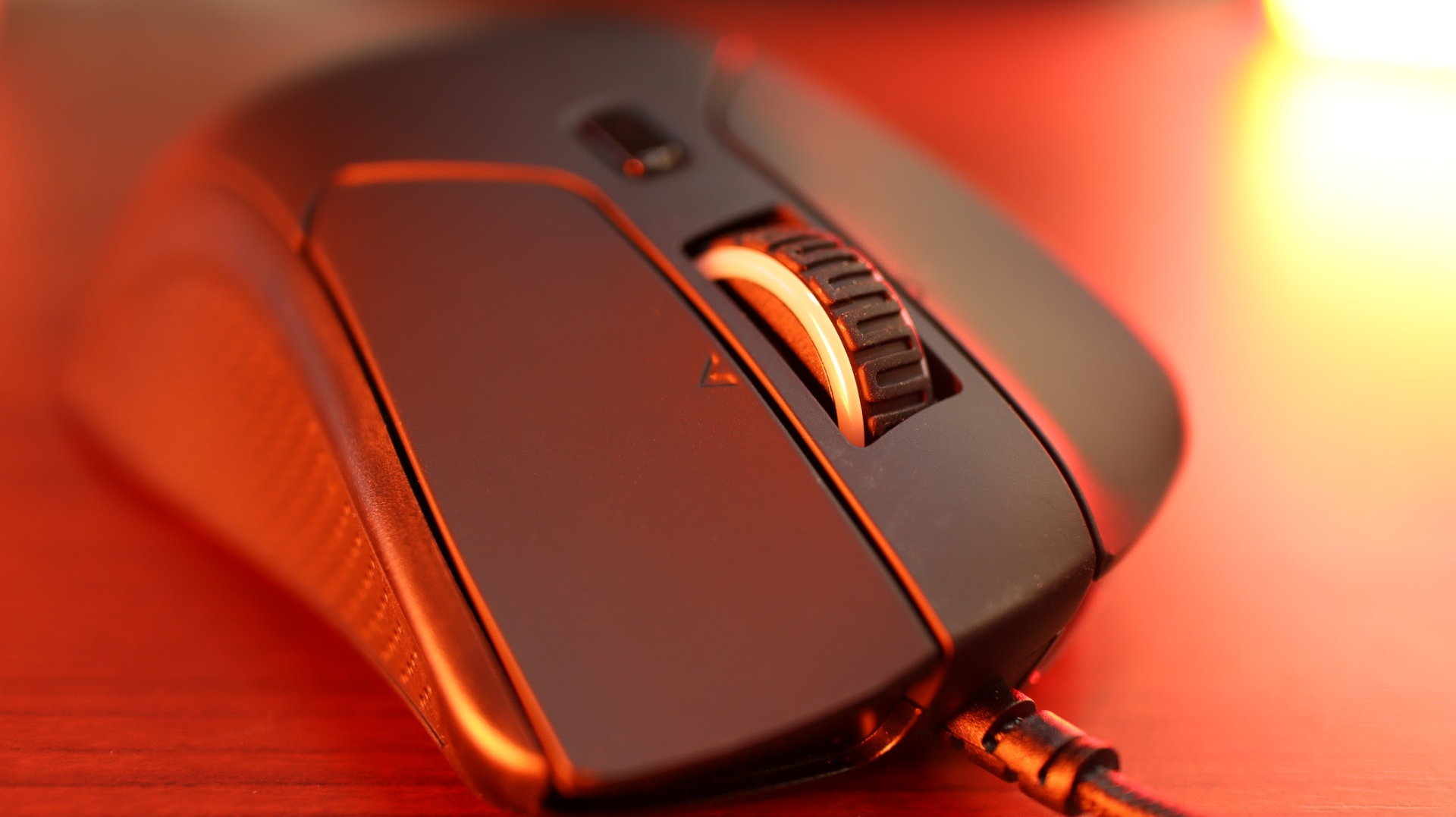 Button count is always a tricky thing. Mouse vendors always try to inflate their button count, including buttons like lift and right-click, that you would never remap anyway - and that’s really what this comes down to: additional customizable inputs. The Raid has five buttons on the side, left, right, and middle-click, and the DPI selector. The mouse wheel can also tilt either direction for two additional inputs. Removing the left and right-click, that’s nine inputs up for customization, but the DPI selector is cumbersome to reach, so it really feels more like eight.

The shell of the mouse is ergonomic and best suited for a claw grip. It measures 127.8 mm x 71.0mm x 41.5 mm and felt a bit too narrow to comfortably use a palm grip without dragging my ring and pinky on the desk. At 95g without the cable, it’s lightweight but felt too large to use a fingertip grip style. Most of the mouse is standard matte plastic but the sides use textured rubber for a grippy feel. For my own hybrid style of grip/palm use (which I learned from years with thumb-grid style MMO mice), I found the Raid to be a little awkward to hold. 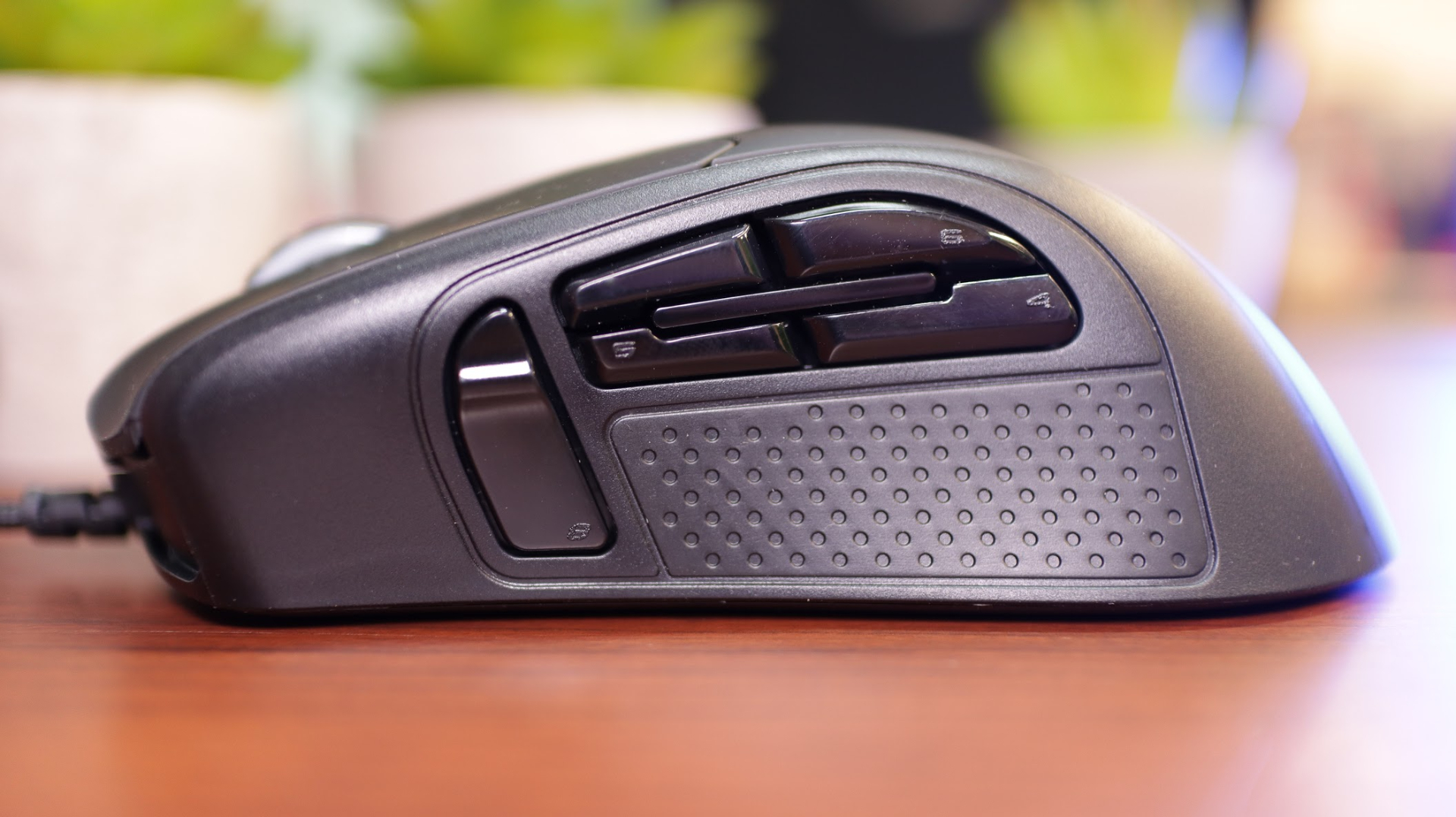 The cable is also only okay. It’s braided and flexible enough to not push the mouse around, but it has a terrible memory for how it was bound and remained kinky throughout my test window. Over time, I do expect this to improve but I’m not confident it will ever completely go away without hanging the mouse overnight or otherwise taking additional steps.

Under the hood, it uses a Pixart 3389 sensor which delivers accurate, responsive tracking up to 16,000 DPI. I personally find such high sensitivities completely unusable, but it felt reliably accurate up through 3200 DPI. It’s also very responsive to flicks with a 50G of acceleration and a max speed 450 IPS. The Raid also uses snappy Omron switches for its clicks, each rated for 20 million actuations each. Considering the modest price compared to other big-brand MMO/MOBA mice, these specs are quite good.

All of your customization is done within HyperX’s NGENUITY software. It’s labeled as a beta, which is remarkable considering how long the software has been available, but it still feels rough around the edges. You’ll be able to program macros, Windows shortcuts, keyboard commands — pretty much anything the average MMO player would be looking for, but it involves more clicking around to get done and generally doesn’t feel as polished.

NGENUITY is also where you’ll control the mouse’s RGB. There are two zones: the logo under the palm and the mouse ring. It looks good and having more than one zone is a welcome addition at this price, but don’t go looking for more than basic color shifting or other standard lighting effects. 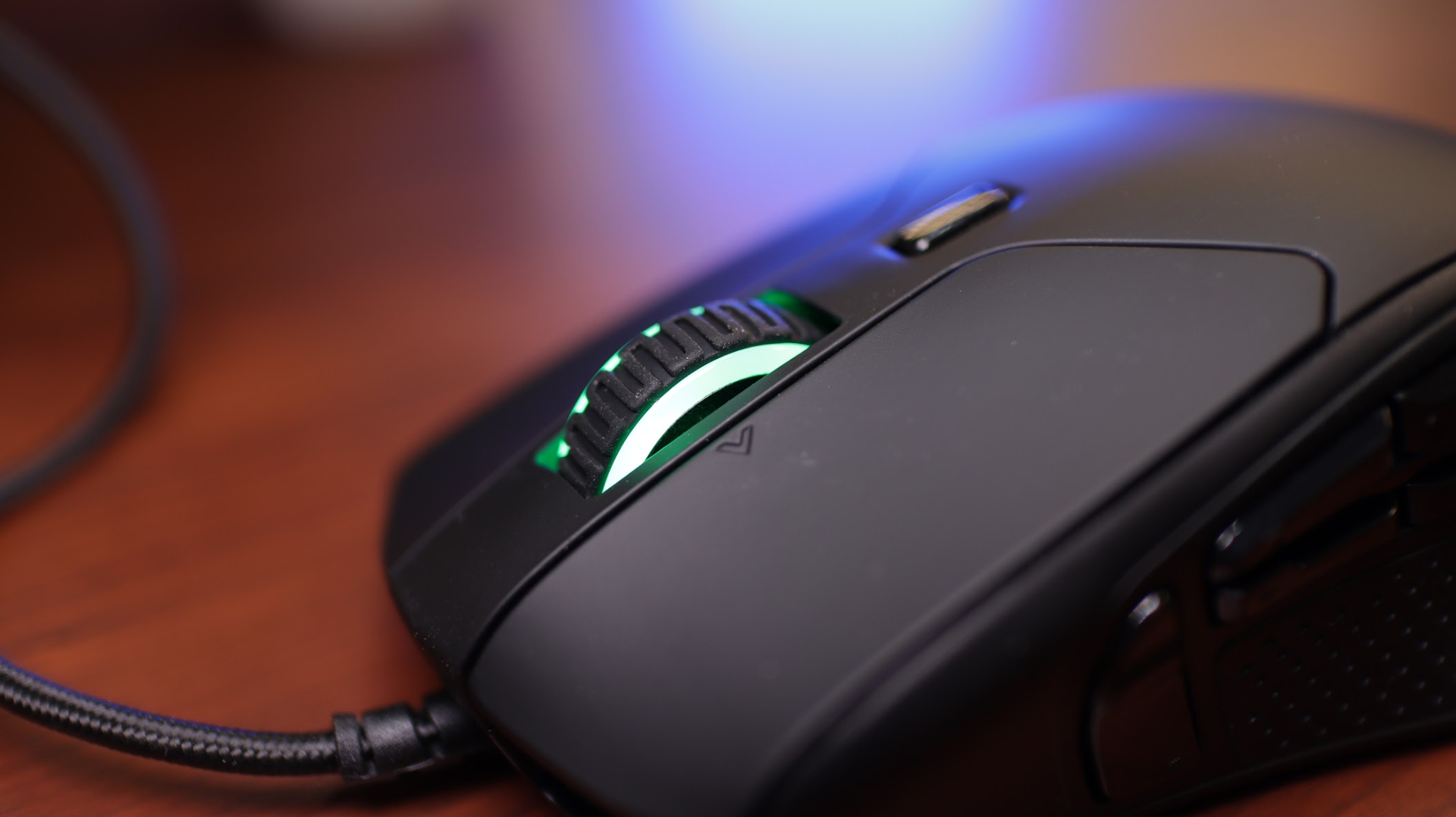 I’m not the biggest fan of the Pulsefire Raid’s button layout. The side buttons are broken into 2x2 rows above the thumb and a sniper button in front. The problem is that the buttons aren’t distinct enough and I often pressed two at once by accident. This got better in time, but the gloss finish really made it difficult to adapt to and feel accurate with.

I also found the mouse tilt commands to feel rather unnatural. Your mileage may vary, but flicking the mouse wheel left and right never became second nature the way I wanted it to. I did like that middle-click was more tactile than tilting, however, so I wasn’t having the same problems I had with the side buttons.

As a normal mouse, the Raid worked well. After adapting to a consistent claw grip, I was able to play shooters accurately and not miss shots I might make with my Model O. At the same time, I wish HyperX had opted for better glide feet. The PTFE gliders on the Razer Viper and Glorious PC Gaming Race mice slide along my desk and mouse pad (I tried both) much more smoothly. The Raid doesn’t drag, but it’s not nearly as fast of a mouse. 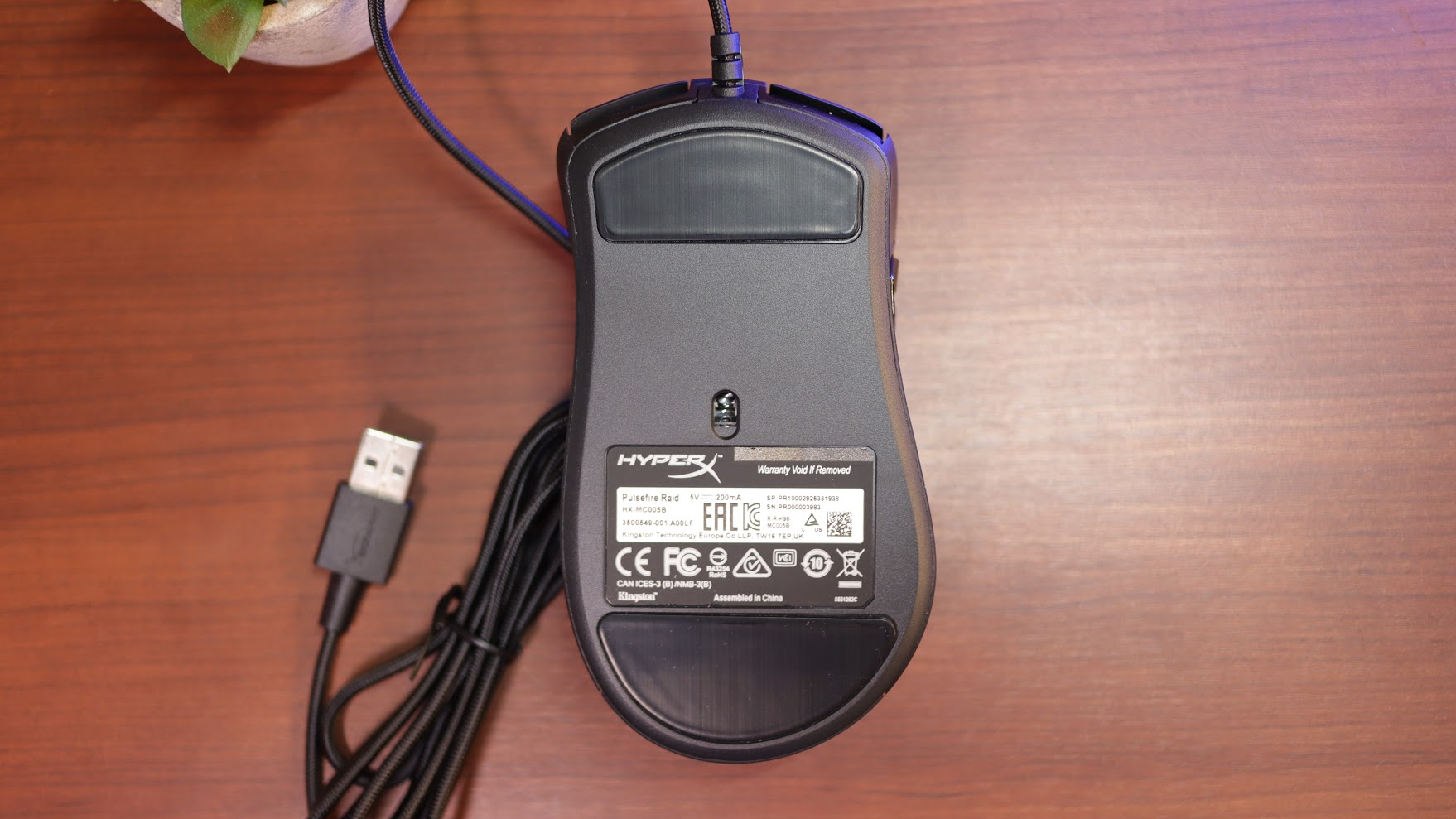 For $59.99, the HyperX Pulsefire Raid is a decent but not outstanding mouse. If you’re looking for a few extra buttons to put more commands at your thumb and don’t want to resort to a full-on button grid, this is a way to do that. In time, I’m sure I could get used to its quirks, but there’s enough that it won’t be causing me to switch any time soon.