With RGB everything taking control of the market it is nice to see that gaming-oriented hardware manufacturers are still working on their subdued kits.  Recently on the market HyperX has delivered a full black Fury line clocking in at 3733 MHz!  Fully XMP compatible, it’s quite a sight to have DDR4 of this speed available at an affordable price.  Most mainstream kits are in the 3000 and 3200 range so we will take a look at how this kit stacks up against the common competition. 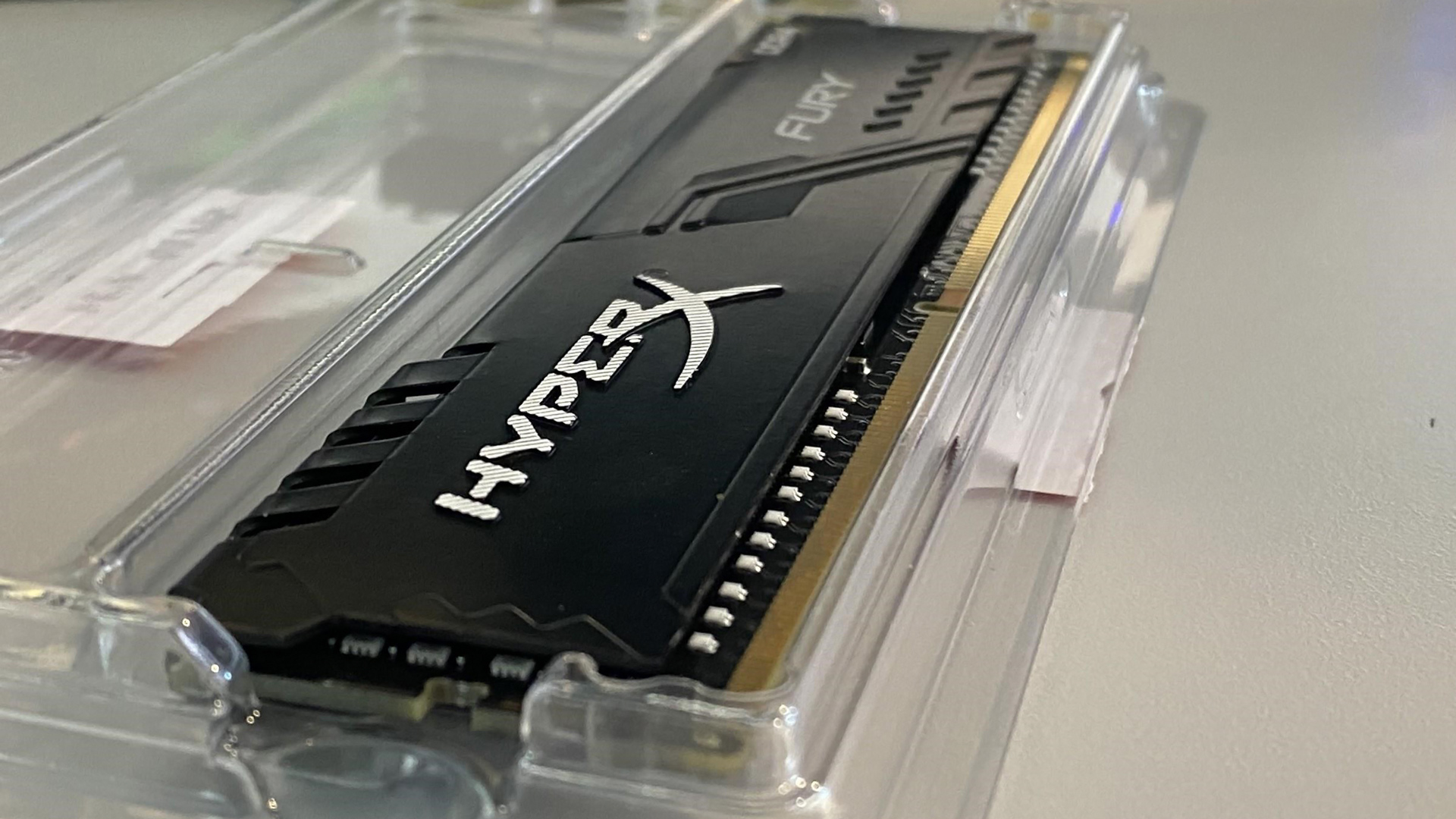 You might be asking yourself “why do I care about speed”? If I’m being honest in a lot of situations it doesn’t necessarily play a huge role, especially not to hobby gamers.  But what about if you’re looking to squeeze every drop of performance possible for your money? Does RAM speed really matter? The short answer is yes, it definitely does.  When you use your computer your RAM gets used all the time to quickly store and retrieve data being used by your CPU (or GPU is some cases).  The limiting factor of how quickly that data is stored and retrieved is the frequency at which the RAM is operating.  (Technically CAS Latencies [aka timings] play into it as well but this isn’t aimed at a deep dive article into how RAM operates).  The logical conclusion that can be drawn is if you can read and write faster to the RAM the overall performance of the task your PC is completing will go up.

In order to examine this there are a number of tests that can be completed.  While booting up various games and running FPS tests at various DDR4 frequencies is an option it can still be debated if this is a reliable way to compare the different values.  Unless you are running games that include a preset benchmark, the variability between game plays could play a role in the overall outcome of the test.  For that reason, here at MMORPG.com, we usually stick to benchmark programs.  For this article those are AIDA 64, PC MARK, and SuperPI. 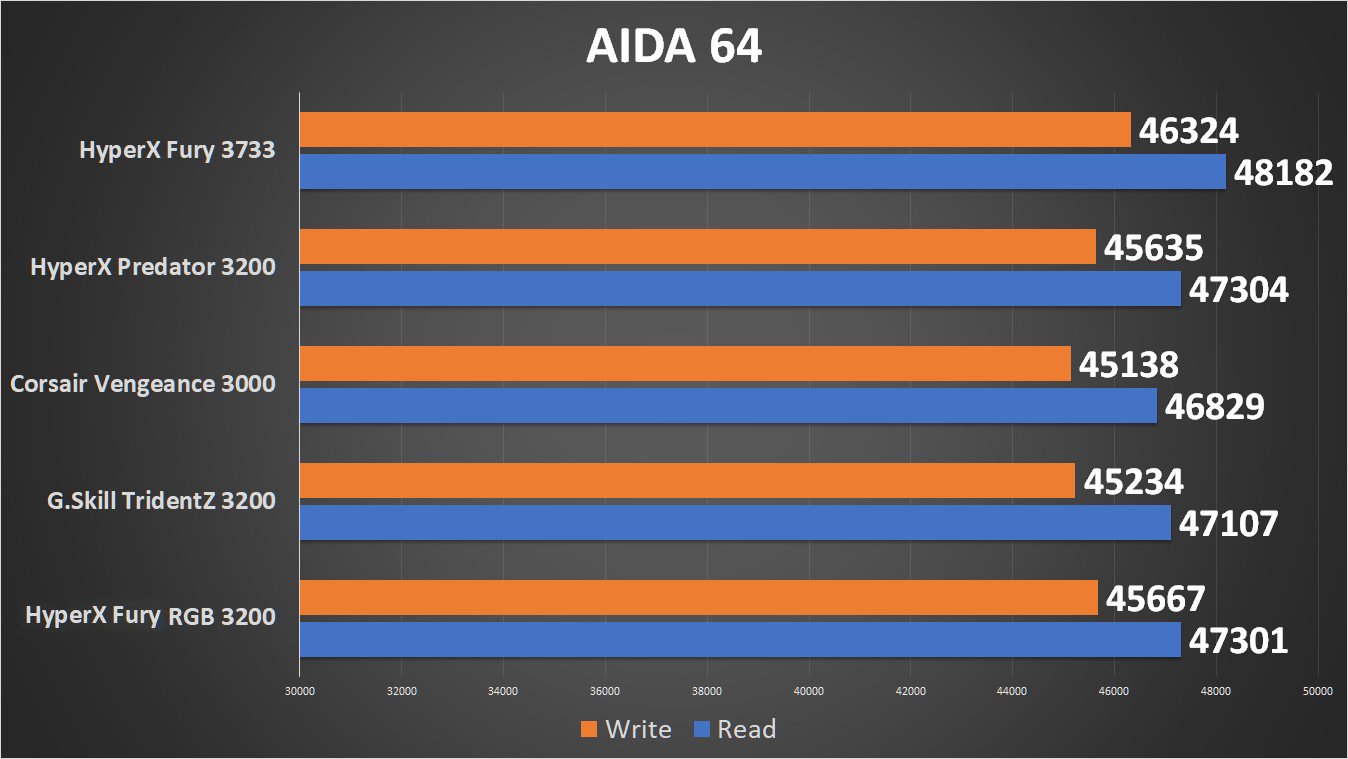 First up is AIDA64, a well known piece of benchmark software that can test and stress various, targeted components on your PC.  While there is the option to test all major systems at  once we run AIDA64 in memory only mode.  This reduces the power consumption of the CPU, and subsequently the overall package temperature, and focuses solely on the RAM -  taxing it both read/write operations as well as power consumption and temperature.  As expected, the 3733 MHz kit does beat out the other kits tests but not in a multiplicative sense.  There is a diminishing return (of sorts, for lack of a better term) as often at higher RAM frequencies the latencies go up as well.  The effect of latencies can be seen if you compare the 3200MHz kits tested, noting that the G.Skill TridentZ has slower (higher) timings than the other kits. 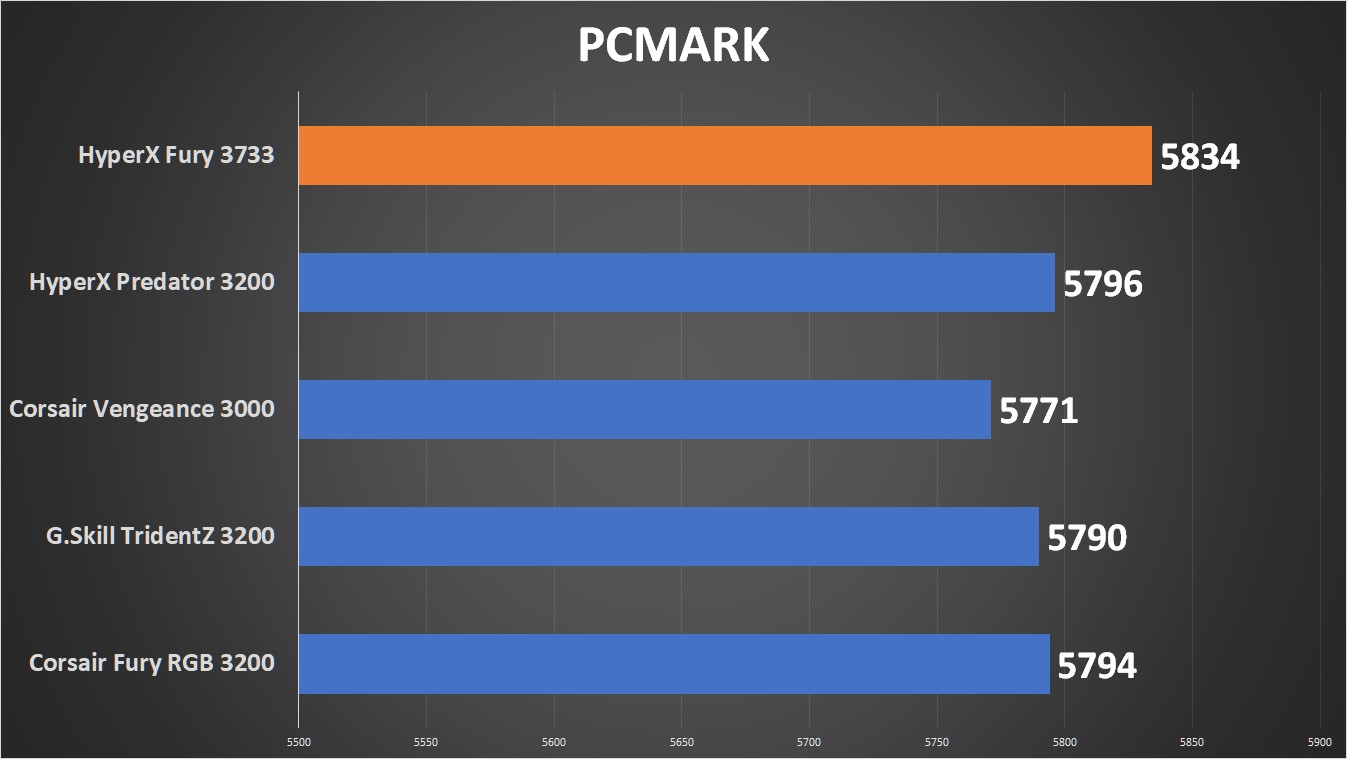 Next up is PCMark and it’s not necessarily a go to for a lot of people that are looking to test out their RAM.  PCMark is a decent way of putting a number on how well your system can perform low-intensity tasks as a whole, which includes menial tasks we take for granted like web browsing, opening documents and spreadsheets, moving files around, etc.  Because these are low volume tasks they can be influenced more by RAM speeds than capacities.  Higher is better. 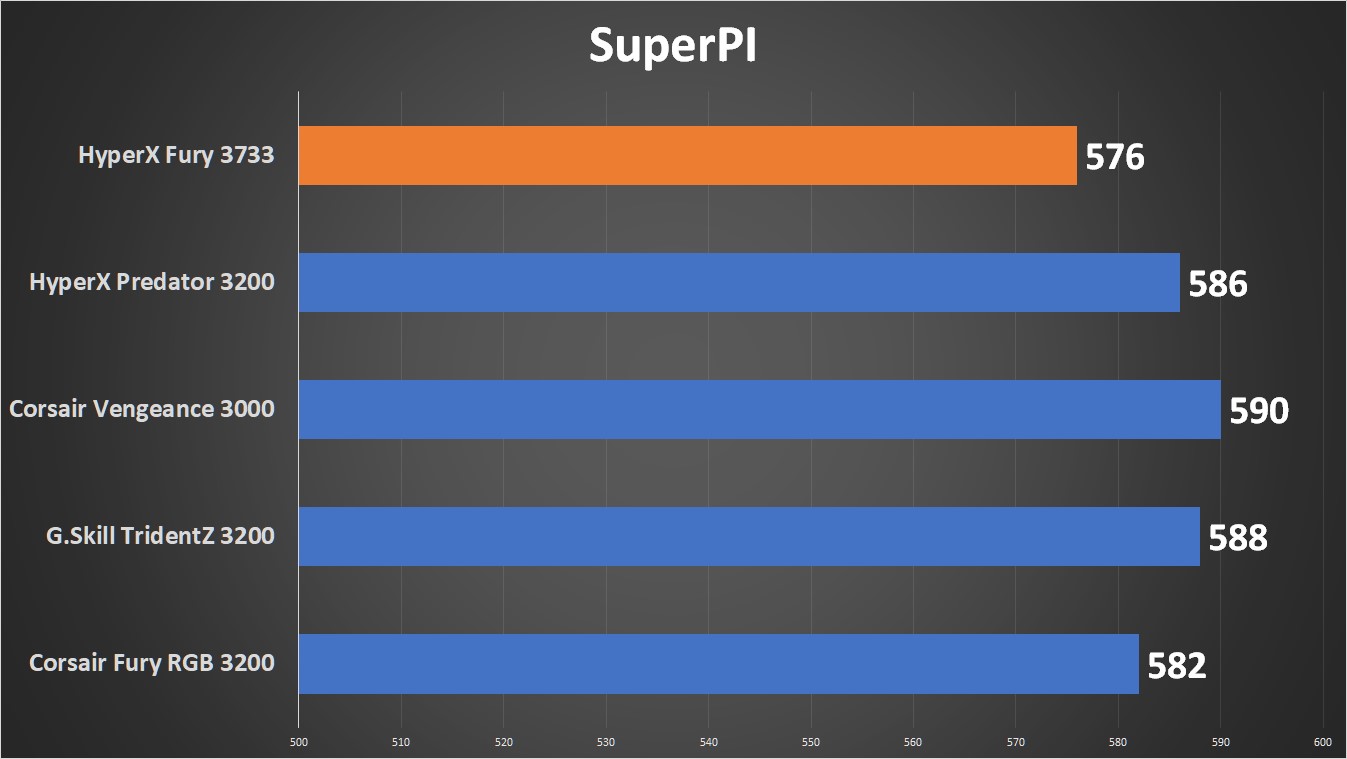 Lastly, for all those super math nerds out there, is SuperPi.  SuperPi is a simple program that tests how fast a system can calculate a certain amount of digits of Pi.  Here at  MMORPG.com that number is 32 million.  Since all these calculations being run can be subsequent and inclusive, the data needs a place to sit while all the various calculations are finished.  The chart is in seconds with lower scores being better. 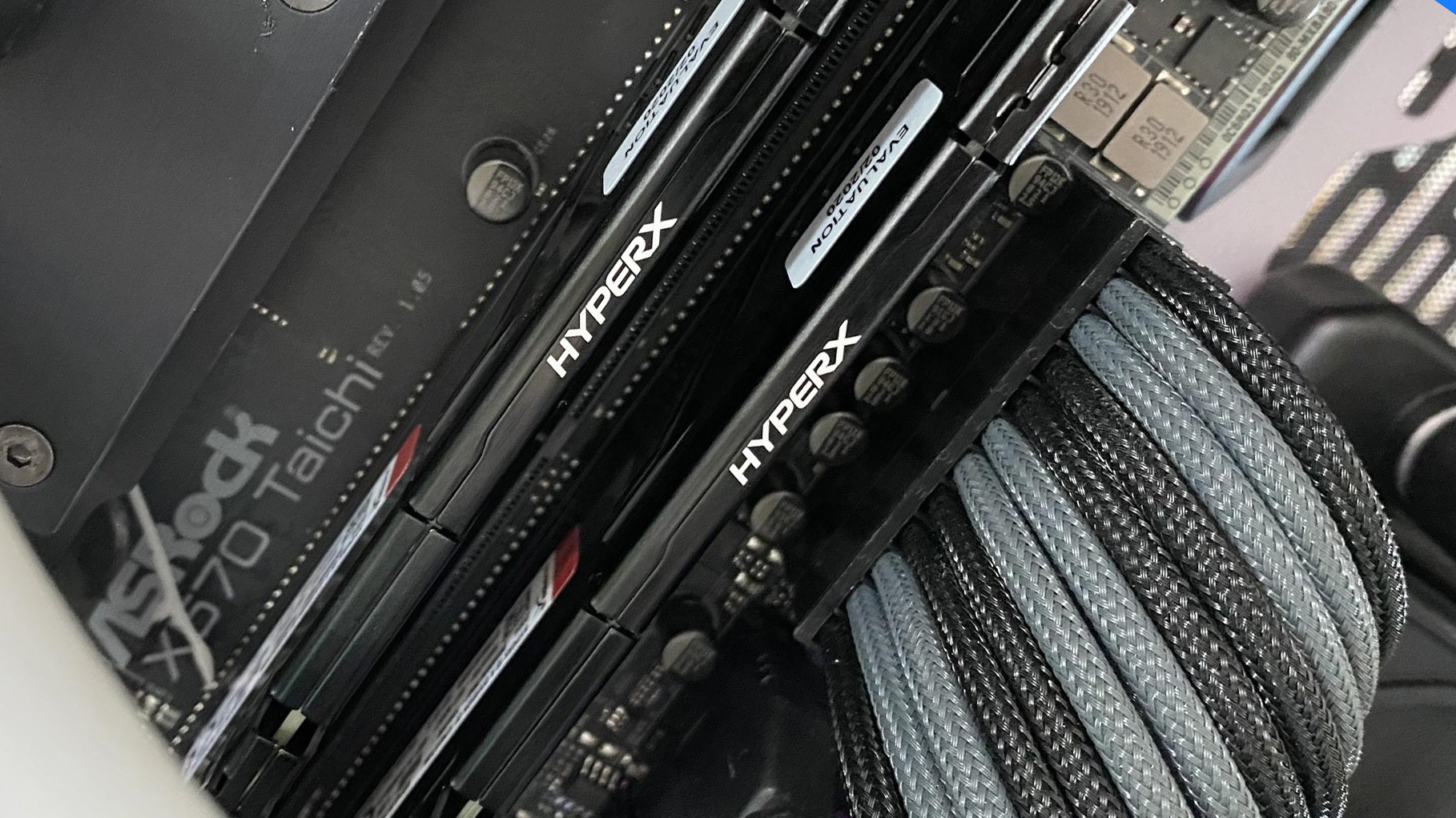 The bottom line is the HyperX Fury 3733 MHz kit is quite impressive in its speed and stability.  I didn’t have to adjust any timings or voltages in BIOS and simply set the corresponding XMP drop down and left it alone.  While a latency of 19 is fairly slow latency compared to other kits of a slower speed it could be possible to tighten those timings up if you have the time, ability, and inclination.  The question, however, is if the juice is worth the squeeze?  That’s going to be up to each individual person.  A 16GB (2x8) kit of 3200MHz will only set you back $85 on the HyperX site right now compared to the $114 on this kit.  So do you need to pinch pennies or do you want to squeeze every ounce of performance out of your system? If you know the answer to that question then you know what kit to buy.

The product discussed in this article was provided by the manufacturer for the purposes of review.
8.0Great
Pros
Cons
Tags
PC Building
DIY
Memory
Components