As the worlds of content creation and gaming collide, the importance of flexible and powerful technology is becoming more and more prevalent. Brands are working hard to develop accessories that will help both professional and up-and-coming streamers succeed.

HyperX is a company that has been helping bridge that gap for years. Their most recent USB-powered microphone, the DuoCast, hopes to offer everything a gamer needs to be broadcast-ready. Equipped with easy-to-use controls, customizable RGB strip light and an included shock mount, the DuoCast is hoping to help provide a professional solution to streamers. With support for Windows, Mac, PS4 and PS5 the DuoCast aims to be the jack of all trades for gamers.

Can this microphone actually provide the all-in-one audio solution gamers need to bring their stream to the next level? Grab that coffee, kick back and find out in our review of the DuoCast USB Microphone, provided by the good folks over at HyperX.

The DuoCast USB microphone follows the design philosophy of the other HyperX Cast series of microphones. However, it leans a bit more into a minimalistic design with a clean black matte finish and a toned-down RGB light strip that wraps the circumference of the body of the microphone. The included shock mount and stand also look similar to that of the SoloCast. The mic also comes with a mount adaptor for attaching to a boom arm or traditional mic stand. 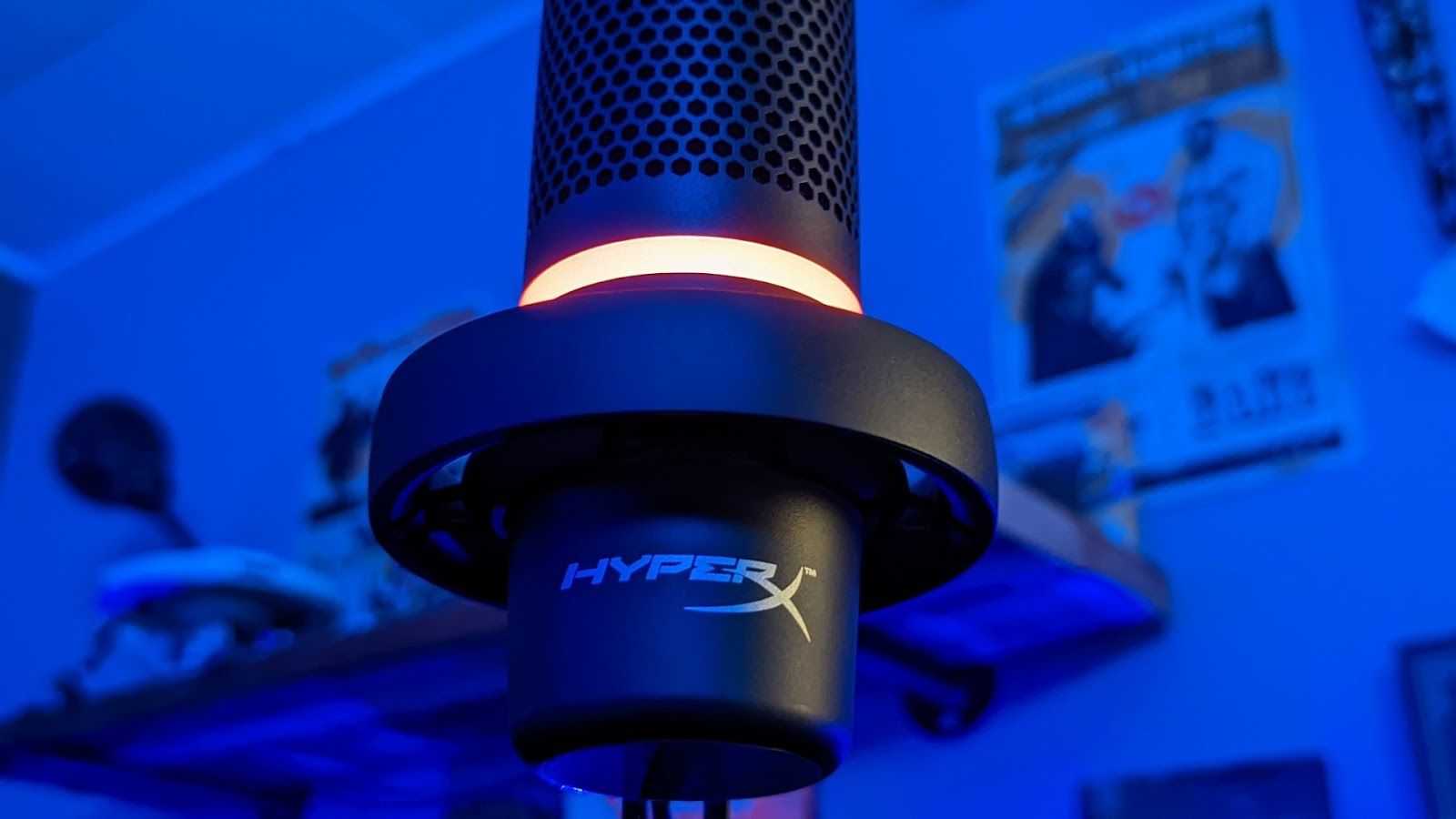 Following the smart design of its predecessors, the DuoCast offers some simple but extremely useful controls. They come in the form of a gain control and selector for polar patterns located on the back of the microphone. Located below this is a headphone jack for monitoring and audio playback. At the top is a touch-sensitive tap-to-mute button that is linked to the RGB light strip that indicates the current status of the microphone.

The DuoCast is constructed of hard plastic and feels sturdy when held in your hand. The included shock mount and desktop stand offer an extra layer of security for the Duocast. Interesting to note here is that there is no threaded hole for mounting the microphone separate from the shock mount. They are essentially one package. As noted previously, an included mount adaptor means you can remove it from the stand and attach it to a boom arm or another stand.

The whole package is clean, functional and takes seconds to set up. I’m quite impressed with the overall look and feel of the microphone.

More Than A Pretty Package

While I’m impressed with the look and feel of the DuoCast, it also offers up some impressive features and functionality. Setup is as simple as plugging it into your device. The Mac and PC had no problem recognizing the microphone. Additionally, if you have headphones plugged into the monitoring jack, they will pull double duty and also work to pass the system audio through as well. 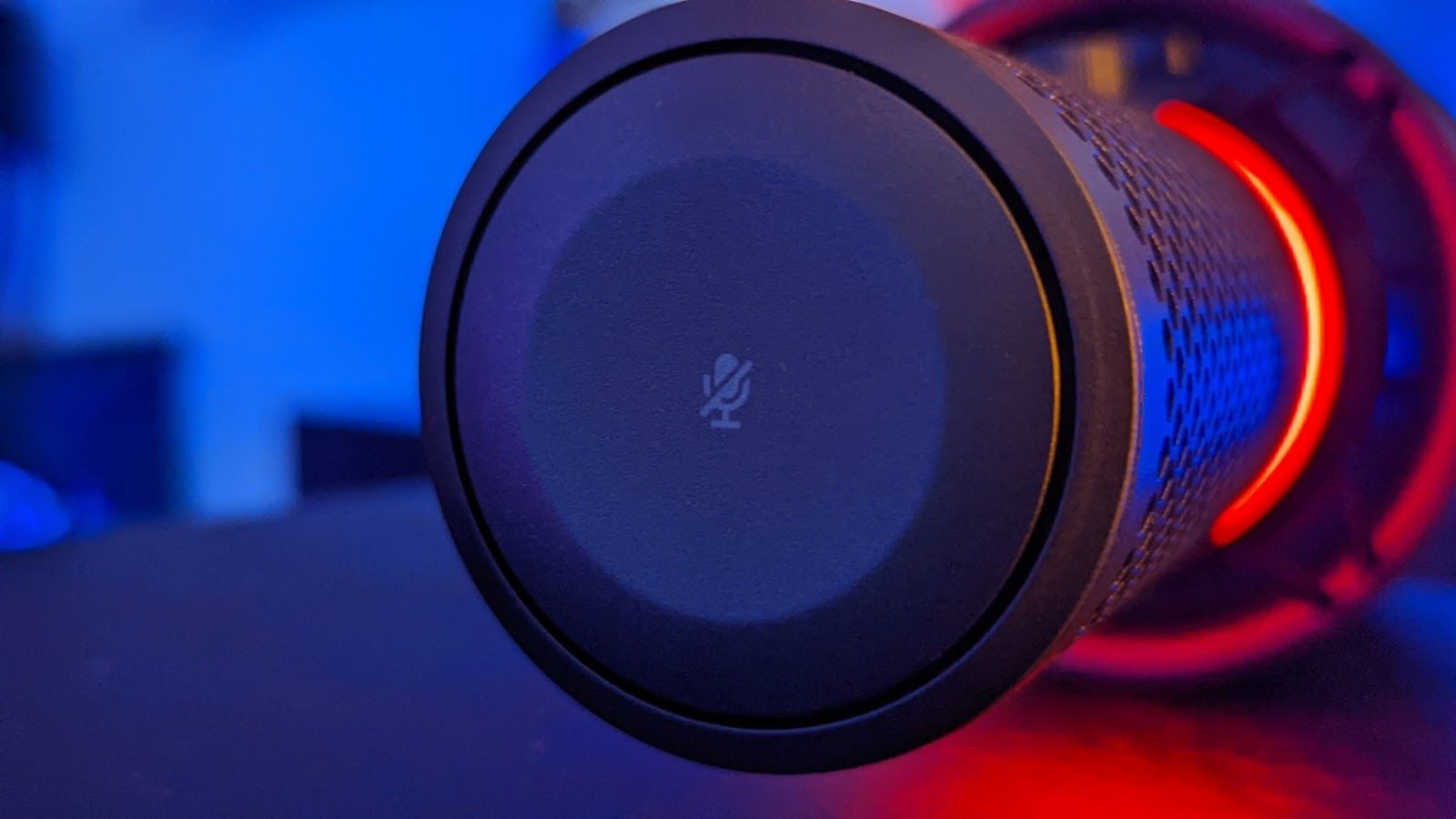 This worked the exact same way when using the PS4. In fact, in the case of the PS4, there was no additional setup required. The HyperX DuoCast took over the work of the audio without hesitation. The whole process is simple and easy to set up.

Interestingly there is no direct monitoring volume control on the microphone itself. If you are on the PC you can use either the system settings to adjust the volume or HyperX’s NGENUITY software suite (More on this later). Mac requires you to control it from the system volume controls while the PS4 is managed from the audio devices menu. Alternatively, if you are using headphones with built-in volume control then you can bypass all of this and simply control it all from there. Needless to say, it's a slick feature that provides an all-in-one device to handle your audio input and output.

The DuoCast also comes with two polar pattern profiles for you to swap between. The first, Cardioid, is a focused front capture profile that isolates and captures the audio from a single user. This is best for streaming, podcasting, voice-over, etc.

The second is Omnidirectional. I was a bit surprised to see this option on a gaming microphone but it's something that is greatly appreciated. As the name suggests, when in omnidirectional mode, the microphone will actually capture sound from all directions. This essentially turns what would otherwise be a single-use device into an all-purpose audio capture. Great for multi-person podcasting or even a conference call, this profile opens up multiple use options for the DuoCast. 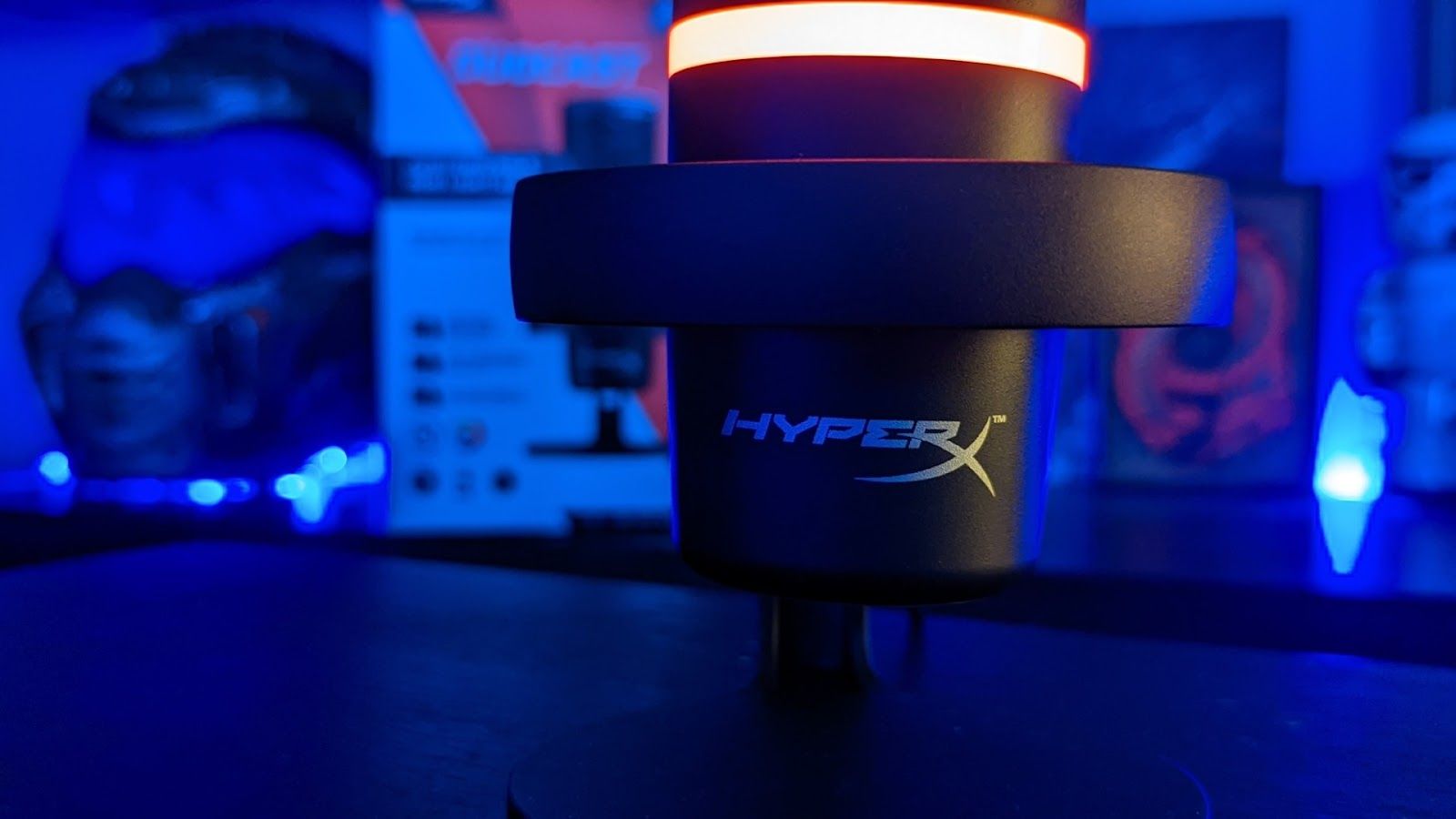 All of this is controlled from the gain control knob that, when pressed, doubles as the profile switcher. This brings me to the last feature of note, the RGB strip that wraps around the microphone. At first glance, I assumed it was just a fun piece of lighting to accent the beautiful design. While that is true there is so much more going on.

The RGB light is also used as an indicator for all of the functions mentioned above. When you adjust mic gain the light temporarily changes color to indicate how much gain you have added or taken away. When switching between polar profiles, the RGB light will temporarily display a light pattern that coincides with the polar pattern being selected. When the tap-to-mute button is touched at the top of the microphone, the RGB light goes dark to indicate that it is muted. It's a smart use of the RGB strip and speaks to the whole design of the DuoCast; Smart, simple and functional.

NGENUITY is divided into two basic sections; Audio and Lights. The audio portion of the software offers a clean and exceptionally functional interface to modify every aspect of the microphone’s capturing capability. Mic gain, mute, volume output, monitoring, polar pattern and even filters like high pass, limiters and gates can all be managed from here. It should be noted that in the version of the software I was using filters and EQ hadn’t been implemented yet, however it looks like they should be available at launch. 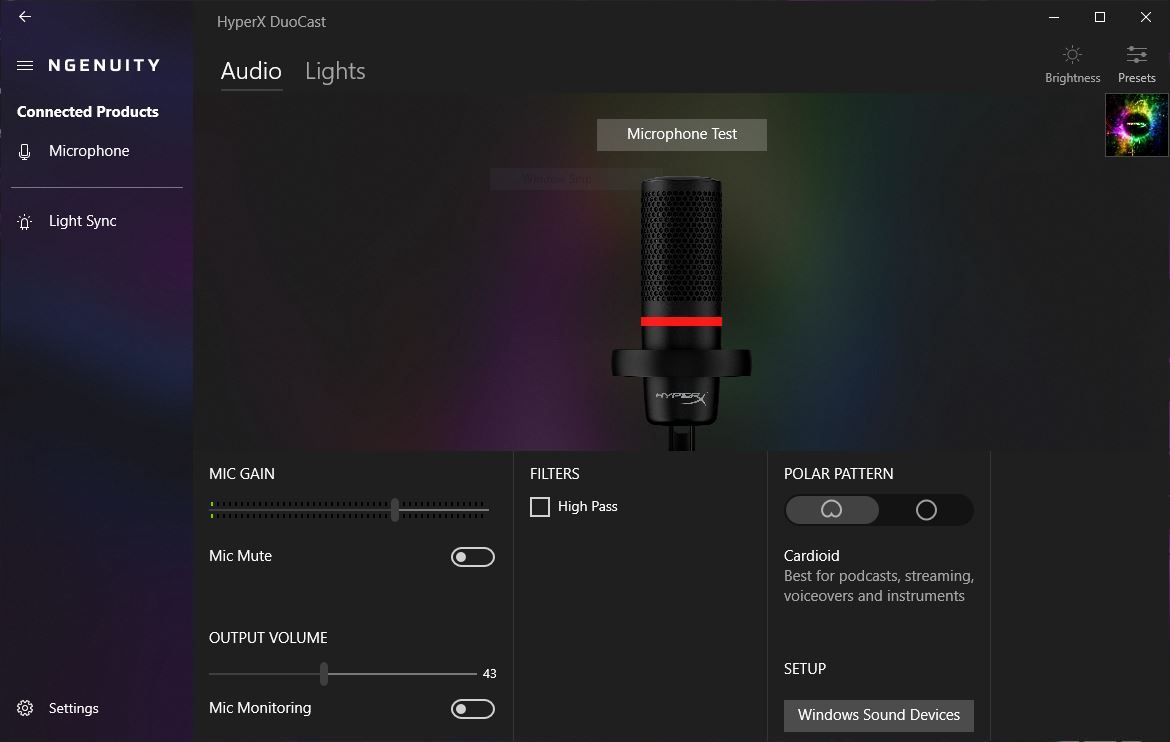 Jumping over to the Lights portion of the software, you’ll find everything you need to customize the RGB light strip. There are a host of effects and colors to work available. It is also possible to target parts of the light strip allowing you to create a unique lighting pattern that fits your setting. Additionally, you can create presets for the audio and lighting. This allows you to cater the whole experience to what you are doing at the moment.

The software is simple to understand, easy to use and powerful to control. The best part of this is that any settings you adjust can be saved directly to the microphone. This makes jumping from device to device convenient and consistent in sound capture. At the time of writing the software was available on PC only.

How It All Works

The DuoCast is an impressive piece of technology when it comes to design, construction and features offered. At the end of the day, however, the real question is just how well does it capture audio? It's a great question and one we need to answer.

I’ve long been a fan of dynamic mics for stream and comms but have, in more recent days, started to come around to the idea of leveraging condenser microphones for gaming. The HyperX DuoCast is designed using two electret condenser capsules at its core. For those new to condenser mics or even electret capsules, let me explain.

Condenser mics rely on a pair of metal plates, one stationary and one moveable. When soundwaves hit the diaphragm (the moveable one) the distance between that and the backplate (the stationary one) changes. This process creates a science thing called capacitance. This then is translated to audio that is captured through the condenser microphone. What makes the condenser microphone so great is that it can capture a lot of sounds easily.

For this whole process to work, however, a lot of power is needed. In the case of traditional condenser mics, we rely on an electrical current to keep the plates charged. It’s also known as phantom power(48 volts). However, in order to get all that power into a USB-powered Condenser microphone, companies use another method for polarizing the plates. A substance called ‘electret; is applied to the plates which essentially puts them in a permanent state of polarization. It allows for the development of smaller plates, is less expensive to construct and requires much less power to use. 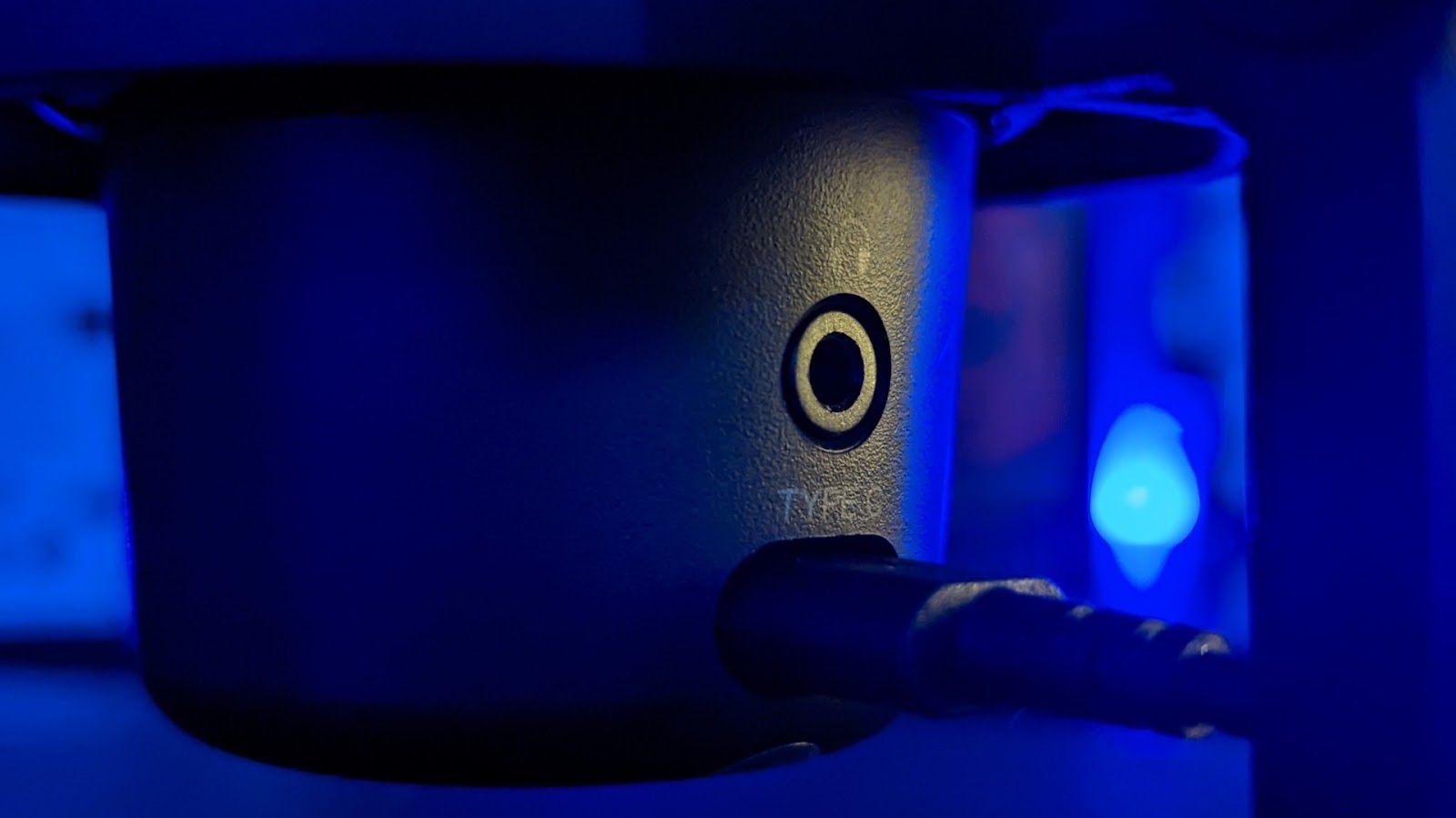 Until just a couple of years, traditional condenser mics were considered far superior because polarization didn’t rely on electret that had historically not held up as well as a powered system. However, some serious advances have been made in recent years that have helped boost the popularity and reliability of electret in condenser mics.

In my real-world tests with the DuoCast, I was impressed with just how well the capsules captured my voice-over audio. The built-in pop filter did help with some of the edges in my own voice creating a clean sound. In the sample below you’ll note that there is a slight hollowness to the audio capture. This audio was recorded in my office without any special studio equipment to dampen the sound.

The audio capture sounds clean and clear. I did note though that the recording lacks some of the warmth I like to hear. As a result, the audio doesn’t sound as full as I would expect. Overall, though, the audio capture is clean and clear which would work fairly well in a gaming or streaming setting. It should be noted that the recording was captured with computer fans running in the background running. With the right gain settings the mic does alright with isolating vocals from background noise but some of my other testings showed that it does struggle a bit when there is more noise in the room.

For real-world use, I could definitely use this for a stream or for communication while gaming or on a conference call. With how easy it is to set up, the host of features it offers and its overall sound quality, it really does allow me to adapt it to a lot of settings. I would be hesitant, however, to use it for podcasting or recording instruments unless I had an environment conducive to studio recording. 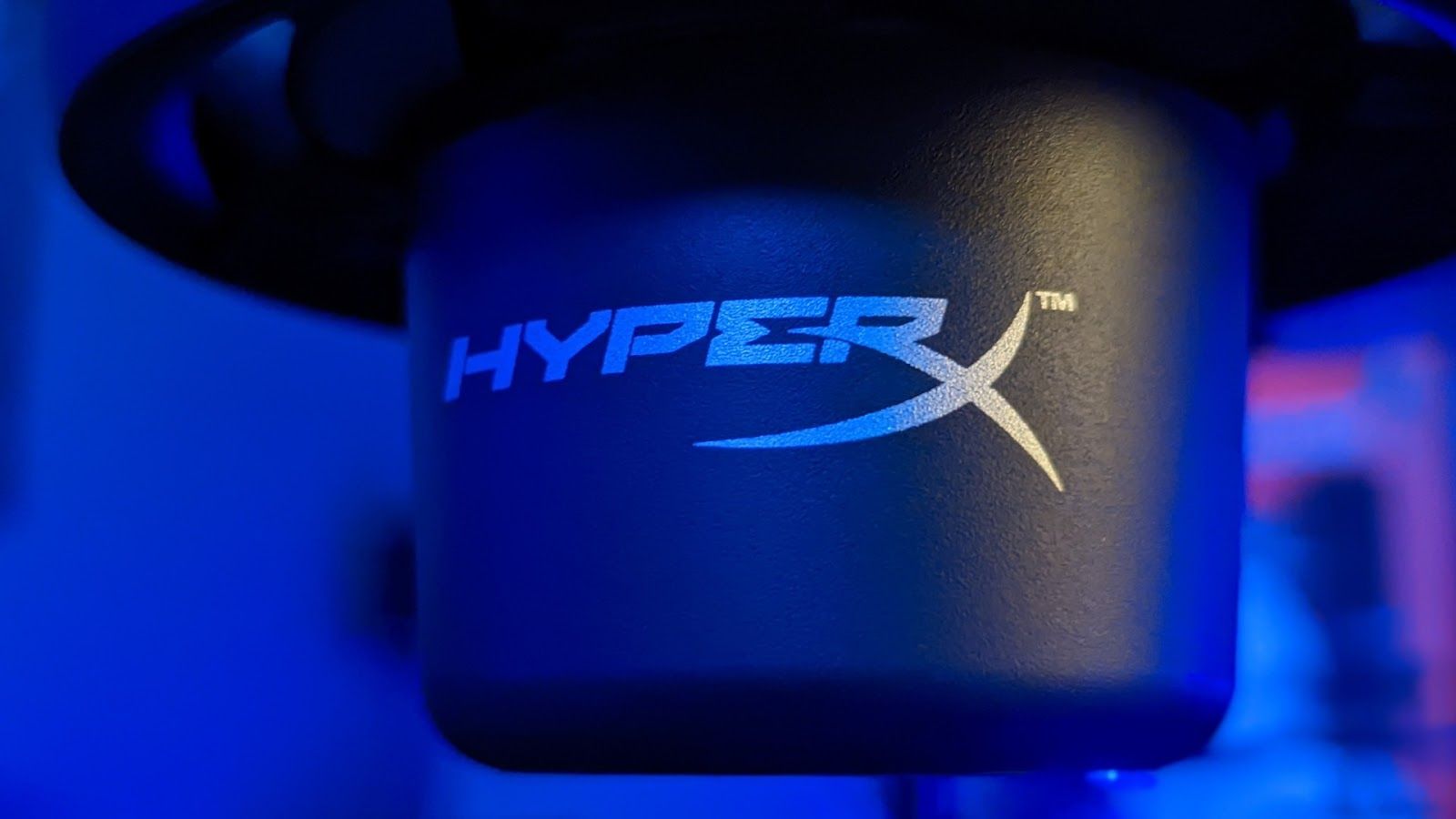 The HyperX DuoCast is a solid offering. Its feature set, build quality and shire flexibility makes it the ideal accessory for gamers and streamers that find themself in need of a good microphone. Though it does struggle a bit with isolating vocals from the background and lacks a bit of the warmth I like in a microphone, the overall quality of its capture still makes it a great option, especially for budget-conscious streamers. Priced at $99.99USD, the HyperX DuoCast is a great microphone for gaming.