The newest headset from HyperX is here, and it’s the HyperX Cloud Flight S, a wireless headset designed for PC and PS4 players. This is an improved version of the Cloud Flight headset and offers 7.1 virtual surround sound and Qi wireless charging. But how does this new and improved version stack up and is it worth the $159.99 asking price? Let’s break it down and see! 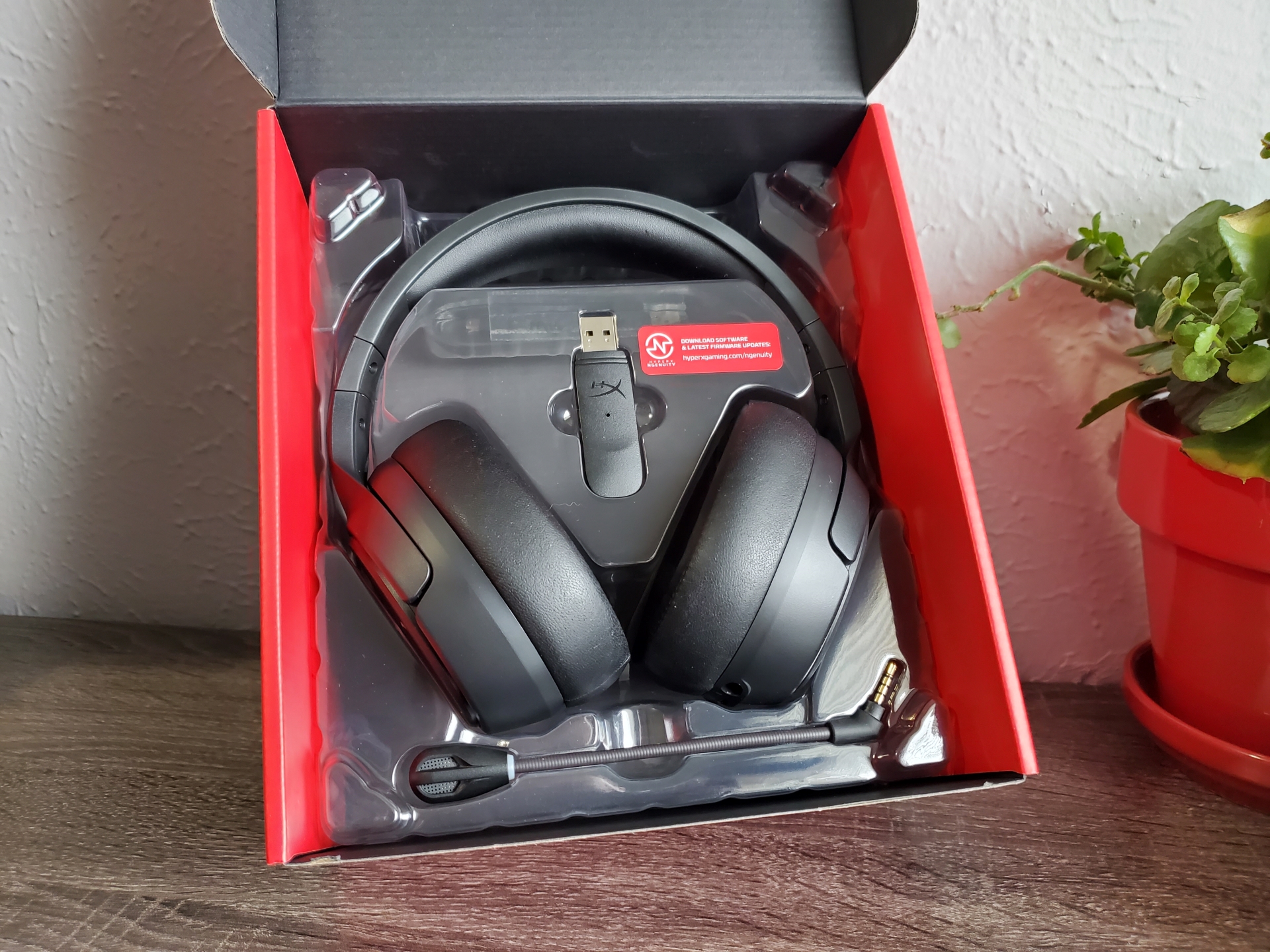 What’s in the Box!? And Usage Impressions

The HyperX Cloud Flight S comes in a very minimalistic red and white box, with simplicity being key. The packaging inside is also very minimalist with little waste and even less wasted space, which I appreciate. There’s not a lot of cables, in fact there’s only the one USB micro charging cable and the USB dongle included, aside from the headset and detachable mic. Compared to some of my other wireless headsets - which come with wires galore, charging stations, audio DACs, and etc – the Cloud Flight S headset offers a very clean presentation.

Hooking up the headset couldn’t be easier – I just plugged in the USB dongle, turned on the headset, and I was good to go. Initially, the headset seemed tight on my head like it clamped down or was designed for smaller craniums. But as I gamed with it on, I never noticed it ever hurting or feeling to tight. The headset felt perfectly snug, and I didn’t have to re-adjust the band or angle it a different way to get comfortable.

Controls on the headset are easy to change while in use as well. The volume control on the right cup adjusted my PC’s overall volume, and the 7.1 surround sound button on the left cup is noticeably raised so as to not confuse it with the power button. If it wasn’t for reading the instruction booklet that came in the box, I would have also never realized that the left cup also has 4 customizable buttons on the outside as well. By default, the bottom button was the mic mute, the two side buttons adjusted game and chat volumes, and the top button toggles mic monitoring.

The wireless 2.4 GHz signal can go up to 20 meters with no impedance, and I had no trouble walking around my house and still listening to my game. I was able to get up and go to the kitchen to pour myself more coffee while never breaking conversation with my friends, and I could get up to go to the bathroom in the middle of playing PS4 to listen for a dungeon notification while I played Final Fantasy XIV. I only lost sound when I went to the extreme corners of my home. 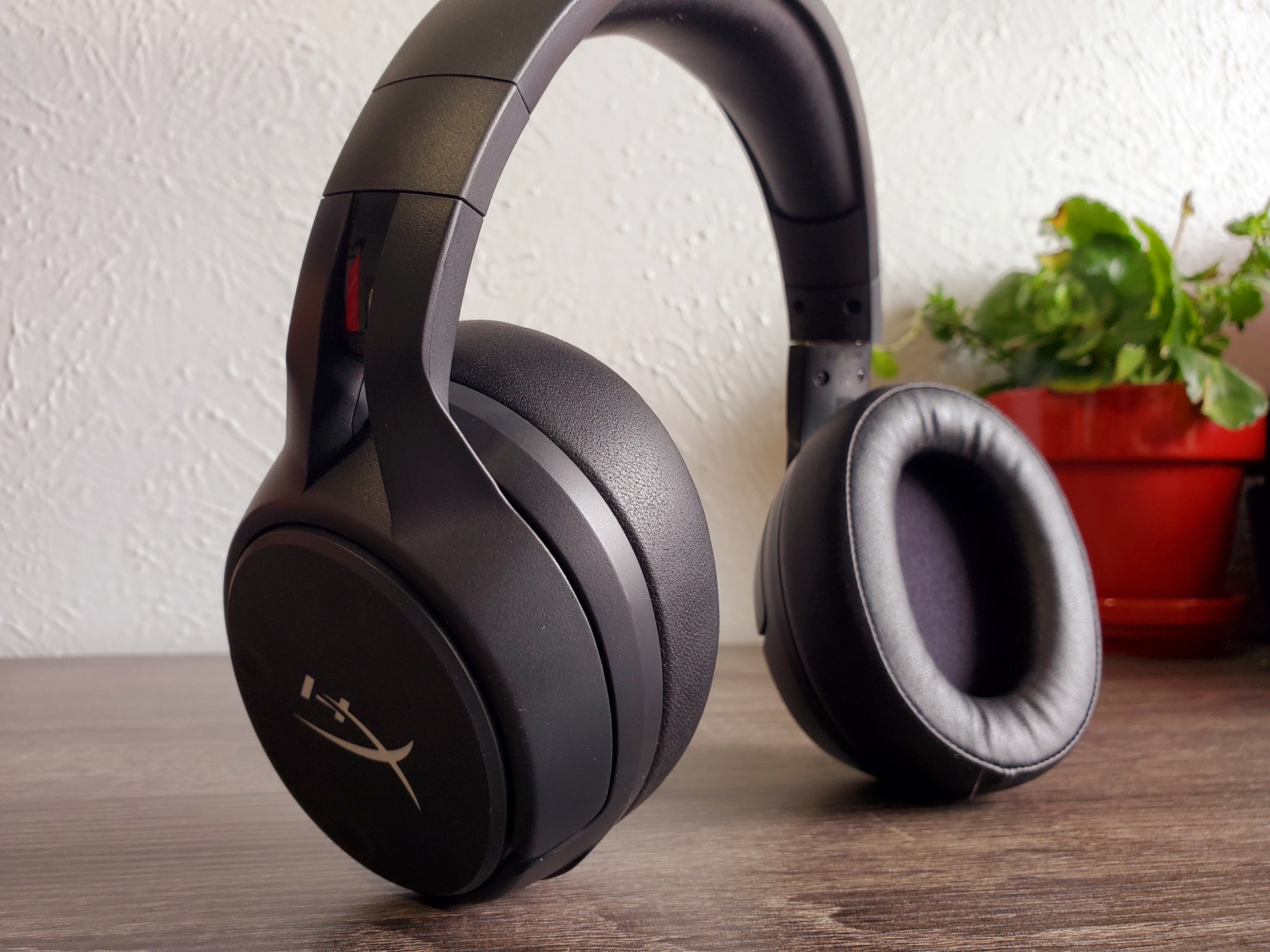 Besides the 7.1 Virtual Surround Sound and the Qi Wireless Charging features, the new HyperX Cloud Flight S headsets has a few minor tweaks and changes over its previous iteration. Most notably, the designed aesthetic on the new Cloud Flight S is a lot more nuanced and downplayed. The headset is almost completely black, with only the white HyperX logo on the side to break up the monotone color. Compared to the previous Flights, which had red LED logos on the side and an exposed red wire coming out of both ear cups, the new Cloud Flight S seem less “gamer-y” and more like a professional set of audio cans.

Another difference is that the Cloud Flight S has done away with the analog jack on the headset. So unfortunately, you cannot wire this headset to the PS4 controller if the headset battery dies, nor to an Xbox One, Nintendo Switch, or a phone for wired support. This headset is exclusively PS4 and PC only, which is a little disappointing if you’re a multi-console gamer like I am.

Thankfully, the same level of comfort carried over that HyperX is always so good at. The cups are still memory foam and have a comfortable leatherette finish over them, but the design is slightly different. The cups no longer look spread out like they’ve been smooshed, but instead look more precisely fitted and contoured for a clean aesthetic. The band also retains the same level of comfort, but the adjustable slider is plastic this time around instead of steel so the headset feels lighter but is not as durable.

I played the HyperX Cloud Flight S on both my PS4 Pro and PC through an eclectic range of games, from Fortnite and Destiny 2 to Yakuza 5 and Wolcen: Lords of Mayhem. The game audio sounded fantastic, and I never experienced any popping noises or distortion. With the frequency response between 10Hz and 22kHz, the speakers themselves are above the average that most headsets lie in, which is between 20Hz and 20kHz.

Using the 7.1 virtual surround sound made a big difference when playing shooters where I needed situational awareness, but I did sometimes have difficulty pin-pointing precise directions for certain sounds like footsteps. Sometimes, it would just sound like a big echo and I wasn’t able to determine if it was coming from my right or my left. The virtual 7.1 isn’t as precise as something like Dolby Atmos, but it is markedly better than regular-old stereo sound. 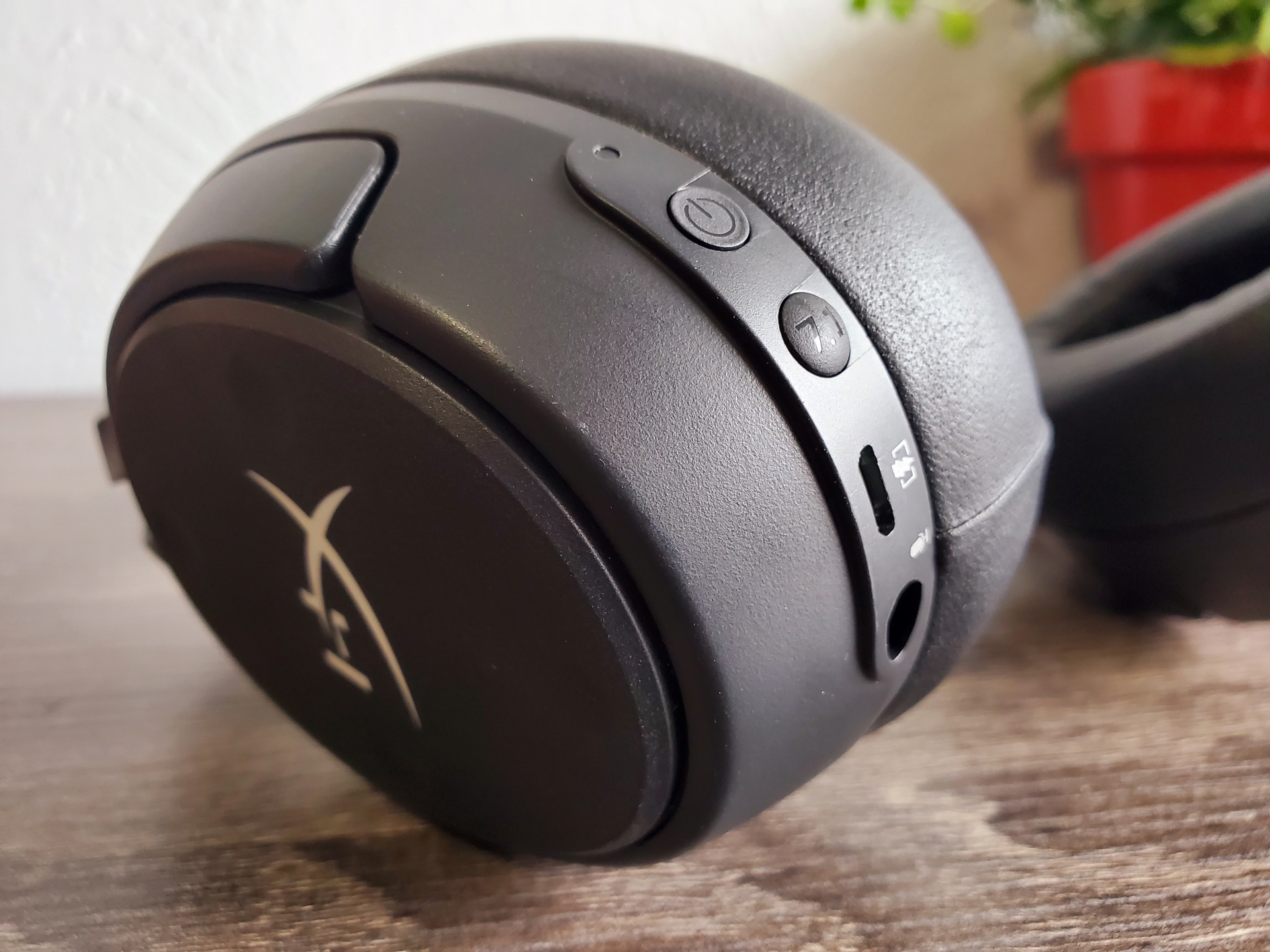 Although the HyperX Cloud Flight S isn’t designed for listening to music, they are perfectly up to the task. Again, I listened to an eclectic range in order to gauge the different highs and lows that the speakers produce. From heavy metal like Opeth’s Deliverance album, to the silky notes that Yo-Yo Ma plays on cello, music comes across crisp and clean. Again, I didn’t hear any distortion in the music I listened to unless I switched in to the 7.1 surround sound.The virtual surround sound doesn’t lend itself well to listening to music, on any device, since most music is recorded in stereo channels anyways. The virtual surround sound makes the music sound echoey and overly-loud, losing the balance between the different instruments and vocals. So, listening to your favorite playlist in the background on Spotify may pair well when you’re playing a game with the 7.1 virtual surround sound turned on. 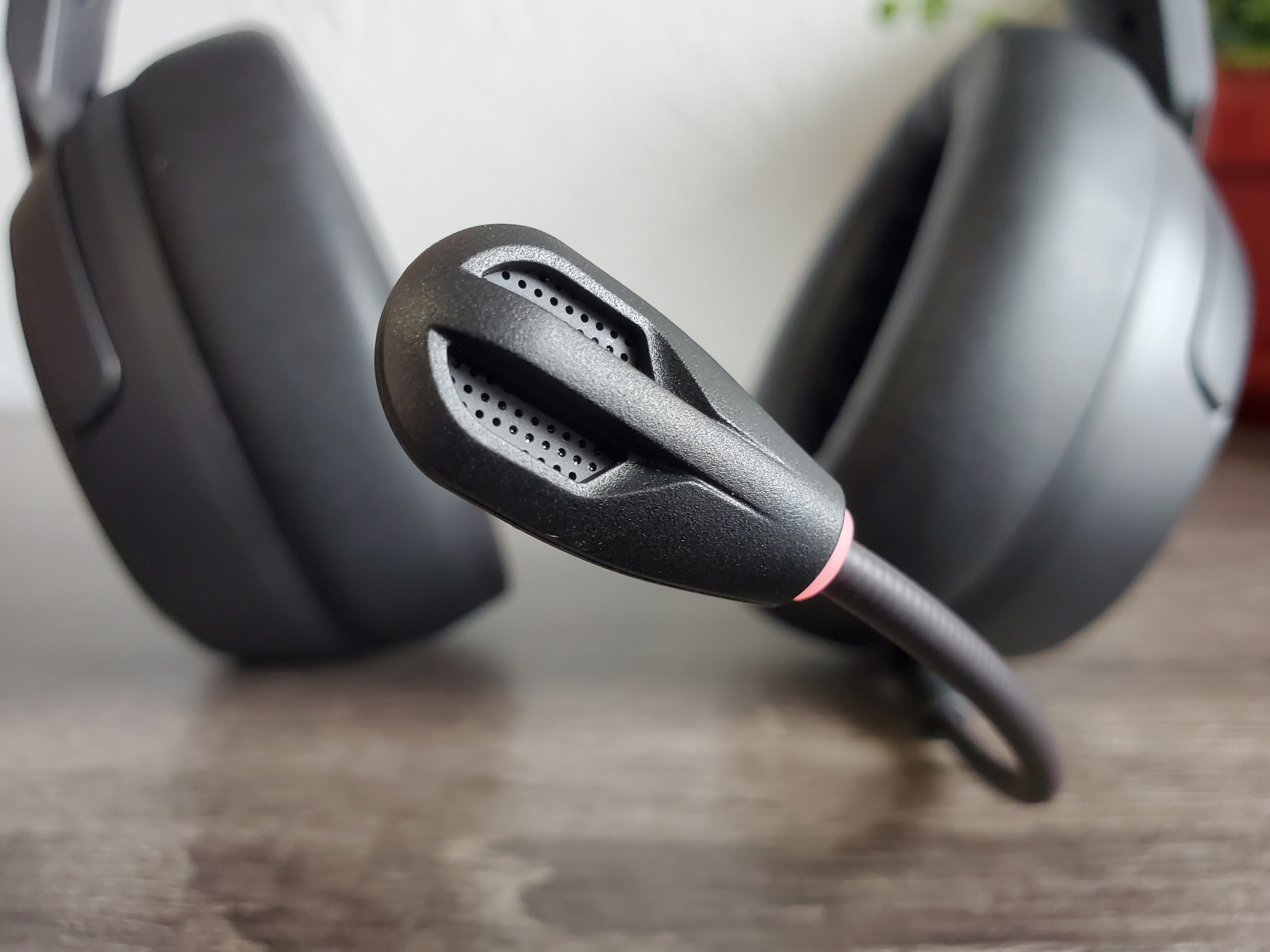 Whereas the HyperX Cloud Flight S has excellent sound quality, the microphone is nothing particularly exciting. I didn’t have any issues with friends hearing me on the mic, but I wouldn’t exactly try and record a podcast with it. Which is a shame, because the frequency response of 50Hz to 18kHz for the microphone looks like it should offer close to what a condenser mic does. Most mics on the headsets I have only offer about half that range, typically around 100Hz to 7kHz, which is also what the previous Cloud Flight headset used as well.

The position of the mic also isn’t something I like, because it seems too short. I prefer my mics directly in front of my mouth, but the Cloud Flight S’s mic only comes up against the very corner of my mouth. Since there’s no filter to reduce pops from stop-plosive consonant sounds, I’m sure that this was a conscious design decision. But because of this short length, I feel like it takes away from something I really like on the microphone: the LED mic mute light.

I don’t have any other headset that offers this nifty feature directly on the mic itself. By having a notification light, I am able to quickly and easily discern when I’ve muted myself or not. Or at least, I would be able to if the mic’s cable was long enough. I can’t see the light in my peripheral regularly, so I have to angle the mic slightly above the corner of my mouth and strain my eyes to look down at it when I need to check.

Regardless, this is one of my new favorite features in a headset and ought to be incorporated by every manufacturer into every headset going forward. I can’t even tell you how many times I have muted myself to talk to my wife for a sec, only to forget afterwards and carry on for almost an entire hour before realizing. For games that require ample communication, like Division 2 and Rainbow Six Siege, this has caused me to lose more times than I care to admit. I’m happy that HyperX came up with a solution to this problem, so maybe now I’ll stop having hour-long conversations with myself.

Just like every other manufacturer out there, HyperX has also developed an app to utilize for use with their products and the Cloud Flight S is one of the supported headsets. I struggled for a bit with the app at first though because I tried to use the charging cable to plug in my headset, when I actually just needed to focus on the dongle instead. When I first started up the app, it had a quick firmware update for the headset and then asked me to unplug and plug back in the headset cable. It took me hours to realize that it was talking about the dongle instead of the headset itself.

The app seems insignificant compared to others I’ve used in the past. Features include monitoring battery life, adjusting mic volume, adjusting game/chat volume, and customizing the four side buttons on the left cup. For some reason, there is no option to adjust the equalizer settings on the headset even though the booklet that came in the box specifically lists that as a feature. So hopefully it will be added in the future, but it was not available at this time.

I find the app to be quite disappointing, and unless they update it in the future to allow for different EQ profiles to be created and adjusted there’s almost no reason to use the app currently. Aside from customizing the four buttons on the side, I don’t plan on using this app regularly. 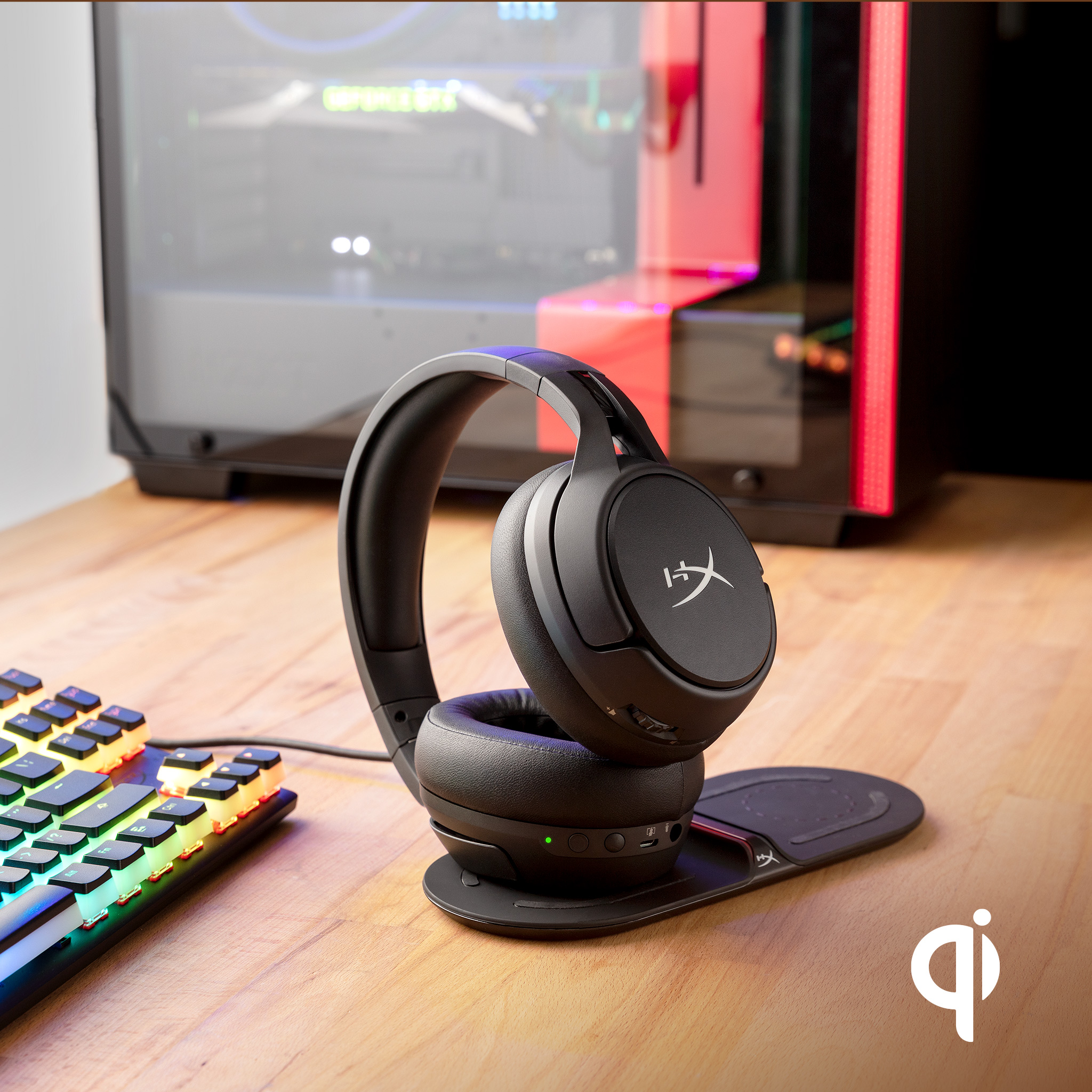 I enjoyed my two weeks with the HyperX Cloud Flight S headsets, but I could have absolutely loved them if they offered just a bit more in terms of features. The lack of EQ customization really gets to me, and I hope that this feature gets added eventually. Likewise, I was sad that I couldn’t use a wire to plug into the Switch or Xbox One when I wanted to. But for strictly PC or PS4 playing, this headset is an absolute dream. The battery life was more than enough for me to play with, and I only had to charge it once when it was completely drained. I couldn’t test the Qi wireless charging feature since I don’t have one, but this is the first headset I’ve seen that even offers that technology.

For a wireless headset, the $159.99 price tag is relatively inexpensive, and the HyperX Cloud Flight S offers a lot in terms of sound quality and usability. There may be better wireless headsets that offer different features, but those are typically a lot more expensive as well. I think for either PS4 or PC gamers that prioritize wireless and don’t want to break the bank, the HyperX Cloud Flight S headset should be at the top of their list.