HyperX has been in the gaming scene for years, and keeps pushing the envelope when it comes to their gaming accessory product lineup. Their range includes budget-conscious choices like the Cloud Stinger headset ($34.99), to mid-range offerings such as the Alloy Elite II keyboard ($129.99) and the Pulsefire Dart wireless mouse ($99.99), to higher end products like the Cloud Orbit S headset ($329.99). Never satisfied, HyperX also likes to revisit their classic products and enhance them by making small upgrades over the years to keep them competitive, such as this year’s version of their Cloud Core headset upgrading to DTS spatial audio from virtual 7.1.

Enter the new HyperX Cloud Alpha Wireless headset, with HyperX’s claim of up to 300 hours of battery life. This is a wireless version of their already excellent Cloud Alpha that launched back in 2017, while also seeing improvements that they made on the Cloud Alpha S headset from 2019 as well. Coming in with an MSRP of $199.99, this is a mid-priced headset that is competing against the Sennheiser HD 450BT, Razer Opus, and SteelSeries Arctis 9. So how does it stack up against the competition? Here’s our review of the HyperX Cloud Alpha Wireless headset.

The Cloud Alpha Wireless features DTS Headphone:X spatial audio, an improvement on the virtual 7.1 available before, and trades the wired connection for a USB dongle that keeps audio latency virtually lag-free. It retains HyperX’s excellent design for dual-chamber drivers, which separates the bass from the mids and highs so as to keep them distinguishable, and features leatherette-padded cups with memory foam insulation for comfort while you listen. According to HyperX, the 3.7V 1500mAh li-on battery can last for up to 300 hours on a single charge and charges via a USB-C port on the left cup. 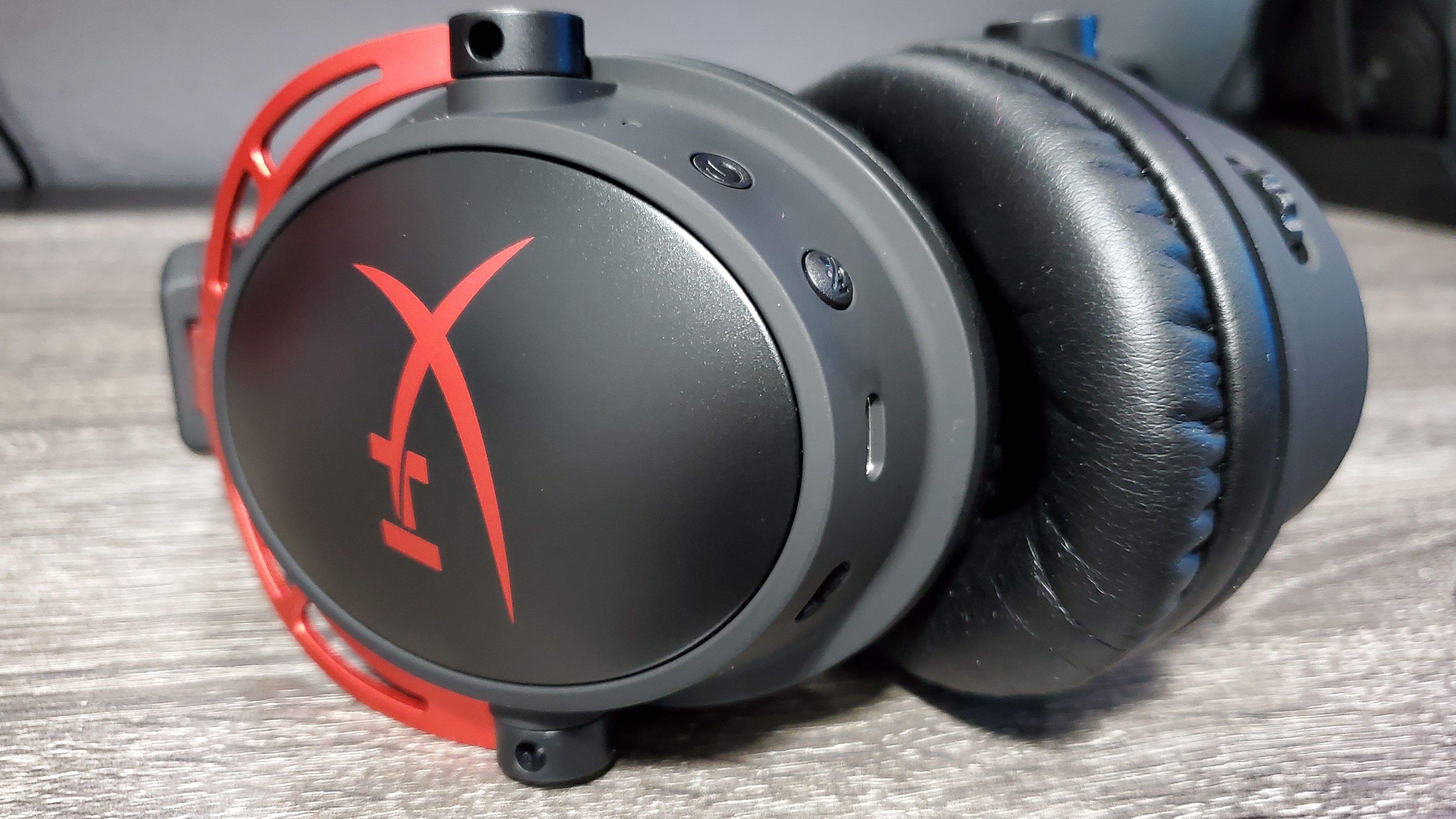 What's In The Box

The packaging for the HyperX Cloud Alpha Wireless is basic and practical, with red and white coloring and marketing beats on the box that calls out the battery life in big bold lettering, as well as the memory foam cups, dual-chamber drivers, and DTS:X Spatial Audio features. Inside is plain plastic packaging housing the headset, charging cable, detachable mic, and USB dongle. Separate is the quick start guide that shows how to sync to either PC or PlayStation consoles, and a small little thank you card that says congrats on joining the HyperX family. There is a note on the underside of the packaging stating that the battery life was tested at 50% volume, and that it does vary based on volume and usage.

The headset itself features a black leatherette band with red stitching, and matte black cups held by red metallic arms and a singular braided cable going from each cup to the band. The HyperX logo stands out emblazoned in red lettering on each of the black cups, reminding everyone nearby that this is the headset of a gamer. The detachable mic has a port on the left cup to plugin, and an optional pop filter can slide over the mic giving it a huge presence, making me feel like I was a sportscaster or announcer. There is a red LED light where the actual mic meets the bendable extension from the headset, which turns red to signal when it is on Mute. The left cup also features the charging port, mic mute button, and power button whereas the right cup only has a grooved wheel for controlling the volume. 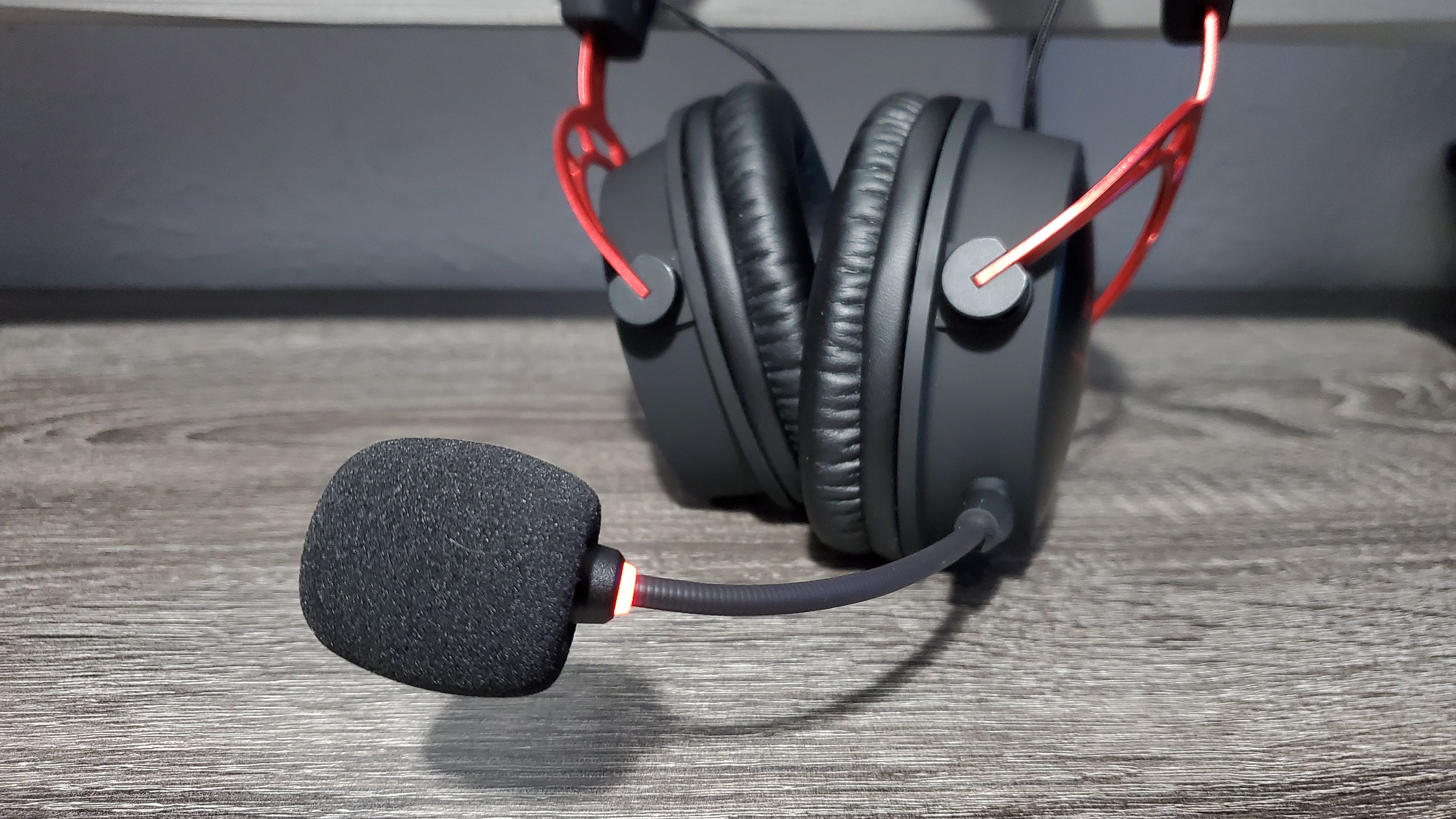 Setting Up and Setting Out

The USB dongle is easy to plug in and play and should work instantly depending on your OS and system settings. To turn on the headphones, you simply hold down the power button for about three seconds until a suave voice says, “Power On” and tells you the battery level. On my PC, the sound output switched instantly to the headphones so I could start enjoying them immediately. My laptop on the other hand required me to download drivers, which it didn’t prompt for initially. I had to troubleshoot the sound issue before it asked me to update drivers for it real quick and still wouldn’t work until I rebooted it. Afterward, though, the connection was stable and consistent on either one and even when I would switch from one computer to the other and back again. Likewise, connecting to my PlayStation 5 was a simple plug-and-play and didn’t require me to get into the system settings in order to change my sound output.

The Cloud Alpha Wireless headset didn’t come with any charge in the battery, so I did have to wait and charge it before first use which took a little over an hour. Unfortunately, there’s no wired option for these so if/when the battery is ever dead you will have to wait for it to charge back up before using again. Once it was fully charged though, it has been going and going and going. At any point during use, you can quickly tap the power button and it will read out the current estimated battery level and when you’re done for the day you simply hold down the power button again for three seconds until it shuts off. There is also an automatic shutoff feature if you forget to turn it off, which I often forgot to, which will help that battery last even longer.

Unfortunately, I did have an issue with the headsets not reading the correct power level out of the box. It seemed to be stuck at 90% no matter how long I continued to use them, up until I installed the HyperX NGENUITY software that lets you customize and tweak settings on most HyperX products, including RGB settings for mice and keyboards as well as EQ profiles for headsets. This software also provides an exact battery power % so you can keep better track of when you’ll need to charge up. Additional options for the Cloud Alpha Wireless include turning on/off the DTS:X spatial sound and adjusting the volume and microphone levels. 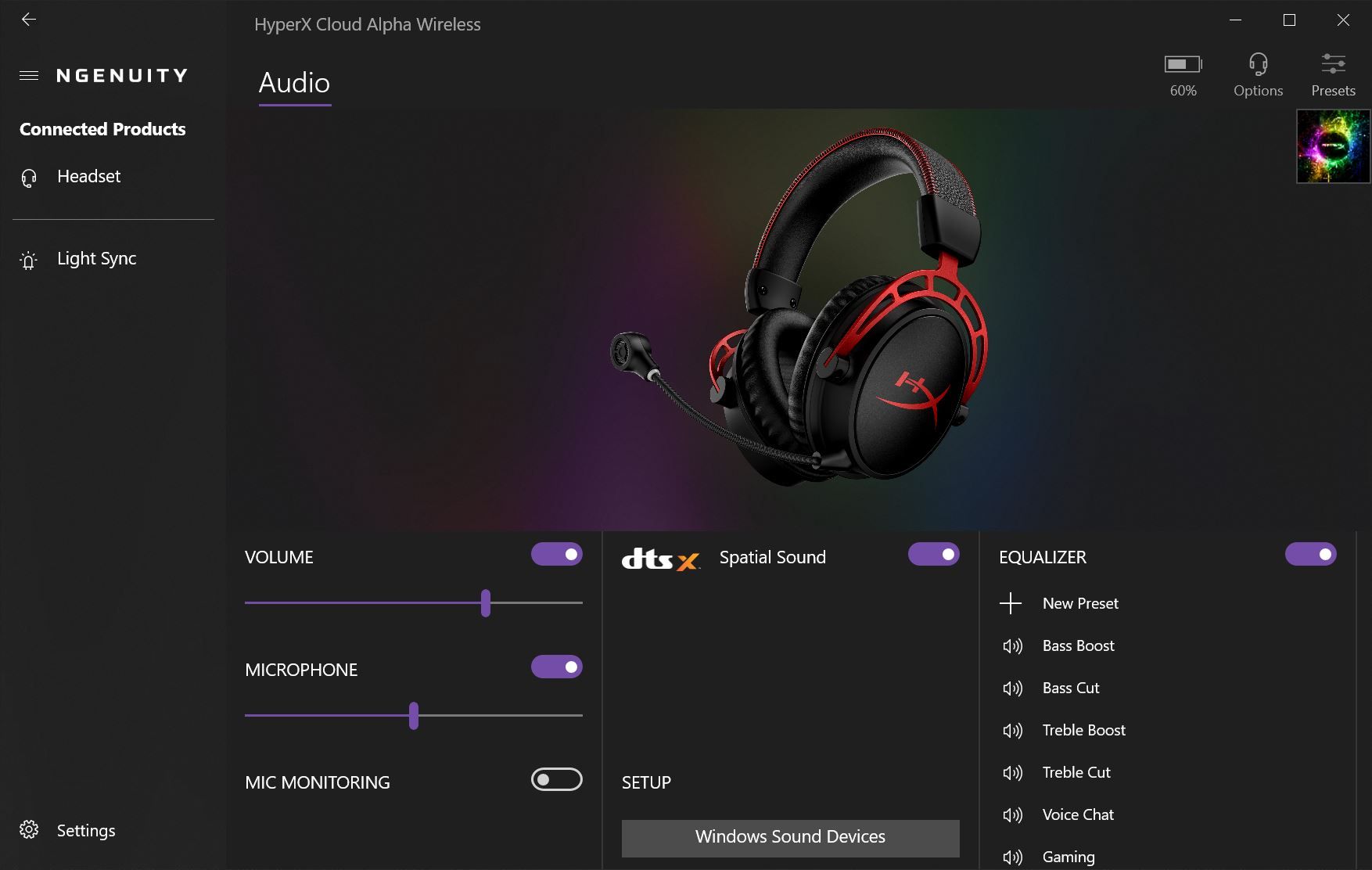 In practice, I had the Cloud Alpha Wireless headset on and in use for at least four hours each day which means I should’ve put close to 60 hours on the headset. As of this time, the battery has only gone down to 72%, which is pretty good. This means I would get just over 200 hours if I continued using it the same way, which blows away competitor headsets like the Sennheiser GSP 370 which boasts a then impressive 100 hours of battery life, but still brings it pretty far from the “up to 300 hours” marketing tagline. In reality, I would still only have to charge this headset once a month and never have any issues otherwise. This still makes the battery life extremely impressive, especially considering the sound quality that comes out of the Cloud Alpha Wireless.

One of the biggest upgrades to HyperX’s lineup of gaming headsets this year is the addition of DTS Headphone:X, or just DTS:X, which includes spatial audio. This is an improvement over regular 5.1 or 7.1 surround sound because spatial audio can relay sounds coming from above or below you, not just around. This is the same kind of technology that Sony was so proud of when the PlayStation 5 console launched, and the HyperX Cloud Alpha Wireless headset now delivers this same immersive sound experience. Any music or games with binaural or 3D audio will add a whole new layer of immersion, and it can be pretty trippy to listen to songs such as Queen’s “Bohemian Rhapsody” that have been remixed to include binaural audio. 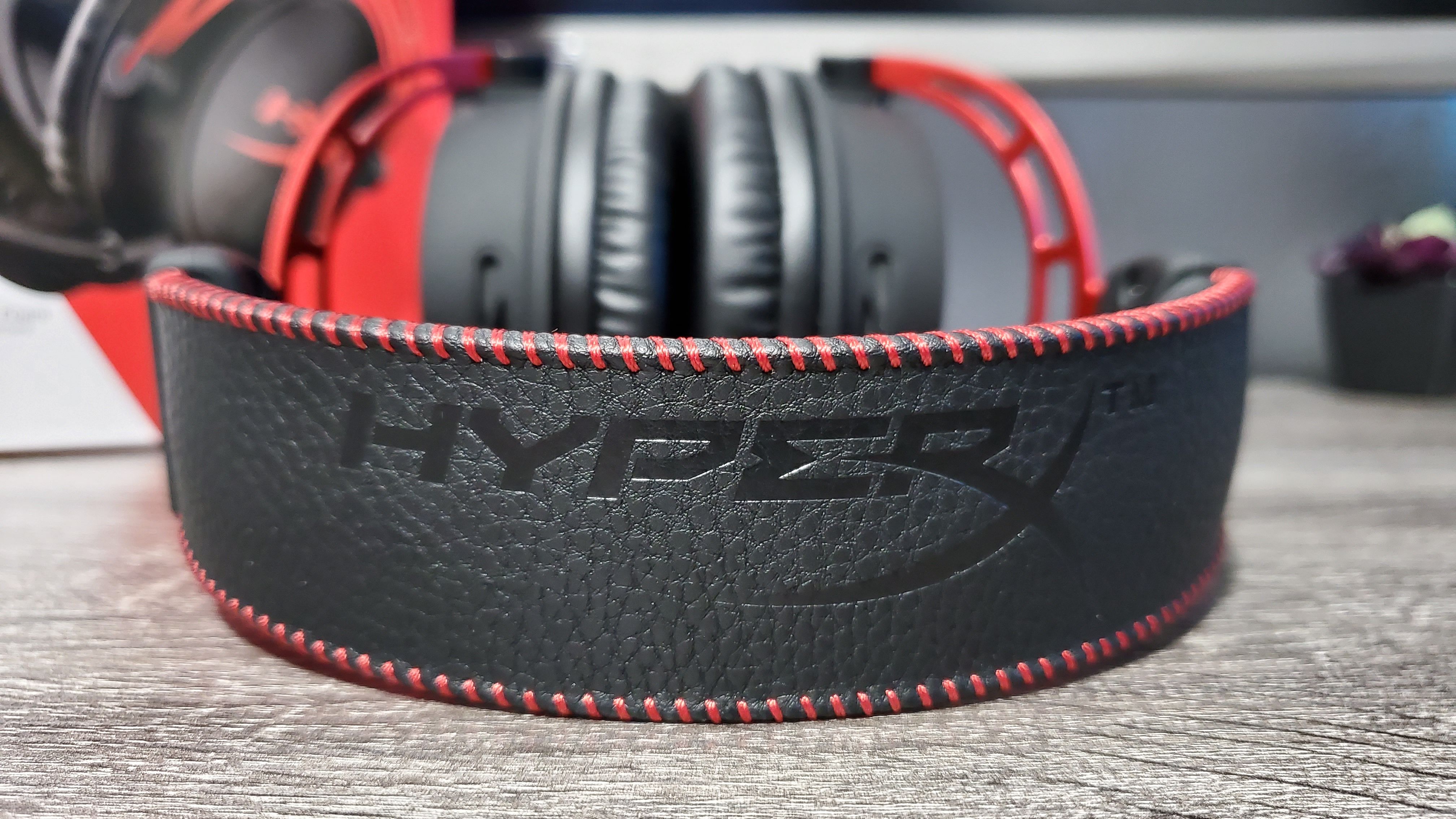 With the Cloud Alpha Wireless’s 50mm dual-chamber drivers, sounds come in crisp and clean with easily discernible bass, mids, and highs in any of the music that I listened to. The bass is impressively present without being invasive of the melody and never had a rattle to it like it was too much for the drivers to handle. Even while listening to bass-intensive music, like hip-hop or techno, the bass never distorted the mids and highs. This held true in all of the games I played including Tiny Tina’s Wonderlands, Elden Ring, and Dying Light 2. Even while raiding in Destiny 2, which often has loud explosions and bass-heavy gun sounds, it never drowned out the rest of the action happening around me - nor, more importantly, the voices of my fellow guardians while on Discord.

It felt extremely comfortable wearing the Cloud Alpha Wireless headsets, and I never got fatigued from the weight or felt like they were pinching my ears. Even with the large li-on battery inside, the Cloud Alpha Wireless is only about 18 grams heavier than its wired counterpart. The cups are very large and ovular so it should fit comfortably over most ear types, and the cups are padded with memory foam and covered in a soft leatherette that is pleasant without getting overly hot. I did have an issue with the arms seemingly adjusting in the band between uses, so I did have to make sure to readjust the arm lengths before putting them on. That small issue aside, the HyperX Cloud Alpha Wireless headset is one of the most comfortable gaming headsets I’ve used.

If you’ve tried any of HyperX’s headsets before and love what you experienced, and are in the market for the longest battery life that you can get, then the new Cloud Alpha Wireless is the absolute best for longevity. Especially if you’re looking for a new headset for the PlayStation 5. But if you’re wanting a wireless gaming headset that offers more versatility and don’t mind the reduced battery life compared to the Cloud Alpha Wireless, then you might want to look elsewhere.