The world of gaming keyboards is busier than ever before. With the rise of eSports and the battle royale genre, even brands like Philips are releasing their own gaming peripherals. If there’s one plus side to the surge of options, it’s that competition is driving keyboards to offer better quality and features for less money. Today, we’re looking at a board that aims to do just that with the Hexgears Gemini Dusk. Available now for $159.99, it offers a solid metal body, doubleshot PBT keycaps, vibrant RGB lighting, and firmware level programmability. Is it the right fit for you?

Editor’s Note: Due to the impact of COVID-19, the keyboard was inaccessible for photography at the time of this review. All product shots have been taken from the official Kono Store webpage.

While Hexgears is likely to be a new brand to many, this isn’t the first time we’ve taken a look at their keyboards. In fact, we’ve gone hands on with nearly every major release they’ve made in the US. In each case, we’ve been impressed at the quality of their boards. Usually, this would be surprising, since new brands often go through growing pains. But that’s the rub: Hexgears isn’t a new brand, they’re just new to the United States. In fact, they’ve been making keyboards and other electronics in the East for many years and accumulating a good amount of acclaim. With the help of partners like the Kono, they’ve researched the competition, found out what gamers want, and are delivering.

To date, the Gemini series (available in Black or White as the Dusk/Dawn) is probably their most anticipated. It was announced way back in 2018. It caught my interest at the time due to its similarity to Input Club’s K-Type, an enthusiast-grade keyboard I very much enjoyed at the start of that year. After finding out more, I wrote a whole article on how it was poised to be one of the most exciting keyboards to watch in 2019.

They didn’t quite make their launch window, but the time has finally come: the Gemini series is here. Is it everything we hoped it would be? 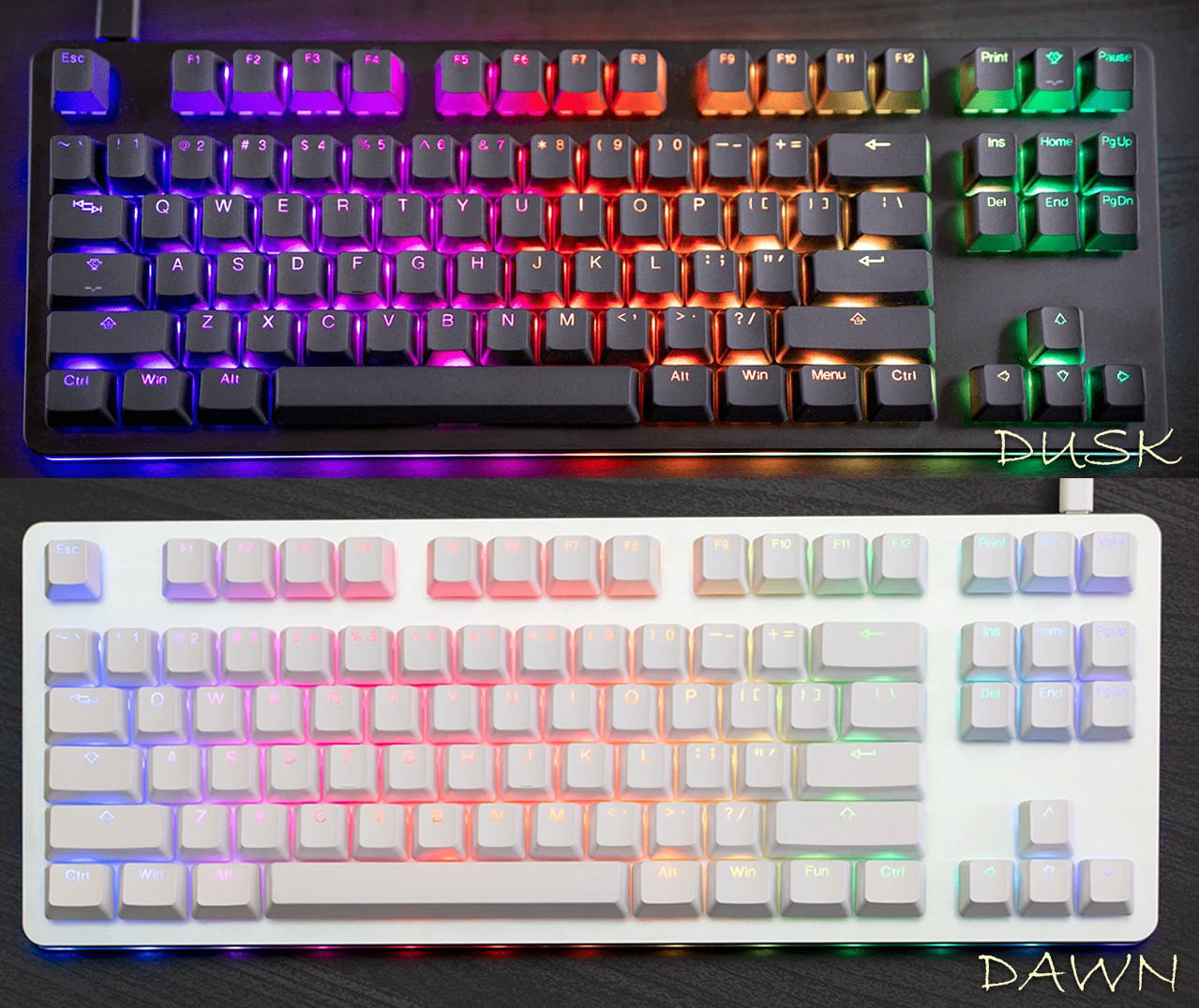 Dusk and Dawn: The Hexgears Gemini Has Arrived

If the Gemini keyboards look familiar, there’s a reason for that. Apart from following the standard layout for tenkeyless keyboards (boards that don’t include a number pad), it’s heavily inspired by Input Club’s K-Type. That, my friends, is a very good thing. The K-Type, if you recall from my original review, was one of the most impressive keyboards I had used all year. It leaned heavily into what keyboard enthusiasts were clamoring for, like high-quality PBT keycaps and hot-swappable switches. In a world filled with “gaming keyboards,” like mine was then, it was a shot in my arm to how good keyboards could be.

Since that time, I’ve had much more experience with high-end keyboards inside and outside of the gaming world. In fact, this review is being written on Input Club’s own Kira. Between my home and office, I have no less than a dozen “enthusiast” mechanical keyboards and close to three dozen “gaming” keyboards I’ve acquired just in the last two years. To say that my perspective has developed would be fair.

The Gemini Dusk — the model I received — is like the K-Type 2.0. It features a metal body, top and bottom, instead of the aluminum top plate found on many premium gaming keyboards. It has a nice heft, weighing in at 2.4 pounds, though it doesn’t feel heavy like a higher profile keyboard might. The board is also free of that annoying “ping” sound that can plague metal-composed keyboards (including the original K-Type) and for that, I couldn’t be more thankful.

The backlighting is also very much improved with better coverage across the board, leading to a brighter, more uniform appearance. It also sees the return of the illuminated ring around the edge of the keyboard, which creates a nice underglow effect. You can swap between some preset colors and effects, and adjust speed and brightness right on board without ever opening software. The ring runs independently of the keys, however, so perfect synchronization may be hard to achieve. 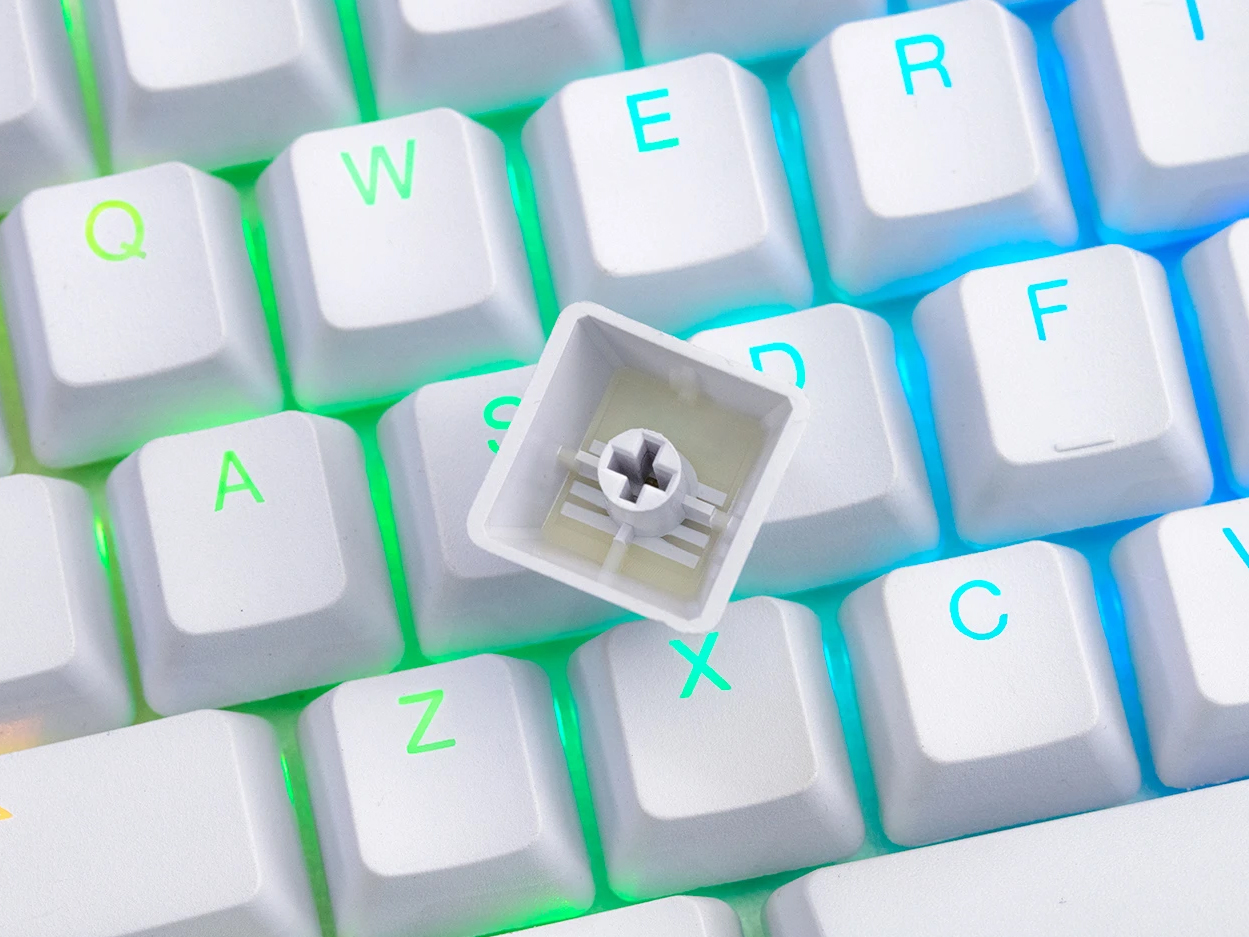 The keycaps are also very good. They’re doubleshot PBT, so the legends will never fade and you’ll be able to avoid the oily sheen that plagues ABS keycaps. The walls are also very thick with an average thickness of 1.5mm. Typing on these keys feels very good. Between the solidity of the keycaps and the density of the metal body (which isn’t specified for type), bottoming out rewards you with a nice, thock sound that I found very pleasing.

Another major selling point for the Gemini series is its use of hot-swap sockets. These allow you to change out switches on the fly to completely change the feel of your keyboard. There are dozens of switches on the market today that are compatible with the Gemini series and nearly all are made to work with cross-stem keycaps. In fact, just last week, I swapped a set of T1 tactile switches into my keyboard at home to make them super tactile and unlike anything you can buy in a pre-made keyboard. The T1s are a specialty switch and cost a bit more, but you can usually swap out an entire set of key switches for $40-70 and make your keyboard feel brand new again. You can order the Gemini with your choice of Kailh Box White, Brown, or Red (clicky, tactile, and linear), but the possibilities are profound. This is honestly one of the best features you can find on a keyboard today and is worth paying extra for.

Around the back, you’ll also find that the Dusk/Dawn has two USB Type-C ports. This allows you to choose which side you’d like to connect to but, alas, does not act as a USB hub. It’s a missed opportunity, to be sure.

On the plus side, the Gemini offers firmware level programmability. Unlike keyboards from HyperX or Corsair, you don’t need to run a software package to access all of your keybinds. Instead, you’ll install Input Club’s driver suite and the Gemini flashing tool. From there, you can remap the entire keyboard and program in dozens of secondary functions, like media controls, lighting keymaps, and more. You can also create custom lighting presets to match the rest of your setup.

From there, you perform a quick key combination to put the keyboard into flash mode, press the button to flash your changes, and the entire way your keyboard knows to function is re-written. That sounds grandiose, but it’s important, because it means that no matter what PC or operating system you use, all of your changes will go with you. If you want a second layout for all of your World of Warcraft macros, you can do that and never have to open the software again. It’s powerful stuff. 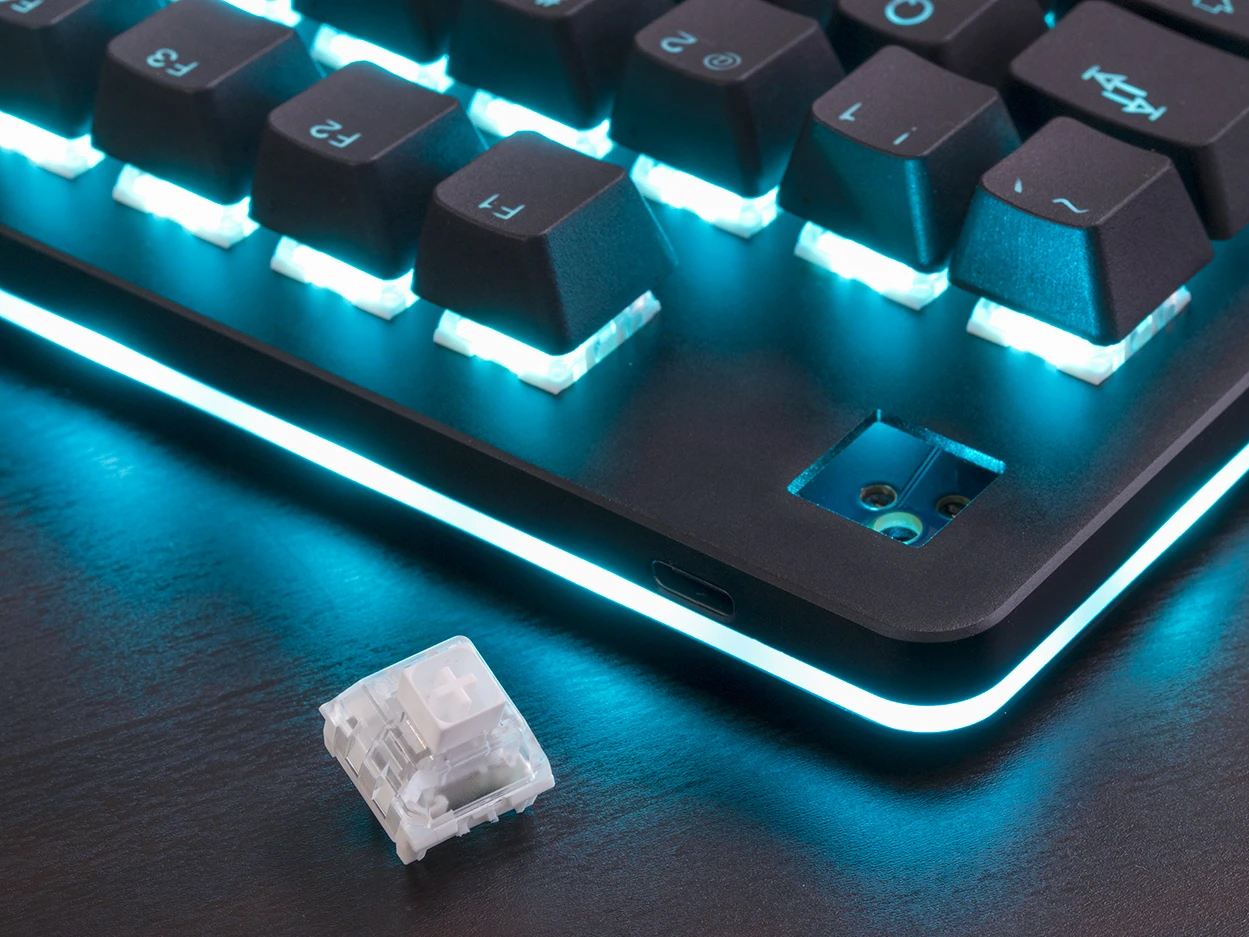 The software is also where things get a little bit hairy. Even though it’s a powerful suite, it’s not the most user friendly. First, Input Club’s driver package throws up a warning flag because it’s not MS certified. Then, once you’re in, it looks very different from what the average gamer will be used to. It also lacks more advanced features software-based keyboards can offer, like timers and sequence macros. There are workarounds for these, like AutoHotKey, but it’s definitely a step removed from what the average gamer will be used to. Likewise, programming in custom lighting schemes is much more challenging than the average gaming software suite.

Likewise, as a keyboard buff, I immediately notice that the stabilizers needed to be lubricated. Yes, yes. I’m a geek. But, with a little extra lube, the stabilized keys sounded much better. Frankly, it’s so much better, it feels close to a custom keyboard. That’s not something I expected, but it really is that good.

The Hexgears Gemini is a great keyboard. It takes everything I loved about the K-Type and either brings it back or improves on it. I wish they’d gone farther to make the software more user friendly, but at the end of the day, it’s hard to argue with a keyboard that feels so nice to type on. At $159, it’s expensive, especially when it doesn’t offer sequence macros right out of the box. Yet, like the K-Type, it’s leaning both into gaming and the enthusiast world. It features the kind of responsiveness, NKRO, and anti-ghosting gamers demand, while also investing heavily in enthusiast features like excellent keycaps, a solid metal body, and open-source firmware programmability. There’s room for improvement here, but this is an undeniably good keyboard no matter which camp you fall in.