In the sea of mobile audio amplifiers, the Bolt and DB12 AAAmp stand out by being extra mobile while not compromising quality. If you like carrying around a hefty brick of an amp there are plenty on the market, but when it comes to truly mobile amps there are few to choose from. So why would you need a mobile amplifier for your phone or tablet? Check out our full review to finally hear what you are missing. 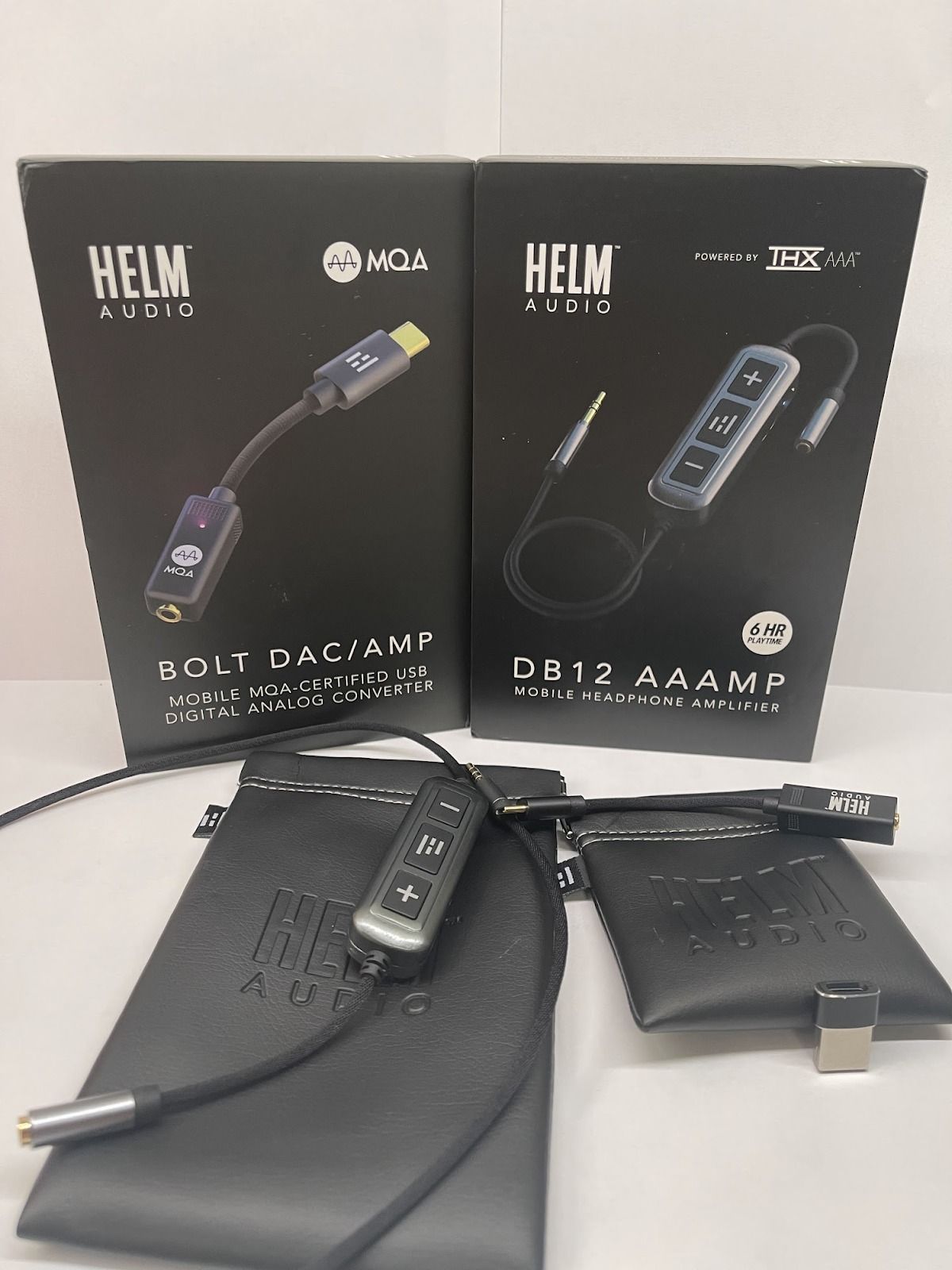 Out of the two products, the Bolt has more caveats to getting the most out of the product. While there is a difference in sound quality when simply listening to Spotify with the Bolt connected, it starts to show its strengths when used with higher-quality streaming services like Amazon, Apple, Tidal or Qobuz. While testing the Bolt I used all 5 music streaming services to get a strong benchmark for the product. The Bolt gives a visual indicator so you know the quality of the stream. Even though Spotify claims to have lossless technology with HD quality, the Bolt only showed blue or SD audio at < or = to 48kHz. Amazon Music, Apple Music, and Qobuz indicated HD audio at >48kHz. Tidal subscription at $20 a month (HiFi Plus) was the only music service tested that used MQA audio. The big question is, was there a difference that could be heard? Definitely! I’m not sure I can go back to Spotify while using the Helm Bolt. While there was not a notable difference between the HD streaming services and Tidal’s MQA premium service, there was a huge difference between SD and HD sound. 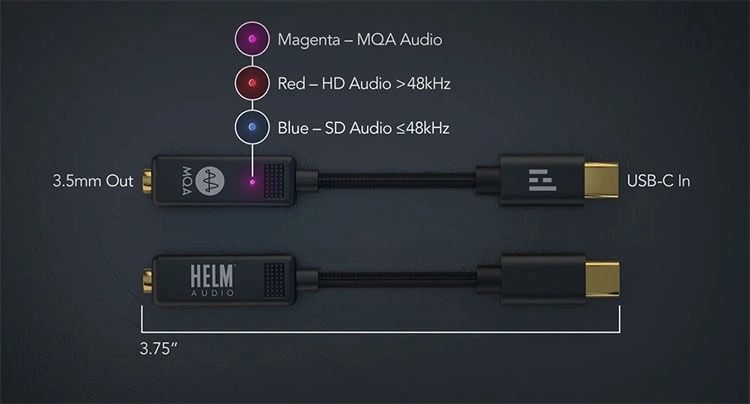 I tested the Bolt using Meze Classic 99 headphones that have a frequency response of 15 Hz to 25 Hz which is in the range of the Bolt, but far from hitting the high end of 20kHz. If I wanted to use the full range that the Bolt had to offer I would need the Meze Elites at a cool $4K. I’m good with my 99’s. For hardware devices, I used a Motorola Android phone, an iPhone, iPad Mini, PC, and a MacBook. Out of all those devices, the iPhone was the least used due to the Lightning connector. I have the correct adaptor to hitch the USB-C to Lightning, but it is bulky and not worth using. In the box, the Helm Bolt came with an extra USB 2.0 connector. I wish they would have dropped the 2.0 and added a small USB-C to Lightning connector. It just makes sense when the product is mobile. I don’t know of a mobile phone that uses USB 2.0 as a connector. The 2.0 is useful for older laptops, but all my devices had USB-C. 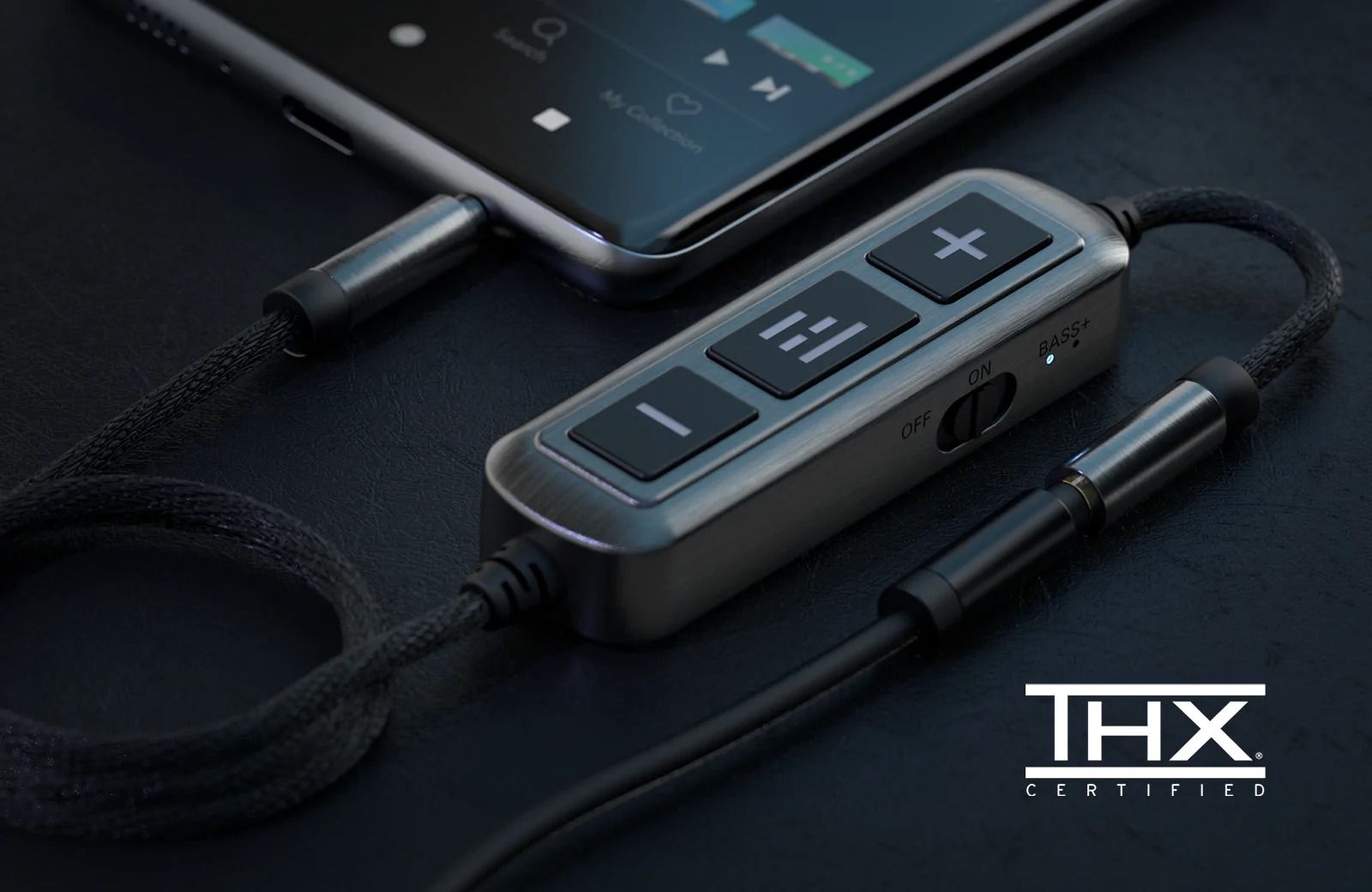 The Bolt’s main draw is the coding to help bring HD or MQA quality music to your ears. The DB12 is the powerhouse that gives you more sound to your ears. It boosts about 12dB and the second you turn it on you can tell. It is almost jarring, so make sure you heed their warning and turn your volume down to at least 50%. I loved the DB12 because it seemed to clear up a lot of the mids and highs while adding some boom, boom, bass. The THX AAA chip is the brains behind the quality of the sound. Even using Spotify I could tell the midrange was clearer and more forward than before. The highs were clear with no scratching or low hiss you normally get when you crank up the volume. Turning on the bass boost put a smile on my face because it was super clean yet it was powerful enough to rattle my brain. I was very shocked that with the bass boost on, the mids and highs were not drowned out. The bass was more of a complementary thump even though it was center stage.

Hooking up the DB12 to any device was simple, even the iPhone. I switched out my bulky iPhone USB-C adaptor for the sleek 3.5mm to lightning. I found myself using the DB12 every day even though it was over 2 feet in length at 32 inches in total. It is not bulky though. The controls are at the short end where your headphones hitch up and the long part of the cord after the controls is high-quality braided. The extra-long cord made it nice to have my phone in my pocket. My wife even liked to use it from her purse. They made the cord the perfect length. The only drawback I found with the DB12 was the battery life. It is advertised to have 6 hours of battery life. On average I was getting 5 hours. Also, I would have liked to have some kind of battery life indicator. Every time I used it to its full potential, it just died with no warning. It is a shock to your system to go from high-quality sound to “normal” again. 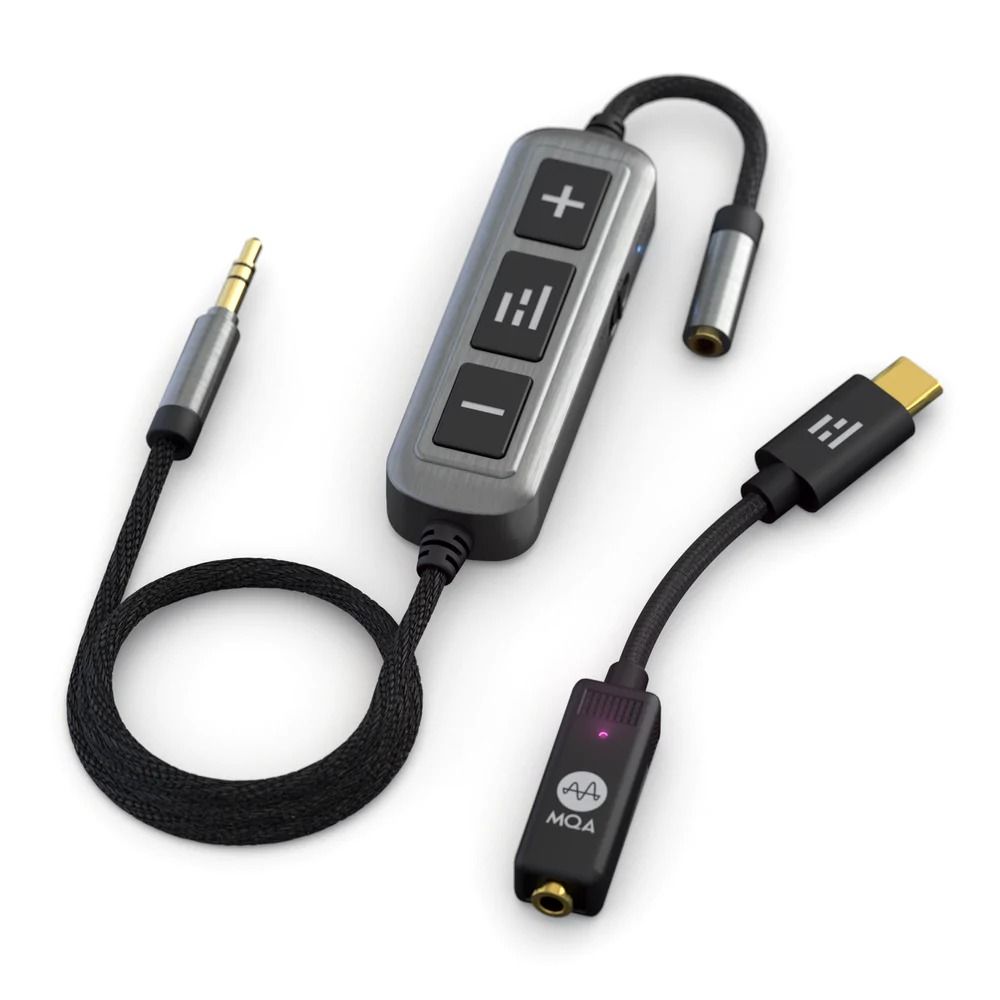 HELM Bolt and DB12 Together… Forever

My final thoughts on these two products is, are they worth it? If you are like me and love music, then yes they are definitely worth it. Right now they are almost half price which makes them really worth it. You won't find such high-quality THX certified and MQA-enabled mobile amplifiers at this price. If I had to choose between the two products I would take the DB12 AAAMP over the Bolt. While the Bolt is amazing and does what it should, the music streaming services are just not ready for it. Only Tidal takes full advantage of the MQA at a hefty price. The DB12 is a no-brainer to have. At first, I was just listening to the 12dB boost, but after analyzing the sound, I noticed everything was clearer and not just louder.

Not mentioned above, I also tested two other mobile amps that could decode HD and MQA. Both of those “cheaper” products were not THX certified. While they did bring HD and MQA sound, they were not on par with Helm’s offerings. Also for fun, I hitched the DB12 up to my PC with my Razer Kraken headset to test it in a non-mobile setting. The DB12 enhanced the sound of the games I played. From now on I’ll be using the DB12 on my PC to play games. The sound quality boost was that good! For double funsies, I hitched the DB12 up to my Fender Micro Amp to test out the sound of my guitar enhanced. Again, I don’t think I’ll ever use my guitar with a headset without the DB12. I could hear each note I strummed with clarity I never heard before. I could hear my skin touching each string in a seductive way, not an over-the-top annoying way. Life will never be the same to my ears.

As a self-proclaimed, novice audiophile,  I never knew I needed products like these. Now that my ears have been spoiled by all the sounds I have been missing. Even though the DB12 was the most “useful” to me, both products are amazing. To answer the age-old question: Are they WORTH it, though? My ears will never be the same.