Working from home this year has increased the need for protective eyewear ten-fold, especially if you tend to go from working all day at the computer right to your gaming setup. With the release of the 6-Siege Ash Edition Gaming Glasses, a fantastic unisex style based on the operator Ash from Rainbow Six Siege, there couldn’t be a better time to invest in your physical health. Of course, they look pretty sleek, but do they actually work? How do they feel? We were lucky enough to get our hands on a pair to answer these questions and more for you.

GUNNAR has been a leading provider of blue light glasses since they were founded in 2007. I’m not sure when I first became familiar with the company, but I distinctly remember seeing GUNNAR glasses just about everywhere at one point in time. Esports teams wore GUNNAR glasses and streamers couldn’t live without them. I didn’t have a job at that point, so I didn’t have the luxury of purchasing them for myself, but I remember the longing. Oh yes, I remember seeing the deep amber tint their glasses were known for and feeling my heart break when I saw the price. They can definitely be expensive, but their brand is known for quality and design. GUNNAR prides themselves on delivering a top-tier product that helps reduce digital eye strain- this is stated specifically on their About page. It’s a wonderful sentiment, and one that I was eager to test for myself. 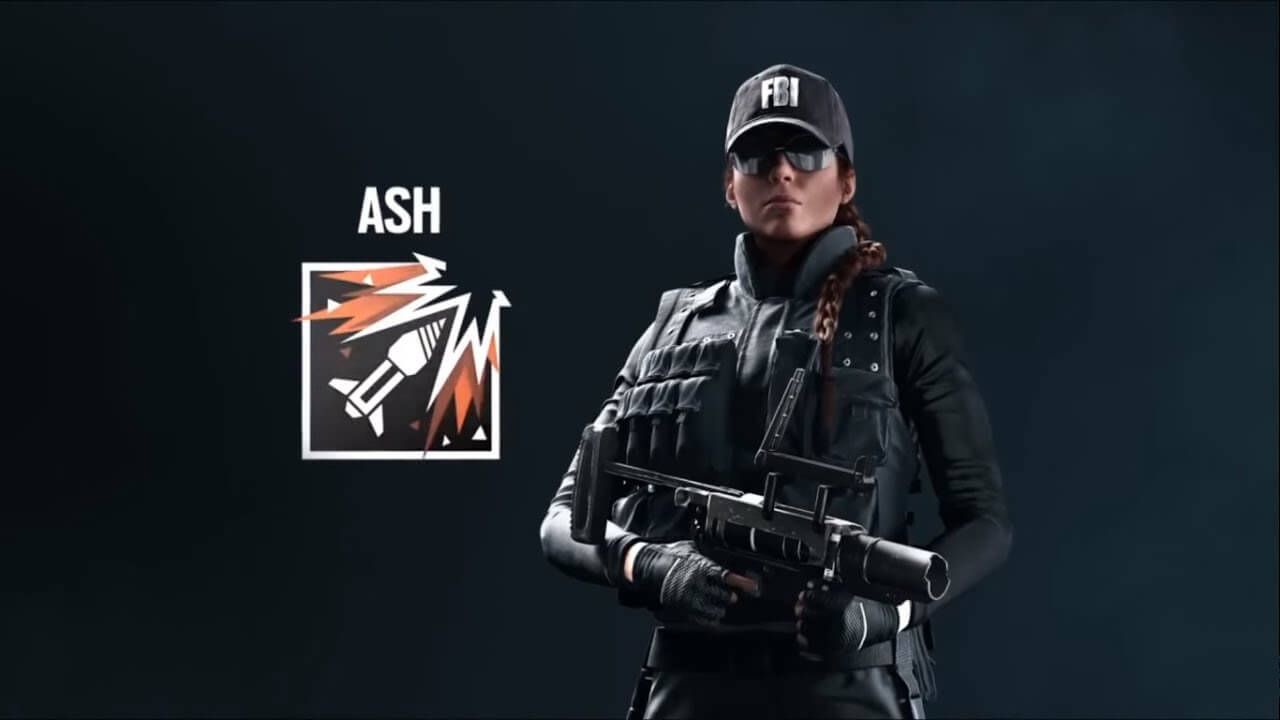 Before we get into how they held up, let’s talk a little about the aesthetic, and what makes this pair of glasses unique from the rest of the GUNNAR lineup. As you already know, these glasses were based specifically on those that Ash wears in the Rainbow Six Siege game, complete with the wide, rimless lenses and tight-fitting frame. There is no gimmick here, no symbols stamped along the temple. Were it not for the lighter tint, these look pretty much exactly like the glasses straight out of the Rainbow Six universe. When you purchase this particular pair, you’ll get a lot of branded goodies that are in my opinion just as exciting as the glasses themselves. 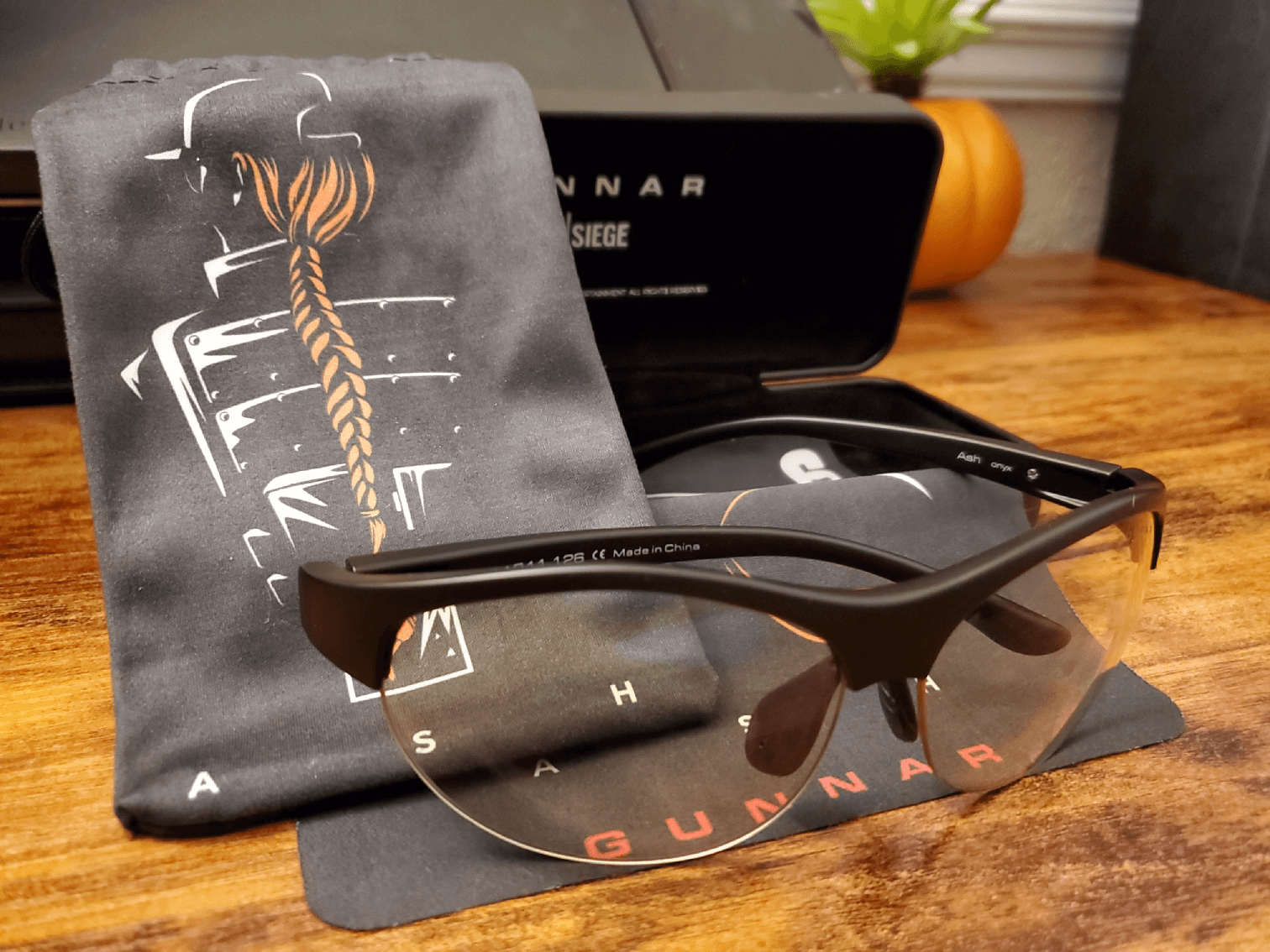 A fairly solid crate-like case is included, lined with a black felt and stamped with the R6 logo. I thought this was a nice touch, but the felt didn’t seem secured enough for my liking. I think it’s a combination of felt/plastic, that unfortunately cheapened the feel of the rest of the case. Inside, you’ll find the glasses neatly tucked into a microfiber drawstring bag, with a stunning illustration of the operative herself, and a nicely matching microfiber cleaning cloth. All of these fit snugly inside the case, which means there’s not a lot of wiggle room and your glasses should be kept snug and secure through all of your missions.

The 6-Siege Ash GUNNAR glasses take a little getting used to, especially if you typically wear prescription glasses, but they initially feel pretty great. I’m near-sighted, cursed from years of unprotected payroll office work, so I typically have prescription glasses to help with details and eye strain while I work. Though GUNNAR glasses do come with a prescription focus, these instead came equipped with a natural-focus. As I mentioned before, I’ve seen GUNNAR glasses around for years, but I’ve never been able to try on a pair for myself, so I was pleasantly surprised when I discovered that even the natural-focused lenses have some slight magnification to them! I could definitely see things slightly clearer by my monitor, better than I could have if I wasn’t wearing glasses at all.

Putting Them to the Test 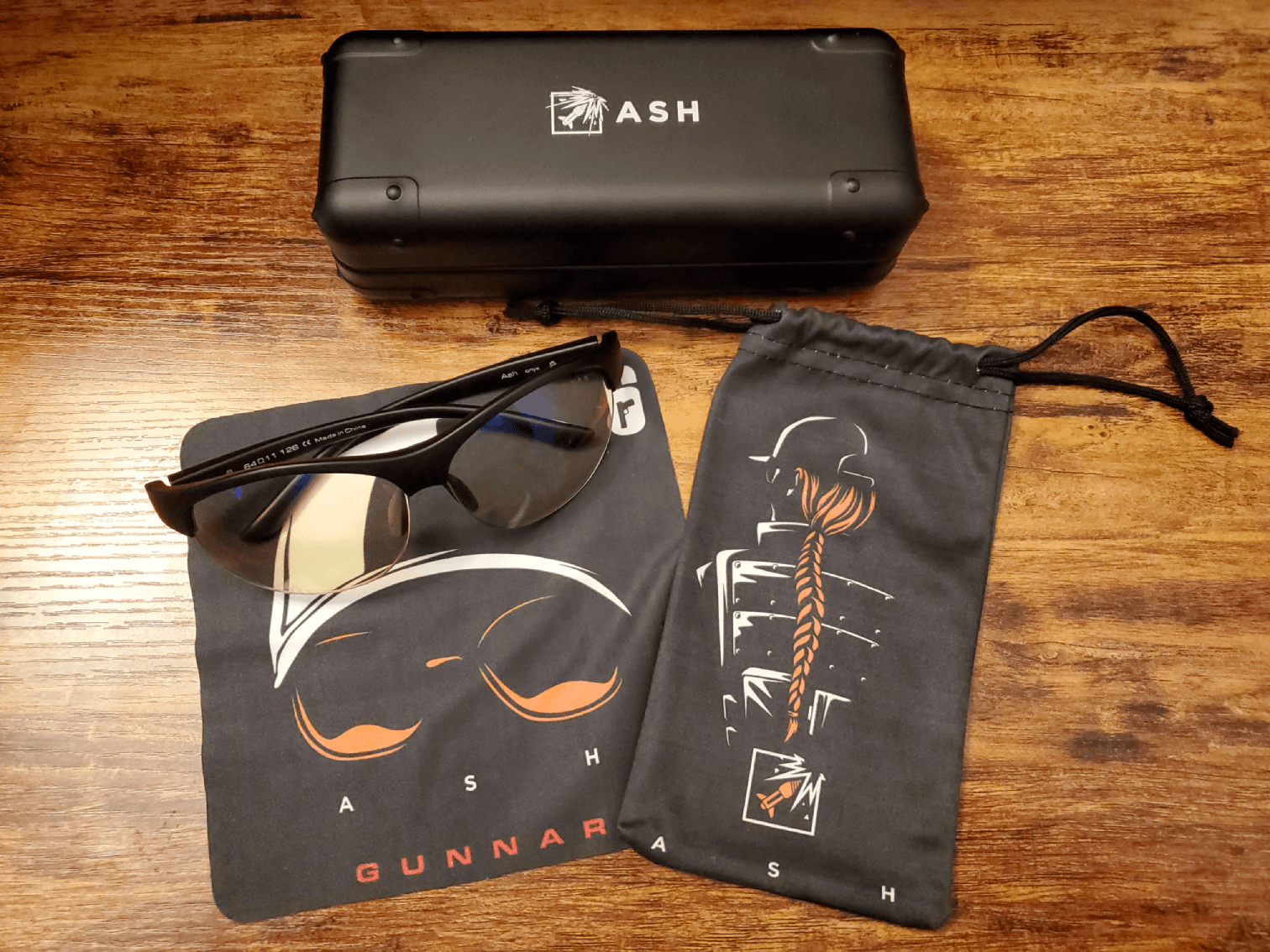 It wasn’t enough to just try them out a few hours at a time, though. I really wanted to break these puppies in and see what all the fuss was about. So, for 8 hours a day, I worked at a computer screen. For another equal 4-5 hours I gamed. And ashamed though I am to admit it, I probably spent a good 2 hours browsing my phone and watching Youtube videos before I passed out at night. At the end of the first 8 hours, I took my glasses off to clean them, and good lord- it was like staring at the sun. I wasn’t aware of just how bright my monitor was normally, and that kind of put some things into perspective for me. No wonder my eyesight had degraded over the years. Had I really been doing this to my eyes for over a decade, constantly, without giving them any kind of protection?

The size of the lenses, combined with the fit of the frame, actually come together to provide a pretty snug fit. Maybe, just a little too snug, or maybe I’m just used to ill-fitting, loose glasses.

At first, I thought the nose might be a little snug as well, but it turns out-they’re adjustable! After squeezing them a bit, I was able to find the perfect fit. I also noticed that the little grooves that were supposed to hold the glasses securely on your nose were a pain in the ass to clean makeup out of. The microfiber cloth was great for the lenses, but you’d have to put in a little elbow grease if you wear any kind of foundation or concealer. 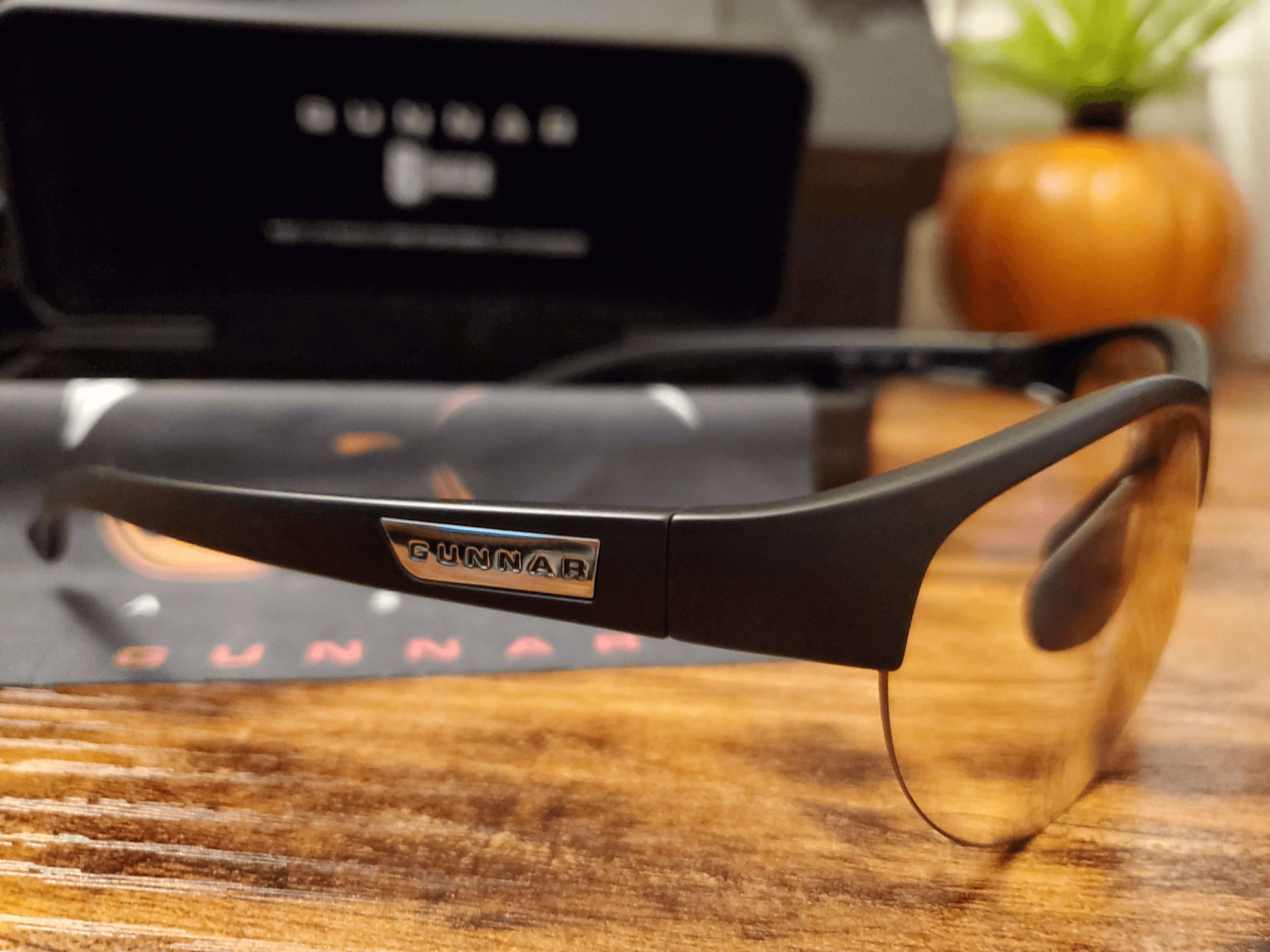 The only feature that gave me issues outside of the nose was the temple after prolonged use. They might just take a little breaking in, as well. For the first few hours, they felt great, but at the end of the night, after a long day of wearing them, I did start to feel a little discomfort around the temples. They probably shouldn’t have been worn for as long as I did, but I really and truly wanted to see how long they could hold up.

Next up,  as the gaming trial. Gaming with the 6-Siege Ash glasses was actually pretty nice, because of the rimless lenses. There was barely any part of my vision that was exposed to light outside of the lenses. It was so seamless in fact, that at times I completely forgot that I was wearing them. I didn’t see the nose bridge, or the rim of my frame, so it was almost like they weren’t there, but the benefits definitely still were. Typically, around this time, I’ll get a mild headache from staring at the screen all day, but I was still going strong. No pains or aches, and no fatigue. 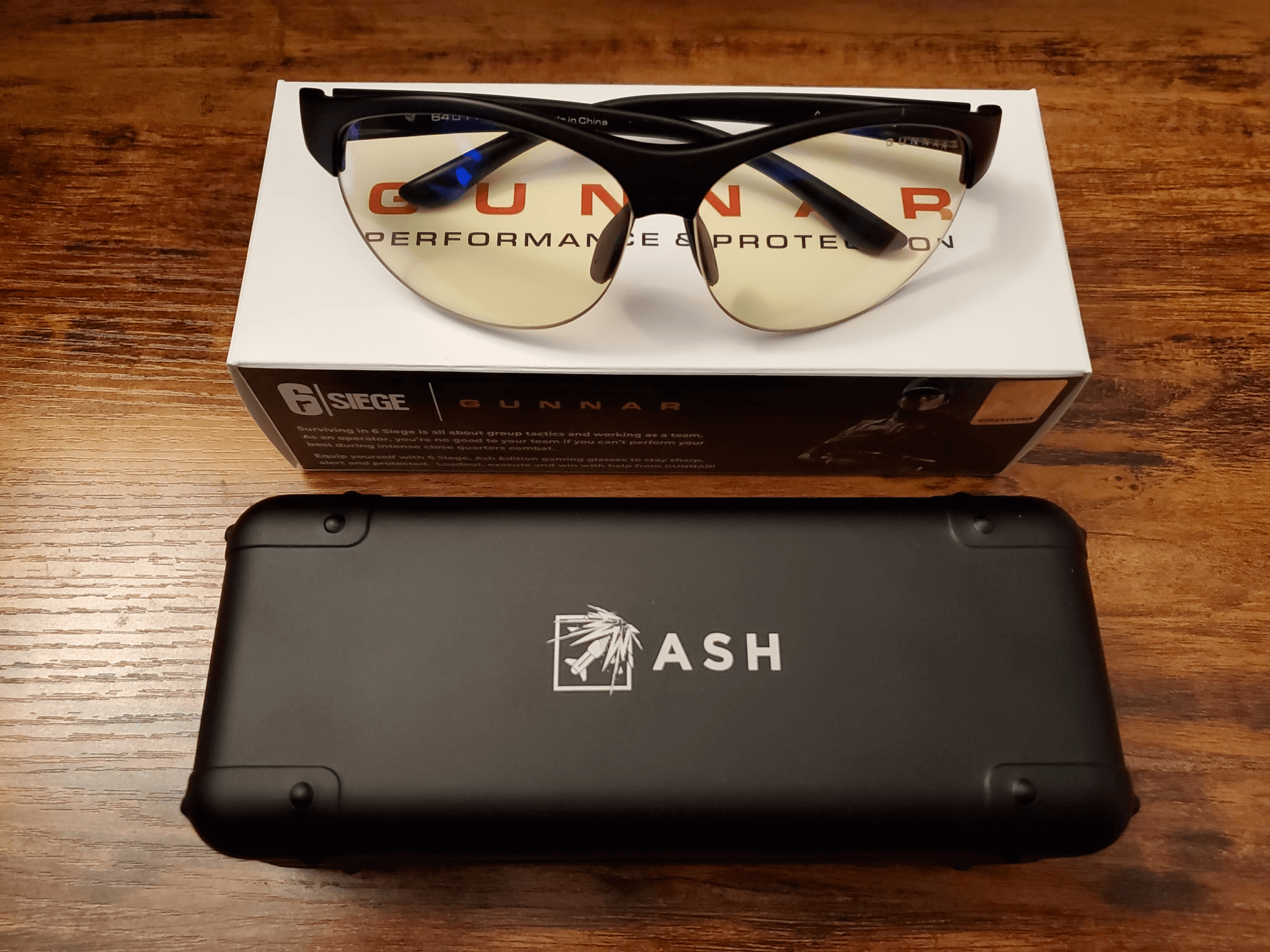 Falling asleep was easy, as well. I definitely suffer from self-induced insomnia from how much I stare at my electronics, but I felt like I was actually able to shut down after a long day and keep my eyes closed; instead of laying there, staring at the ceiling because my eyes just won’t wind down and stay shut. I either read, or watch videos on my phone before falling asleep, and the blue light combined with a need to continue a good story often do me in. The blue light protection from the 6-Siege Ash glasses, however, definitely did their job, because some nights I found it really hard to keep my eyes open to finish a chapter. I was actually able to tear myself away, and get some rest for once.

So, are GUNNAR’s 6-Siege Ash Edition Gaming Glasses worth it? For me, absolutely. I’ve felt more refreshed and productive than I have in a long time while wearing them, and absolutely love the style. The glasses case and drawstring art are badass bonuses, featuring an even more badass operator. The style of glasses is actually labeled as unisex, and provides a uniquely branded set of tools for the Rainbow Six Siege fan to combat eye strain. I personally really like how the rimless lenses look, and was surprised to see that GUNNAR doesn’t have many rimless glasses in their current catalog to choose from. If that’s your style, and you want to show off some Ash love, definitely give it a try. Heck, even if you aren’t a Rainbow Six Siege fan, they look pretty awesome, and the sleek, black theme blends in with every style and outfit.

The product described in this article was provided by the manufacturer for the purpose of review.
8.0Great
Pros
Cons
Tags
gaming glasses