Gamakay, which appears to be the new brand name for Womier, is back again with its latest RGB keyboard, the Gamakay K77. It features a four-layer frosted acrylic case and more RGB LEDs than it has keys to light up your desk. At $69.99, it’s only a few dollars more than Womier K66 and even cheaper than the TKL K87. Let’s see how it stacks up! 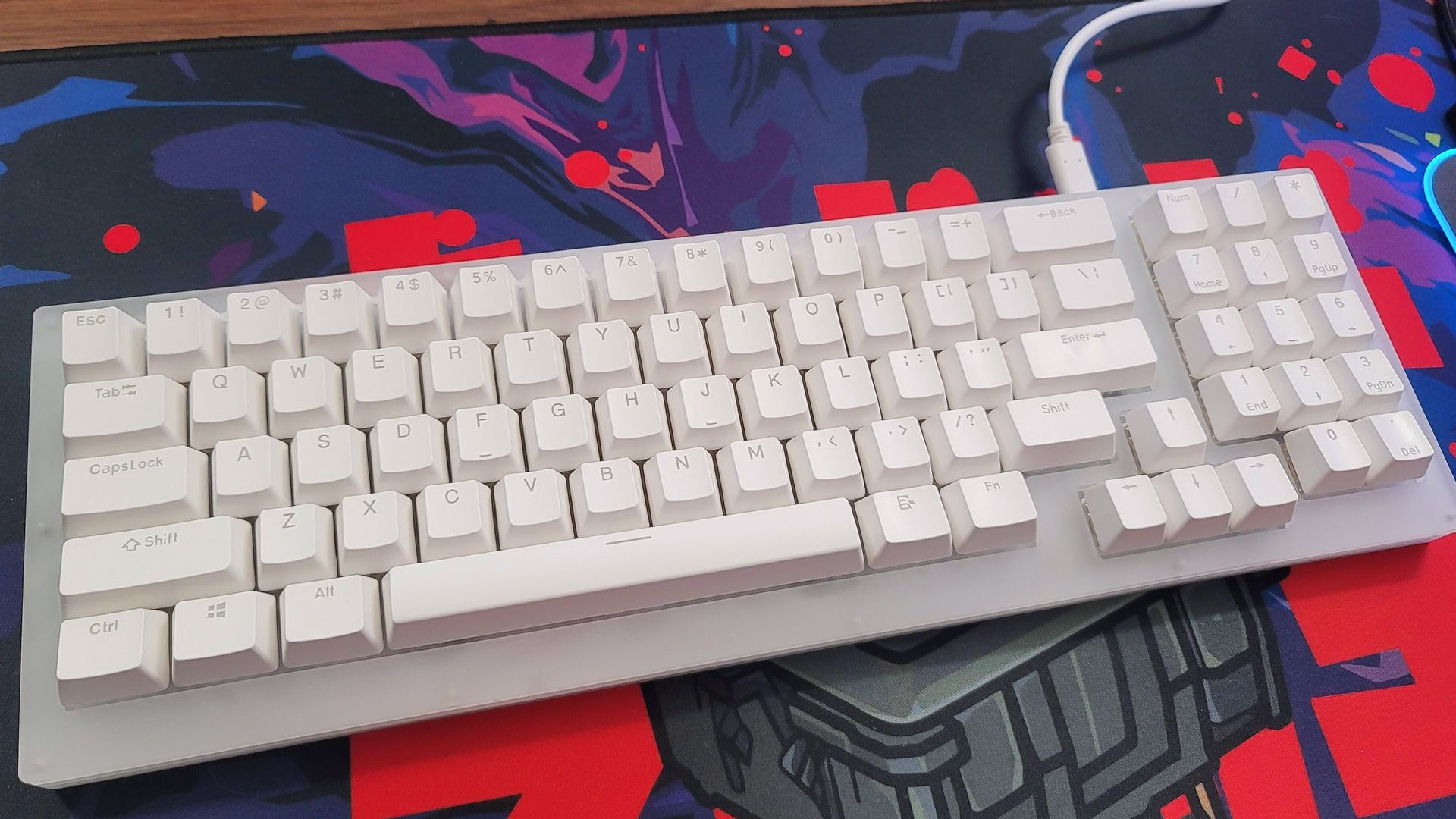 The Gamakay K77 isn’t an understated keyboard. It’s compact, but it’s anything but minimal. In fact, it’s the opposite of minimal. 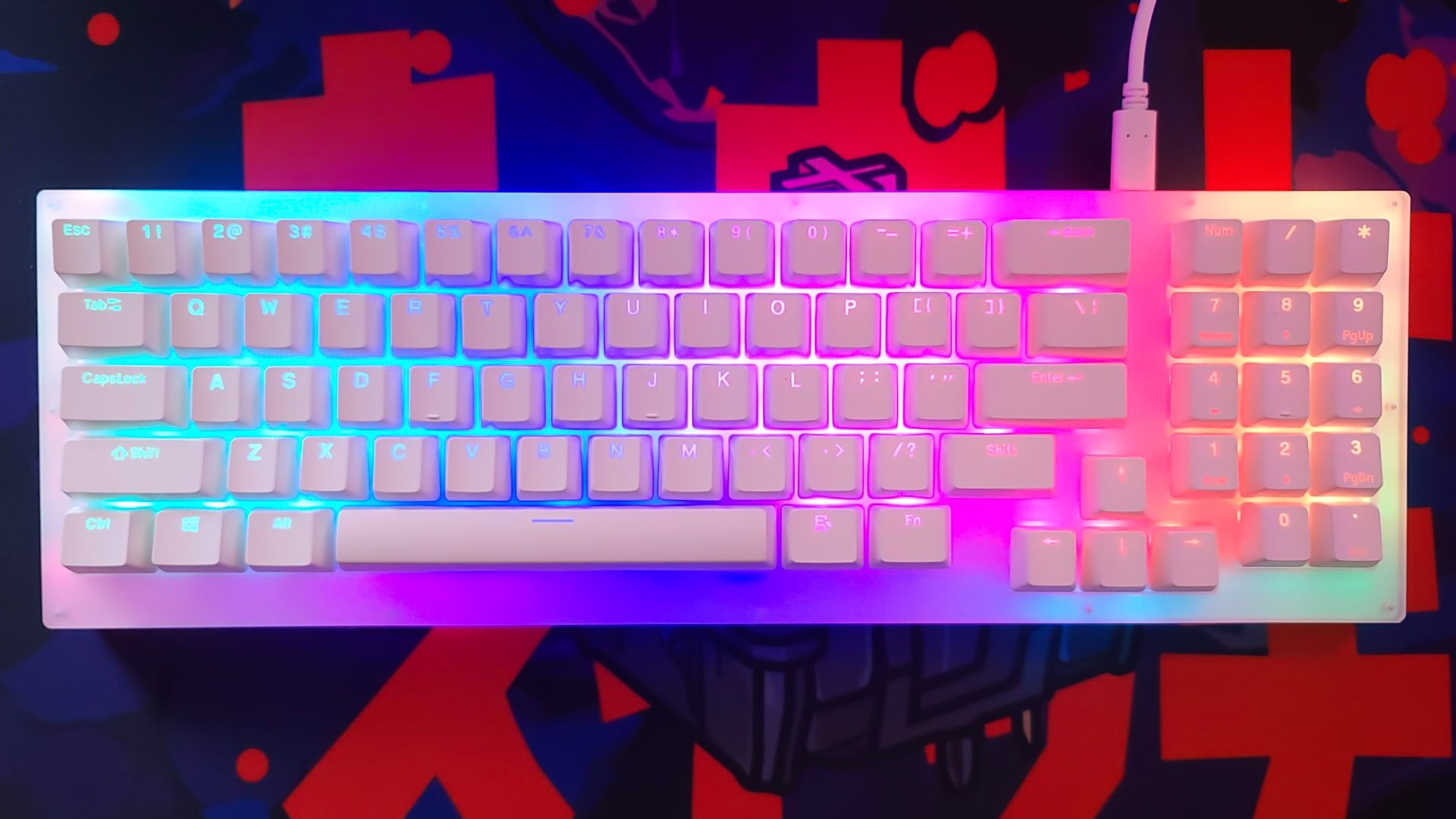 The case on the K77 is made of four layers of stacked frosted acrylic. It features RGB LEDs on both the top and bottom and illuminates the whole case. Just like the K66 and K87, this isn’t a board with RGB backlighting. This is an RGB keyboard in the truest sense of the word. This kind of design is divisive by nature, but the Womier keyboards have developed a cult fanbase.

Why, you might ask? Well, even though they’re not the only keyboards that light up this way, they’re some of the best looking when they do it. The combination of heavy frosting on the acrylic and top and bottom LEDs (43 on the bottom of the board alone) makes the lighting effect full, vibrant, and well blended when viewed from above. The bottom two layers are more lightly frosted, so you can see some individual LEDs. But when most of the competition only lights the case with the switch LEDs, the effect just isn’t as good. 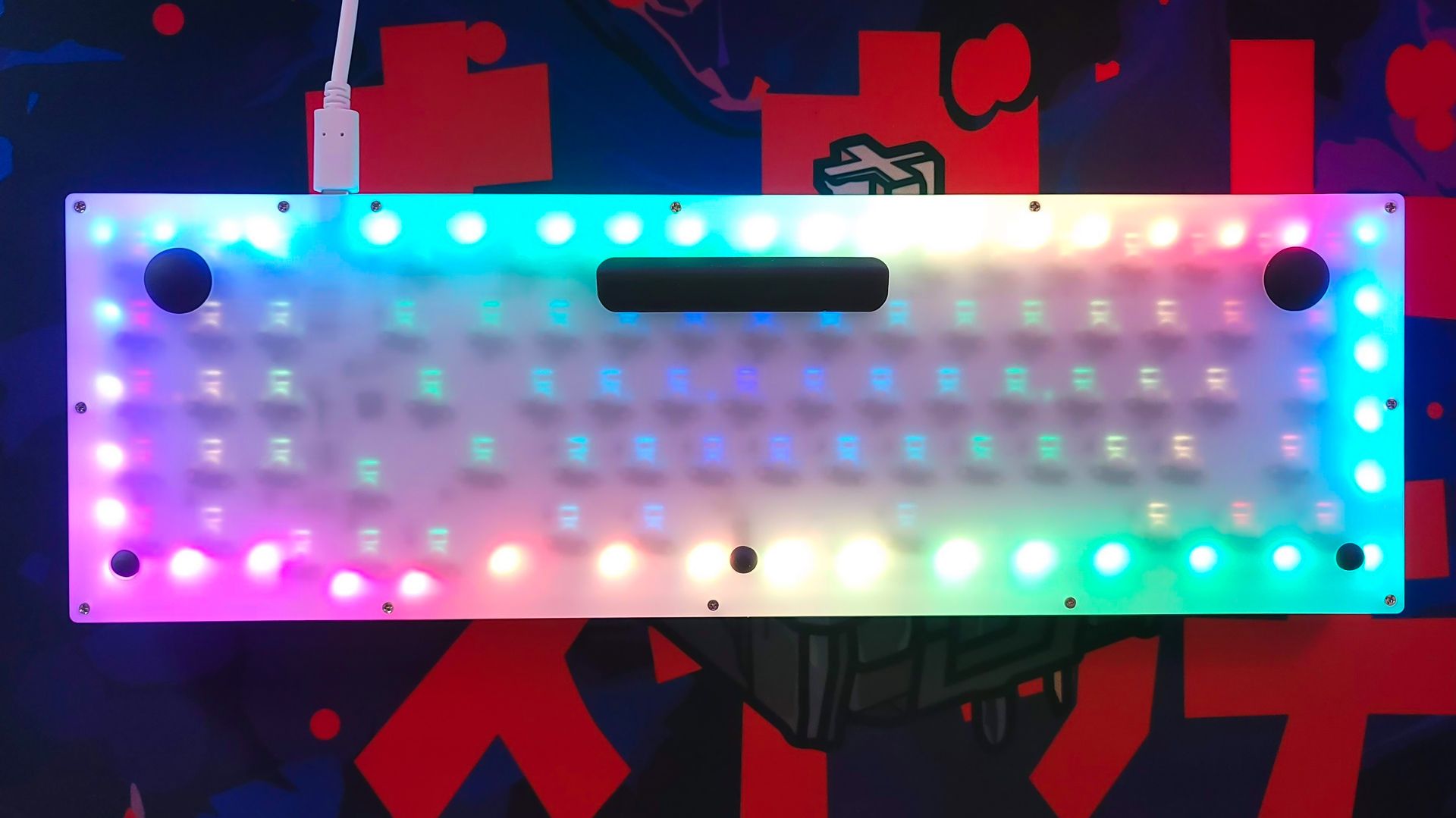 Just, don’t go in expecting a whole lot more than that. The K77 has 18 preset lighting effects. You can control brightness and direction and swap between eight key colors (17 at different brightness levels if you use the palette option), and the rainbow effect. There’s a good mix of lighting animations and reactive typing. The case lights can also be set independent of the key lighting; however, there’s only four effects: rainbow, breathing, static, and spectrum cycling. It’s limiting, but enough to achieve a good blend with any of the preset effects under the keyset. The keyboard includes a tiny amount of online memory to remember your lighting effect after unplugging it, though.

Here’s a look at the keyboard lighting in action:

The keyboard itself is compact and uses only 77 keys (less than a TKL) while still including most of the number pad. There is no function row or navigation and editing cluster. Instead, F-keys are accessed along the number row while holding the function button. Turning off Num Lock turns 1, 3, 7, and 9 into Home, End, Page Up, and Page Down. The numpad is trimmed down to just the numbers and ./* keys, with plus, minus, and enter residing on the normal key set. This layout is mostly functional but lacks a Print Screen button for snapping screenshots (the Windows Snip tool will have to fill in here).

There is no software (that I could find, at least), so advanced programming is out. If you’d like to remap keys or program macros, you’ll need to turn to AutoHotKey. For gaming, it does support N-Key Rollover, so a full face-roll is possible when you need to pull out the secret sauce for a Fortnite win. 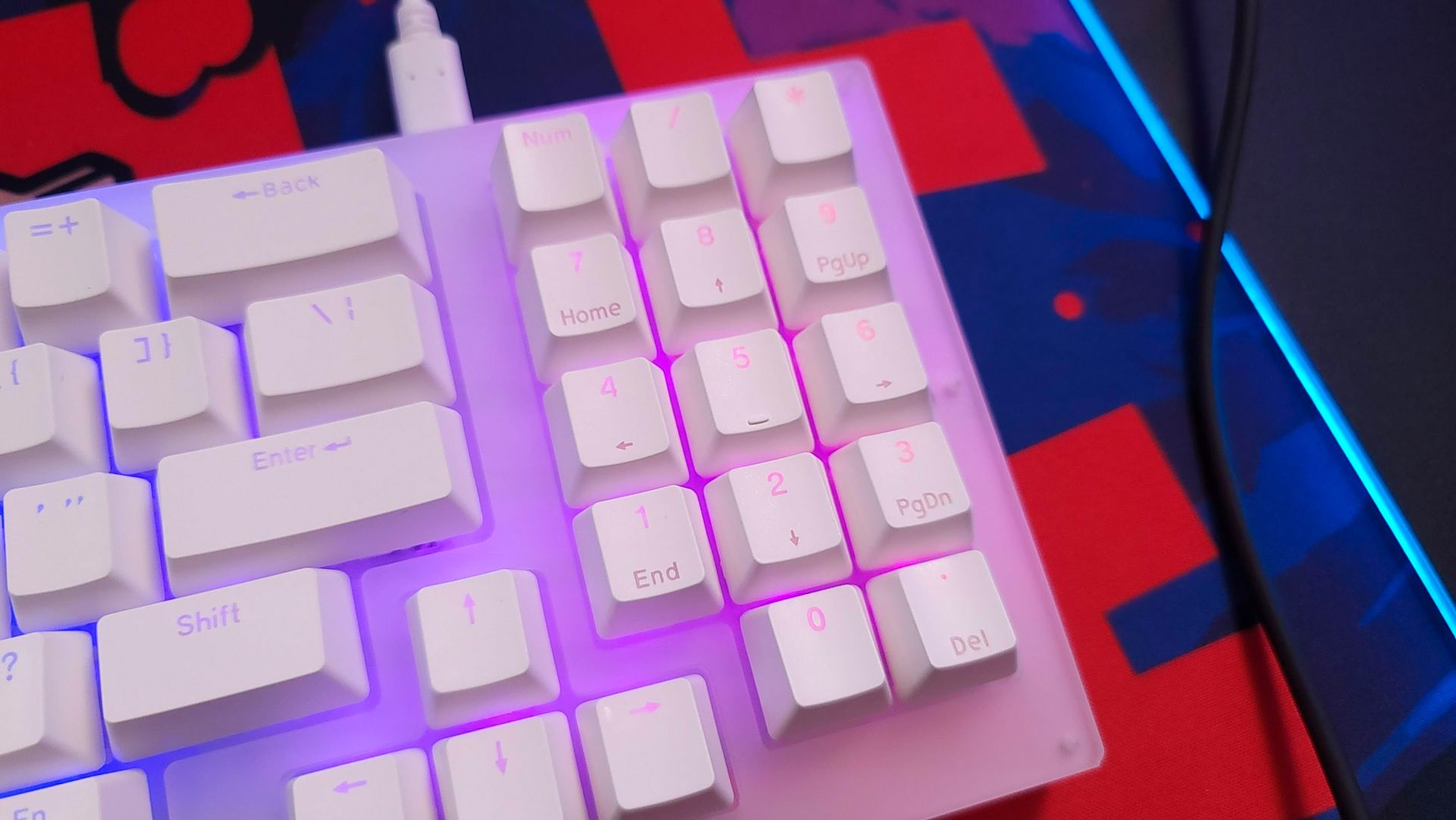 The out of the box typing experience is only fine. The keycaps are doubleshot ABS but very thin which gives typing a very lightweight, insubstantial feel. The stabilizers are also terrible; loose, rattly, and lubed only enough to say they did (is that a brush stroke I see or just a scratch in the wire?).

Thankfully, the keyboard has a few qualities going for it that really help mitigate this. First, it’s pretty cheap. At $69.99, you’re paying for the RGB, not the excellent typing experience. I, and many mech keyboard fans, consider a board like this a starting point and I would encourage you to do the same. Second, it has hot-swappable switches, so you can add your own — but, it comes with Gateron switches, including Gateron Yellow linears, so changing them is purely optional. Finally, since it’s hotswap, improving those stabilzers isn’t difficult.

This is how I modded mine and made it much better. First, switches. I chose to order the board with Gateron Yellows, which are a smooth linear that’s regarded as one of the best budget linear switches on the market. Since the keyboard only cost $69, it didn’t make sense to spend three hours lubing switches, so I did “lazy lubing,” pressing the stem down and inserting a drop of Super Lube along each side to lubricate the rails.

Disclosure: I’ve heard this can make a mess of the PCB but using only a small amount, I’ve never found this to be the case. This is one of my go-to moves for cheap review keyboards to improve the typing experience. Just don’t over-do it. 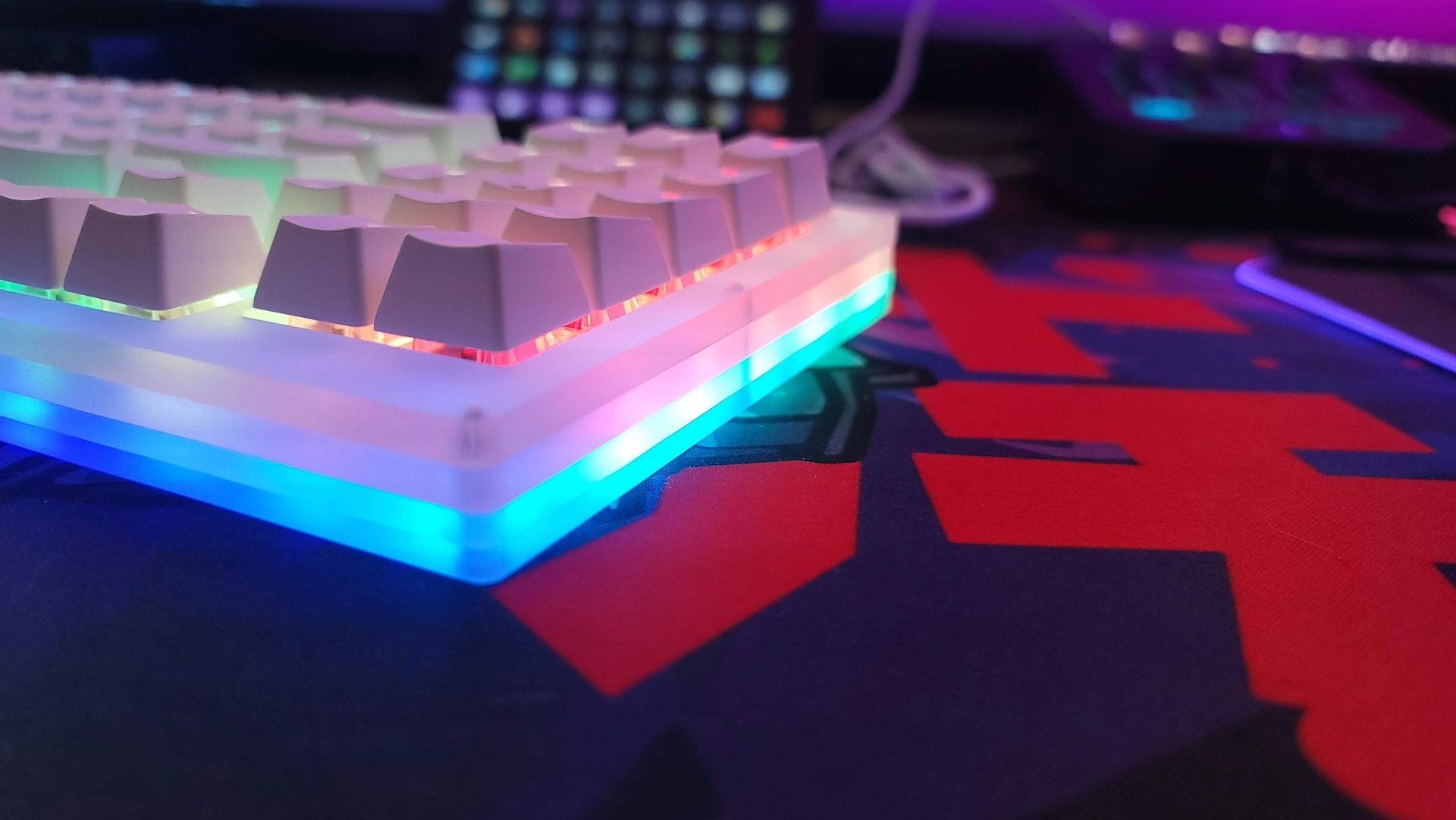 Next, I pulled the stabilizers out and performed a few quick mods to get rid of the rattle. First, I glued squares of medical self-adherent cohesive tape under the stabilizers to cushion the bottom out. Then, I clipped the feet and dipped the wires in Permatex dielectric grease before reassembling.

The result is a massive improvement. The keyboard is quieter, smoother, and more consistent. I would put the typing experience against other premade gaming keyboards any day of the week.

The Gamakey K77 is a decent keyboard that can be made very good with the help of a few simple mods. The RGB is outstanding and the addition of a numpad makes the K77 one of the most functional options in the company’s line-up if you’re also trying to get some work done. It desperately needs software for custom lighting schemes and gaming functions, but for $69.99, it’s a solid option if you put the time into at least modding the stablizers.

The product described in this article was provided by the manufacturer for evaluation purposes. The links included in this review are affiliate links; however, they are included as required by Banggood for product sampling. Authors at MMORPG.com do not receive affiliate commission and are not paid by click.
7.0Good
Pros
Cons
Tags
Mechanical Keyboards
gaming keyboards
Gamakey
Womier
Banggood