Laptop productivity is oftentimes limited by its form factor. While laptops themselves can be incredibly useful to work on the go, whether it’s for a meeting or on a work trip (remember those?), they can also leave plenty of users feeling limited by their design. The biggest hindrance to productivity, at least for me, is the single monitor setup that laptops provide.

This is simply due to the nature of the device. But with more and more of us using multi-monitor set-ups for work (whether it’s to keep an eye on Google Trends and Analytics on one hand while still being able to write on the other — or whatever the case may be) using a laptop could be a roadblock. Thankfully, more and more companies are stepping up to try to find a solution to that core issue: portable monitors.

Portable monitors themselves are nothing new. However, what if you could buy a setup that turns your laptop into a three-display productivity king? Enter the FOPO Triple Portable Monitor, bringing two IPS 1080p screens to the table to flank your laptop’s standard screen, recreating the desktop experience you’re used to on the go.

Right out of the box, the folded design of the FOPO laptop monitor stood out to me. The two monitors flank an extendable bracket, which goes over the laptop screen itself. Each display folds outward from the middle bracket and are positioned alongside it; however, the folded design leaves some to be desired.

The whole kit folds like a compressed “Z”, with each separate monitor folding outward from a different direction. Because of how it’s folded, one screen is always exposed, making it possible to be easily damaged when transporting in a bag and whatnot. This is helped a little by the screen protectors included in the box, but it doesn’t protect it from something hard striking the screen while it’s folded.

The actual construction of the extender doesn’t feel cheap, thankfully. While the housing is plastic, it doesn’t feel like a plastic that I could easily bend or break unless I was really trying. This makes it feel like it’s able to withstand some damage, but I wouldn’t try to test this theory. 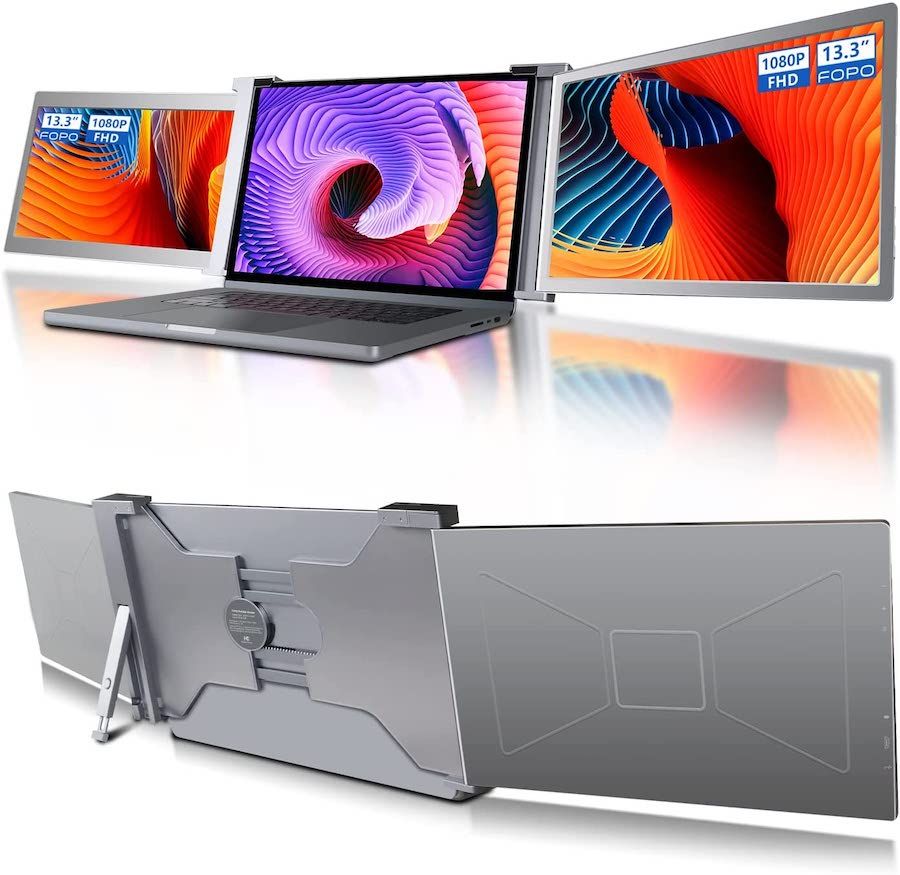 Connecting the laptop, though, can be tricky if you don’t have the right I/O. While my Dell laptop has a USB-C connection, it’s not one that can carry video. Additionally, it only has one HDMI port, meaning that, at best, I could really only use one side of the extender.

Thankfully, I have a hub specifically to get around this. While I still don’t have any USB-C plugs that could take a second monitor, I didn’t need them. FOPO has older laptop users covered with any type of connection you can think of. The USB-C to USB-A cables came in handy here, powering each of the displays while the hub gave me the extra HDMI port I needed to complete the set-up.

I really appreciated the amount of I/O on each display, as well as the fact that FOPO ensured that the cables included would allow for any user to potentially take advantage of the set-up.

How’re the screens, though?

The biggest concern I had was whether or not the screens themselves would be any good. And I’m incredibly happy to say that they are. The two IPS panels have rather surprising brightness and clarity, making each object on the screen look as clear as day.

I also appreciate that each screen can have its brightness adjusted independently, meaning I could easily adjust each to fit perfectly with the lighting of the room. The IPS panel also helps ensure that the screens look fantastic at most viewing angles, guaranteeing that however you set it up, you’re going to get the best viewing experience possible.

This is assuming the extender fits snugly over your screen, something that mine didn’t.

My laptop, unfortunately, is a 13” display, which is a bit small for the S16 model Extender we reviewed. This doesn’t mean it’s unusable - far from it - but it didn’t feel as stable as it could, The kickstand in the back helped, but because the extender wasn’t a snug fit around the monitor itself, I always worried an accidental kick to the legs of my desk or table could see the whole thing collapse.

Thankfully, that didn’t happen, even when I did accidentally hit the table leg while using this in an extended session. Despite being a tad big for my monitor, the whole thing held up admirably, impressing me quite a bit. 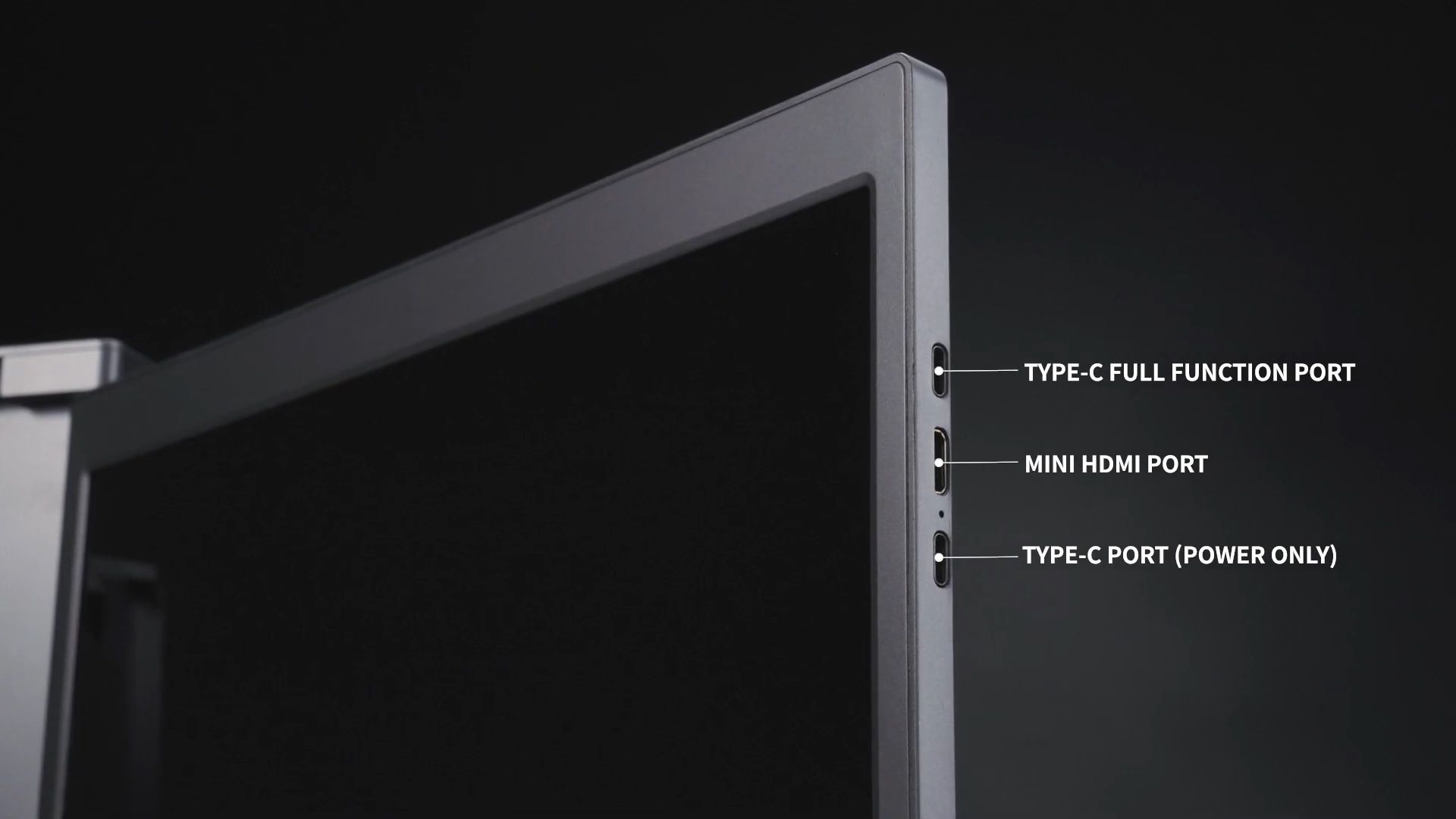 The side I/O of each display is impressive as well with two USB-C connections, and a mini HDMI port. The USB-C ports can be used to carry video as well as power the display itself, which doesn’t exactly require any outside power either.

However, you’re probably going to be using the extender with your laptop plugged in because these displays chug power.

Since the main way your screens will be powered is through your laptop via USB, you’ll want to ensure you either have a beefy battery or a power outlet nearby. The FOPO screens do come with a power adapter, but that can complicate what is already a pretty wire-heavy set-up. Since each screen will use one USB for power, and in many cases require a separate cable for video (unless you have a more modern laptop with video and powered USB-Cs), you’re likely running two cables from each into your laptop (or in my case, powered hub). This uses a lot of power, and while the benefits are great, they, at least in my experience, didn’t last long.

Obviously, your mileage here with battery life will vary - it’s really dependent on the watt hours of your laptop, but it’s worth noting the best use-case is when you can plug the machine in too.

However, extending my laptop displays made my productivity skyrocket. There are times where I need to just get out of my office to work, yet when I do I feel so unproductive due to things being a bit slower in my workflow. Where I have multi-displays at my office desk to help me organize windows and move from one thing to the next easily, my laptop sees me contending with alt-tabbing and generally moving at a slower pace. 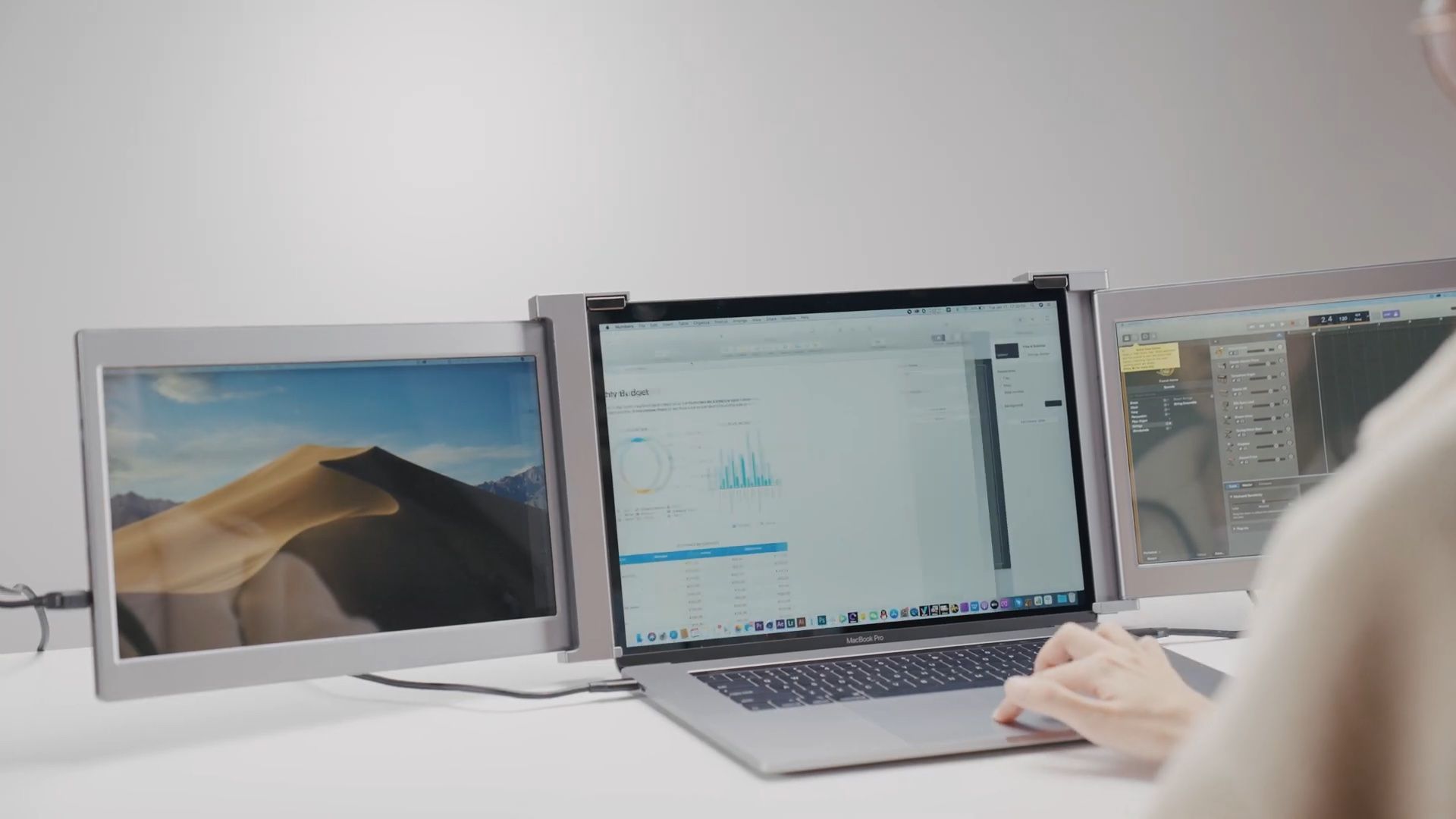 So by adding two more displays into the mix, I felt just as productive at the coffee shop as I did at my desk for once. And it was glorious.

And it’s not just work, that these screens can help with. Got a gaming laptop and fancy extending your game area across three screens? If your machine is powerful enough, you can do that — technically Going to stream to your Twitch channel while on the go and need a display for your console? You can devote one screen to your gaming machine while the other two monitor your stream health and chat.

Because the FOPO Portable Laptop Monitors are essentially plug-and-play, you don’t necessarily need to use them on just your laptop. This expands productivity and your use case for them beyond just the simple laptop extension. And that’s great, because the price tag for these isn’t cheap.

At $549, these 13.3” displays are expensive - much more money than you could spend on two standard 1080p displays. And if you’re only going to be using your laptop at an office desk, those make more sense. What these screens offer is portability. They are light, and when folded can fit in a standard laptop bag, though I would take care to protect the exposed screen when traveling. However, if you’re looking to simply extend your displays on a work laptop in the office, I can’t really recommend these over cheaper, standard 1080p monitors.

So, it really comes down to whether or not the goal is to increase productivity on the go. While it was nice to be able to set up at my favorite coffee shop and feel as productive as I was in my home office, it’s not necessarily the most convenient of set-ups. Though that could also simply be down to the limited I/O of my older Dell laptop. Because the FOPO displays are able to simply be powered and displayed using USB-C, if you have the right laptop, this isn’t much of a hassle at all.

It also isn’t a huge deal that you might need to remain plugged into the wall while using these, since more often than not when I’m at a coffee shop or elsewhere I have my charging cable anyways.

Compatibility will be an issue for some. FOPO warns that the displays aren’t compatible with the M1 Mac or the Surface Pro, but the company has a complete list of compatible laptops on their Amazon listing to ensure users are able to decide whether or not this will work with their set-up.

In all, the FOPO Triple Portable Monitor is a great package. The screens themselves are the highlight. They are crisp, clear and easily adjustable to the perfect viewing angle. They also don’t feel cheap, which is a huge plus especially when portability is a selling point.

However, when folded they seem to have a fatal flaw with one screen always exposed. I worry that this could make it easy for that display to get damaged when even just stowing it in a laptop bag in transport. The sheer amount of I/O allows for a myriad of laptops to work with the display, though it can be annoying to deal with all of the various wires required to get it to work on older models.

That said, when everything is set up, the FOPO monitors are a dream to use, exponentially increasing my productivity. They are bright, clear and, even on a smaller laptop, incredibly stable. The cost might be high for some, especially if your laptop never actually leaves your desk. But if you’re looking for a way to increase your productivity, give your laptop more digital real estate, or even just a portable monitor to game on every once in a while, the FOPO Triple Laptop Monitor isn’t a bad look.