It’s been more than two years since the release of the original Fiio FH5 and fans have been hungry for an update. Well, the wait is over and we have the brand new FH5s in our hands. Coming in at $279, this new earphone features a four-driver hybrid design, a dragonscale-themed semi-open back shell, custom tuning switches, and a modular cable. Let’s take a closer look and find out if it lives up to the hype.

The Fiio FH5s is the successor to the popular FH5 which was released back in 2018. The FH line is Fiio’s series of hybrid earphones, each carrying a blend of dynamic and balanced armature drivers. While many popular consumer headphones sold in the United States rely exclusively on dynamic drivers — conical drivers similar to what you might find inside a desktop speaker — the FH line-up leveraged the strengths of both driver types, splitting up frequency responsibilities between the array in pursuit of the most appealing sound.

The “s” in FH5s might not make it seem like this is a completely new entry in the series, but it is. The original FH5 also used four drivers but instead of three BAs and one dynamic driver, the FH5s use two of each. The low end is handled by a large 12mm dynamic driver while mids are covered by a second 6mm dynamic driver. Each of these is beryllium-plated to enhance their speed and detail abilities. The second half of the frequency spectrum is covered by a pair of Knowles balanced armature drivers. To prevent the loss of detail, Fiio has positioned the set directly into the nozzle of the earphone, physically closer to the ear. The new architecture, they claim, aims to enhance soundstage and atmosphere. 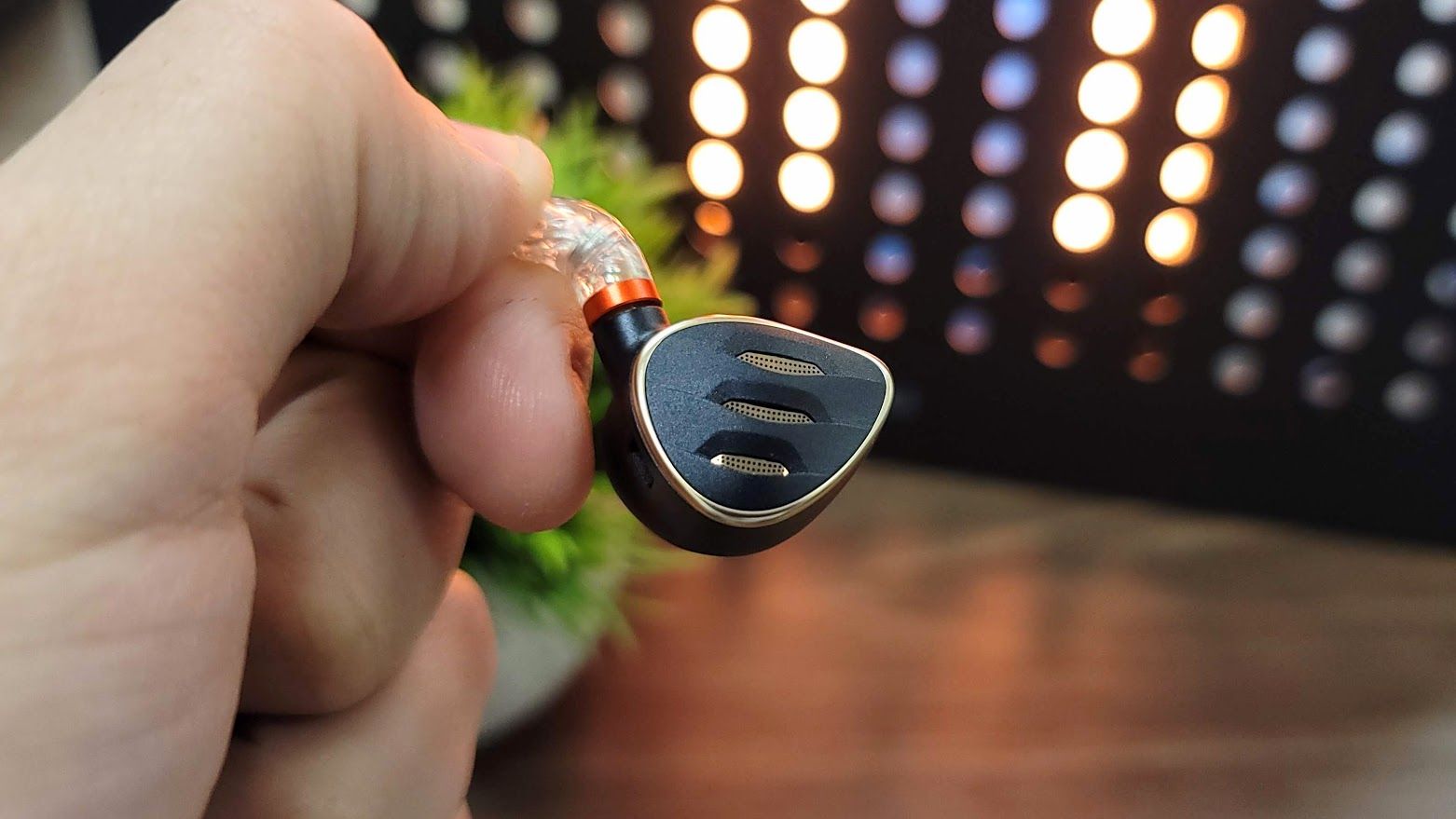 The physical design of the earphones is also quite different. The earphone now features a semi-open back design similar to the FD5 (reviewed here) to relieve pressure from sealed ear canals and expand soundstage. The outer shell has also been decorated with a dragonscale pattern that I find incredibly cool. The earphones also come with Fiio’s new Litz Type-2 silver-plated modular copper cable. It’s nothing short of beautiful to look at and features innovative modular ends. Rather than need to invest in a new cable to connect to a balanced amplifier (something which isn’t necessary but you may want to do if you’re already an audio enthusiast), you simply unscrew and unplug the pre-installed 3.5mm end and then plug in the termination you’re looking for. Included in the box are 2.5mm and 4.4mm balanced ends and a standard 3.5mm single-ended connection.

If there’s one thing Fiio nails, it’s presentation. The FH5s arrived in impressive packaging. The outer sleeve pulls off to reveal a solid cardboard box that unfolds to reveal the earphones and the leather carrying case on display in foam cutouts. Beneath that is an accessory package with plenty of tips tailored for different sound signatures: vocal, bass, and reference, as well as three pairs of memory foam tips and a single pair of bi-flanges. All told there are 12 pairs — a lot by anyones’ standard — in addition to an MMCX removal tool and a combination cleaning brush/tuning switch selector.

The earphones themselves are made of metal and have decent heft to them at 8.8 grams each. That said, they stayed put in my ears well, so the molding is well done for a universal fit IEM. I am just enamored with how they look. In a world where everyone and their brother is making resin IEMs with colorful shells, these really stand out and calls to my inner geek with the dragonscale, black and bronze theme. The included cable is also gorgeous. In look and feel, the FH5s are some of my favorite earphones ever.

I’ve spent the last week living with the Fiio FH5s and find them very comfortable. They fit in my ears well and don’t cause any sore spots, even after multiple hours of wearing them. The mesh backs under the grills effectively remove pressure and reduce fatigue over time. The earphones are medium-sized and have fairly wide bores, so users with smaller ears may find them to be a bit too large. My left ear canal is a bit smaller than my right, so finding the initial fit required pulling my ear back to properly seat. There were no fitment issues otherwise but your mileage may vary. 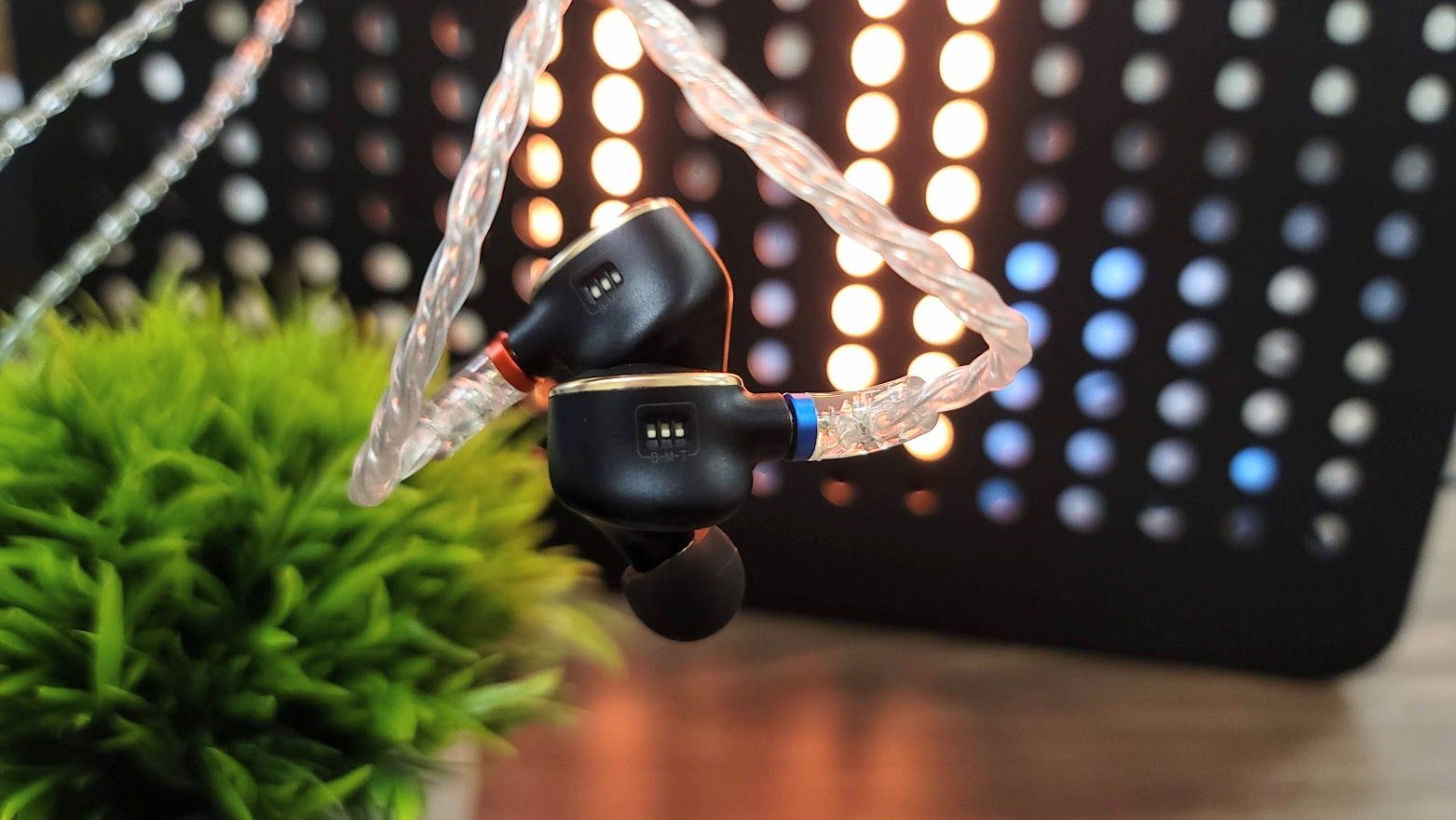 When it comes to the cable, Fiio used pre-formed ear hooks. As a glasses wearer, this isn’t my preferred design. The molding was well done but forced me to remove my glasses any time I needed to take them off or the earphones would slowly unseat themselves.

We come to it: the real bread and butter of any headphone review — how do they sound? Well, for my music and entertainment, great, but perhaps more than many other headphone choices at the moment, that might be a bit divisive. The FH5s’ are a fairly bright headphone, so high frequencies come through louder and are more present than I was used to. That means cymbals, high hats, and electronic percussion are louder in the mix. I rarely found them harsh with only a few exceptions which I’ll get to soon. Here is the stock frequency curve as posted on Fiio’s website: 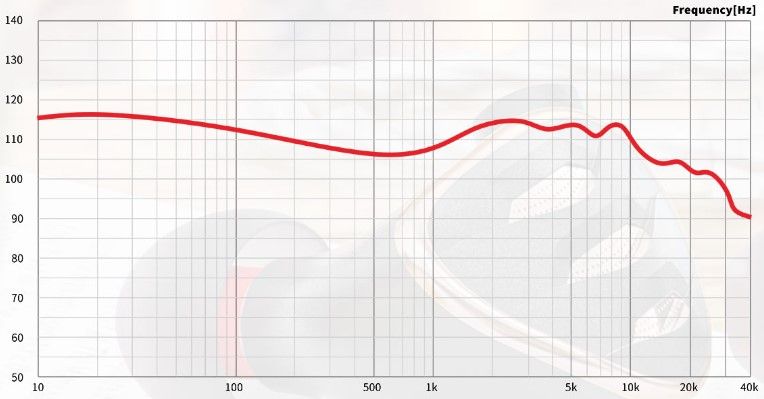 As you can see, they have a solid u-shaped tuning with a roll-off that begins at about 9kHz. To my ear, that removes a lot of the harshness that might arise from the elevated treble preceding it. That said, there were a couple of cases where the balanced armature in the nozzle did lead to some harshness. Certain female vocalists at loud volumes sounded shrill and big cacophonous moments where multiple cymbals were being hit back to back could elicit a sharpness I attribute to the balanced armature being in the nozzle. Both of those situations seemed directly linked to volume, however, and were a good reminder not to listen at the dangerous levels I had been.

Let me be clear, I’m not saying I couldn’t listen to these headphones at loud volumes. I have a bad habit of listening too loud, but it was in these moments of pushing them too far where some of that treble peaking would show itself. Listening to a mix of rock, metal, hip hop, and electronic chillstep and ambient, they were great 99% of the time but it’s worth bearing in mind that a slight EQ adjustment might be in order if you’re sensitive to higher treble.

With that out of the way, I have to say the FH5s might just be my favorite IEM of the year so far. Despite their brighter sound, the low-end is excellent. Bass is tight, textured, and detailed even without the bass switch enabled. The FH5s’s have excellent punch and can thump when the music or game calls for it. Listening to my chillstep mix was a lot of fun because of the interplay between the bass response and the higher percussion being drawn up in the mix.

The earphones are detail monsters for the price. Listening to music was a lot of fun with these because they really highlight the tiny nuances in what you’re listening to. Atmospheric details like reverbs and delays have realistic tails that done fade or clip prematurely. Guitar tones have excellent texture, even when overdriven. As a guitar play, I have a keen ear for being able to hear the detail within washes of gain and multi-effects, and the FH5s definitely punch above their class in detail retrieval. 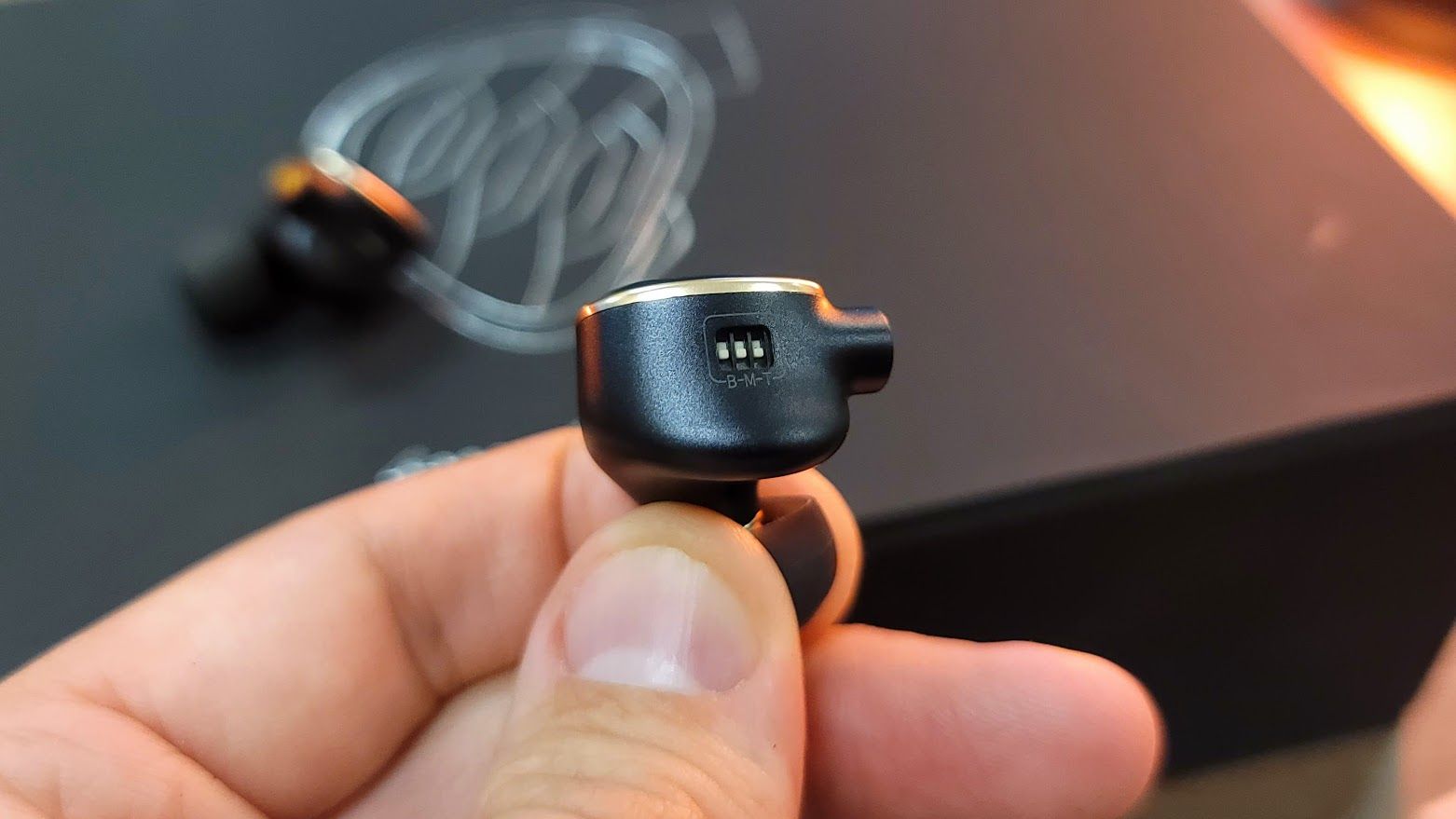 Around the back of the earphones, you’ll find three custom tuning switches for bass, mids, and treble. Ticking any of these into the up position enhances those frequencies. In my experience, these switches usually don’t make much of a difference but, to my surprise, even though the differences were small, I could actually hear what each was doing. Since they’re already a bright set, it didn’t make much sense (for me) to spend much time with the mids and treble ticked but I did leave the bass turned on after my initial round of testing. The stock sound signature is already “fun” but with the added bass, it made rock and electronica even more thumpy and enjoyable.

The soundstage and imaging is also very good. The semi-open back design has a definite impact on the sense of space and atmosphere while listening. Covering them up with a finger causes an instant contraction in the sense of space. This does mean they bleed more sound but it’s minor, and I was able to use these in an office setting without bothering others. For gaming, the added space also enhances your immersion in the game. I also found that these were the only IEMs I preferred for microphone monitoring and allowed me to hear my voice much more naturally in my own ear. They’re not at the level of a good pair of open-back headphones but are a definite upgrade over a traditional earphone.

Soundscape and imaging are good but don’t quite rise to the level of the Fiio FD5. Compared side by side, the FD5 provides a deeper soundstage and a better sense of separation between instruments and audio cues. The FH5 does a good job overall but everything feels slightly more close in comparison. For my music and game library, I definitely preferred the tuning and detailed presentation of the FH5s, however.

The only real downside is the cable does create microphonics when it rubs against clothes. If that’s a new term to you, microphonics are the sounds that travel up the cable and into your ear when it rubs against clothes. If you’re sitting still, it’s not an issue but if you like to bob your head or plan to use these when out for a run, you’ll, unfortunately, want to look for a different cable. 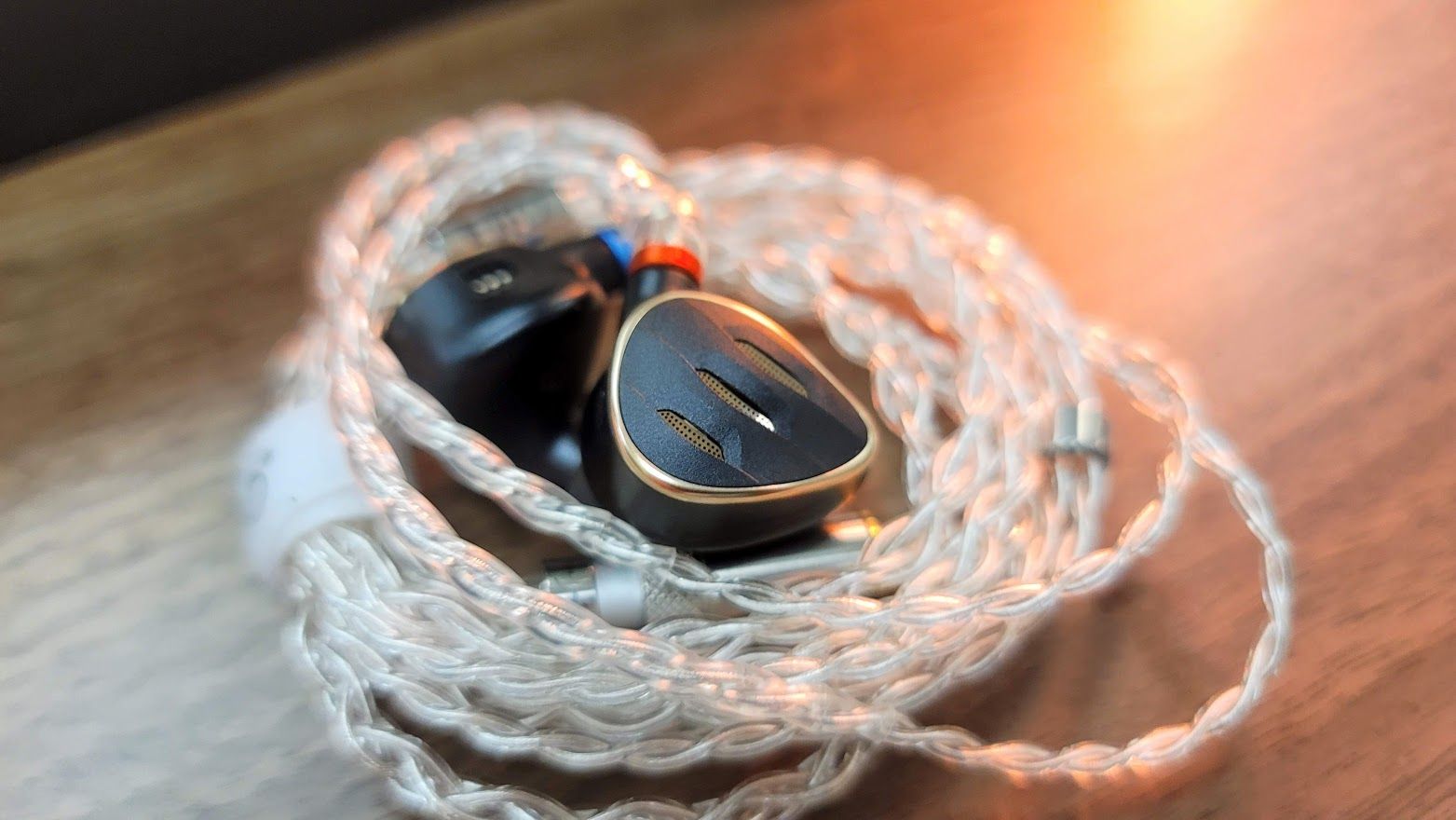 Despite microphonics on the cable and infrequent sharpness at high volumes, the Fiio FH5s remains one of my all-time favorite earphones. The detail, tonality, and sound signature seem almost custom-made for my tastes. The brighter signature won’t be for everyone, so be prepared to EQ if you’re treble sensitive, but I would highly encourage anyone curious to give them a listen for yourself. Between the bass thump, detail, and atmosphere, I found these to be a joy to spend time with and are an easy recommendation to make.